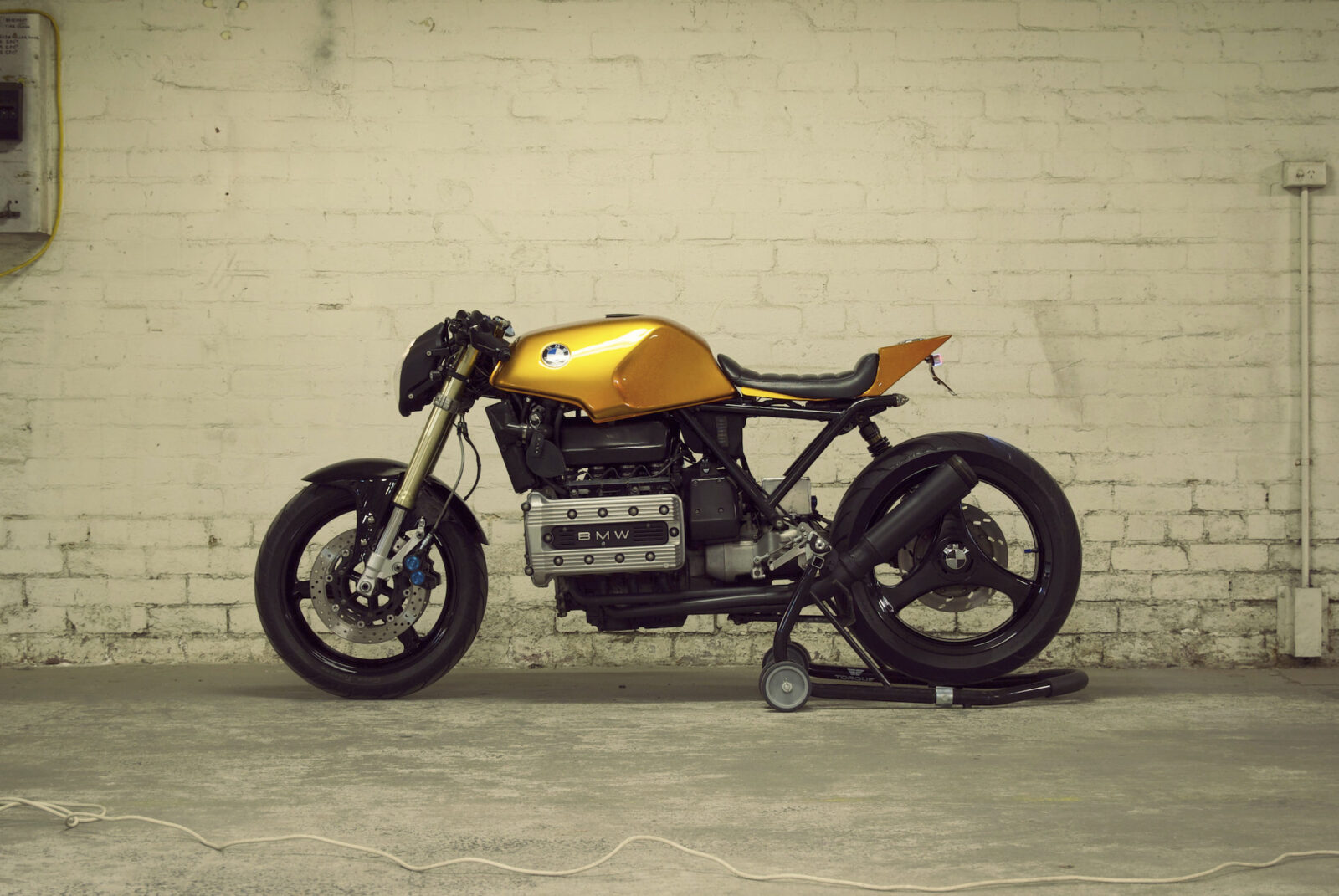 The BMW K100 has long been a personal favourite of mine, I can’t help but love an underdog and a motorcycle fitted with an engine originally designed for a small Peugeot motor car certainly qualifies as an underdog. Especially when it’s dropped into the market to compete directly with the Honda CB750 and other 4-cylinder superbikes pouring out of Japan in the late-70s and early-80s.

In the 1970s the engineering team at BMW Motorrad faced a Japanese motorcycle boom largely based around exceedingly powerful 4-cylinder bikes, the British, American and Italian motorcycle manufacturers were all struggling with the same problem – namely, how do you compete with reliable, powerful, well-engineered and fun to ride motorcycles that are being sold at a price point lower than even your own cheapest offering?

The team at BMW knew they needed to find a 4-cylinder engine with approximately a 1000cc capacity, they also needed to keep costs as low as possible so developing an entirely new power-unit wasn’t feasible. They eventually settled on a 987cc straight-4 built by Peugeot, they decided to lay the engine on its side and by laying it longitudinally they avoided having to add a 90 degree angle between the direction of the crankshaft and driveshaft.

Once the new model was released the team at BMW Motorrad sat back and waited to see what would happen. This was a company famous for building boxer-twin, air-cooled motorcycles and some were concerned that the purists would be furious over a water-cooled straight-4. Initial sales were fairly slow however people quickly warmed to the new BMW and over the course of the model’s life, it would become highly respected and would change the public perception of what a BMW motorcycle could be.

Up until recently we hadn’t seen very many K100-based customs, then all of a sudden they started slowly appearing with each looking more extraordinary than the last. The model is sometimes thought of as being boring so it’s been fascinating to see how wildly varied the custom versions have been – the Australian K100 you see here was built by a former F/A-18 Hornet pilot with a penchant for BMW motorcycles, engineering and travelling very, very quickly.

After being inspired by Robrock’s K100 he had seen on BikeEXIF Paul decided he wanted to have a crack at the K100 as well, so he did some research and settled on a bike he found 1600 kilometres away in Adelaide.

The first thing he did was strip off the fairings, seat, instruments and foot pegs, he then sold the lot to a wrecker so there’d be no going back. Paul then set about the internet to find the parts he needed, a Dakota digital dash replaced the stock instrument cluster and when viewed as part of the finished bike, it fits the theme perfectly.

Once Paul had finished the bike he took it out for some shakedown testing on a nearby race track, he quickly noticed that at speeds in excess os 170kph the bar-end rear vision mirrors would fold in due to aerodynamic pressure, he replaced them both and the problem was solved. Although personally, I’m not entirely sure how much time I’d spend looking in my mirrors at 170+.

Before long Paul’s friends were allowed to have a go on the new K100 and in a moment that was both sad and fortuitous, a good friend of Paul’s lost the front end and low-sided the bike in a corner. Rather than throw his toys out of the pram, Paul set about rebuilding the wrecked bike that he’d bought back from the instance company. The front end was a right-off so somehow, he managed to figure out how to install the front end from a Yamaha R1 onto a BMW K100. A special triple-tree had to be fabricated and there was much wailing and gnashing of teeth throughout the whole process, finally and through what I assume involved some high level of black magic, it was all installed and working properly.

The finished bike has an impressive side-profile, it looks almost like an official BMW concept motorcycle designed to invoke the spirit of the classic K100 – an idea that BMW would be wise to wholeheartedly embrace. Paul tells me that the bike handles remarkably well thanks to its new, more modern front and rear suspension and significantly reduced weight, apparently it has no problem keeping pace with his K1200R – which is an achievement unto itself.

We’ll be staying in touch with Paul and will be sure to bring you any future motorcycles he chooses to build. He clearly has a talent for it, so it would be a shame if he stopped here. 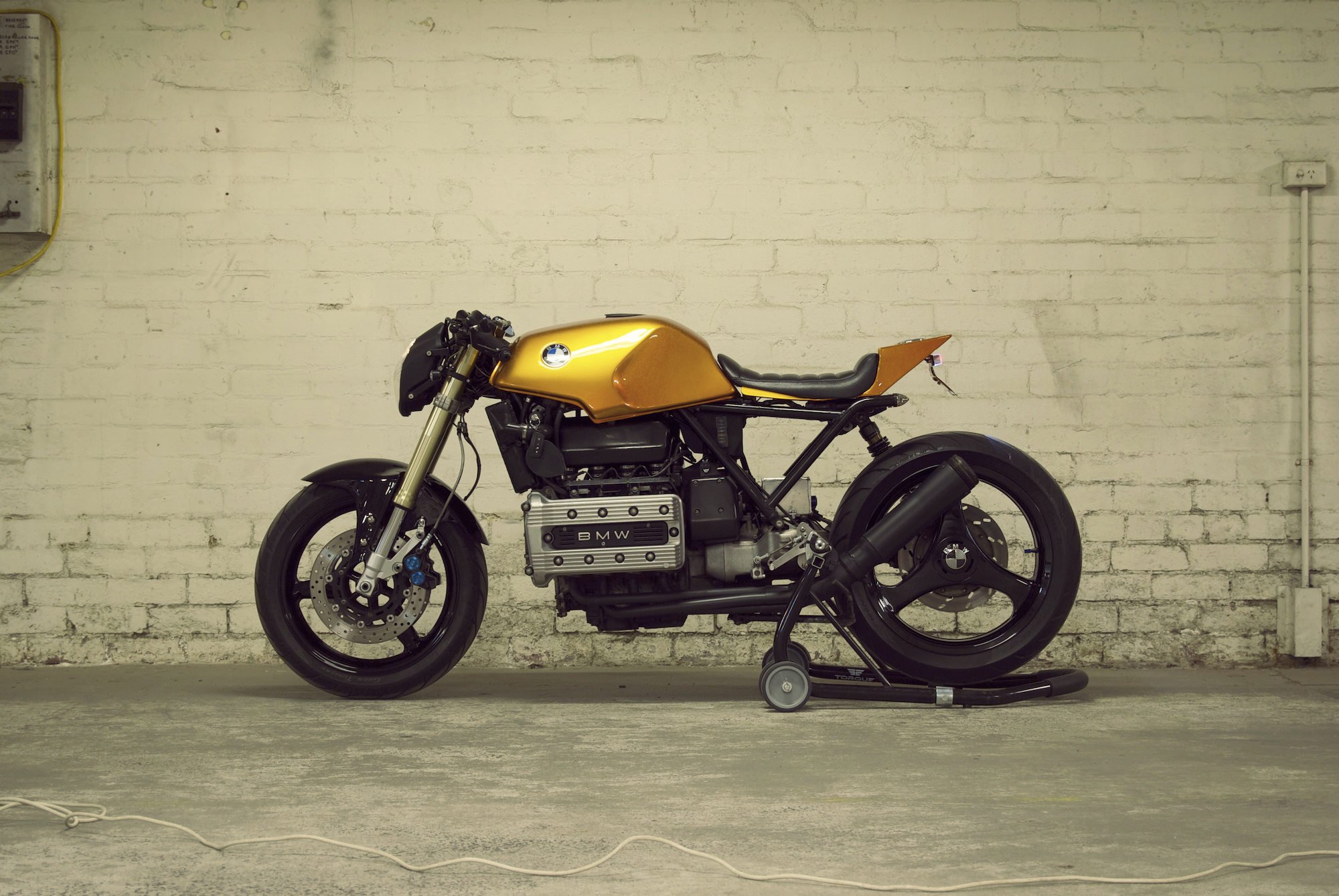