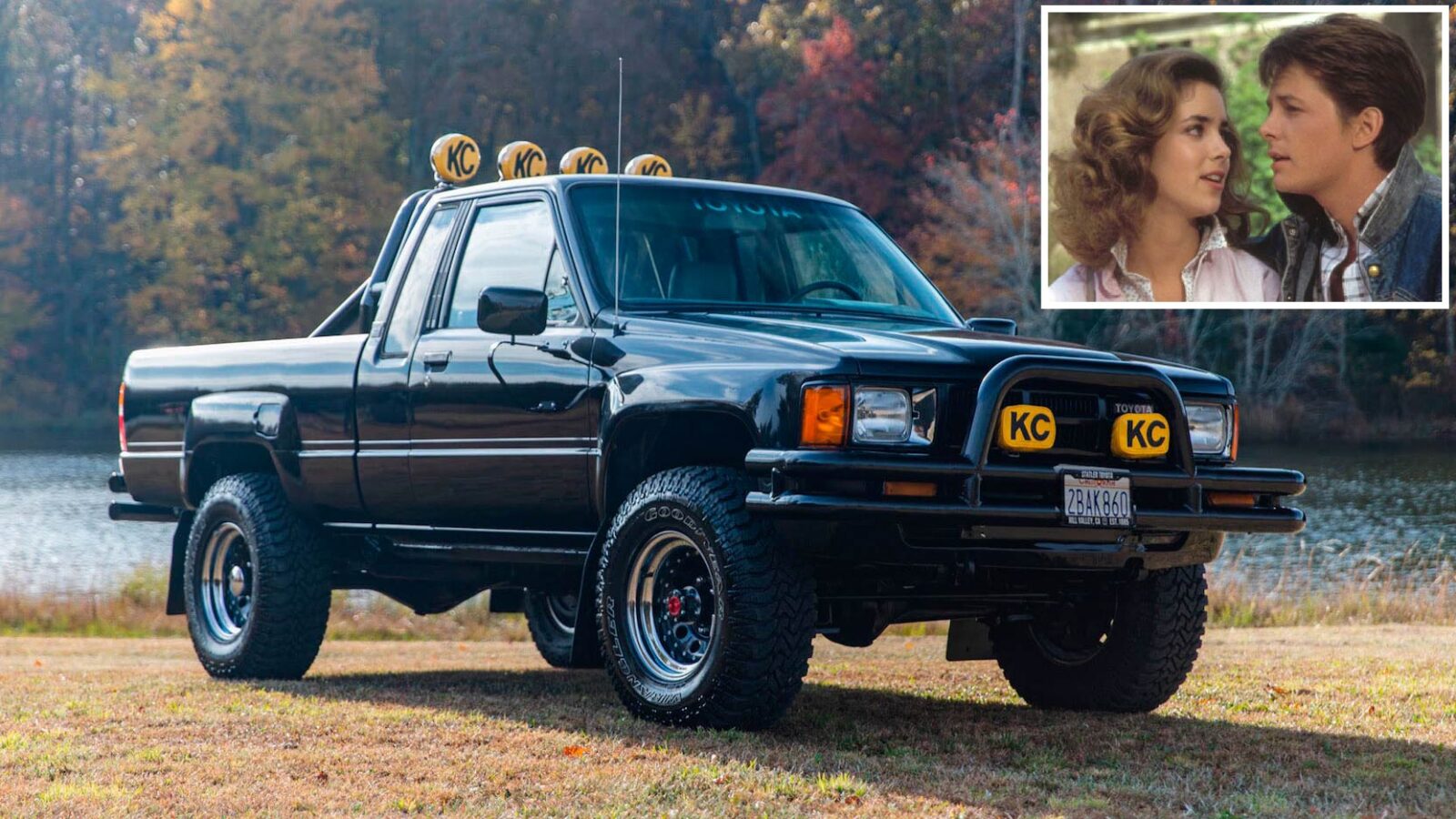 The jet black 1985 Toyota SR-5 from Back To The Future, with its yellow-capped KC Daylighter spotlights on the roll bar, has been a car lusted after by countless millions of viewers since the first film in the trilogy was released in the mid-80s.

The DeLorean DMC-12 has always been the main star of the series of course, but given its relatively brief appearances on screen the SR-5 left a lasting impact on many and helped the humble Toyota Pick Up become an icon.

“Back To The Future” And A World Famous Toyota Pick Up

When President Ronald Reagan watched Back To The Future with his family in the White House in 1985 he’s said to have loved the scene where Doc Brown was incredulous that he could be President – so much he had them rewind the scene and play it back multiple times.

Above Video: This 30 minute documentary covers the rediscovery and restoration of the real, screen-used Toyota SR5 from “Back To The Future.” Editor’s Note: This is not the same truck listed here for sale.

The film must have made an impact on Reagan, because a year later in his 1986 State of the Union address he said “As they said in the film Back to the Future, ‘Where we’re going, we don’t need roads.'”

The Toyota SR-5 Pick Up appeared in the first film as a promotional truck for Statler Toyota in Hill Valley. Though it had far less onscreen time than the DeLorean it did appear in all three films at crucial plot points tied into the constantly changing future and past caused by Doc Brown and Marty McFly’s tinkering with the timeline.

The 1985 Toyota SR-5 is now considered one of the most collectible pick ups from the Japanese marque as it was the last year to have the live axle front and back, and the first year to have the desirable EFI engine option. Later trucks for the USA market would all have independent front suspension for better road handling, combined with a live axle rear.

This truck was built to fulfill the wish Marty has in the film, of taking it to the lake with a couple of sleeping bags in the back so that he can sleep under the stars with Jennifer.

“Check out that 4×4. That is hot. Someday, Jennifer. Someday. Wouldn’t it be great to take that truck up to the lake? Throw a couple of sleeping bags in the back. Lie out underneath the stars.” – Marty McFly

The “Back To The Future” Spec Toyota SR-5 Shown Here

This truck is the most faithful recreation of the original screen-used Toyota we’ve seen, whoever built it clearly paid attention to even the smallest details. In fact it’s indistinguishable from the original truck in the above documentary.

During the build this truck was fitted with a suspension lift, the correct wheels and tires, and the correct front and rear bumpers. It has a tubular roll bar fitted with those distinctive KC Daylighter spotlights, and the seller is offering it with a Hoverboard, a pair of “self-lacing” shoes, a Gray’s Sports Almanac, a framed poster, and a 1/10th scale remote controlled model.

If you’d like to read more about this truck or register to bid you can click here to visit the listing. It’s due to roll across the auction block with Mecum in Kansas in early December, and at the time of writing there is no price guide.