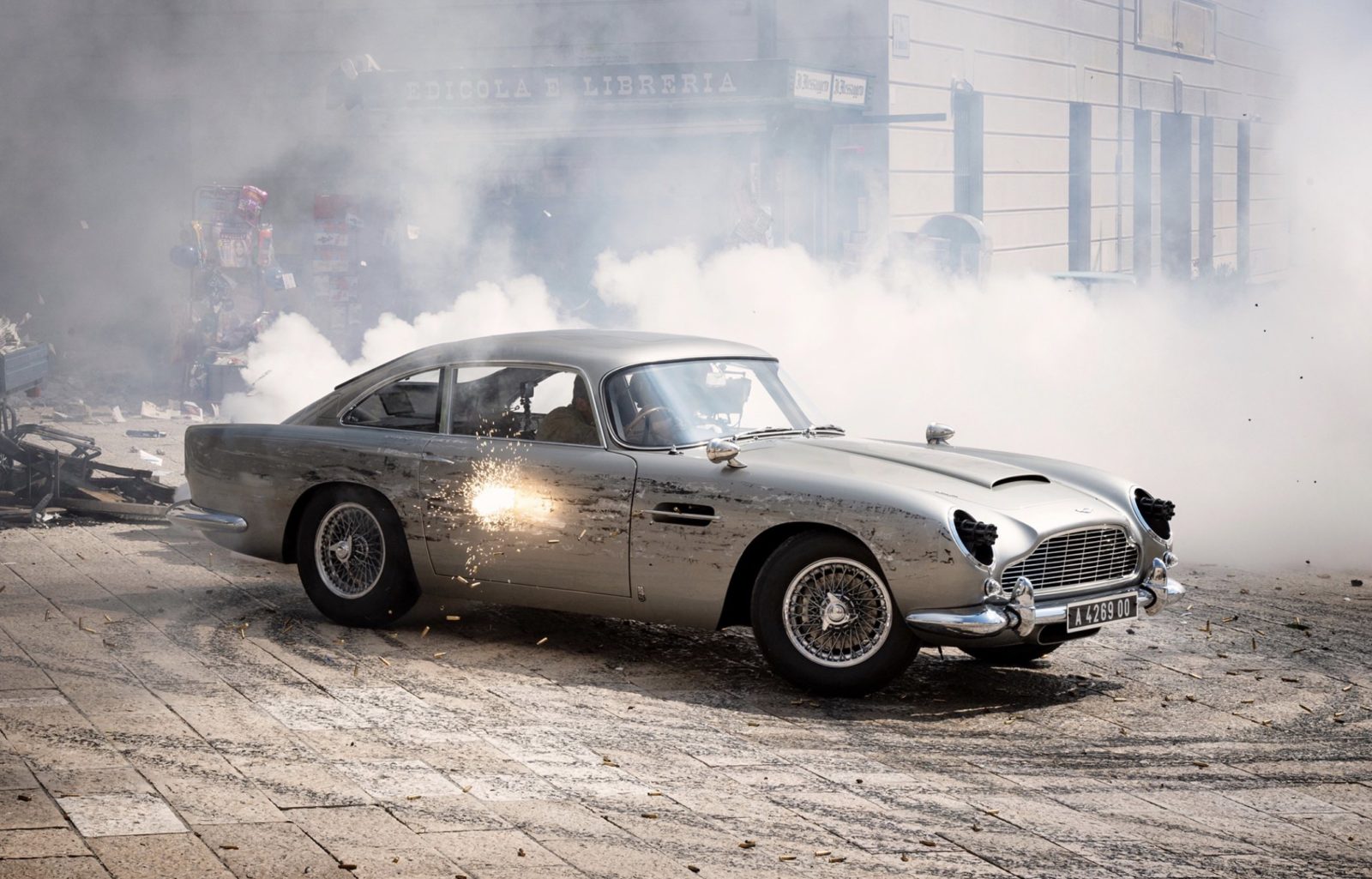 This Aston Martin DB5 isn’t actually an Aston Martin DB5, despite the fact that it was built by Aston Martin. It was developed as a stunt car for the James Bond film No Time To Die and used extensively in the film.

The car has a unique chassis with a carbon fiber body designed to look like the original DB5. The team at Aston Martin Special Projects developed all-new suspension and braking systems which allowed the car to be driven much quicker than an actual DB5.

Truth be told, the Aston Martin DB5 would only be as famous as its siblings the DB4 and DB6 if it wasn’t for the fact that it was used as the Bond car in the 1964 film Goldfinger starring Sean Connery.

Above Video: This is the extended cut of the Aston Martin chase scene filmed in Matera, Italy. You can clearly see why they needed to build bespoke stunt cars for the sequences.

The fatefulness of this decision to send a DB5 off for use in a new spy film, the first in the James Bond series, wouldn’t be fully understood for decades. The Aston Martin name is now forever linked with the James Bond franchise, the DB5 in particular.

As a result of this, Aston Martin DB5s now command vastly more than DB4s or DB6s on the classic car market, and all of them sell for more than the Aston Martin DB Mark III even though it was originally the Goldfinger car, well in the novel at least.

As mentioned in the introduction above, the car you see here was built by Aston Martin Special Projects specifically for use in No Time To Die. 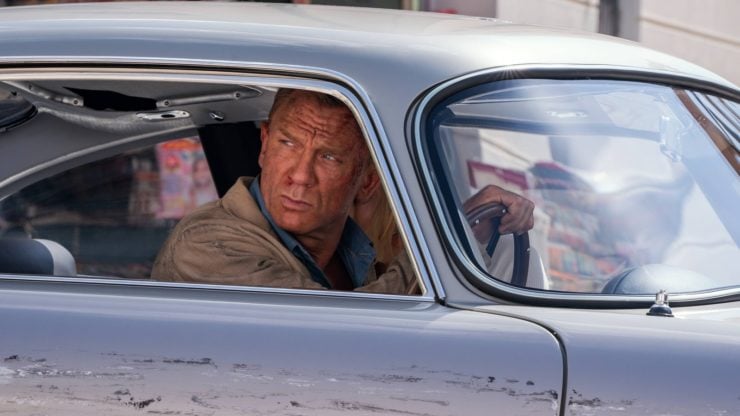 The chase scene through the streets of Matera, Italy is one of the most memorable parts of the film – helped along by the fact that the DB5 stunt cars performed so well.

Despite the fact that it was built by Aston it is of course not a “real” DB5, though they did make a continuation series of those recently with all the 007 gadgets on board.

As a stunt car this vehicle was built to withstand the extreme driving that would be required for the chase scene through the streets of Matera in Italy. Externally this car looks like an authentic DB5 however under the skin it’s a completely different car altogether.

“In Matera we built a whole rig that enabled us to make the car do a doughnut remotely, without Daniel doing a thing. Unfortunately, Daniel stole our thunder because he did the doughnut himself!” – Chris Corbould OBE – No Time To Die Special Effects Supervisor

A bespoke chassis was developed and fitted with a strong, lightweight carbon fiber body. Modern suspension and brakes were added, and a modern 3.2 liter straight six would be fitted under the hood, mated to a 6-speed manual transmission.

Frustratingly there is no further information on exactly what engine it is, we do know it’s not an Aston engine, and there are no photographs under the hood to help solve the mystery. 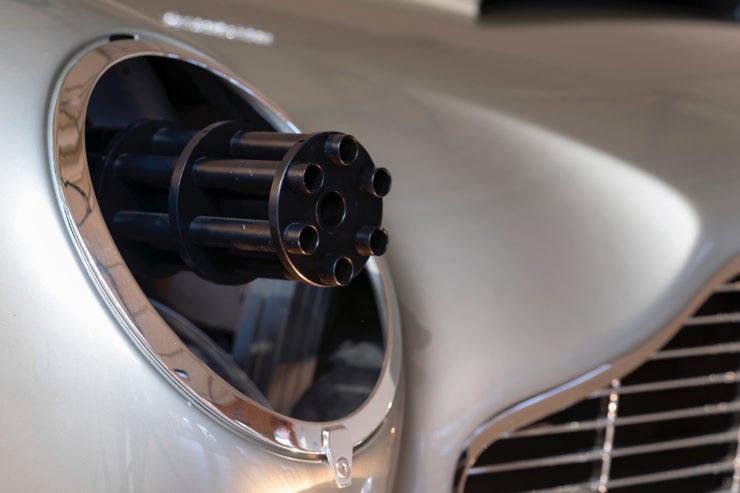 This stunt car is one of very few with all the functioning Bond gadgets – including the machine guns behind the headlights.

This car is one of very few that were fitted with all the Bond gadgets for filming, including the famous machine guns behind the headlights, and it has the faux continuity damage down either side for filming.

Christie’s do point out that this car is not registered with the Driver Vehicle License Agency (DVLA) nor is it approved for use on any public roads or homologated, so it’ll likely be bought by a collector for display purposes.

If you’d like to read more about this unusual piece of modern James Bond memorabilia you can visit the listing here. 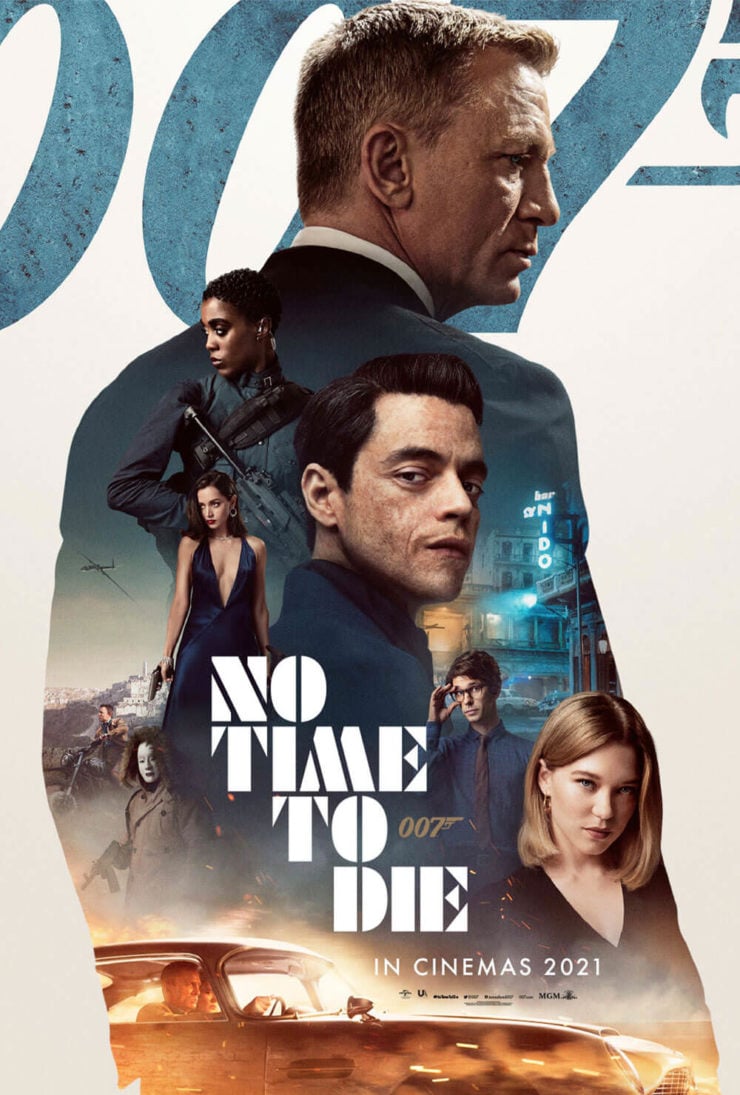 The car is a major part of the film, even appearing right on the primary movie poster under all the main characters. 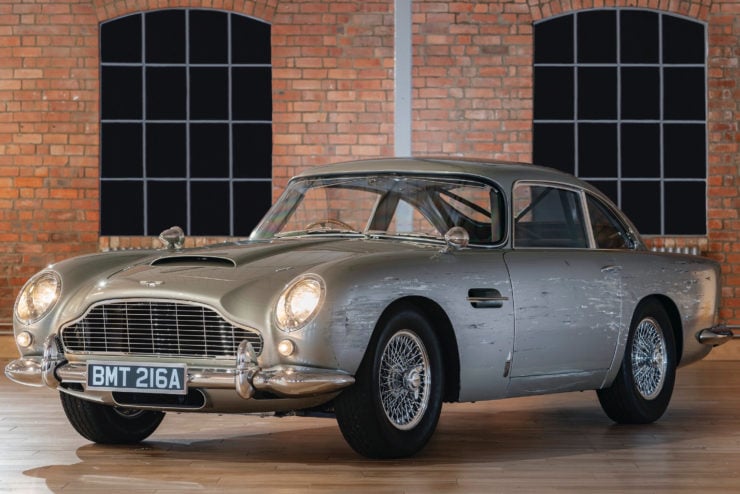 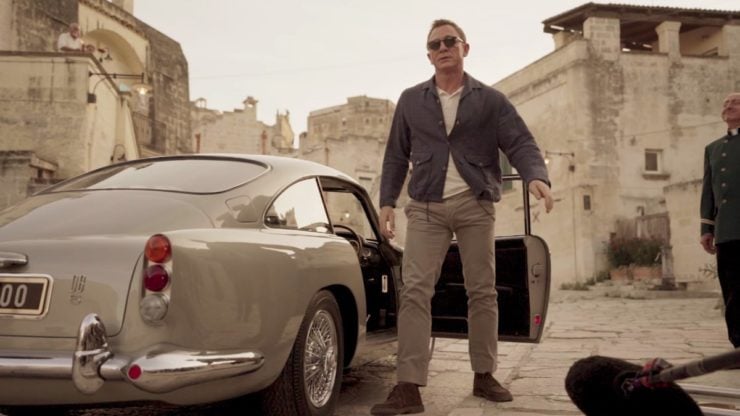 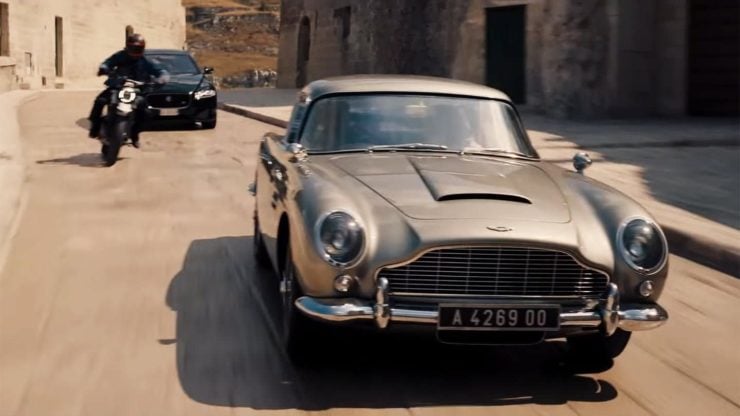 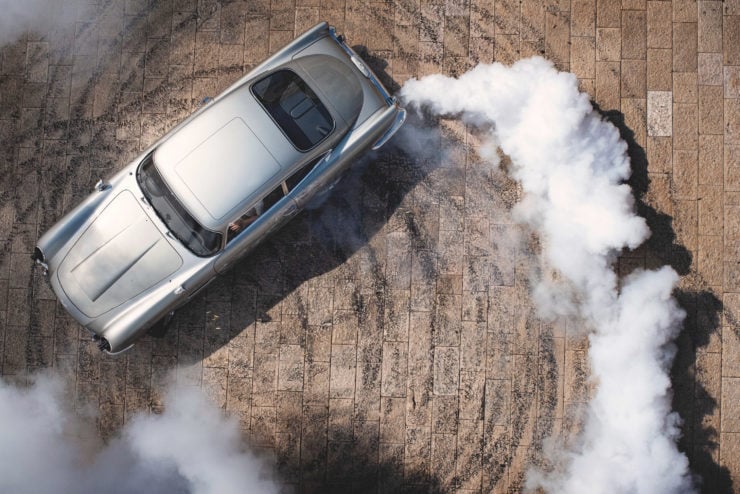 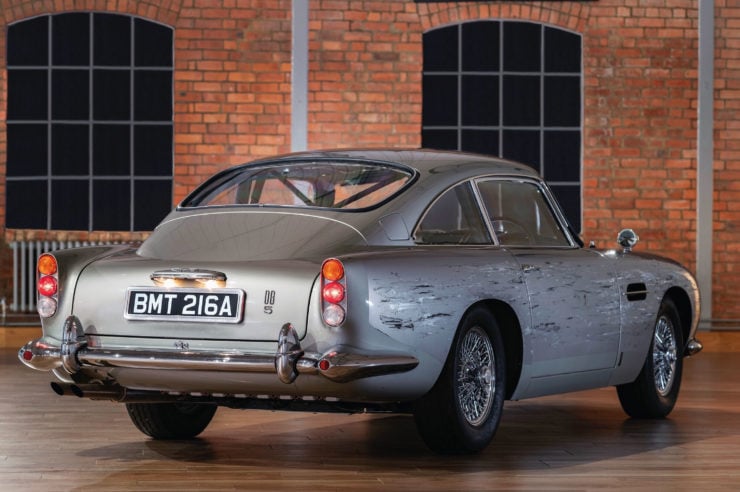 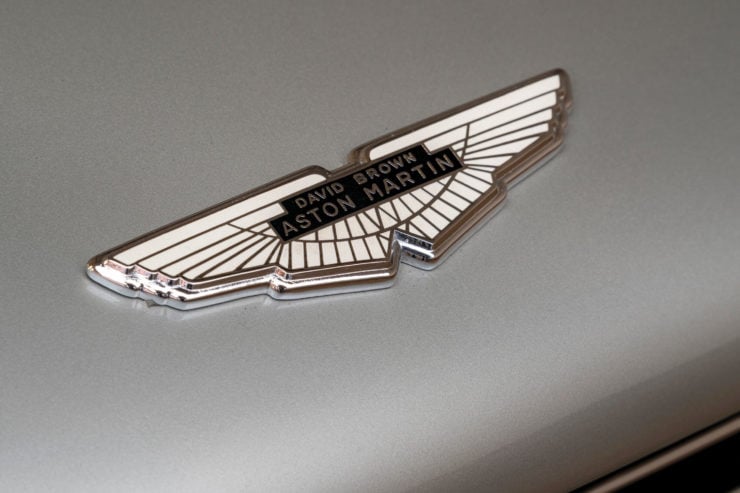 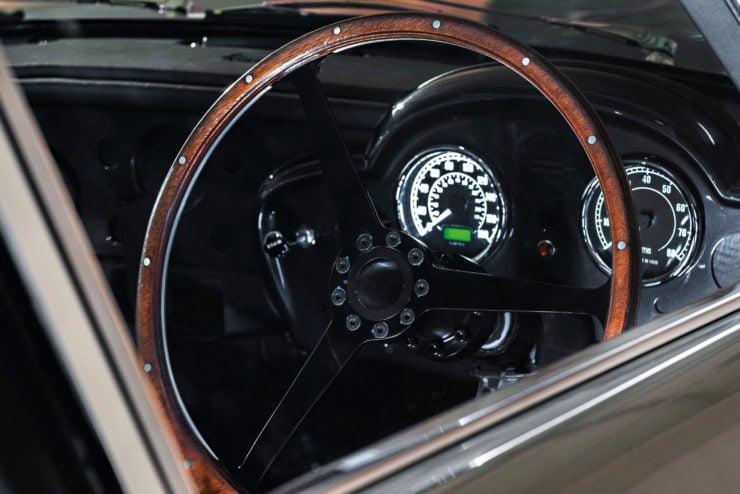 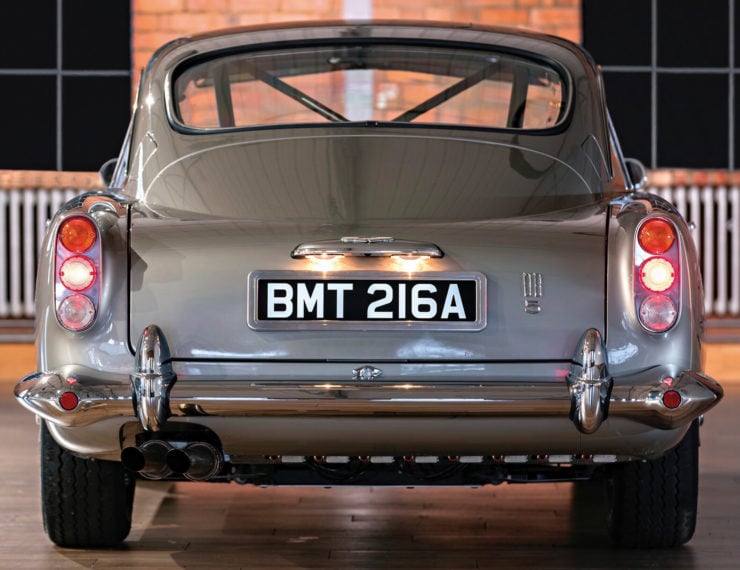 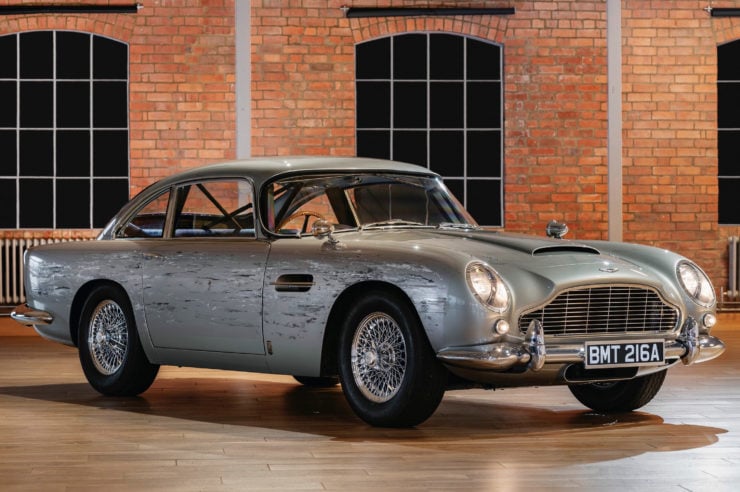