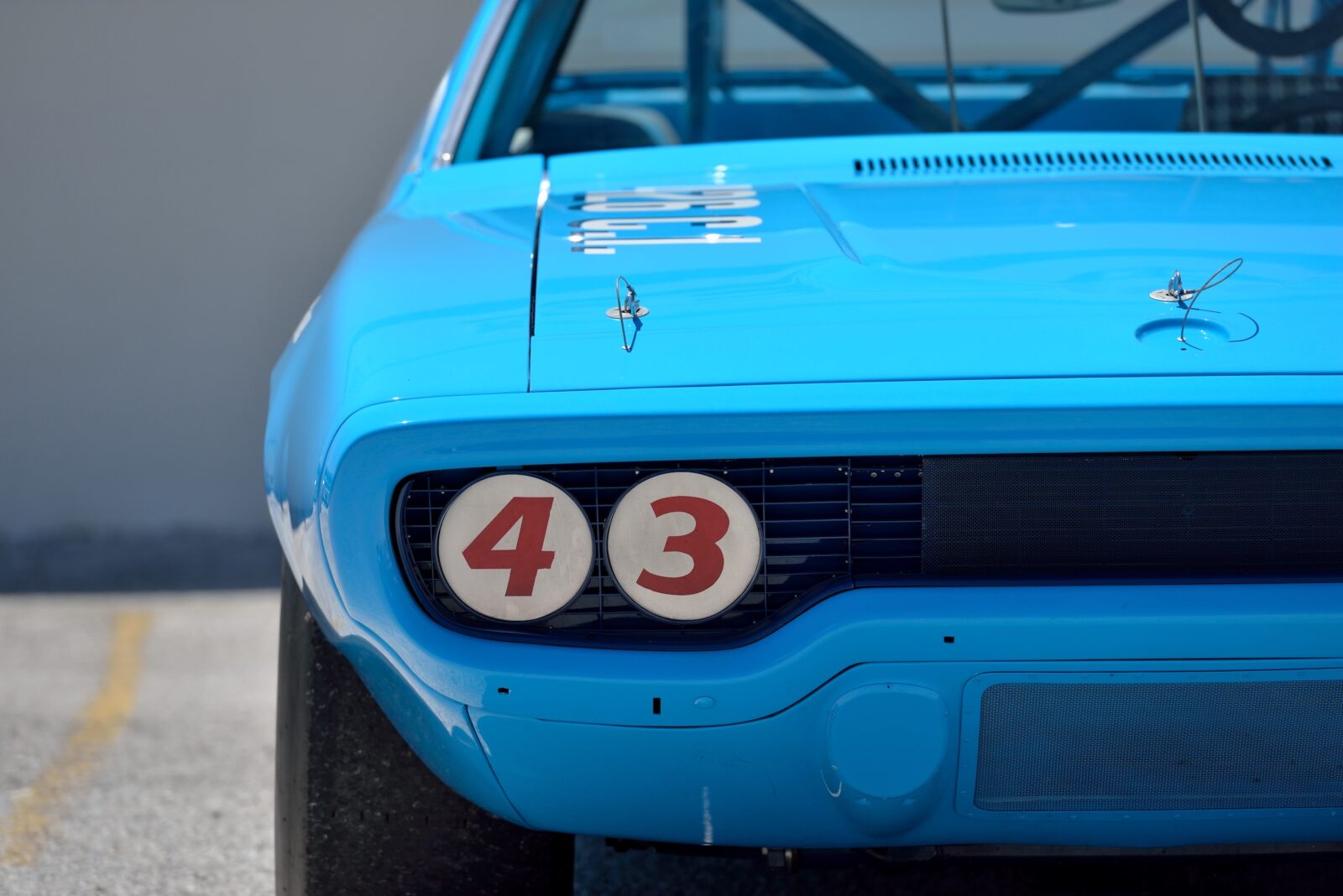 Historically this car is one of the most important American racing cars of its era, not only did it win the NASCAR championship with Petty at the wheel but it also visited the Nixon White House with Petty (pictured below), it was the car that helped Petty become the first driver to win over $1,000,000 USD, it was one of only two factory-sponsored cars for the 1971 season and the only one to complete the season.

As far as NASCAR vehicles go, this one is a king in its own right. 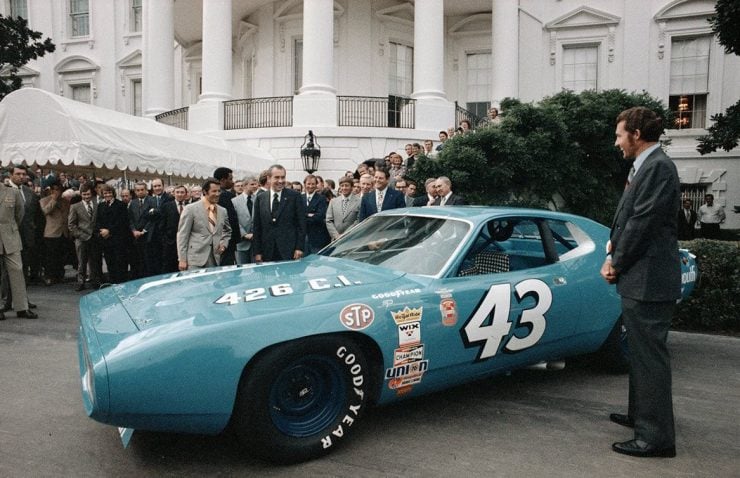 1971 was the last NASCAR series to feature genuine stock cars, or cars that used a production body and engine. 1972 is now considered to be the first season of modern NASCAR, with vehicles built using welded space frame chassis and look-a-like body panel kits.

The upside of this is that the cars are far safer, but the downside is that they’re not really “stock cars” anymore.

NASCAR, an acronym for National Association for Stock Car Auto Racing, has its early roots in American bootlegging during Prohibition.

Bootleggers needed cars that were faster than the local police in order to move their moonshine around the country, these modified cars would compete against one another in illegal races, and this would form the foundations of NASCAR.

As far as origin stories go, it’s hard to argue that the NASCAR series doesn’t have the best tale.

Impressively the 1971 season consisted of 48 races running between January 10th and December 12th, an astonishingly long season by modern standards with almost nothing in the way of an off season.

The car you see here carried Petty to many of his wins in 1971, it was delivered by Plymouth in white but was soon painted in his signature blue. 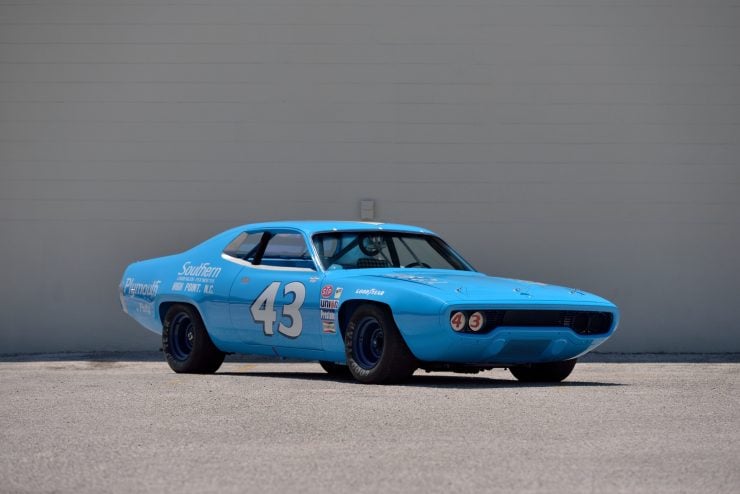 Power is sent back to a A833 4-speed manual transmission with a Hurst shifter and the engine is topped with a single 4-barrel carburettor on a unique Petty-fabricated NASCAR intake.

The Road Runner’s exterior is finished in Petty Blue with a Petty custom black and white houndstooth interior. The car has an 8 ¾ inch Mopar rear end, torsion bar front suspension with reinforced A-arms and dual shocks, and rear leaf spring suspension with tubular shocks in the rear.

The right side headlights are capped with Petty’s racing numbers of “43”, and there’s a full roll cage inside to keep the driver safe.

It’s unusual that NASCAR cars with this much provenance come up for sale, Mecum will be offering this one at the Harrisburg auction in late July. There’s currently no estimate attached to it, but if you’d like to read more or register to bid you can click here to visit the listing. 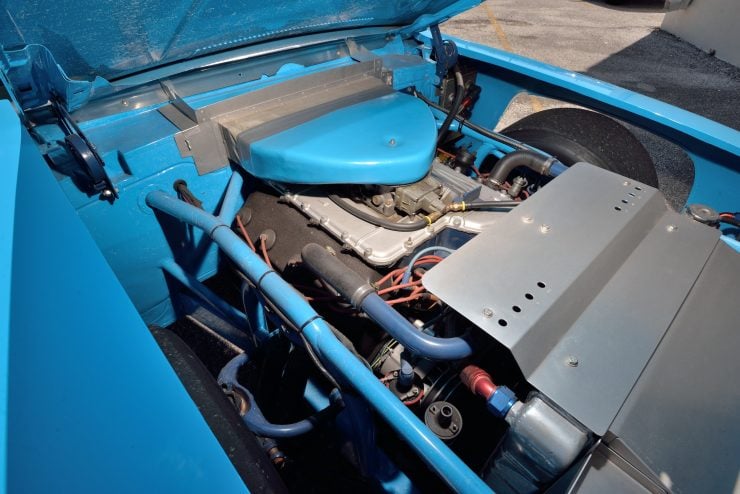 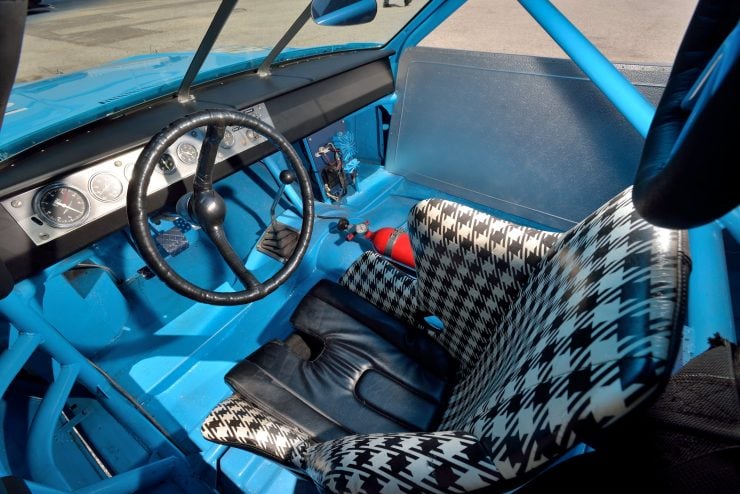 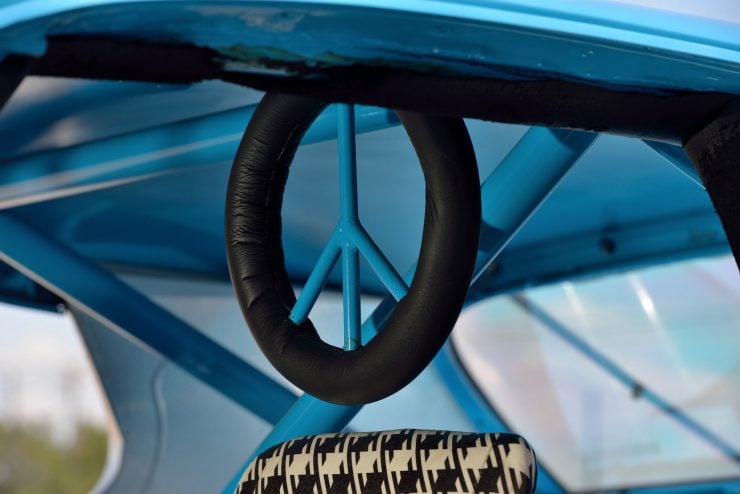 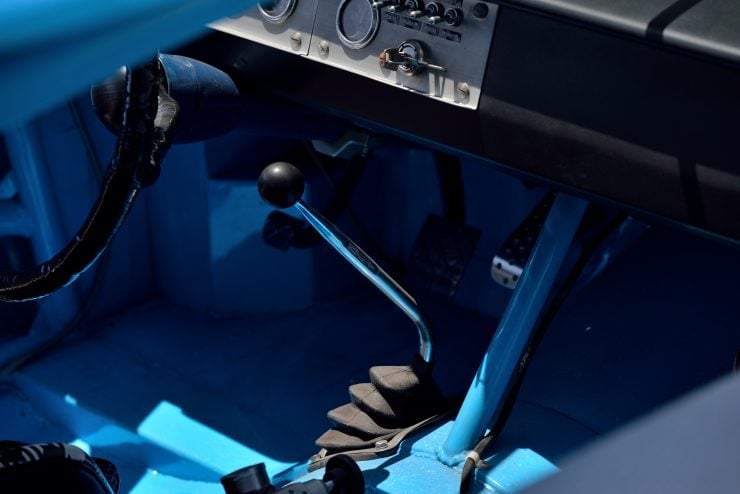 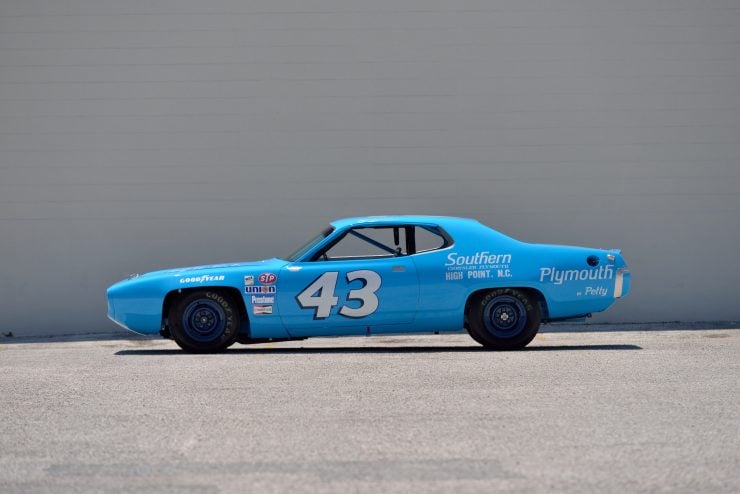 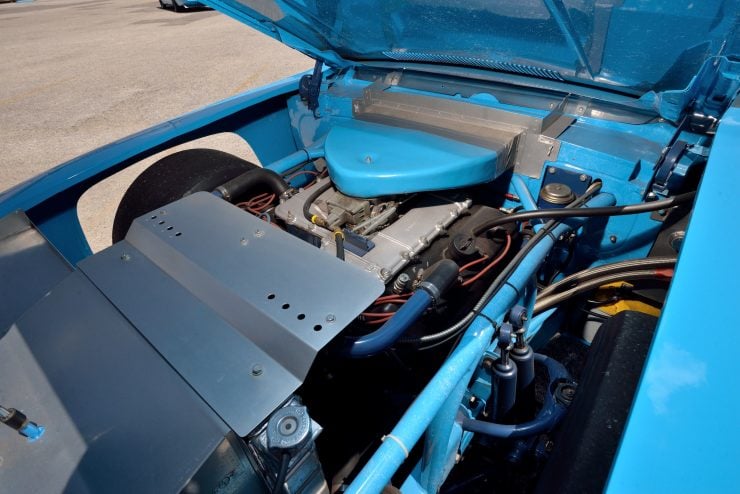 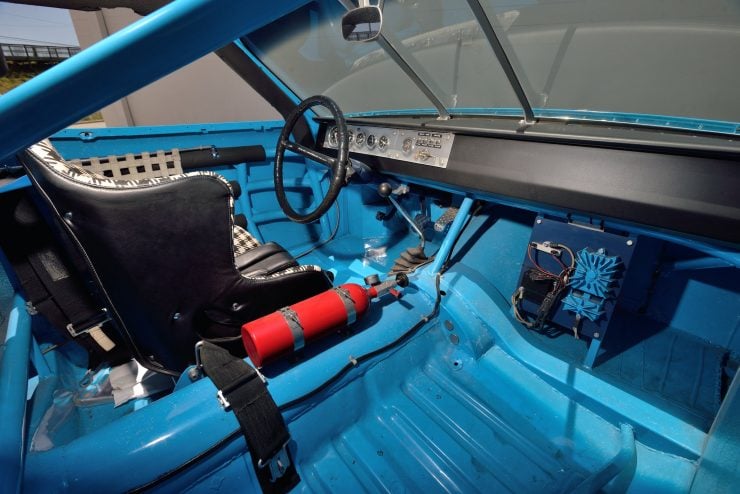 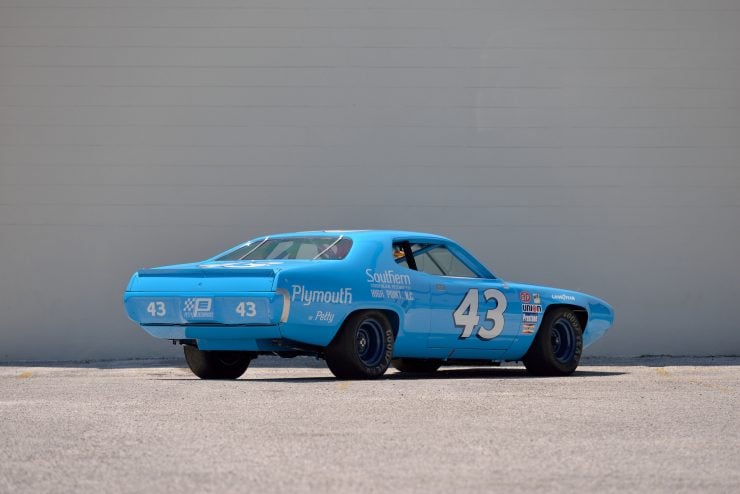 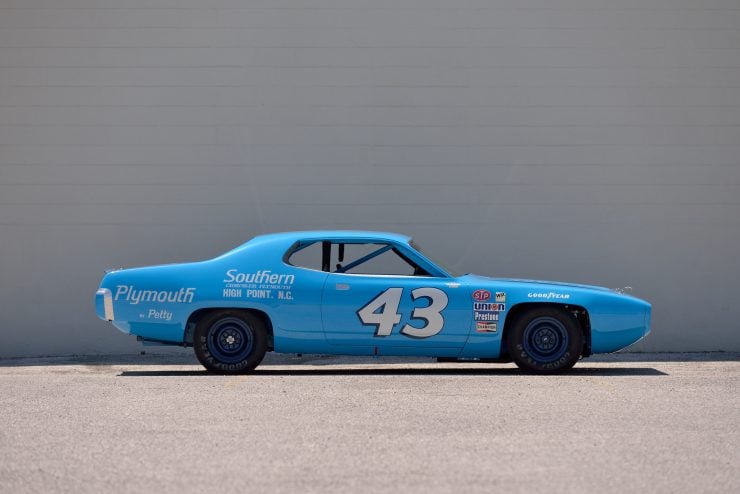 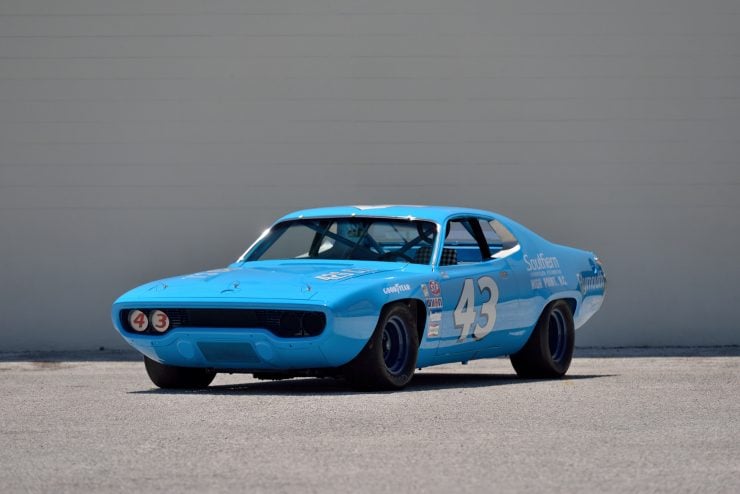 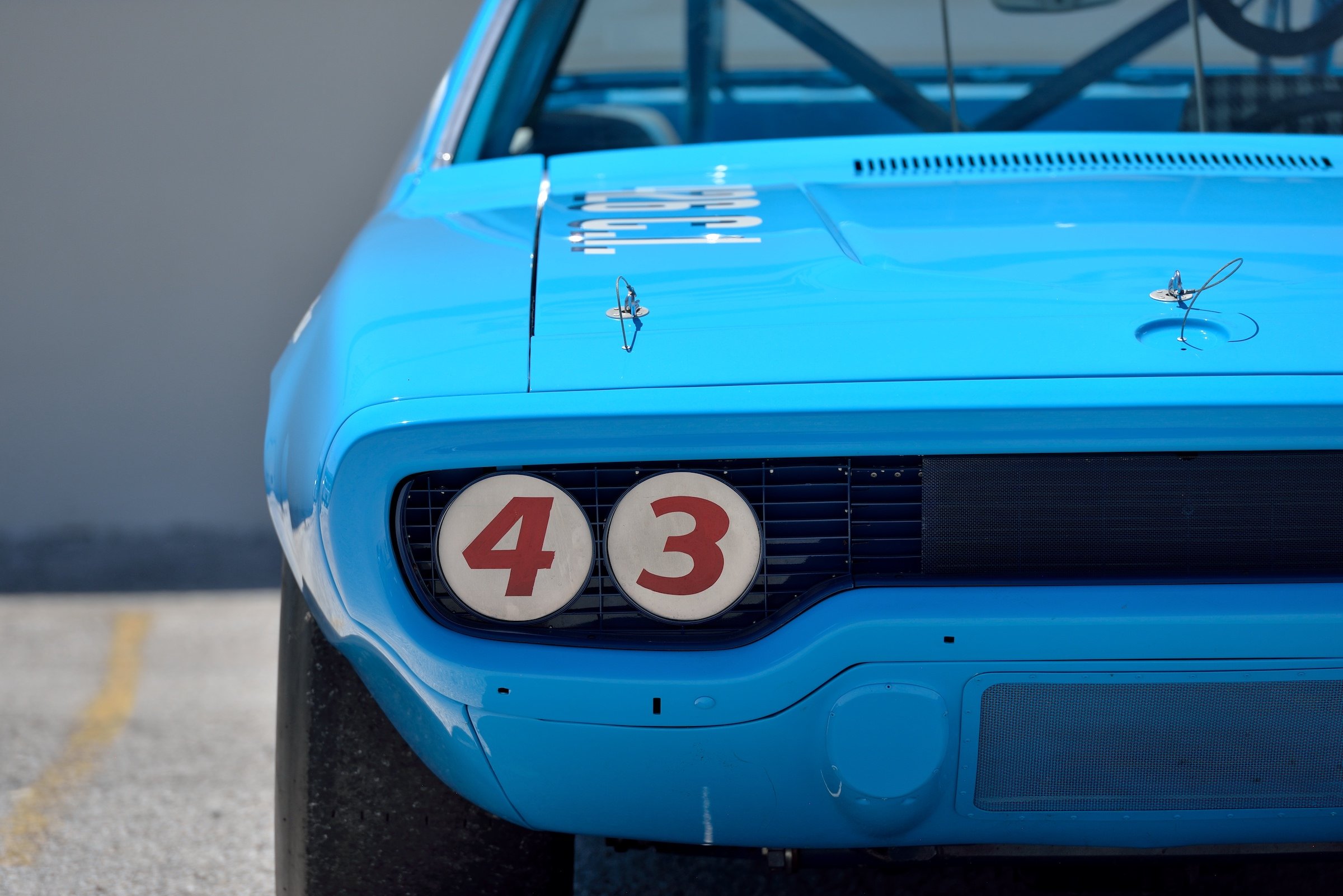