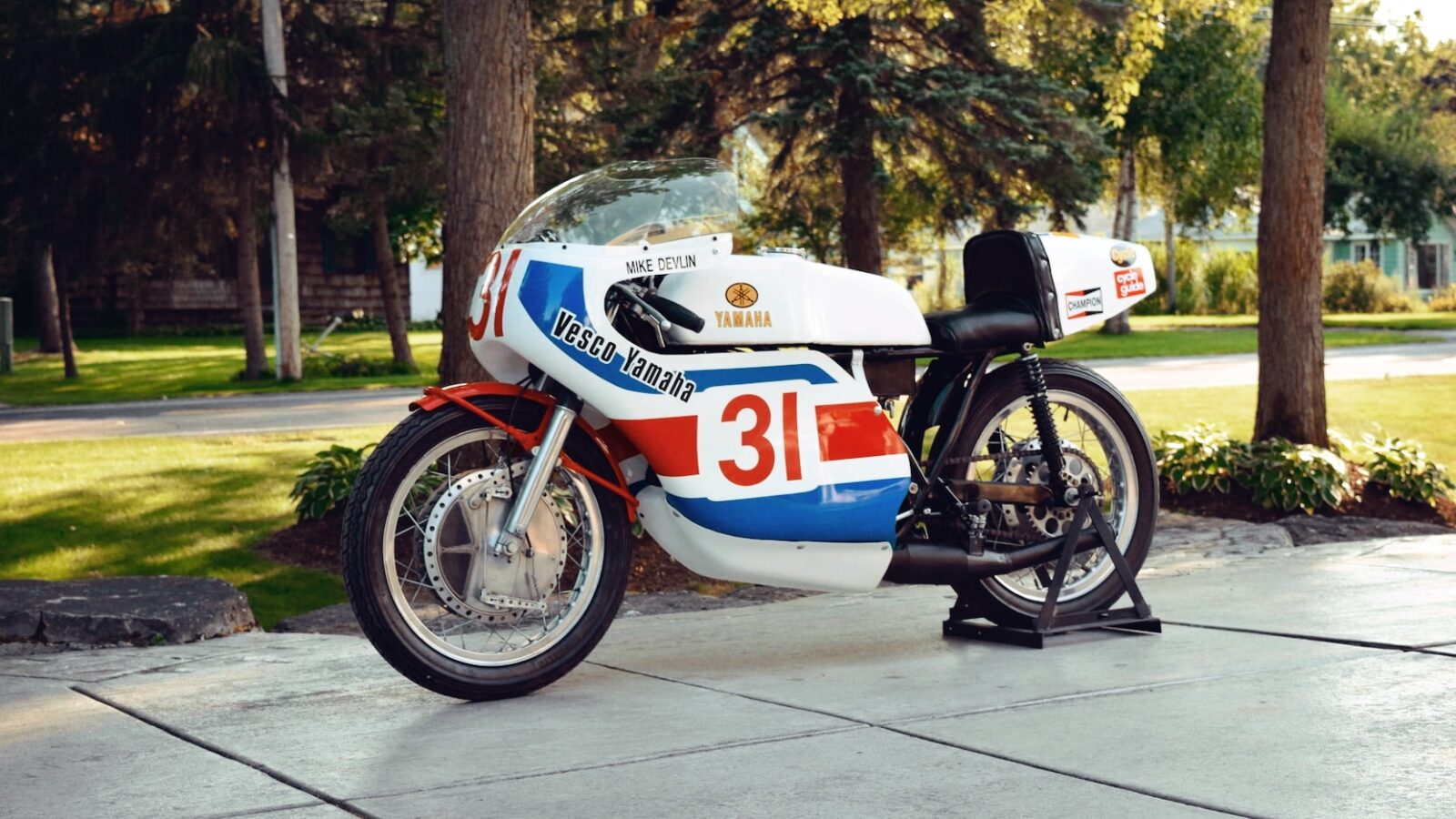 The Yamaha TD3 is a two-stroke road racing motorcycle released by the Japanese marque in 1972. It’s powered by an air-cooled 250cc parallel twin, with a 6-speed gearbox (reducible to 5 if rules demanded it), it has a horizontally split crankcase, a slippery fairing, it produces 49 hp, and the whole thing weighs in at just 105 kilograms (231 lbs).

The TD3 was an evolutionary step forward in a long line of successful Yamaha air-cooled two-strokes, and as it happens it would also be the last in its line. The first bike in this lineage was the Yamaha YDS1R from 1959, which was followed by the Yamaha TD1 of 1962, the TD1B would appear in 1963, then the TD1C would roll out in 1967. Yamaha released the TD2B in 1971, which was followed a year later by the bike you see here – the TD3.

The most immediately notable features of the Yamaha TD3 are the characteristic fairing, and the large front brake – a double sided twin leading shoe drum. This brake and other Yamaha drum brakes like it are in significant demand with vintage racing enthusiasts, who fit them to everything from Nortons to Ducatis and everything in between, as they offer a marked improvement in front brake function over the original units. 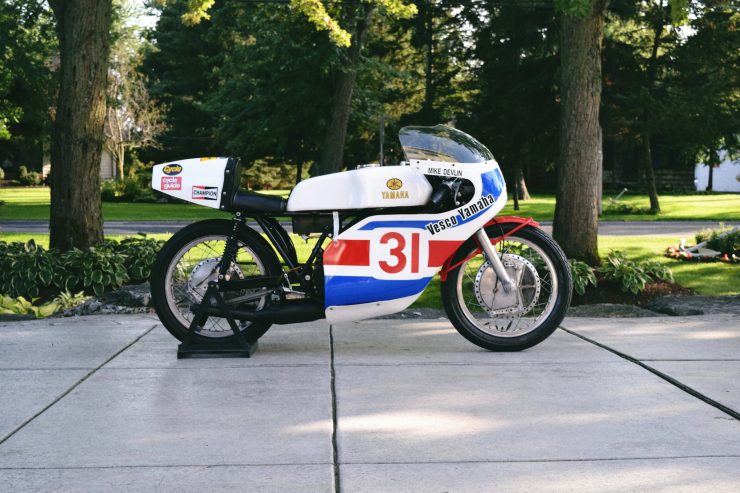 The lightweight frame is a steel twin loop design, with a standard swing arm at the rear with double shock absorbers and telescopic forks up front. There’s a single, somewhat compact seat with a large rear bump stop, twin fuel tank indents for the rider’s knees, clip-on handlebars, and a Perspex shield that allowed the rider to scrunch down over the tank and reduce aerodynamic drag.

Mounted between the clip-ons is a simple tachometer, with 7 numbers on the dial and a red line of 10,500 RPM, which riders often pushed over. The drum brakes and rims are aluminium alloy, fitted with stainless steel spokes, and they measure in at 2.75″ x 18″ up front and 3.0″ x 18″ in the back.

The 1972 Yamaha TD3 you see here is an original, it was ridden by racer Mike Devlin, who piloted the bike in 1972 AMA National events – starting with Daytona. It still has its matching numbers frame and engine (TD3 990164) and has been stored in a secure temperature controlled environment to preserve the bike in excellent condition despite its being over 45 years old.

It’s due to be sold by Mecum Auctions between the 23rd and 27th of January, and it comes with pictures from the era of Mike Devlin on the motorcycle, with its documented history. There’s currently no estimated value on the bike, and there’s no reserve mentioned either. If you’d like to read more about it or register to bid you can click here to visit Mecum. 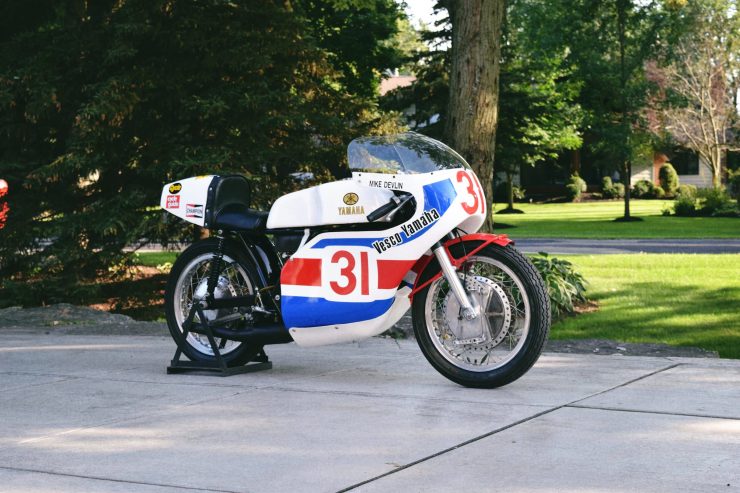 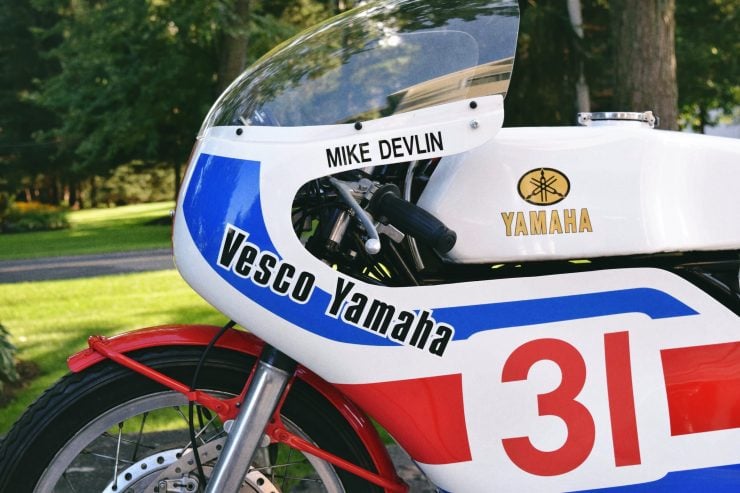 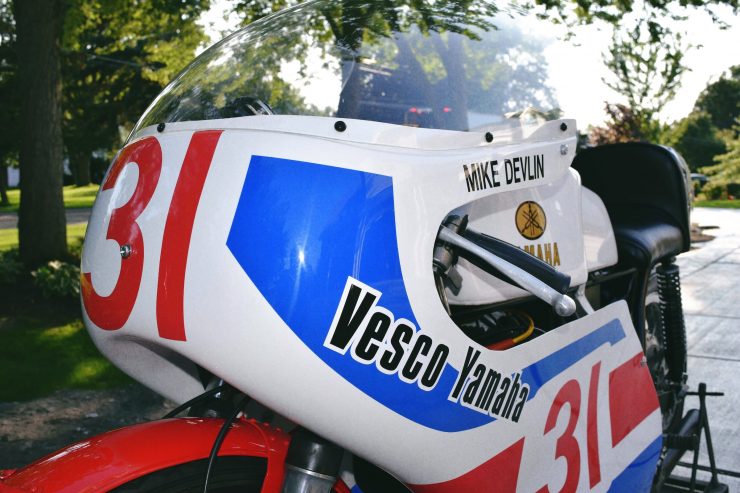 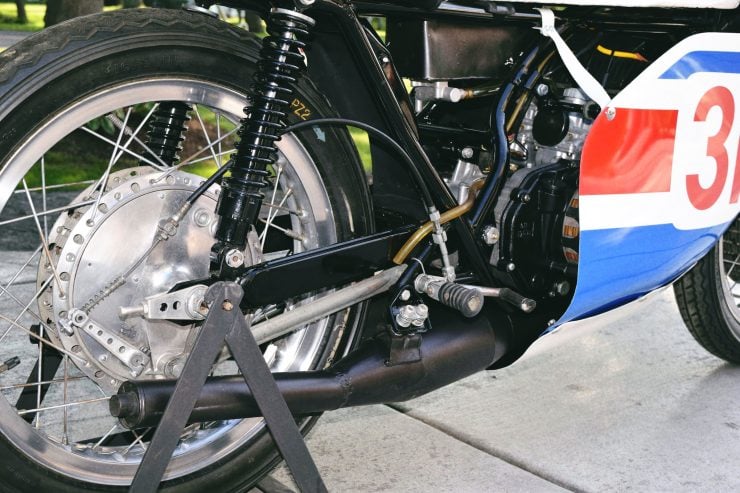 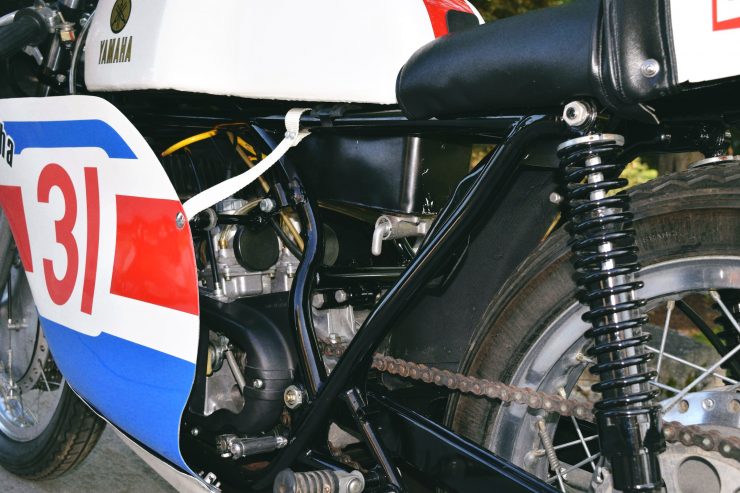 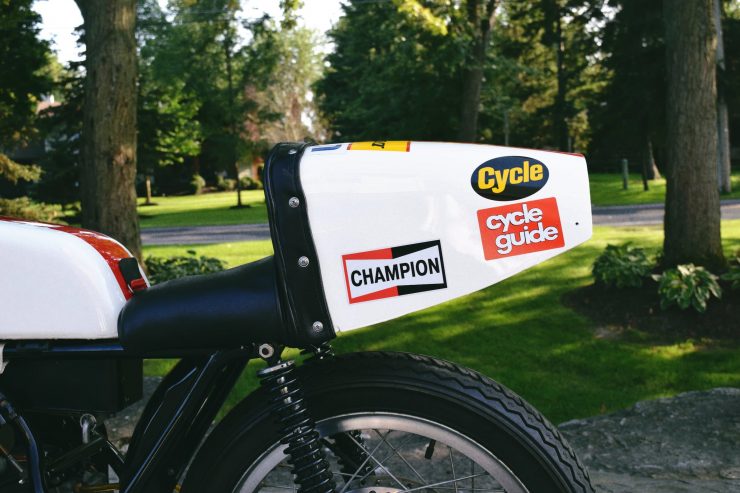 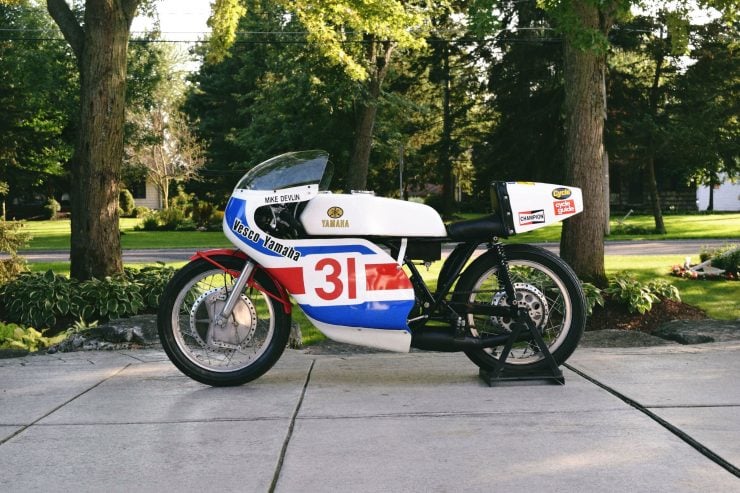 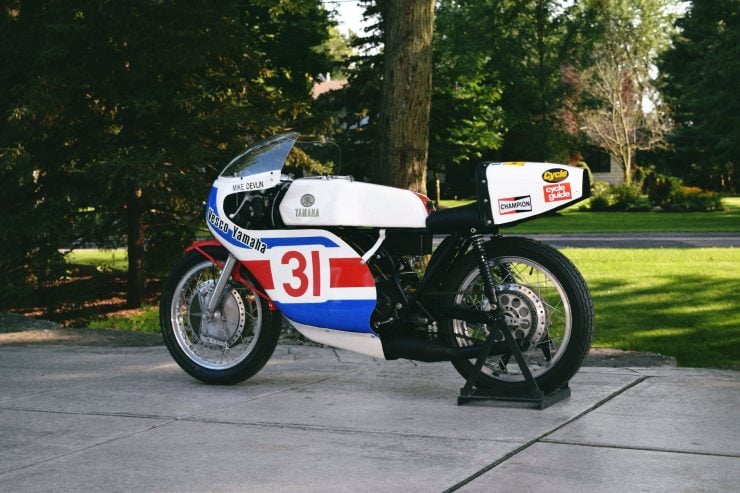 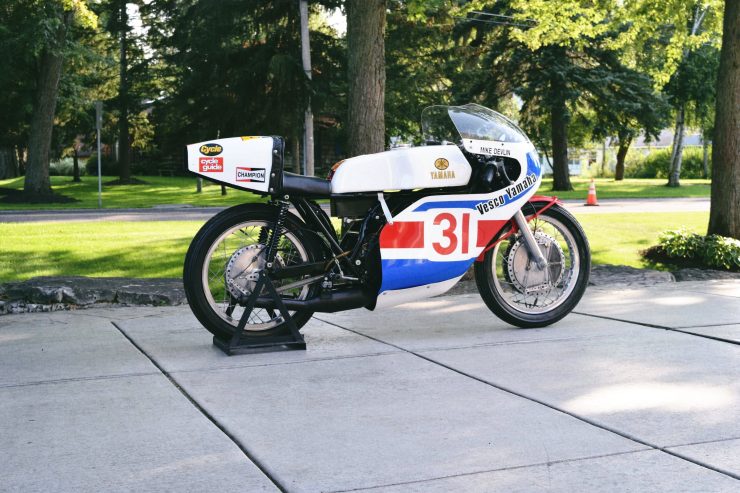 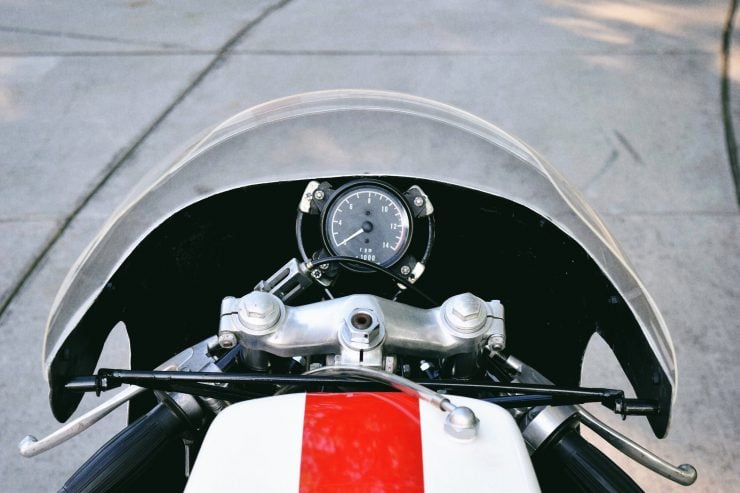 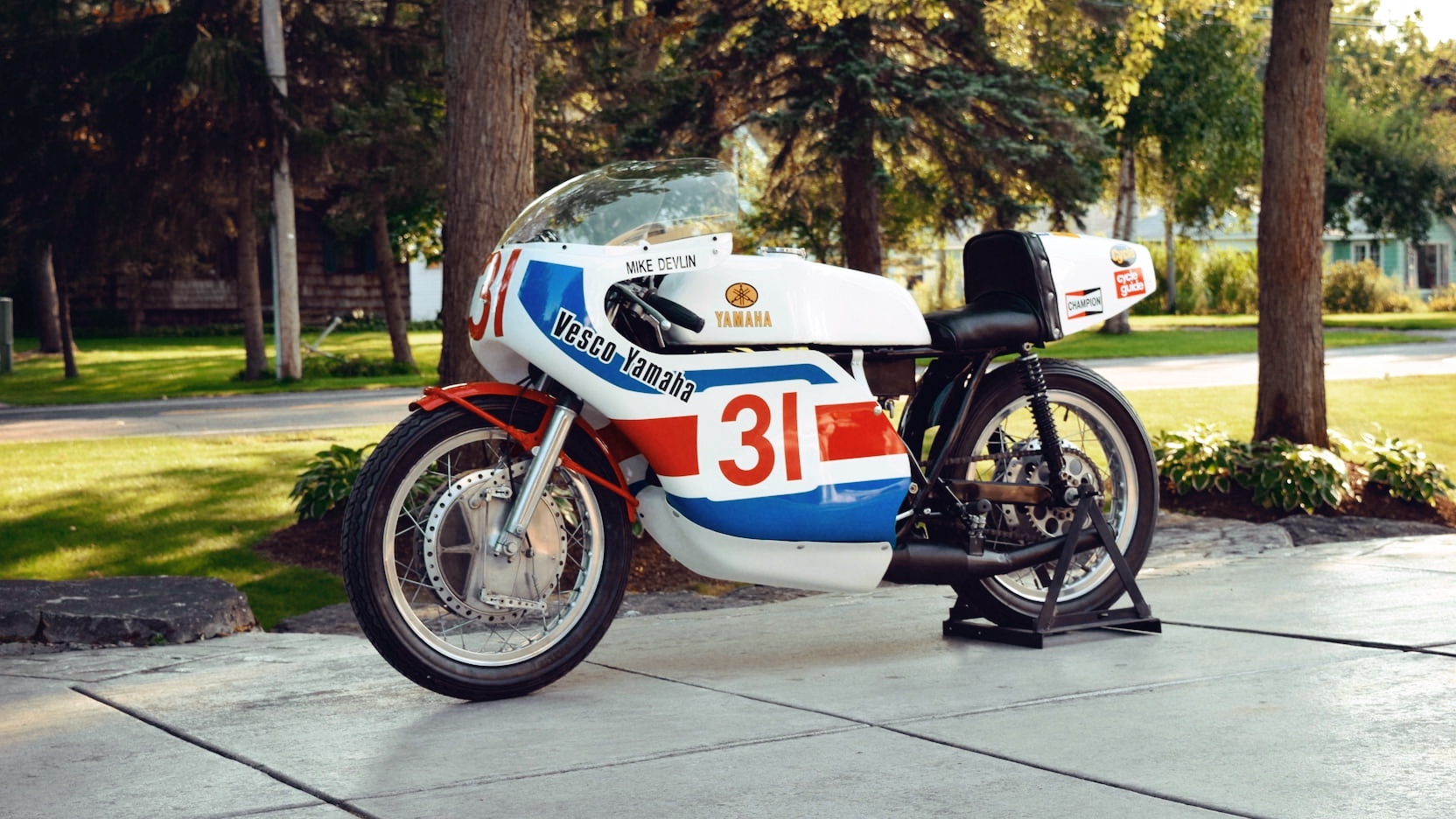