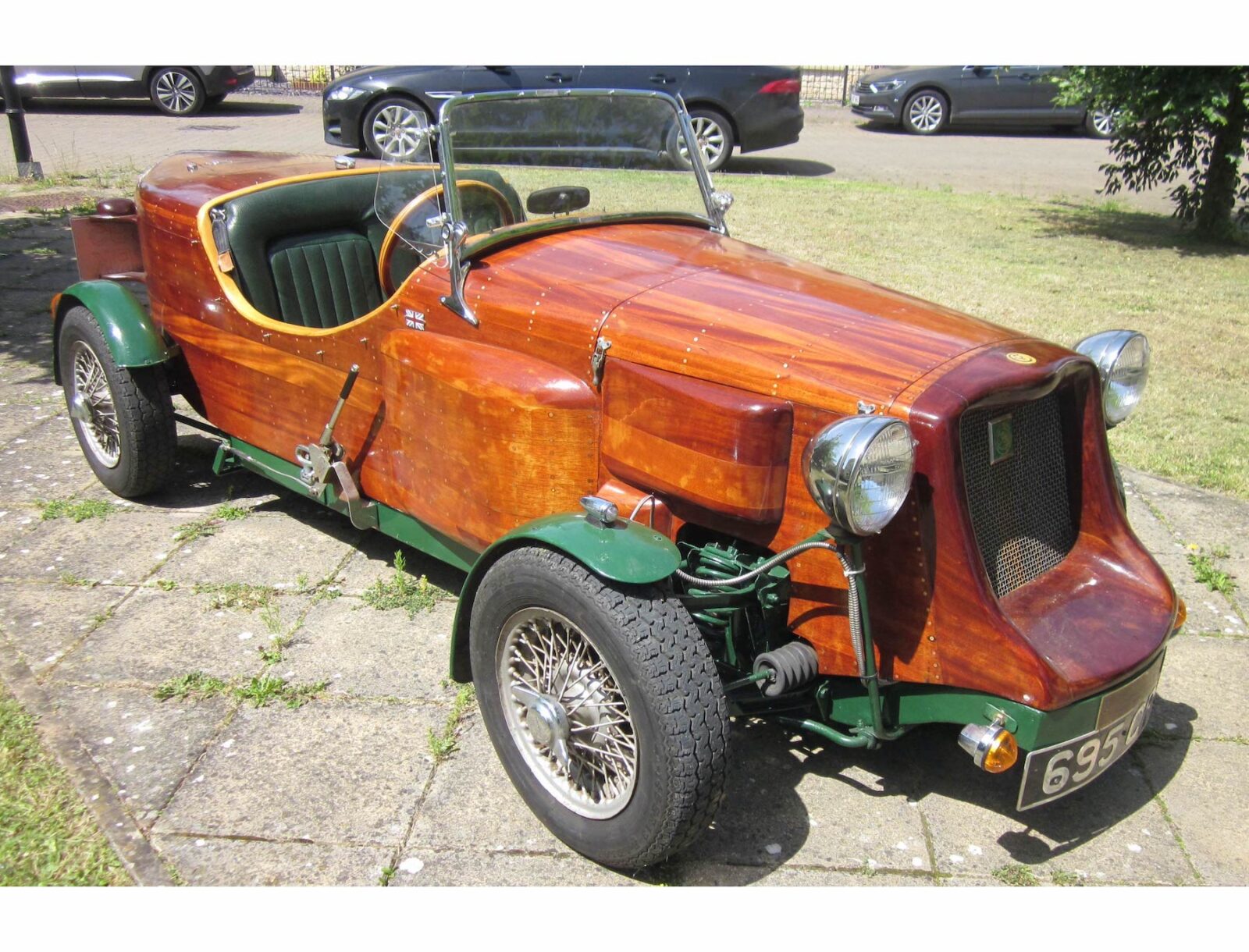 This is the first in a new series we’re doing here on Silodrome called Curious Contraptions, we’ll be regularly finding weird, wonderful, and woeful machines then showcasing them here to tell you their unusual stories.

When the Triumph Spitfire Mark I was first introduced in 1962 the designers had no way of knowing that a few years later, an owner would remove the beautiful Giovanni Michelotti designed body and replace it with something that looks like it would be more at home floating in the bay.

Of course wood isn’t a new material for building cars, some have even jokingly called it “nature’s carbon composite,” but we don’t typically see many wooden bodied cars on the road any more. This makes the unusual Triumph you see here all the more interesting, and I’m sure it has no problem gathering crowds whenever it stops for fuel.

✱ This is a 1964 Triumph Spitfire Mark I with an immediately noticeable difference – it has a body made entirely from wood.

✱ It was built by Roger Cawthorne as a showcase for his company Cawthorne Woodcrafts of Dartmouth, England, and it has a body made from teak, yew, and mahogany with brass rivet fixings throughout.

✱ The car retains the original Spitfire Mark I chassis, running gear, and drivetrain, and it won the Triumph Sports Six Club’s International Concours event in 1990.

A Triumph Spitfire Mark I With A Difference

Due to the fact that the Triumph Spitfire used body-on-frame construction it was an ideal candidate for a rebuild with an unusual wooden body like this – something that wouldn’t have been possible if it had unibody construction like its period sales rival, the MGB. 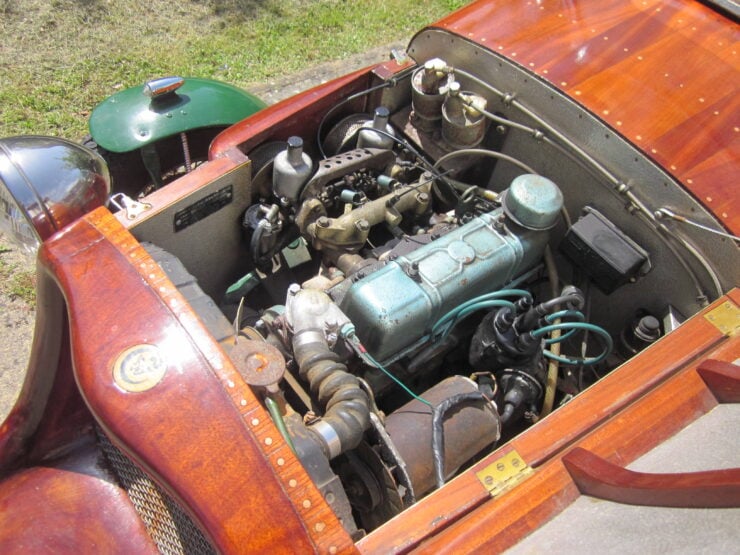 Above Image: The engine sits under a discreet wooden hatch, and there’s a slight bulge on the right hand side of the engine bay to accommodate the two SU carburetors and their air filters.

The Triumph Spitfire would become a popular model for the British automaker, though it was very nearly never made. Michelotti had designed the car in 1957 using the Triumph Herald as its platform, however Triumph was in financial trouble and the prototype ended up under a dust sheet in the corner of the factory.

It wasn’t until Leyland Motors took over Triumph in the early 1960s that the project came back to light, it was quickly approved for production and changed little from the original Michelotti design.

Over the course of the 1962 to 1980 production run Triumph sold over 315,000 of them, greatly helping to keep the company in the black and creating one of the most popular roadsters of the age.

The Triumph Spitfire enjoyed some significant successes on the racetracks of Europe and North America. The car won a number of SCCA National Sports Car Championships in F and G Production classes, a Spitfire also won its class in the 1964 Tour de France rally and the 1965 Alpine Rally, with an outright win in the 1964 Geneva Rally.

Of course, the 1964 Triumph Spitfire you see here isn’t famous for motorsport successes but for its highly unusual all-wood body. Many classic cabriolets of the coachbuilt era featured a boat tail rear end, often made from wood using techniques from the world of boat building. 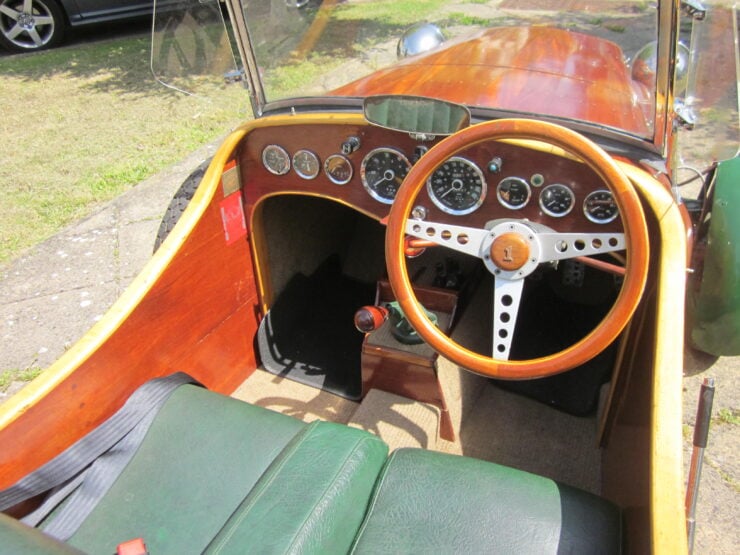 Above Image: The interior looks much like a pre-WWII roadster, with both seats close together and a hand brake outside the right side of the car.

The unusual wooden-bodied car you see here was built by Roger Cawthorne of Cawthorne Woodcrafts of Dartmouth, England to showcase his work. Although the styling of the body won’t be to everyone’s tastes it’s not hard to appreciate the skilled work that went in to creating it.

It appears that the body uses many established woodworking techniques used by boat builders, it has a boat tail rear end of course with an opening hatch allowing you to use the trunk space, and up front there’s an opening hood to access the engine. 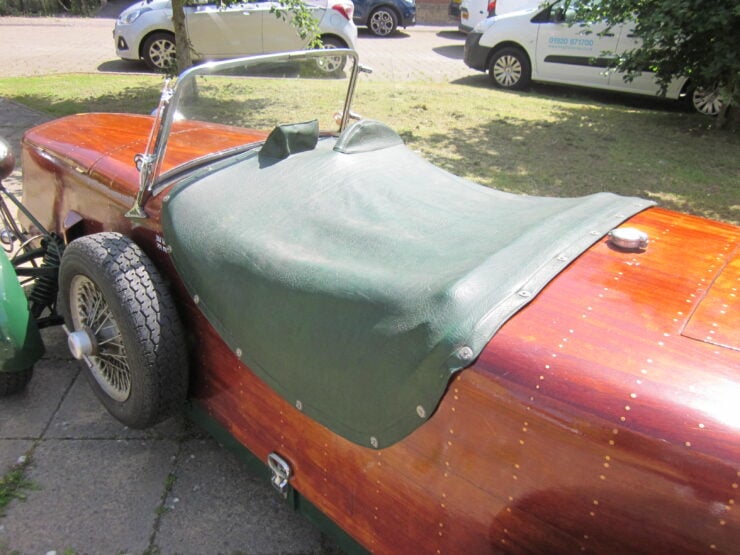 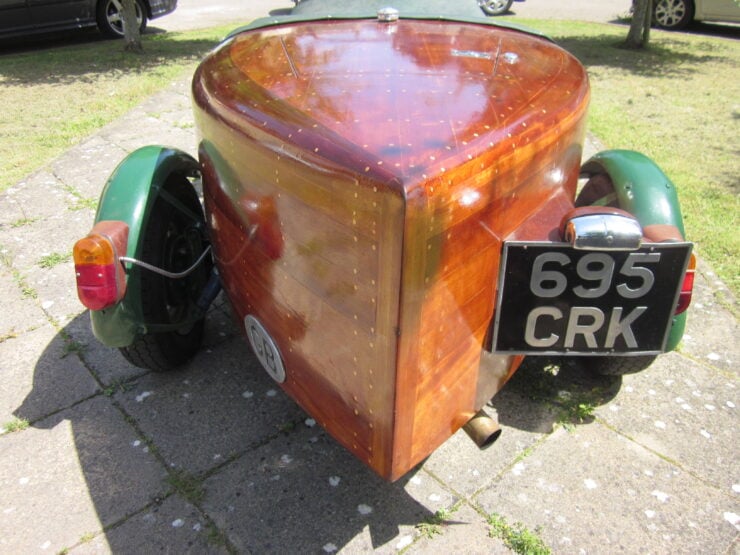 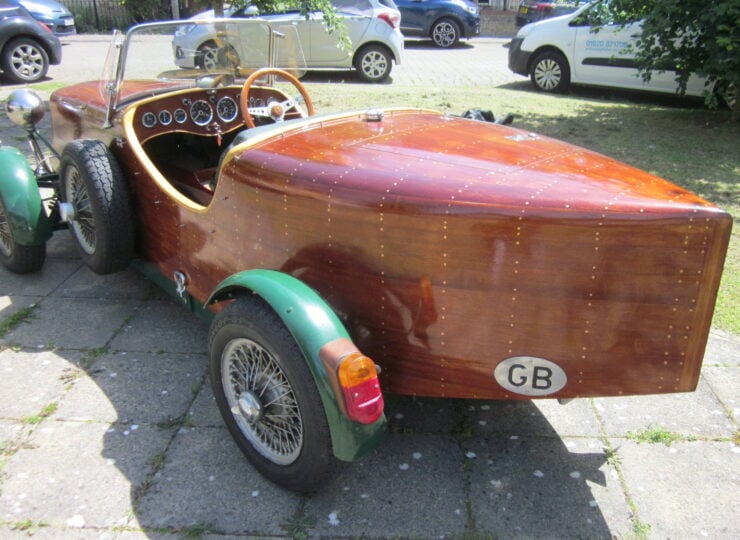 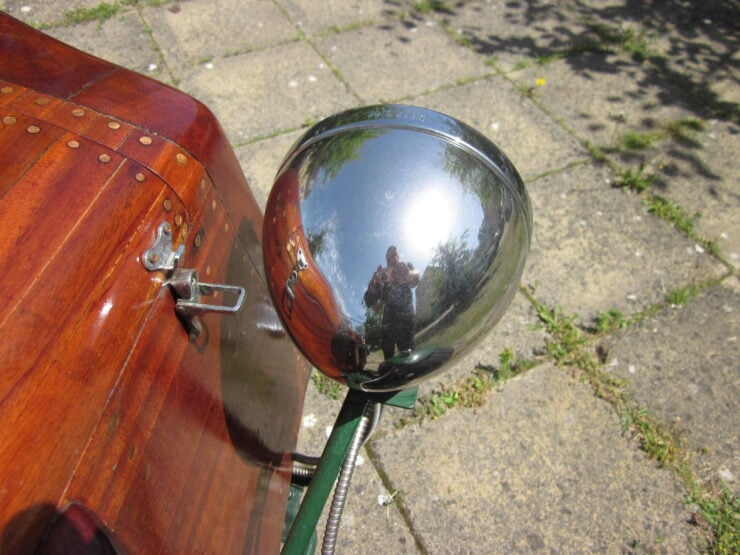 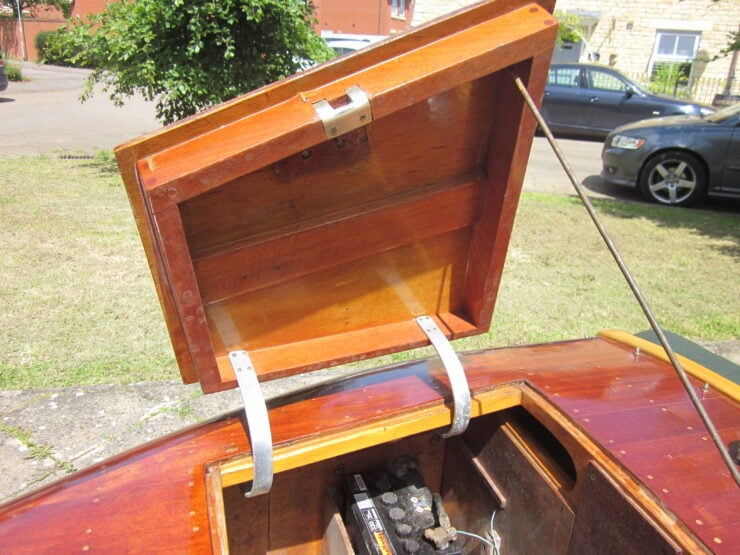 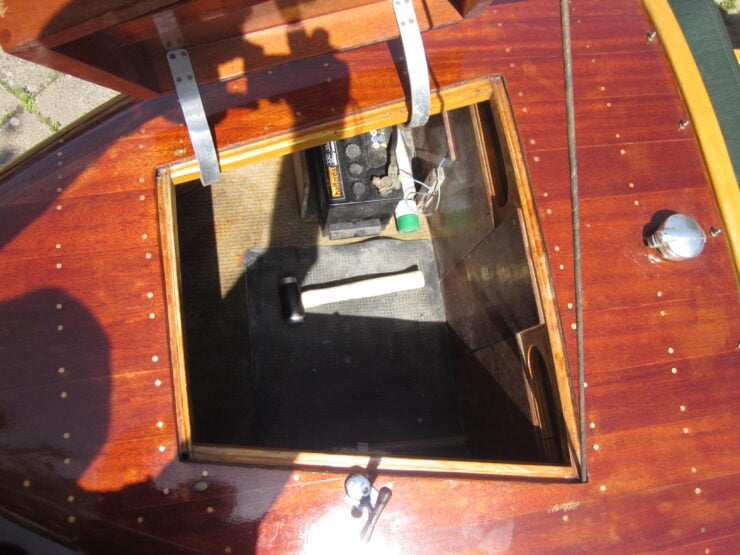 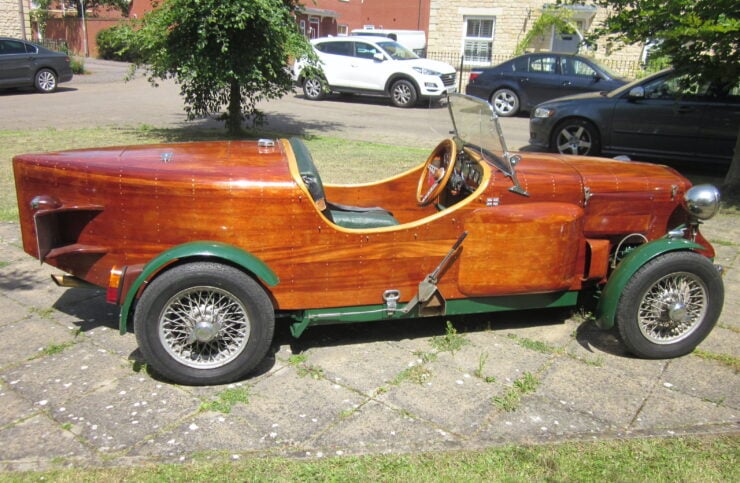 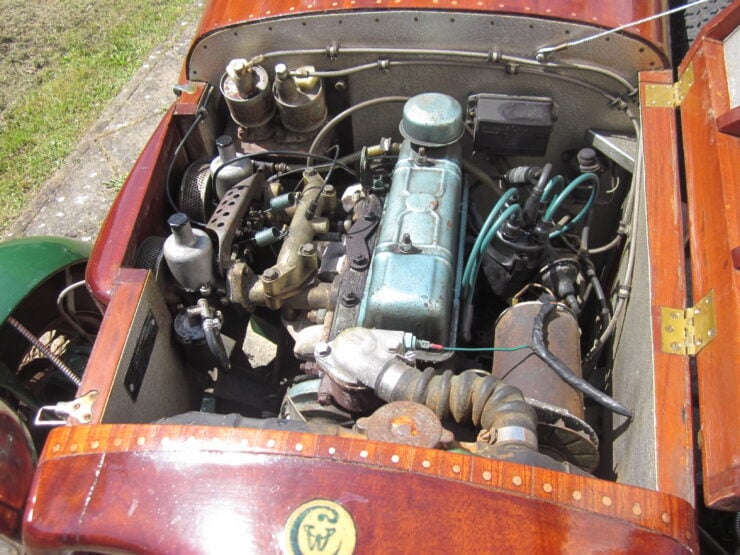 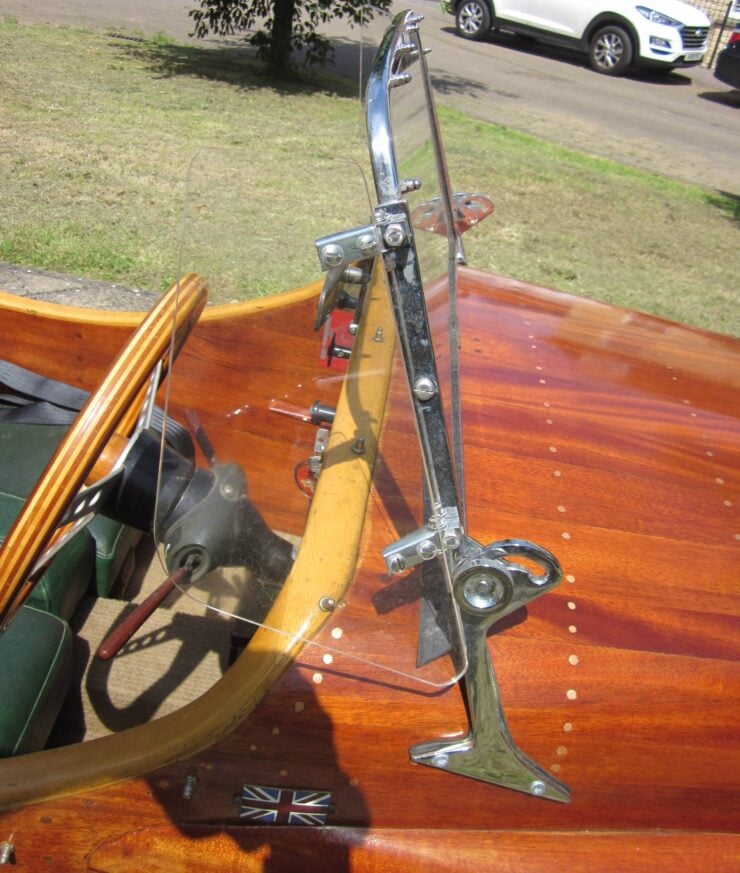 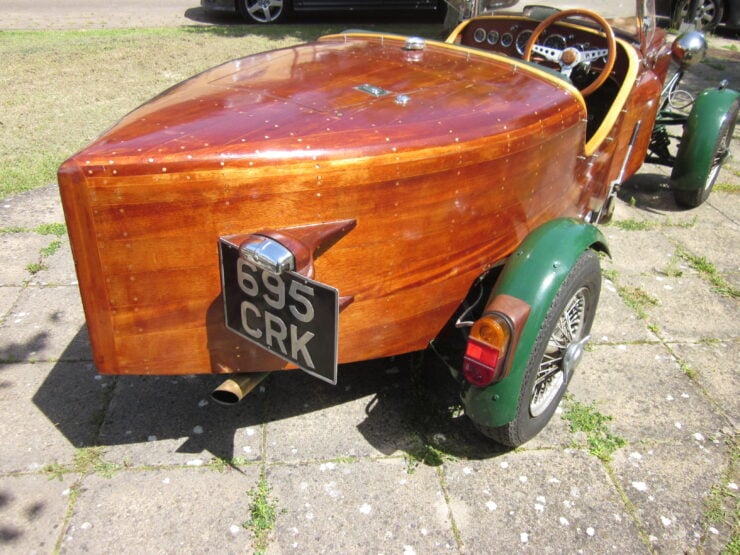 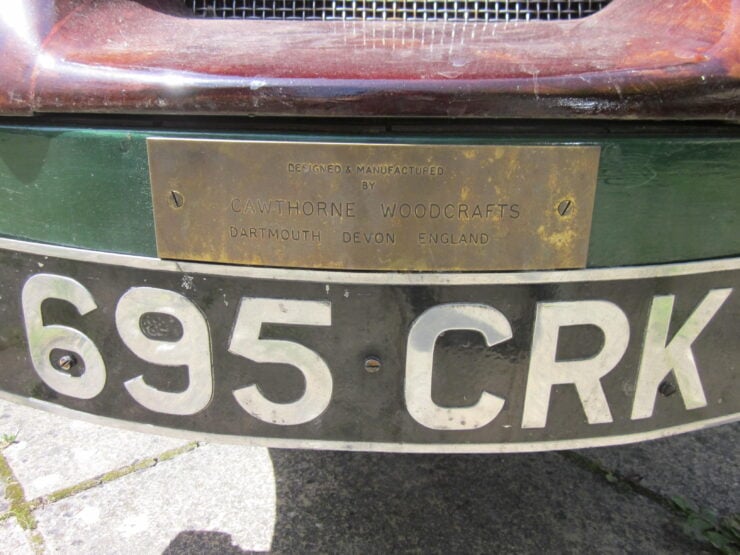 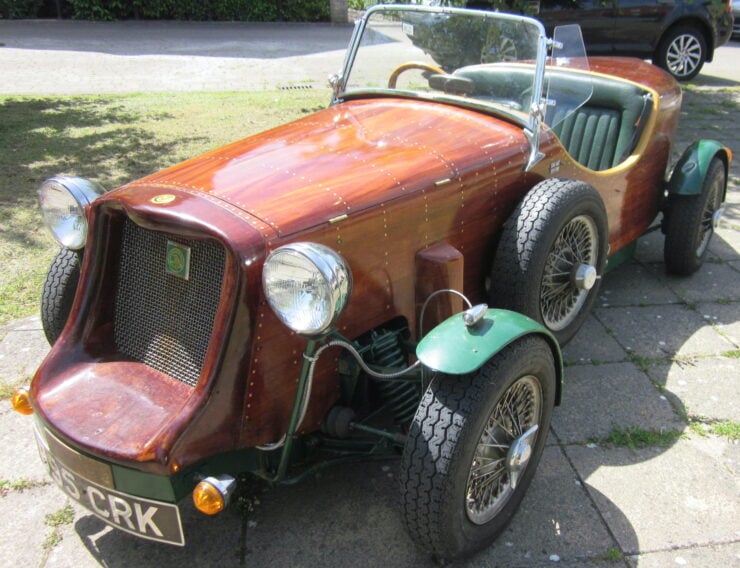