The 1972 Triumph Trackmaster you see here is the bike ridden by Ron Moore in the 1970s that set the record around the Ascot TT circuit in Gardena, California. A record that then stood for years.

The brandnames Triumph and Trackmaster go together like bacon and eggs, the two companies were collaborating to build the world’s fastest flat trackers in the late 1960s, creating a legend in the process.

Trackmaster originally started out as a company named Sonicweld, it was founded by Ray Hensley in the 1960s specifically to build strong, lightweight frames for flat track racing in the United States. 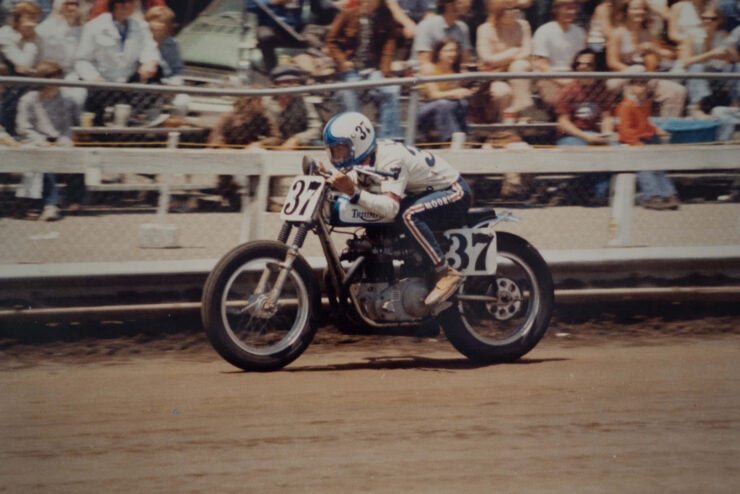 Ron Moore racing this bike in period with the number 37, the bike is now carrying the number 76, though any new owner who intends to race it would of course have their own number fitted.

Hensley had started out as a racer himself and a competitive one at that, but the lure of the engineering side of racing was too strong.

He started out modifying frames by repeatedly riding his BSA into a kerb, to bend the frame neck and shorten the wheelbase slightly while reducing the rake – this gave the bike quicker turn in and made it more responsive for flat track racing.

After the AMA made custom racing frames legal for competition use riders were no longer stuck with the original frame that their motorcycle had come with – typically they were too heavy and had too much rake.

This was when Hensley got into business as Sonicweld, teaching himself the basics of frame geometry and welding in the process. His frames were inspected by the AMA and approved – and not long after this Triumph came knocking. 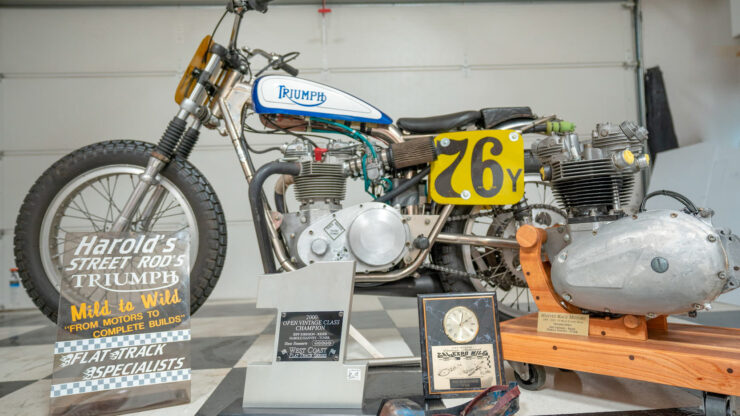 This bike is being sold as a single lot that includes the Hanvey 650 race engine you see pictured here, as well as historic documentation, and some other parts.

Legendary flat track champion Gary Nixon knew Hensley and to his credit, he loaned him $1,000 to set up shop and make his operation legitimate. This was a sizable chunk of money at the time, enough for Hensley to rent a building and hire some staff.

The very first Trackmaster frame went to flat track legend Gene Romero, Gary Nixon got his soon after and the rest is history. Companies like Redline and Champion soon appeared to challenge Trackmaster but Hensley’s company stayed number one.

The market for custom frames began to dry up as the 1970s progressed and manufacturers got better at making their own race frames, oftentimes by copying the work of people like Hensley, Bimota, the Rickman brothers.

More recently the company was brought back into full production to provide brand new frames welded up using the original jigs. It’s now possible to build yourself a brand new Triumph Trackmaster that looks just like those first originals from the late 1960s. 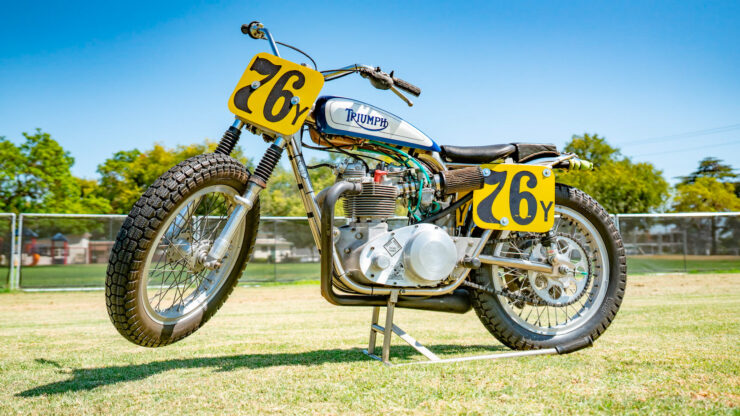 Trackmaster-based flat trackers have enjoyed a significant renaissance in recent history, so much so that the company was reformed a number of years ago to meet the demand.

Many Trackmaster-framed motorcycles did well for themselves in flat track competition in the 1960s and 1970s, but the bike you see here did better than most.

This was one of the bikes raced in period by Ron Moore with great success, winning at the Ascot TT circuit in Gardena, California and holding the lap record for many years. It’s now being offered for sale along with a spare Hanvey 650 race engine on a custom display stand, and a selection of corroborating documentation, associated parts, tools, and other artifacts.

This bike is due to roll across the auction block with Mecum in late January, if you’d like to read more about it or register to bid you can click here to visit the listing. 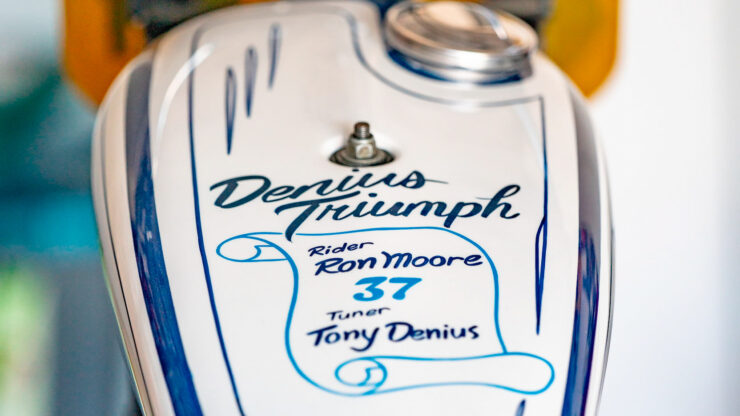 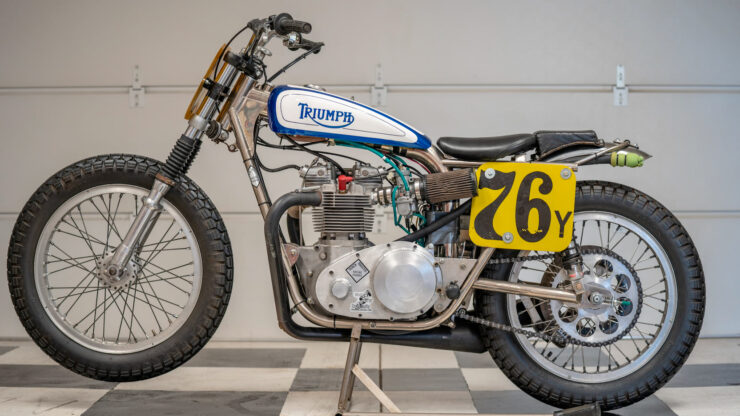 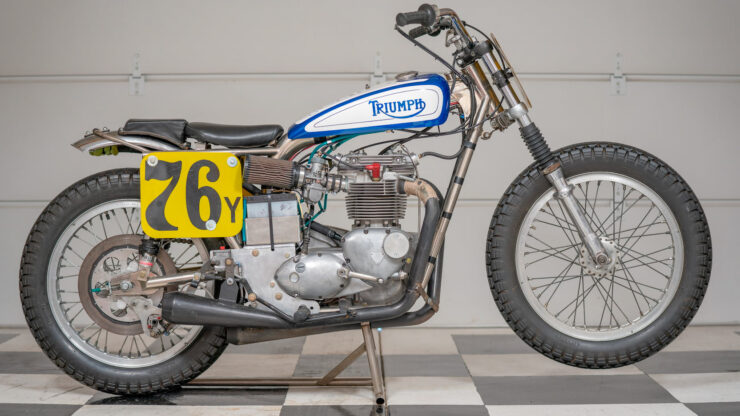 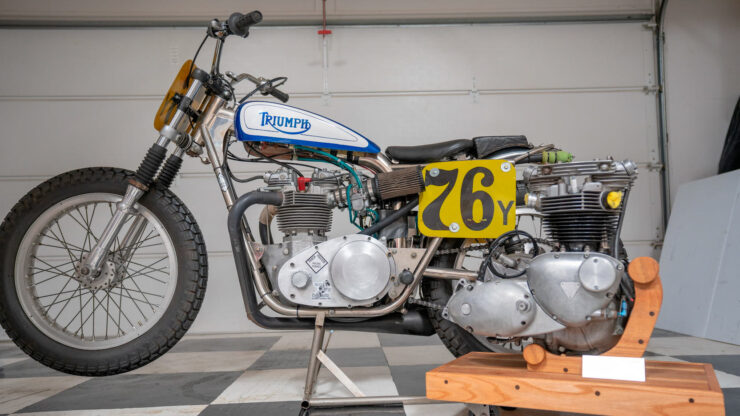 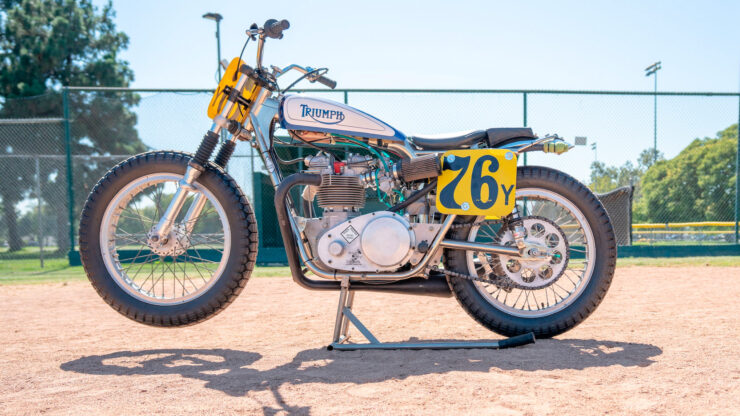