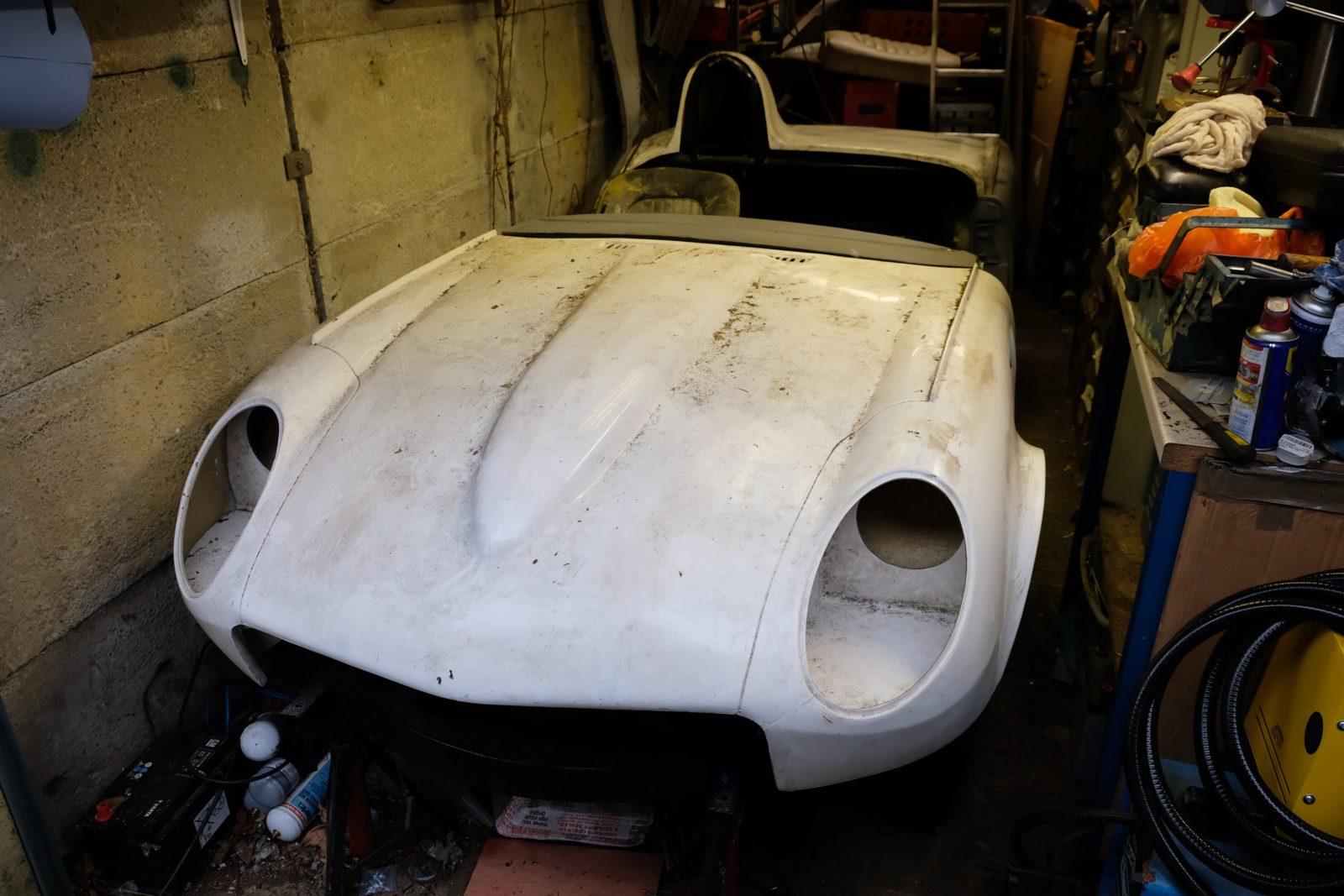 This Triumph GT6 is part way through a restoration to “Roadster Special” specification, with the hardtop coupe body replaced with a new lightweight fiberglass front and rear section, and an original Triumph straight-six engine under the hood.

Those familiar with the history of endurance racing will remember the Triumph GT6 as the road-going version of the Triumph Spitfire hardtop coupe, a class winner at the 1965 24 Hours of Le Mans. It raced alongside cars like the Ferrari 250 LM, Shelby Cobra Daytona, Iso Grifo A3C, MGB, and the Austin-Healey Sebring Sprite.

The Triumph GT6 was released in 1966, it’s a hardtop coupe styled by Triumph’s longtime go-to designer Giovanni Michelotti, it’s based on the basic chassis/body of the then-current Triumph Spitfire 4. 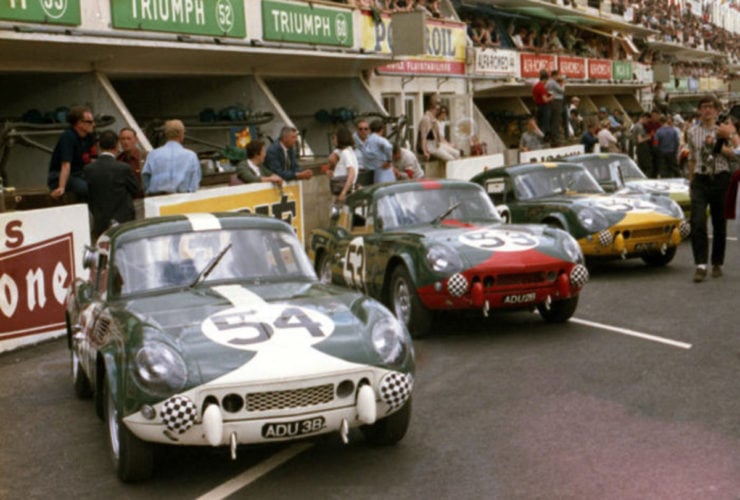 The hardtop coupe Triumph Spitfires at the 1965 24 Hours of Le Mans. The team would achieve a class win over their arch rivals – the MG Midgets.

Unlike the Spitfire 4, a 1.1 liter inline-four cylinder engine powered roadster/convertible, the GT6 is powered by a 2.0 liter straight-six producing 30-40% more power.

The development of the Triumph GT6 began in 1963, when Standard-Triumph sent a Spitfire off to Michelotti in Italy with instructions to turn it into an aerodynamic coupe. The original car was powered by the 1,147cc Spitfire engine which was woefully underpowered for the task, and performance suffered as a result.

The Triumph Racing Department adopted the new Michelotti design for the Spitfire in 1964 as they realized it offered a significant aerodynamic benefit. It turns out they were right, the car took a class win at the 1965 24 Hours of Le Mans over the MG Midgets.

This win brought Triumph a flood of media attention, they quickly developed a road going version of the Le Mans car to capitalize on the publicity. This new car had similar styling to the Le Mans Spitfires but it was powered by a larger 2.0 liter straight-six offering approximately 100 bhp over the 63 bhp offered from the original Spitfire 4 four-cylinder.

Triumph would offer the GT6 as a parallel model to the Spitfire from 1966 to 1973, they made over 41,000 of them over three primary model series, the Mark I, Mark II, and Mark III. 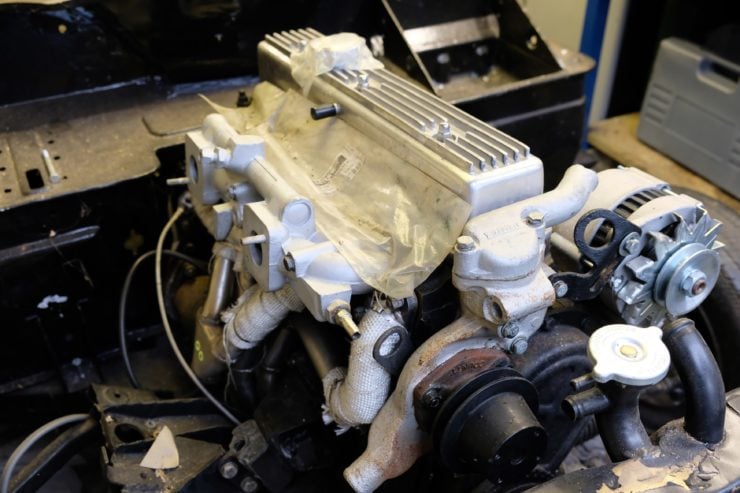 This is a modified version of the Triumph GT6 straight-six engine with wrapped headers and a finned alloy valve cover. In stock form it would produce over 100 bhp, giving the car a top speed of 105 mph.

Today the Triumph GT6 is viewed as a slightly less common alternative to period competitors like the MGB GT. It has excellent club support and spare parts availability, and it’s vastly less expensive than its big brother – the Jaguar E-Type.

The car you see here is only partially completed, though it’s clear that the major parts are all accounted for – chassis, engine, transmission, and primary body sections.

The person who was building this car has suffered a family bereavement that has left them unable to compete the car – so rather than leaving it in the garage to waste away they’re offering it up for sale.

The car currently has a Triumph GT6 engine fitted with a finned alloy valve cover, lightweight front and rear fiberglass body sections are also fitted, though they need finishing and painting.

H&H Classics are due to offer this car for auction on the 16th of February with a starting bid of £10 ($13.50 USD). There’s no saying where the bidding will end up but it’s unlikely to go beyond the mid-four figures.

If you’d like to read more about this unusual project car or register to bid you can click here to visit the listing. 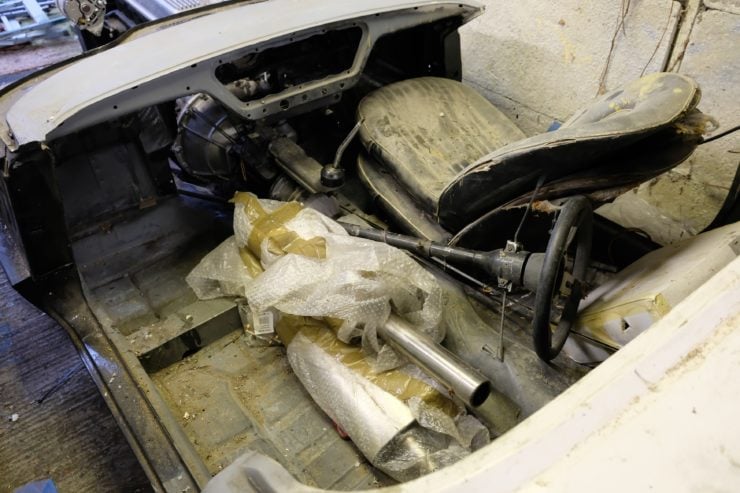 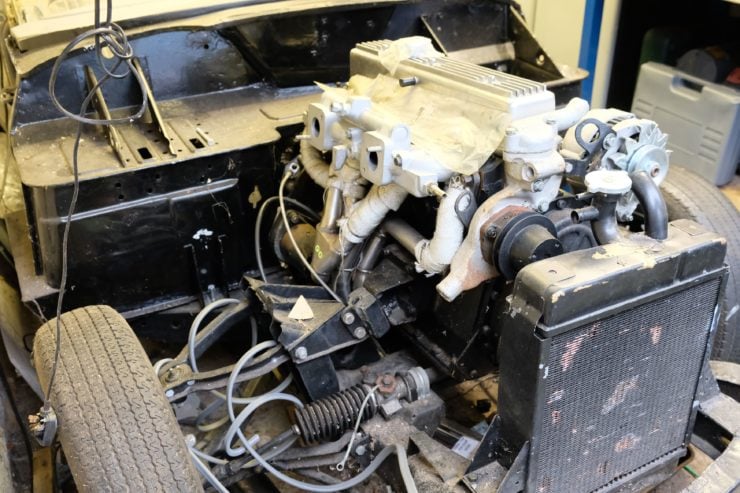 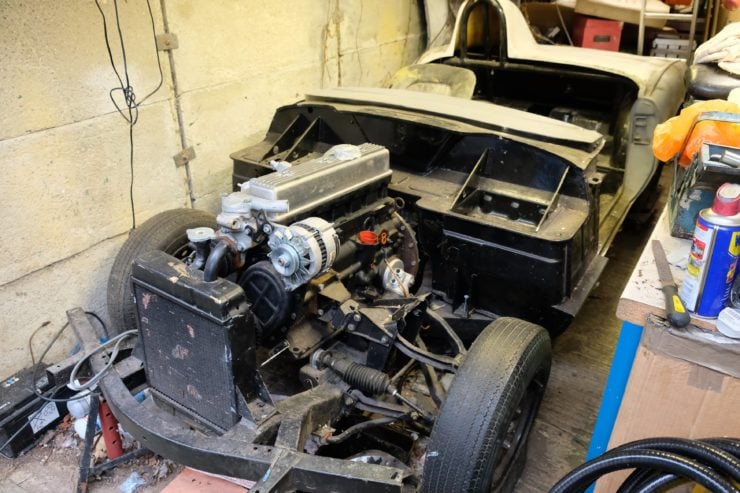 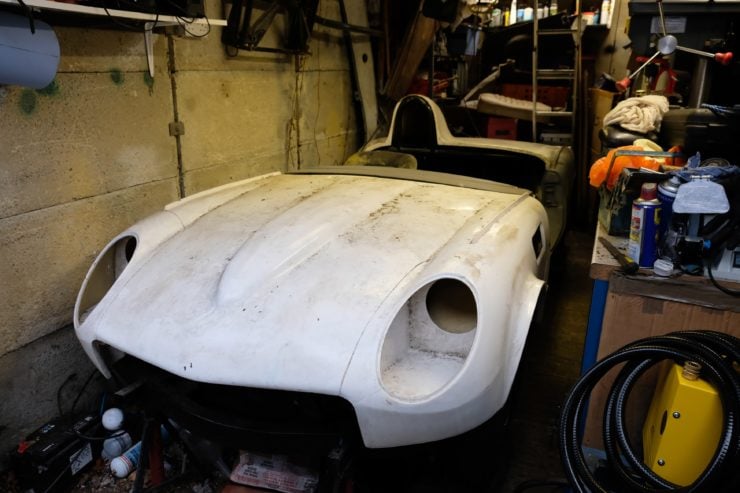 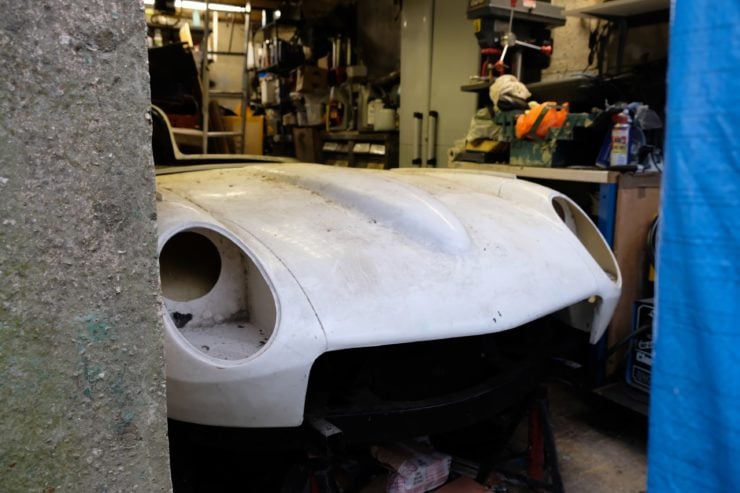 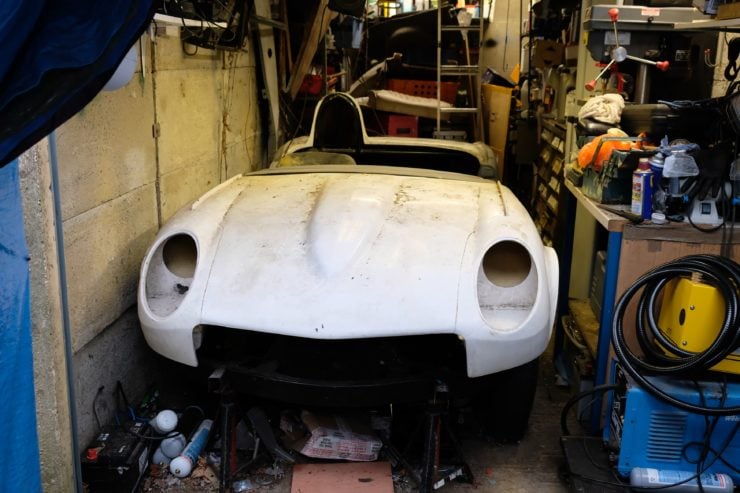 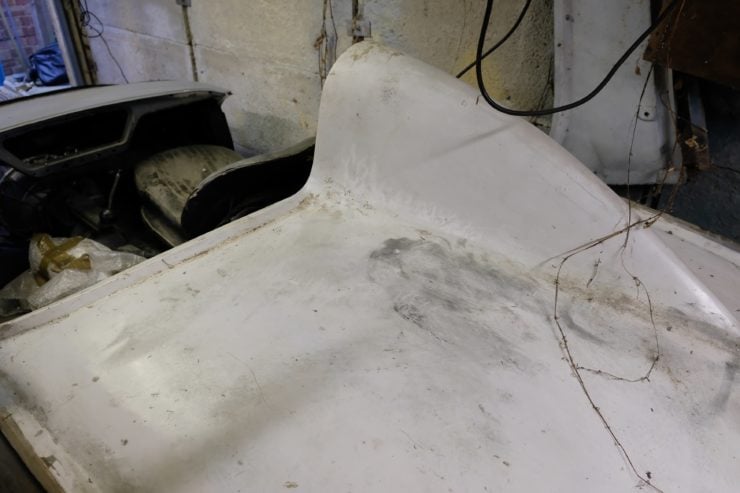 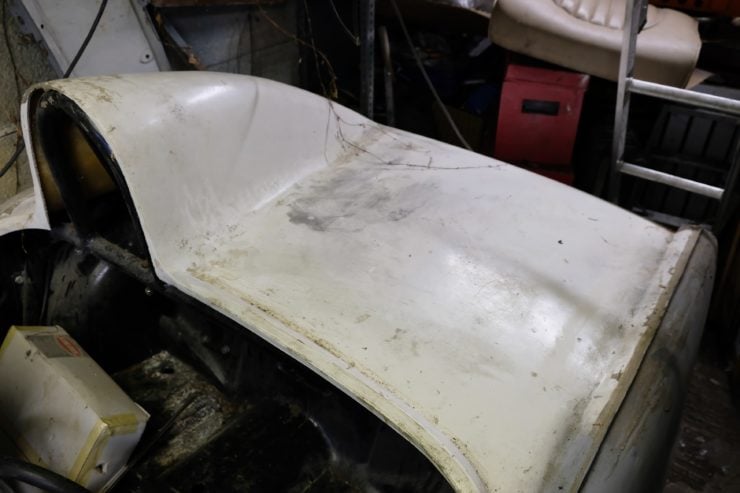 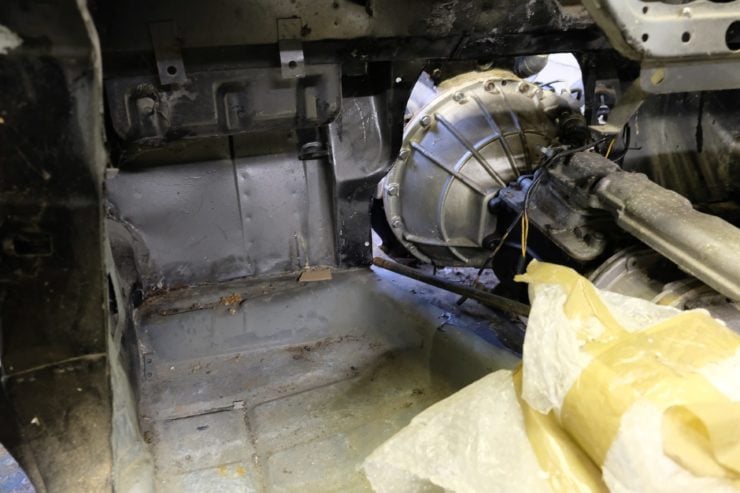