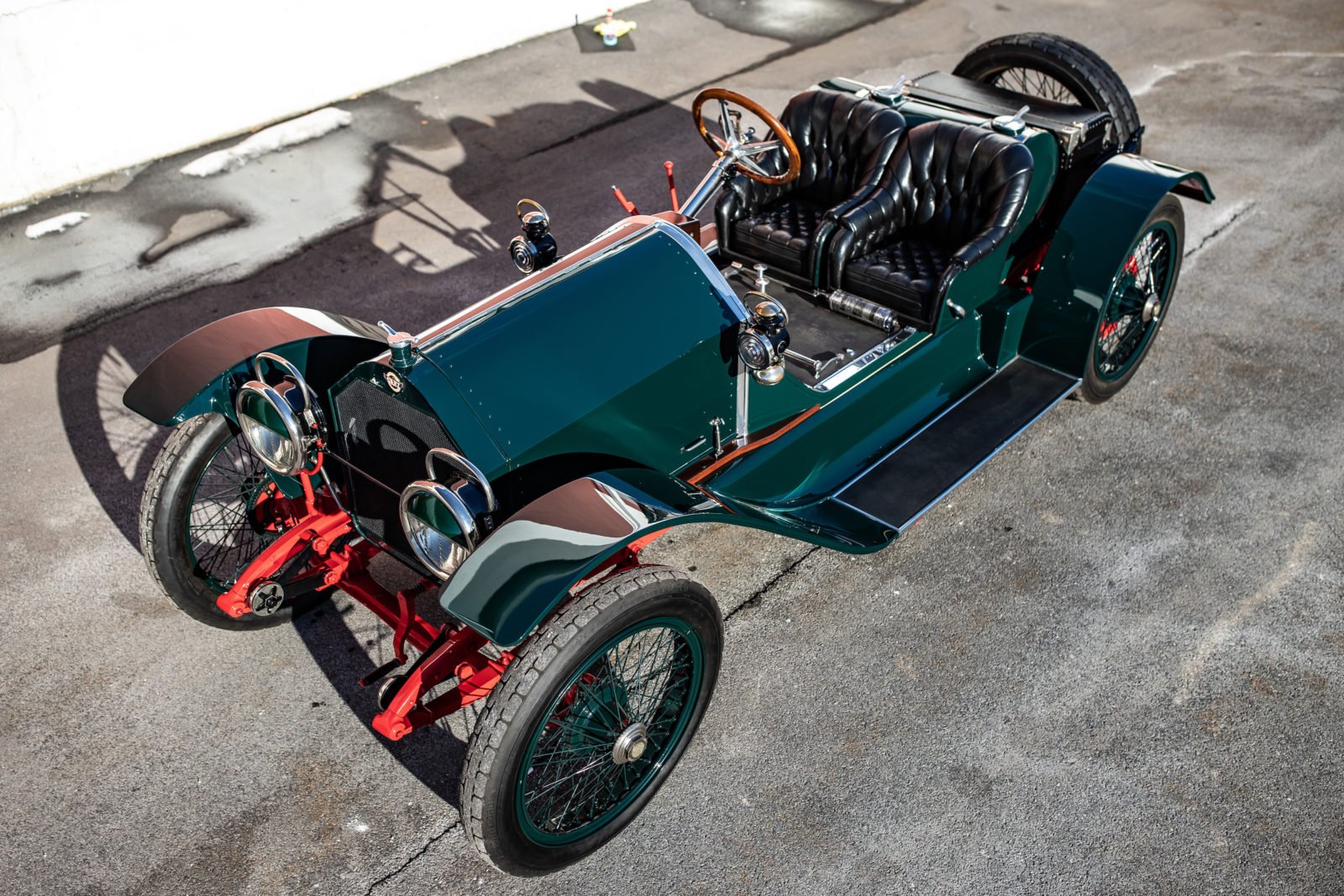 The Stutz Bearcat was introduced in 1912 as the road-going version of the Stutz Indianapolis 500 racing car. Bearcats would win 25 of the 30 races in which they were entered in 1912, and Erwin “Cannon Ball” Baker would famously set a new coast-to-coast record in one.

The Car That Made Good In A Day

In 1911 a man named Harry Stutz spent a feverish five weeks building a new car, the project was rushed as the vehicle needed to be ready to compete in the Indianapolis 500 motor race against a field of 40 of the fastest cars in the country. 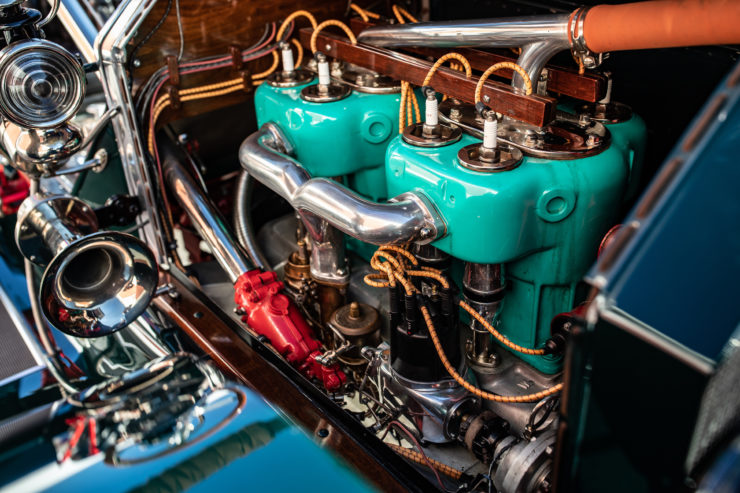 The early Stutz Bearcats were powered by the engine you see here, a 390 cubic inch (6.4 liter) Wisconsin T-head four-cylinder engine with four-valves per cylinder and an updraft Stromberg carburetor producing 60 bhp.

The 1911 Indianapolis 500 was the first ever running of the event, no one knew how popular it would become but the eyes of the nation were on the drivers and machines competing in what was one of the most challenging endurance races of its time.

By the time the checkered flag fell Norwegian driver Gil Andersen had singlehandedly driven the Bear Cat for 7 hours 22 minutes and 55 seconds, completing 13 pitstops, averaging 62 3/8 miles per hour. Perhaps most importantly, he finished one place ahead of Hughie Hughes in his Mercer.

Company advertising materials celebrated the surprising success of the Bear Cat, calling it “The car that made good in a day.” Stutz immediately set to work capitalizing on this success, he developed a road-going version of the Bear Cat and changed the name slightly to “Bearcat” – all one word.

When the new car was released in 1912 the company announced: “We are now building duplicates of this ‘car that made good in a day’ with absolutely the same material, workmanship, and design.” 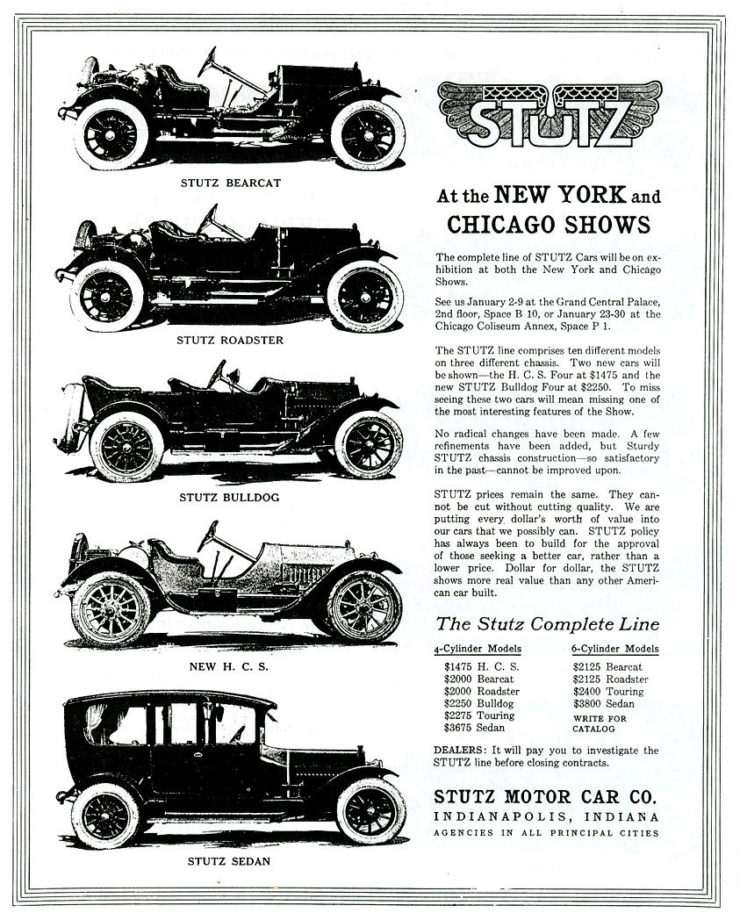 Early ads for the Bearcat, like this example from 1914, typically showed the car as the top of the line model.

Many wealthy Americans wasted no time placing their orders for this new high-performance machine that was capable of the almost unimaginably high (for the era) top speed of 80 mph.

The first examples of the Stutz Bearcat were powered by the 390 cubic inch (6.4 liter) Wisconsin T-head four-cylinder engine with four-valves per cylinder and an updraft Stromberg carburetor. The 60 hp produced by this engine was sent to the rear wheels via a three-speed manual transaxle of Harry Stutz’s own design.

With its front and rear leaf spring suspension, low slung chassis design, and powerful engine, the Bearcat was one of the fastest vehicles on the road anywhere in the world, equivalent today to cars like the Bugatti Chiron, McLaren P1, or the Koenigsegg Agera RS.

The Bearcat would stay in production from 1912 into the early 1920s, its enduring fame and reputation saw Stutz bring a new model using the name into production during the Great Depression years of the 1930s however it wasn’t enough, and the company folded. 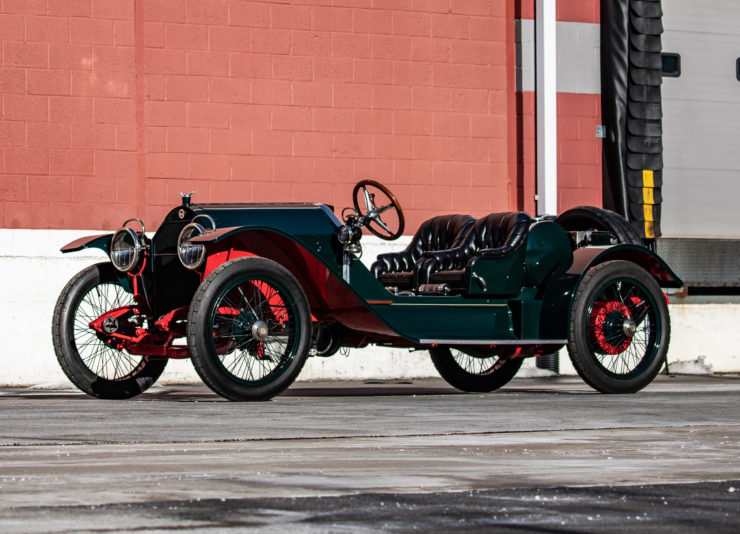 The low-slung chassis developed for the car by Harry Stutz allowed it to ride lower than many of its rivals, giving it a lower center of gravity and improved handling.

In the decades since a few attempts have been made to bring a new car to market called the Stutz Bearcat, replicas have been made including two by legendary car customizer George Barris for use in the 1971 TV Series “Bearcats!”

Interestingly the The Velvet Underground’s 1970 song “Sweet Jane” mentions a Stutz Bearcat in the second verse, an indication of the car’s enduring effect on American culture.

Riding that Stutz Bearcat Jim
You know, those were different times
All the poets they studied rules of verse
And those ladies, they rolled their eyes

– Sweet Jane by The Velvet Underground

One of the most famous feats in a Bearcat was the record breaking coast-to-coast drive completed by Erwin “Cannon Ball” Baker from Los Angeles to New York City in 11 days, 7 hours, and 15 minutes. An achievement made all the more remarkable when you remember that America had no highways or interstates in those days – it was mostly dirt tracks and the maps were far from accurate. 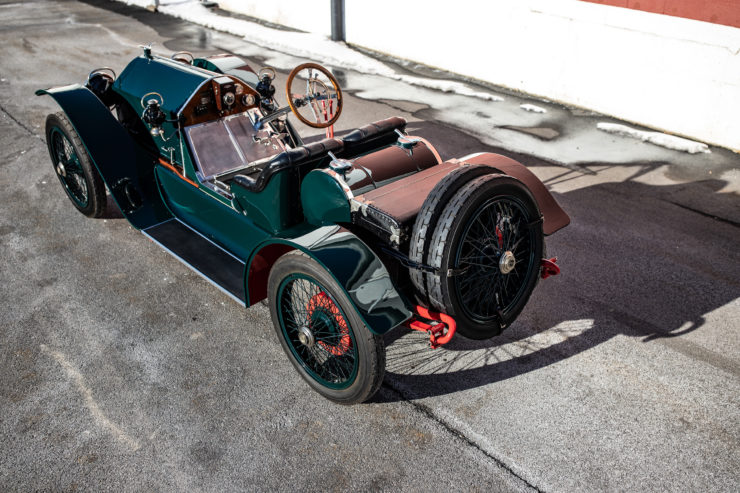 Very little bodywork was fitted to early Bearcats, they had a “doghouse” engine compartment, two seats, headlights, fenders, and a cylindrical fuel tank in the rear. A rear trunk and spare tires could be carried when needed.

The car you see here is a 1913 Series B version of the Stutz Bearcat and it has a more interesting backstory than most, its remains were rediscovered on a ranch in the 1970s by a pair of aerial surveyors doing work in Montana.

After it was acquired a number of original parts were sourced and kept with the car, but the restoration didn’t begin in earnest until the early 2000s when the project was taken over by new custodians – a father and son team.

The two men did a remarkable job sourcing the additional parts that were needed from Harrah’s, the Los Angeles County Museum, and Paul Freehill. The restoration of the car was documented in the October-December 2009 issue of the Stutz News club publication.

The Bearcat is now part of a respected collection and it’s due to be auctioned by RM Sotheby’s on the 5th of March with a price guide of $350,000 – $450,000 USD. If you’d like to read more about it or register to bid you can click here to visit the listing. 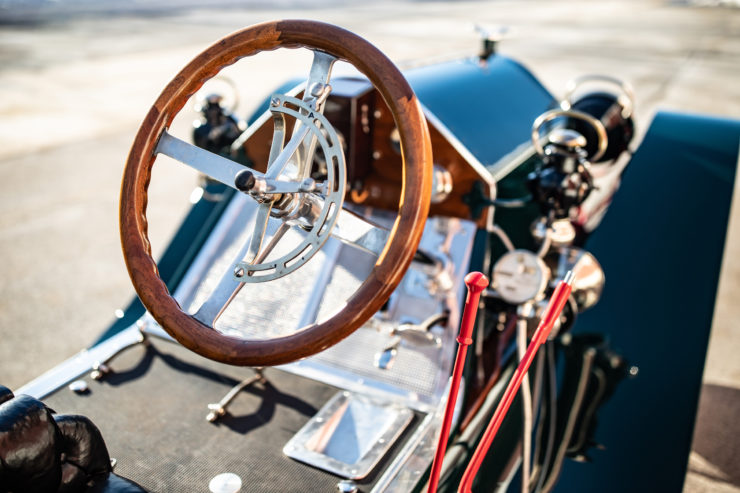 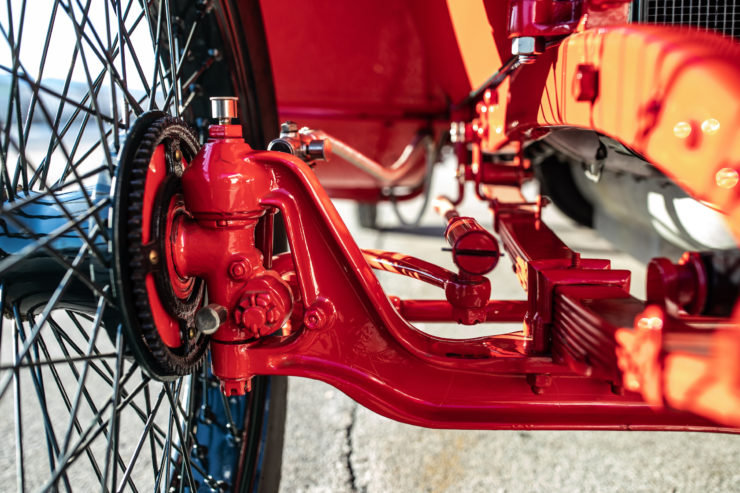 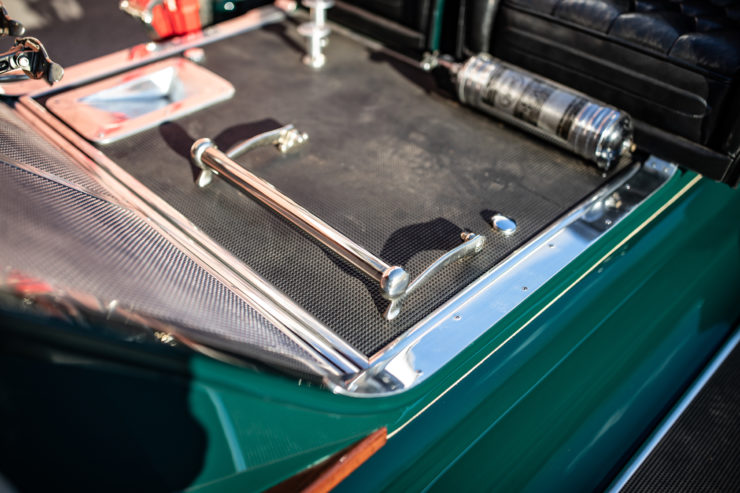 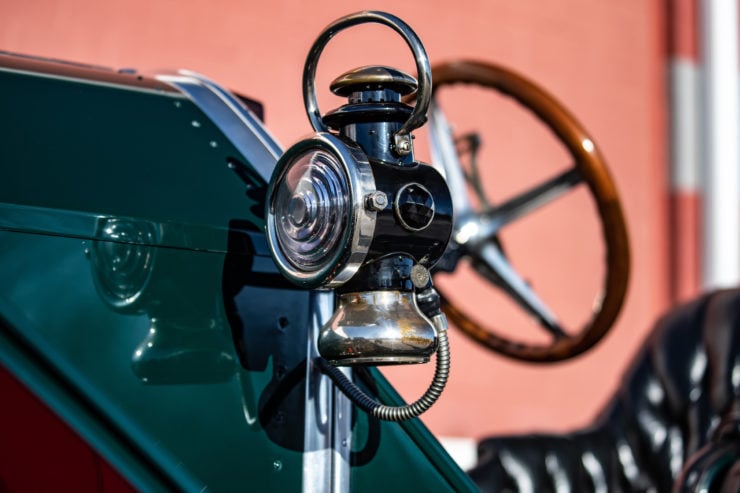 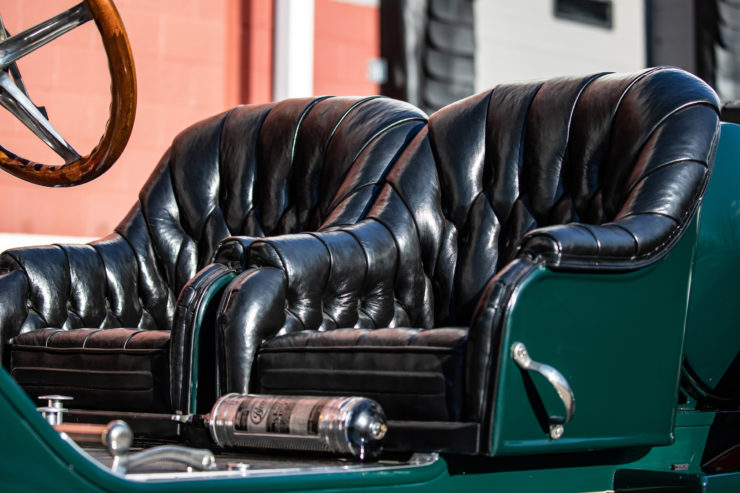 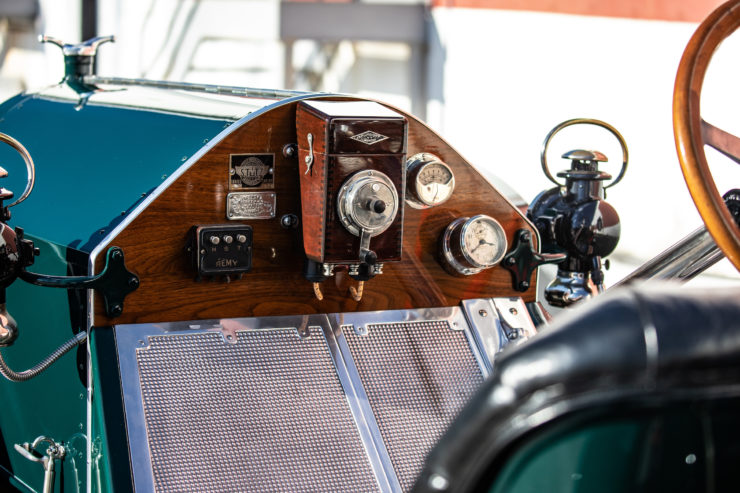 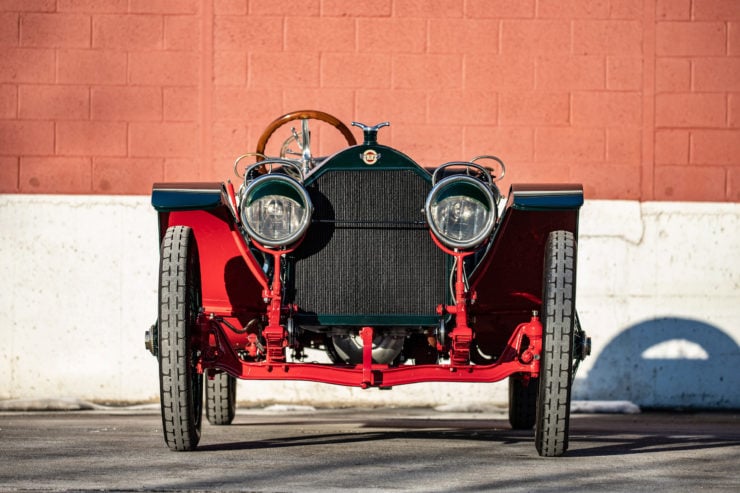 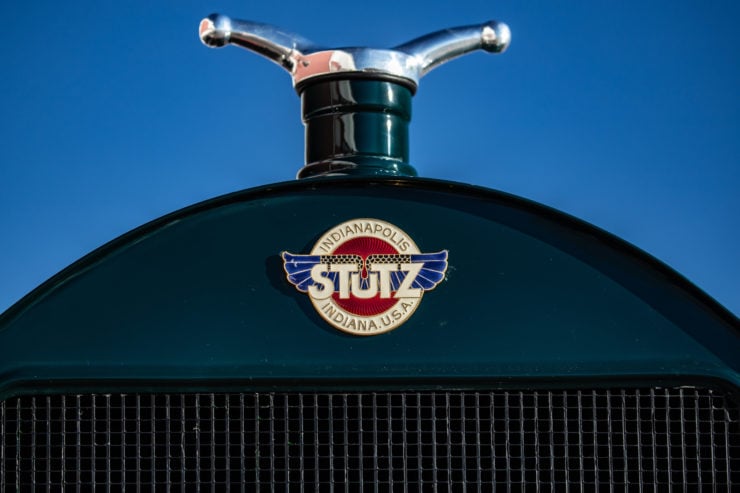 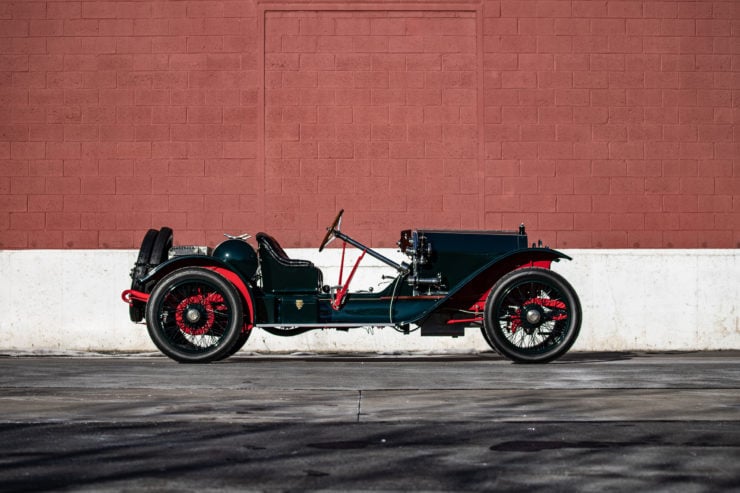 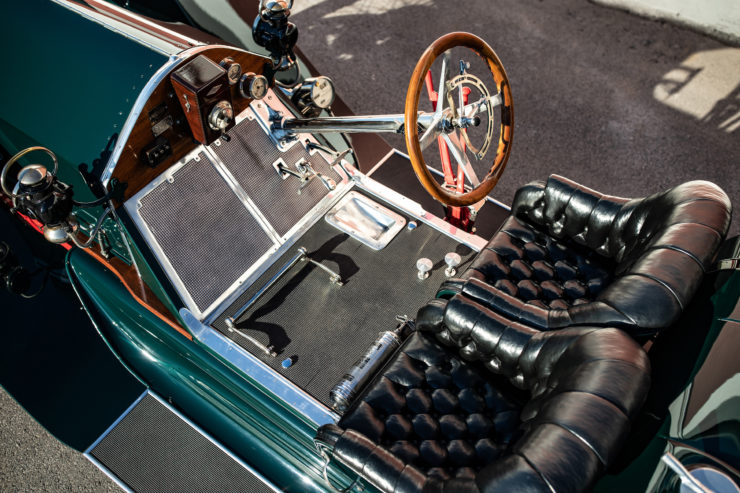 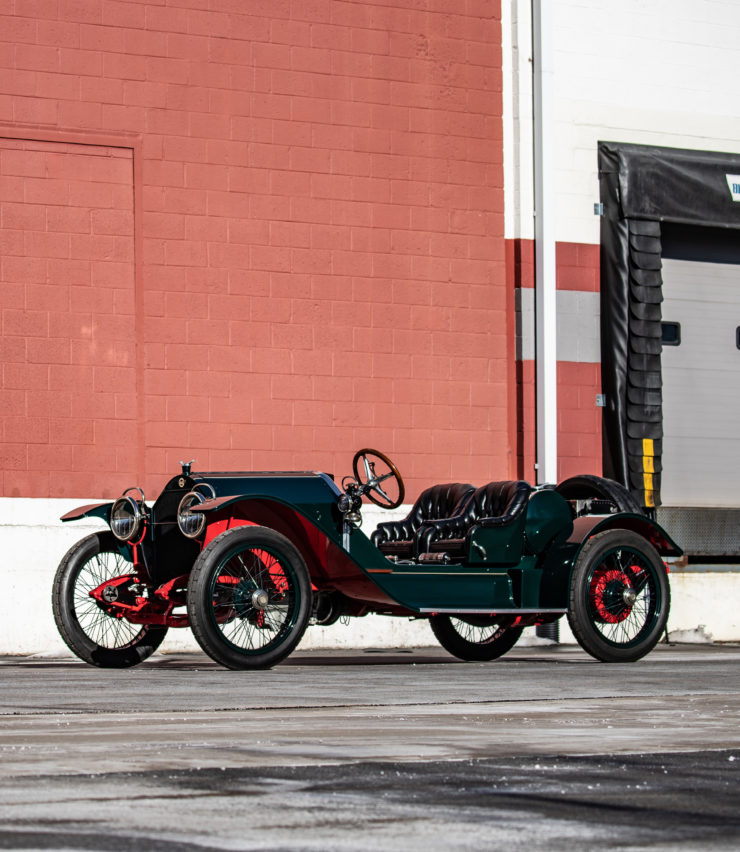