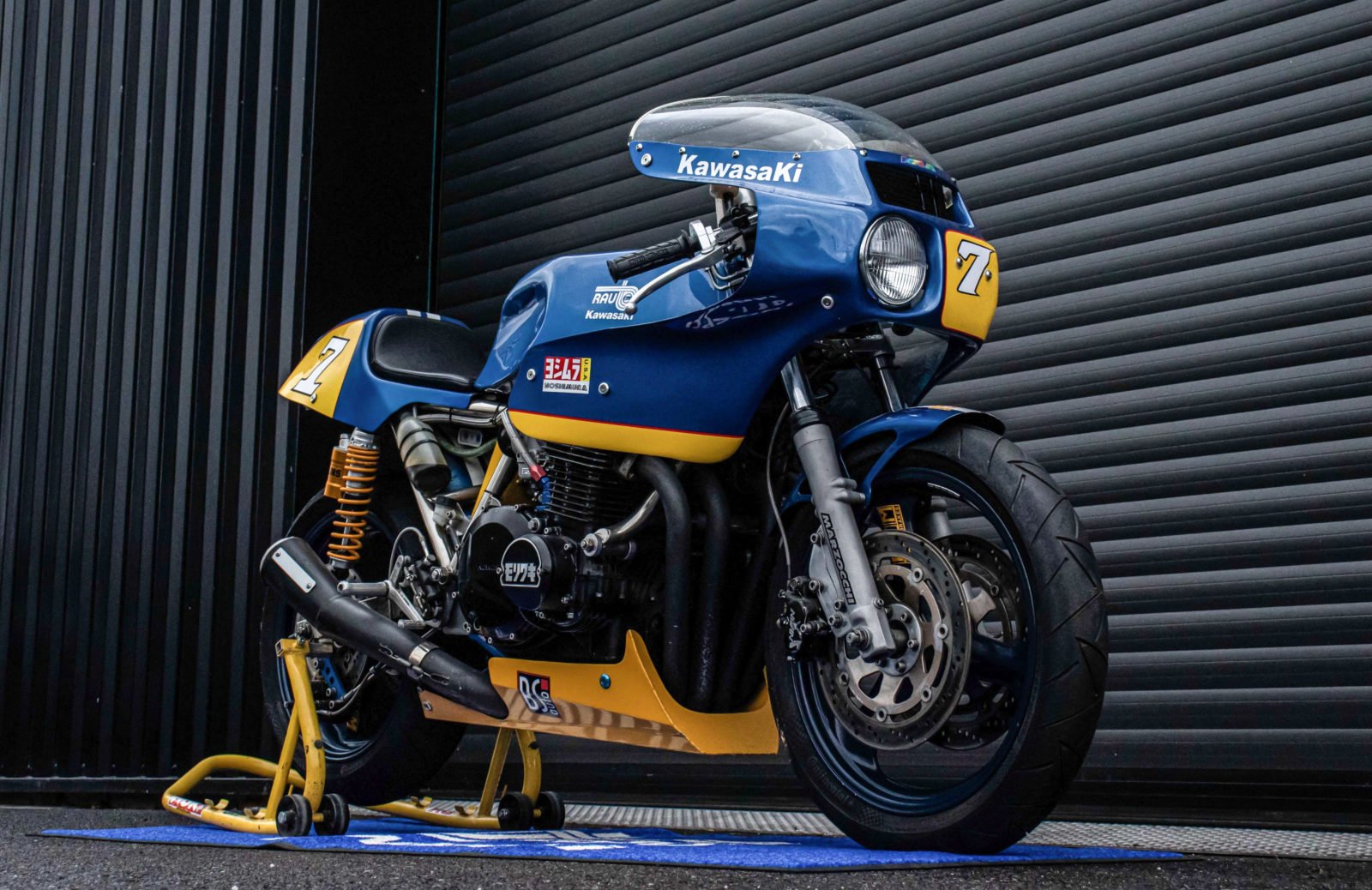 This is a rare Rau Kawasaki race bike from 1983. “Rau” is the surname of Manfred Rau, a German motorcycle frame designer and engineer who built many race-winning bikes in period.

Much like his contemporaries Fritz Egli, Bimota, and the Rickman Brothers, Rau would develop vastly improved motorcycle frames and pair them with better suspension and brakes. The resulting motorcycles would be considerably quicker around a circuit than their production bike siblings.

Born in 1943 in Grossbettlingen, near Stuttgart in the south west of Germany, Manfred Rau would rise to become one of the preeminent motorcycle chassis designers in Europe by the time he was in his early 30s. 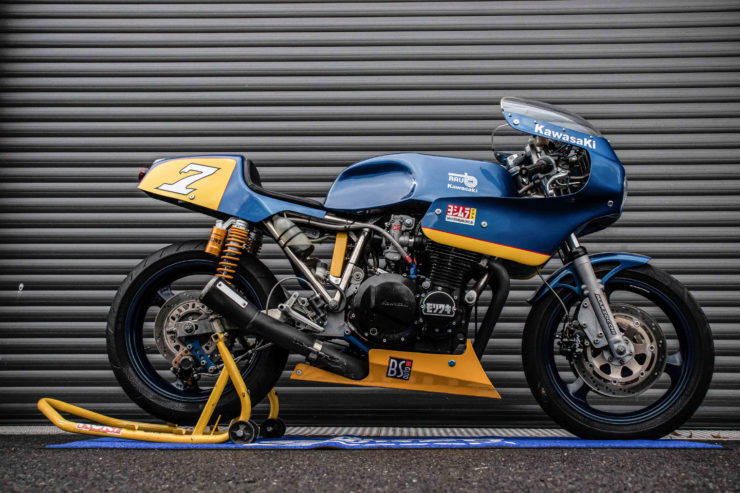 With a much lower kerb weight and 143 bhp, this vintage superbike would still be capable of embarrassing many far more modern bikes, in the right hands of course.

Rau studied the designs of frame designers like Fritz Egli with his famous steel backbone chassis Vincent Black Shadows. He also looked south to the work of Valerio Bianchi, Giuseppe Morri, and Massimo Tamburini of Bimota in Italy.

Taking inspiration from these motorcycle industry mavericks, Rau developed his own unique take on the ideal motorcycle frame design – he then applied it to many different motorcycles with great success both on the race track and on the street.

In 1985 Manfred Rau sold his designs, frame jigs, and intellectual property to PS-Schuppen (PSS) run by Rainer Weidlich. PSS had been a Rau frame dealer for years by this point, and they were well equipped to take over the day to day operations of Rau.

Tragically, Manfred Rau died suddenly at the age of just 48 in 1991. Today his frame designs aren’t nearly as well known as those by Egli or Bimota though they certainly deserve to be. 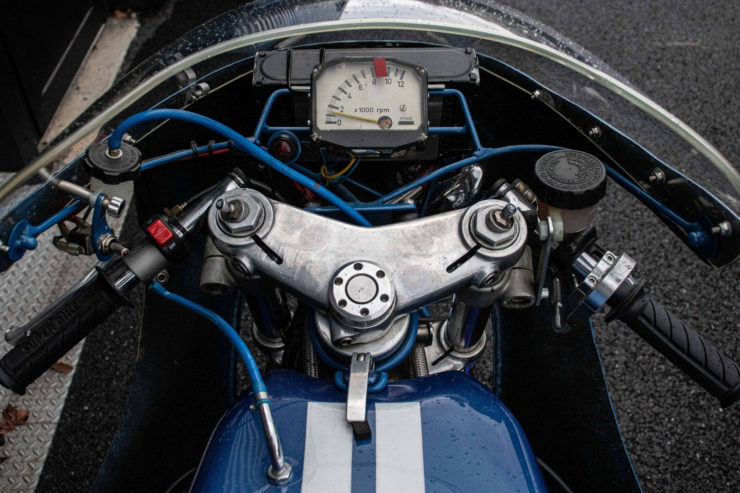 No speedometer is needed, just a tachometer with a band of red tape at 8,000 rpm – the engine speed the engineers would really rather you didn’t surpass.

The Kawasaki GPZ1100 was first unveiled in 1981 and sold until 1985. It was one of the fastest superbikes in the world at the time thanks to its 1,089cc inline-four cylinder engine with double overhead cams and electronic fuel injection that produced 105 – 120 bhp in factory trim depending on year.

Manfred Rau liked the engine in the GPZ1100 but not much else. His vision for the bike called for it to be far lighter than its original 250+ kilogram (550+ lb) kerb weight, with better suspension and an engine tuned to produce almost 40% more power.

Rau’s frame for the GPZ1100 is of the tubular steel backbone design, the engine is used as a stressed member and the frame itself is nickel-plated for corrosion protection. A pair of Marzocchi forks are fitted up front with twin four-piston brakes with dual floating rotors, and there’s a matching Nissin single disc on the rear. 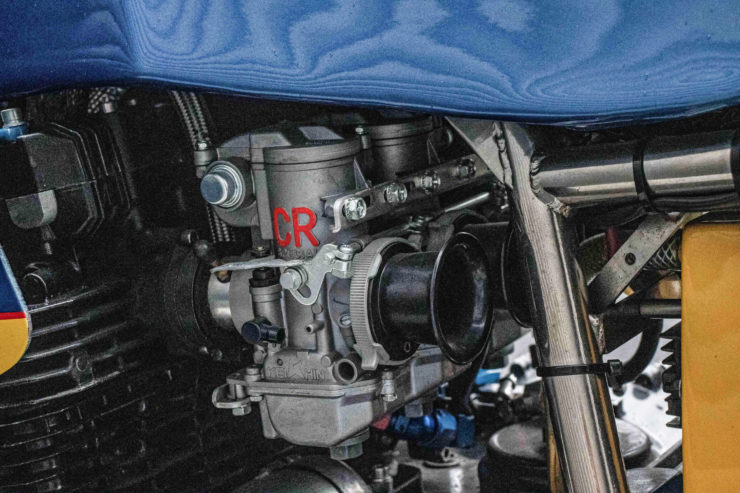 The four Keihin CR racing carburetors are fitted with velocity stacks and no air filters, to ensure maximum airflow into the cylinders.

Custom bodywork was developed for the bike, there’s a half fairing up front that takes its inspiration from the endurance racing motorcycles of the day. An alloy fuel tank was shaped up and bolted into place, with a matching seat and rear cowl.

We don’t have a full list of changes that were made to the engine, we just know that it’s now fitted with a bank of four Keihin Flat-CR racing carburetors, and that it’s producing 143 bhp.

If you’d like to read more about this highly unusual vintage race bike you can click here to visit the listing on Artcurial, the price guide is $28,200 USD – $39,450 USD.

* Interestingly the listing explains that the bike comes with its German title, it will be road registrable as a historic motorcycle in many countries with some modifications, including the addition of a speedometer. Buyers will need to check their local regulations prior to bidding. 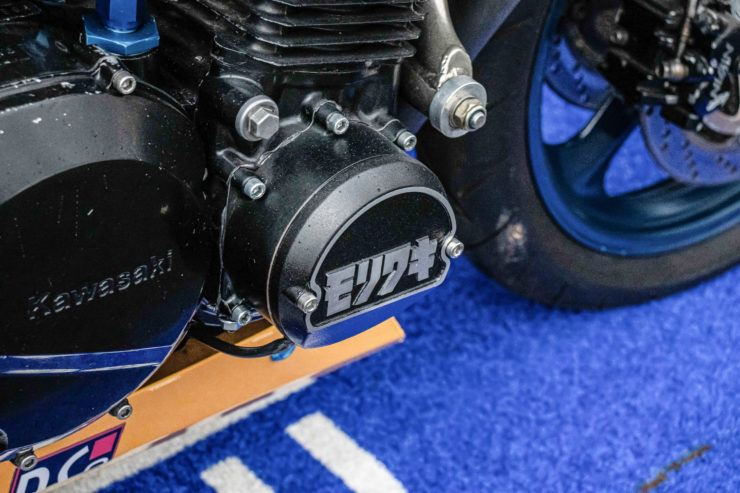 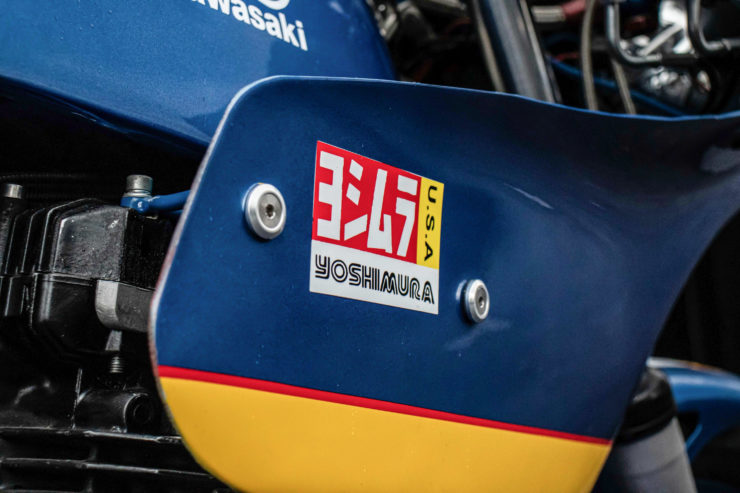 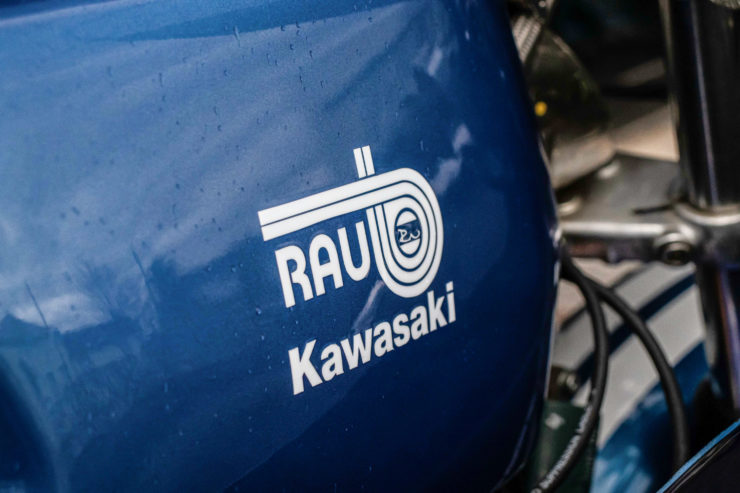 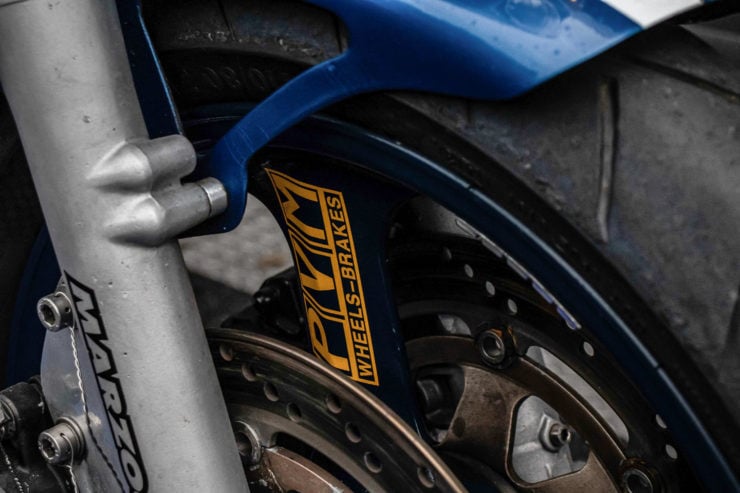 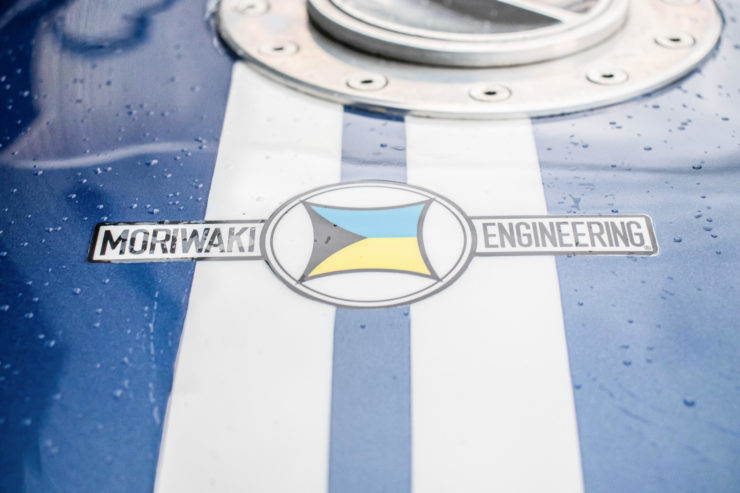 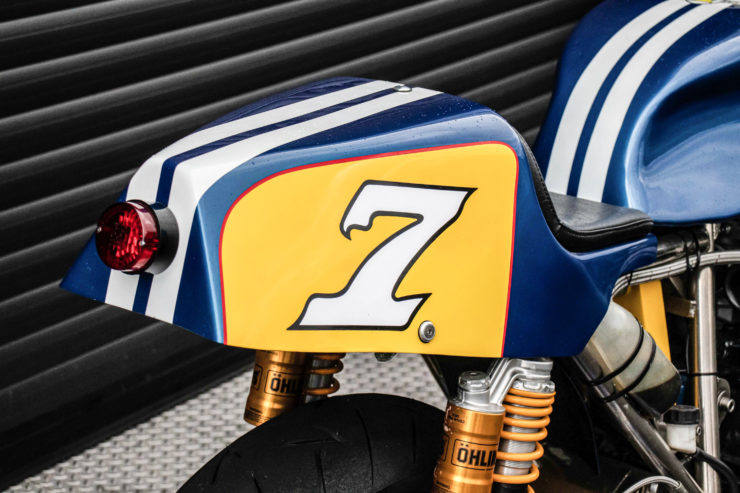 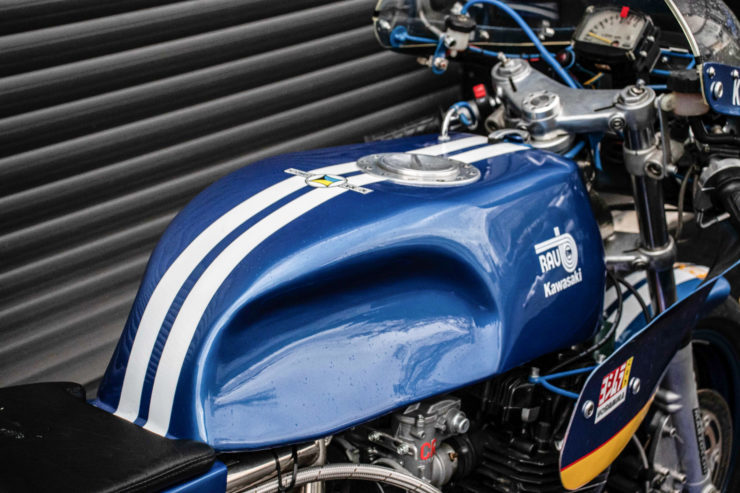 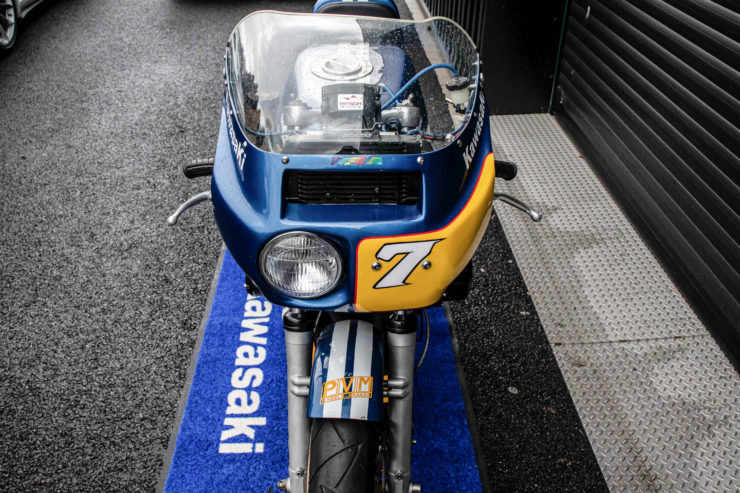 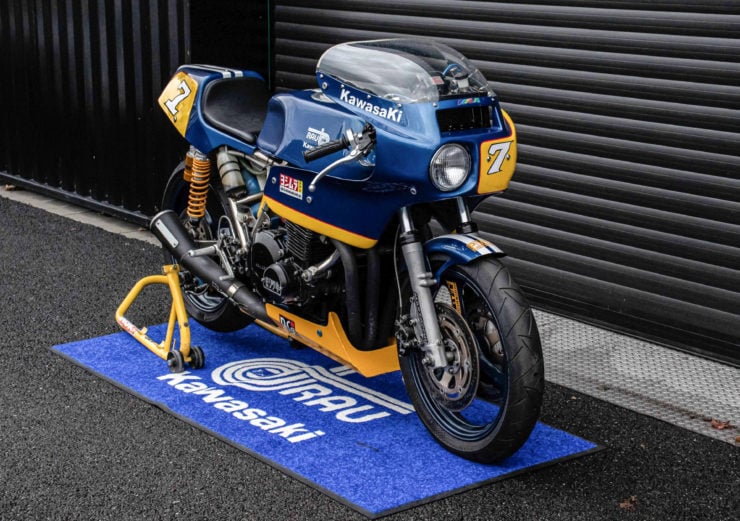 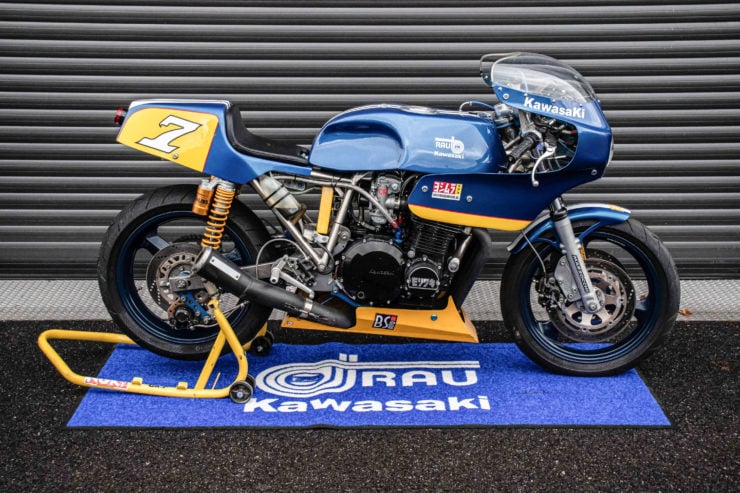 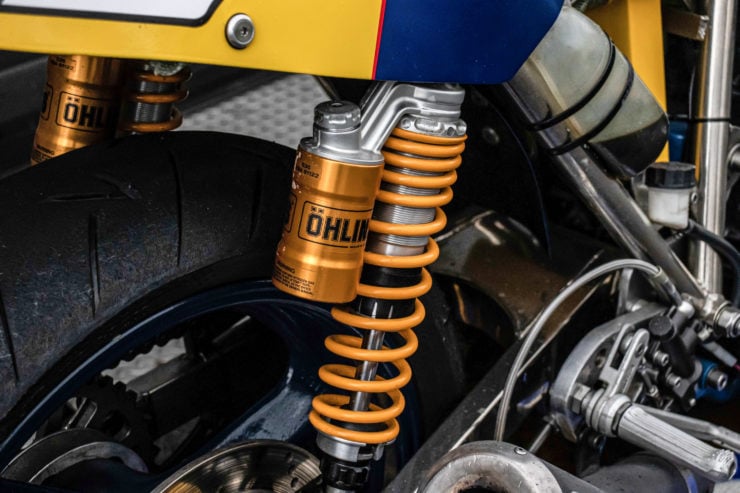