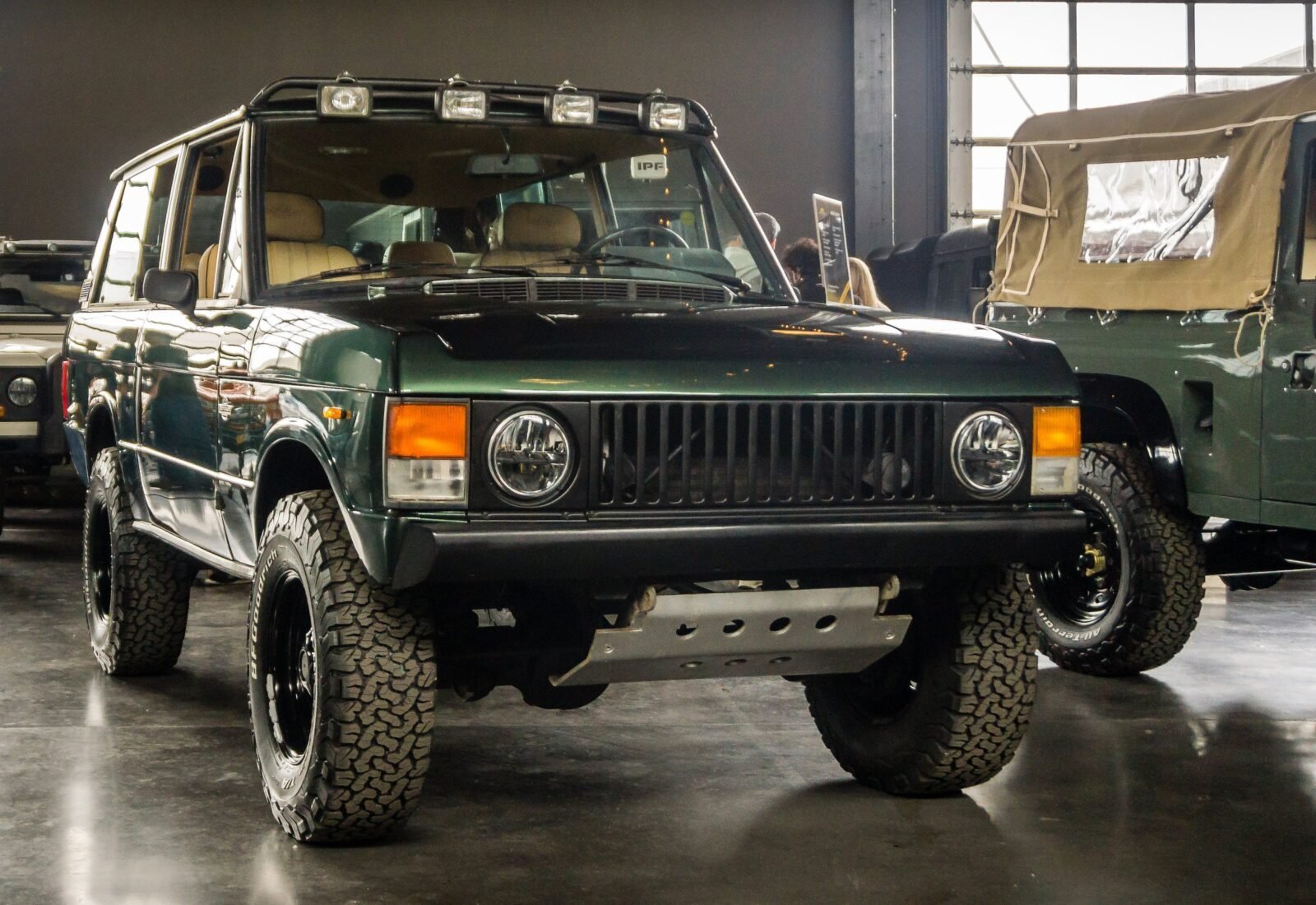 This is a comprehensively rebuilt Range Rover Classic two-door by the team at Legacy Overland, it’s described as a “street dog” 4×4 as it’s a bit of a mongrel, having been built from the parts of three Range Rovers.

The chassis come from a Suffix B model from 1973, the body is from a 1983 Range Rover, and the engine comes from a mid-1980s model, and the 5-speed transmission is from a late-80s version.

The specification sheet from the rebuild makes it clear that this Range Rover is considerably more capable off-road than its all-original contemporaries. That’s saying something as no one in their right mind has ever accused the Range Rover Classic of being anything less than highly capable off-road. 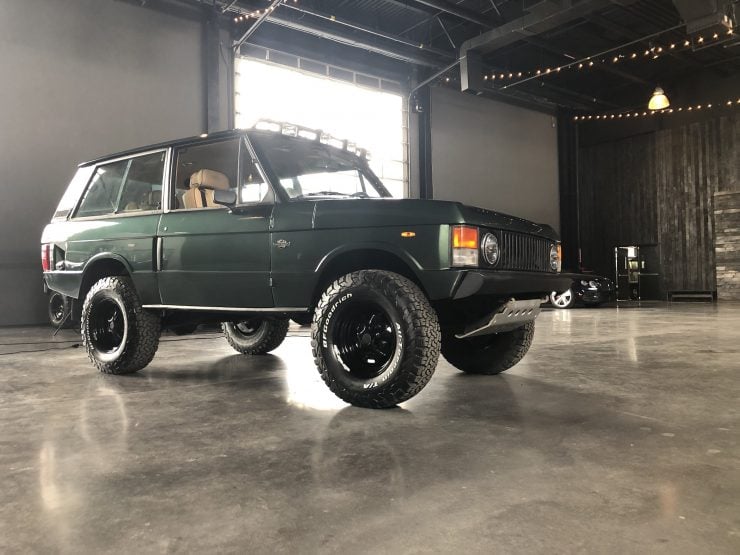 When the first Range Rover was released in 1970 is was marketed as “A Car For All Reasons” and automotive historians look back on it as one of the first luxury SUVs.

The capabilities of the Range Rover were nothing to sniff at, it was able to reach speeds in excess of 100 mph, it could tow upwards of 3.5 tonnes, it could seat 5 adults, it offered disc brakes on all four corners as standard, and of course, it had a dual range gear box with four speeds and permanent four wheel drive.

Unlike many 4x4s at the time, the Range Rover was fitted with coil springs on all four corners rather than leaf springs, this improved ride quality as well as wheel articulation off road. 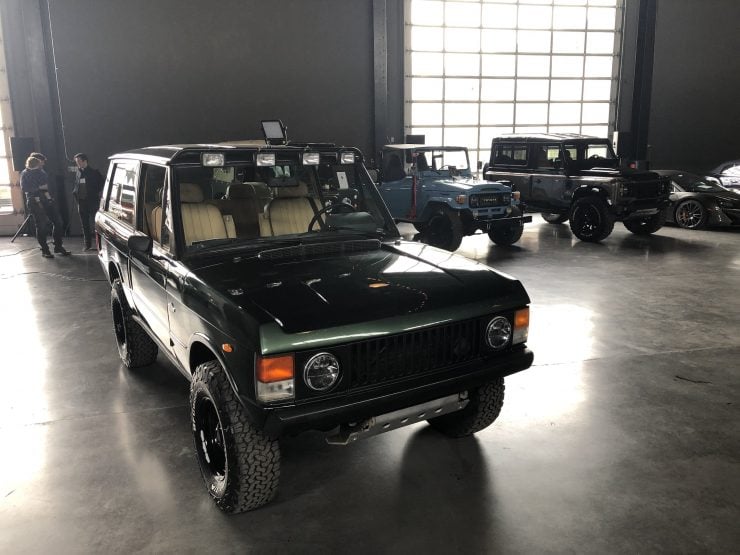 Consistent upgrades were made to the model over the years including air-conditioning, leather interiors, plush carpeting, power steering, power windows, surround sound stereos and a slew of other luxuries that had previously only been available on high-end road cars.

Luxury SUVs are now one of the most lucrative genres for automakers, with Aston Martin, Bentley, Jaguar, Rolls-Royce, Mercedes-Benz, BMW, AUDI, and even Lamborghini all offering models to compete with Range Rovers.

The Range Rover you see here is one of a new breed of fully restored and improved models offered by Legacy Overland.

Each build from the company starts with a full teardown and an inspection of parts, followed by a meticulous rebuilding process that improves the car while keeping it within the spirit of the age in which it was designed and built originally. 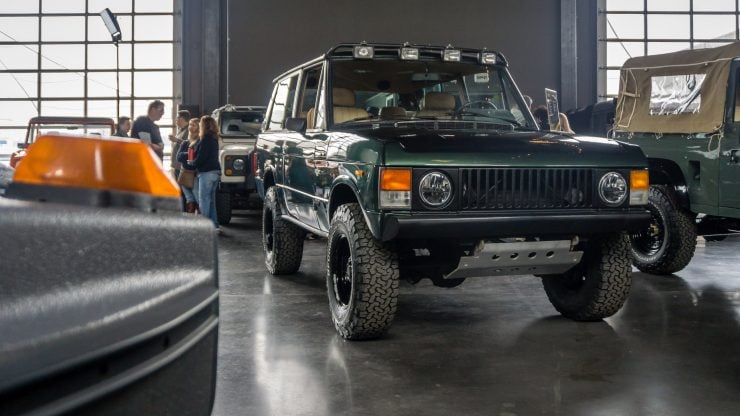 This build was more complex at most because it involved major parts from four different Range Rovers, creating a chimera of sorts that Legacy Overland lovingly refer to as a “mutt”.

During the rebuild the vehicle received a rebuilt Rover 3.5 litre V8 with twin SU carburettors, a 5-speed manual gearbox, an original Hi/Lo transfer case, disc brakes front and rear, power steering, tough 16” Rostyle wheels in glossy black, BF Goodrich All Terrain 265/75×16” tires, a 4” lift in the rear and a 3” lift up front.

For rust protection the undercarriage has been coated with Tectyl, and steel braided brake hoses replaced the original rubber units to ensure top notch stopping ability. Air conditioning is fitted as well as a Pioneer Bluetooth enabled media receiver with four speakers.

The seats were all upholstered by hand with cream material and green trim to match the carpeting, and the seats include modern three-point seatbelts front and rear. Up top there’s a light bar with four lamps over windshield for better visibility at night, and there’s a purposeful bash plate under the front bumper. 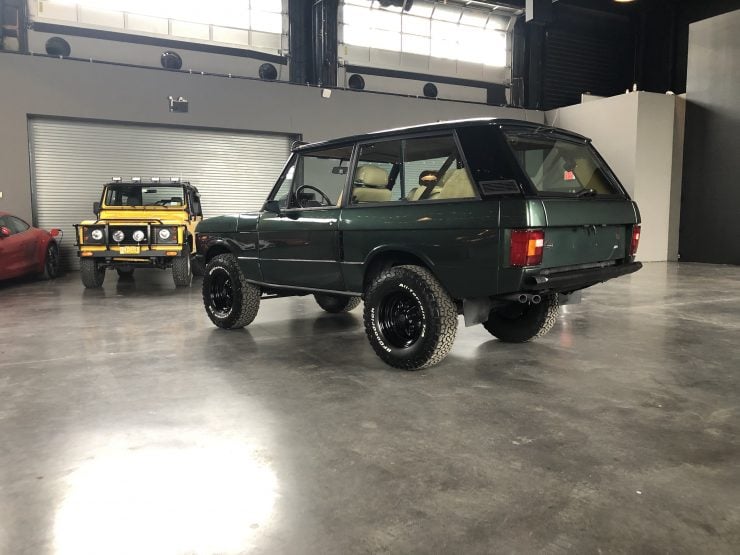 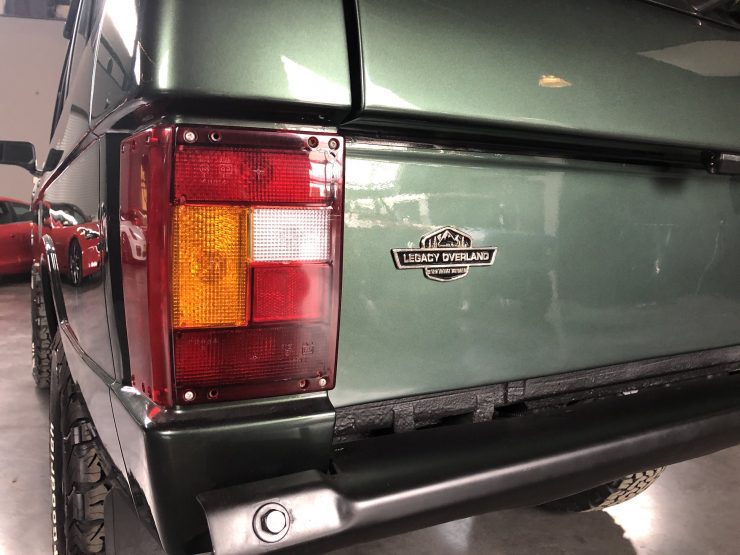 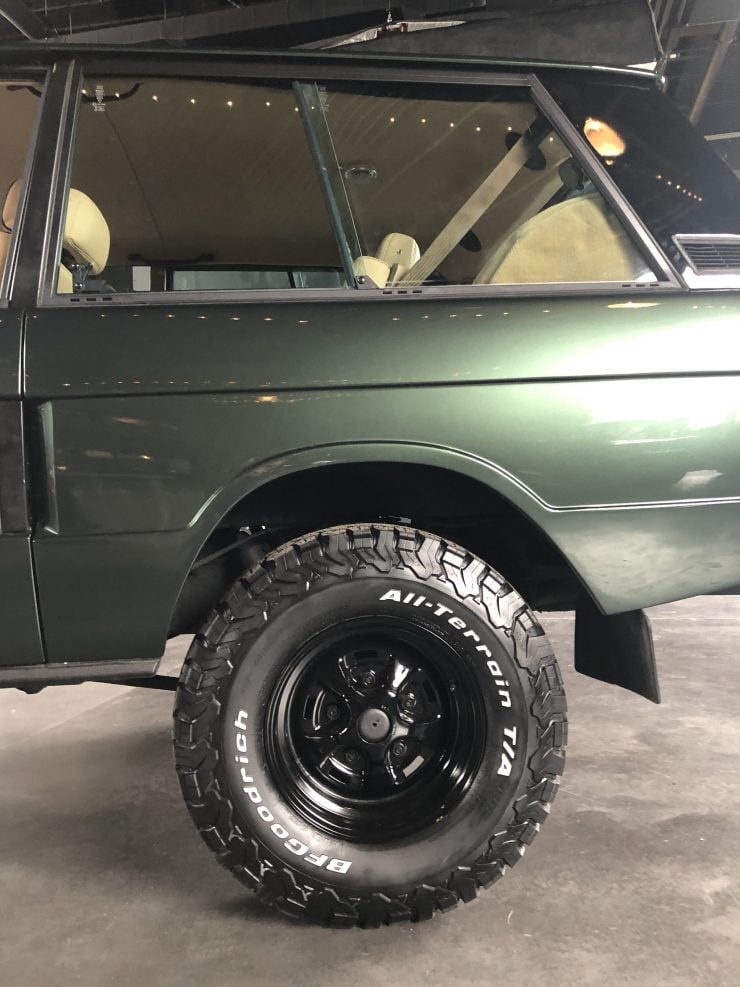 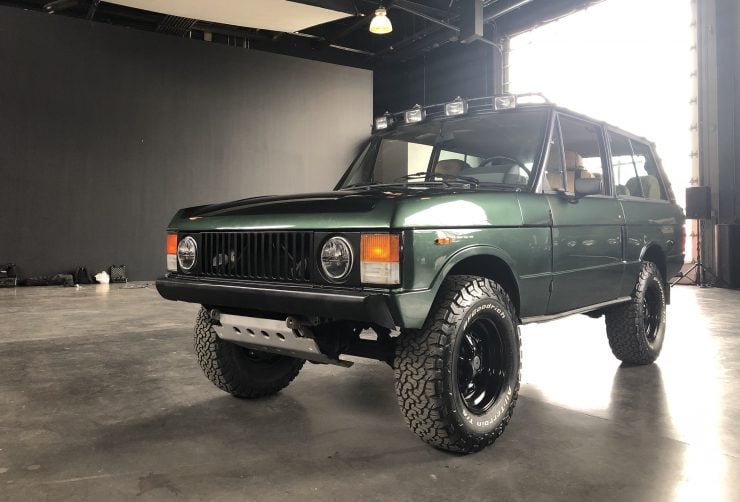 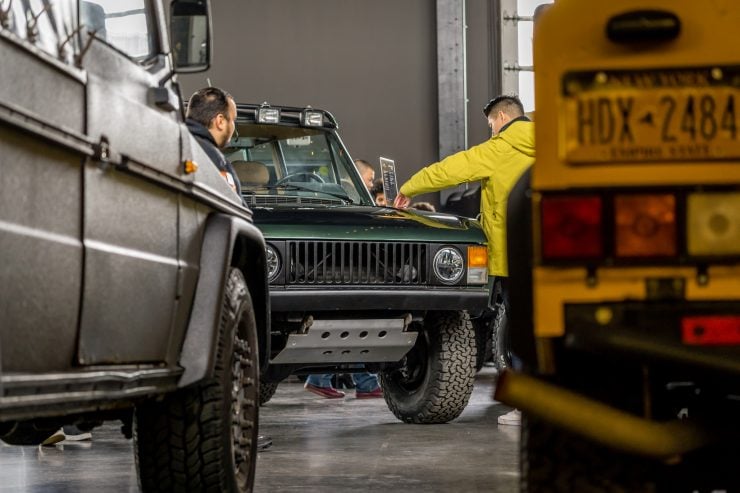 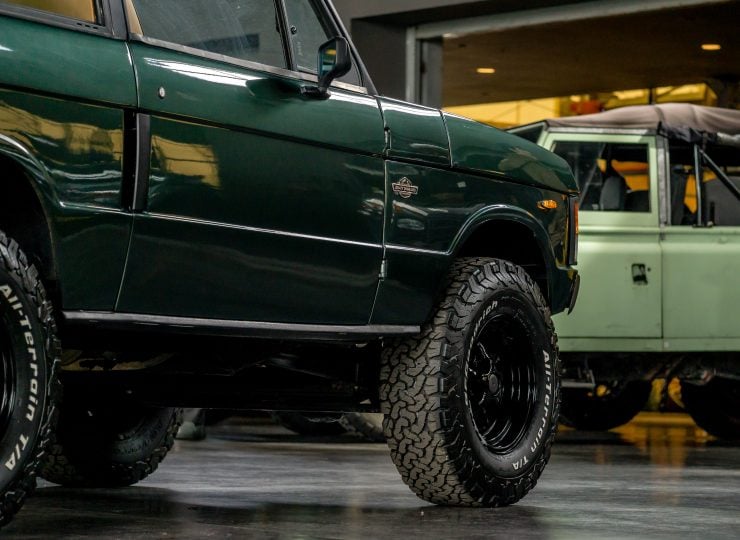 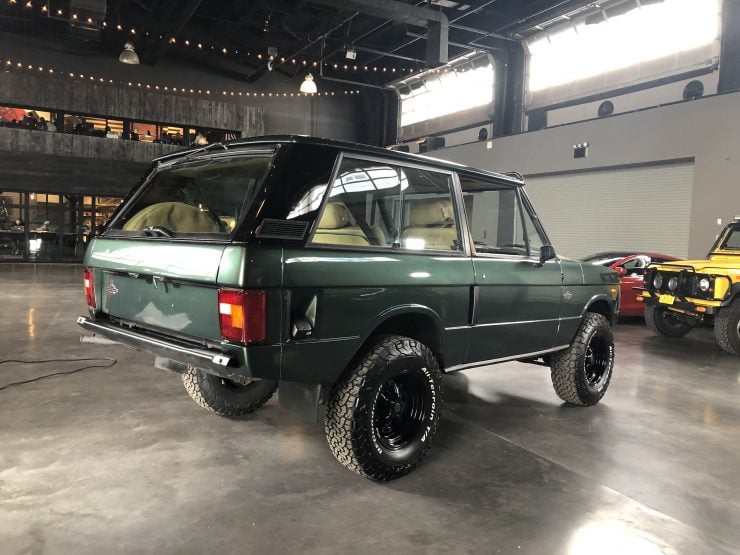 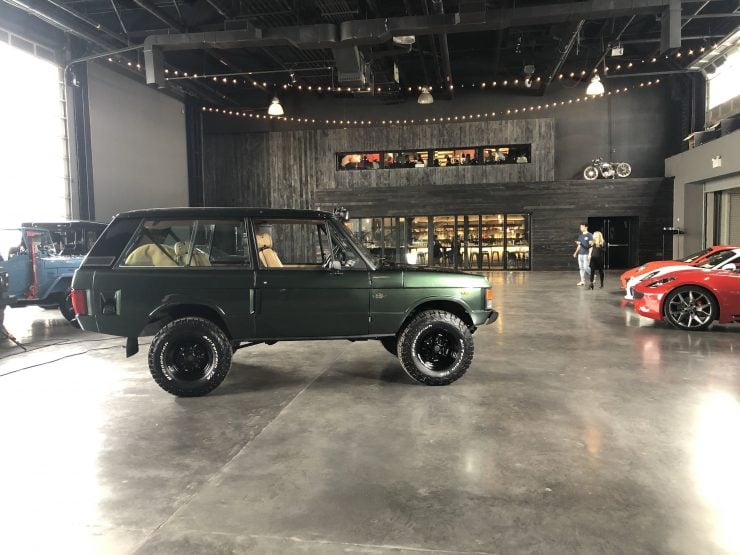 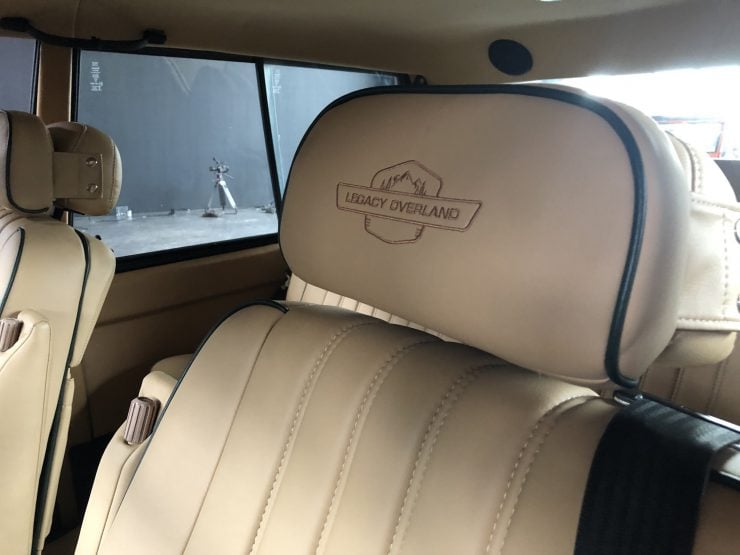 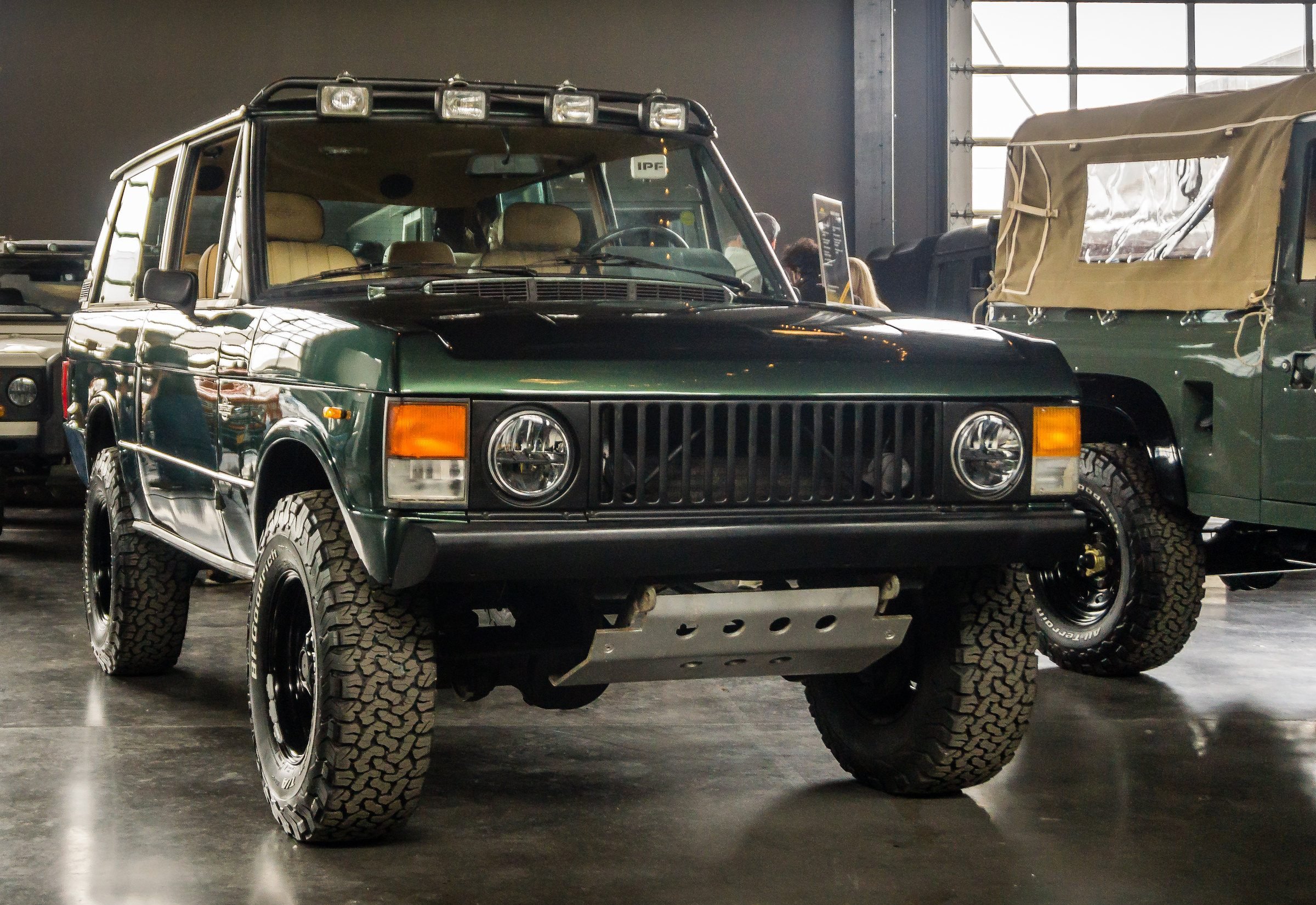