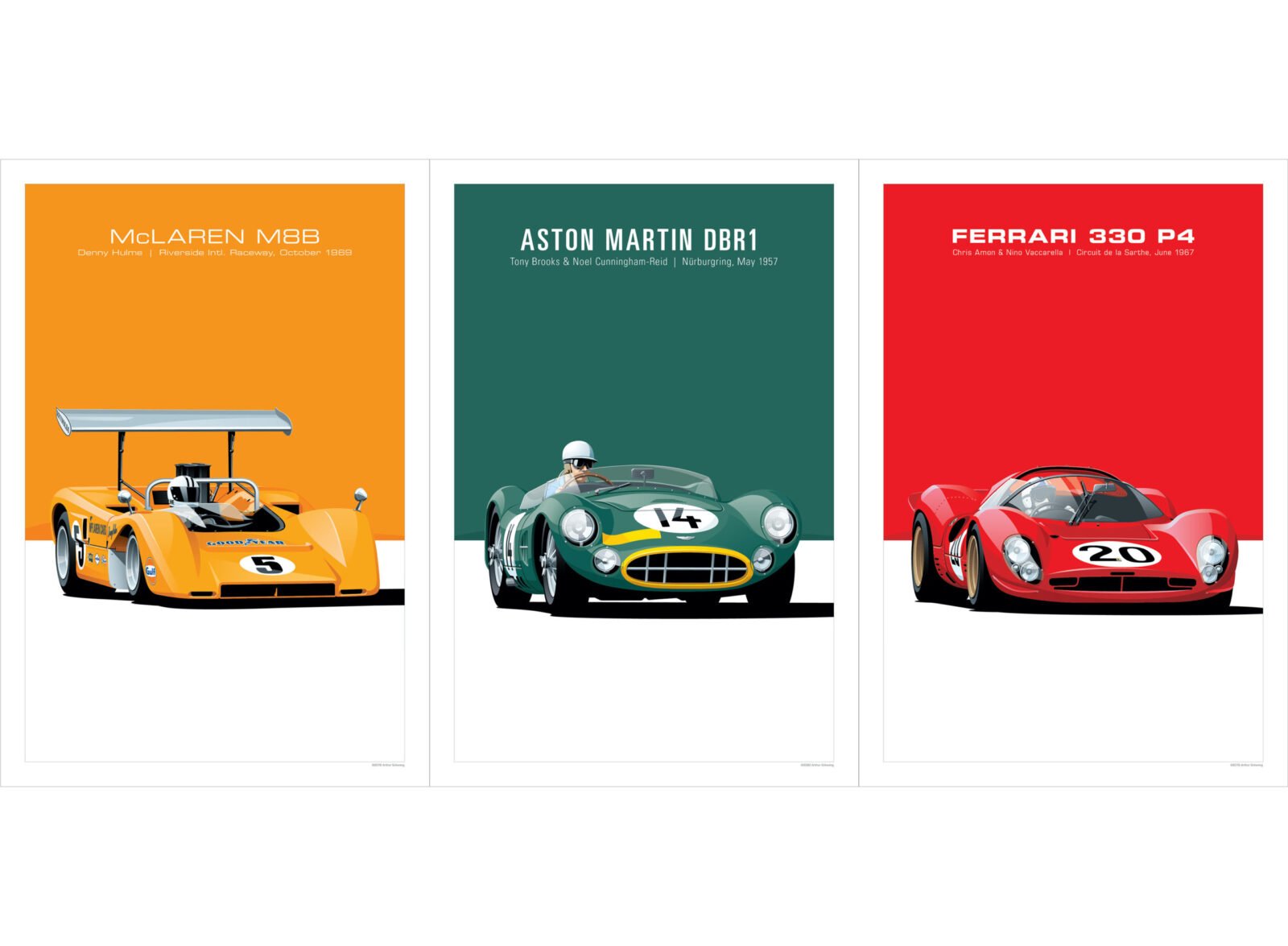 This series of posters is the work of Arthur Schening, the founder of Schening Creative and a graphic designer and creative director with over 20 years of experience.

Much like many of us, Arthur has a lifelong passion for vintage racing cars and so he founded Schening Creative to release collections of poster prints. We’ve featured his latest collection here, each print has a caption underneath to tell you a little more about it, and if you’d like to buy one (or more) you can hit the red button below. 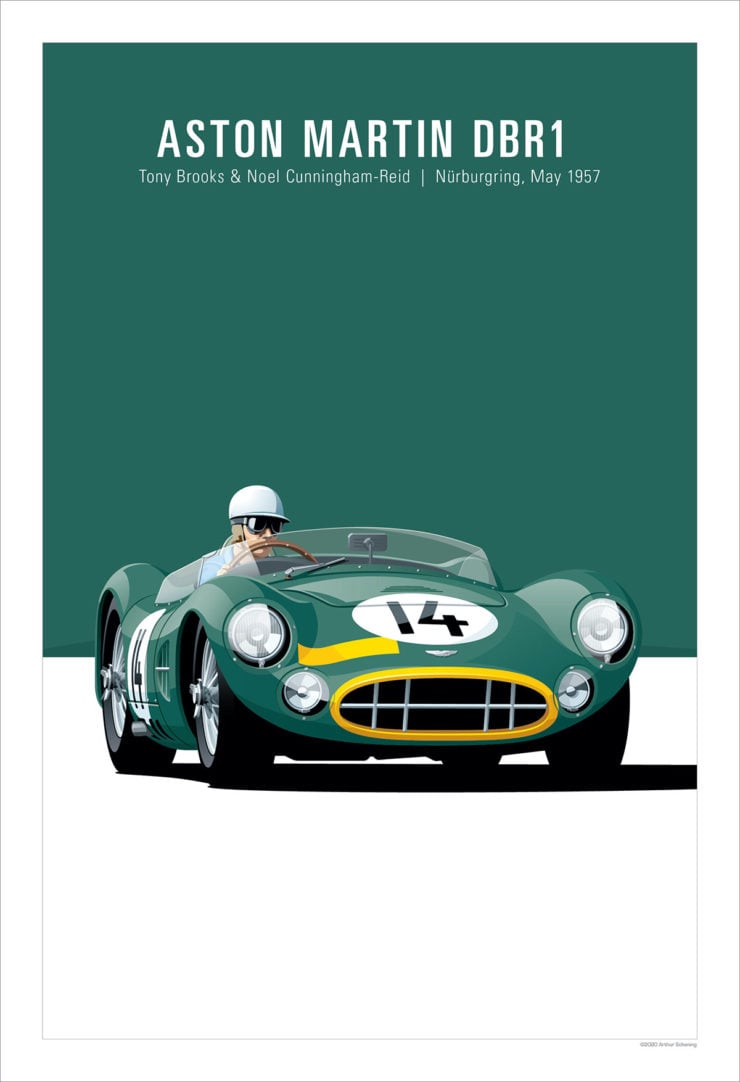 This is the Aston Martin DBR1 driven by Tony Brooks and Noel Cunningham-Reid at the 1957 Nürburgring 1000 Kilometers. The 3 litre Aston Martin won the race over a field of more powerful Maseratis, Ferraris, and Jaguars – driven by many of the greatest drivers of the era like Juan Manuel Fangio, Stirling Moss, Mike Hawthorn, and many others. 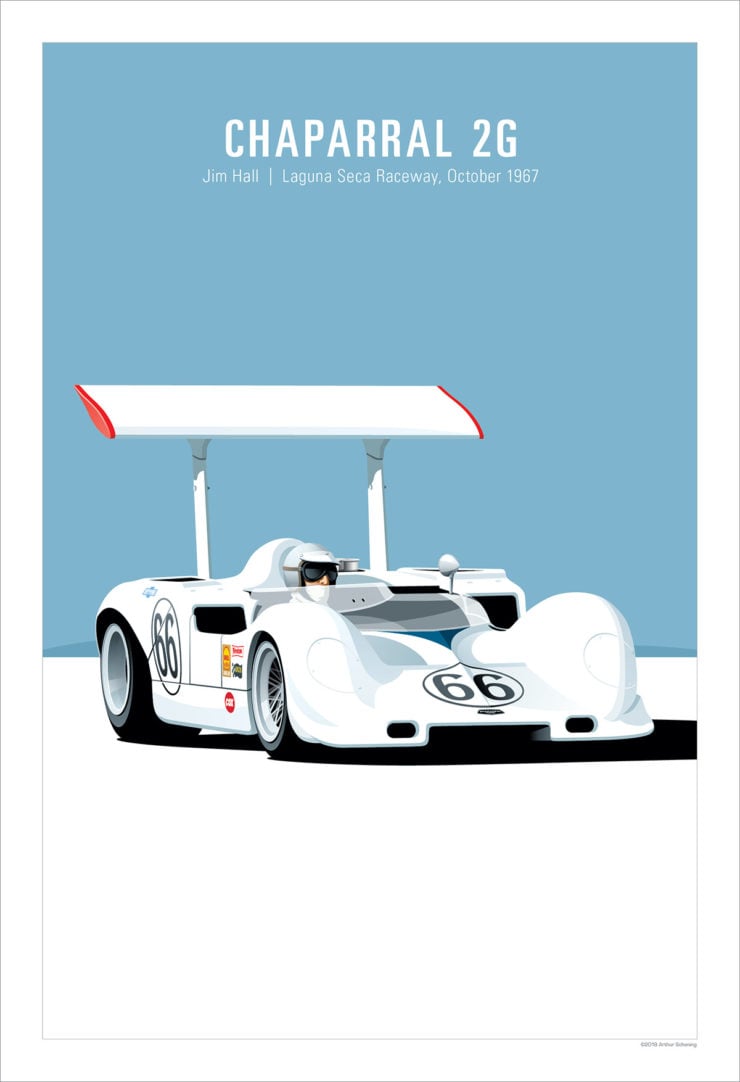 This is Jim Hall driving the Chevrolet powered Chaparral 2G at the 1967 Monterey Grand Prix at Laguna Seca Raceway (Hall finished in 2nd Place behind Bruce McLaren driving the M6A). Along with being a skillful driver, Jim Hall was an engineer and a leader in the innovation and design of spoilers, wings, and ground effects in racing cars. 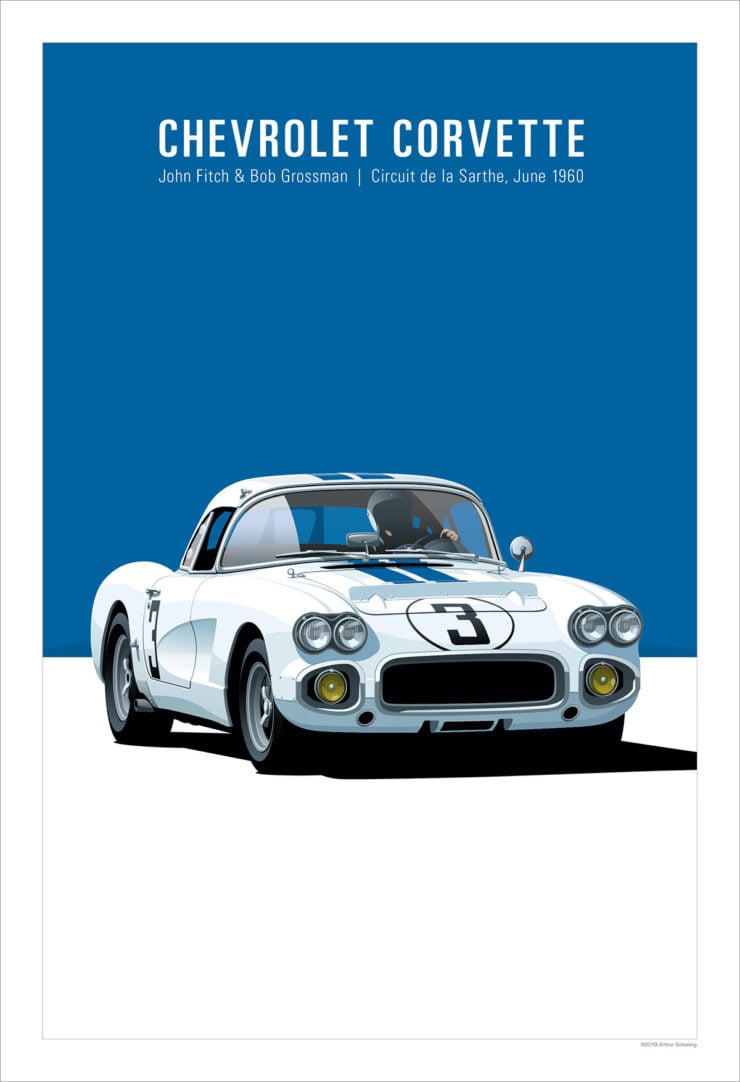 In 1960 Briggs Cunningham brought three Chevrolet Corvettes (C1) to the 1960 24 Hours of Le Mans – the debut race for Corvette at Le Mans. Two of the Corvettes failed to finish the race, the remaining number 3 Corvette, driven by John Fitch and Bob Grossman, won the 5.0 litre GT class and came in 8th place overall. The Camoradi USA team entered a fourth Corvette that also finished the race, but was not classified (it failed to complete the 80% index of performance distance). 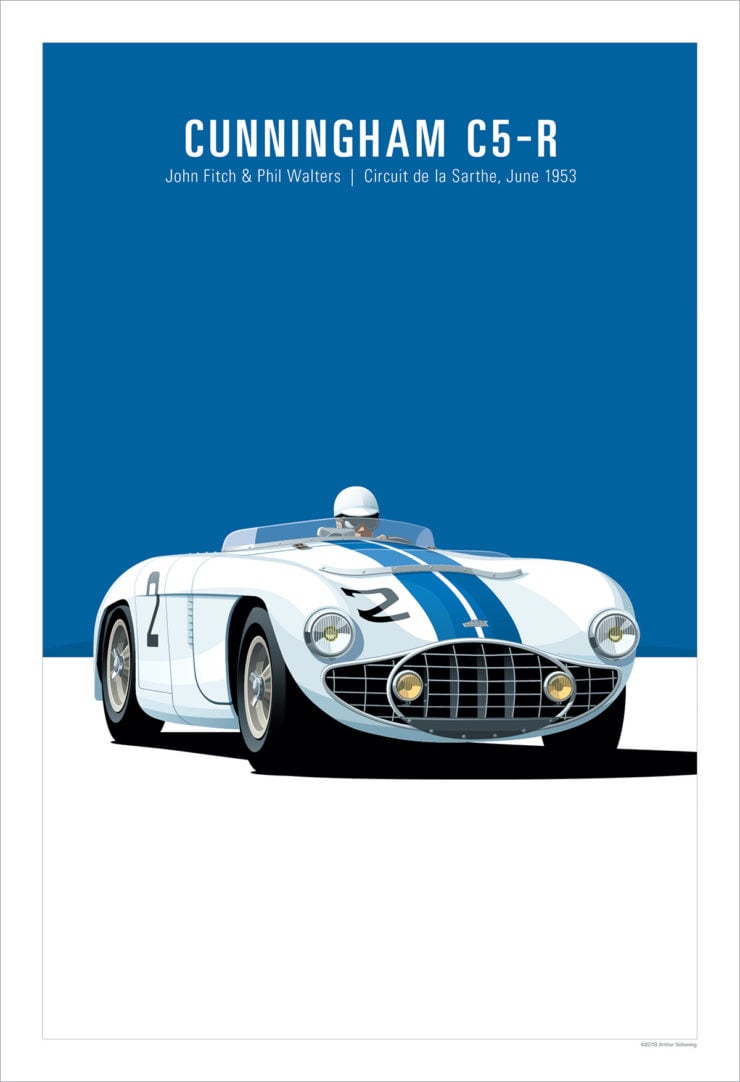 The Cunningham C5-R was driven by John Fitch and Phil Walters at the 1953 24 Hours of Le Mans. The C5-R won its class, and came in 3rd place overall behind a couple of C-Type Jaguars. In 1953 Briggs Cunningham brought 3 cars to Le Mans, all with 5.5 litre Chrysler V8 engines, and all finished the race in the top 10. 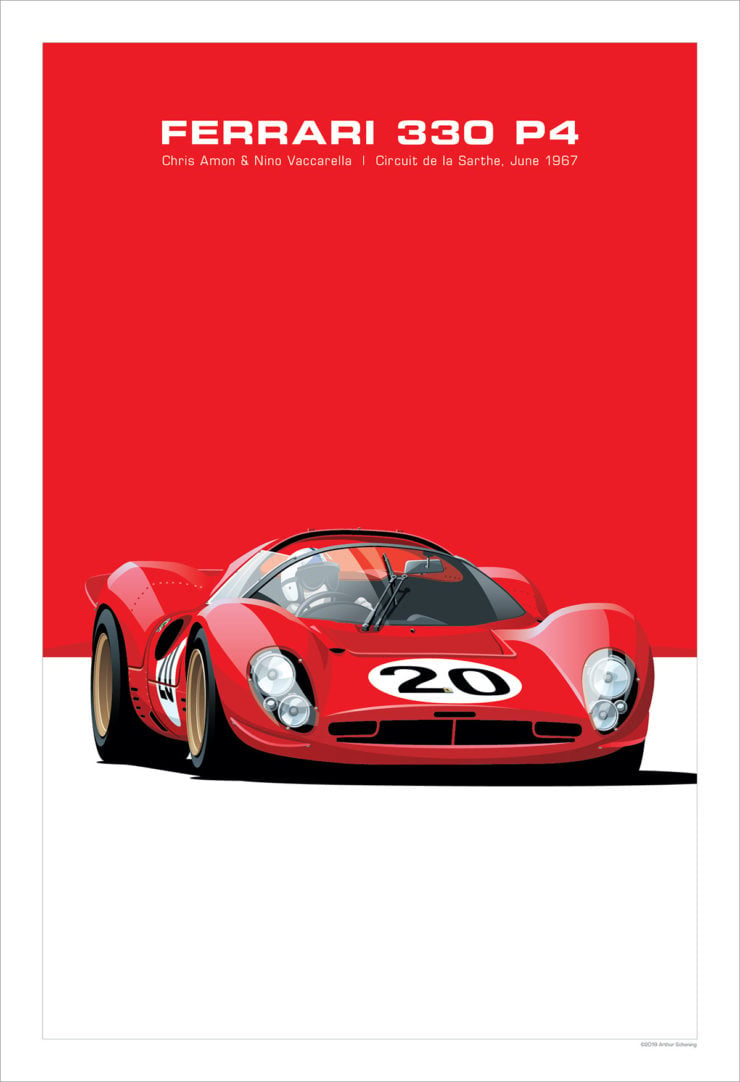 The Ferrari 330 P4 Spyder driven by Chris Amon and Nino Vaccarella at the 1967 24 Hours of Le Mans. They were forced to retire during the night due to a flat tire. Amon tried, but was unable to fix the tire on the track. He attempted to drive back to the pits, which damaged a fuel line and started a fire – he escaped the car uninjured.

Earlier in the season, Chris Amon and co-driver Lorenzo Bandini, won the 24 hours of Daytona, and the 1000 km at Monza with the 330. After Bandini’s tragic death at the Monaco Grand Prix a month earlier, Amon was paired with Nino Vaccarella for Le Mans. 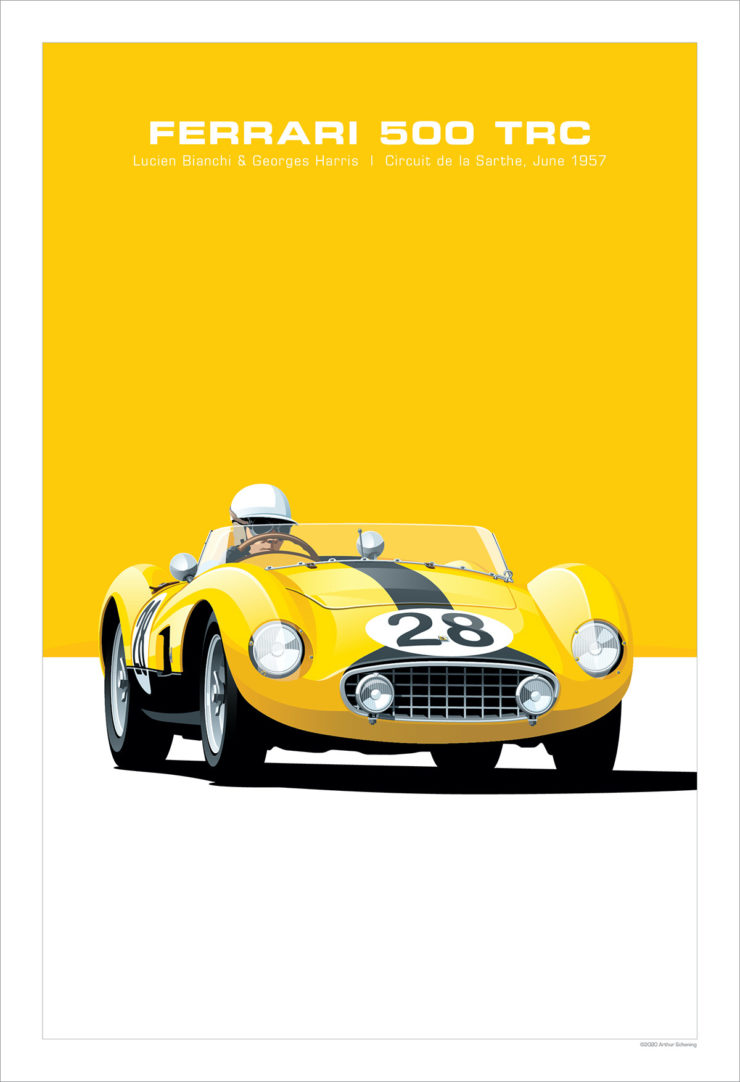 The Ferrari 500 TRC driven by Lucien Bianchi and Georges Harris at the 1957 24 Hours of Le Mans. The Equipe Nationale Belge entered Ferrari won the 2 litre class, and finished in 7th place overall. The Belgian team entered an eclectic team of cars in the race, including a Jaguar D-Type (which finished in 4th place), two Ferraris, and a Porsche 550. 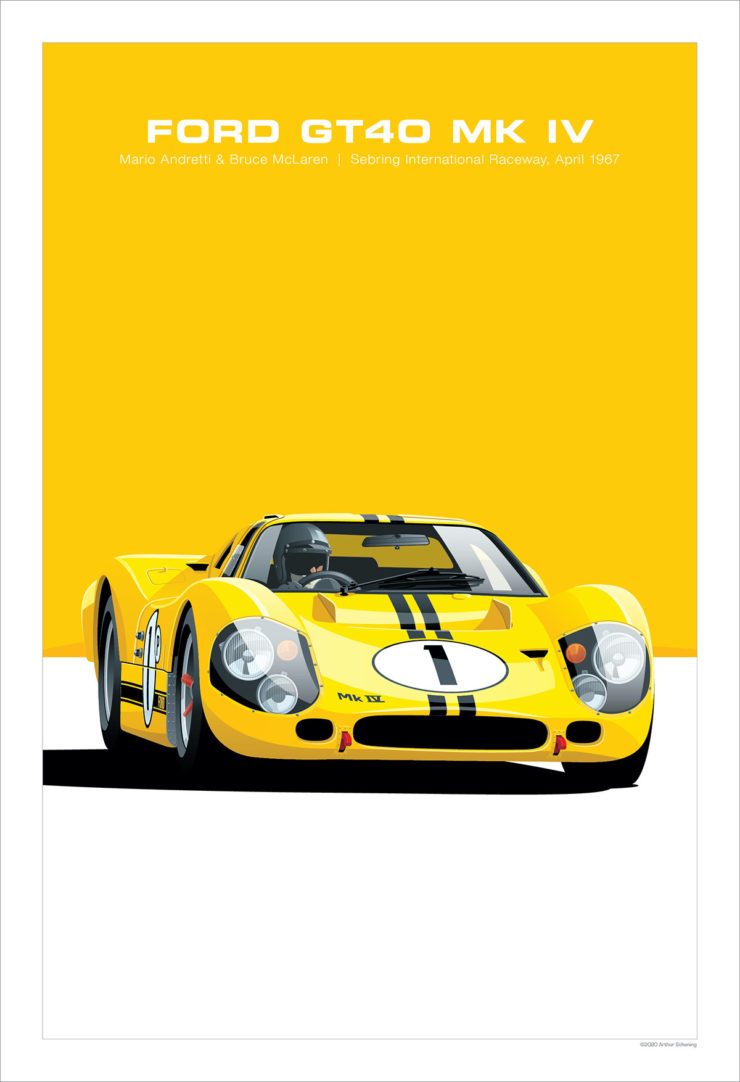 The Ford GT40 Mk IV driven by Mario Andretti and Bruce McLaren at the 1967 12 Hours of Sebring – the debut race for the completely new Mark IV. The number 1 Ford easily won the race, it would finish with a record 12-lap margin over the second place car (a Ford GT40 Mk II). Ford would go onto win Le Mans later in the season with the Mk IV. 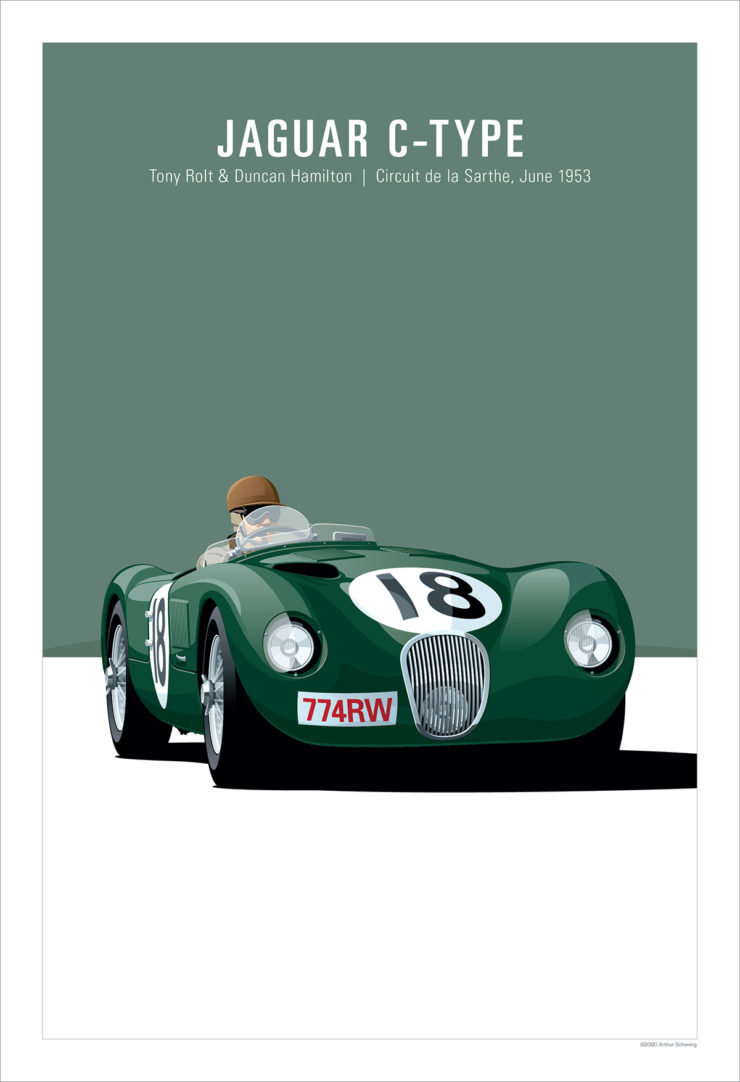 The Jaguar C-Type was driven by Tony Rolt and Duncan Hamilton at the 1953 24 Hours of Le Mans. The Jaguar factory team car easily won the race – leading from the third hour and setting a number of records – while the other two team cars finished second and fourth.

Rolt and Hamilton’s race had a number of incredible stories attached to it; their car was disqualified the day before the race, which lead to the pair drinking that whole night to console themselves. The disqualification was reversed prior to the start and the pair entered the race a bit worse for wear. And, during the race, the C-Type’s windscreen was smashed, and Hamilton’s nose broken by a bird-strike while running at top speed on the Mulsanne straight. 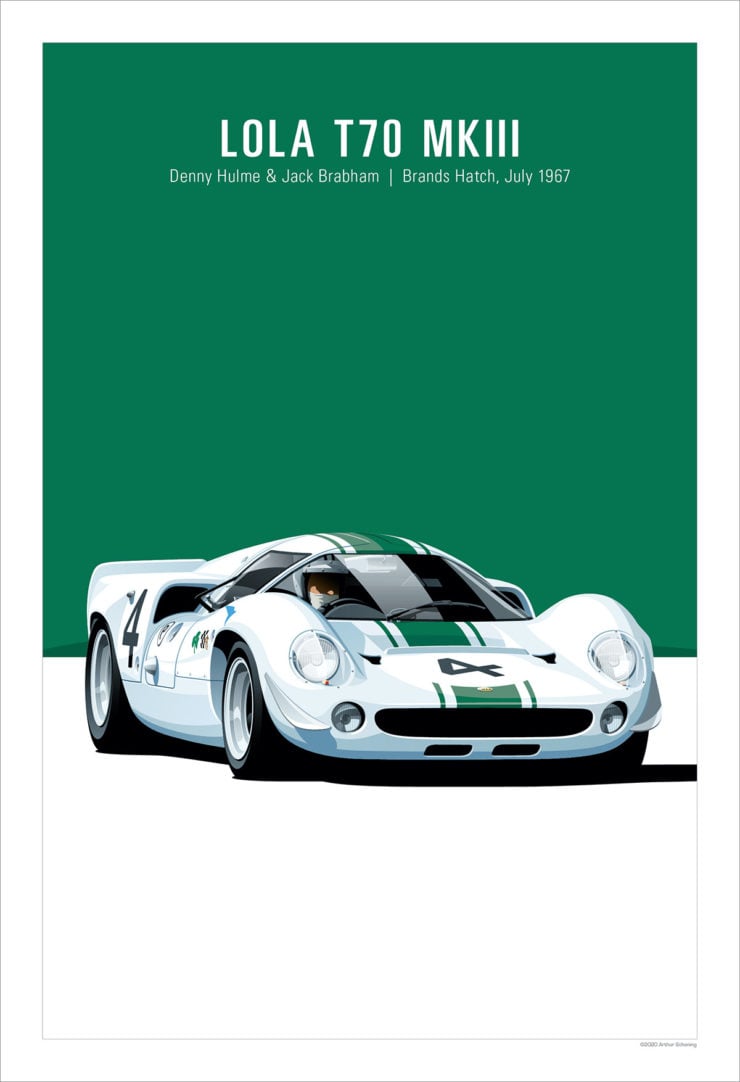 The Sid Taylor Racing Lola T70 MkIII driven by Denny Hulme and Jack Brabham at the 1967 BOAC International 500 (at Brands Hatch). While the world-class driver lineup qualified on pole, they were unable to finish the race due to mechanical issues. 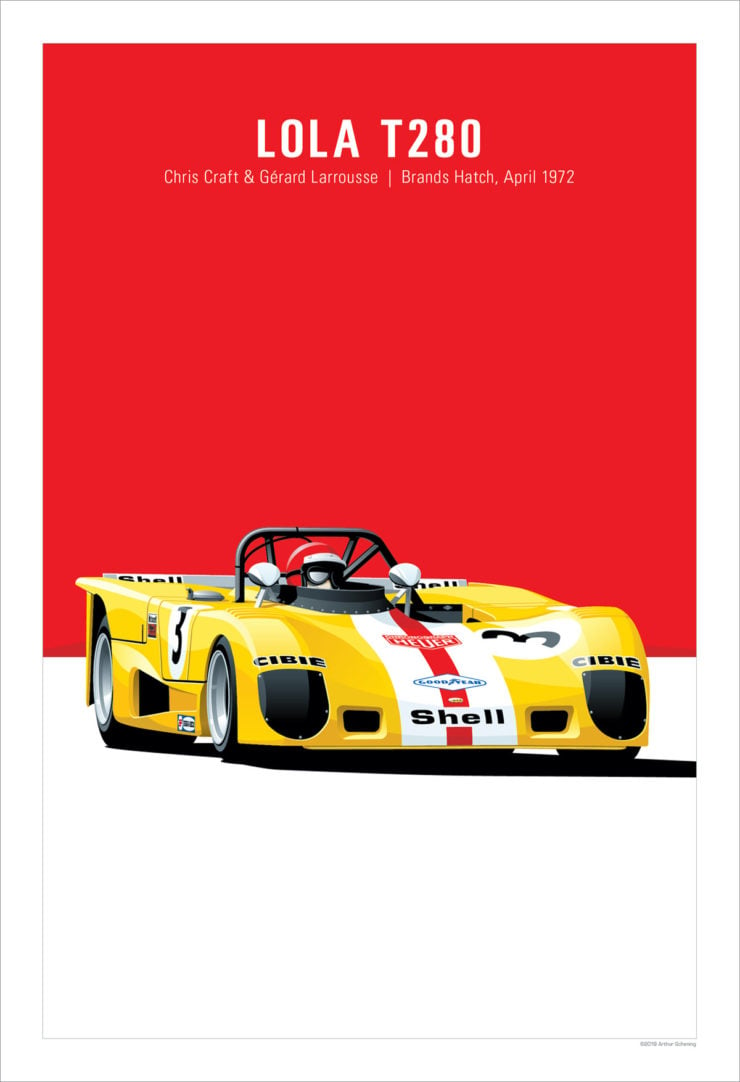 The Ecurie Bonnier Lola-Cosworth T280 driven by Chris Craft and Gérard Larrousse at the 1972 BOAC 1000 km. Jo Bonnier’s team entered the race with a pair of Lola’s – both failed to finish the race due to mechanical issues. Sadly, Bonnier would lose his life at the wheel of one of his team cars at the 24 Hours of Le Mans later that year. 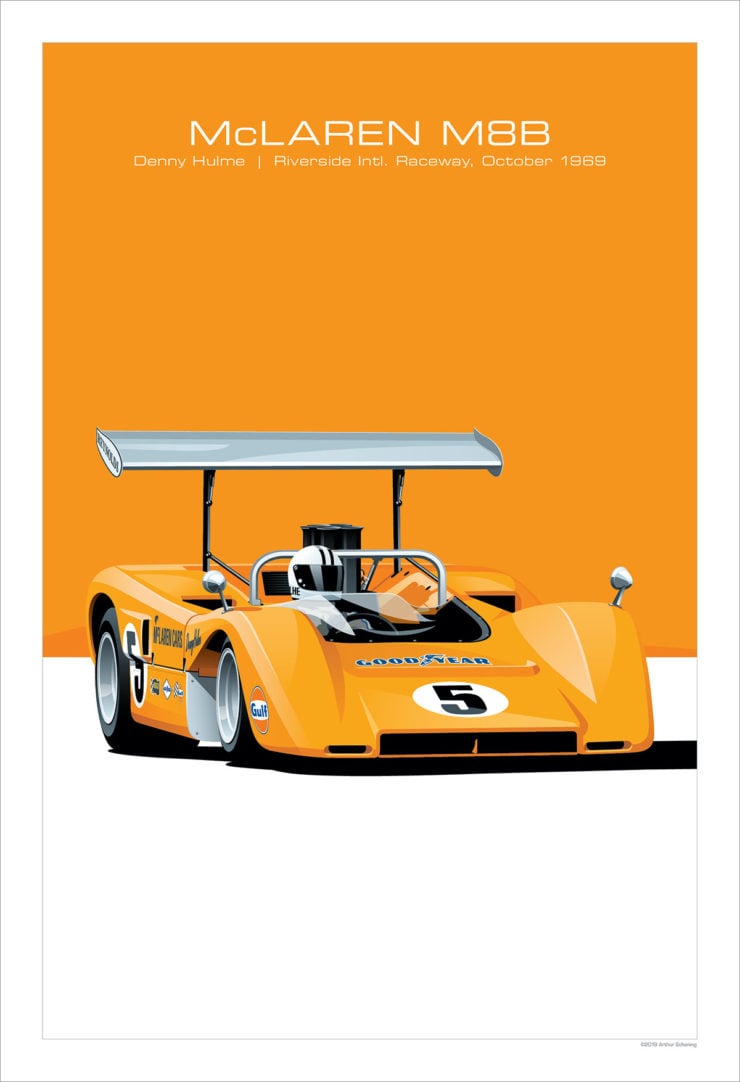 1968 Can-Am Champion Denny Hulme driving the McLaren M8B at the 1969 Los Angeles Times Grand Prix. Hulme would win the race, and go on to win a total of 5 races during the season. His teammate, Bruce McLaren, would win 6 races and the 1969 Can-Am Championship. 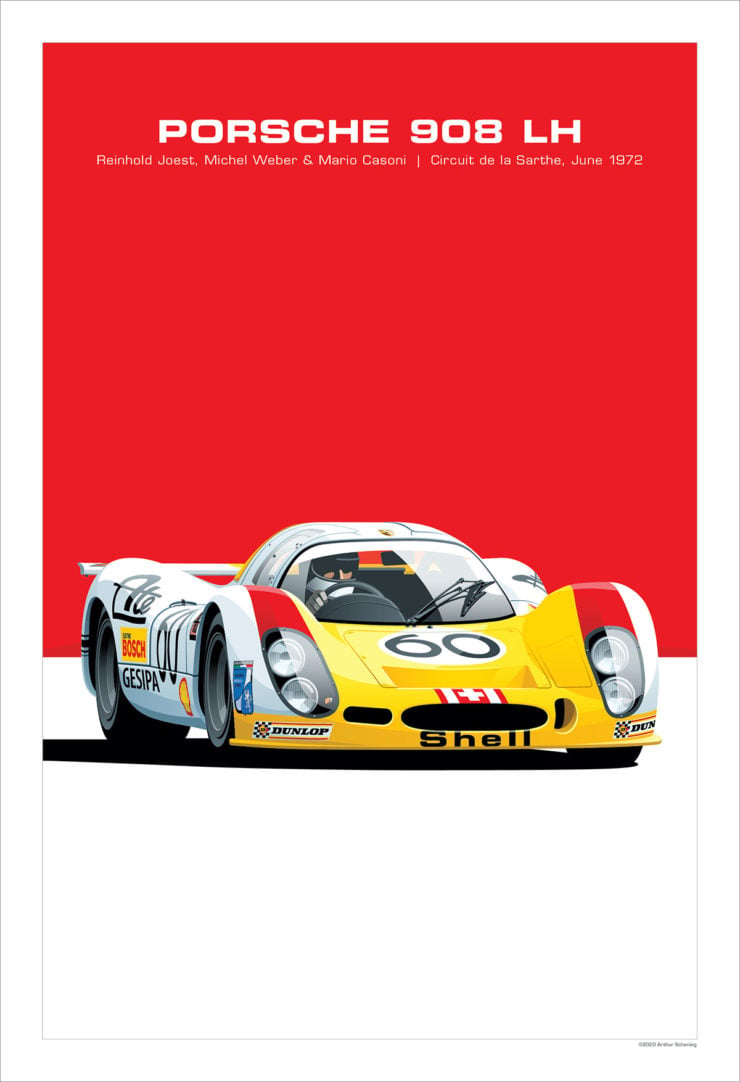 The Siffert ATE Racing Porsche 908 LH driven by Reinhold Joest, Michel Weber, and Mario Casoni at the 1972 24 Hours of Le Mans. The three-year old 908 was previously owned by Jo Siffert who had been killed at Brands Hatch less than a year earlier. The car was given a new 3-litre engine by Porsche – who were not running a factory team in 1972 – and surprising most, finished 3rd overall behind a pair of Matra MS670s. 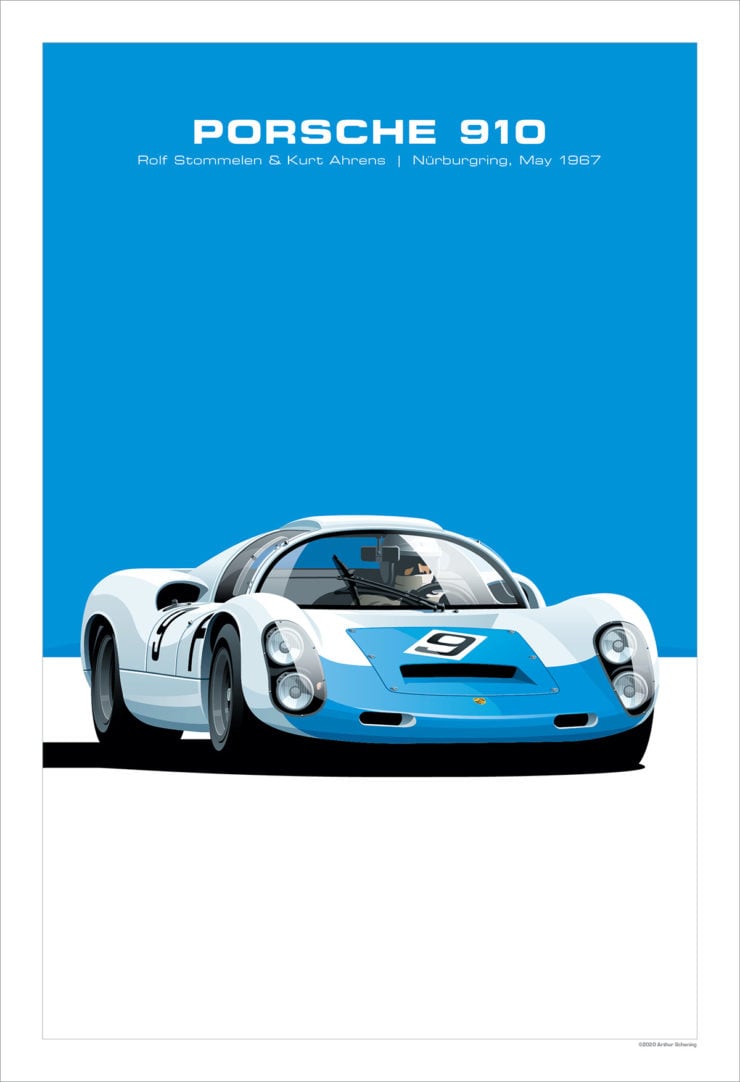 In 1967 the Porsche factory team brought six Porsche 910 Prototypes to the Nürburgring 1000 Km – they were determined to win. Three of their cars used 6-cylinder 2 litre engines, and three had new 8-cylinder, twin camshaft 2.2 litre engines.

The number 9 Porsche, driven by Rolf Stommelen and Kurt Ahrens, was one of the 8-cylinder cars. At the end of the race Porsche took the first 4 places – first, second, and third, went to the 6-cylinder cars. The remaining two Porsche 910s, the number 8 and 9 cars, failed to finish due to mechanical issues. 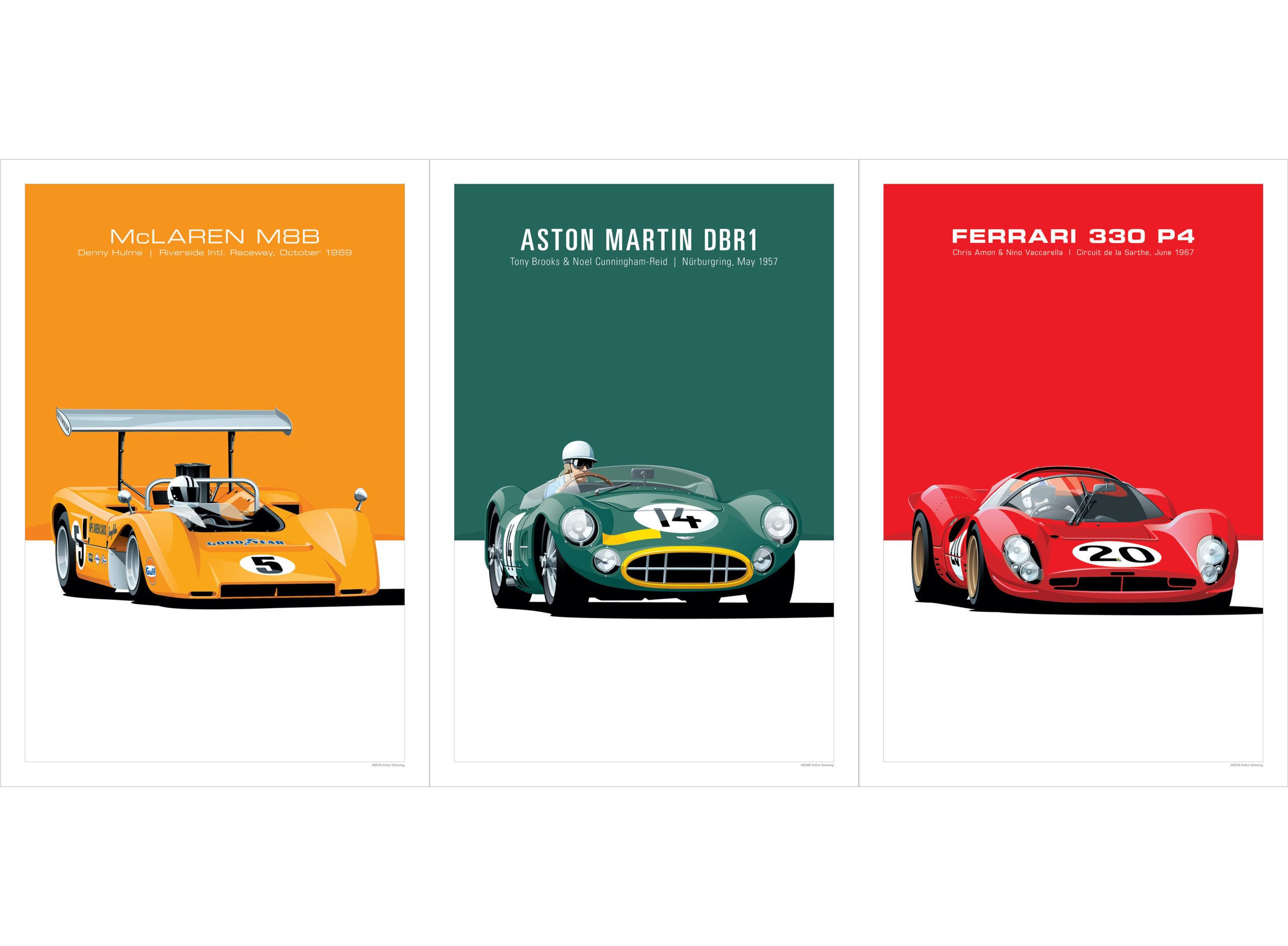 Facebook Twitter WhatsApp Email This unusual looking car is actually a Citröen 2CV under the skin, a vehicle that we don’t typically associate with…

Facebook Twitter WhatsApp Email The AC Frua was built on the same chassis as the mighty AC Cobra 427 Mark III, though it was…

Facebook Twitter WhatsApp Email Believe it or not, the Brütsch Rollera microcar was the large choice in its model family, it was based on the…

Facebook Twitter WhatsApp Email Although we most often associate James Bond with the Aston Martin DB5, in the 1961 Ian Fleming novel Thunderball his automobile…

Facebook Twitter WhatsApp Email This is an Intermeccanica Indra, it’s a rare Italian-built sports car from the early 1970s that makes use of an…