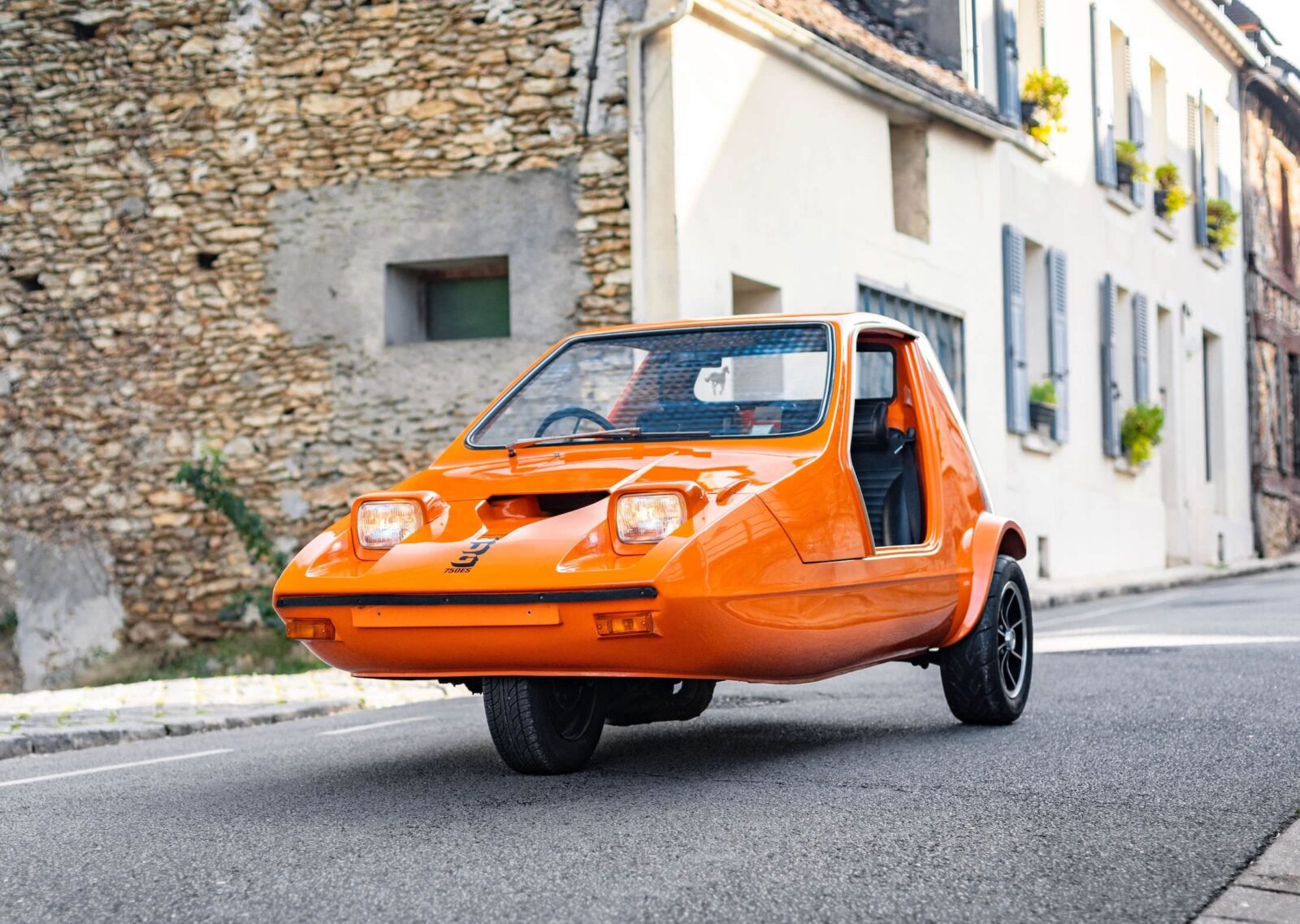 The Bond Bug isn’t the sort of car you’d typically associate with speed. It only has three wheels after all, and its somewhat relaxed four cylinder engine was capable of just 29 bhp on a good day.

The original designers of the Bond Bug never intended it to be fitted with an engine capable of 150 bhp, in fact if they learned of this existence of the Bug you see here they’d almost certainly need a lie down in a darkened room.

It’s not known exactly why, but the previous owner of this Bug decided to reengineer the drivetrain to include the 150+ bhp engine from a Yamaha YZF-R1 superbike with its original six-speed sequential transmission. 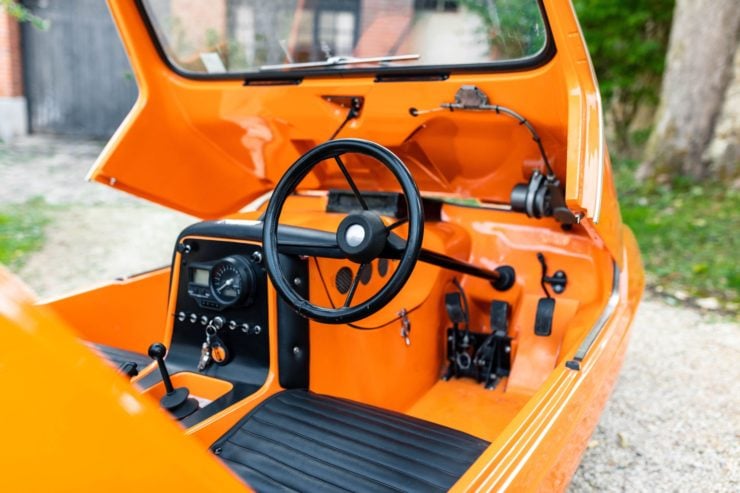 Power is sent to the live axle rear end, and the auction listing reassures as that the “gears have obviously been modified to support the power”, however I’d still be rather reticent to give it too much right foot for obvious reasons. The car is still running its original drum brakes however it does now benefit from a significant suspension upgrade with a set of coilovers fitted.

The engine bay is inside the cabin between the footwells of the driver and passenger under a small fibreglass lid. A modified exhaust system was fitted and the car has twin mufflers mounted at the rear on the vehicle’s centreline, and it’s riding on alloy wheels with a set of Yokohama Advan A048 semi-slick racing tires.

The work that went into the conversion is impressive, if you didn’t know better you might even think it was the stock engine – even the heating system works. 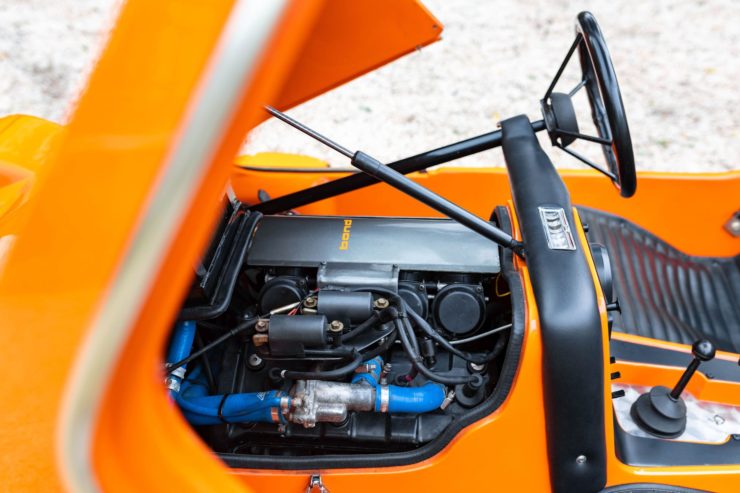 The original Bond Bug was an unusual vehicle, it was produced after British carmaker Reliant bought Bond Cars Ltd. in 1969.

Tom Karen of Ogle Design was commissioned to design a new vehicle based somewhat on the Reliant Rogue prototype design and using a newly designed chassis, with a mixture of parts from the Reliant Robin 750 (of Mr Bean and Jeremy Clarkson fame) and the Reliant Regal.

The Bond Bug was introduced in 1970, it was intended to attract sales from young people who were looking for an inexpensive sporty car with unusual looks. The late 1960s and 1970s were a time when wedge-shaped cars were seen as the way of the future, and it’s highly likely that these influences were incorporated into the design.

Unlike the better known Morgan three-wheeler, the three-wheeled cars from Reliant had a single wheel at the front and twin wheels at the back. This could make cornering somewhat challenging as the car had a propensity to tip over, experienced owners would often place a bag of cement on the passenger seat to give better left/right weight distribution.

Originally the Bug was powered by the Reliant four-cylinder alloy engine with 29 bhp from a 700cc displacement, however the release of the 700ES with its newly designed cylinder head and higher compression ratio which increased power to 31 bhp. 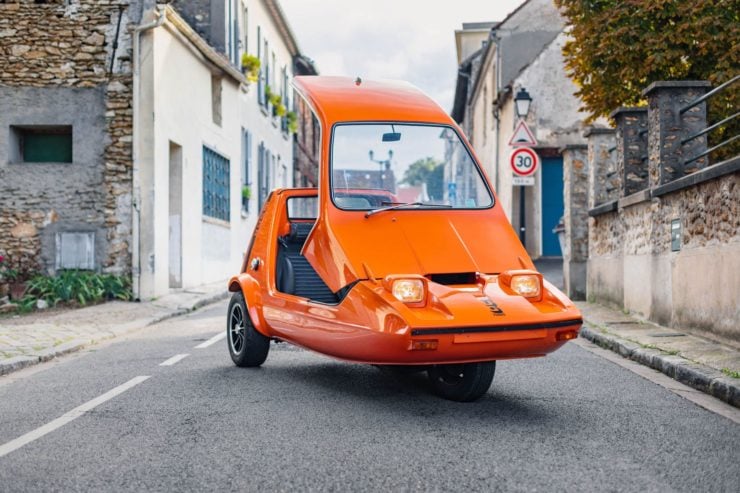 The Bug uses a body-on-frame design with a steel chassis and a fibreglass body, the entire roof section tilts forwards to allow entry and exit, and it has seating for two. Over the course of the 1970 to 1974 production run slightly fewer than 2,300 Bond Bugs were built, and today they’re valued by collectors for their quirky looks and unusual driving characteristics.

The French-registered 150 bhp Bond Bug you see here is coming up for auction with Artcurial, it has an estimated value of between €20,000 to €30,000. If you’d like to see more or register to bid you can click here to visit the listing. 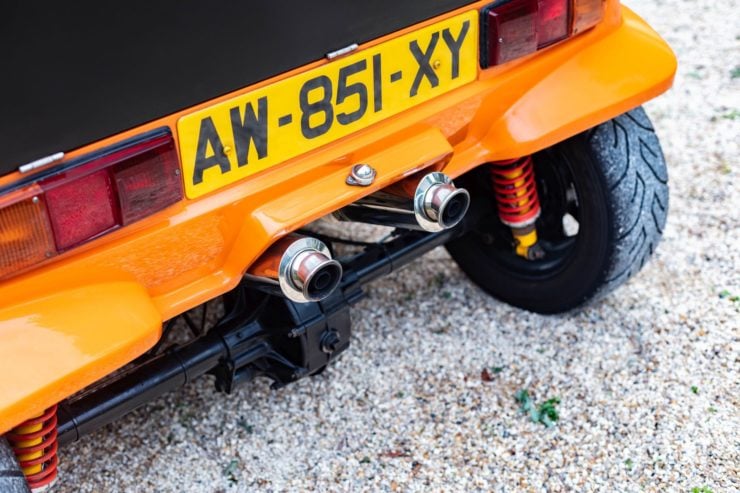 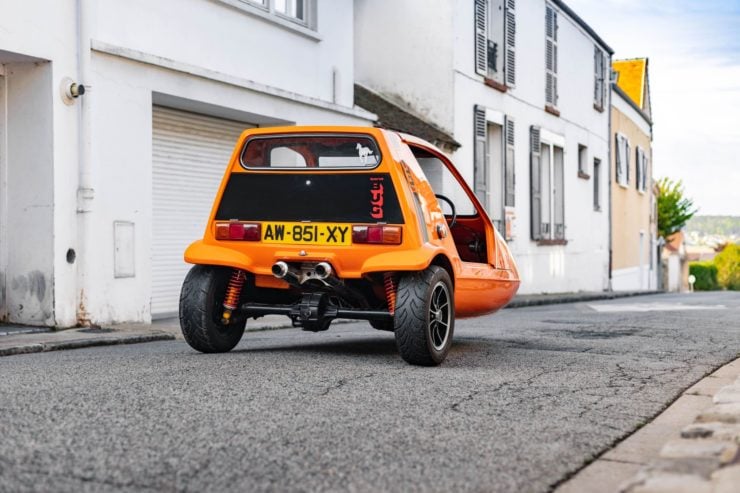 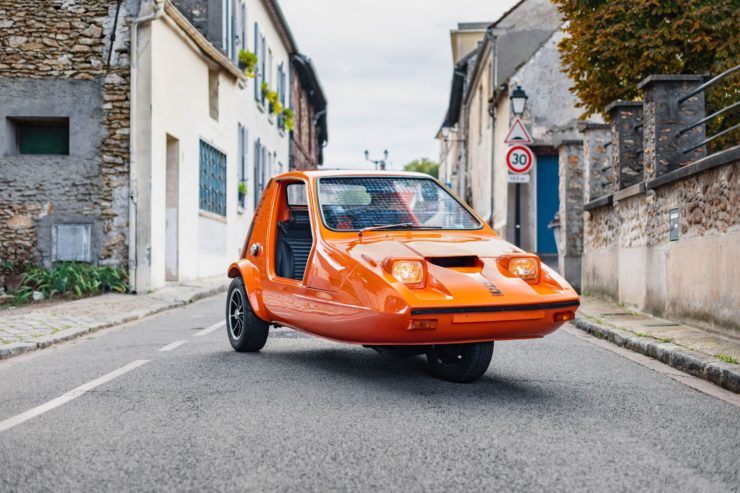 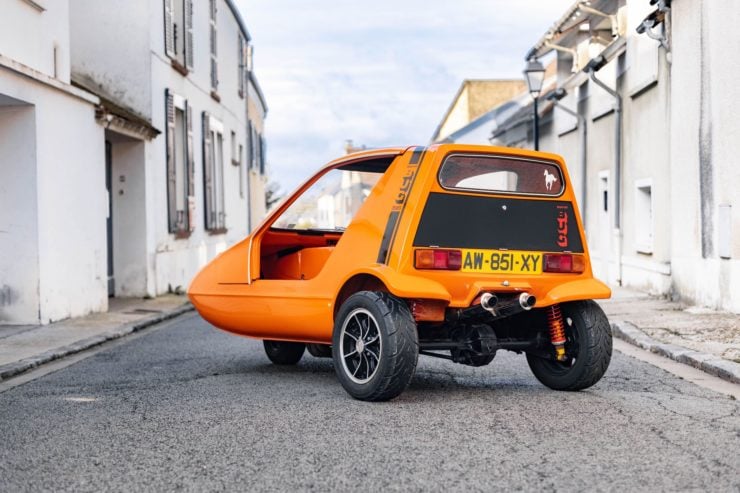 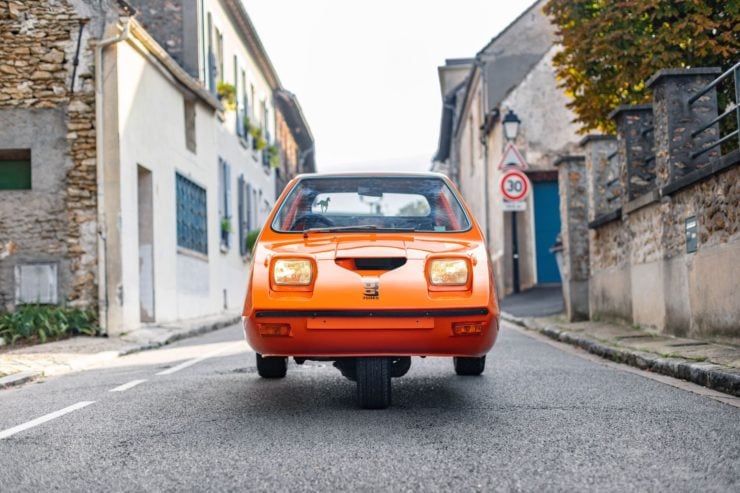 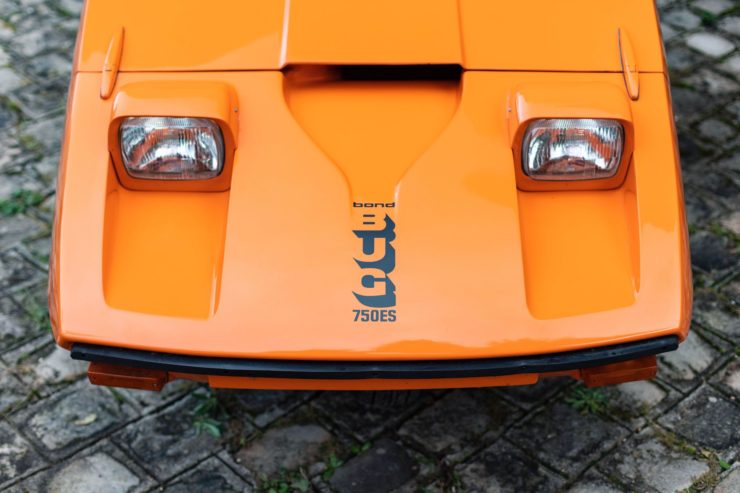 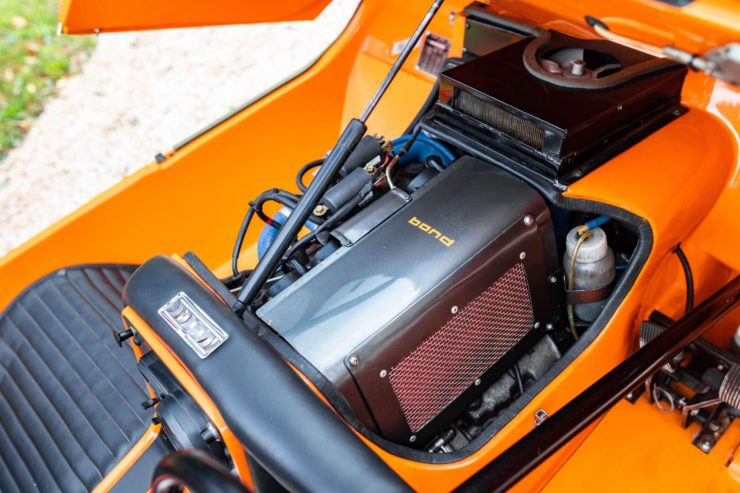 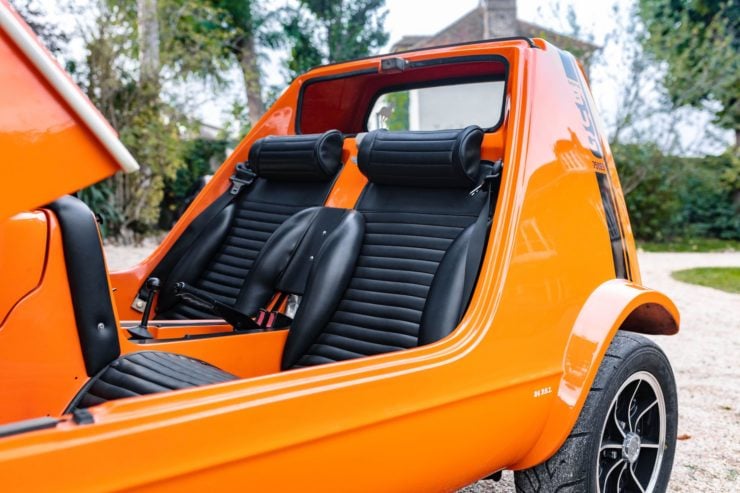 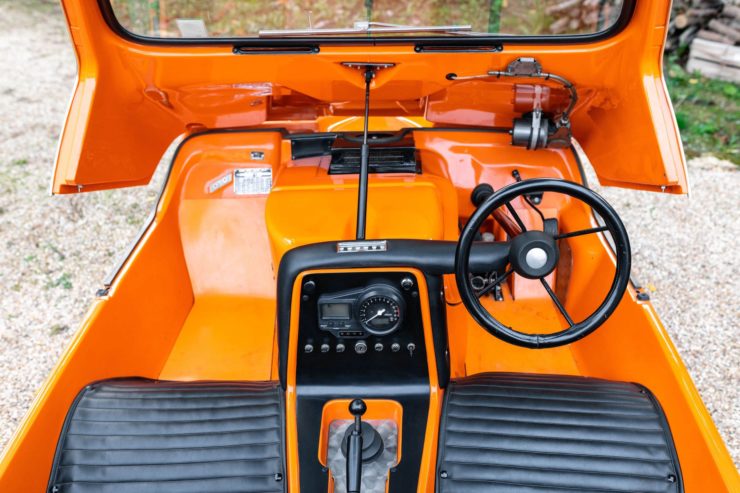 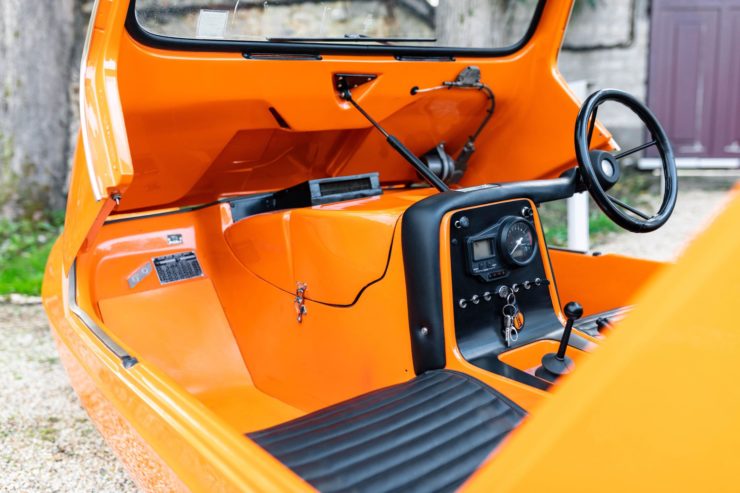 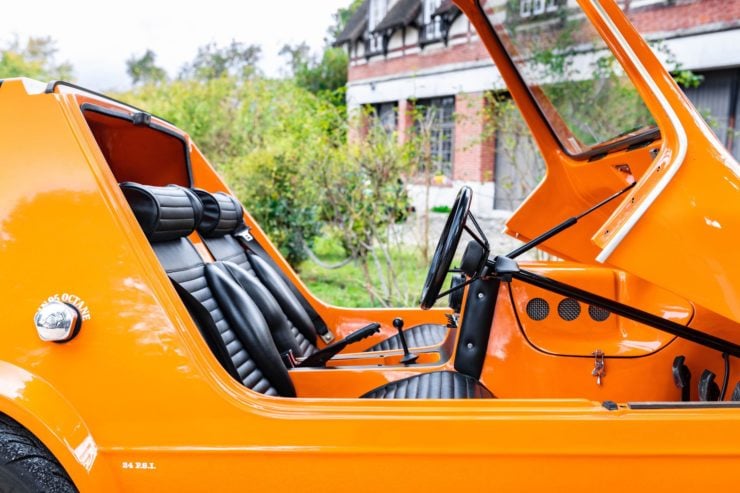 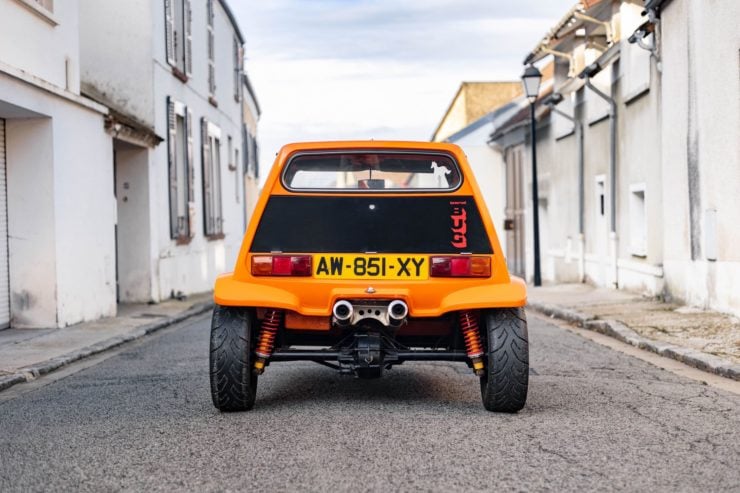