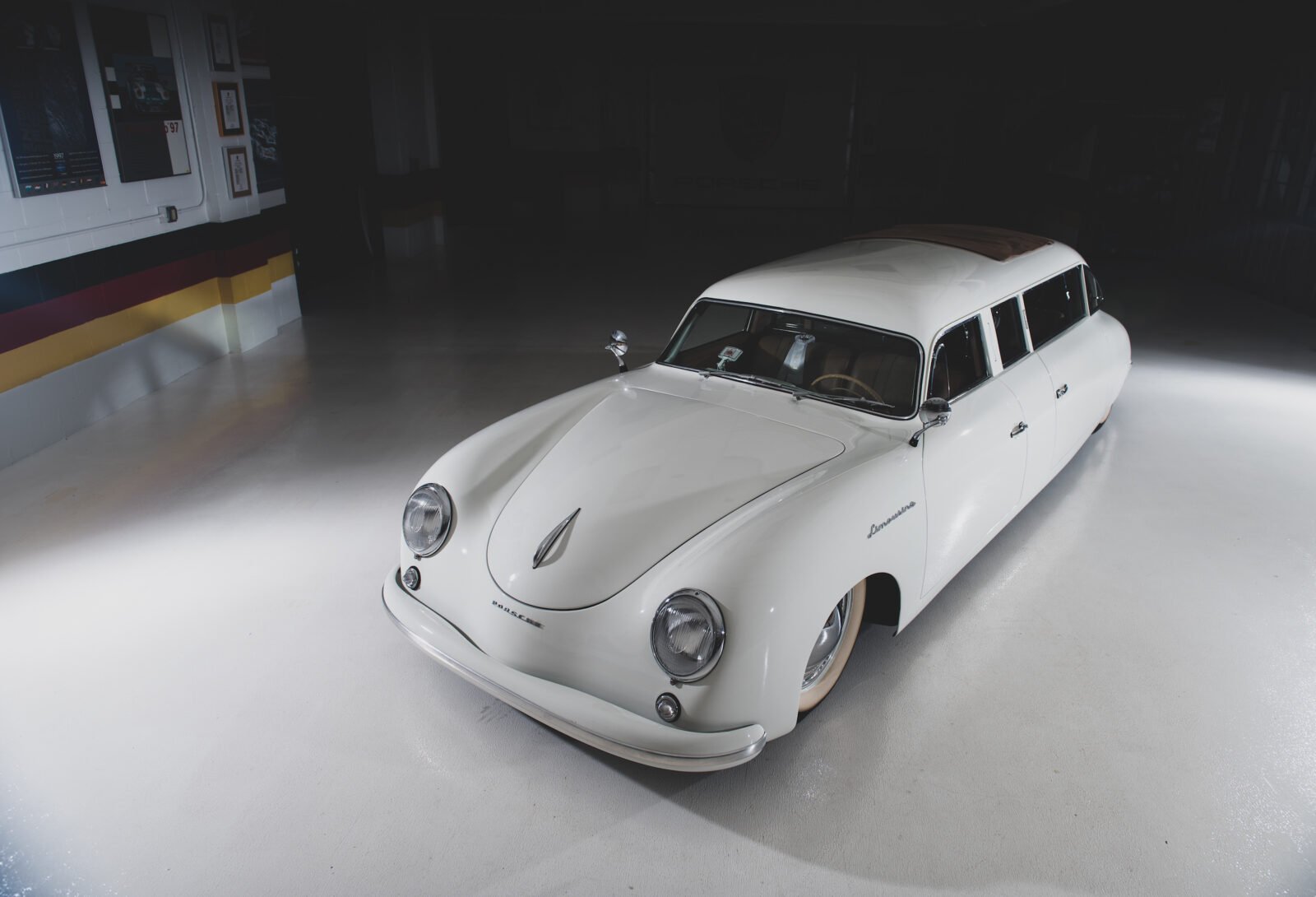 Editor Update 29/06/2019: We’ve getting additional information in about this vehicle, it was built by Don Boeke of Egyptian Custom Body in Dayton, Ohio to a design penned by Byron Kauffman.

It was built for Porsche collector John Dixon for his daughter’s wedding, and he used a basket-case pre-A Porsche 356 that with floors too far gone to save without significant use of new body panels.

The cutting, extending, and body finishing was all done in-house, and the interior work was largely outsourced to specialists. The original 356 engine was replaced with a rebuilt Porsche 912 engine offering a little more power while keeping it all in the Porsche family.

The following was written by Byron Kauffman in an email to us about this car.

I am a motorsports artist and like building cars/motorcycles when time permits. I met Marvin when he came to Daytona to oversee buying a Porsche from me for his client. I kept in touch regarding progress on that car and ran into him and John Dixon at Porsche swap meets.

Marvin and John asked me to design the limo to help visualise the build. John wanted to do something special for his daughter’s wedding. The car was built using a basket case pre-A Porsche 356 he had at the shop. The project was a good way to showcase the shop and poke fun at his “purist” friends.

The car was done in time for the wedding and there are pics somewhere of it in action.

Not sure how long the build took but more info might be on the TajMaGarage site. The car has a vintage “Car Bar” system that pumps stored liquor through tubes to the passenger area. The car was in “Excellence” magazine back when it was first done.

This 1953 Porsche 356 limousine custom has had motoring journalists and Porsche enthusiasts scratching their heads this week. The car is presently a popular member of the Taj Ma Garaj Collection however information on it and its provenance is proving hard to come by.

We don’t know who actually built it, but we do know it was built using an authentic Porsche 356 Pre-A coupe built from 1953. It maintains its original twin beehive tail lamps, the distinctive bent windshield, the period correct front turn signals, and the correct Porsche 365 flat-4, air-cooled engine.

We don’t yet know who actually turned the car into a limousine, there’s a Reutter badge on the front right fender however it’s considered unlikely that Karosserie Reutter, a renowned German coachbuilding company, would have built a one-off limousine using a Porsche 356 as the starting point. 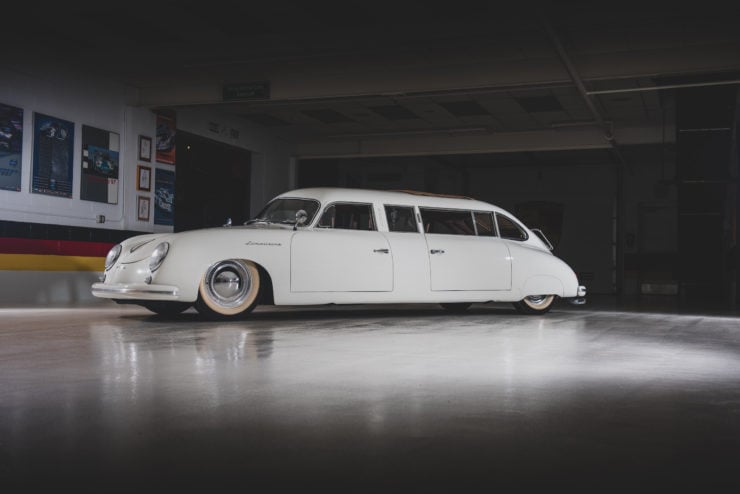 Ruetter were contracted to Porsche to build bodies for the 356 and in 1963 Porsche bought the karosserie and brought them in-house. With this in mind it’s likely that this car was originally built by Reutter, then extensively modified by another company into its current form.

It has to be said that the overall level of work appears to be excellent, many period 356 parts have been kept in place in eluding the full front end, the full rear end, the engine, and the running gear. I am curious to know how they extended the linkage for the transmission and if the gearing has been modified to account for the considerable extra weight the car is now carrying.

A further clue to the car’s history is a Sonauto badge on the engine bay lid, this company was a French distributor of Porsches back when this car was new, so it’s possible it started life in Paris, and it may have been converted to its current form there. 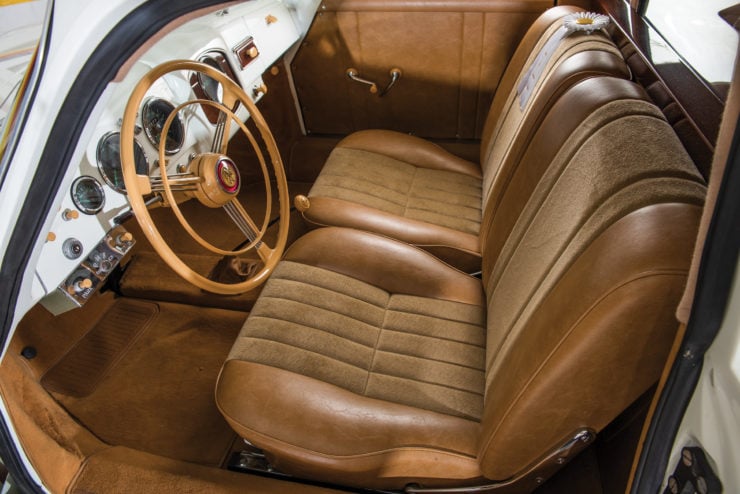 A detailed look over the interior leaves you with the impression that it was converted very carefully to look period correct. The extra-wide rear suicide doors open to display a beautifully appointed interior, with tan upholstery and carpeting, glossy wood panelling, an inside/outside thermometer, period correct ashtrays, upholstered foot rests, a clock, and a Blaupunkt plate that may be covering an AM/FM head unit.

The rear seats fold down to allow access to the rear section that appears to contain two smaller seats suitable for children, though the area is probably best used as a luggage shelf for safety reasons. The sunroof above the rear passenger compartment has a folding fabric sunroof sourced from a VW Beetle, and all four doors have their own winding windows.

Although we don’t have access to the car’s history file we can see that the odometer is displaying just 112 miles, though whether this is original mileage or mileage since a restoration we don’t know. 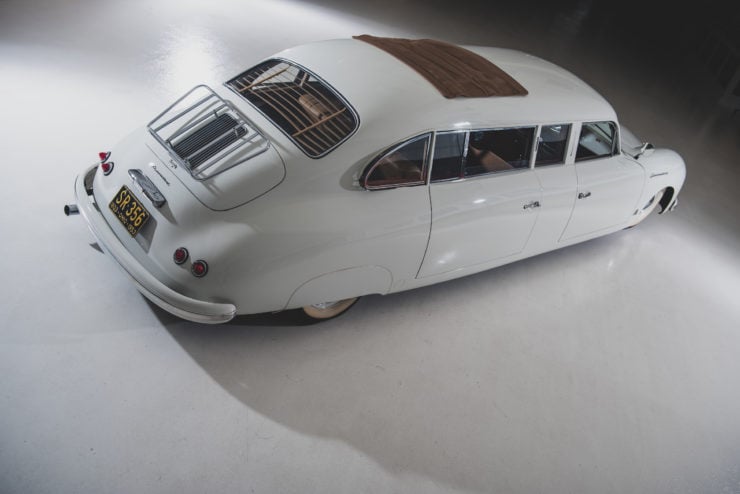 The official PR Newswire statement about this car doesn’t provide a lot of additional information, it says: “1953 Porsche 356 Limousine Custom, a fantastic illustration of John’s sense of humor and representative of some of the quirkier cars in the Collection (Est. $150,000 – $250,000).”

The car is coming up for auction with RM Sotheby’s in late-September with the rest of the Porsches and Volkswagens from Taj Ma Garaj, an automotive-themed banquet facility in Dayton, Ohio with 23,000 square feet of space, able to accommodate 600 guests.

We’ve reached out to the Taj Ma Garaj to try to source further information on this rather unique Porsche, in the meantime if you know anything further about the car please get in touch via out contact page here and let us know.

If you’d like to see more of this car on RM Sotheby’s or register to bid you can click here to view the listing. 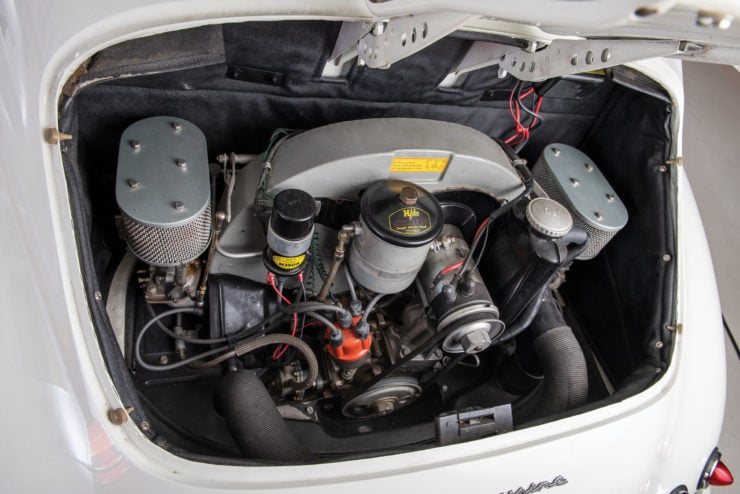 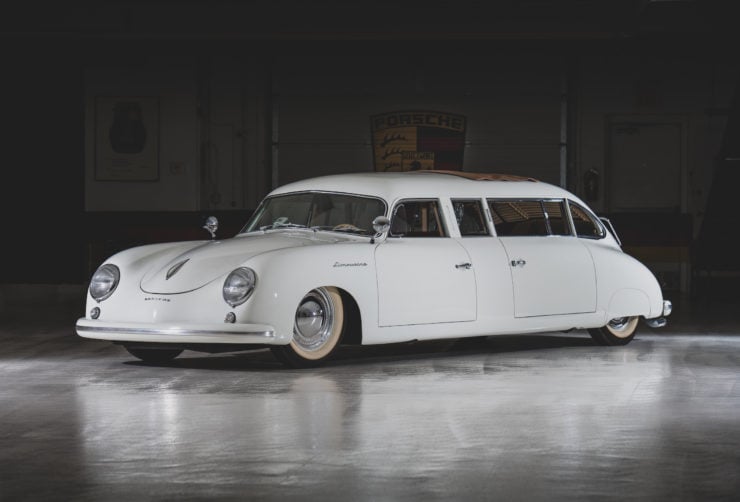 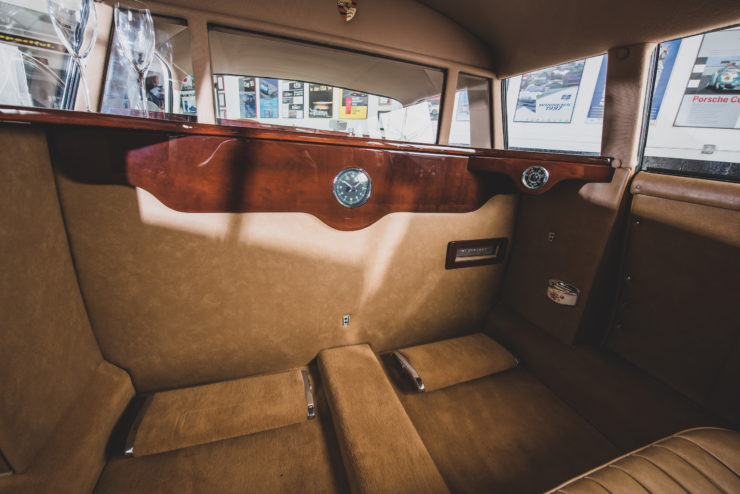 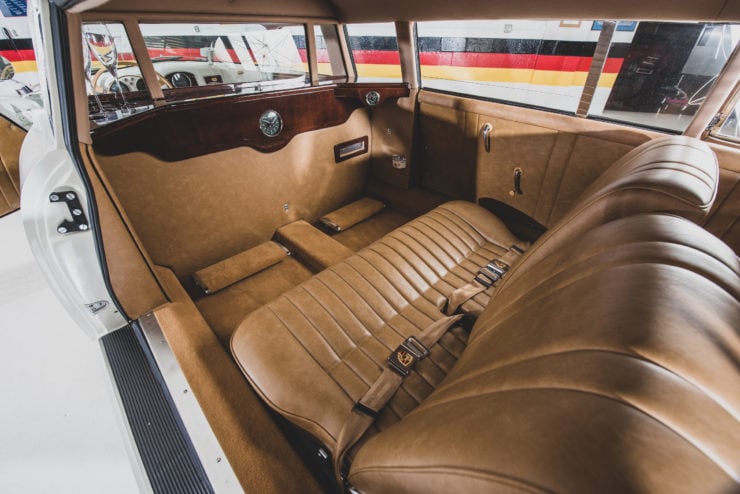 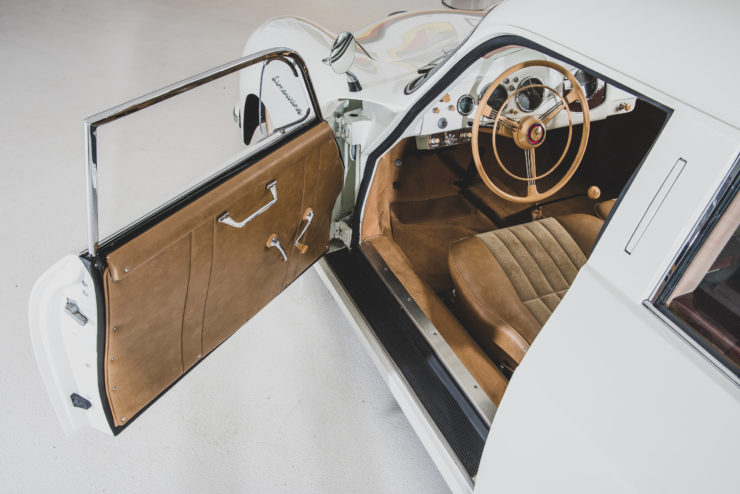 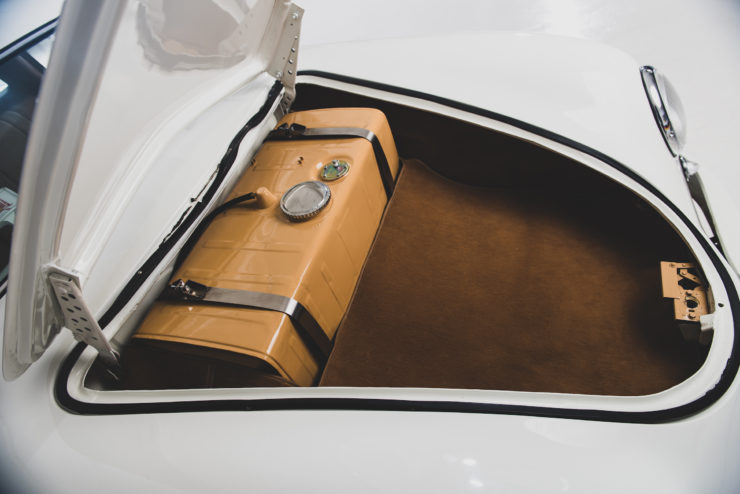 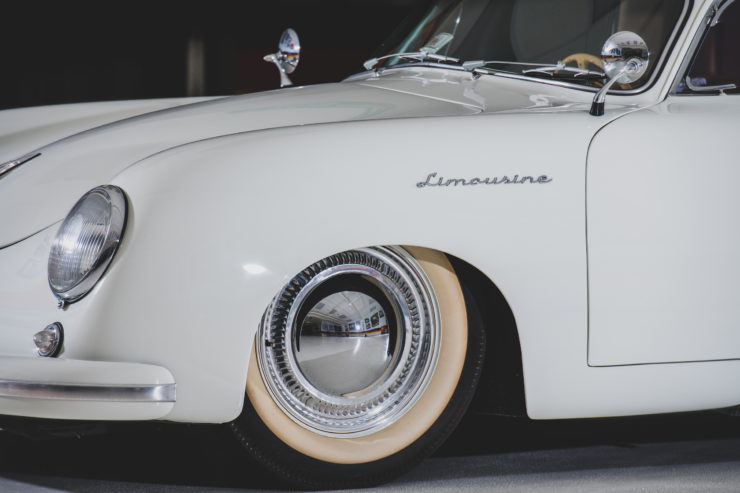 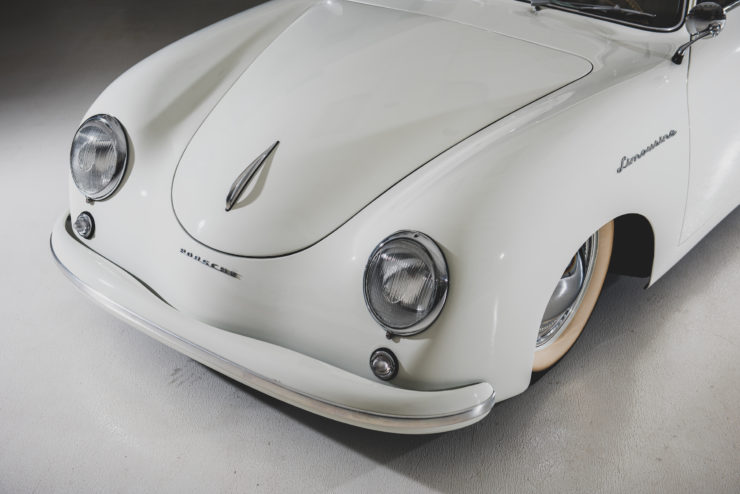 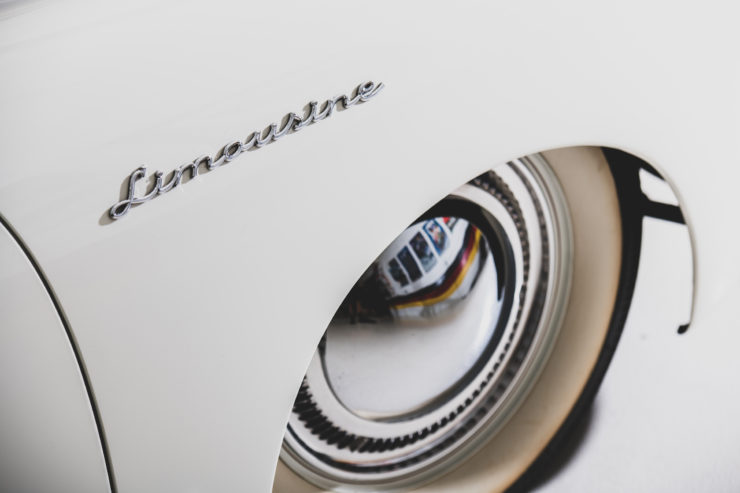 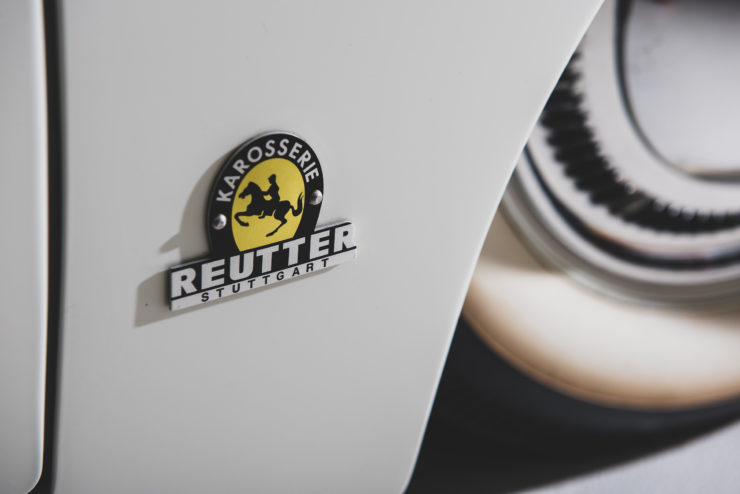 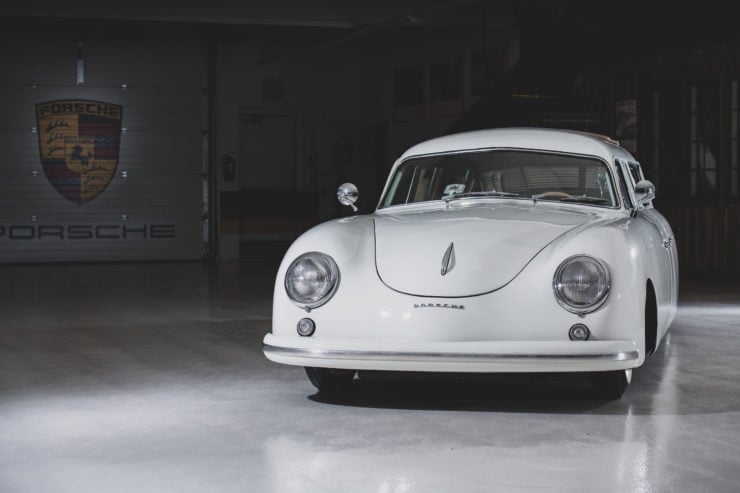