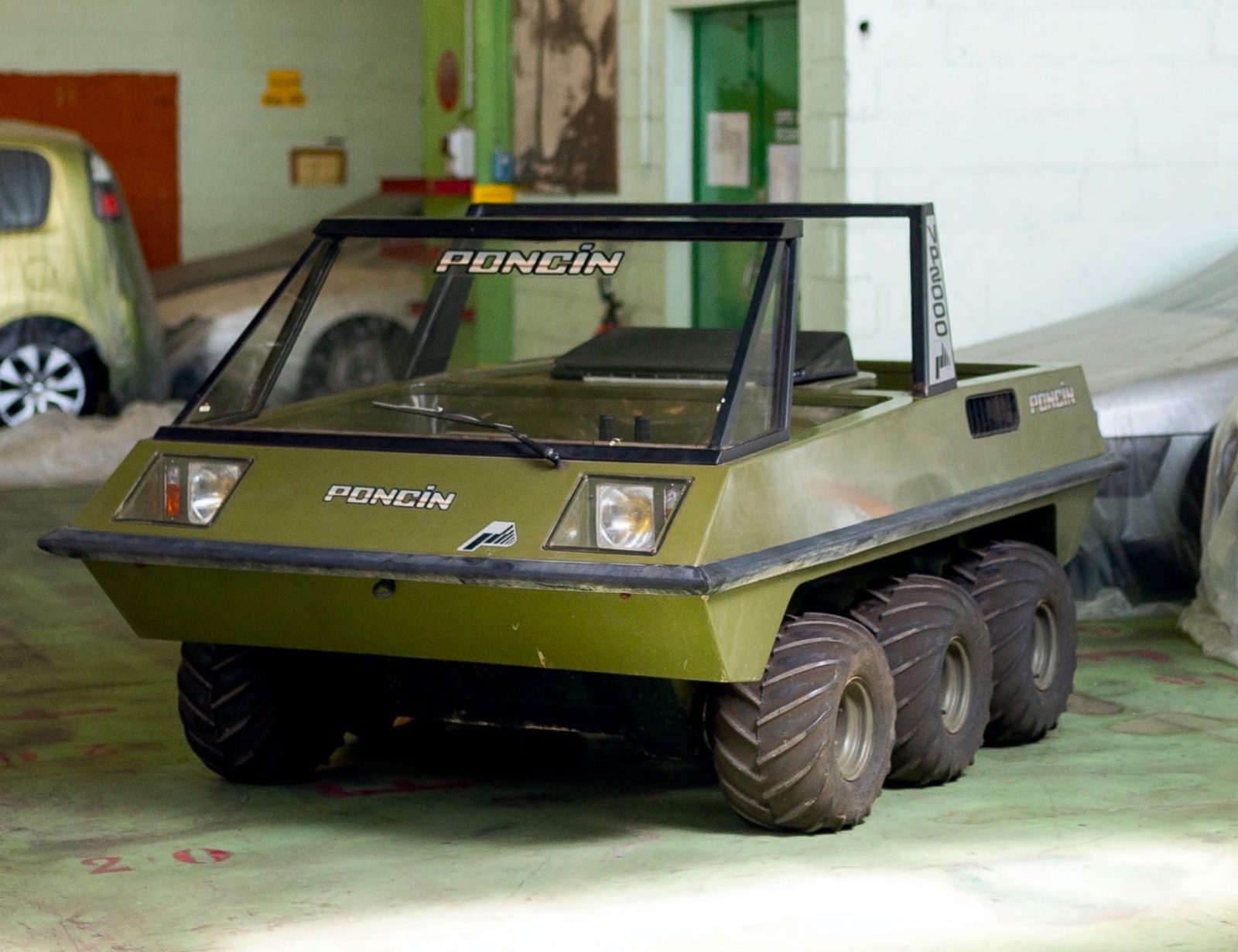 This is a Poncin VP2000, it’s a rare 6×6 amphibious vehicle developed in France in the 1970s. For obvious reasons it was nicknamed the “Lunar Jeep” and it quickly found favor in regions with difficult terrain – particularly ski resorts.

The 1970s sci-fi styling of the Poncin led to its nickname and it established the company as a respected manufacturer of 6×6 amphibious vehicles, a number of other models would follow in the VP line including tracked full-cab snow vehicles and Jeep-like 4x4s.

Véhicules Poncin SA was founded in 1974 after Gilles Poncin bought himself a 6×6 amphibious vehicle from the United States to drive around his property and have fun with his kids. 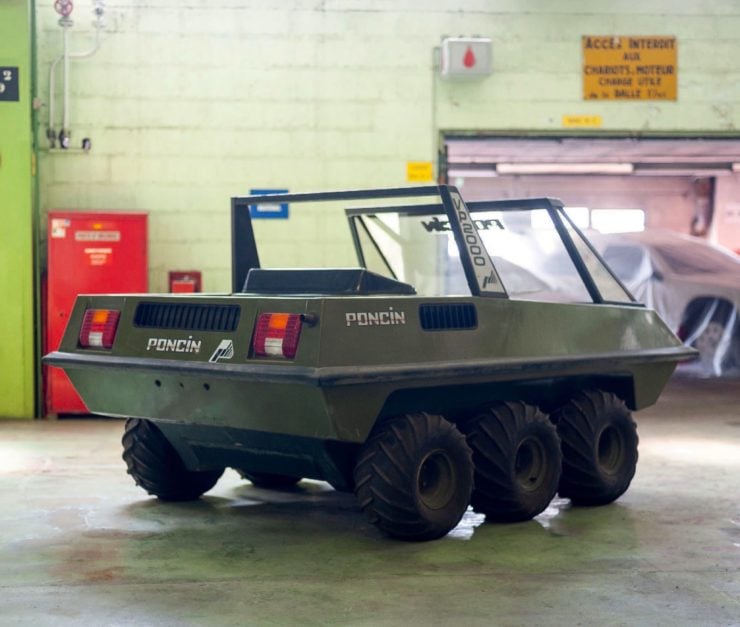 The simple fiberglass body doubles as a watertight hull, allowing it to float and be used as a boat.

The vehicle was secondhand and it proved to be in poor condition, Poncin reverse engineered it and developed his own new-and-improved version using many locally-sourced French components.

Poncin would operate from 1974 until 1993 and their vehicles are now considered highly collectible by enthusiasts, with spare parts acquisition made somewhat easier by the use of many French parts, like the Citroën 2CV engine used in the original VP2000.

The Poncin VP2000 was the first production vehicle from Poncin, it was released in 1980 after years of development and a number of prototypes. The VP2000 is both a six-wheel drive and amphibious, making it capable of crossing almost any terrain. 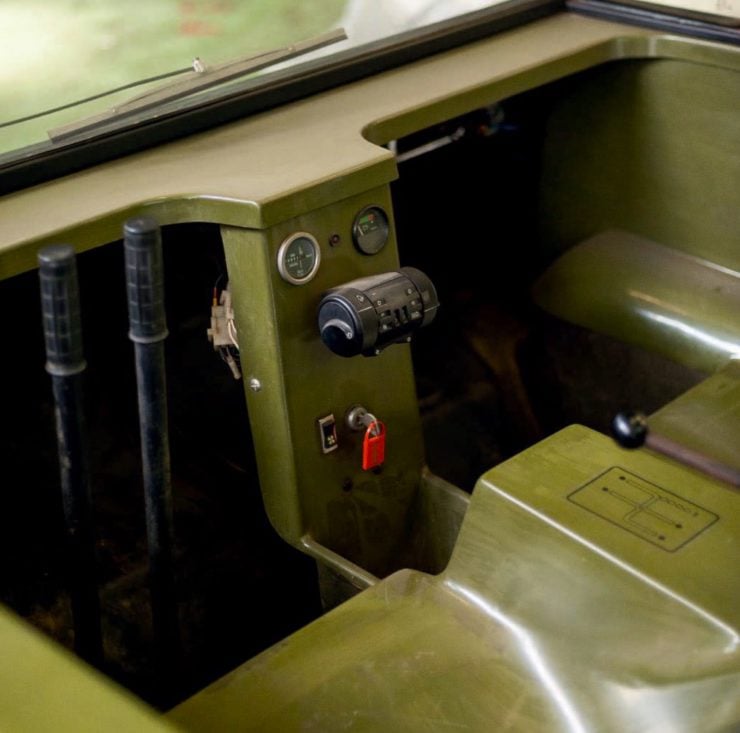 The controls consist of two sticks, you push them both forwards to go forwards, pull them both backwards to reverse and push one forward and one backward to turn.

Tracked versions of the VP2000 were made, they incorporated a rubber belt around the three wheels on each side similar to a tank, this gave the vehicle an increased footprint and made it usable on soft snow, deep mud, and other loose or challenging surfaces.

The fundamental design of the VP2000 used many pre-existing concepts, it has a watertight fiberglass tub-like body designed to double as a boat hull and three are three axles powering six wheels in total – three per side.

Turning is accomplished by driving one set of wheels forwards while the other set has a break applied, similar to the turning system used on a tank. This allows the VP2000, and other similar 6×6 vehicles, to turn 360º on the spot.

Power was provided by one of the toughest French engines ever designed, the air-cooled, flat-twin from the Citroën 2CV with 29 bhp and a displacement of 602cc. Though no powerful by any measure the 2CV engine was simple and lightweight, and with the appropriate gearing it was more than capable of moving the VP2000 along at a suitable pace. 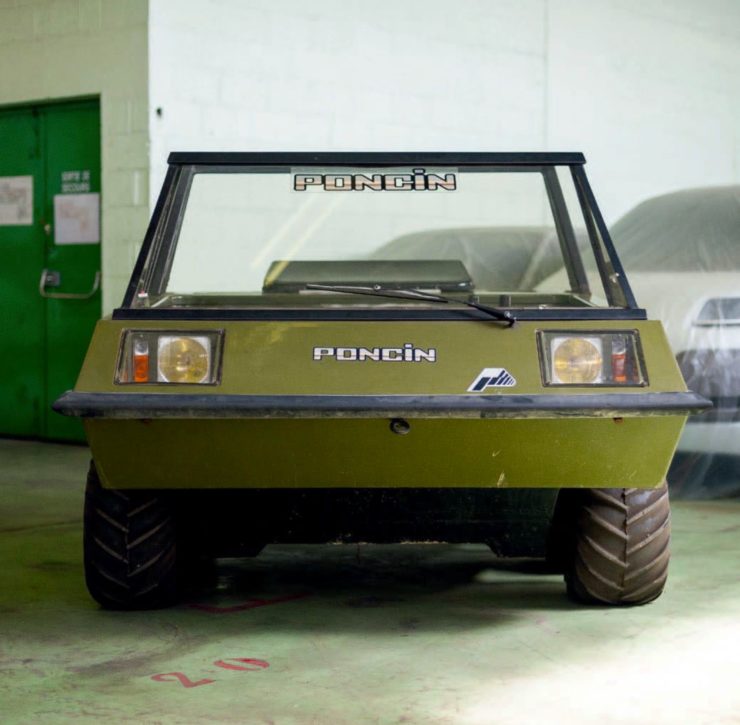 The angular design of the Poncin VP2000 led to it being nicknamed the “Lunar Jeep.”

The Poncin VP2000 you see here is an original survivor, it’s finished in army green and comes in complete condition – though it obviously needs recommissioning. 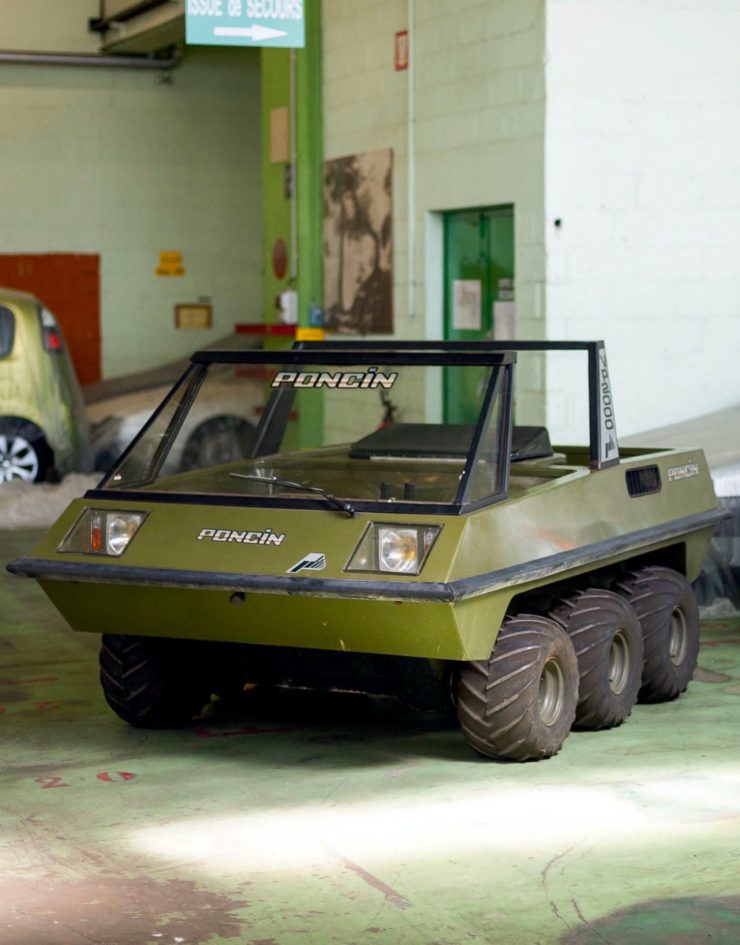 Published by Ben Branch - October 11th 2022
Related Posts
A 1968 Fuji Go-Devil: The Folding Motorcycle That Fits In A Suitcase