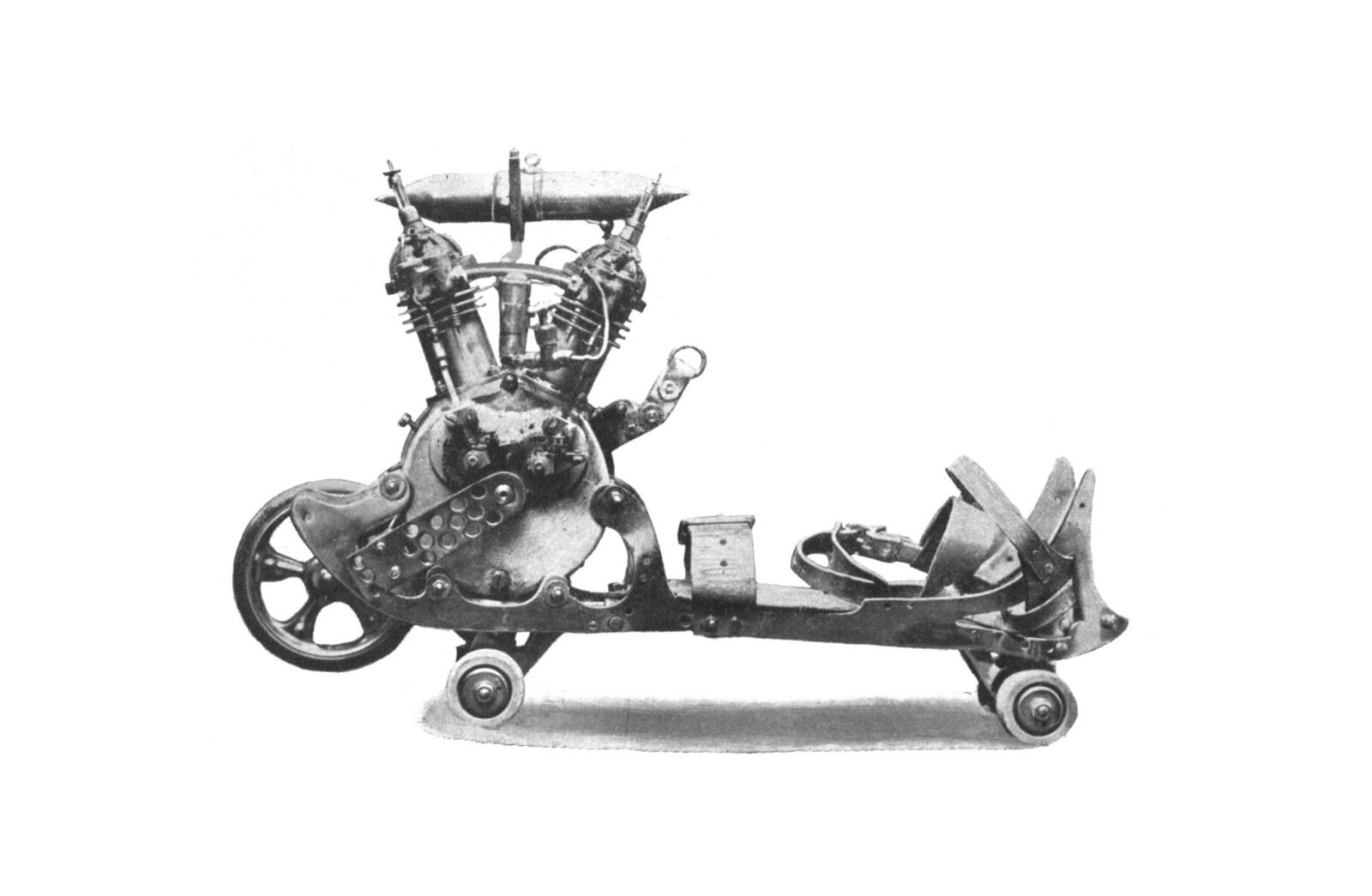 We received these remarkable images last week along with the below article, it originally appeared in the General Automobile-Newspaper on the 25th of February 1912. I’d never seen a V-twin roller skate before and I’m willing to bet that many of you haven’t either, these are from the very earliest days of the automobile and no one knew what was going to catch on and what wasn’t – so there was an explosion of remarkably creative motorized vehicles.

Henry IV of France aimed for a chicken in every peasant’s pot on sundays. If France would have such a benevolent king today, he would probably want every peasant owns an automobile. But the human being is never satisfied, demands novelties again and again. If the peasant would get the automobile, he probably would want a garage, too. Since this is hard to turn into a reality, he probably would want to strap on a little car underneath his feet in the style of mercury (the roman god). This would be the easiest solution for the mass distribution of the automobile, not only for the peasant but for the whole mankind.

Or maybe not? Assumed the human would just had to strap on his automobile as a motor-driven roller-skate: wouldn’t he feel miserably, if, as he now moves just slightly faster on the ground, an aeroplane would fly beyond him? He would feel paltry and say to himself: I’m still not the real mercury, because he has wings on his heels and is actually an “aero-mercury”. You would need to be able to strap a small aeroplane underneath your feet and, hey presto, “everything that has wings on it flies” – fly away.

Alright, it is just a small step from a normal roller-skate to a self-moving roller-skate. Many inventors tried to take this step. We remember the construction that was presented at the Paris Salon in 1906 and was pictured and described by us (Nr 8, page 11). M. Constantini, the constructor, had his self-moving roller-skates equipped with 1,5 hp motors. He worn a belt around his waist with batteries for the ignition and a contact breaker to turn the engine on or off. The construction shared the same fate of many other inventions and it wasn’t heard from again. Now another constructor, M. Mercier, picked up this idea again. We present his automobile roller-skate with various pictures here. The first considerable difference is he only uses one motor-driven roller-skate, while the second roller-skate is an ordinary roller-skate like the ones used in skating. The automobile roller-skate is powered by a two-stroke v-engine with 1,25 hp. Mercier claims, it is able to cover a distance of 50 kilometres with a speed of 30 km/h before you’re running out of fuel/petrol. The “patin automobile”, which is equipped with a friction clutch and pivot bearings for the wheels, is able to handle 8% gradients. The driver wears the batteries and an ignition coil attached to a belt, on his right foot he wears the powered roller-skate, on the left foot he wears the ordinary one.

If the automobile roller-skate would be a success, we would really be just one step away from the “aero-mercury”. In France the idea of a flying bicycle, driven by muscle power, is met with great interest. Peugeot offered a reward of 10.000 french franc and the parisian paper “La Justice” even offered 100.000 franc. They were over already over 60 registrations for Peugeot’s reward after a few days. Maybe our constructors get inspiration from this competition, so they can turn the aero-mercury, the modern messenger of the gods, into a reality.

Text beneath the picture: The automobile roller-skate, Mercier-system You can see the two-stroke v-engine, which outputs 1,25 hp, on the very top is the fuel tank, on the sides are the straps. Only one of the two roller-skates is engine-powered. 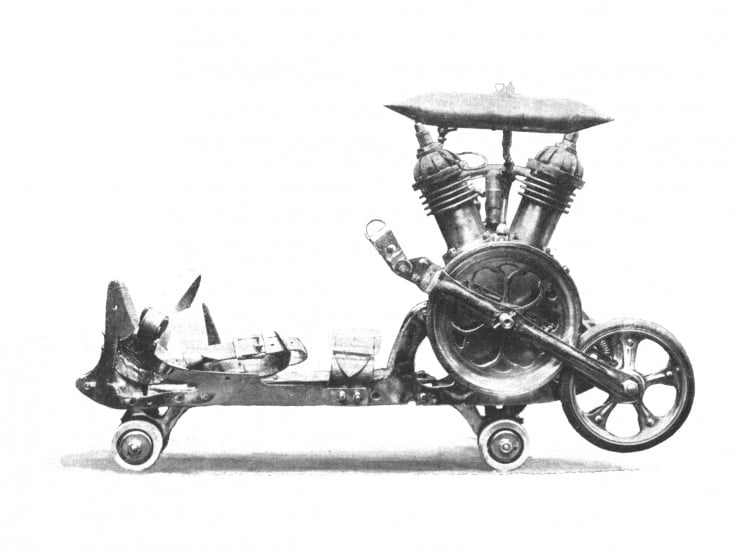 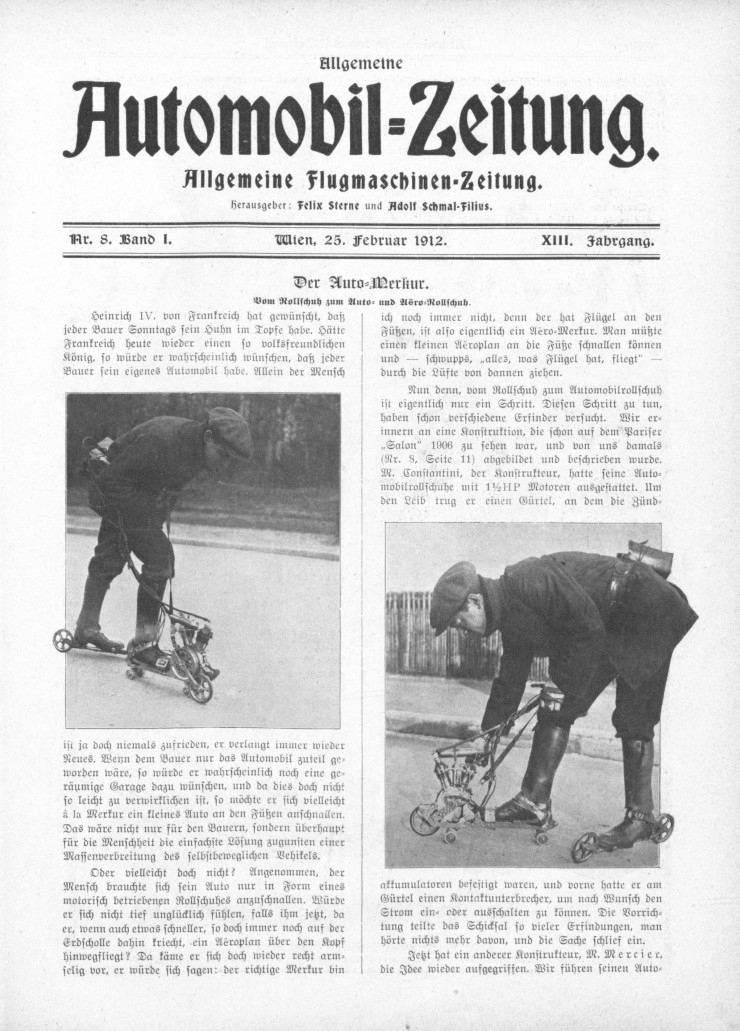 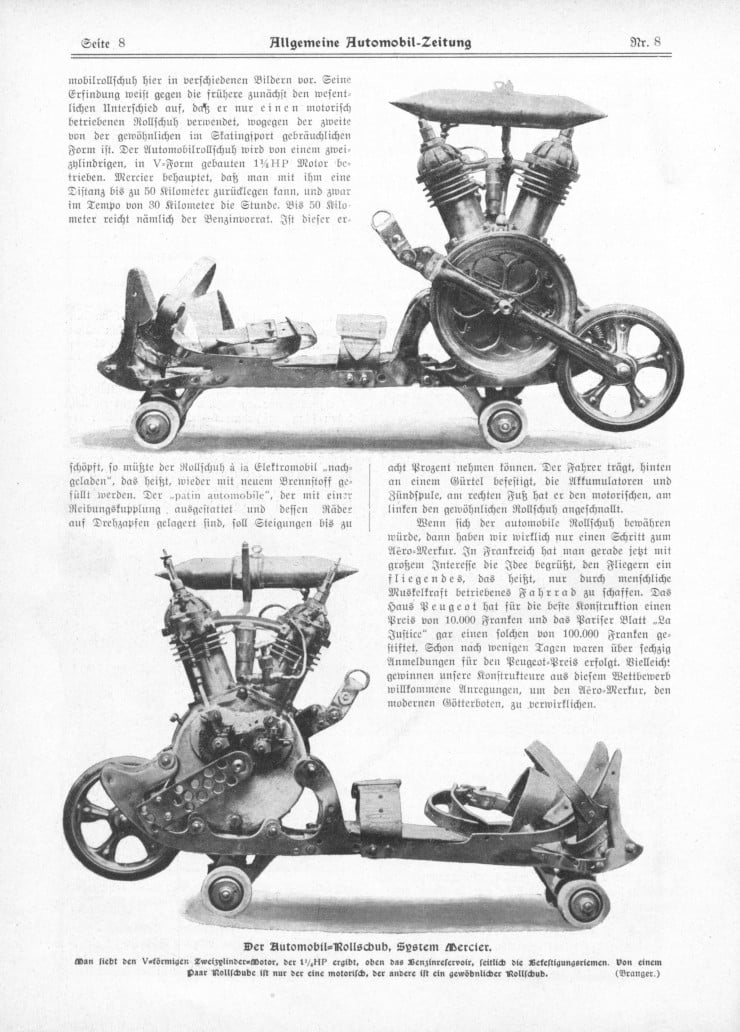 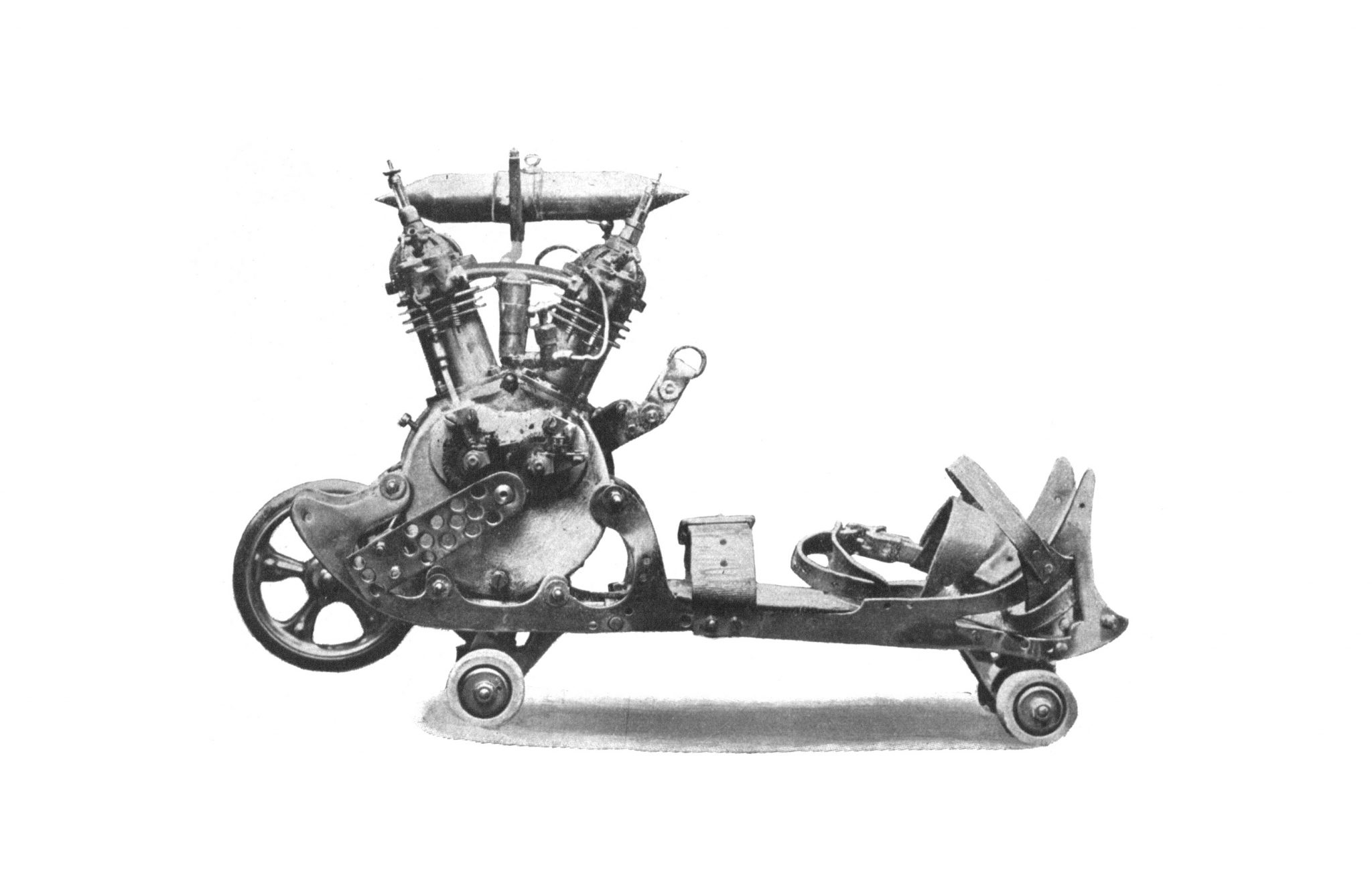