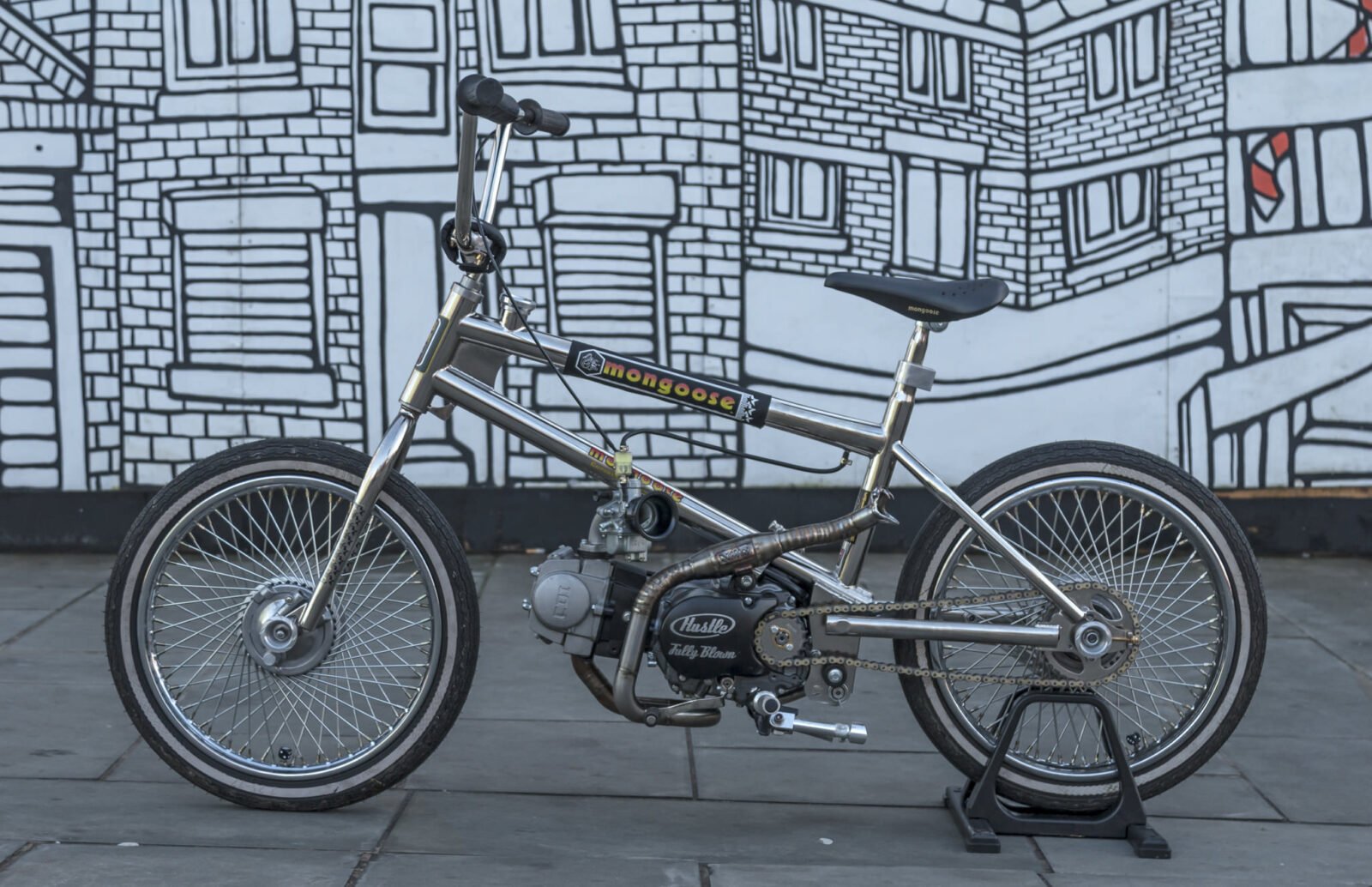 Before you get out the pitchforks and flaming torches let me put your minds at ease – no vintage Mongoose Californian BMX bikes were harmed in the production of the motorized bike you see before you.

The frame isn’t an original Mongoose unit, it was made by Adam Ryan at Kepspeed in the UK as a semi-replica of the famous BMX frame with the addition of mounts for an engine, and a top tube that doubles as a fuel tank.

The bike is the work of Tony at Sub Kulture Cycles, a disarmingly friendly guy who is currently working on an ambitious plan to build motorized versions of 12 famous BMX bikes, and he’s doing it all in his home garage. 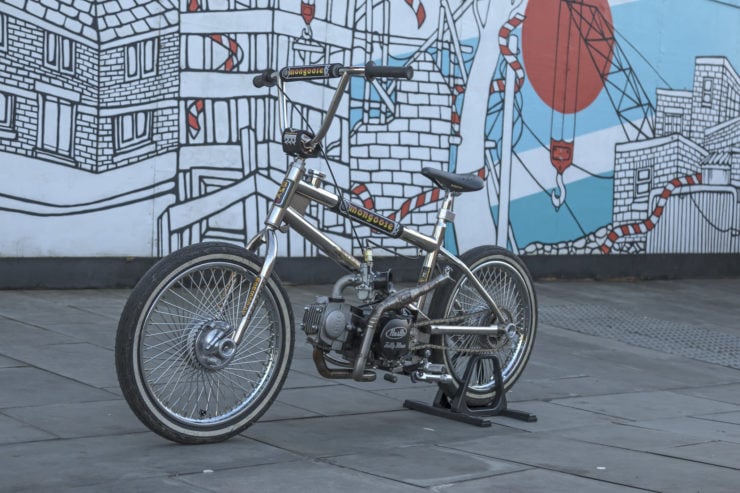 In BMX circles Mongoose is one of the true icons, if you’re anything like me and you spent time in the ’70s and ’80s riding BMX bikes around your neighbourhood you’ll know that anyone lucky enough to be riding a Mongoose likely also had a Nintendo and a backyard swimming pool.

The company was founded by Skip Hess in 1974, the first product wasn’t a bike but a wheel – the MotoMag One, a high-strength magnesium alloy wheel that would far outlast its spoked counterparts.

Over the following decades Mongoose turned out a series of revolutionary BMX bikes as well as new versions of the MotoMag, and one of the first production mountain bikes with front and rear suspension.

In recent years there’s been increased interest in some of the more unusual motorized bicycles both for the fun factor and as part of the ongoing revolution in urban and suburban transportation. Companies have popped up around the world offering engines and mounting kits specifically for bicycles, and companies like Kepspeed offer custom frames and other parts.

When Tony was outlining his plans for this build he started with the frame choice, once that was settled he sourced all of the correct stickers and decals for the frame to complete the illusion. He did such a good job that he’s had to calm down strangers on the street who saw the bike and thought he’d chopped up an original Mongoose to make it. 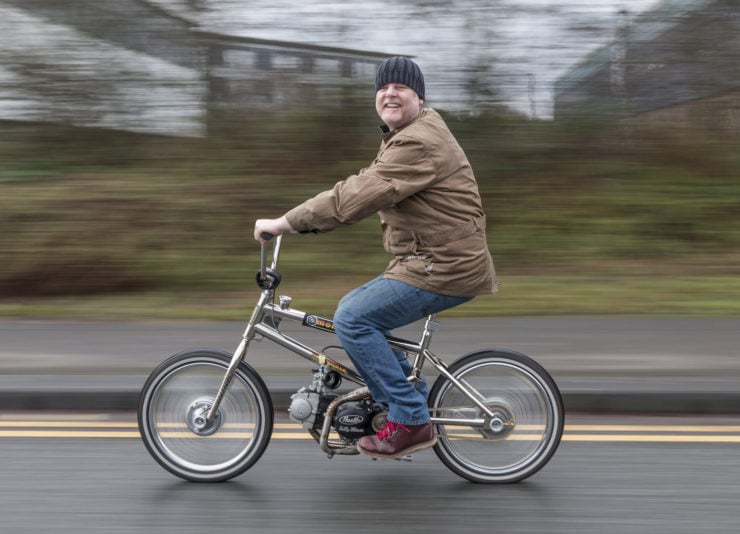 Mark Nadin from Black Crow Engineering took care of the bespoke billet parts required by the build, Vernon Moss took care of the nickel and gold plating, and a pair of 72 spoke rims were sourced from Kepspeed – using a Honda drum brake up front for additional stopping ability.

The engine is a Lifan 4-speed 125cc semi-automatic engine fitted with a Molkt VM 26 carburettor and a custom exhaust fabricated by Nath at NAW Automotive, the tail pipe features a striking viper that’s proven hugely popular with kids and adults alike.

The bike is also fitted with original CW BMX handlebars, a Kashimax BMX seat, an original Mongoose pad set, and a Renthal 420 chain and sprocket.

With the bike’s low weight and punchy 125cc engine it’s capable of considerably more speed than we’re used to seeing from a BMX bike, and no one had yet had the guts to take it onto a half pipe. If you’d like to see more of Tony’s work or get in touch with him you can click here to follow him on Instagram. 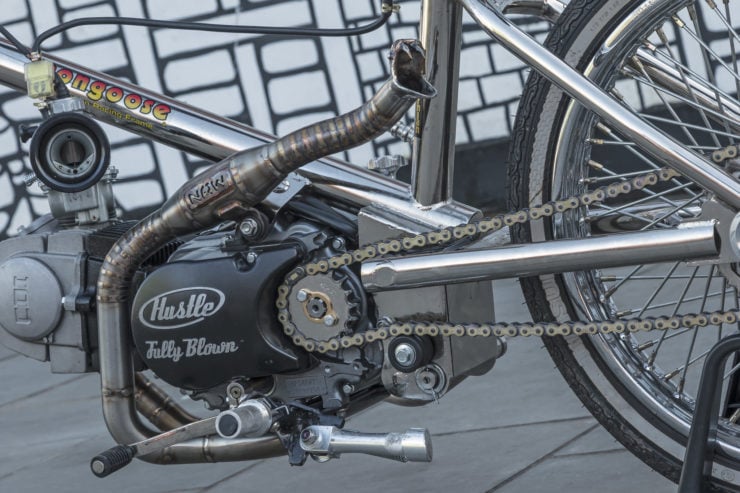 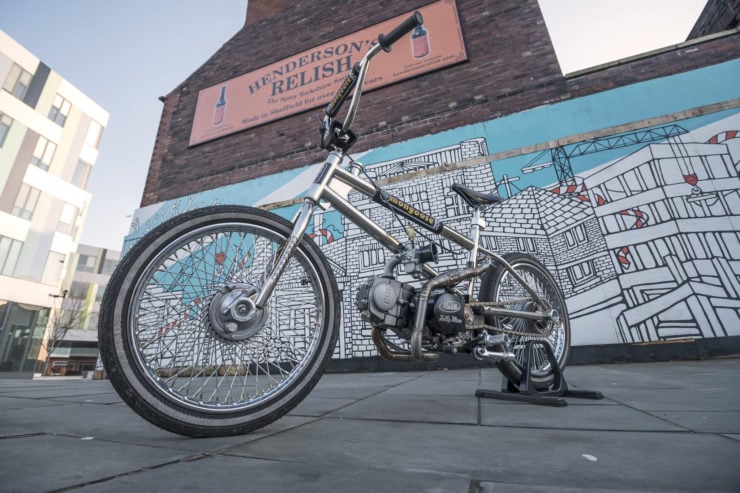 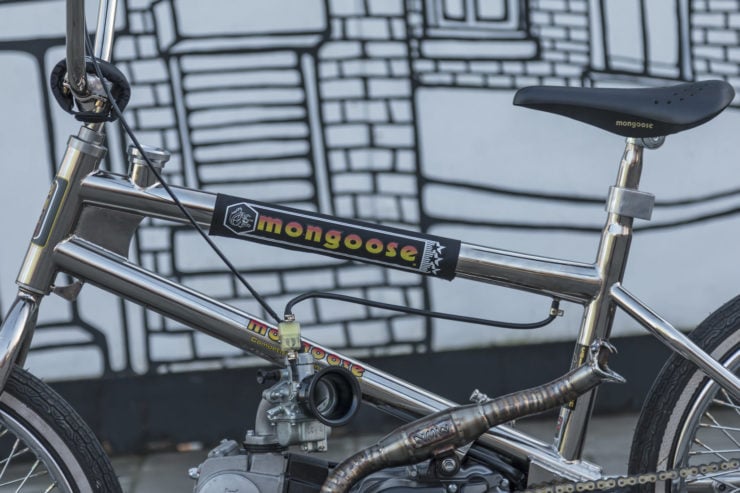 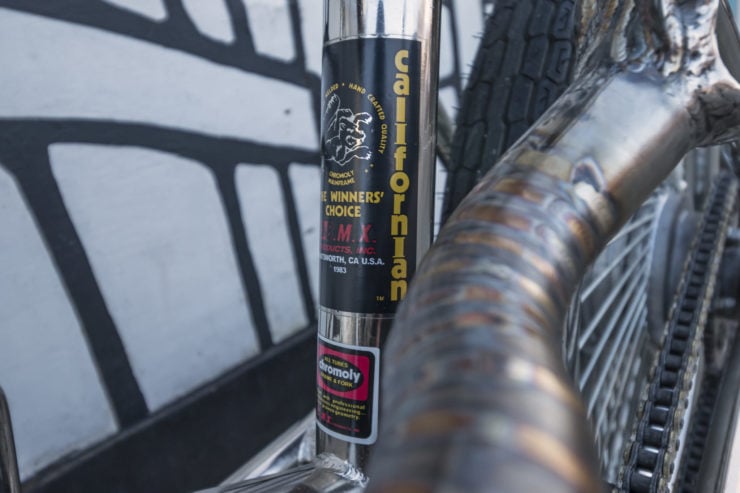 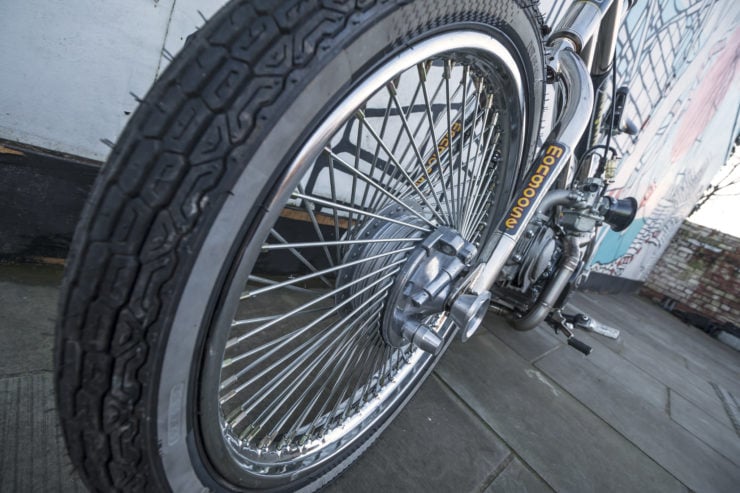 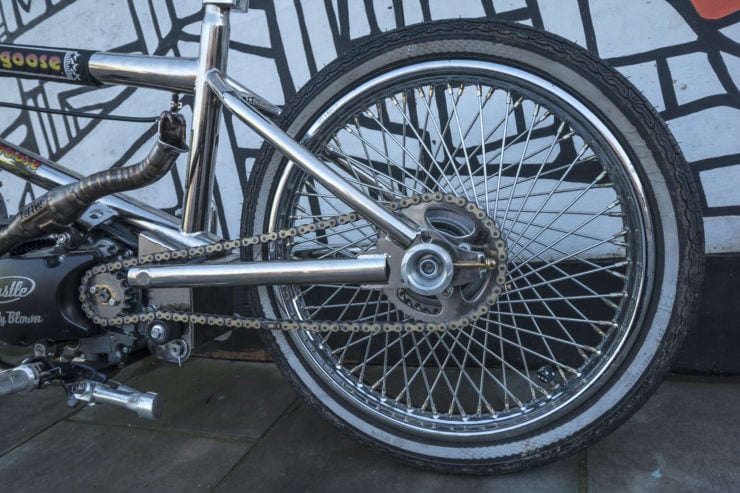 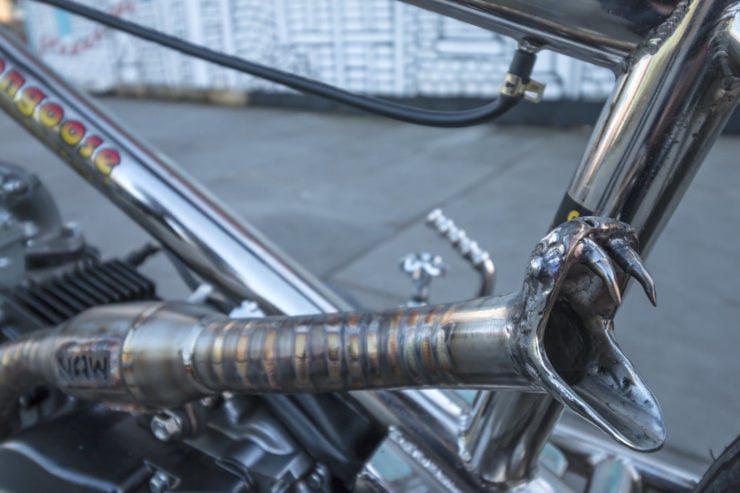 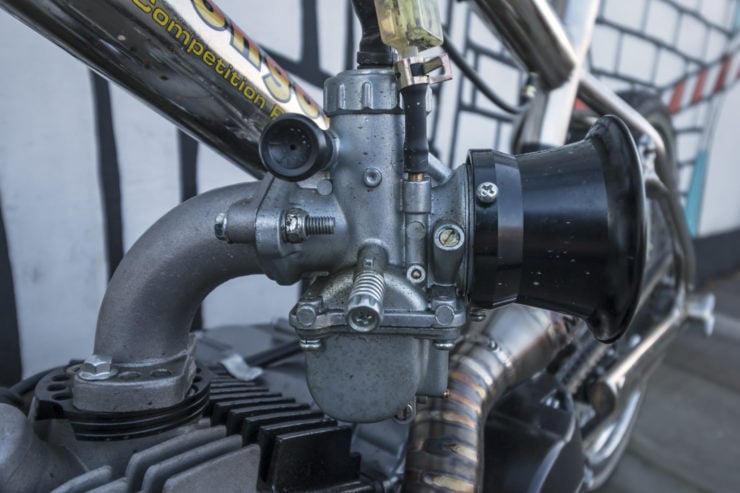 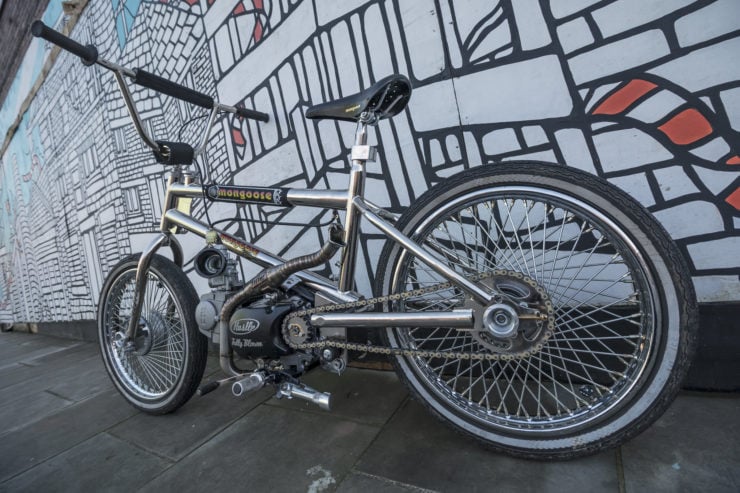 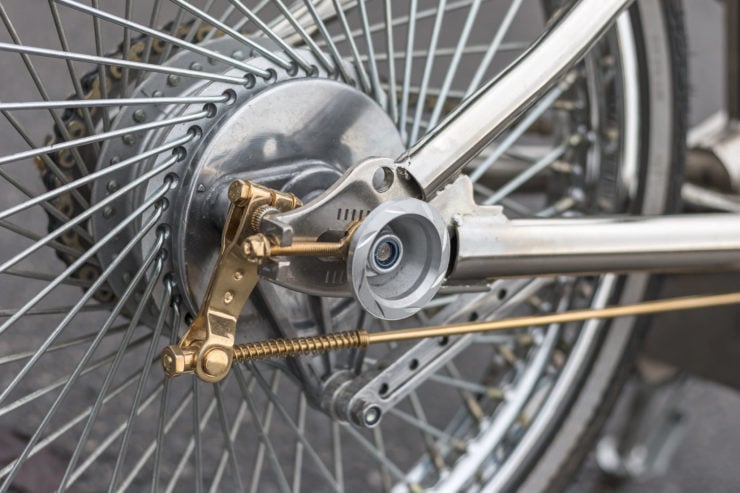 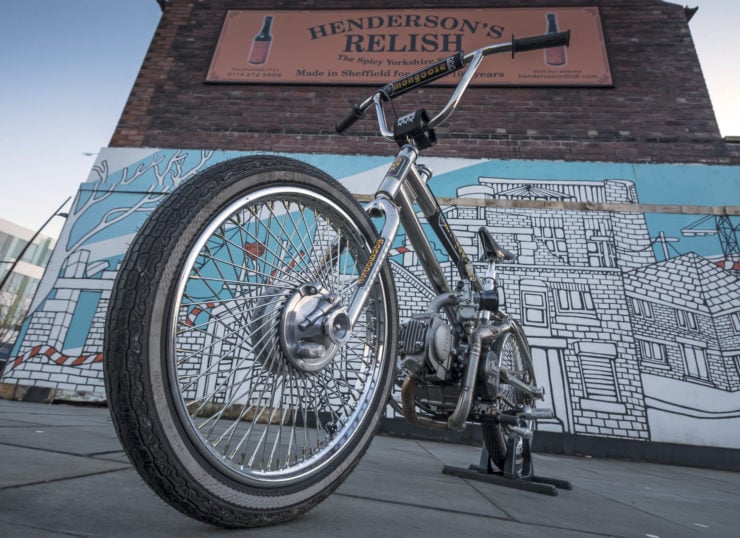 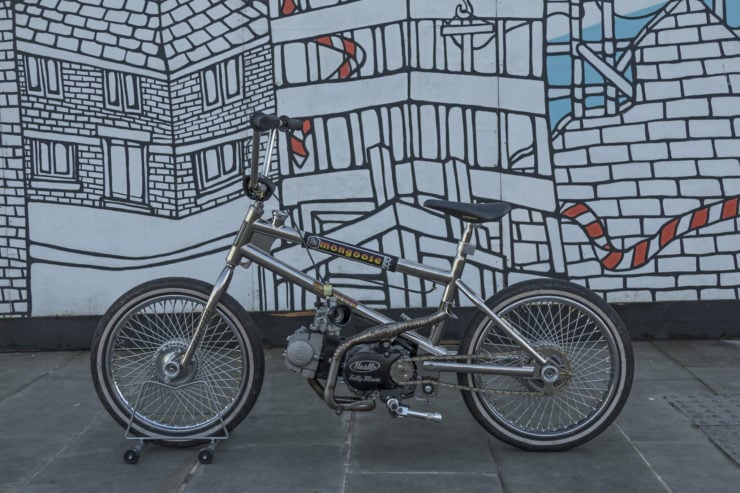 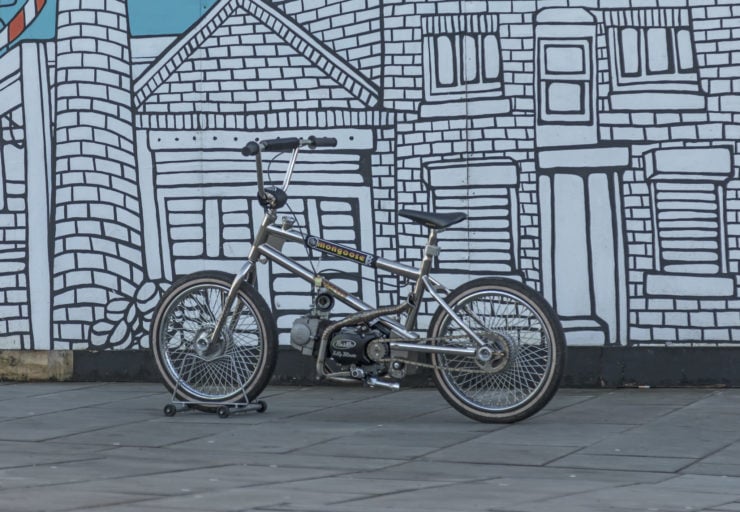 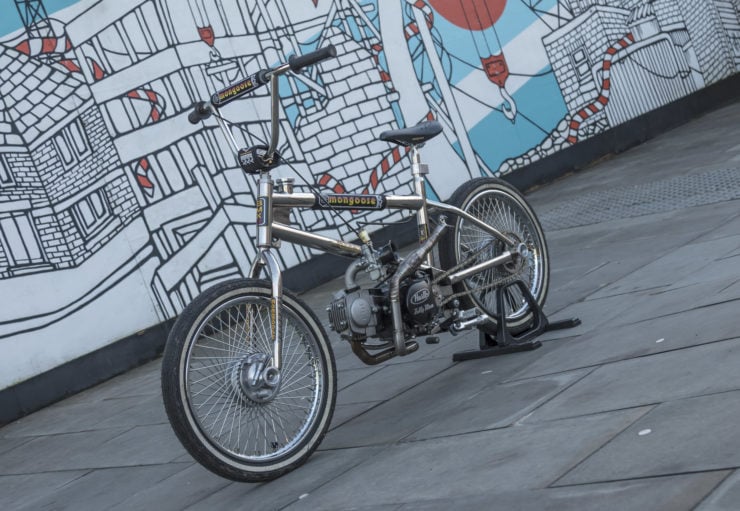 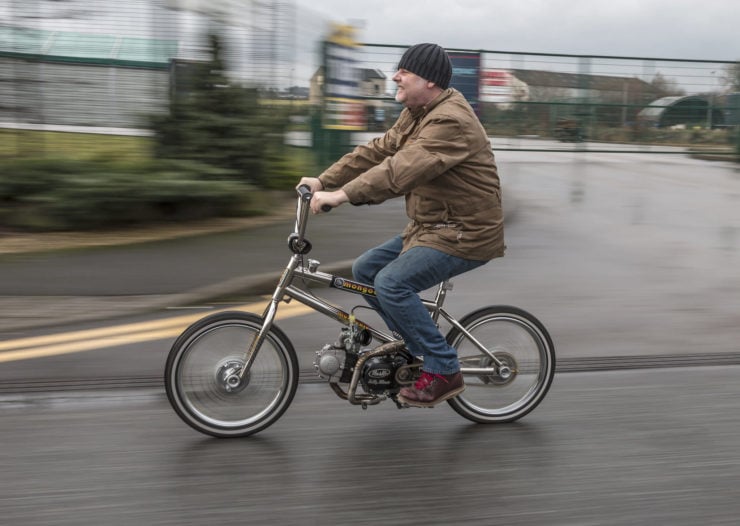 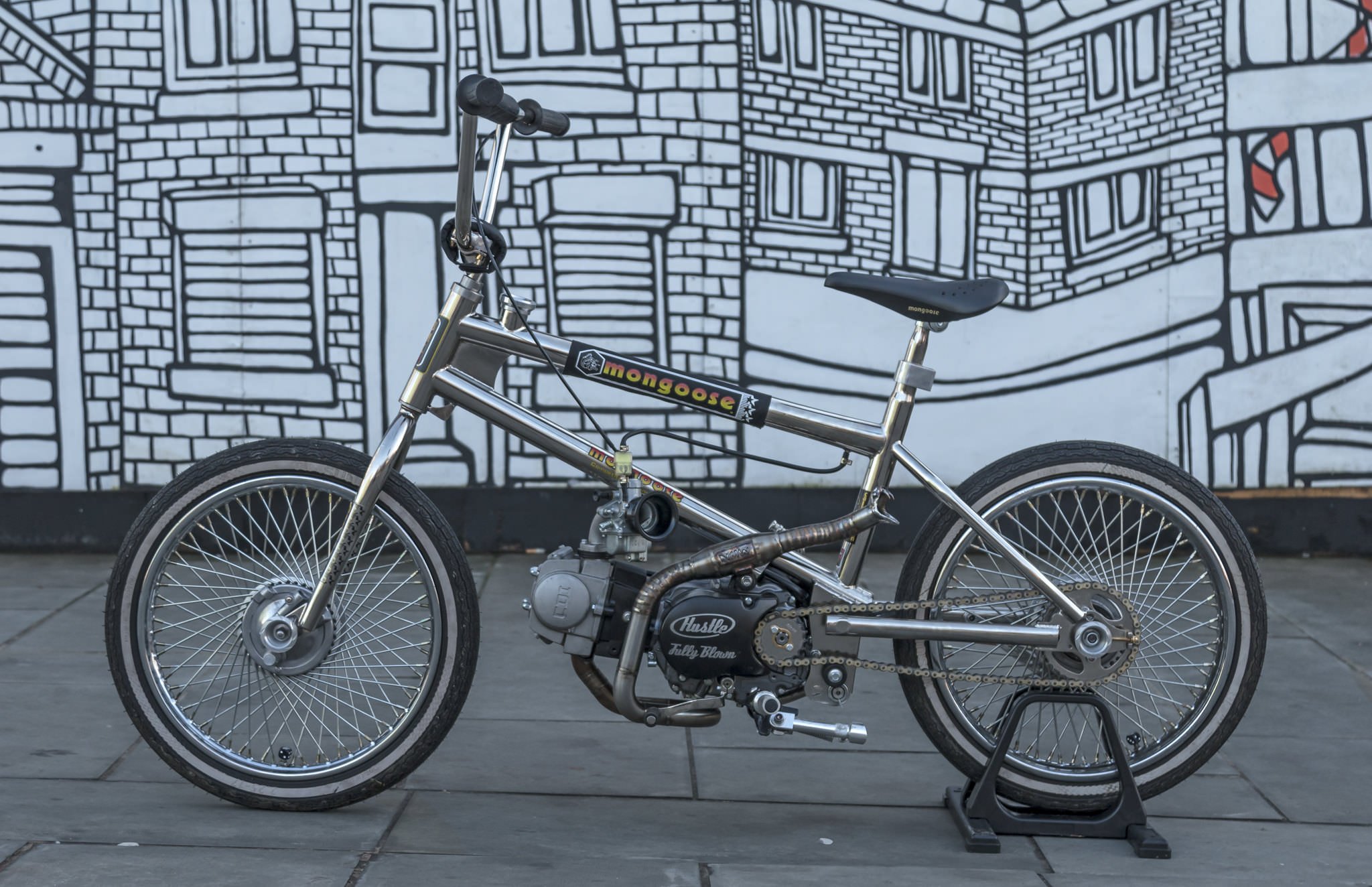