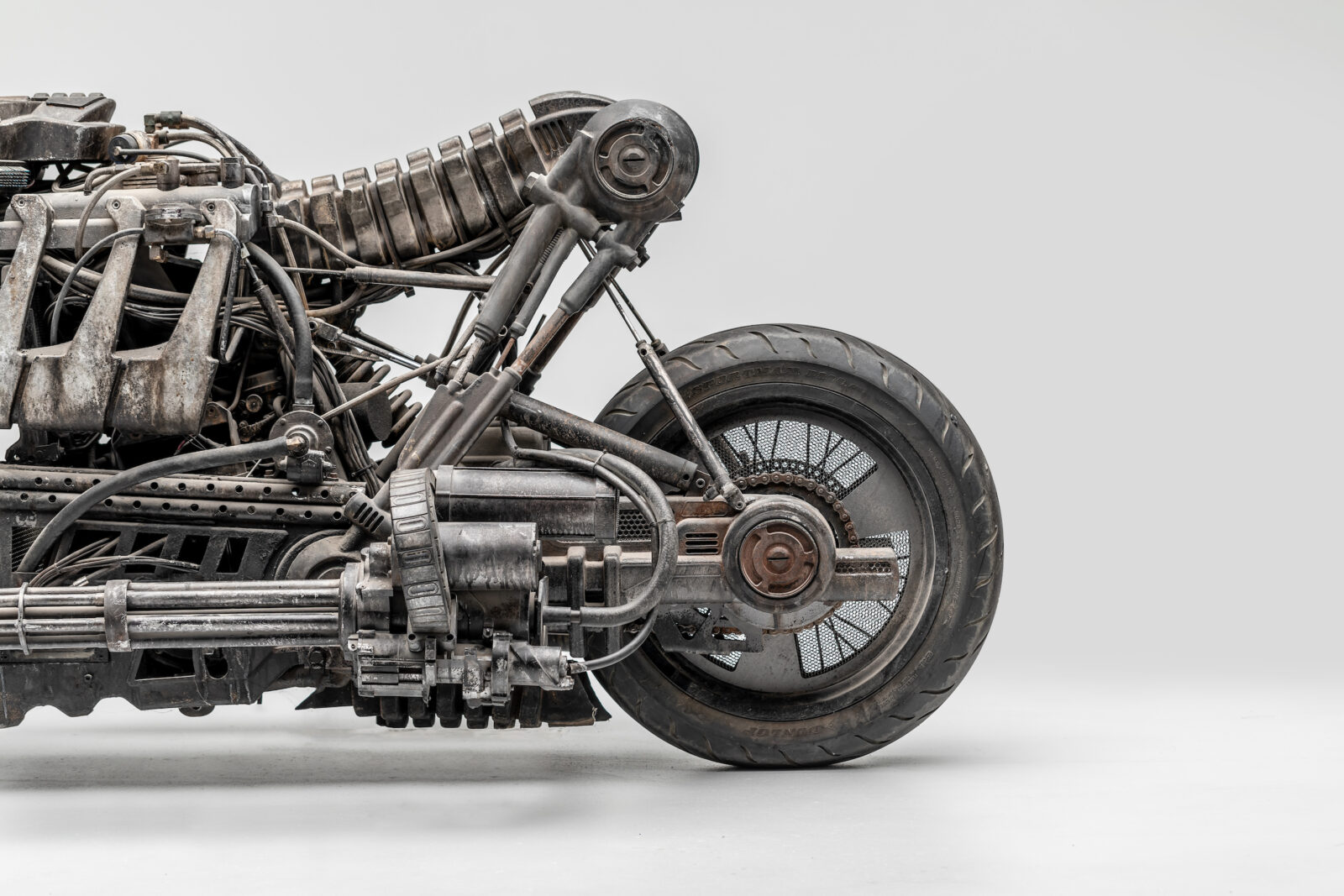 It isn’t widely known that the Moto-Terminator motorcycles from the Terminator Salvation movie were heavily customized Ducati Hypermotards.

The primary scene in the movie that features the Moto-Terminators is one of the highlights of the film, most of the footage used in the chase scene was filmed traditionally using stunt riders on Hypermotards, this was edited in post to replace the stunt riders with Moto-Terminators.

Although it was largely digital Moto-Terminators that were used during Terminator Salvation, a small number of fully-functional bikes were built. There’s no reliable information on how many – but we do know it’s at least one, and possibly as many as four. 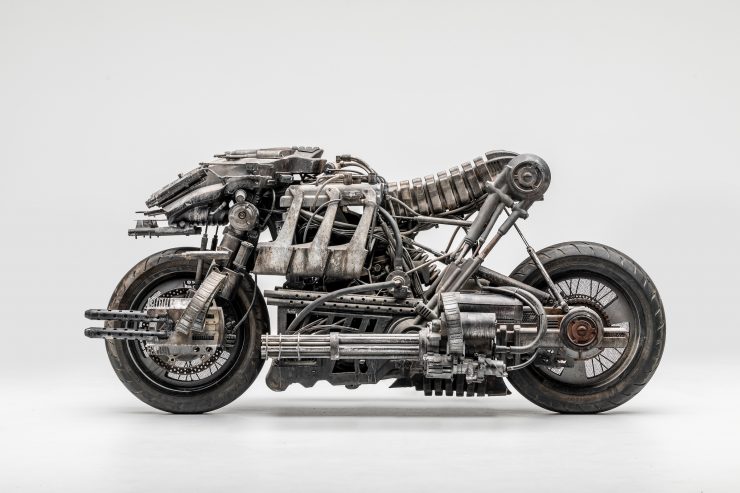 Both the director (McG) and Christian Bale are both avid motorcyclists, so McG decided early on that the Moto-Terminator should be based on a production Ducati motorcycle. Initially both the Monster and the Hypermotard 1100 were used, however the bikes used in the film were Hypermotards.

The designer behind the Moto-Terminator was Victor Martinez, the task was more difficult than it would have normally been as he need to keep the motorcycle 100% human ridable. This means the suspension, wheelbase, and engine all needed to stay in place, and the handlebars, seat, and footpegs all needed to be functional.

Later in the film when John Connor (Christian Bale) needs to get to Skynet Central in San Francisco to rescue Kyle Reese (Anton Yelchin) he traps and hijacks a Moto-Terminator – riding it in the traditional way once the AI system had been disabled.

The short behind the scenes documentary below gives significant insight into the creation process of the movie bikes including footage of them being ridden by both the stunt rider and Christian Bale himself. It looks like quite a handful due to the low-slung gatling guns on either side which seem to significantly reduce the available lean angle.

The Hypermotard 1100 weighs in at 177 kilograms (390.2 pounds) and it has the signature Ducati tubular steel trellis frame, a 6-speed gearbox, and an upright seating position reminiscent of a motocross or enduro bike.

The aggressive styling and punchy performance of the first Hypermotard has won it fans around the world. Newer, more refined models have been released in more recent years but none quite match the character of the original, and first generation models remain a popular bikes with secondhand buyers.

See The Moto-Terminator In Person

If you’d like to see the Moto-Terminator in person you’re in luck, it’s one of the headliners of a new show at the Petersen Automotive Museum in LA. The show is called “Hollywood Dream Machines” and it opens on the 5th of May. If you’d like to read more or get tickets you can click here. 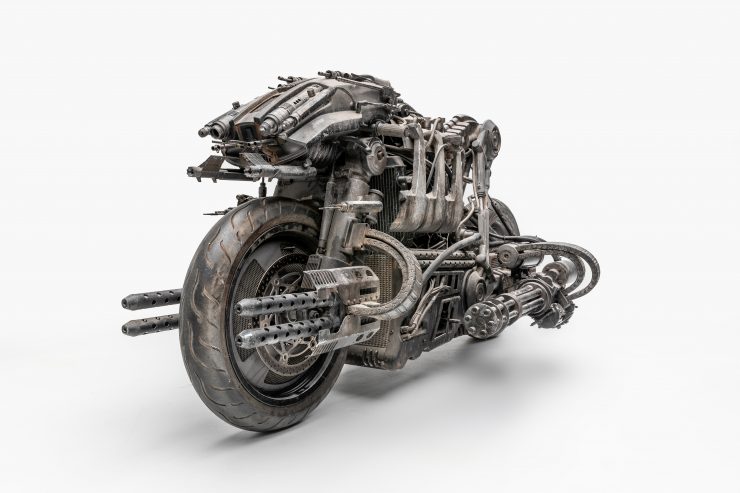 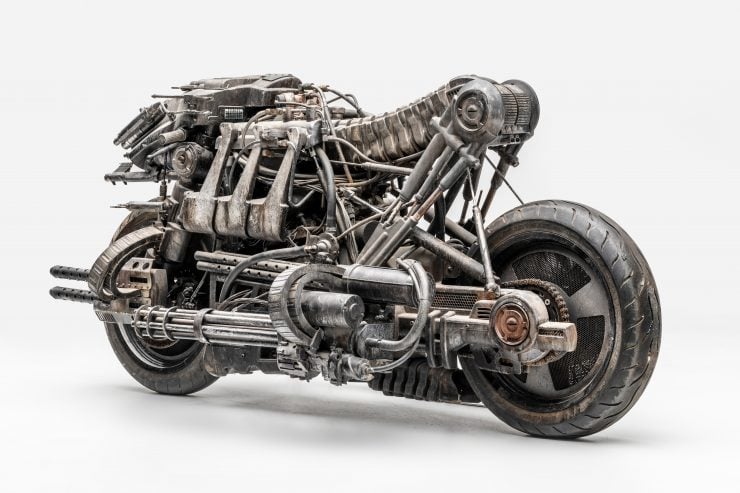 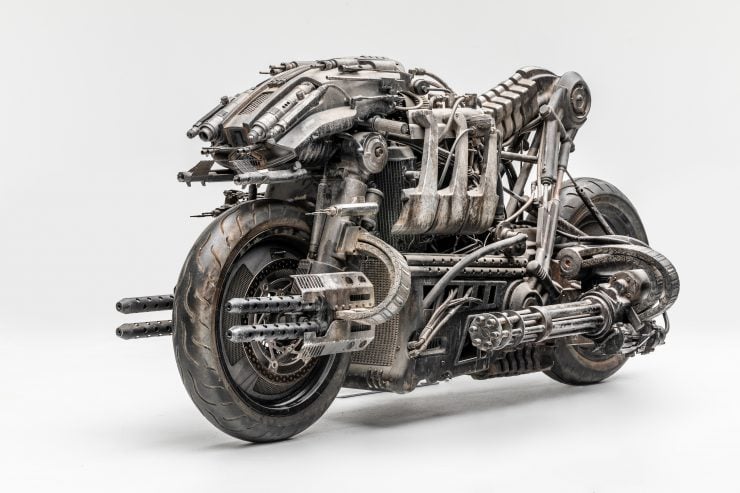 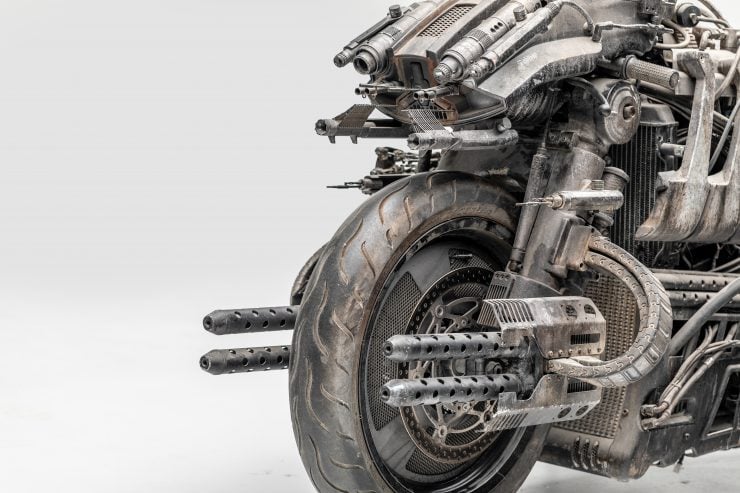 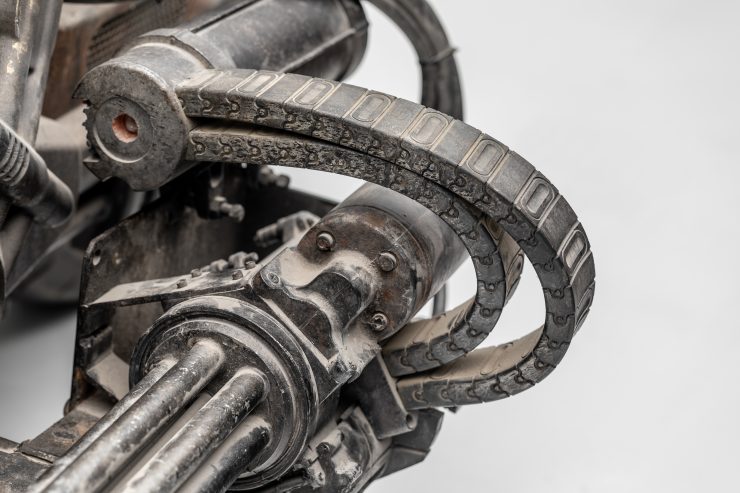 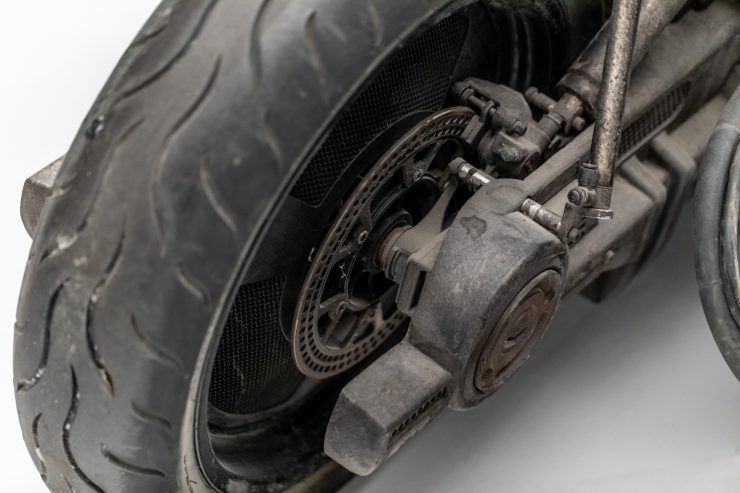 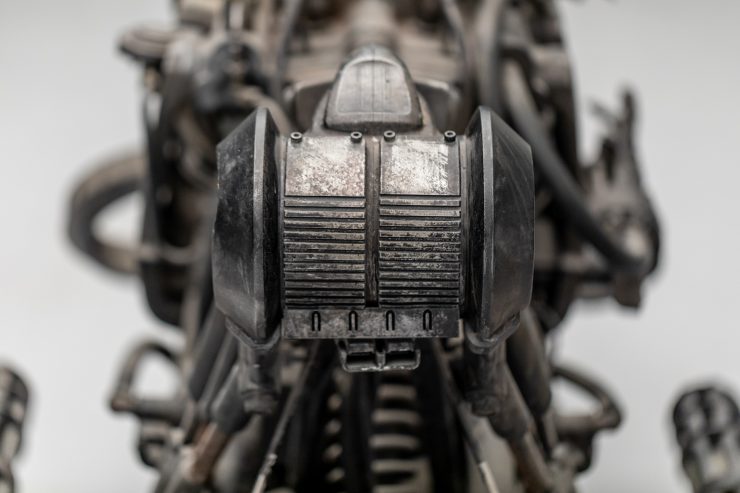 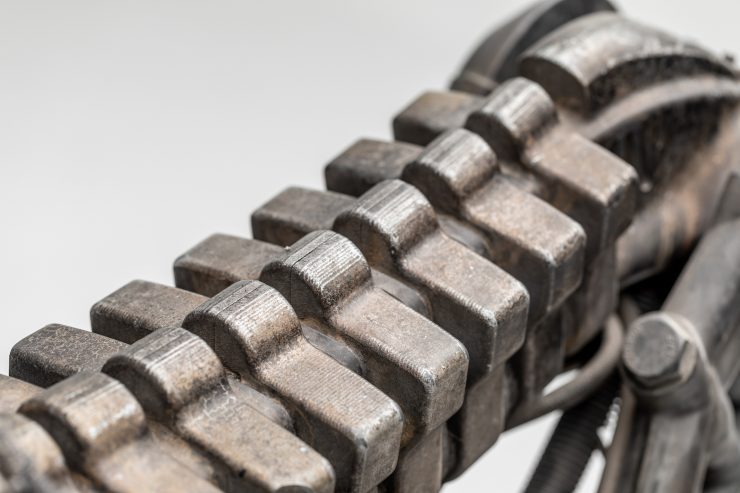 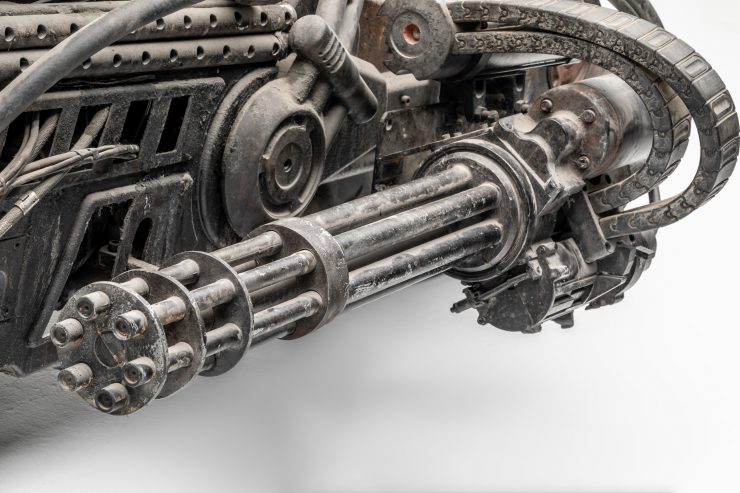 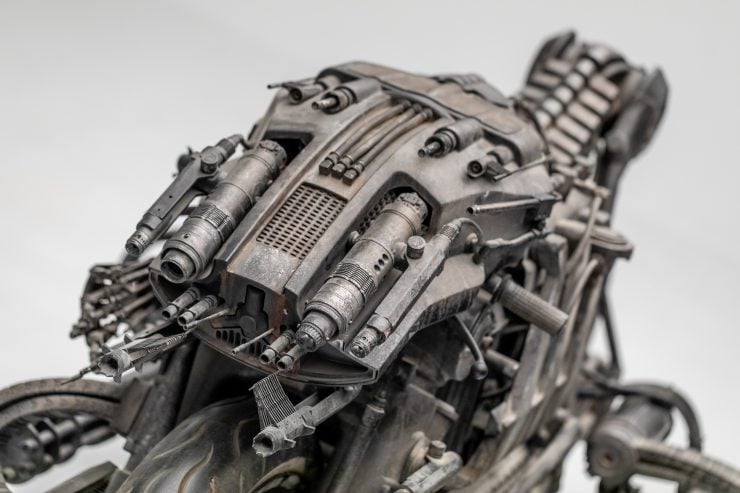 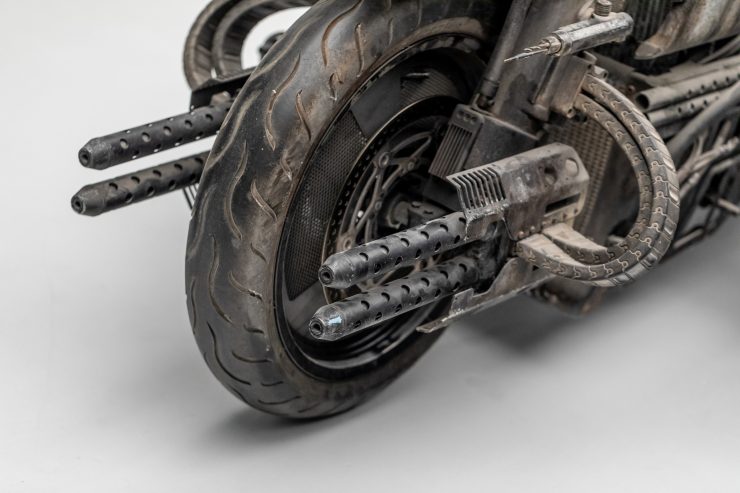 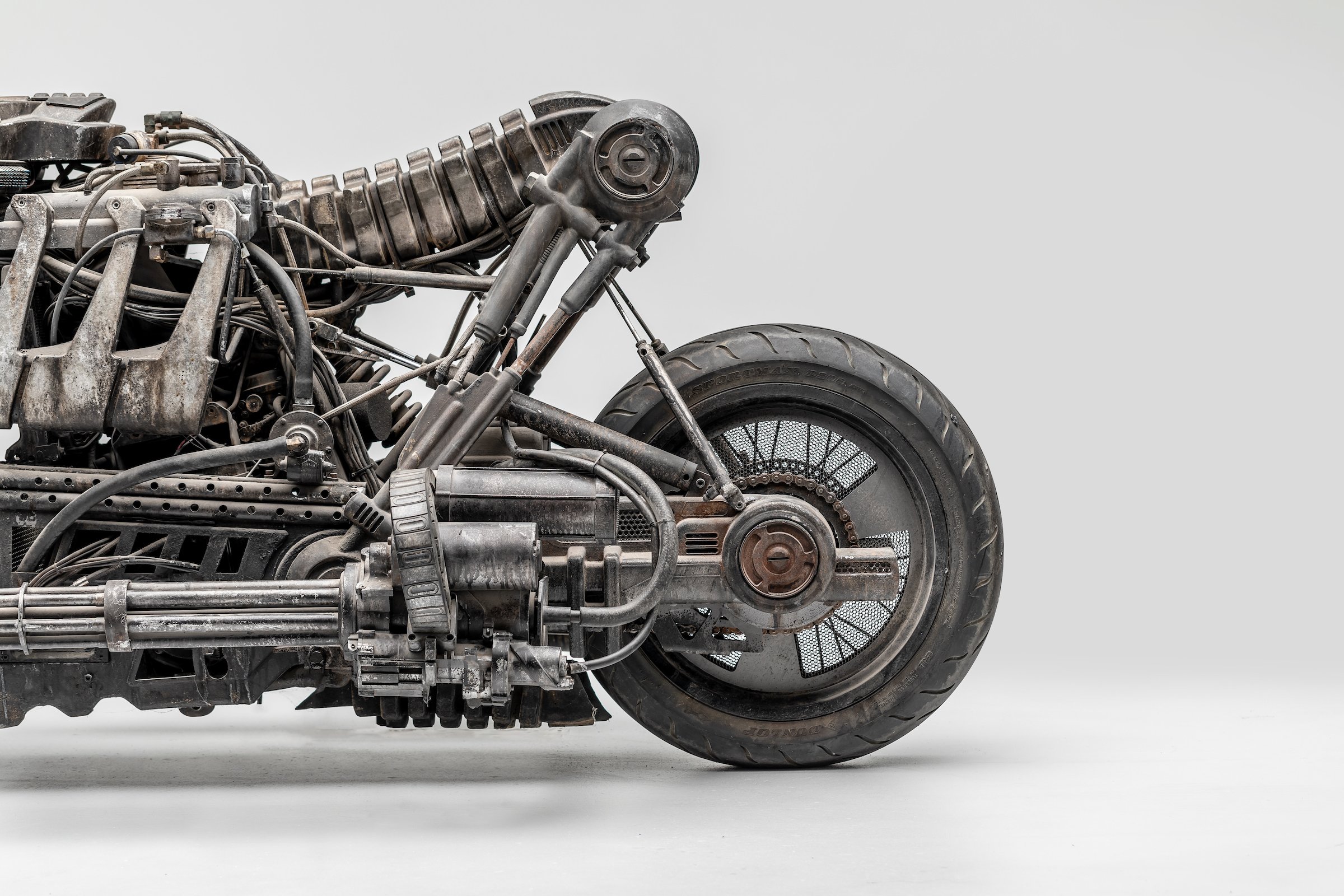