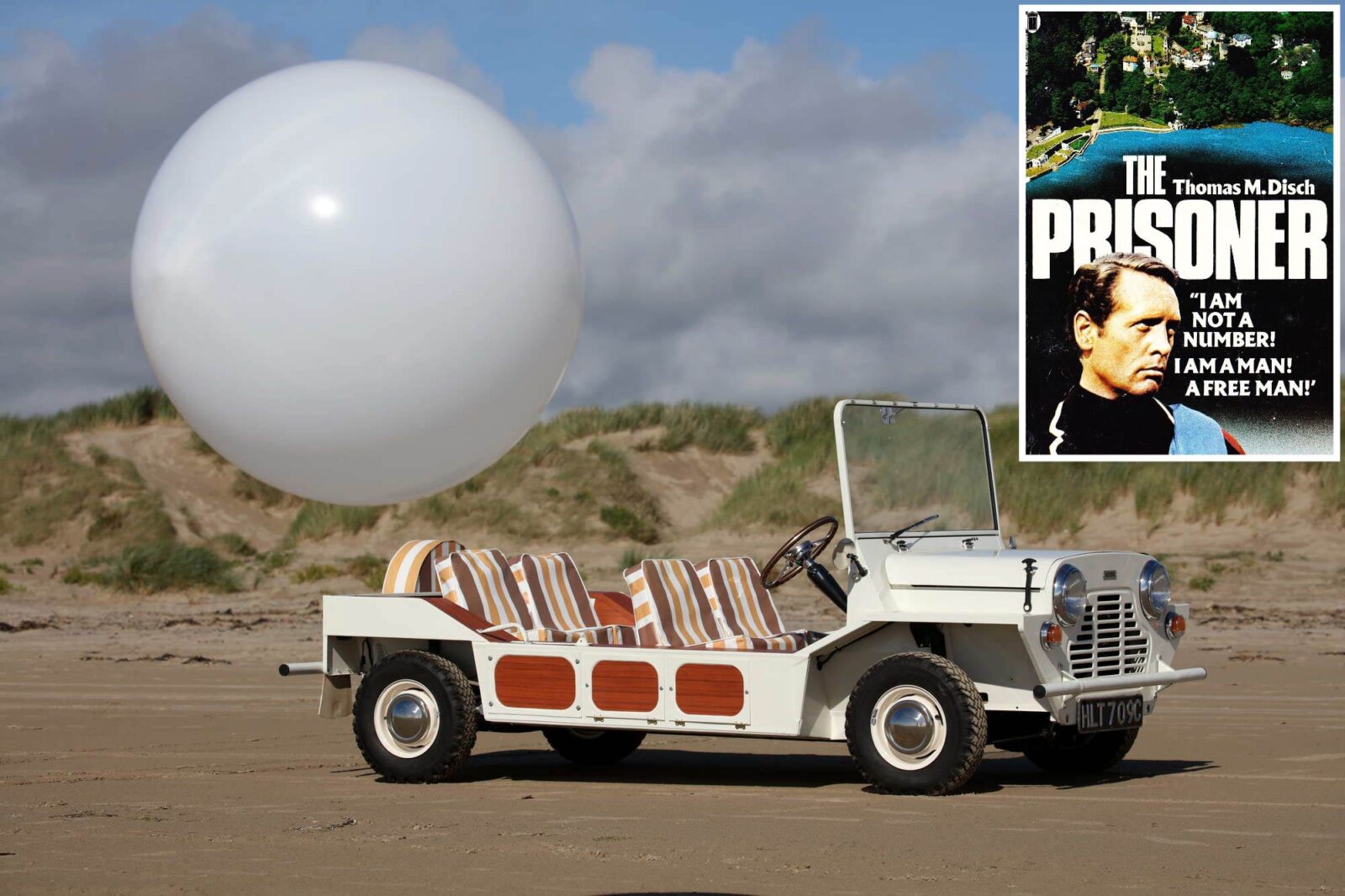 This is one of just two surviving Mini Mokes from the legendary British TV series The Prisoner, and it’s the only car for which there is direct evidence that it was used on screen – due to a mistake during filming that left its license plate briefly visible.

The Prisoner was a highly influential television series that blurred the lines between spy fiction, science fiction, and psychological drama. It originally aired in Britain in 1967 where it became an instant cult classic, followed by television releases in Canada, Australia, New Zealand, the United States, and other countries.

The Mini Moke, The Prisoner, and the Lotus Seven

The Prisoner is remembered today as an avant-garde social science fiction television series, it was filmed in the unusual village of Portmeirion in Wales.

Above Video: This is the full first episode of “The Prisoner,” the full series is available to watch here.

Lead actor Patrick McGoohan was also the co-creator and a writer on the series, which was created after his work on the popular 1960s television series Danger Man.

In The Prisoner McGoohan plays “Number 6,” all residents of the mysterious town are known only by their assigned numbers.

I won’t give too much away here as it’s a series that’s really worth watching if you haven’t seen it, however I can say that much of it centers around Number 6 trying to escape as Number 2 and other residents of the town try to get information out of him regarding his previous job in the intelligence service.

The Mini Mokes used during filming became an integral part of the series, as did the Lotus Seven that was famously used in the opening credits. The first episode of The Prisoner is available to watch for free on YouTube courtesy of Shout! Factory (see it above), and they have the rest of the episodes on their website.

Despite its significance to 1960s pop culture the screen-used Mini Moke you see pictured in the article ended up sitting in a barn in Holland plagued by rust after decades of neglect. 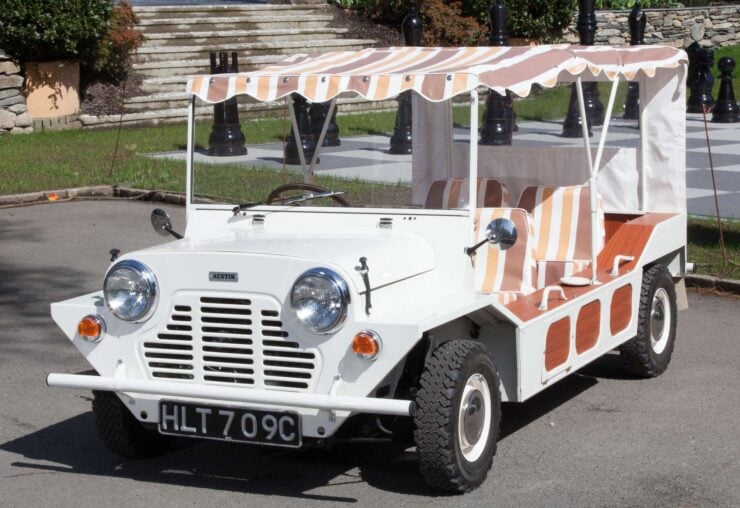 For those who have seen the original series, these eye-catching Mini Mokes are instantly recognizable.

Fortunately it was discovered by Mini Moke enthusiasts Phil Caunt and Jeremy Guy, who then began the two year process of restoring the car while keeping as many of the original parts as possible.

The engine and transmission rebuilt was fairly straightforward however the car’s steel unibody was been badly damaged by rust. Everything that could be saved of the original steel was, with the rest being replaced by new sections.

The Penny Farthing motif on the bonnet was kept, and new fabric was sourced to match the original.

Since its restoration was completed the car has been featured in both Mini World magazine and Classic & Sportscar magazine, the car also made a trip back to Portmeirion for the 50th anniversary of The Prisoner in 2017, Phil said:

“When I took the car back to The Village and drove it past those famous buildings, I really got the sense that it had come home.”

This unusual Moke is now due to cross the auction block with Silverstone Auctions on the 13th of November. At the rime of writing there is now price guide, you can click here to visit the listing. 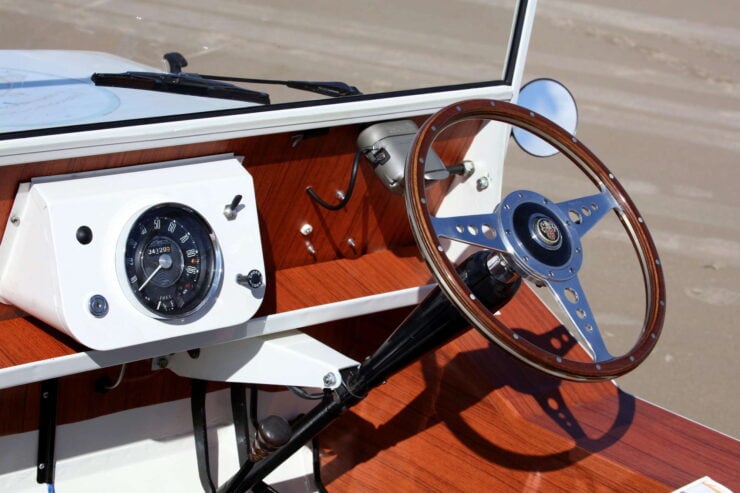 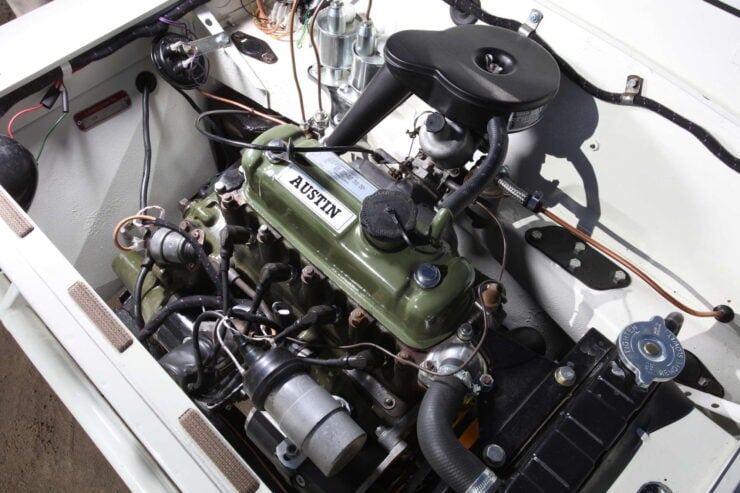 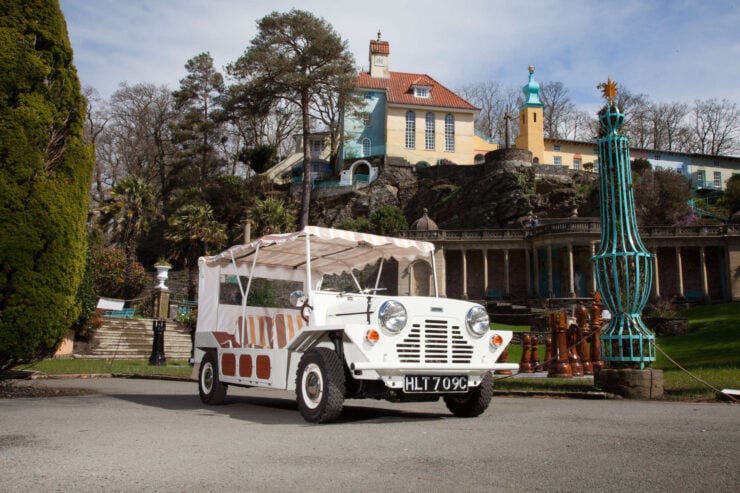 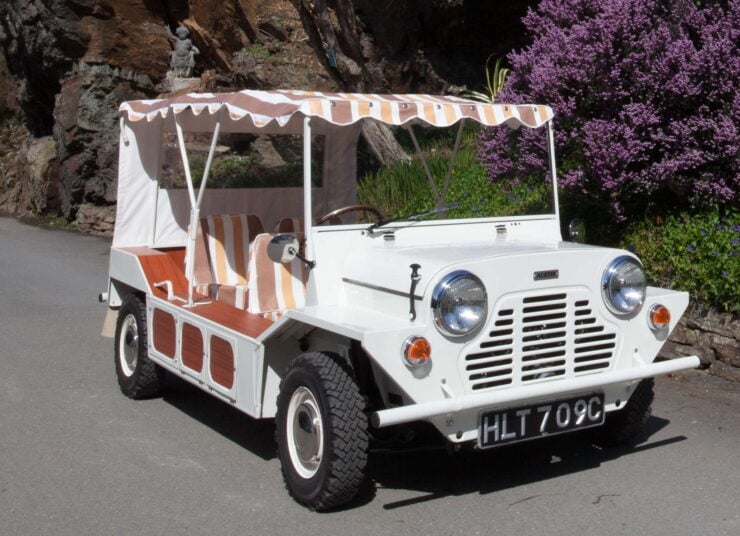 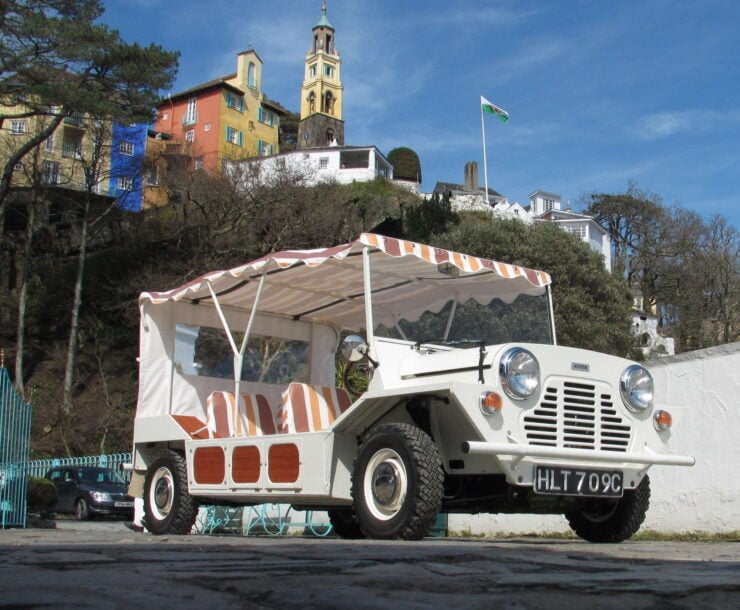 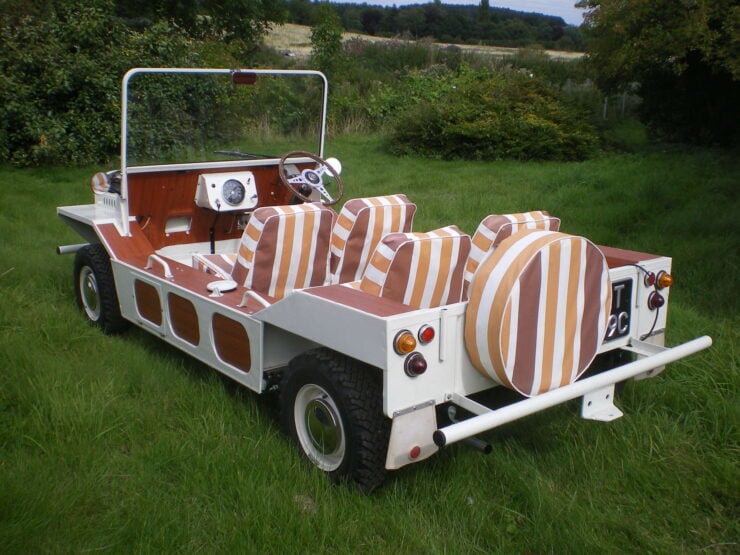 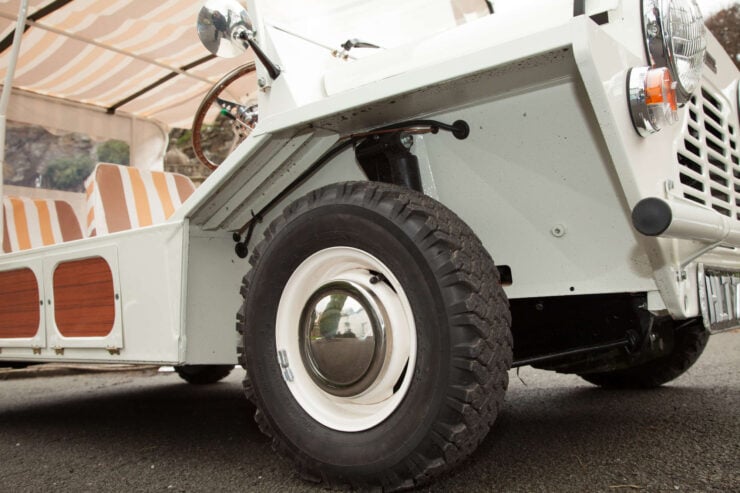 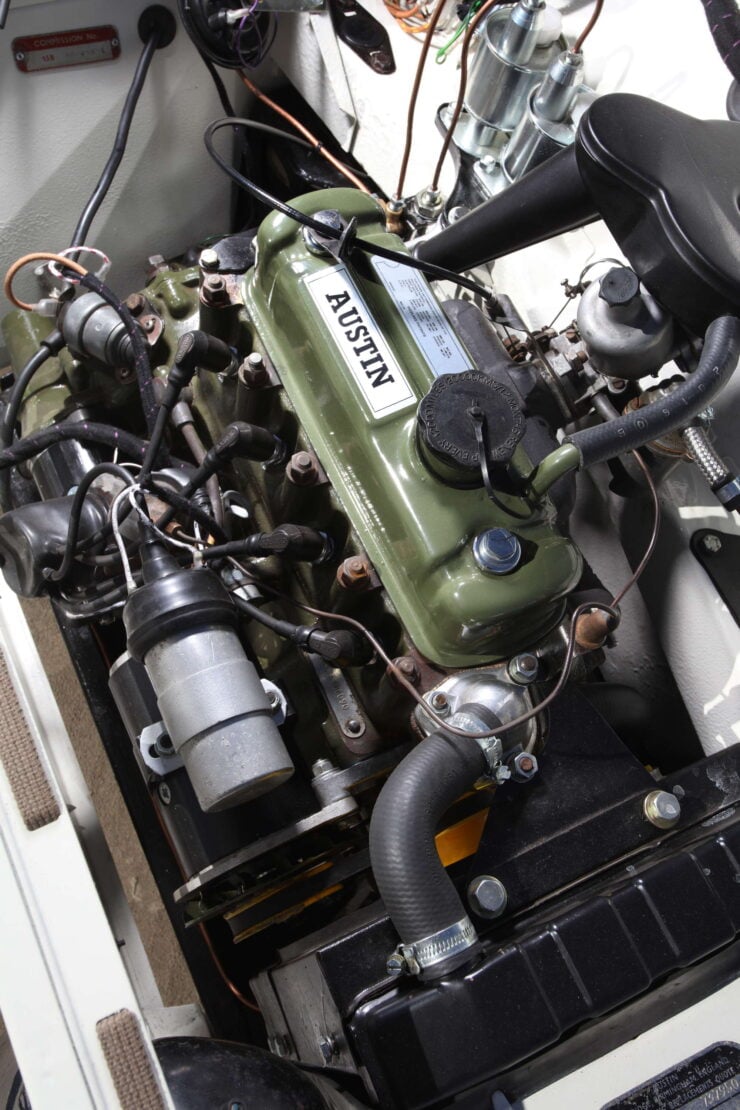 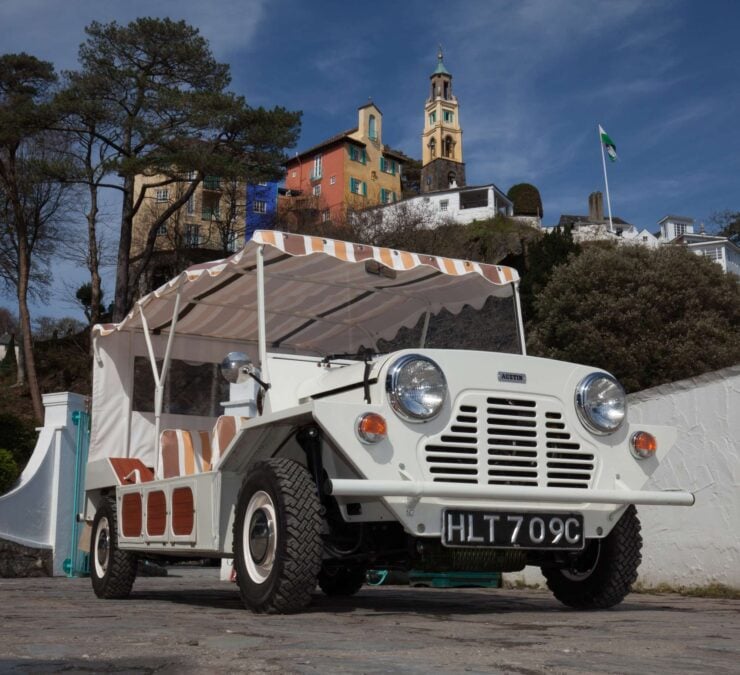 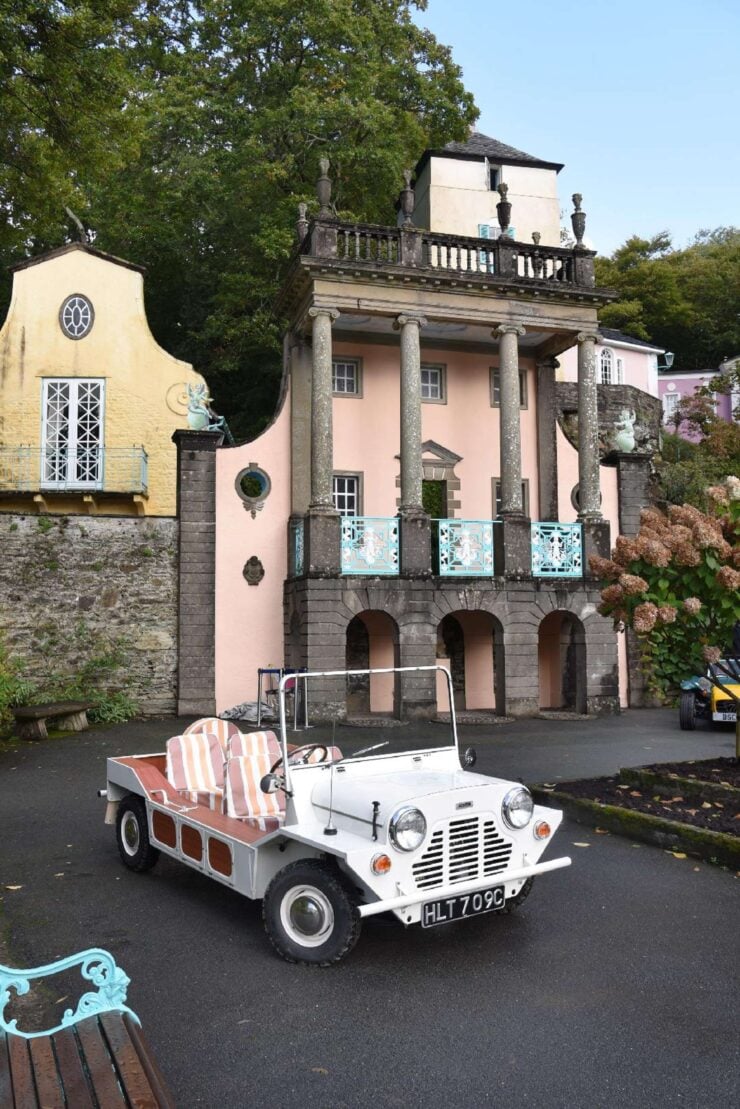