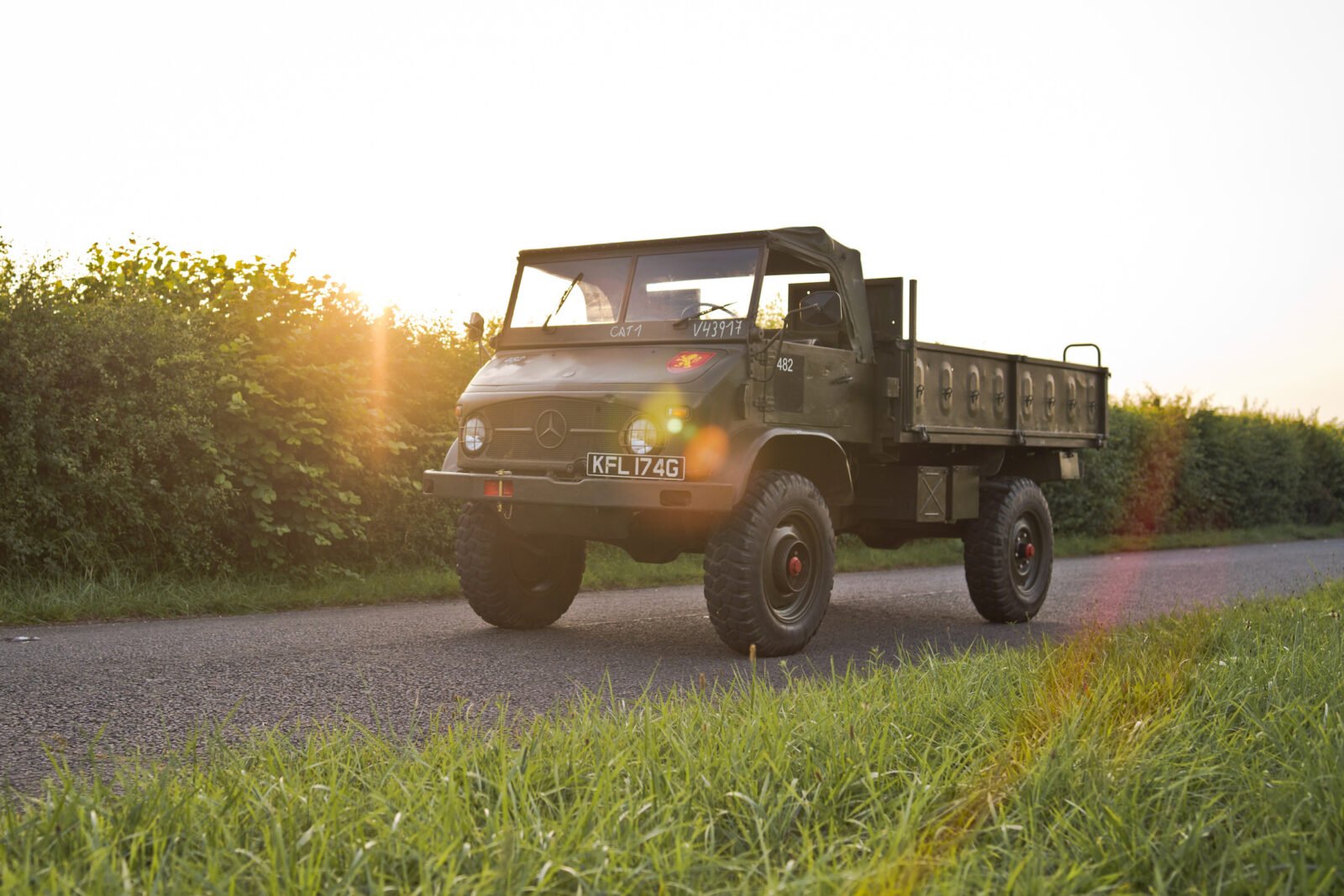 The Unimog 404 was the second major iteration of the legendary German off-roader named by taking the letters from three words – UNIversal MOtor Gerät, or “universal power unit” in German.

In the years shortly after WWII many engineers at automakers around the world were seeking to build a vehicle that could function as both a farm tractor and a road vehicle. The Unimog was specifically developed so that a farmer could use it primarily as a tractor with front and rear power takeoffs, but also use it to transport a significant load of vegetables to market for sale.

The British Land Rover was built with much the same intention, as was the American Dodge Power Wagon, the latter of which was originally a load-carrying 4×4 truck used extensively during the war. 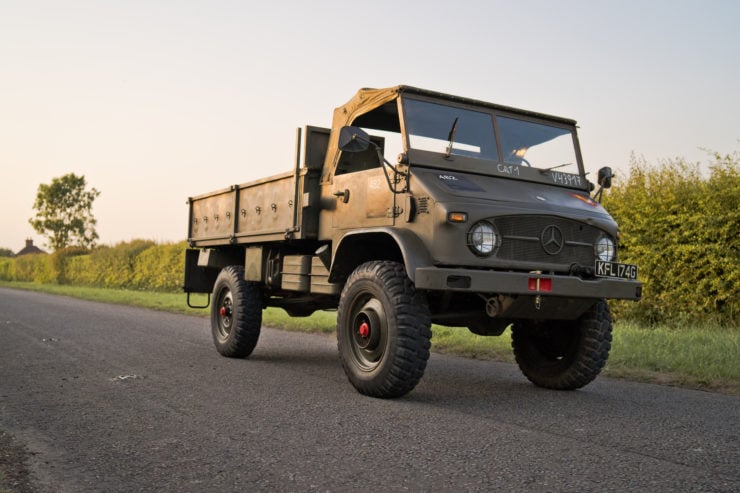 The project to develop the first Unimog prototype was led by Albert Friedrich, the former Chief Engineer of Daimler-Benz’s highly-regarded aircraft engine research division,  the project began in December 1945 just three months after the end of the war.

The basic architecture of the Unimog has changed little in the 60+ years since the first iterations were developed. A flexible chassis is used to increase wheel articulation, live axles are fitted front and rear using portal gears to increase the height of the axle and differential to provide class-leading ground clearance, a cab is fitted up front with a minimal hood over the front mounted engine.

The Unimog 404 was the most prolific of all the Unimog models, it was used extensively by militaries around the world as well as by rescue teams, forestry agencies, rangers, amateur off-roaders, overland adventurers, and even Paris Dakar Rally competitors.

Today the Unimog 404 is the most common model to find listed for sale, and there’s a large global network of enthusiasts and parts suppliers that do a great job of keeping them on the road. 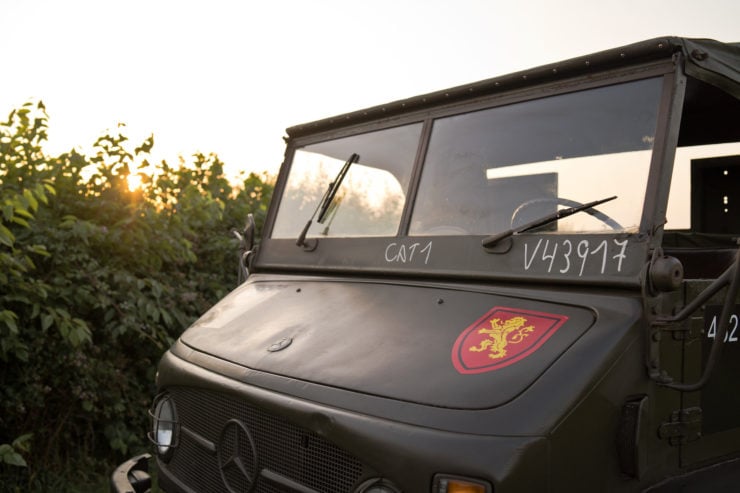 The vehicle you see here is a 1968 Mercedes-Benz Unimog 404 that was originally issued to the German Bundeswehr, the unified armed forces of Germany, where it was used as a military transport.

This is the U82 variant of the Unimog 404.1, so it’s a longer wheel base model fitted with a 2.2 litre M180 straight-6 petrol/gasoline engine and an off-road specific Zenith carburettor, coupled to a manual gearbox with six forward gears and two reverse gears. 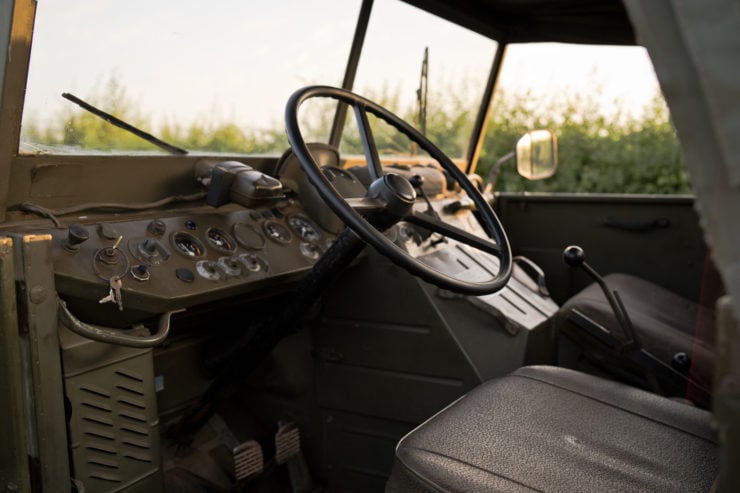 The odometer on this 404.1 is showing just 2,520 kms or 1,565 miles, which is believed to be original. The over all condition of the vehicle appears to be excellent and it still carries its Bundeswehr green paint work and military shield from its time in service.

This Unimog has a folding canvas roof with option door toppers for use in winter, there’s also a frame and canvas cover for the rear load bay. The wooden floor in the rear tray is original, and it’s fitted with two rows of folding seats for taking passengers on off-road excursions

The drivetrain is listed as being in very good order, having had a light mechanical restoration when the vehicle was imported and licensed for road use in the United Kingdom. If you’d like to read more about this Unimog or register to bid on it, you can click here to visit the listing on Collecting Cars. 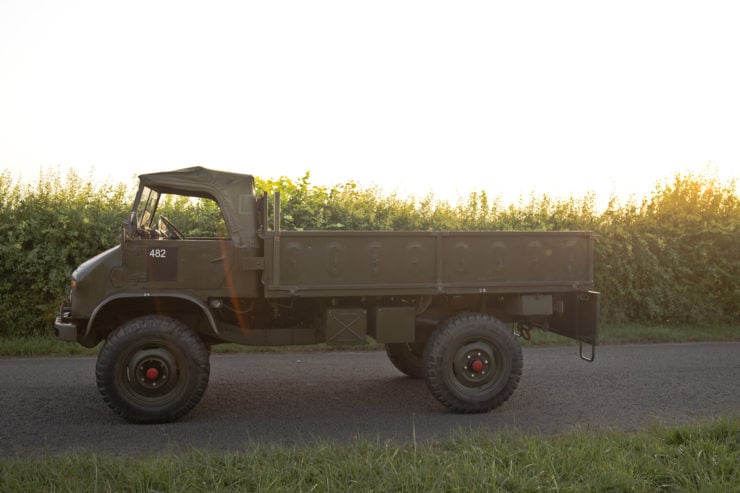 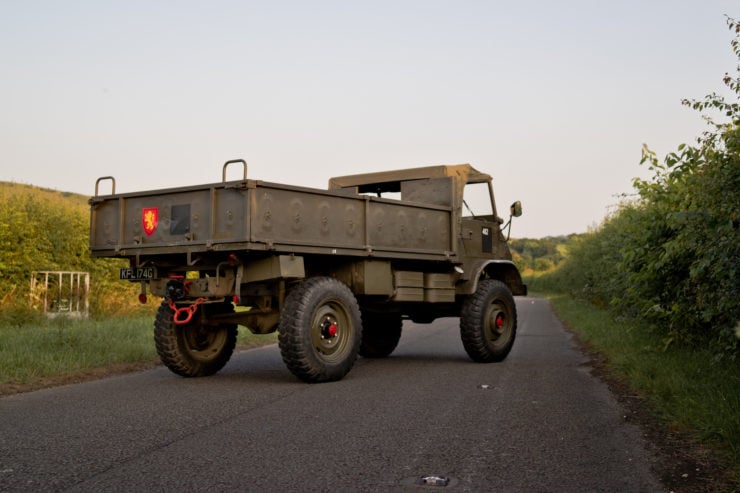 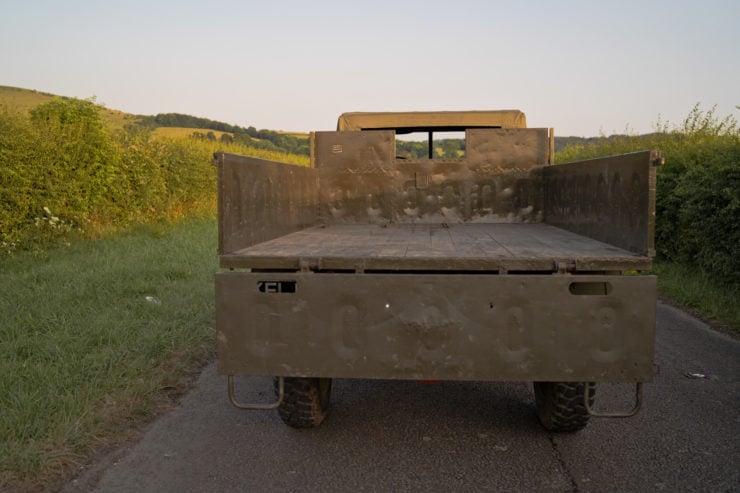 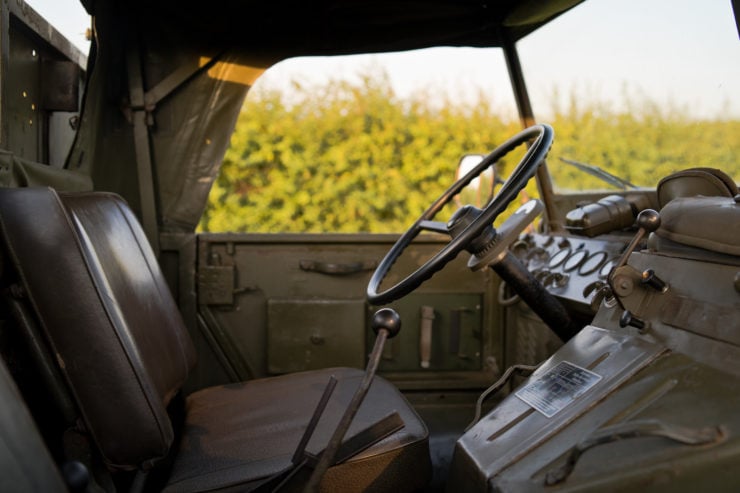 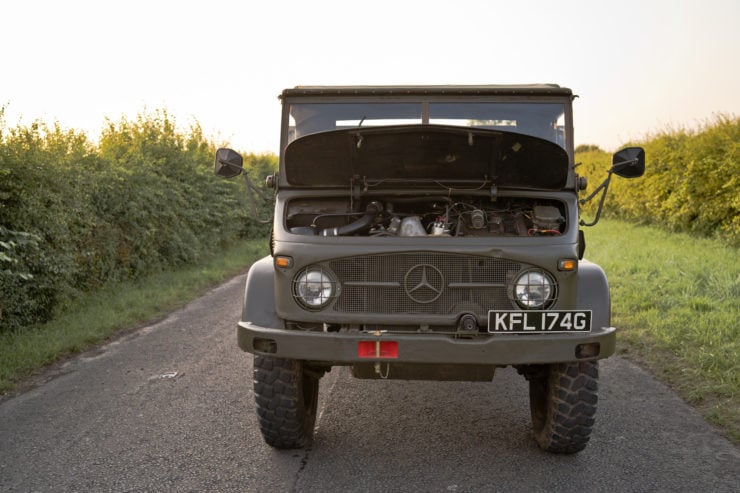 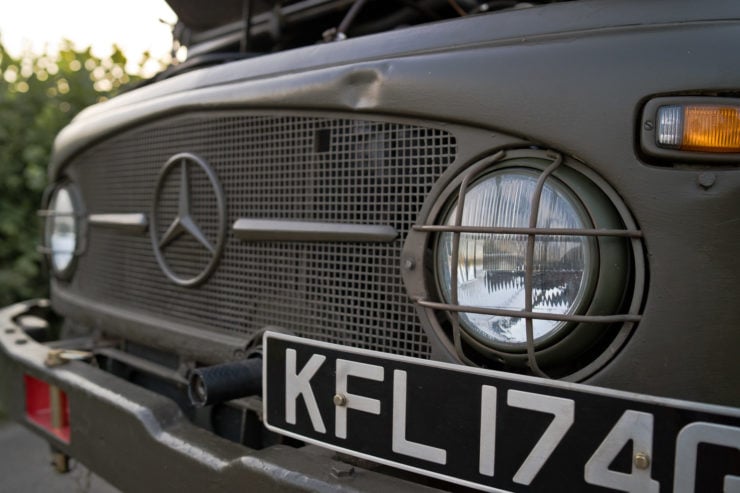 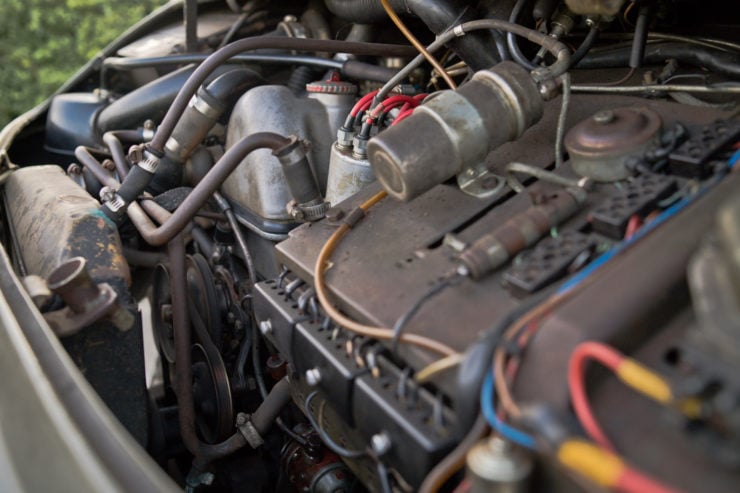 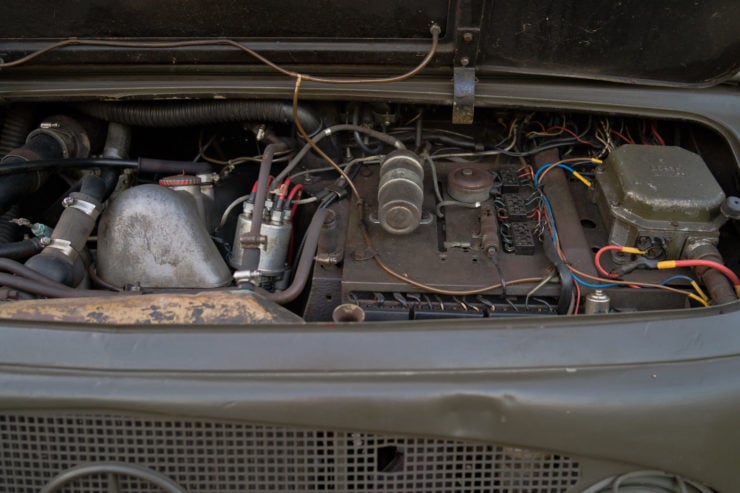 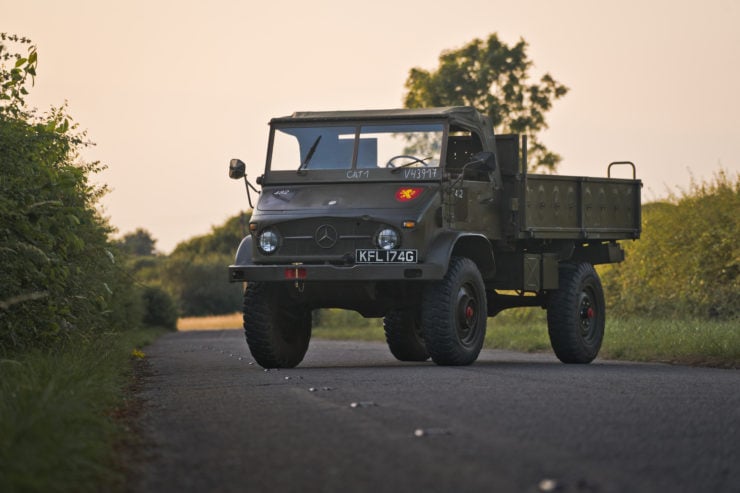 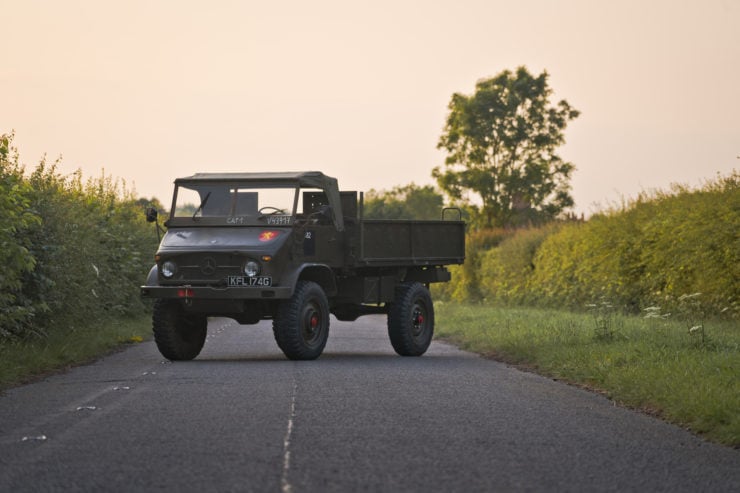 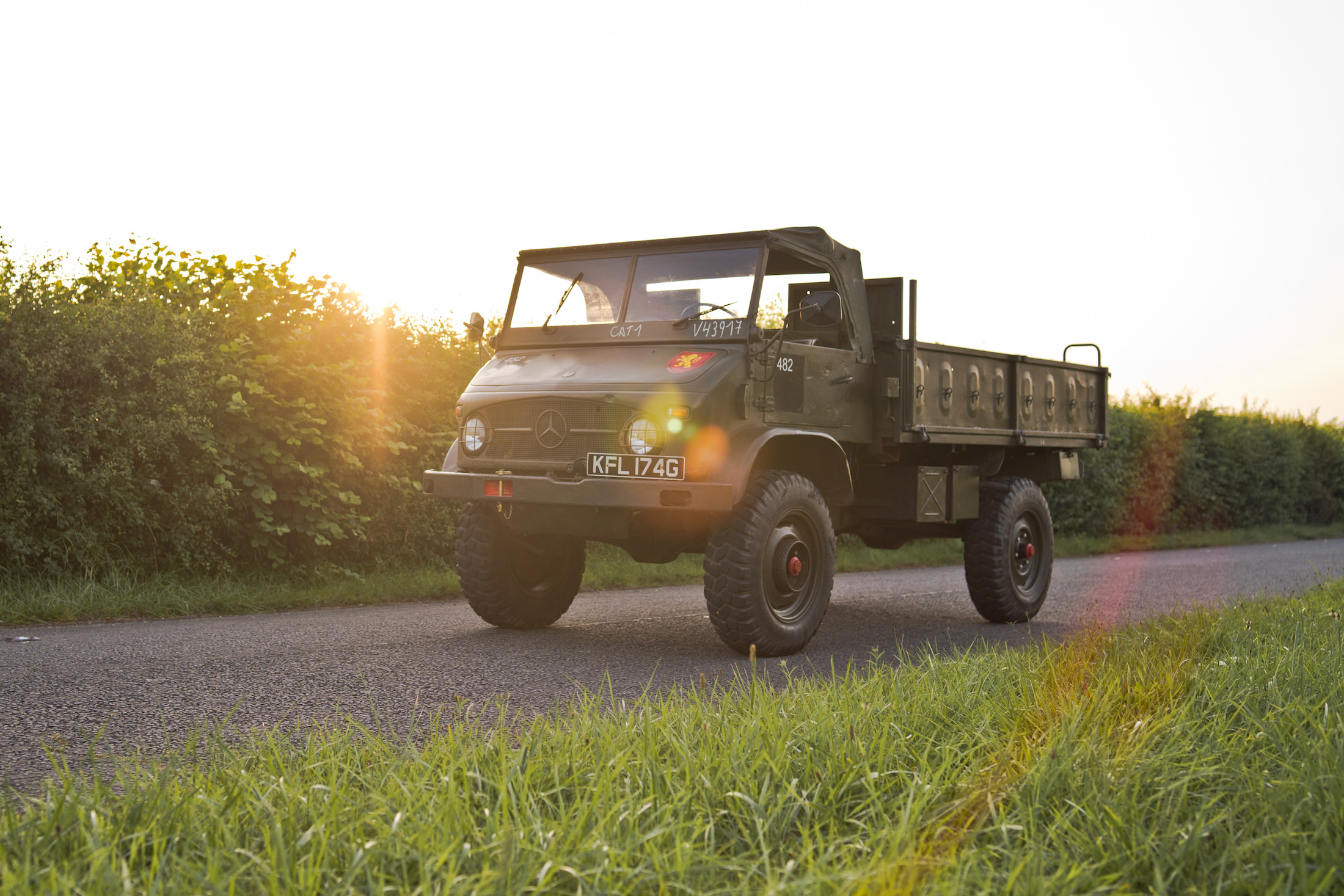