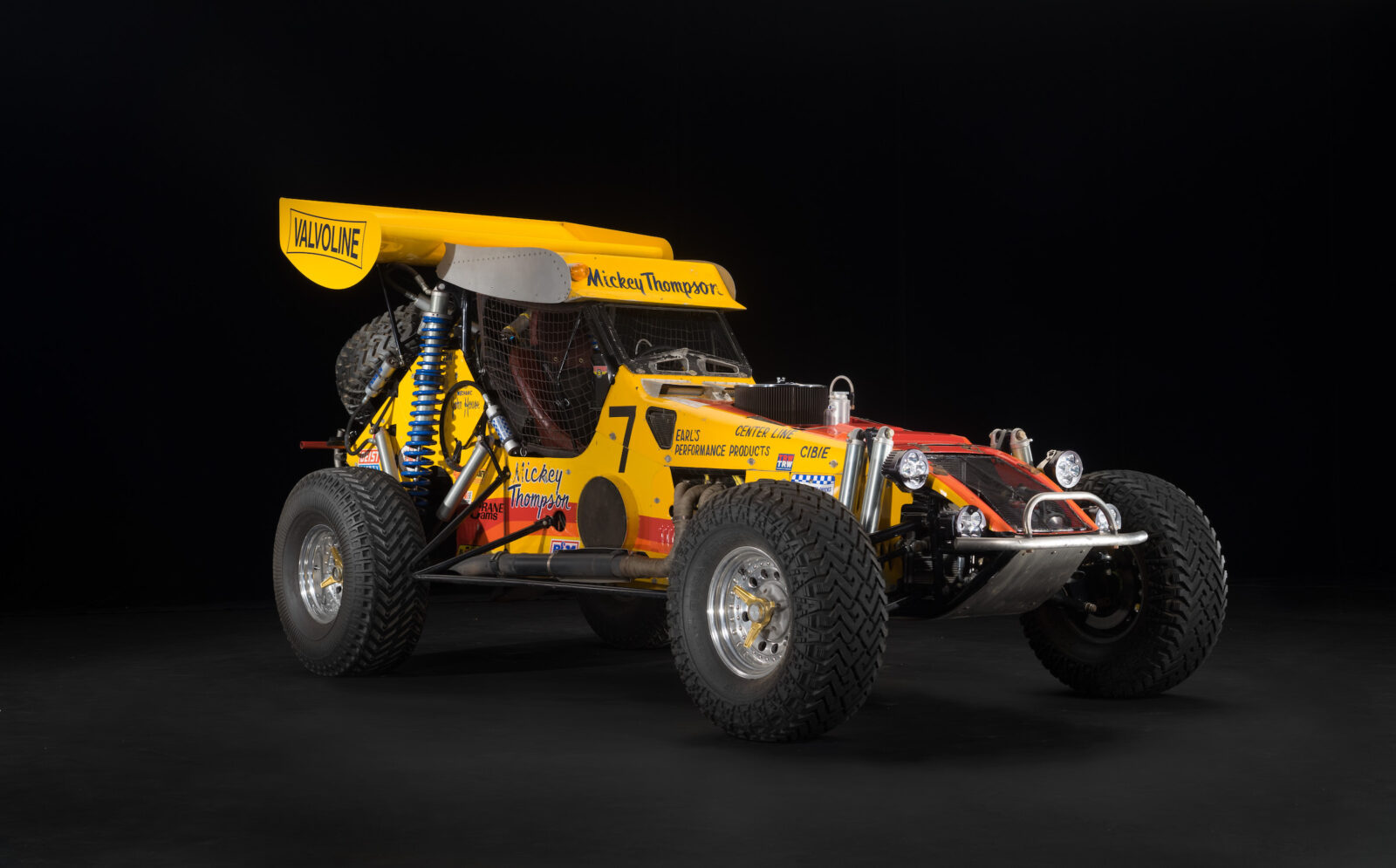 This article was written by Rory Ward, the man who restored the Challenger IV back to racing condition and then took it back to the desert to contest the brutal Mint 400 desert race.  Challenger IV is now for sale and you can contact Rory via his website here if you’re interested.

In 1977 Mickey Thompson (MT) set out to build one of the most technically advanced off road race vehicles ever created. While the fastest off road cars on the dirt (at the time) were Class 1 Unlimited Buggies based off of VW suspension, with a whopping 10 to 12″ of wheel travel, and 2276cc VW motors, Mickey decided to “Super Size” his ride with an American V8 and 15 to 18″ of wheel travel.

Mickey started with a chassis (known as Challenger IV or CH4) built by Smokey Allerman, who was famous for building sprint cars back then. The car looked a lot like a sprint car but the suspension was altered to get more wheel travel out of it with custom built A-arms and a 3 link rear suspension arrangement.

While the chassis was built by Allerman, Mickey had John House (MT’s crew chief), son Danny Thompson, and Bruce Parrish finish the racer and drop in a 383 stroker Chevrolet V8 engine pulled from one of his old Indy cars, along with a 2 speed Powerglide automatic transmission.

One of the biggest and most talked about items on this car when it debuted at the 1978 Mexicali 250 was the size of the rear shock absorbers. Each shock was 3″ in diameter and 41″ long. There was nothing like it in the off road racing industry at that time and it took until the mid to late 1980’s for that shock technology to really take off. A 3.0 shock is standard today on just about any off road racing vehicle but not back in 1978. 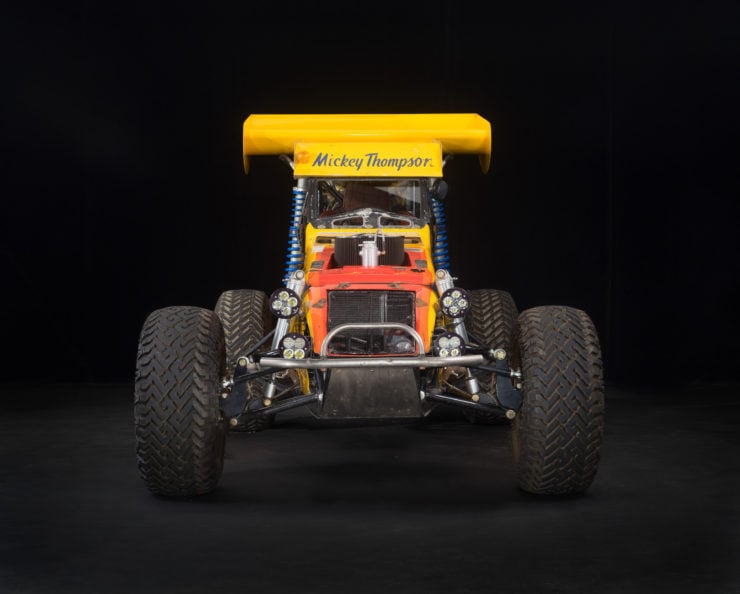 Right out of the box this car was turning heads. The competition could not believe that this overweight, big, and bulky buggy could out manoeuvre and out power their lightweight buggies that had been dominating the deserts from the inception of the sport.

Well, MT had them all talking and scratching their heads. That first event in 1978 saw Challenger IV leading the race and doing it impressively until a drive line problem catapulted the car into the air and rolled out of contention. The car was rumored to run 150 mph on the highway sections but made MT nervous because the car was all over the place and needed to be stabilized.

At the next race, the 1978 Mint 400, Challenger IV’s wheelbase was lengthened 8″ to 110″ to help with the stability. MT started 24th off the line and after the first 100 mile lap (of 4) he was leading overall by 10 minutes. At that time Challenger IV had recorded the fastest lap ever recorded at the Mint 400 and was on his way to the win but got tangled up with slower traffic in the dust and put an end to his run.

This was the story of Mickey Thompson, always a front runner but could never have a clean enough run to win a race. People said he was way too hard on equipment and if he would just slow down a little he would probably be way more successful. That was not MT’s style, it was “checkers or wreckers” and when asked why he didn’t just slow down a little he responded with “It just doesn’t feel right to slow down”. 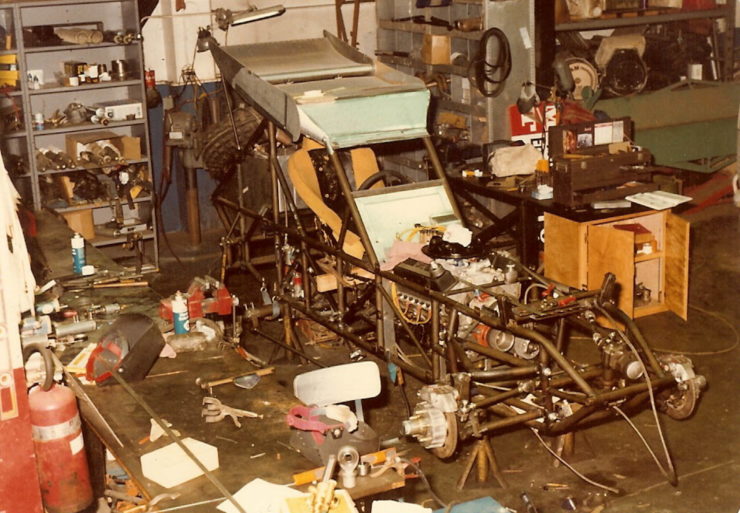 After a few seasons of hard luck and near misses, CH4 was retired for the new and improved Challenger V that debuted in mid 1980. Some parts were scavenged off of CH4 to use on the new car and there it sat in the shop, on jack stands, alone…..until that dreadful day in March of 1988 when Mickey and wife Trudy were brutally murdered outside their California home.

A year or so later the cars were split up between family members and Challenger IV went up to Eugene Oregon at his daughters shop with a few more cars and sat. It wasn’t until 2011 when I found a picture of CH4 sitting in a loft on the internet.

After some investigating I was able to track down the person who took the photo and a link to a website. From there I was able to get in touch with Lyndy Thompson (MT’s daughter). I wanted CH4 but Lyndy wasn’t giving it up that easy. It wasn’t about the money, she wanted to know what the plans were for this historical vehicle. After a couple of phone “interviews” Lyndy and Rory agreed upon a price and CH4 was off to its new home and a restoration. 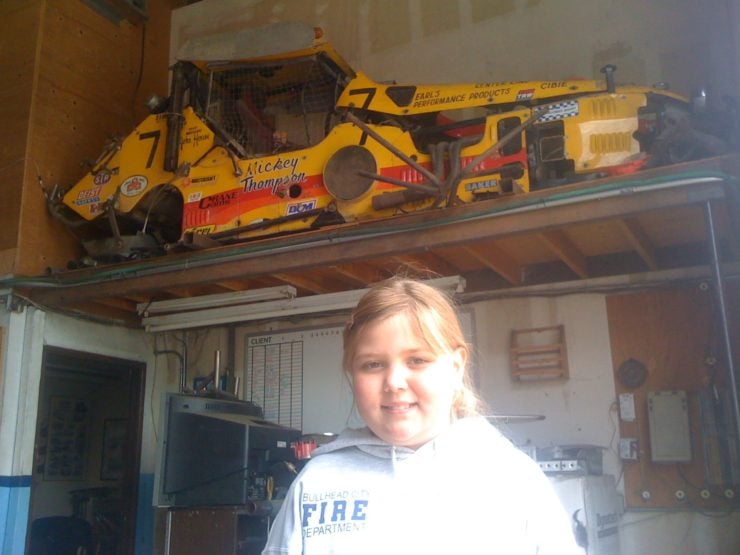 Three years later in 2015, CH4 was completed and ready to be raced at the recently resurrected NORRA Mexican 1000 which was billed as a vintage off road race. CH4 did as expected, running up front, surprising a lot of people and then broken down on the side of the road about 600 miles into a 1000 mile race, and then immediately retired….again.

In 2016, CH4 was once again pulled out of retirement and decided to give it one more try at the Mint 400. Mickey Thompson Tires jumped onboard with sponsorship and set out to try and make MT proud. CH4 was running great and with 5 miles to go from the finish the racer coughed and came to a halt. ARE YOU KIDDING ME?!?!? NOW?!?!? REALLY?!?!!?

Seems there was an air pocket in the fuel system when they fueled the car during the pit and the tank did not get fully topped off. Luckily Rory was able to get 5 gallons of gas delivered by his pit crew out on the course and won 1st place in the Vintage Class at the Mint 400.

Challenger IV now sits quietly at the Off Road Motorsports Hall Of Fame Museum at the Terrible’s Casino in Jean Nevada. If you ever want to see this impressive machine in person that’s where it will be for the next 12 months.

This article was written by Rory Ward, the man who restored the Challenger IV back to racing condition and then took it back to the desert to contest the brutal Mint 400 desert race.  Challenger IV is now for sale and you can contact Rory via his website here if you’re interested.

Editor’s Note: The next Mint 400 is due to take place in March 2020 just outside Las Vegas, Nevada. The event is billed as “The Great American Off-Road Race” and every fan of racing should really try to attend at least once, if you’d like to read more about it or read the 2020 Spectator Guide you can click here. 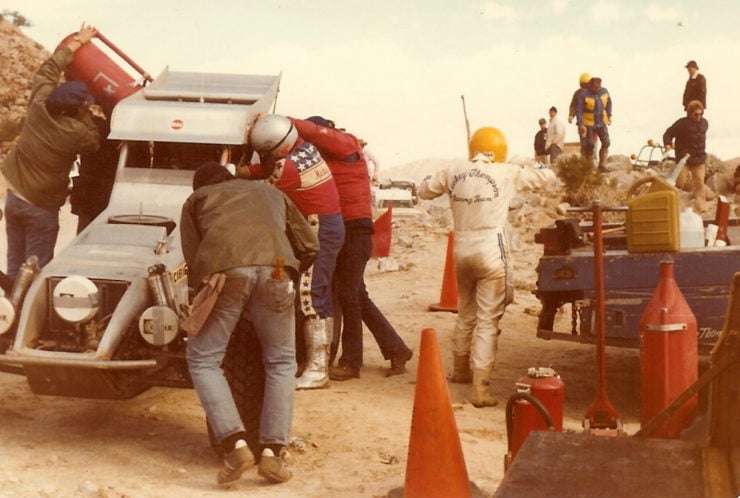 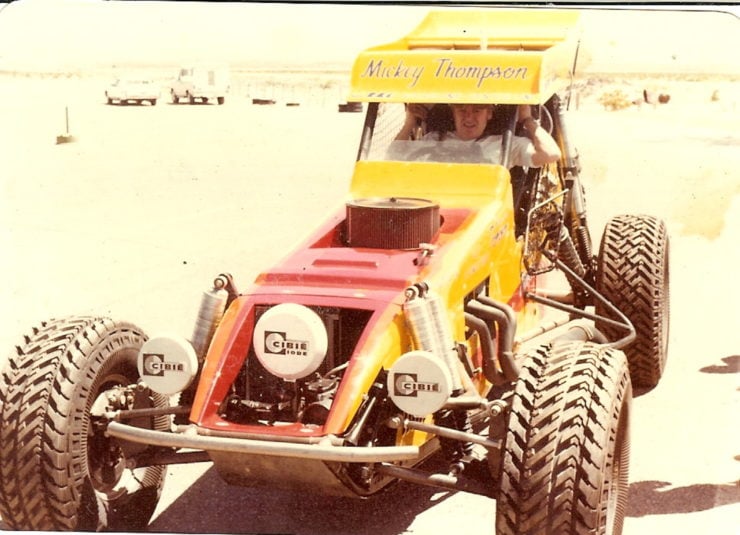 Mickey Thompson strapping himself in Challenger IV during testing prior to the 1978 Mint 400 after adding 8″ to the wheelbase to the car after crash – Photo credit Bruce Parrish. 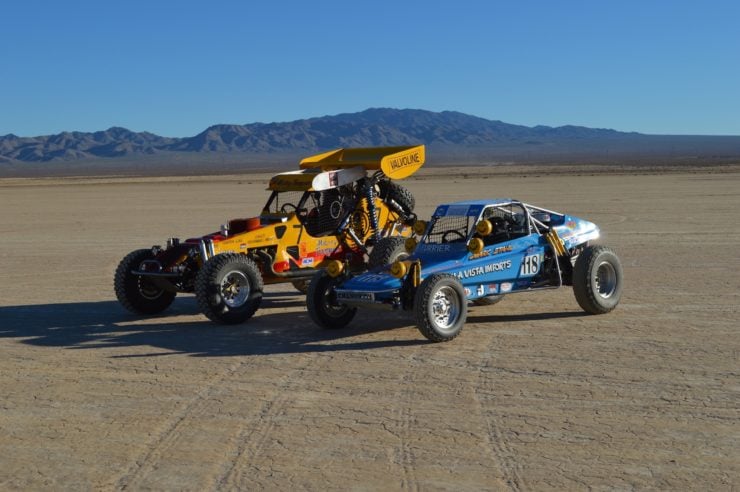 2015 Mint 400 photo shoot with the Mark Stahl Chenowth. These two cars competed in the same class together with the Mark Stahl car being the “standard” type Class 1 cars back in the day. Look how much bigger Challenger IV is compared to the buggy – Photo credit Jeff Furrier. 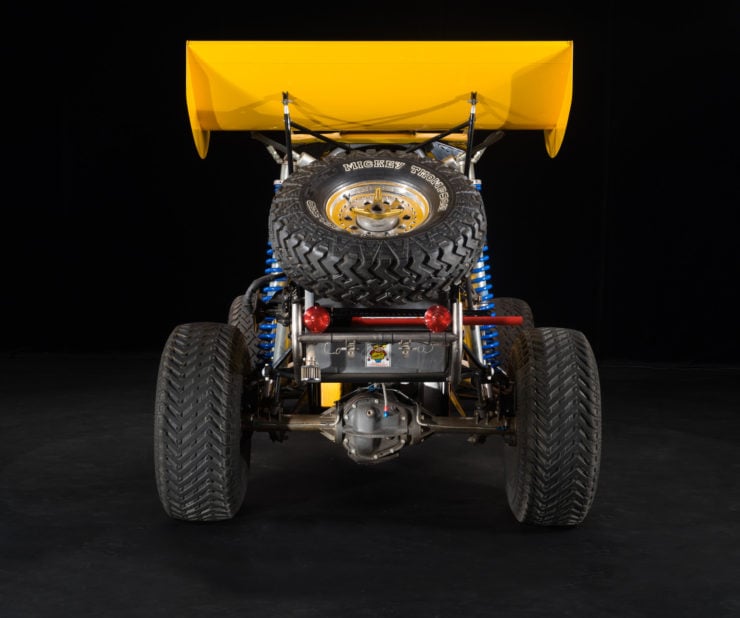 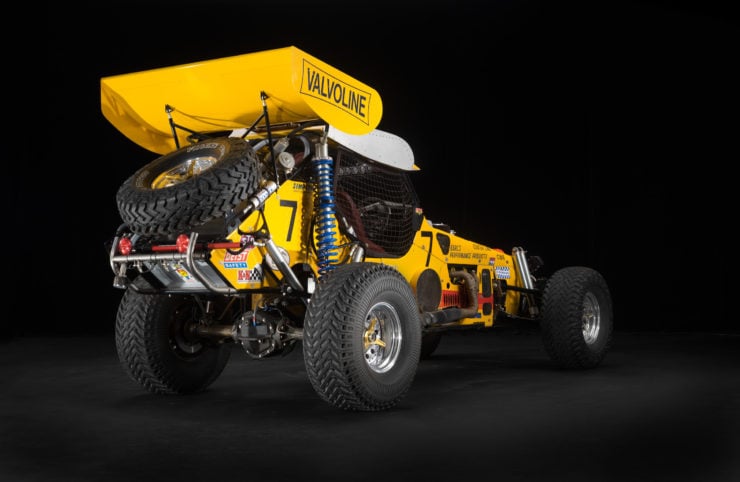 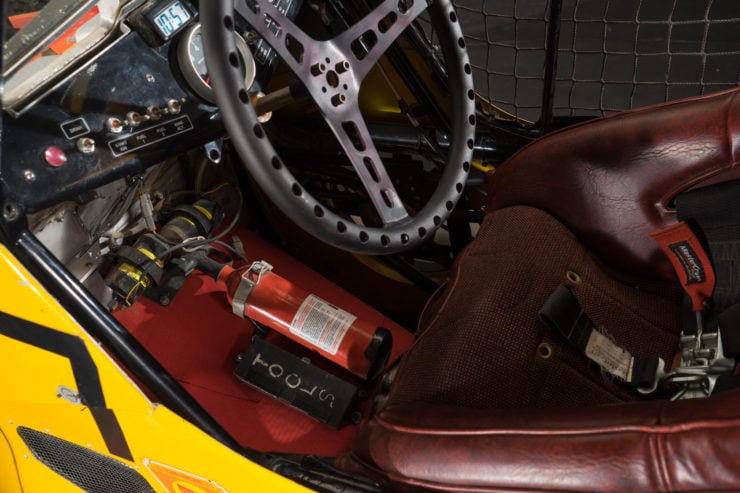 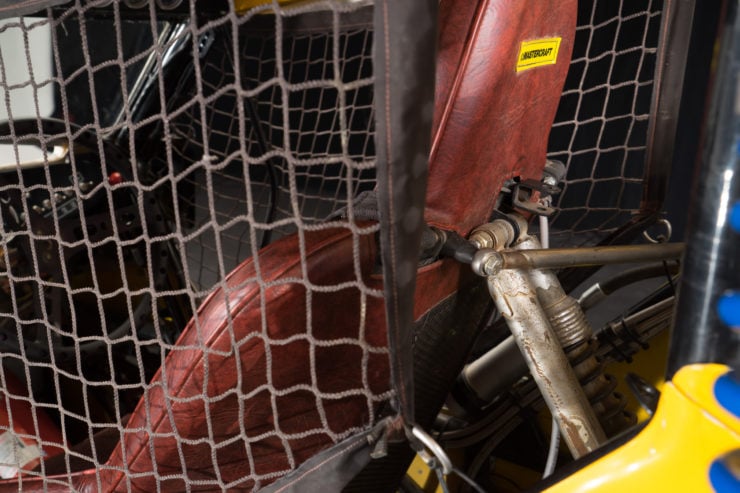 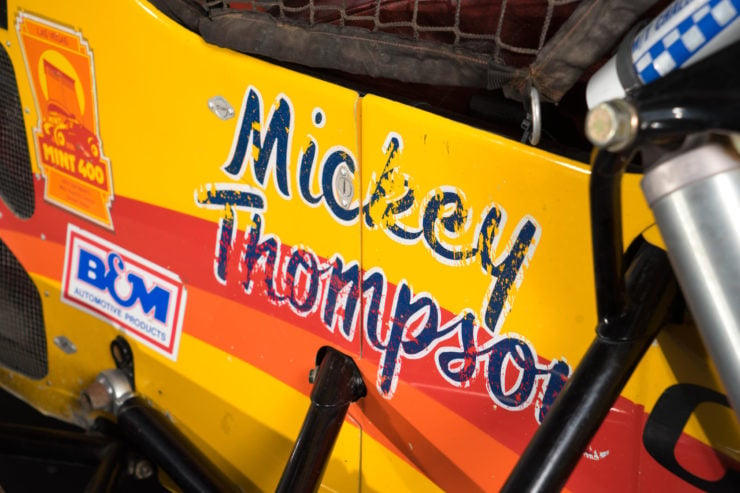 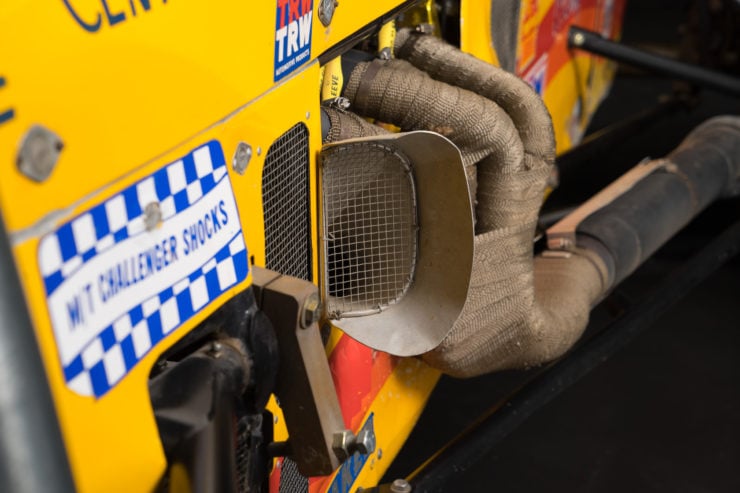 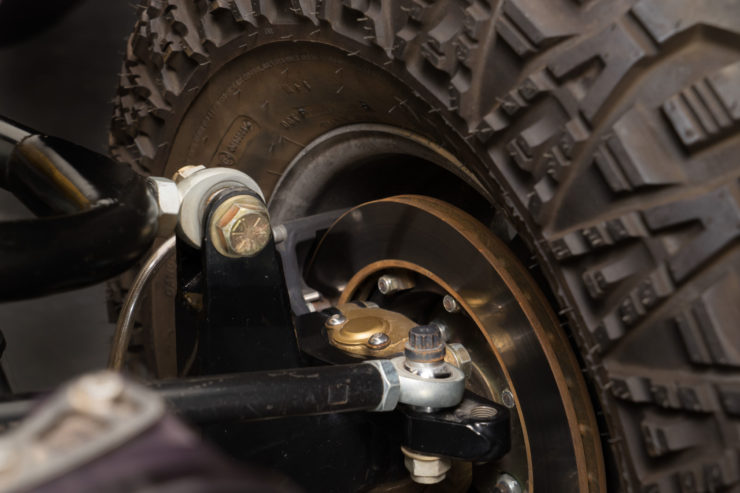 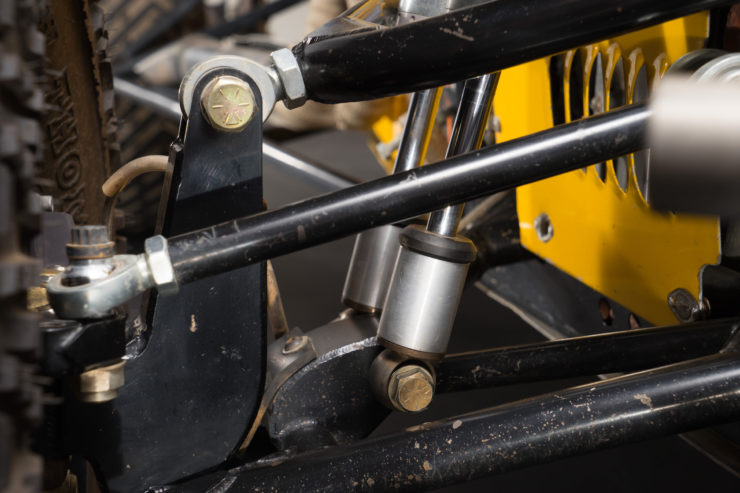 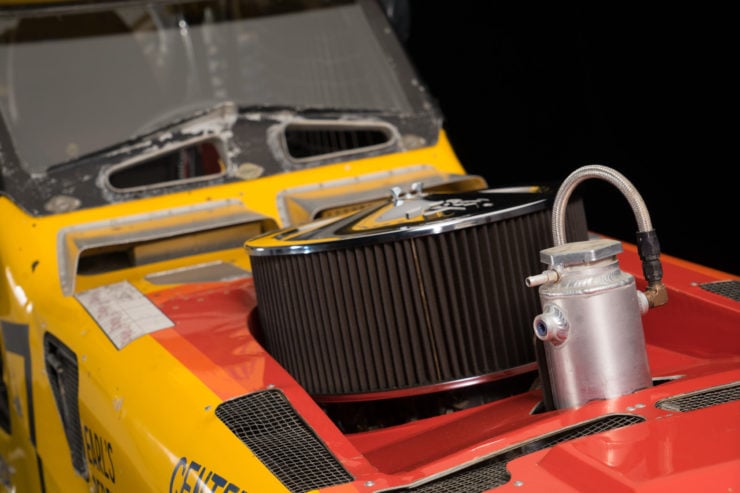 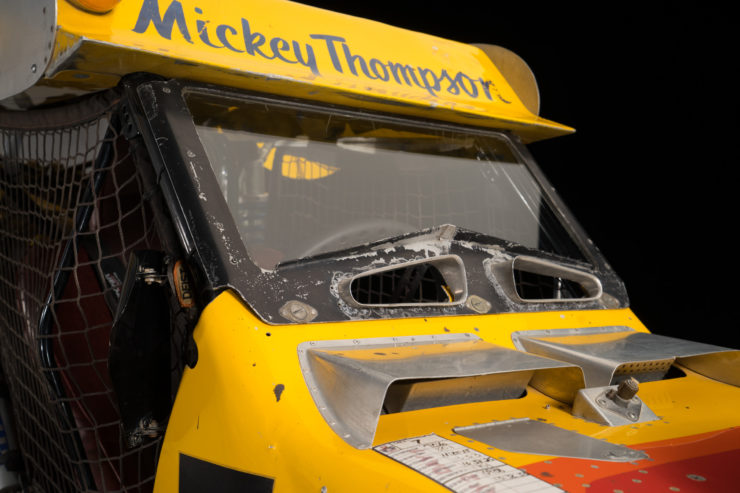 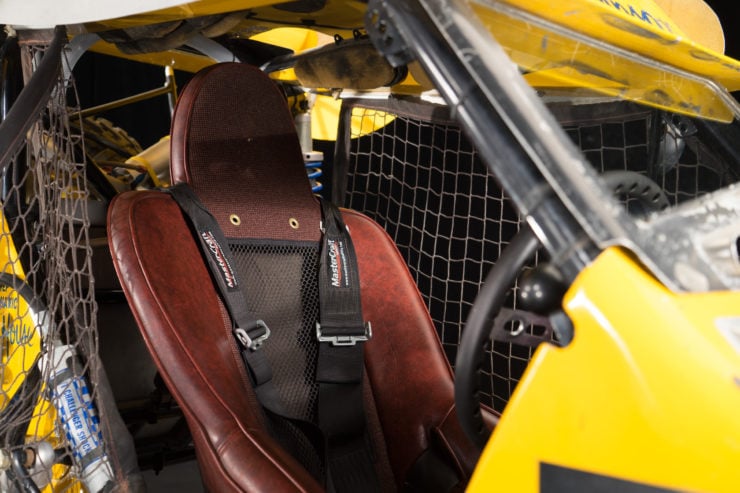 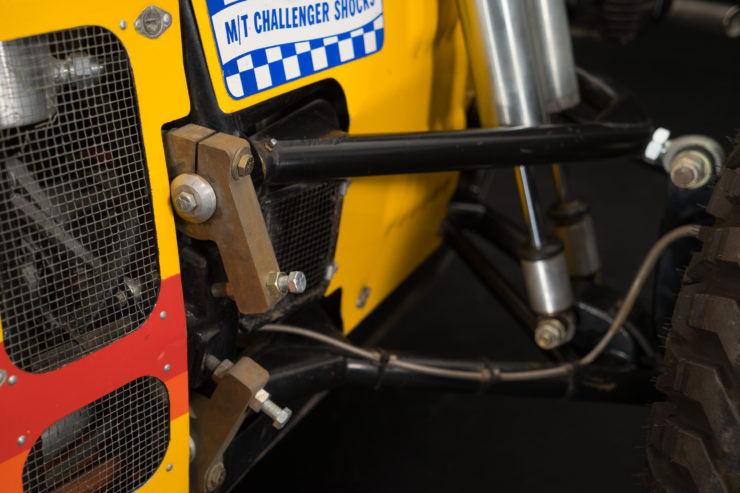 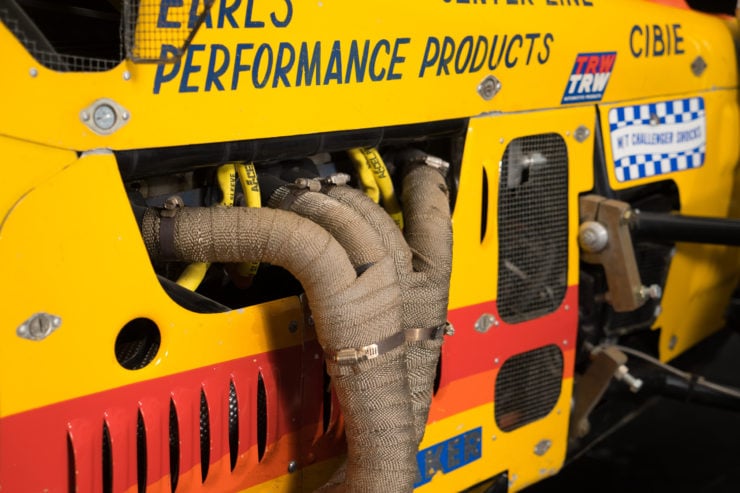 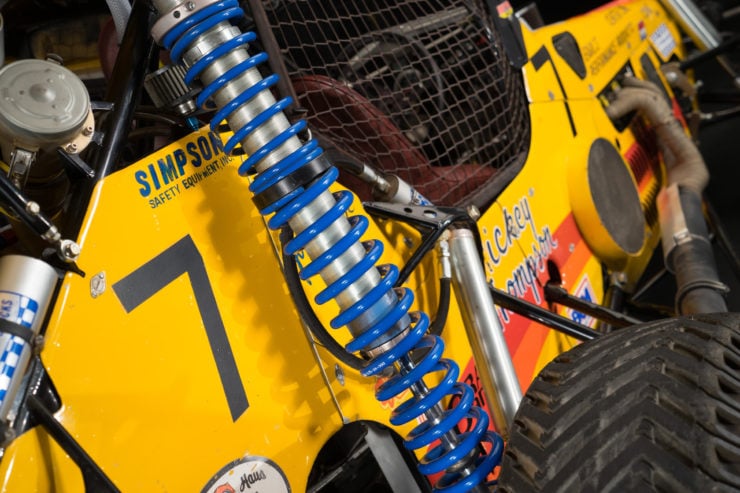 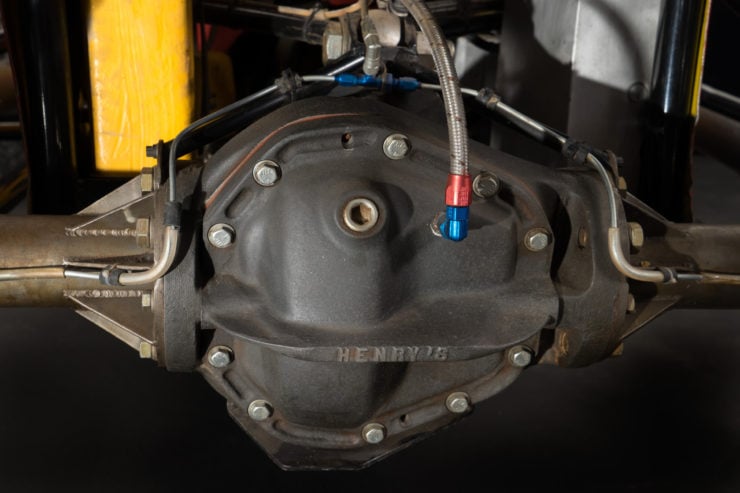 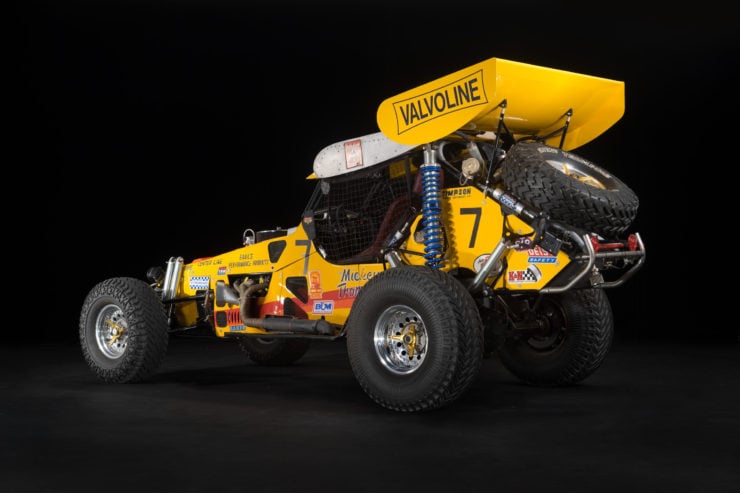 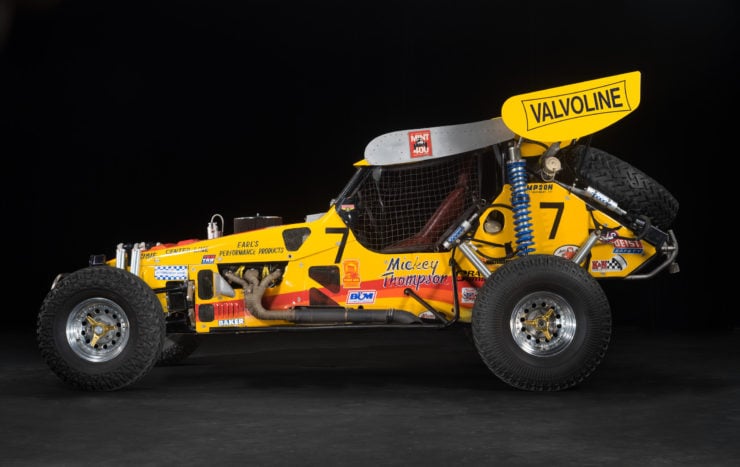 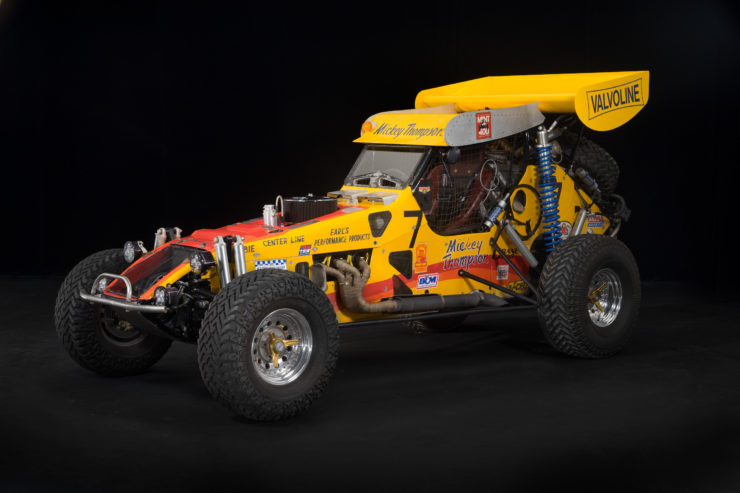 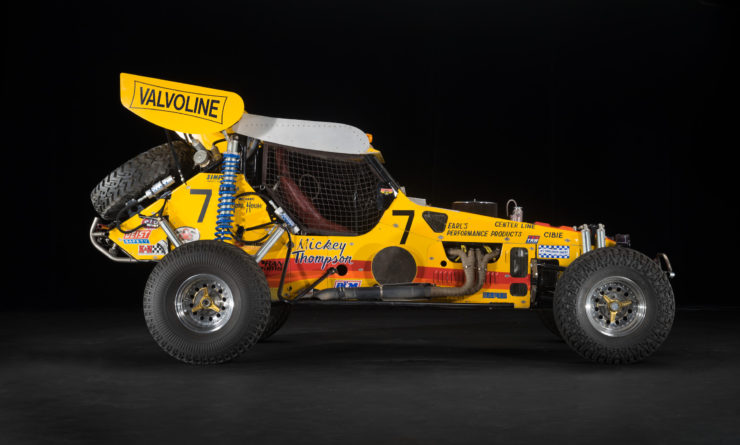 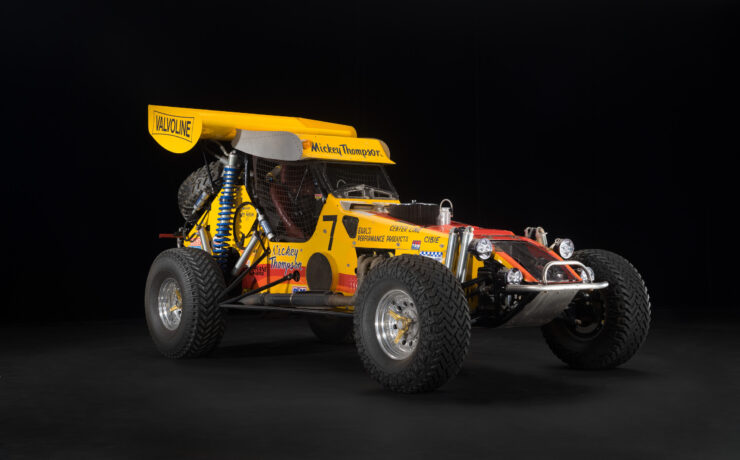 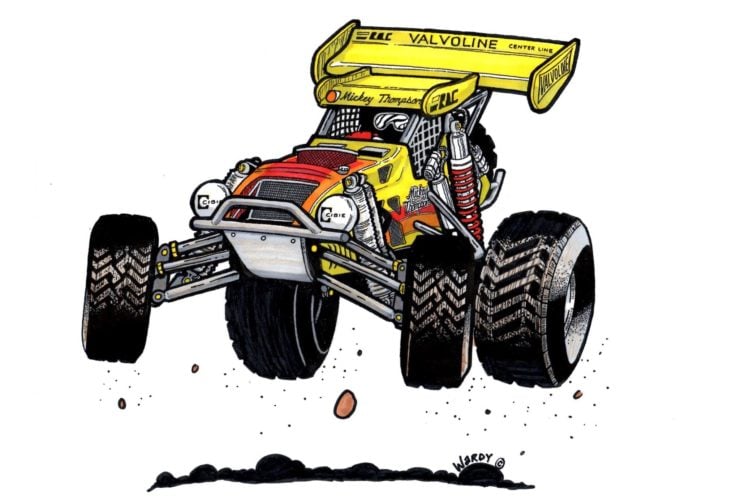 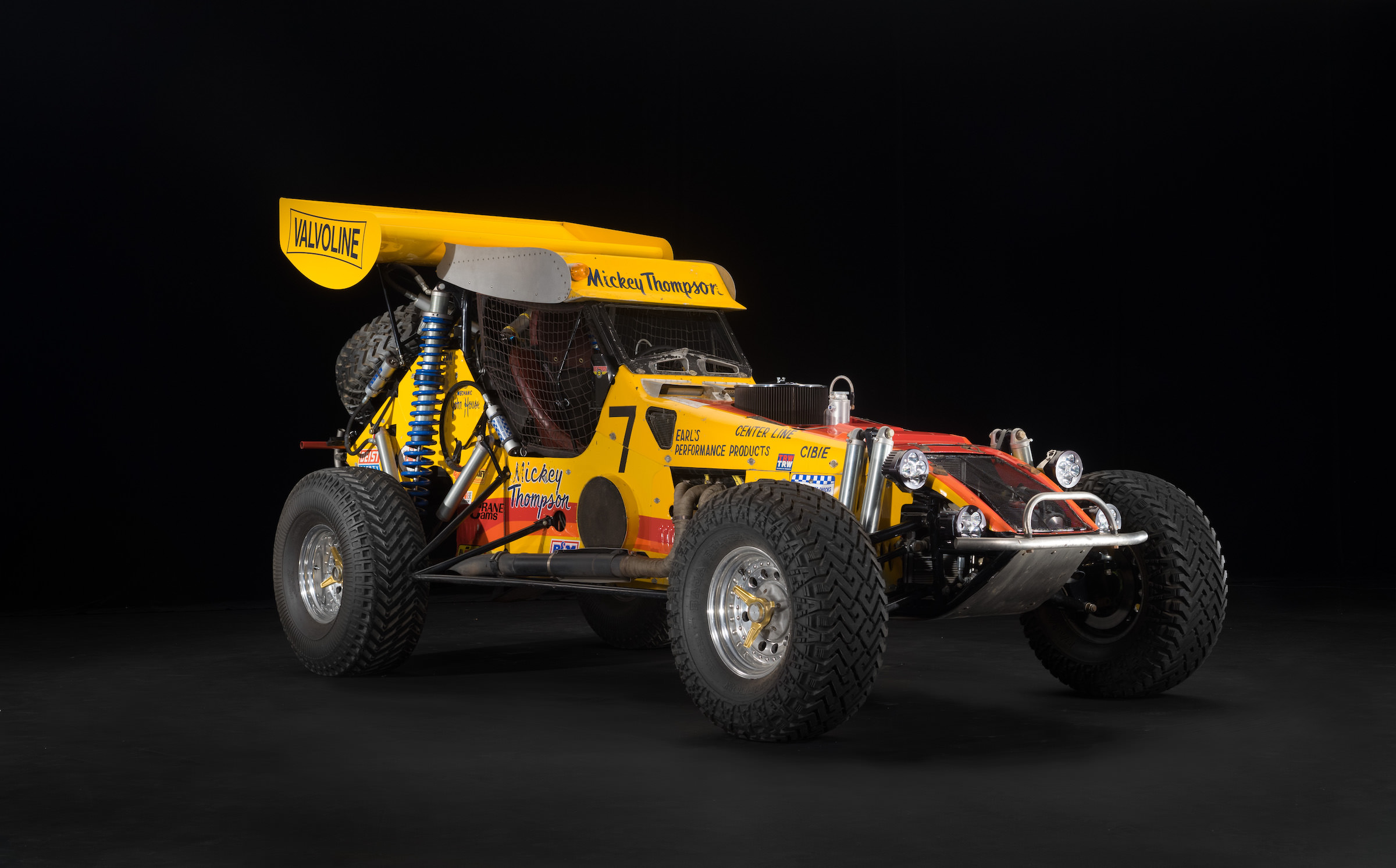 This is thought to be one of the first examples of the Lotus Excel to be fitted with flared wheel arches, which had been…

In the days before the widespread production of unibody cars the world was largely dominated by cars that utilized body-on-chassis construction. As a result of this…