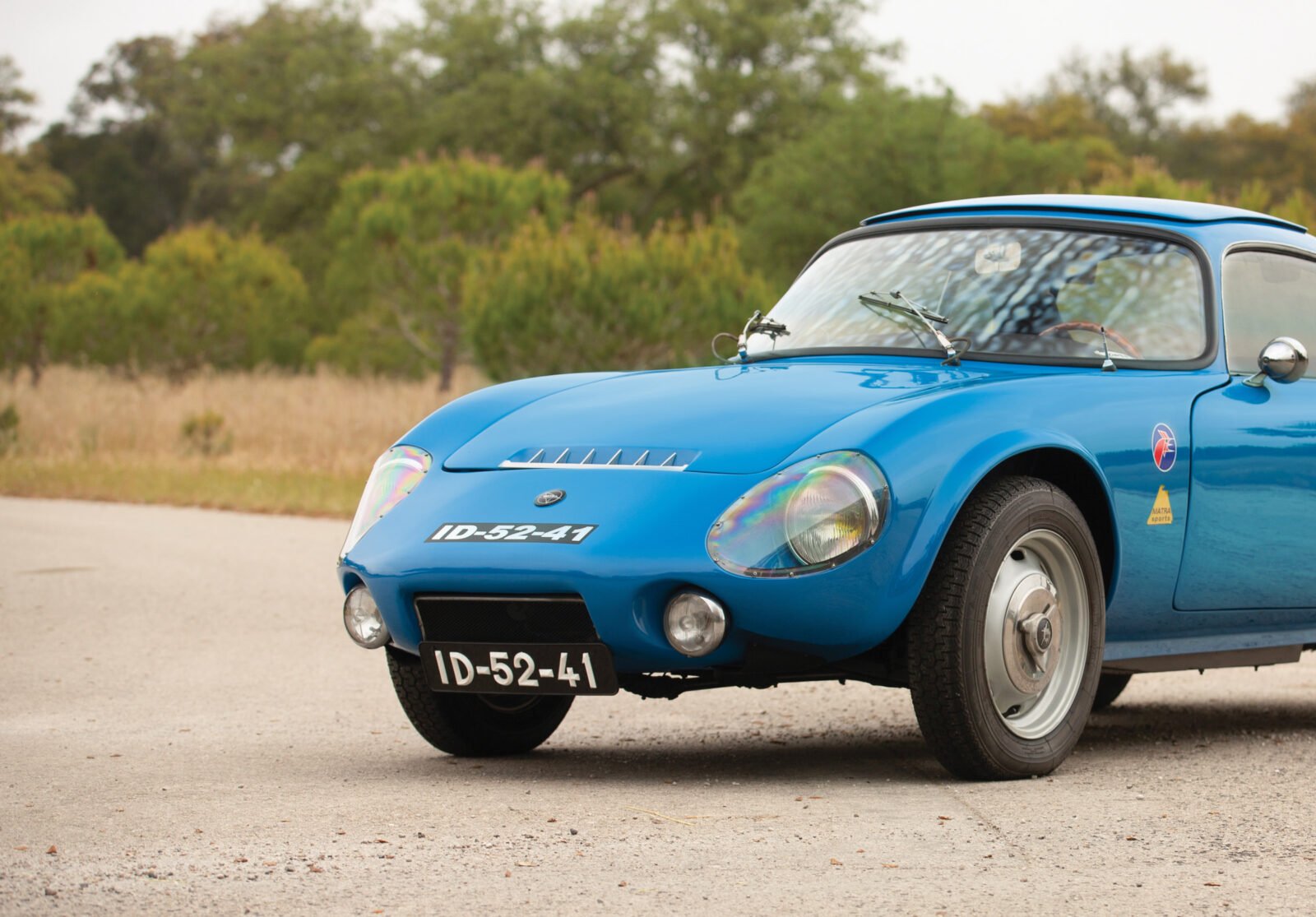 The Matra Djet V (pronounced “jet”) and it’s forebear, the René Bonnet Djet, have the distinction of being the first full production car with a mid-engined layout, beating both the De Tomaso Vallelunga and the Lamborghini Miura to the punch.

Though it should be pointed out that as with any automotive first, there is considerable contention over this point.

Yuri Gagarin and his Matra Djet

A Djet was also gifted from the French government to Yuri Gagarin, the first man in space. It must have been quite a sight to see Yuri in his Djet among the otherwise less exciting cars typically seen on the roads of the Soviet Union. 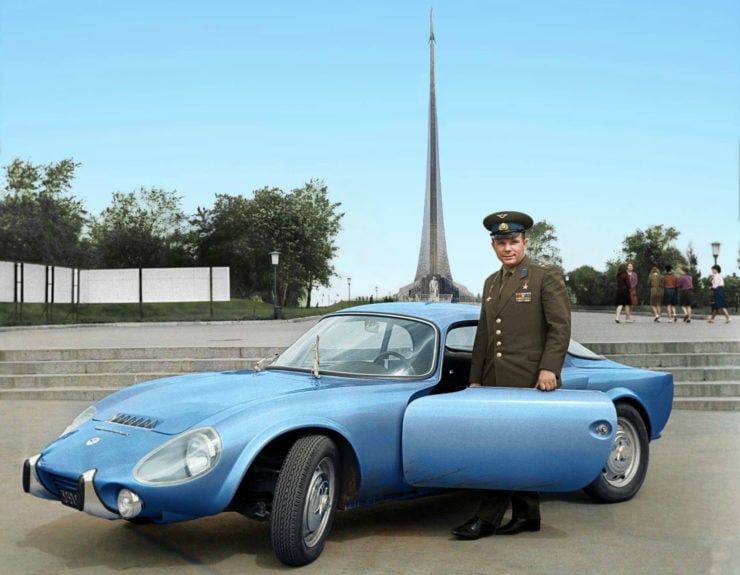 Above: Yuri and his Djet, image courtesy of Weird Russia.

The Djet was a notably advanced car for its era, first introduced in 1962 the car featured a full composite (glass fibre) body, fully independent front and rear suspension consisting of double A-arms and coil springs, disc brakes on all four corners, a mid-mounted engine, exceptionally good aerodynamics (the Cv is approximately 0.25), and a kerb weight of between 615 and 660 kilograms (1,355 to 1,455 lbs).

A specification list like this wouldn’t be at all out of place for a brand new low-production sports car released today, almost 60 years later.

It’s likely that the styling of the Djet was influenced by Bonnet’s compatriots over at Alpine who had been building glass fibre sports and racing cars with engines in the rear since 1955. The mid-engine location, as opposed to the rear-engine location of the Alpines, gave the Djet more predictable handling that was perhaps a little more suited to non-professional drivers.

Funnily enough, Bonnet named the model “Djet” because he was worried the French wouldn’t pronounce the word “jet” correctly, but rather with a soft “d”. 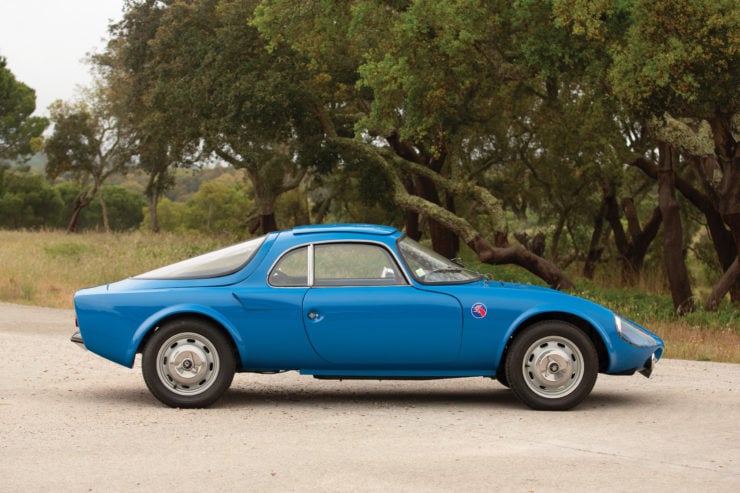 The Matra Djet featured a slightly unusual chassis consisting of a fibreglass body bonded directly to a steel frame for improved rigidity. The design of the Djet’s body features a low sweeping nose up over a deeply curved windscreen across the roofline and then down a long rear window.

The tail of the car is a semi-Kammback design, all together the aerodynamics of this body gave even the smaller-engined 1.1 litre Djet a top speed in excess of 105 mph – a considerable speed for a small sports car at the time.

Matra (Mechanique-Aviation-TRAction) took over Automobiles René Bonnet in 1964 after the automaker ran into significant financial troubles. Matra was well placed to take over production and the French aerospace and missile manufacturer was already building all of the fibreglass bodies for the Djet. 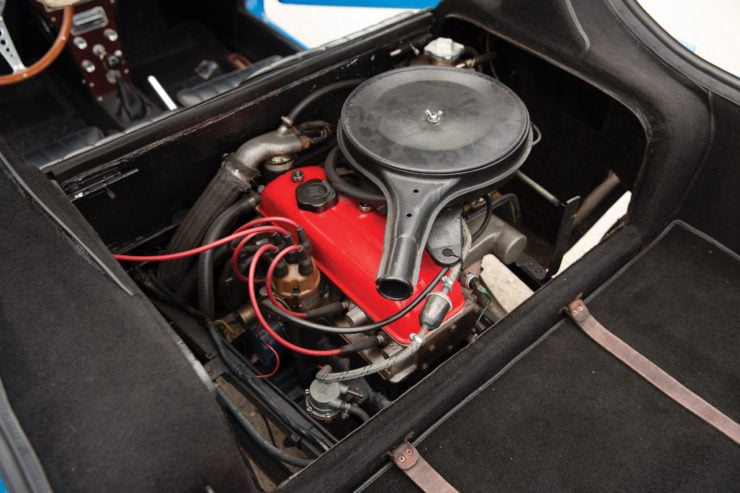 Matra would go on to have a remarkably successful time in the automotive world, winning the Formula 1 Drivers’ and Constructors’ Championships in 1969, as well as multiple wins at the 24 Hours of Le Mans.

Just 916 of these were ever made and it’s not known how many have survived, this one still has its original wheels, and a glance at the engine bay and interior gives the distinct impression that the car is very close to factory-original from bumper to bumper.

This example of the Djet has been in Portugal since at least 2002, it due to sell with RM Sotheby’s at the Sáragga Collection Auction on the 20th of September. There’s no reserve on the sale, if you’d like to read more or register to bid you can click here to view the listing. 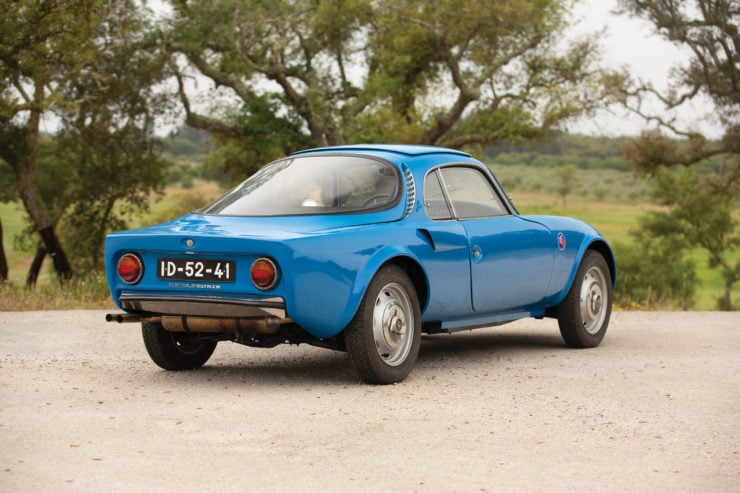 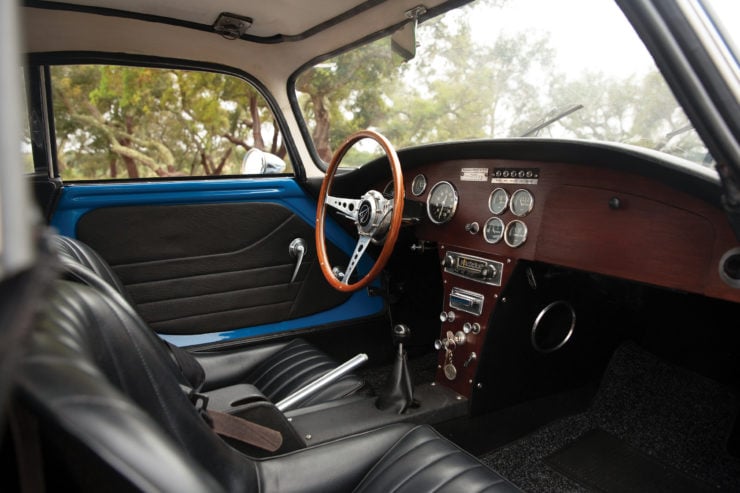 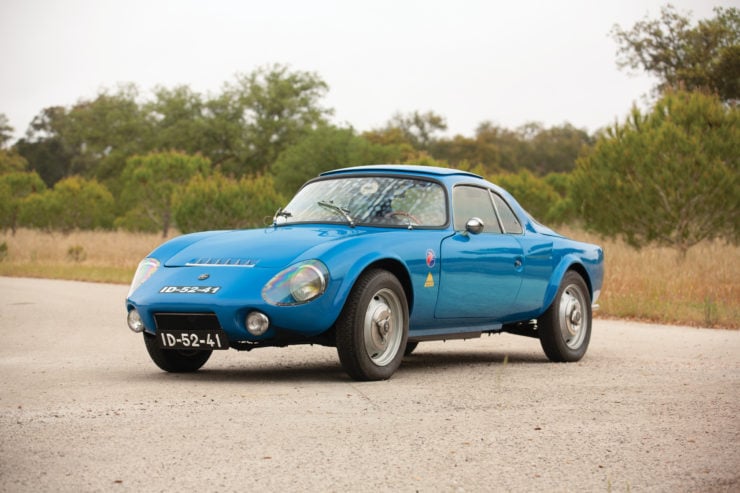 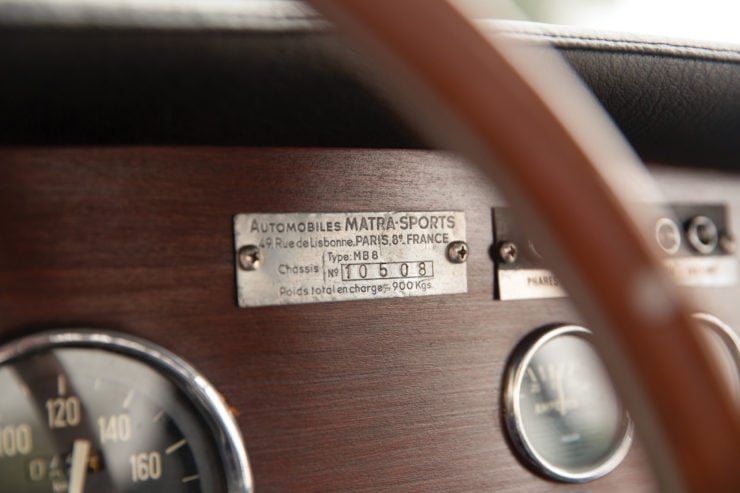 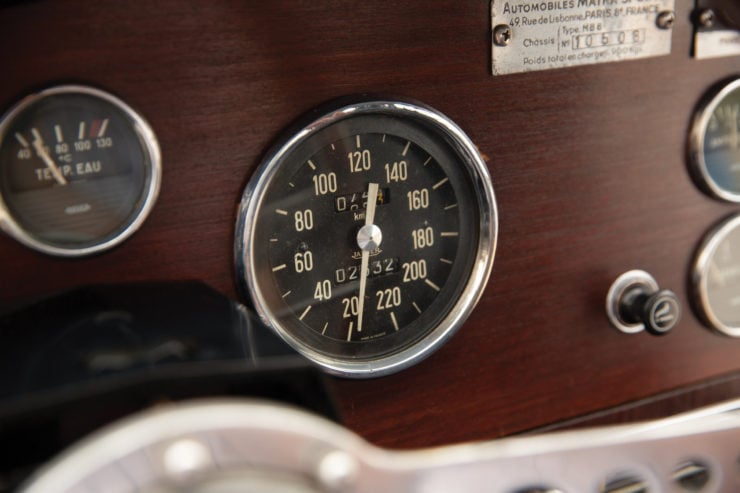 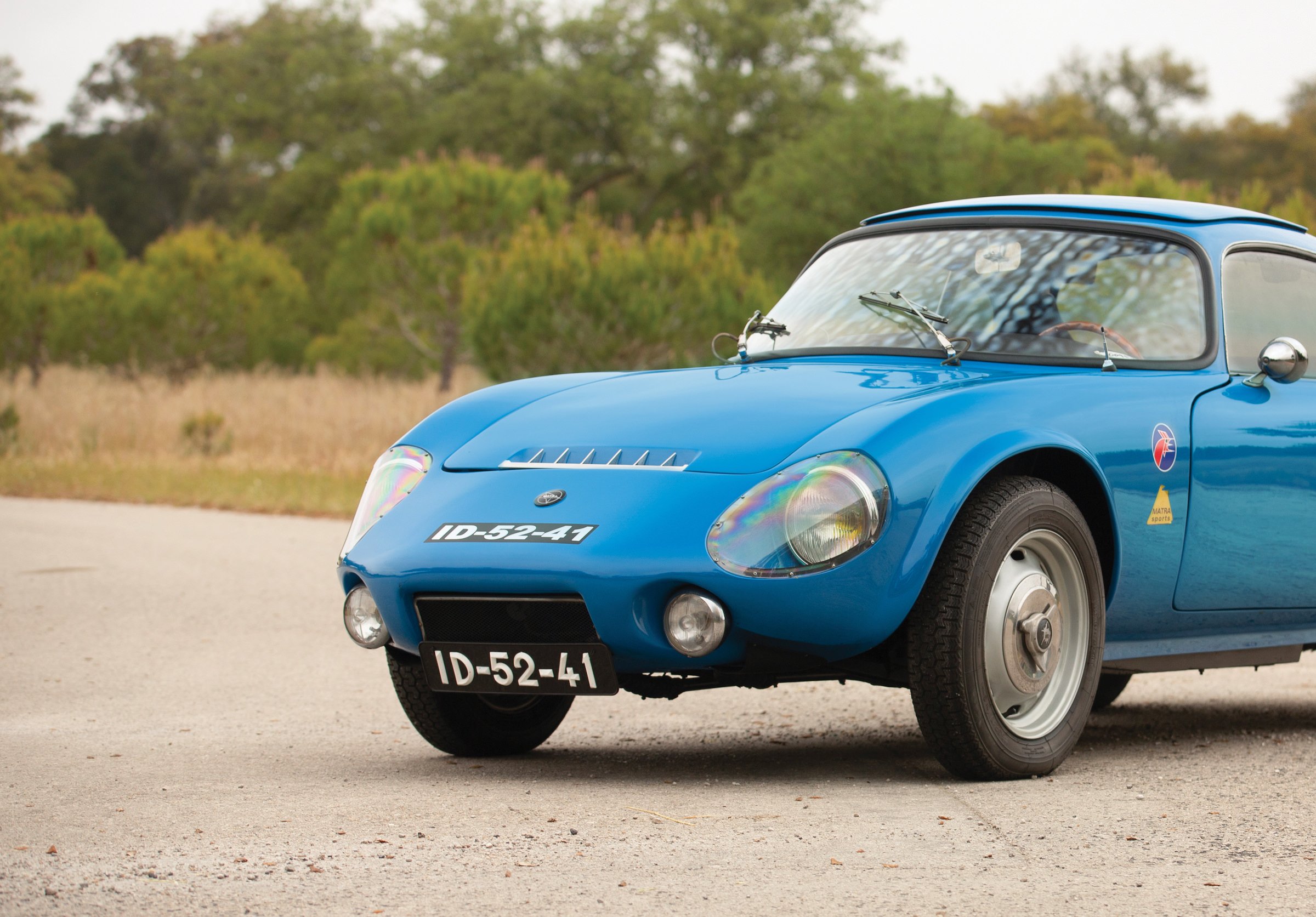