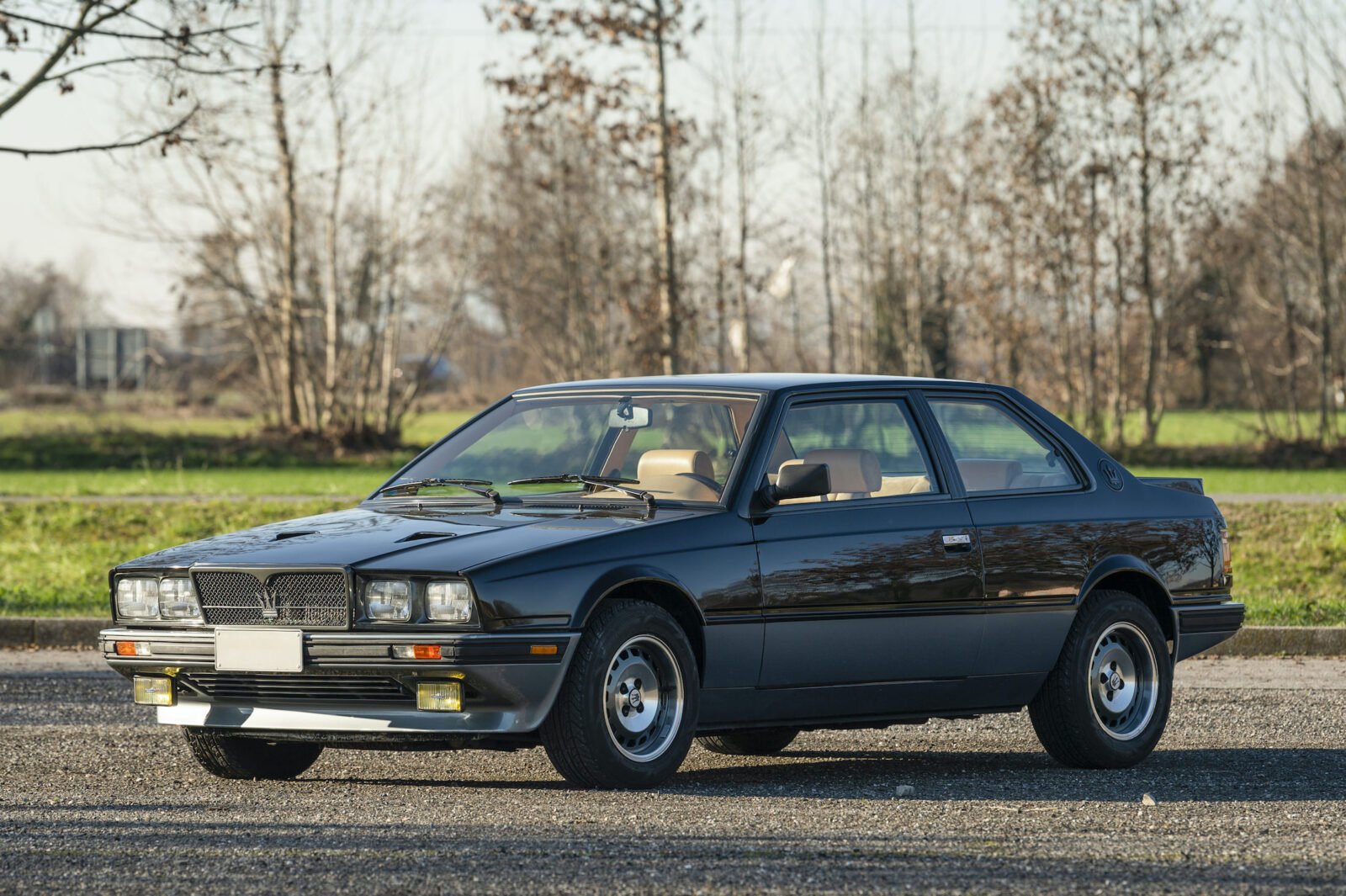 This is the Maserati Biturbo Si Black, just 105 of these were built between 1986 and 1988, and they’re powered by what was the world’s first production twin-turbocharged engine.

If you’re anything like me, and you grew up in the 1970s or 1980s, you likely have a soft spot in your heart for two very specific kinds of cars – wedges and anything with a turbocharger attached.

The Biturbo was developed under the watchful eye of company owner Alejandro de Tomaso to be a more affordable car that could function admirably as both a practical three-box daily driver and as a sports car when the owner was in the mood. In fact the car’s philosophy was somewhat similar to the earlier BMW 2002 and the BMW 2002 Turbo which had been the world’s first production car with a turbo.

From the outset Maserati knew they needed to keep the Biturbo in production for a number of years, and that it needed to be relatively affordable to build. They developed a stamped steel unibody shell for the car with body styling by Pierangelo Andreani.

Above Video: A period-review of the Maserati Biturbo Si by Motorweek.

Andreani used the origami-style for his design that had been popularized by Giugiaro and Gandini back in the late 1960s and 1970s. Interestingly, Gandini himself would be hired to revamp this car in 1988 and 1991 with facelifts to keep the styling current.

The Biturbo was fitted with a SOHC, 90º aluminum V6, it was an all-new engine that was somewhat influenced by the outgoing 2.0 litre engine used in the Maserati Merak. Interestingly the Merak engine had been based on earlier Maserati V8 Formula 1 engines, a fact which which was mentioned frequently by Merak owners at cocktail parties no doubt.

Keeping the car affordable whilst also staying true to Maserati’s sporting heritage were key criteria for the Biturbo, which was a large part of why a twin turbo set up had been chosen. It allowed a sub-2.0 litre model to be developed that would slide in under the hefty 38% value added tax (VAT) levied by Italy at the time against cars with an engine size of over 2000cc.

Maserati did offer larger engine sizes for export markets, including a 2.5 litre and a 2.8 litre, however the punchy 2.0 litre unit has always been popular. Power was sent back through a 5-speed manual or one of two automatic gearbox options to the rear wheels. The car rides on independent suspension with MacPherson struts up front and semi-trailing arms in the rear with sway bars front and back.

Although there were some early quality control issues with the Biturbo that led to bad press, the model was a success for Maserati – they sold almost 12,000 of them between 1981 and 1989 and the model would go on to live until 1994 with design refreshes. 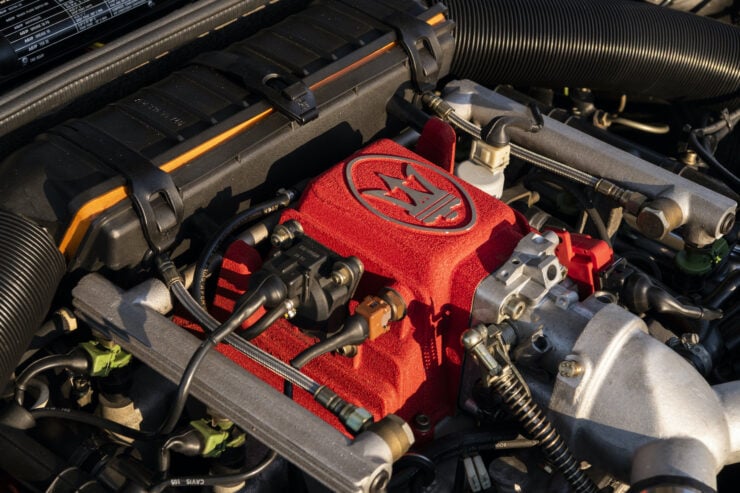 Above Image: The fuel-injected, twin-turbo V6 used by the Biturbo Si producing 220 hp.

Today we’re seeing increasing interest in cars from the 1980s and many vehicles like the Biturbo are getting a second lease on life with new owners who love their looks and the analog driving experience.

The Maserati Biturbo Si Black is one of the rarest iterations of the Biturbo, the car had a two-tone black over grey colour scheme, and it featured the same drivetrain as the standard fuel-injected Biturbo Si – with 220hp at 6,350 rpm and a top speed of 228 km/h (142 mph).

This car was delivered to its first owner in Italy in June of 1987 and it still retains its original engine. Over the intervening years the car has accumulated just 35,410 kms on the odometer thanks to the fact it was carefully stored away for many years.

More recently the car was recommissioned by Milano Brianza and it’s been routinely maintained ever since. If you’d like to read more about the car or register to bid you can click here to visit the listing on RM Sotheby’s. It’s due to roll across the auction block in late February and it’s being offered without reserve. 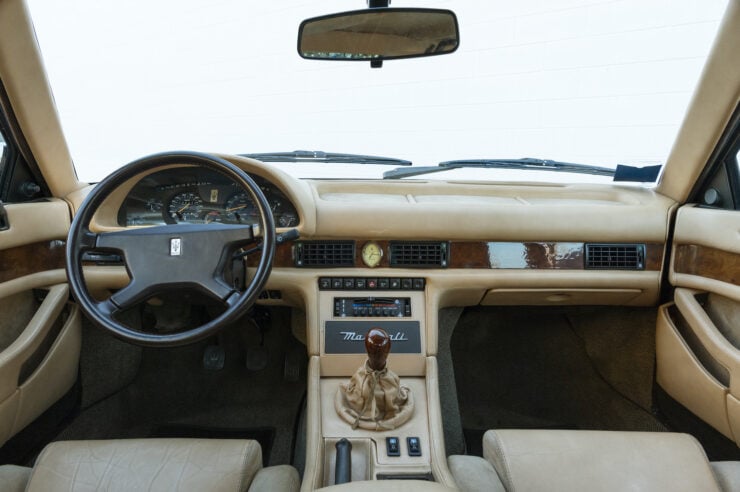 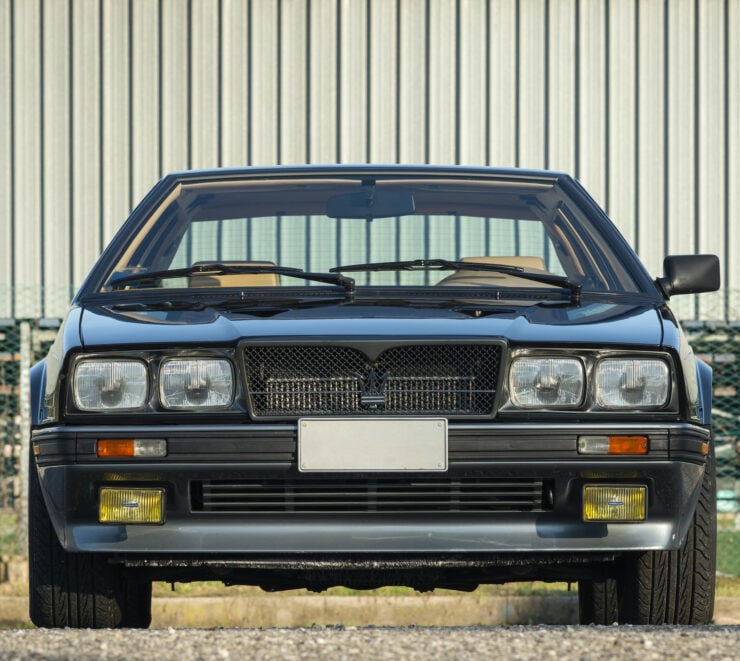 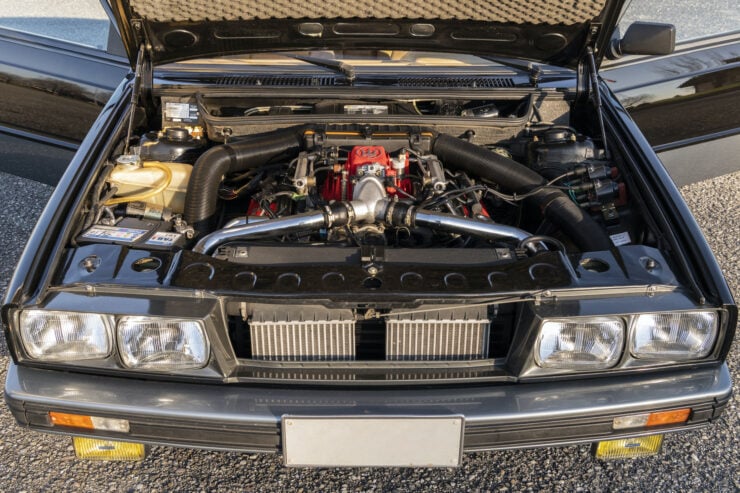 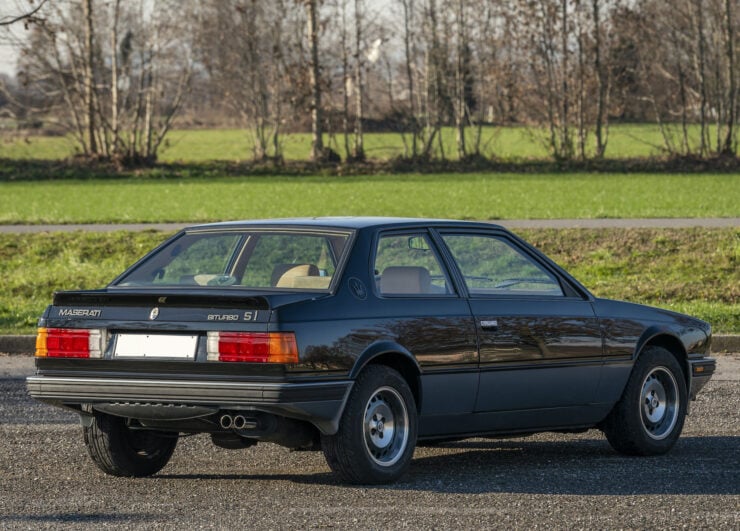 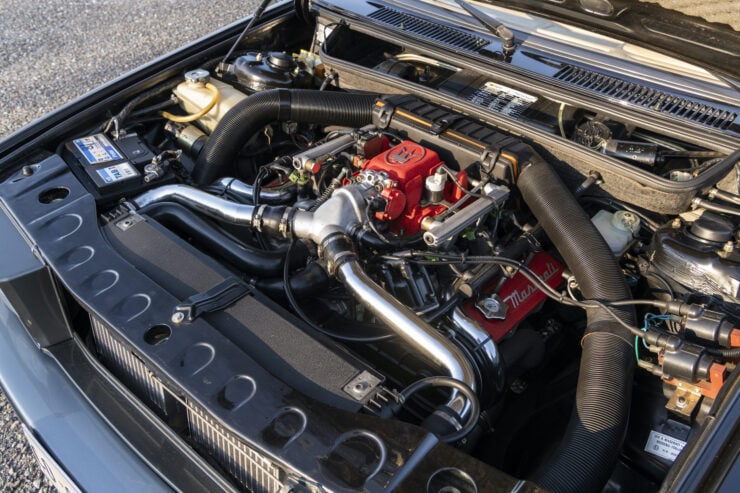 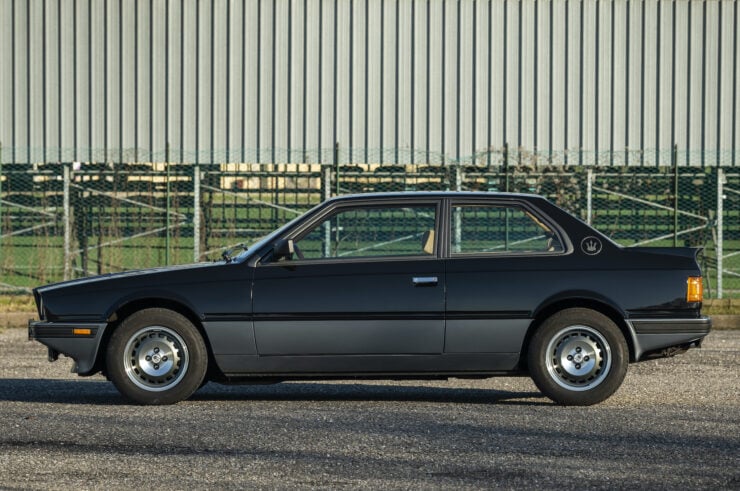 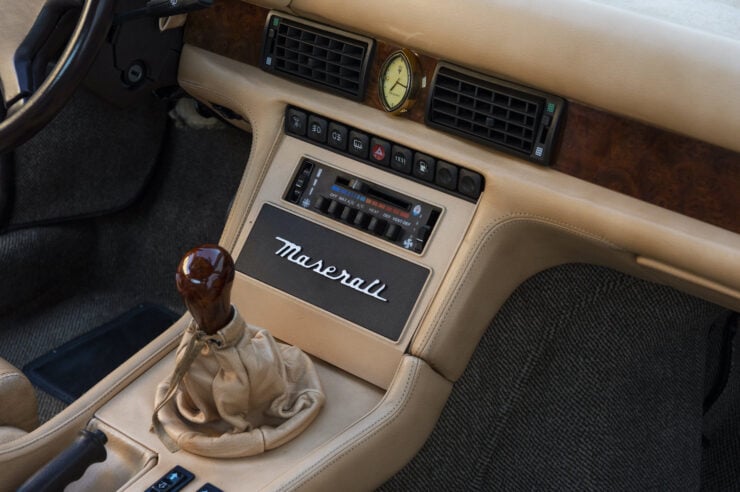 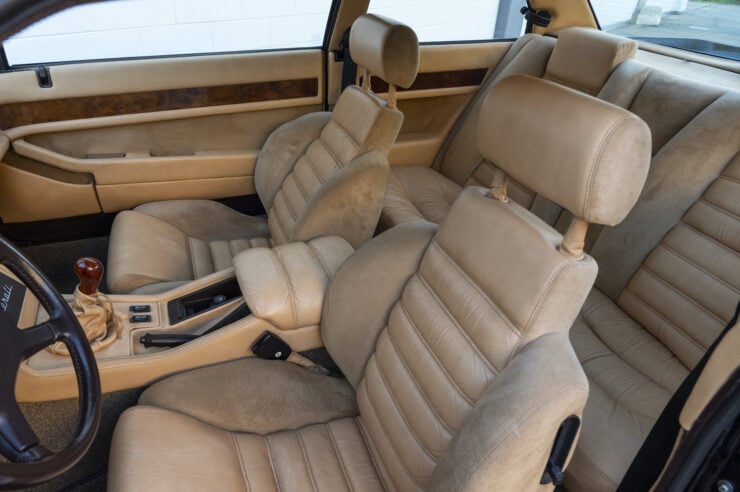 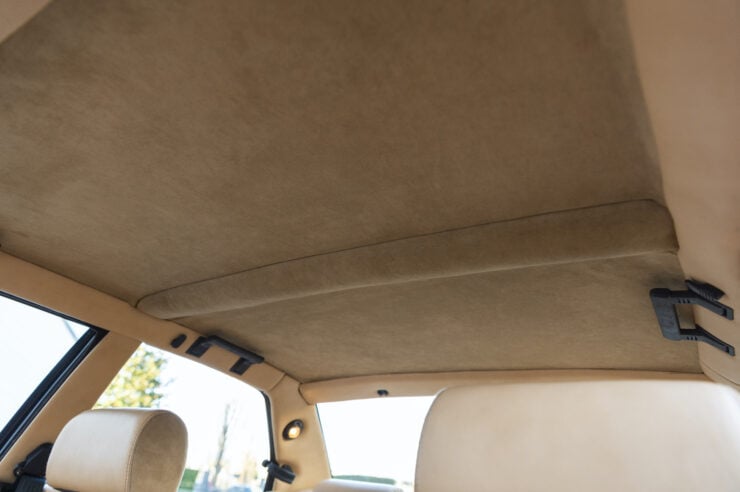 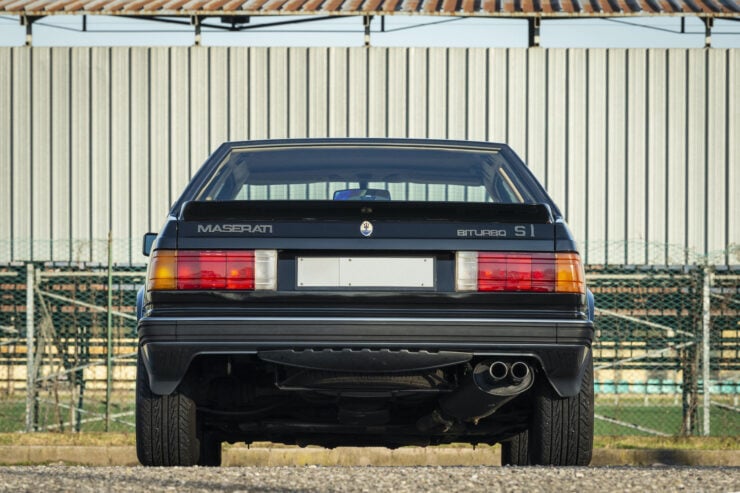 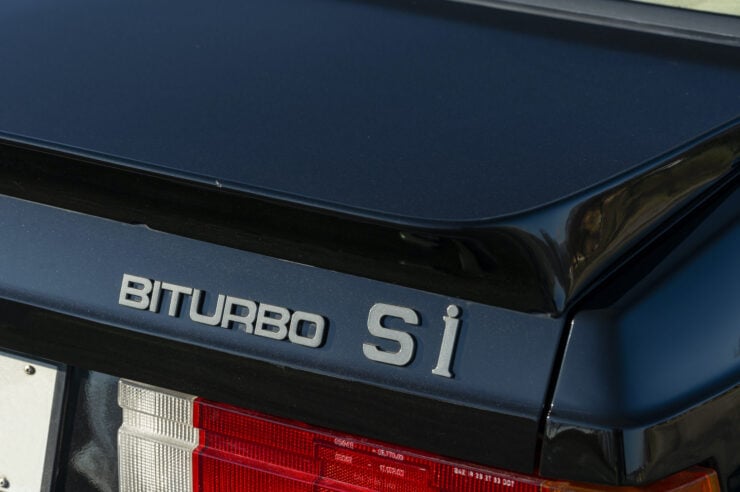