The Martin JRM Mars was designed and built for the US Navy during WWII as a long-range ocean patrol flying boat. It would be the largest Allied flying boat to enter production and it had a range of 4,900 miles or 8,000 kms.

Ultimately just six examples would be built from an initial planned production run of 20, due to the fact that the war ended. In the years since the war four of the aircraft were converted for water bombing duties to combat wildfires, they could drop 7,200 US gallons and cover an area of 4 acres on each pass.

Originally conceived in 1941 as an up-scaled version of the Martin PBM Mariner flying boat, the Martin JRM Mars would become the largest Allied flying boat to enter production during WWII.

Above Video: This short film shows the Hawaii Mars II in service, it includes a video walkthrough of the plane, and it also shows some of the other JRM Mars aircraft in military service.

The plan was to use the JRM Mars as an ocean patrol boat, mostly in the Pacific, to keep tabs on Japanese military movements. As a result the aircraft was designed with a very long range by the standards of the day of 4,900 miles – over 25.7 hours of flight time at the 190 mph cruising speed.

The first prototype aircraft flew on the 23rd of June 1942, it was then passed to the US Navy for testing until 1943. The mission requirements for the JRM Mars had changed by this point, the aircraft had originally even announced back in November of 1941, just a month before the Japanese attack on Pearl Harbor.

Rather than using the JRM Mars has a long-range flying patrol boat it was decided to use it for carrying cargo to Hawaii and other remote Pacific islands. Up to 32,000 lbs (15,000 kgs) of cargo could be carried on each flight, and the plane could land anywhere there was enough water – which is not typically a problem in the Pacific.

Of the 20 that were initially planned just five additional examples of the JRM Mars would be built before the war ended and further production was ceased. 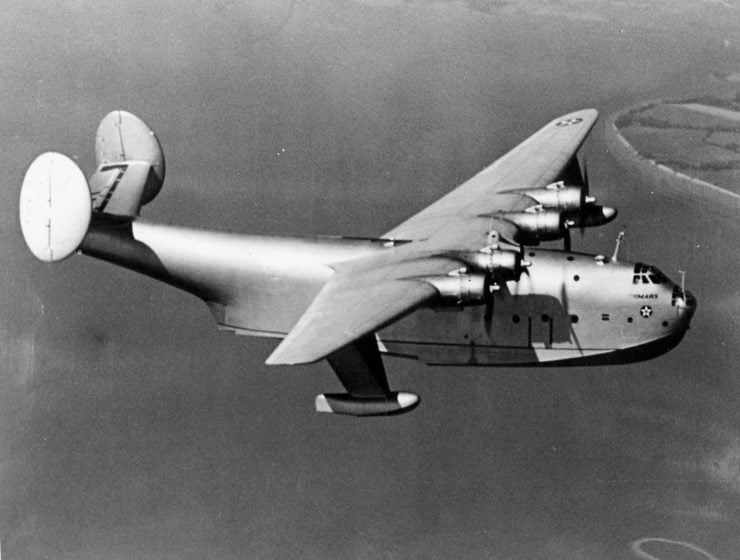 This is the Martin XPB2M-1 Mars prototype in flight. It first flew as a patrol bomber prototype and was later converted into a transport aircraft. Image courtesy of the US Navy National Museum of Naval Aviation.

The first production aircraft, Hawaii Mars, would be lost to an accident on the Chesapeake Bay in 1945. This left a total of five aircraft in service, they were put into service by the Navy and used as cargo aircraft for Hawaii and other hard to reach areas.

In 1959 they were planned to be scrapped however a Canadian company, Forest Industries Flying Tankers (FIFT), negotiated a deal to buy them and convert them for forest fire tanker duties. Four of the aircraft were bought and converted.

In 1961 Marianas Mars crashed while fighting fires, costing the lives of all four crew members. A year later in 1962 the Caroline Mars was damaged beyond repair by Typhoon Freda.

This left just the Hawaii Mars II and the Philippine Mars in service, they remained in Canada and were regularly used for firefighting for decades, they also saw some service in California in the early 2000s to assist local firefighting services.

Hawaii Mars now remains the only airworthy Martin JRM Mars in the world, it’s been significantly upgraded over the years to improve both its capabilities and its safety standards. 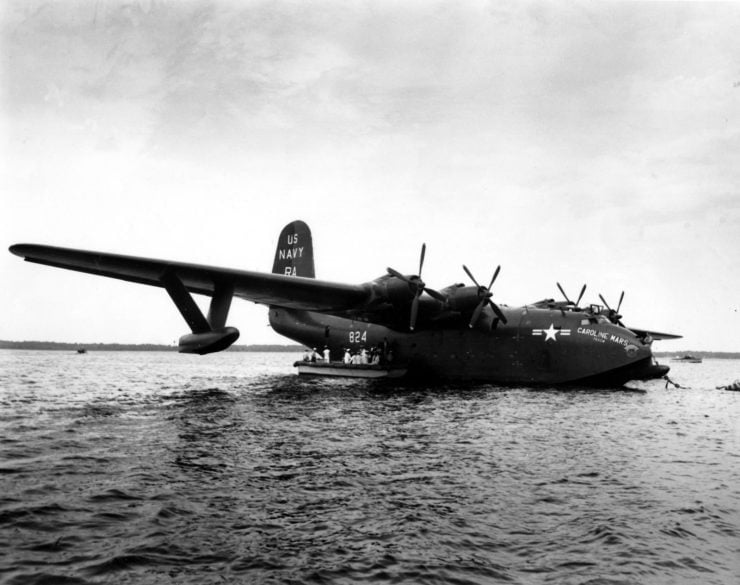 This is the Martin JRM-2 Caroline Mars moored off the Naval Air Station Jacksonville sea wall in Florida. Image courtesy of the US Navy National Museum of Naval Aviation.

Interestingly in 2015 it was used to teach Chinese pilots how to fly large flying boats in anticipation of the Chinese AVIC AG600 Kunlong amphibious aircraft’s first flight in 2017.

Hawaii Mars II is now for sale with Platinum Fighter Sales with an asking price of $5,000,000 USD. Though not cheap by any measure it’s worth remembering that this is the final flying example of the largest flying boat that was produced during WWII.

The aircraft currently has 23,497.8 TTSN – this stands for “Total Time Since New,” the cumulative number of hours its been in the air since it was first built.

If you’d like to read more about this highly unusual aircraft or make them an offer you can visit the listing here.