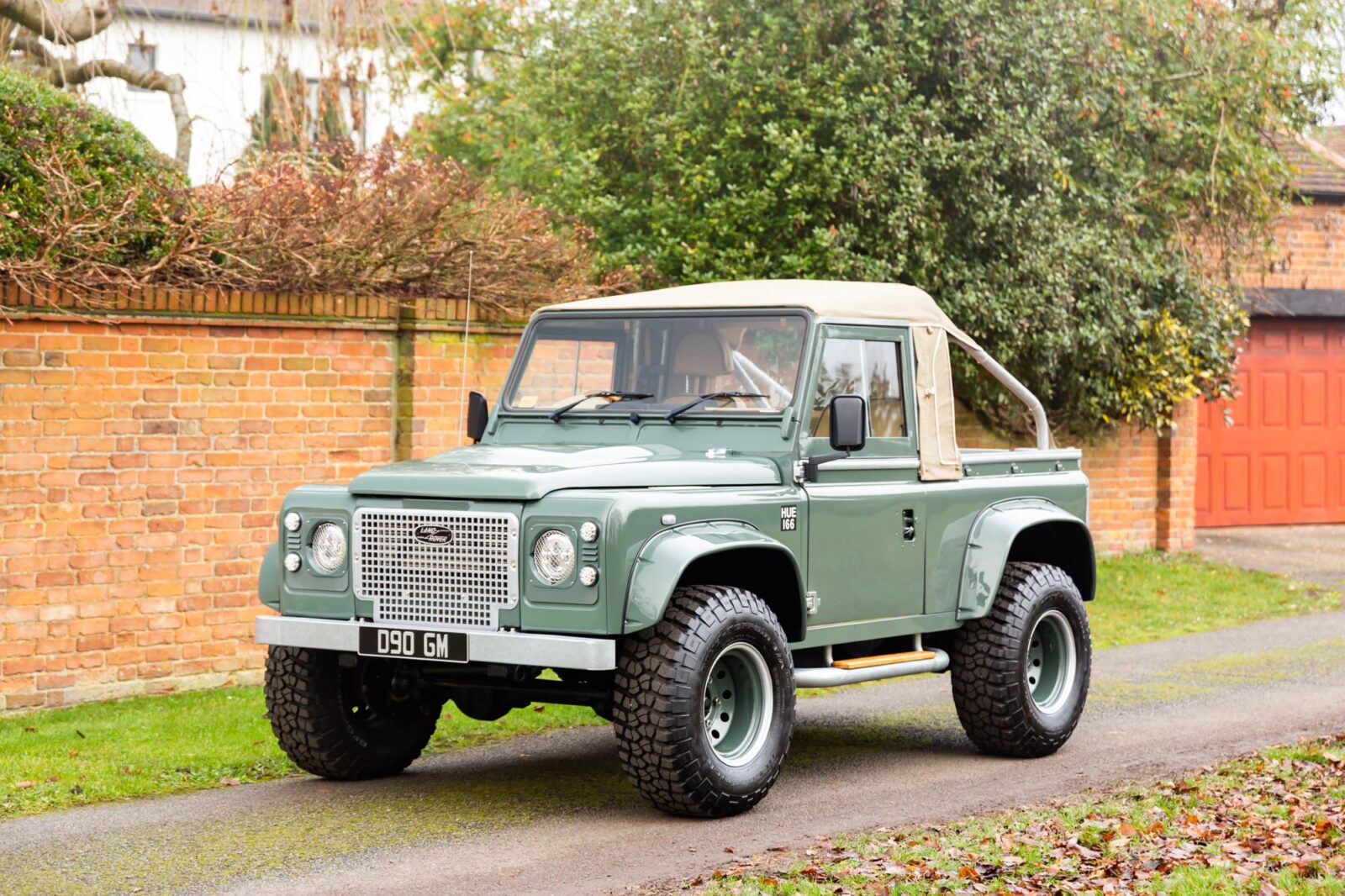 This eye-catching Land Rover Defender custom does a great job of answering the question “what would Hue 166 look like if it had been built in the 21st century rather than the 20th?”

It was developed by Rover’s technical chief Maurice Wilks as a fully-functioning prototype of sorts and it was first shown to the world at the 1948 Amsterdam Motor Show.

The Land Rover was originally developed in post-WW2 Britain to provide farmers with a vehicle that would double as both a small farm truck and a tractor. The body was made from aluminum alloy as steel was still strictly rationed, and the little Series 1 Land Rover quickly became one of the most iconic vehicles of its age. 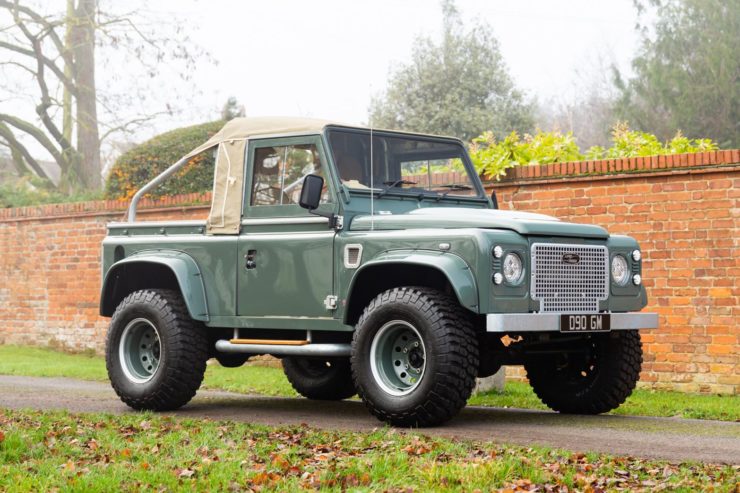 HUE 166 and the Land Rover Defender shown here are both green short wheelbase Land Rovers with two doors, a canvas top, a fold down windscreen, and a tray back. The similarities between the two vehicles are capped off with a small “HUE 166” added to the front left fender of the newer vehicle – a subtle touch that was added to all Heritage Defenders.

The shade of green used is now known as “Huey”, and variants of it have been popular with Land Rover owners for decades. Some say it’s an acquired taste, but once you do get a taste for it it can be difficult to want your Land Rover in any other color.

The Defender 90 you see here was hand-built by the Scottish team at Outlander Vehicles, based in Edinburgh. The original Defender was stripped back to its individual components and every aspect of it received attention. 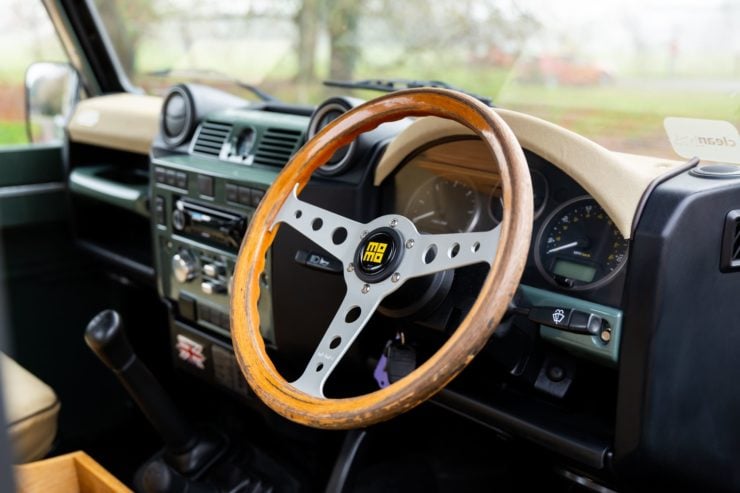 The chassis was galvanized to protect against rust and all body panels received fresh paintwork in Keswick Green as a hat tip to Huey. A custom grille was fitted up front and wheel arch flares were color coded and fitted on each corner to accommodate the new (much larger) rubber.

The new tires are 305/70 R16 BF Goodrich Mud-Terrain tires fitted to deeply dished steel rims in the same color as the body. Tires of this size are ideal for use on sand, loose soil, mud, and other surfaces where you need the largest footprint possible.

For additional safety a galvanized roll cage has been bolted in to protect both the driver and the passenger, and it’s fitted with a removable tan canvas top.

Below each door there’s a step to help entry and exit, it also protects the sills from bottoming out when off-roading and causing serious body damage. 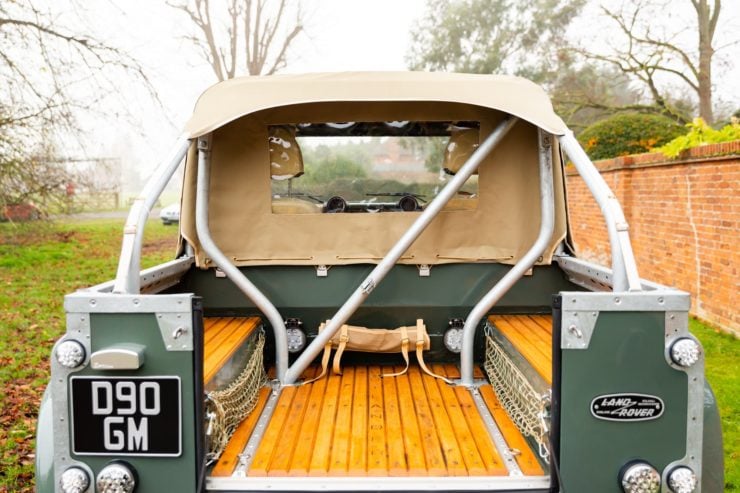 Inside the cab you’ll find both seats finished with durable sand-coloured canvas covers from Exmoor trim, there’s a custom oak centre console box, and it has a tasteful wood-rimmed Momo steering wheel.

Power is provided by the venerable 2.4 litre TDCi (turbo diesel) engine producing 120 bhp and a healthy 265 lb ft of torque, with permanent four-wheel drive and a six-speed manual transmission.

This Land Rover is currently being auctioned live by Collecting Cars, if you’d like to read more about it, register to bid, or see the current price you can click here. 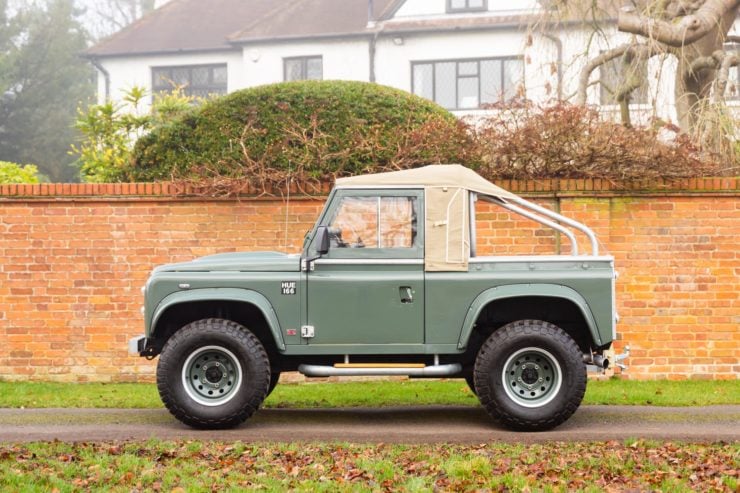 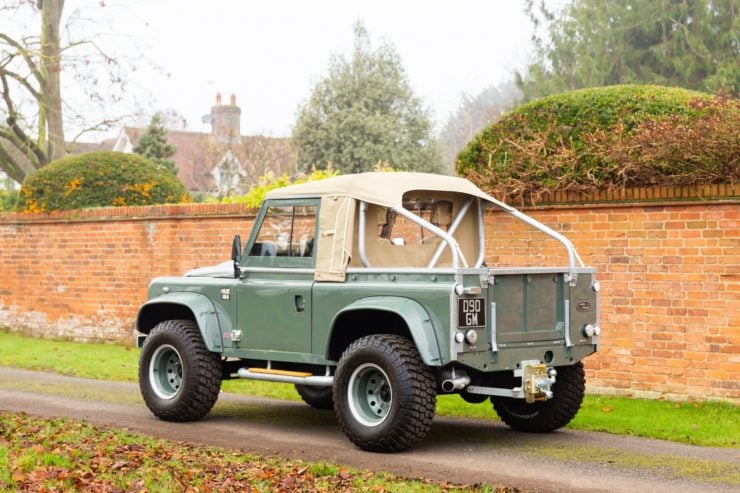 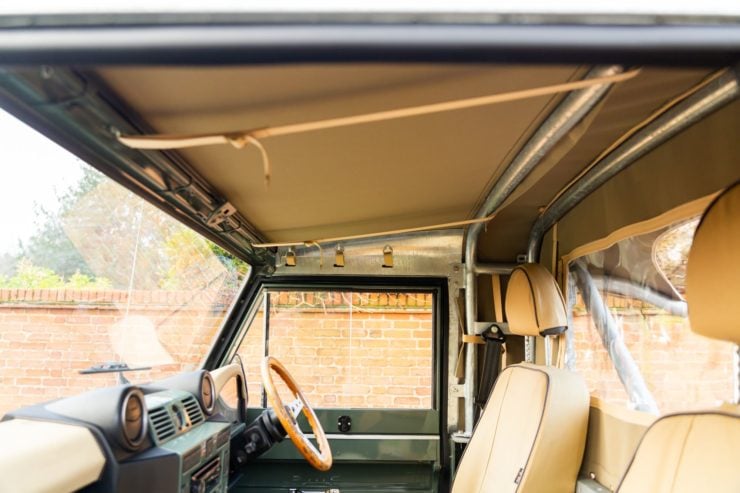 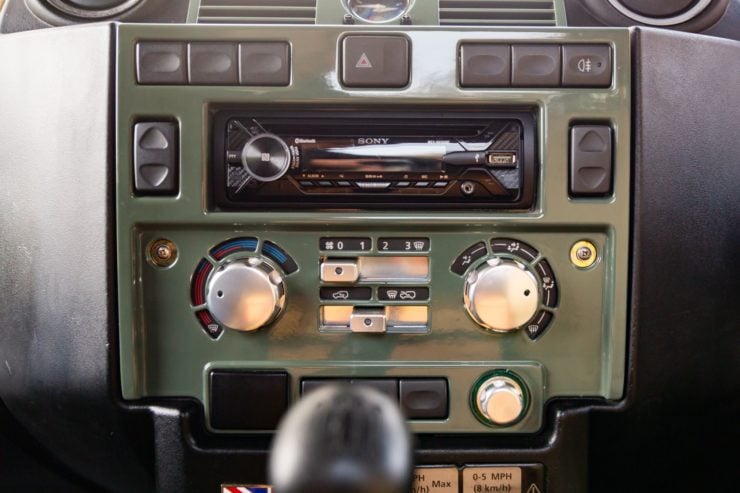 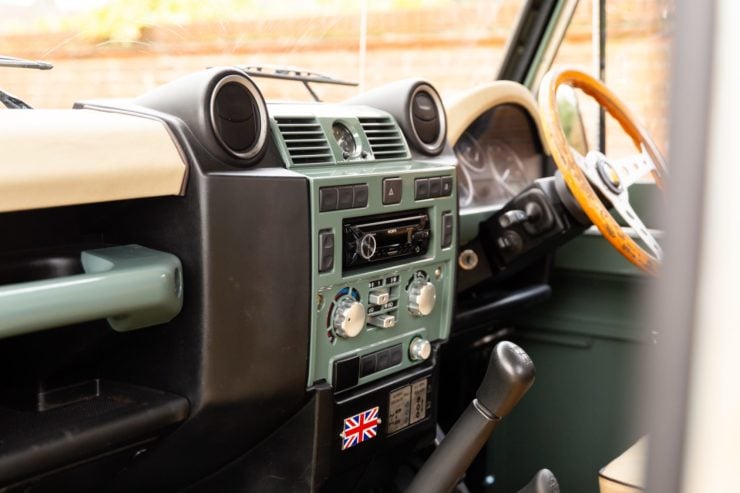 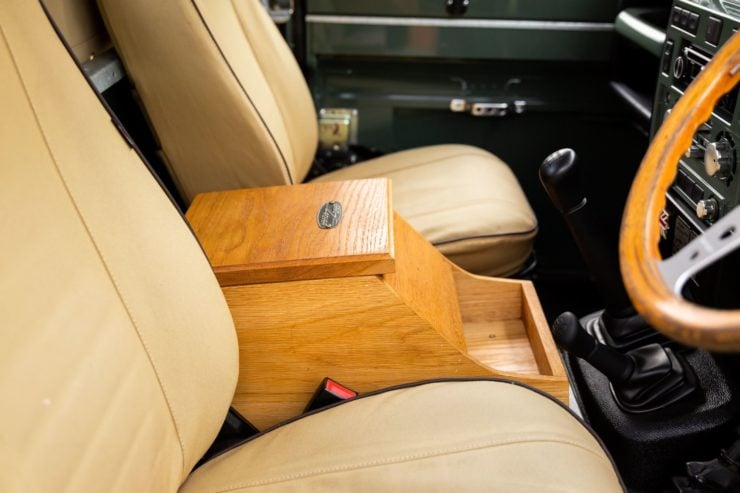 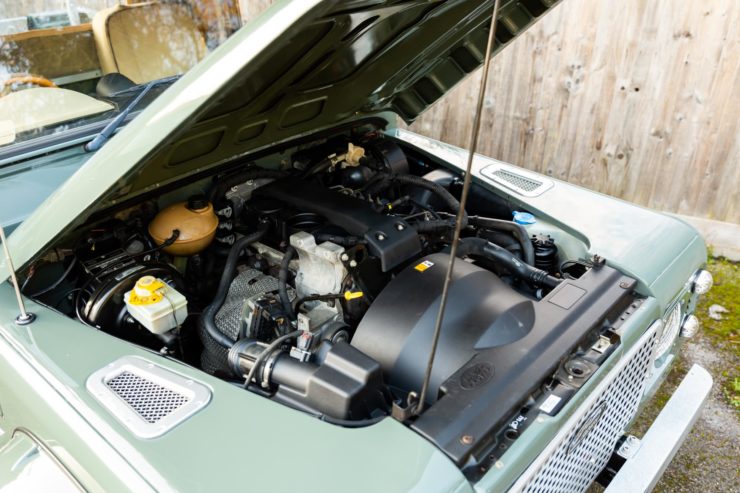 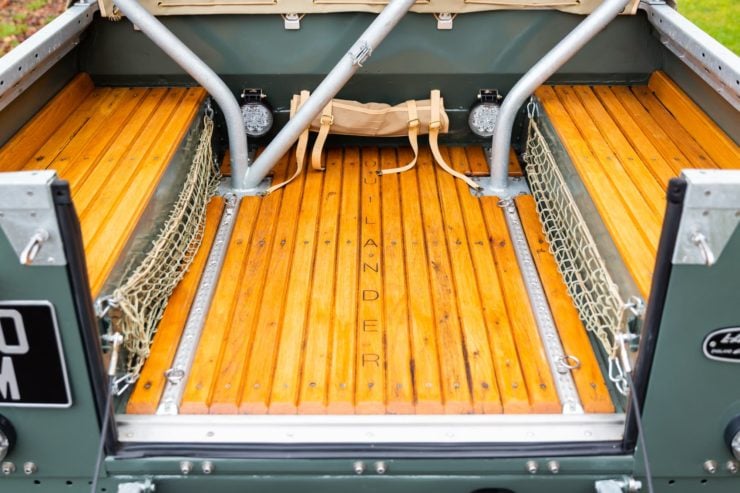 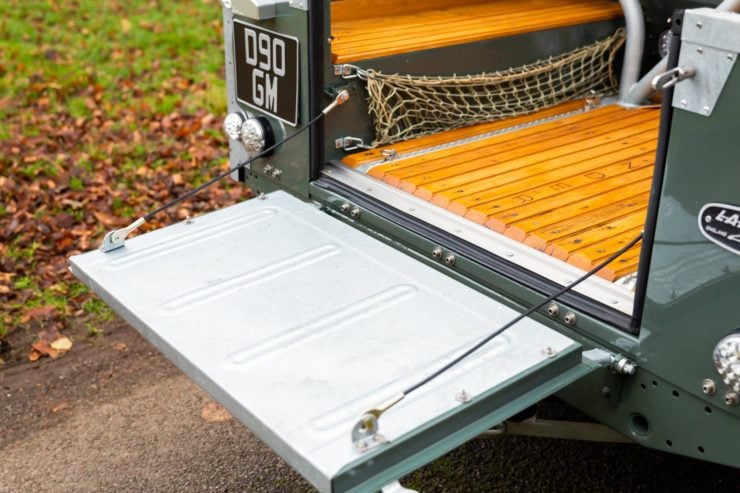 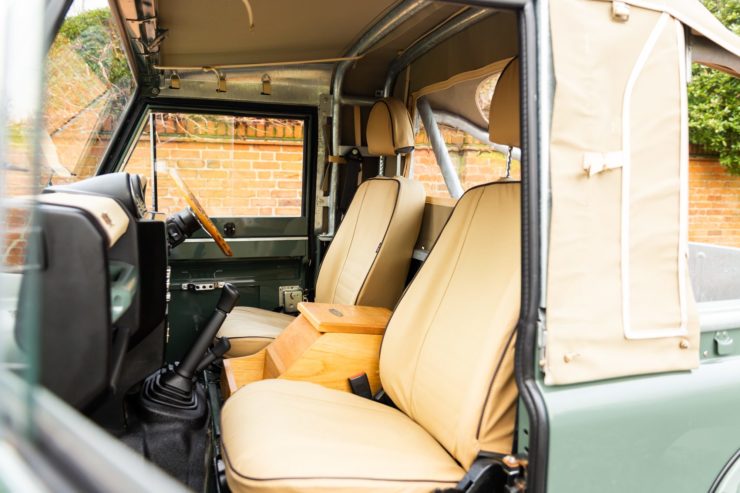 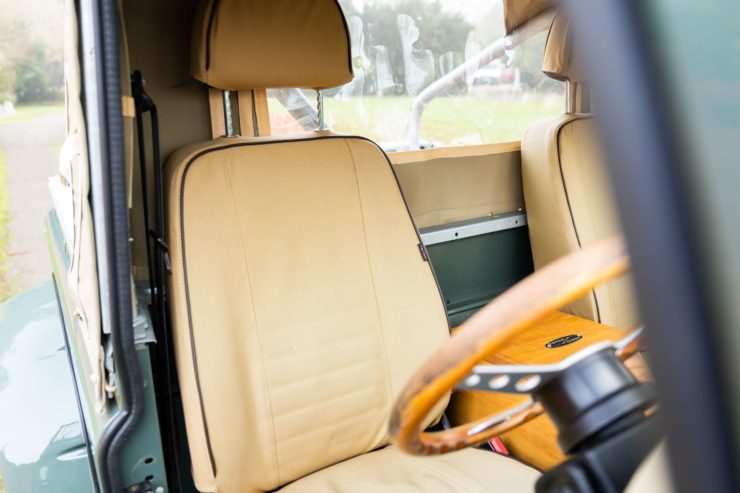