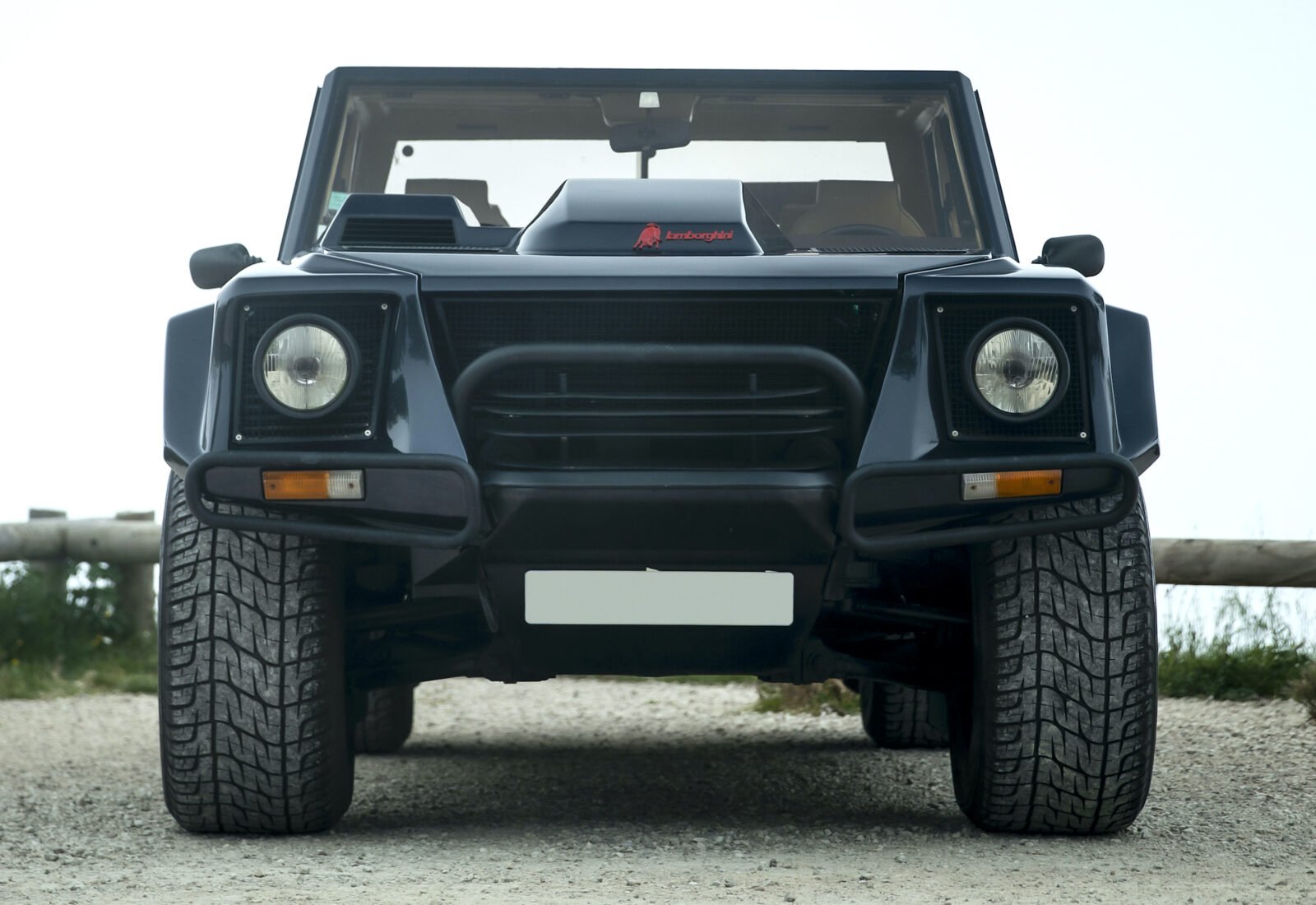 Of all the extraordinary vehicles in the Lamborghini back catalogue there are no production automobiles quite as extreme as the four-wheel drive Lamborghini LM002, better known now as the Rambo Lambo.

When it was first released at the 1986 Brussels Auto Show the LM002 caused jaws around the world to drop as people saw an entirely new automobile genre come to life right before their eyes – the super SUV.

Luxurious SUVs have been around since at least the 1960s of course, with 4x4s like the Jeep Wagoneer and Range Rover offering V8 powertrains, air-conditioning, and a slew of other luxurious amenities usually only found in higher-end road cars.

What Lamborghini did with the LM002 was take a gamble that there was a small but affluent global market for a luxurious SUV powered by a Countach V12, weighing in at almost 3 tonnes and featuring a brutalist road presence that looked like it belonged in a dystopian sci-fi Hollywood blockbuster.

As it turns out, they were right. There was a market of well-heeled folk who thought that the LM002 looked like an ideal daily driver and as a result, Lamborghini sold hundreds of them to a vast array of people, from oil sheiks to Hollywood celebrities like Sylvester Stallone, pop stars like Tina Turner, and even Formula 1 driver Keke Rosberg.

Lamborghini engineers developed a tubular steel frame for the LM002, this was then fitted with a combination of aluminum alloy and fiberglass body panels. A modified version of the Lamborghini Countach V12 was fitted up front, and power could be sent to all four wheels or to the rear wheels only depending on terrain. 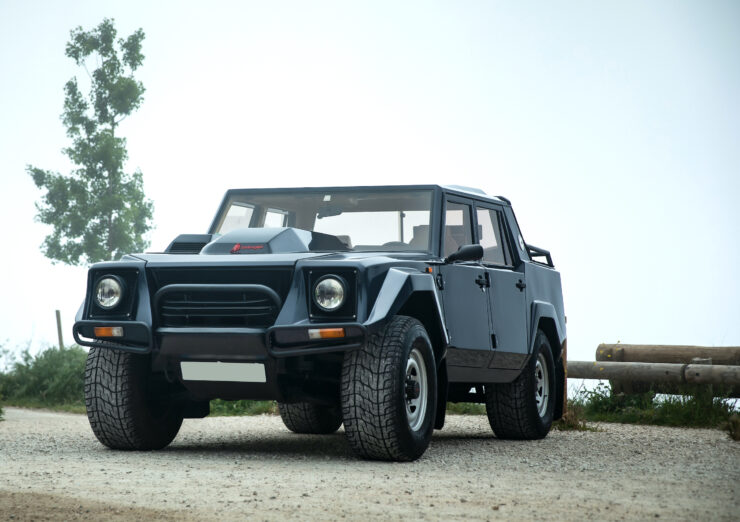 Above Image: The Countach V12 under the hood and no-nonsense styling attracted celebrity owners including Sylvester Stallone.

Although from the outside it looks like a relative to the American military Humvee, the inside is vastly different, with full leather upholstery, thick carpeting, air-conditioning, tinted electric windows, ample sound proofing, and there’s even a surround sound stereo.

It was only a matter of time before someone came up with a nickname for the new Lamborghini, it would be Brock Yates’ famous piece for Car and Driver magazine that would coin the new moniker, an excerpt of which is below:

The performance specifications of the LM002 were almost unheard of for a four-wheel drive at the time, it could dispatch 0 to 60 mph in just 7.8 seconds onto a top speed of 118 mph or 190 km/h.

Due to the weight and the engine choice the fuel tank needed to be borderline oceanic in its proportions, the tank used in the production vehicle measured in at 290 litres or 76.6 US gallons and the vehicle achieved an average of 8 mpg.

The LM002 would be kept in production from 1986 until 1993, 328 would be produced in total and a small number were fitted with the prodigious 7.2 litre V12 developed by Lamborghini for off-shore powerboat racing. 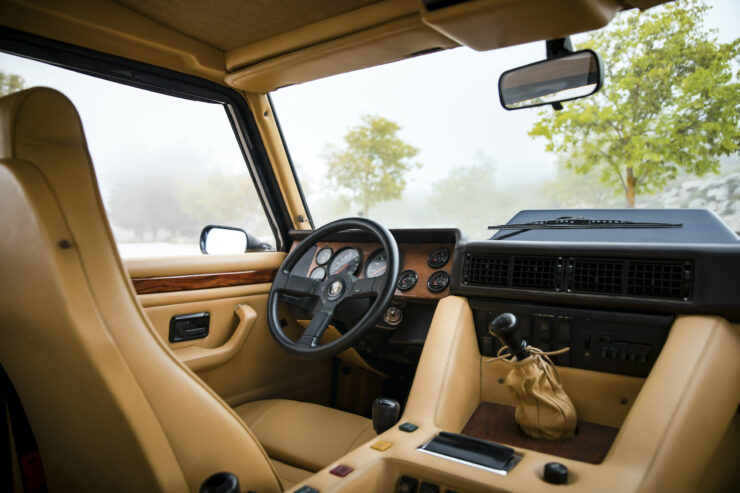 Above Image: The luxurious interior boasts full leather upholstery, air-conditioning, a state-of-the-art stereo (for the era), and plush carpeting throughout.

When Lamborghini unveiled the Urus in 2018 there were many who reacted negatively to the new high-performance Lamborghini SUV, however very few of them realized it had been this same Italian automaker who had first created the genre all those decades ago.

The Rambo Lambo you see here is one of the earlier production models from 1988, it’s a carburetor-engined version which always proves popular with collectors, and the engine was previously rebuilt at Lamborghini Lausanne in 1996.

If you’d like to read more about this unusual Lamborghini or register to bid you can click here to visit the listing on RM Sotheby’s. It’s due to roll across the auction block on the 15th of June in Milan. 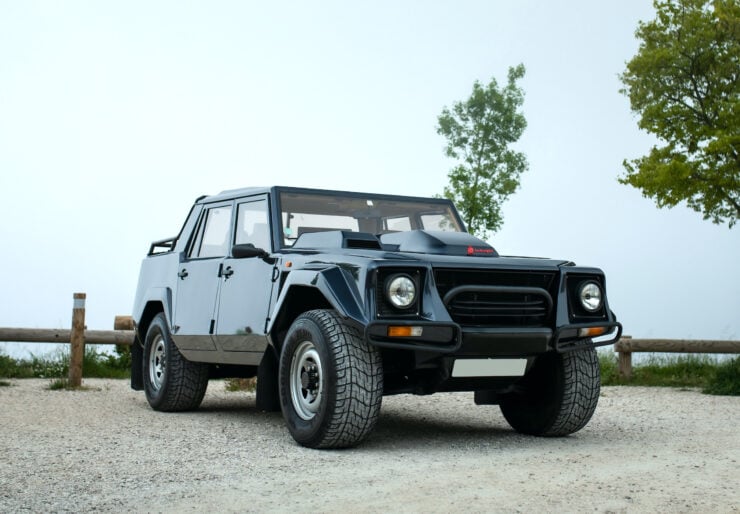 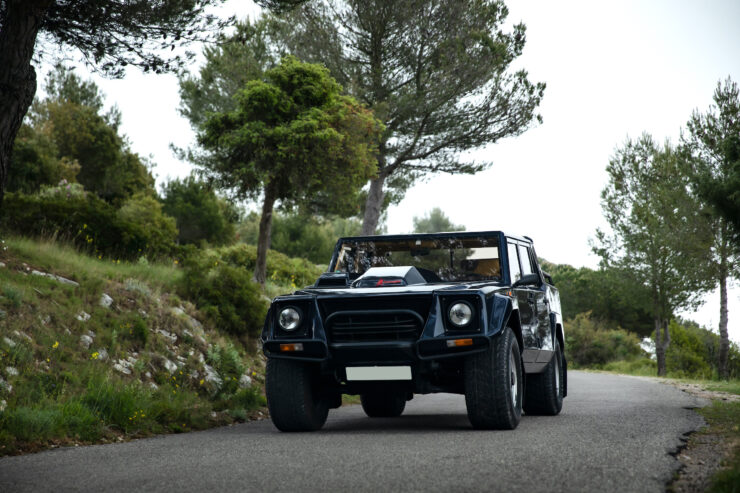 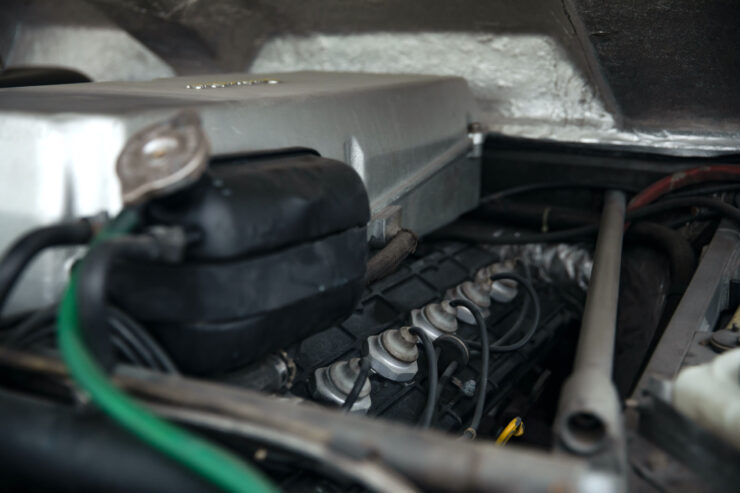 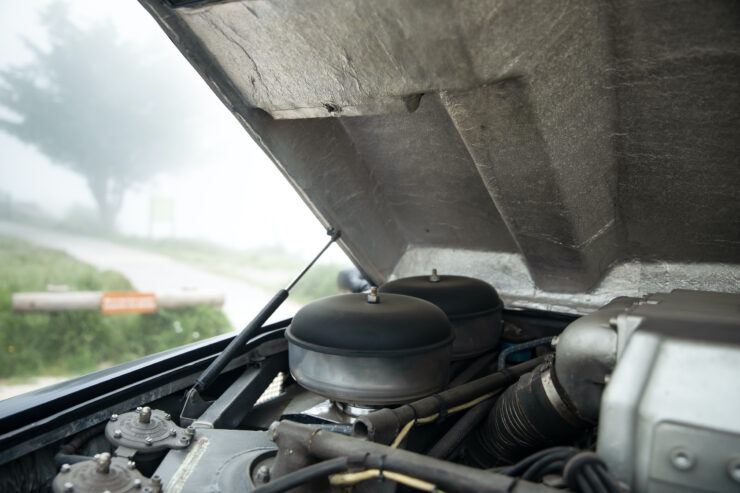 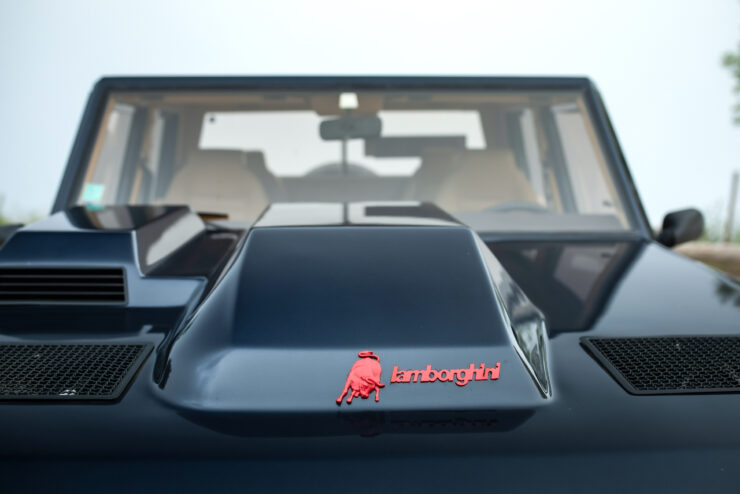 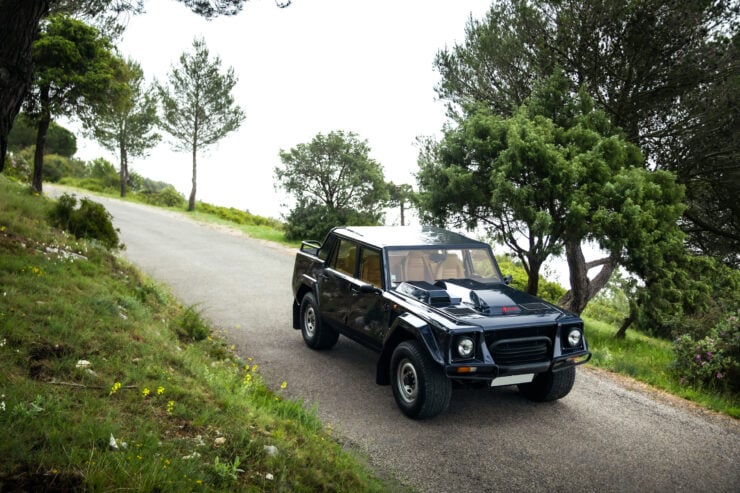 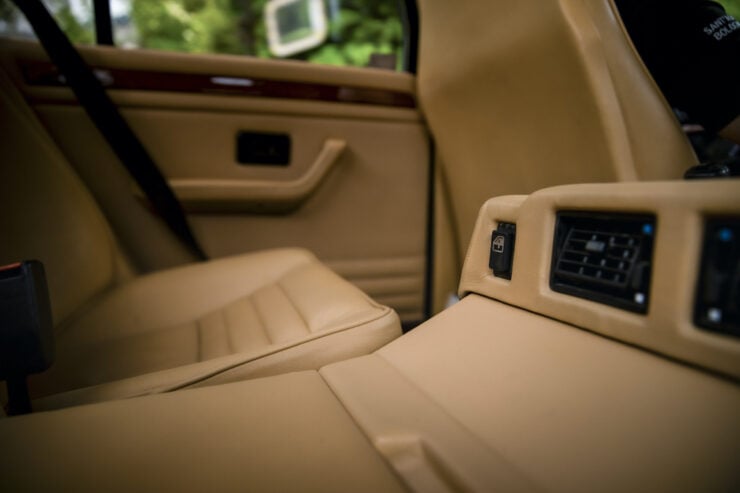 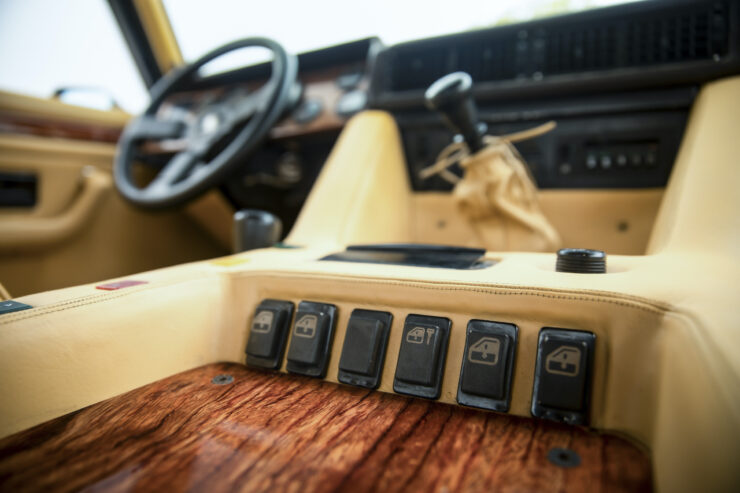 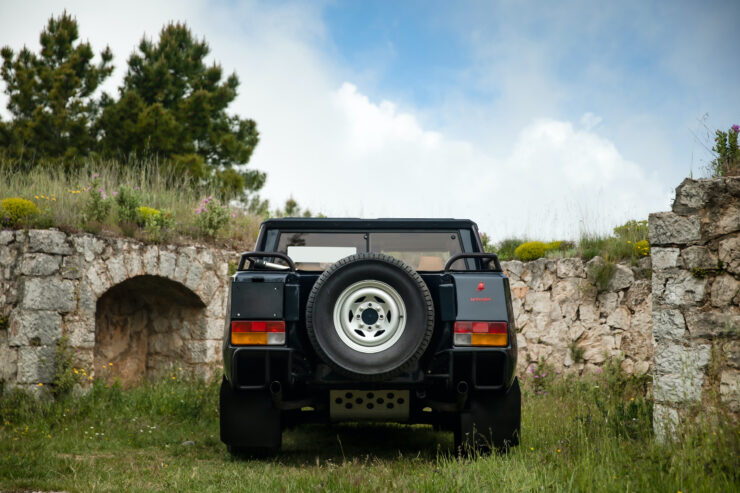 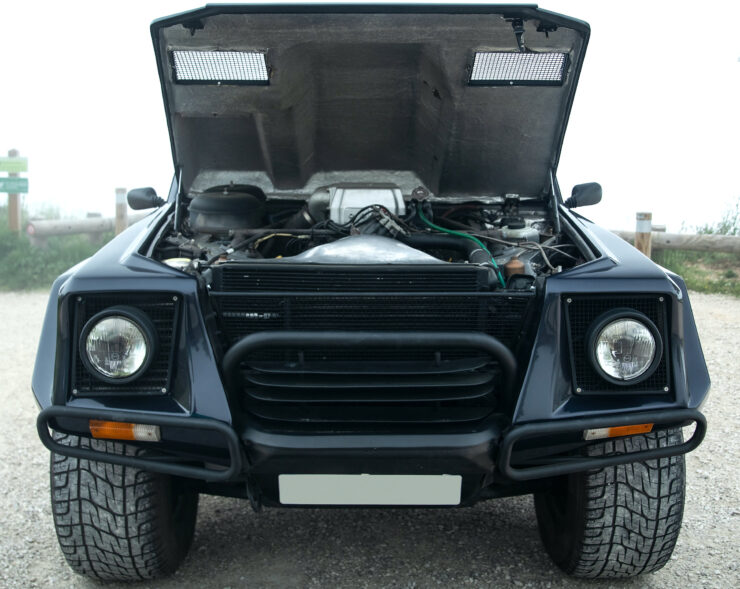 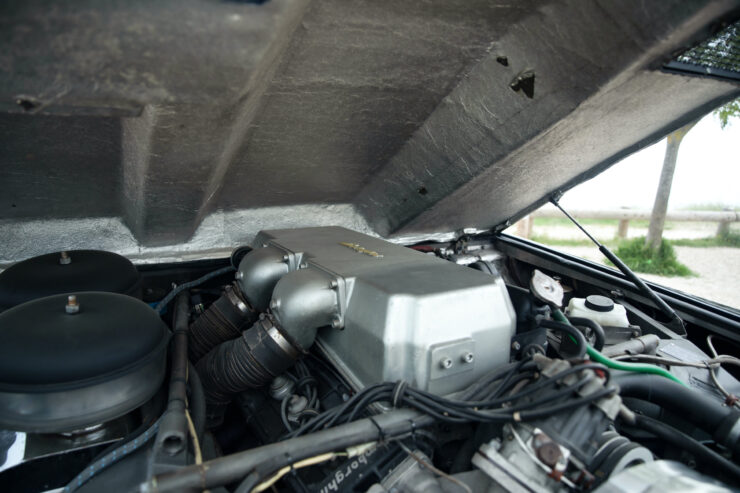 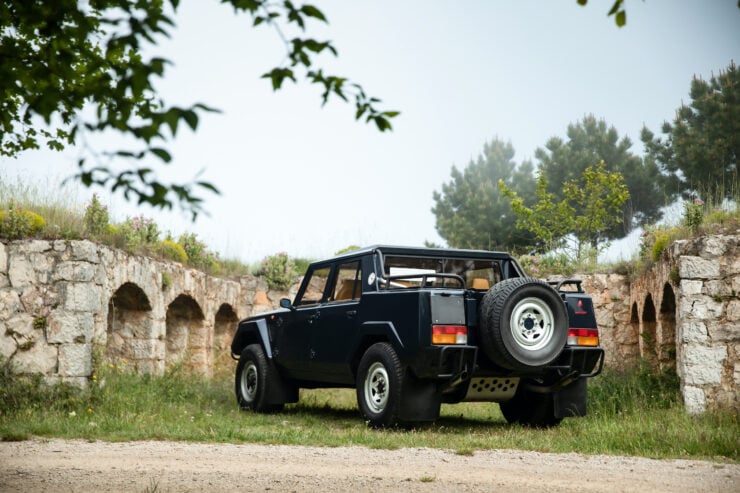