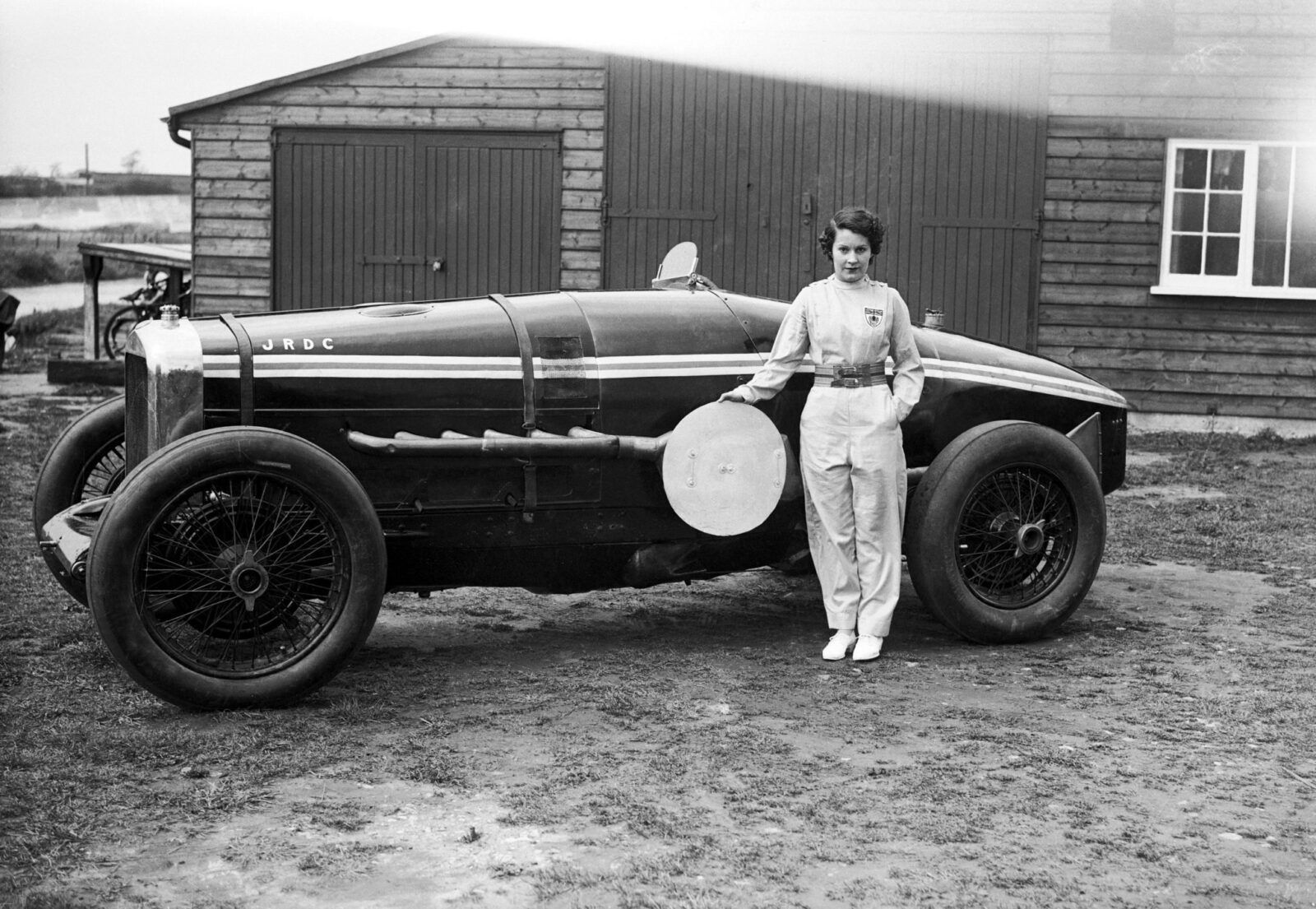 The significant influence had by women on motor racing, especially in the formative years of the sport, has been largely forgotten and even swept under the rug in some instances. It seems like a shame to let this history disappear into the ether, especially when you consider the enormous odds that these ladies had to overcome to even be allowed into a car in the first place – let alone permitted to race shoulder-to-shoulder with men.

This collection of images was provided by the Brooklands Museum, along with a small amount of information of who is in the images and when they were taken. Some of these ladies have a traceable history and some don’t – but we’ve provided as much information as we could gather with each photograph. 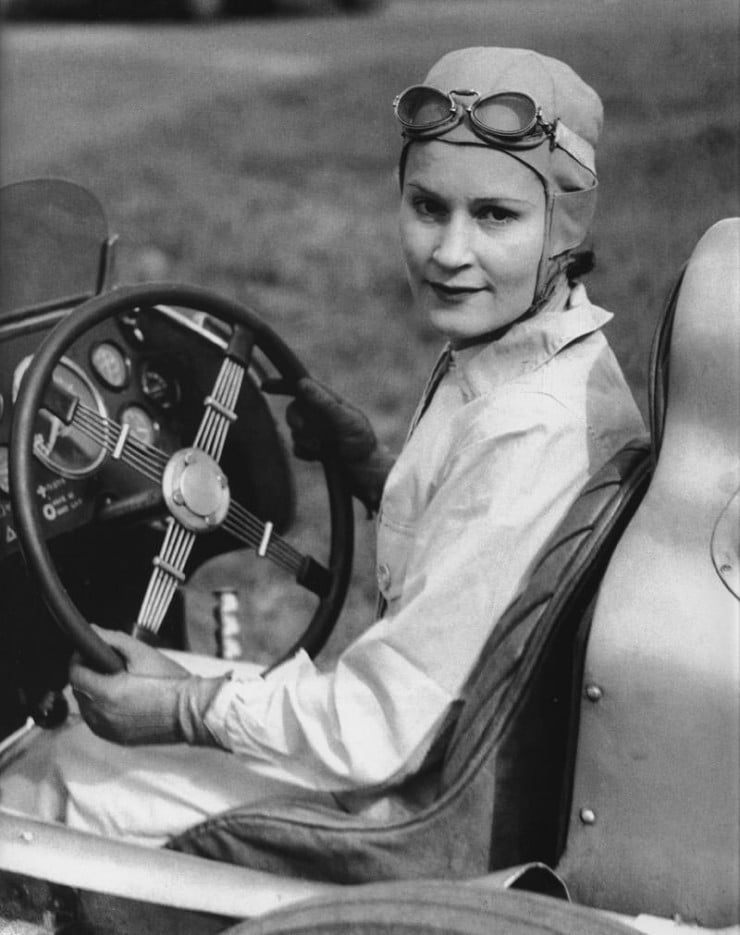 ⇞ This is American-born driver Kay Petre, she was born Kathleen Coad Defries in 1903 and moved to England with her husband Henry Petre in 1930. Kay took an interest in motor racing after being events held at Brooklands, a circuit that also had an airfield where her husband would often fly.

Henry bought Kay her first car for her birthday – a Wolseley Hornet Daytona Special that she landed on the podium in her first two races. By 1933 she was ready for something more and upgraded to a far more capable 2 litre Bugatti. 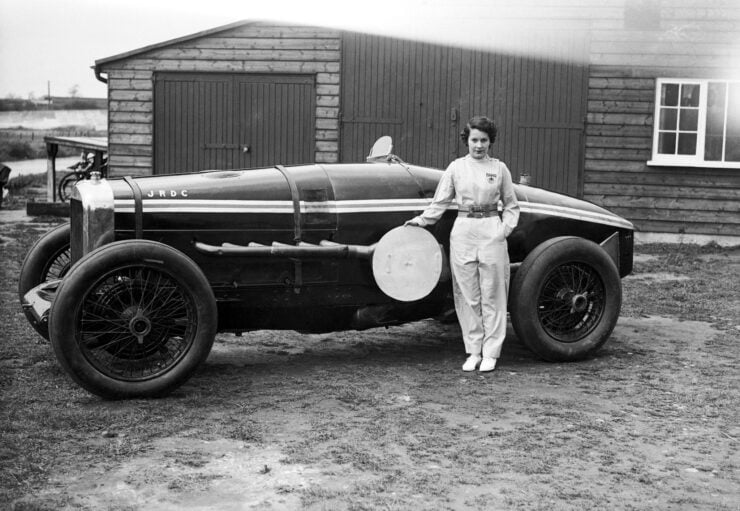 ⇞ The image above is the most famous photograph of Kay, it also features the monstrous 1924 Delage – a 10.5 litre V12-engined Land Speed Record car she had been racing against the menfolk. Due to her relatively demure stature, Kay needed large wooden blocks strapped to the pedals to allow her to operate them. In 1935 she took the Ladies Land Speed Record at 134.75mph in the Delage. 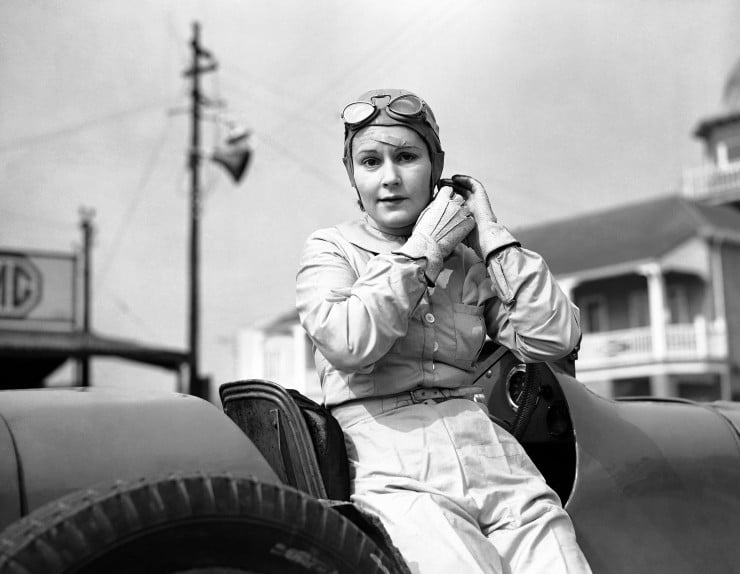 ⇞ This photograph shows Kay Petre when she was recuperating after she had been seriously injured by an out of control car in 1937. She was clipped from behind and lost control at high speed, leaving her pinned under the car and suffering injuries that were very nearly fatal. She didn’t let this stop her however, and she was still racing across Europe in events like the Alpine Rally and the Monte Carlo Rally. After retiring from racing Kay became a motoring journalist and a designer – she created the fabric patterns used on the first Minis. 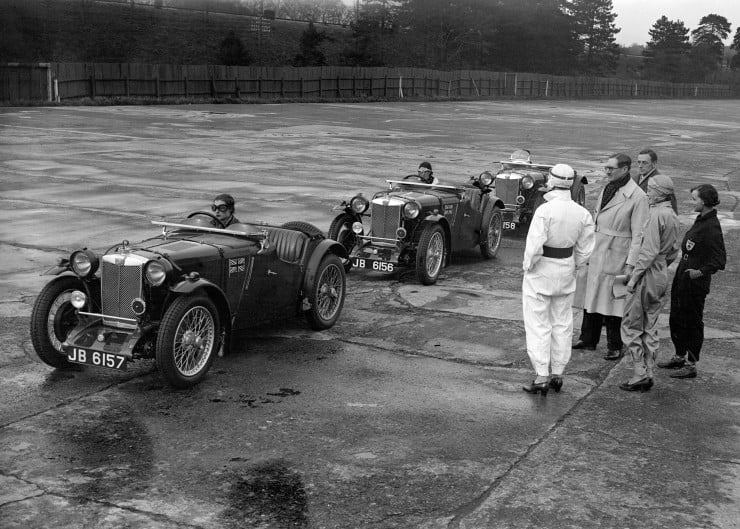 ⇞ These 3 MGs were all piloted by women at Le Mans in 1935, the team was dubbed “The Dancing Daughters” after a popular variety act and the drivers were: Margaret Allen & Coleen Eaton, Doreen Evans & Barbara Skinner, Joan Richmond & Joan Simpson. 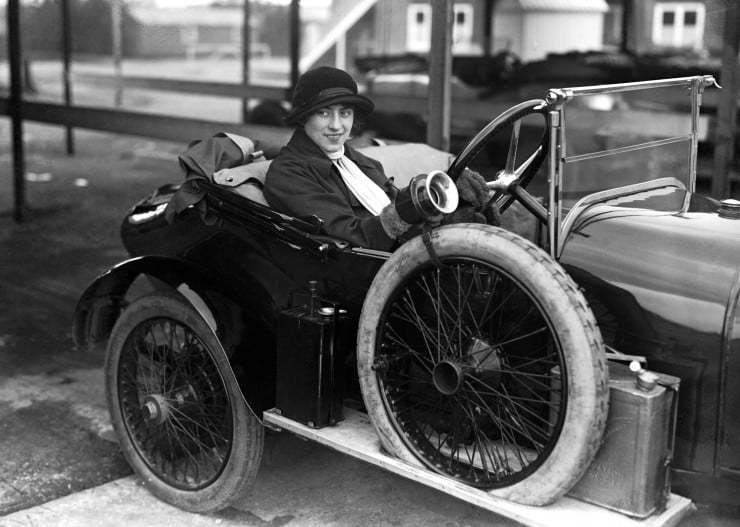 ⇞ This is Violet Cordery in 1930. She won multiple races in her humble little 2.5 litre Invicta and she had to be talked out of racing the 4.5 litre version of the car in reverse around Brooklands – just to see if she could. A year earlier in 1929 Invicta hired Violet and her sister to drive a total distance of 30,000 miles around the track at an average speed of 61.57mph – to prove that the car was reliable. 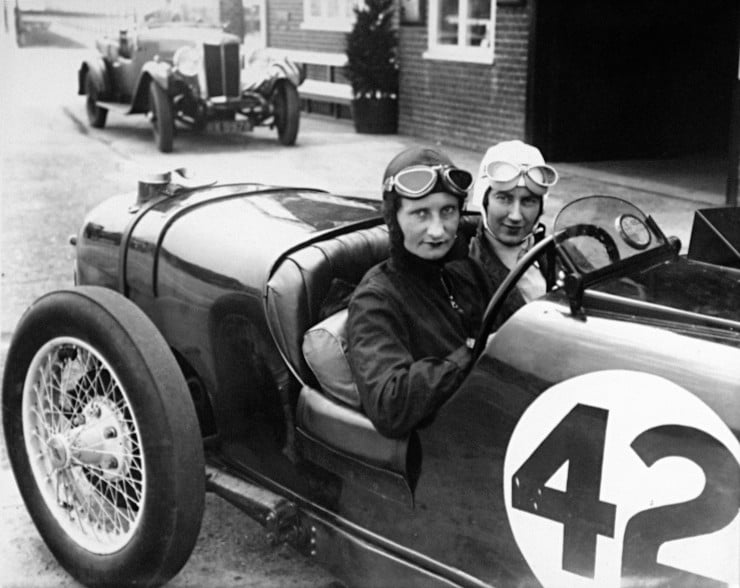 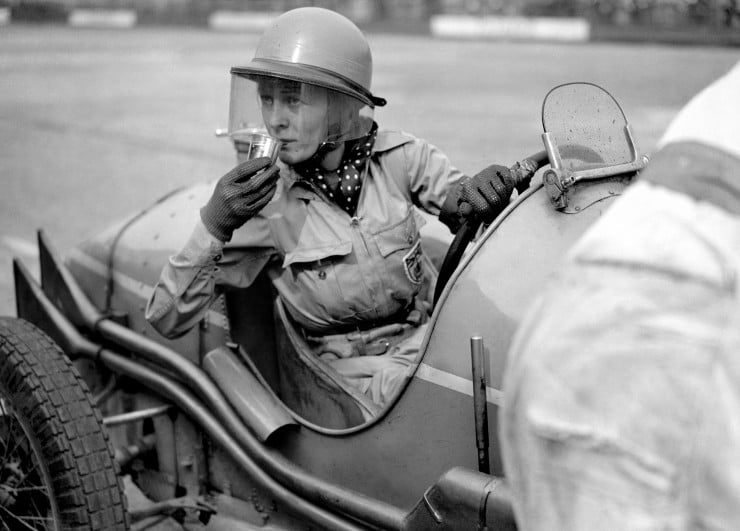 ⇞ Doreen Evans having a sip of tea at Brooklands in July of 1936, she was one of the leading female racing drivers of the 1930s and she came from a family of dedicated racers who owned the Bellevue Garage in Wandsworth. She was also one of “The Dancing Daughters” to race for MG at Le Mans in 1935. 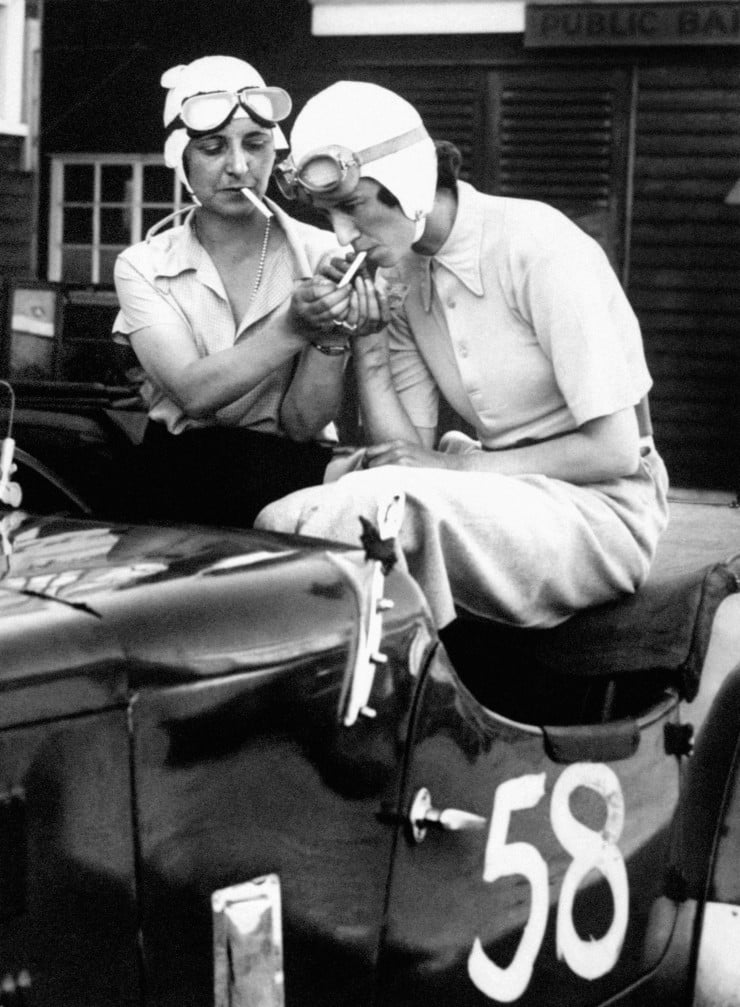 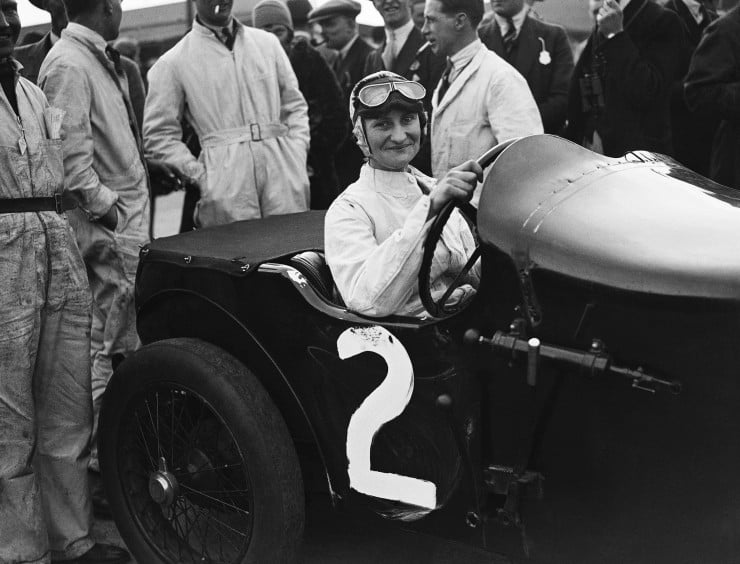 ⇞ Elsie Wisdom in 1930 at Brooklands, Elsie was most famous for mastering the exceptionally difficult to drive 7.2 litre Leyland-Thomas. She won Britain’s first 1000 mile race partnered with Joan Richmond, at an average speed of 84.41mph. 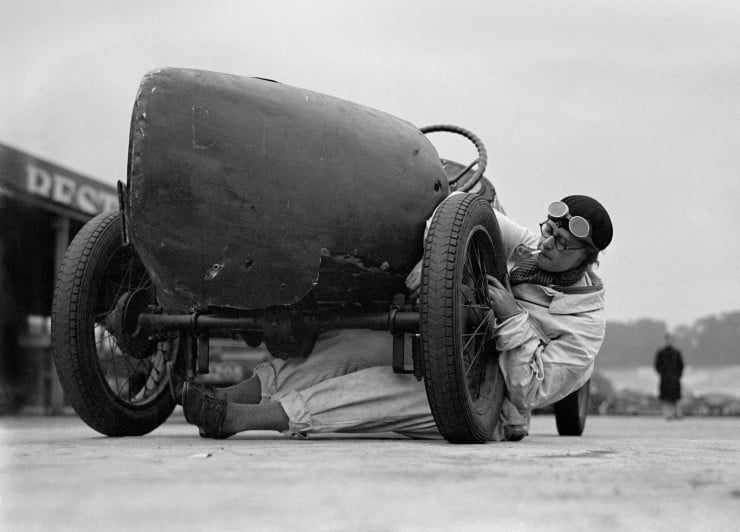 ⇞ Miss J Alwyne – a respected mechanic working on a battered racer at Brooklands in 1931. 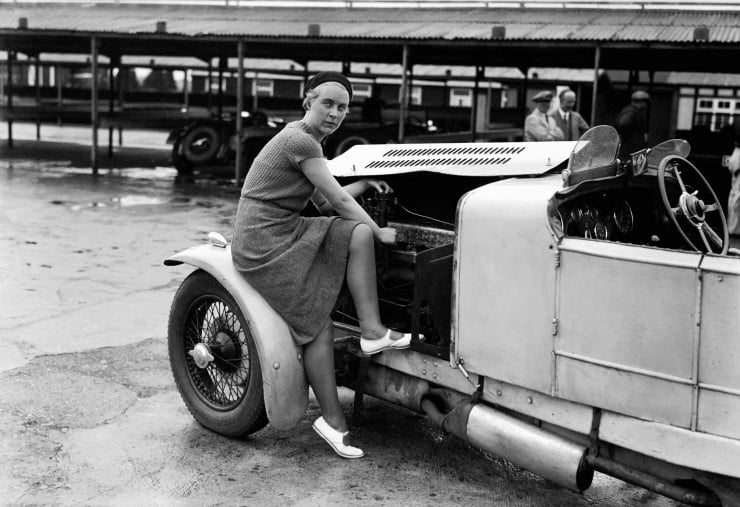 ⇞ Kitty Brunell, a renowned driver and mechanic working on her AC Ace Sports engine. Kitty was the only woman to ever win the British RAC Rally, she used Brooklands to tune her car’s engine and suspension for the demanding rally stages. 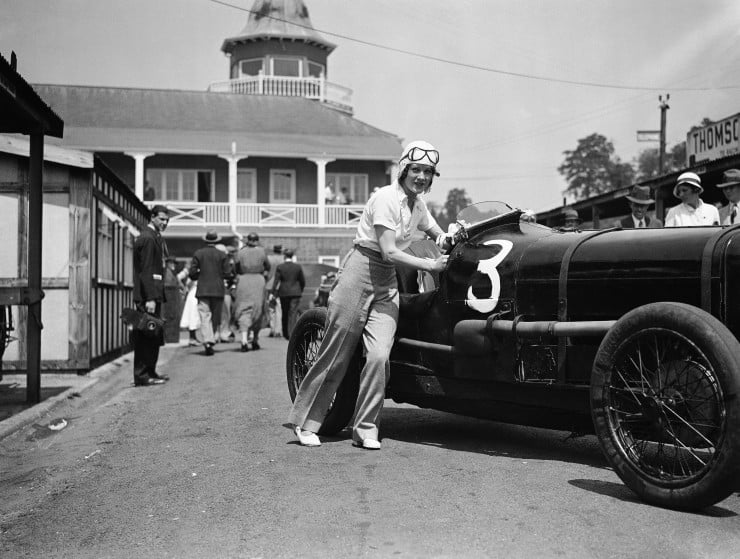 ⇞ Paddy Naismith pushing her car to to the track for a race at Brooklands – June the 5th 1933. 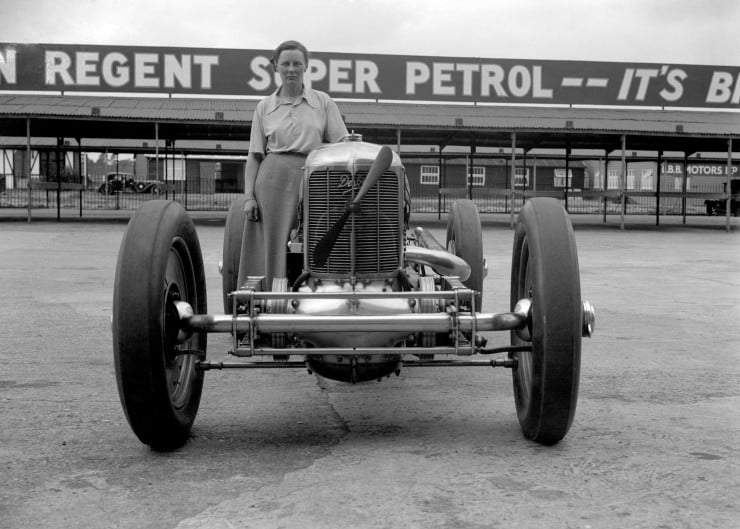 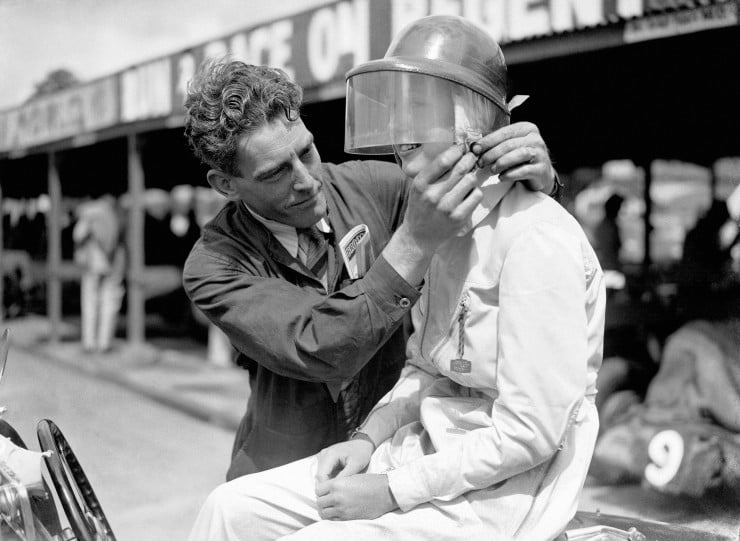 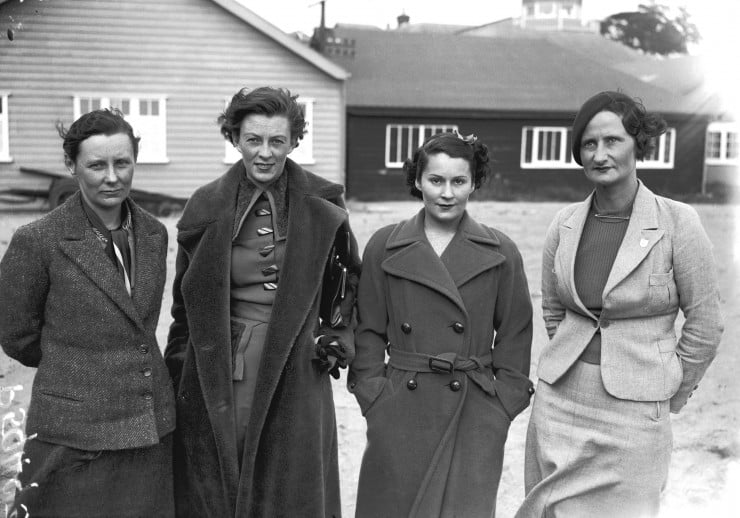 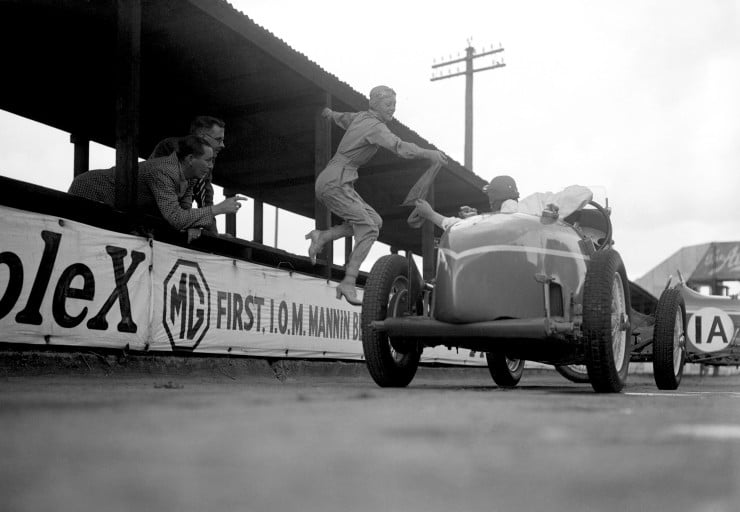 ⇞ Doreen Evans taking over the sash during a relay race at Brooklands in July 1935. 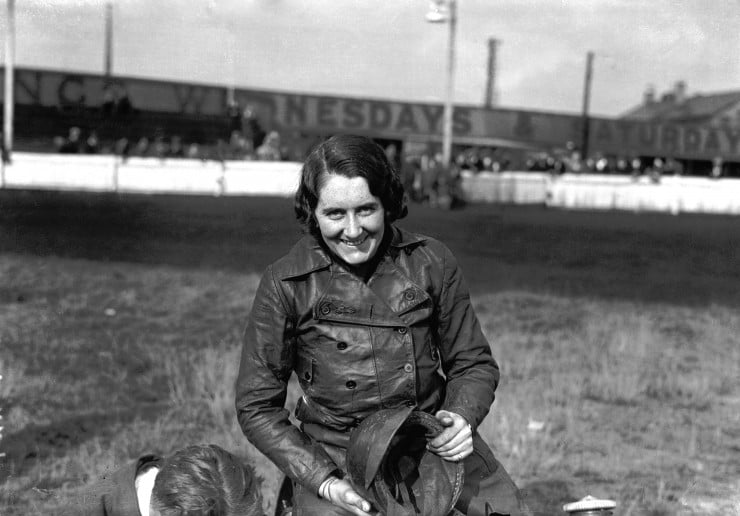 ⇞ Fay Taylour at Brooklands in 1930. She was known as “Flying Fay” and started out as a speedway motorcycle racer, she switched to cars full time in 1930 and she was still racing during the 1950s against drivers like Stirling Moss and Peter Collins. 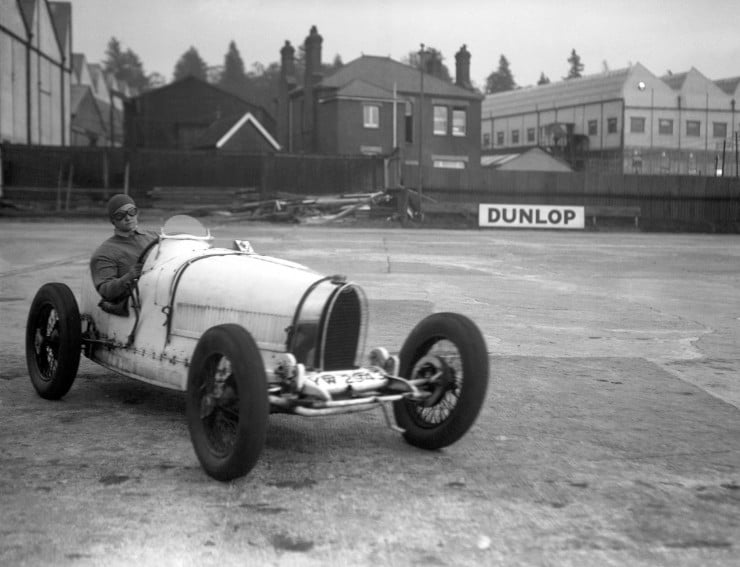 ⇞ Eileen Ellison racing a Bugatti during the Mountain Race at Brooklands in 1934. 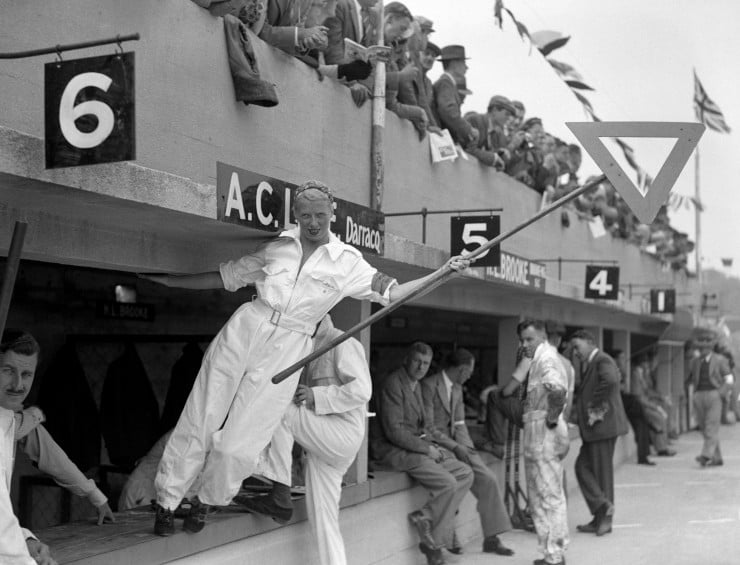 ⇞ Mrs Aclace signals the drivers from the pit lane during the JCC 200 mile race at Brooklands in August 1938. 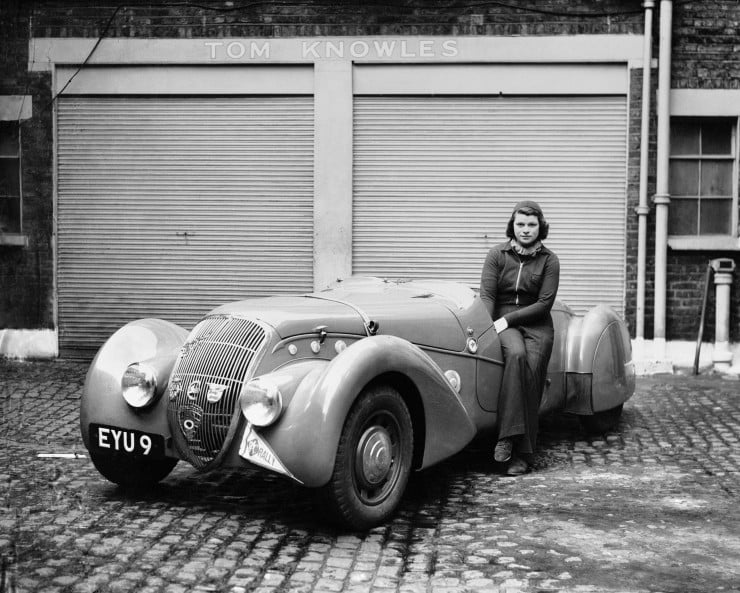 ⇞ Miss Patten, Baroness Dorndorf, leans on her Peugeot in May 1939.

Information via the Brooklands Museum, Flashbak, MotorSport and The Selvedge Yard. 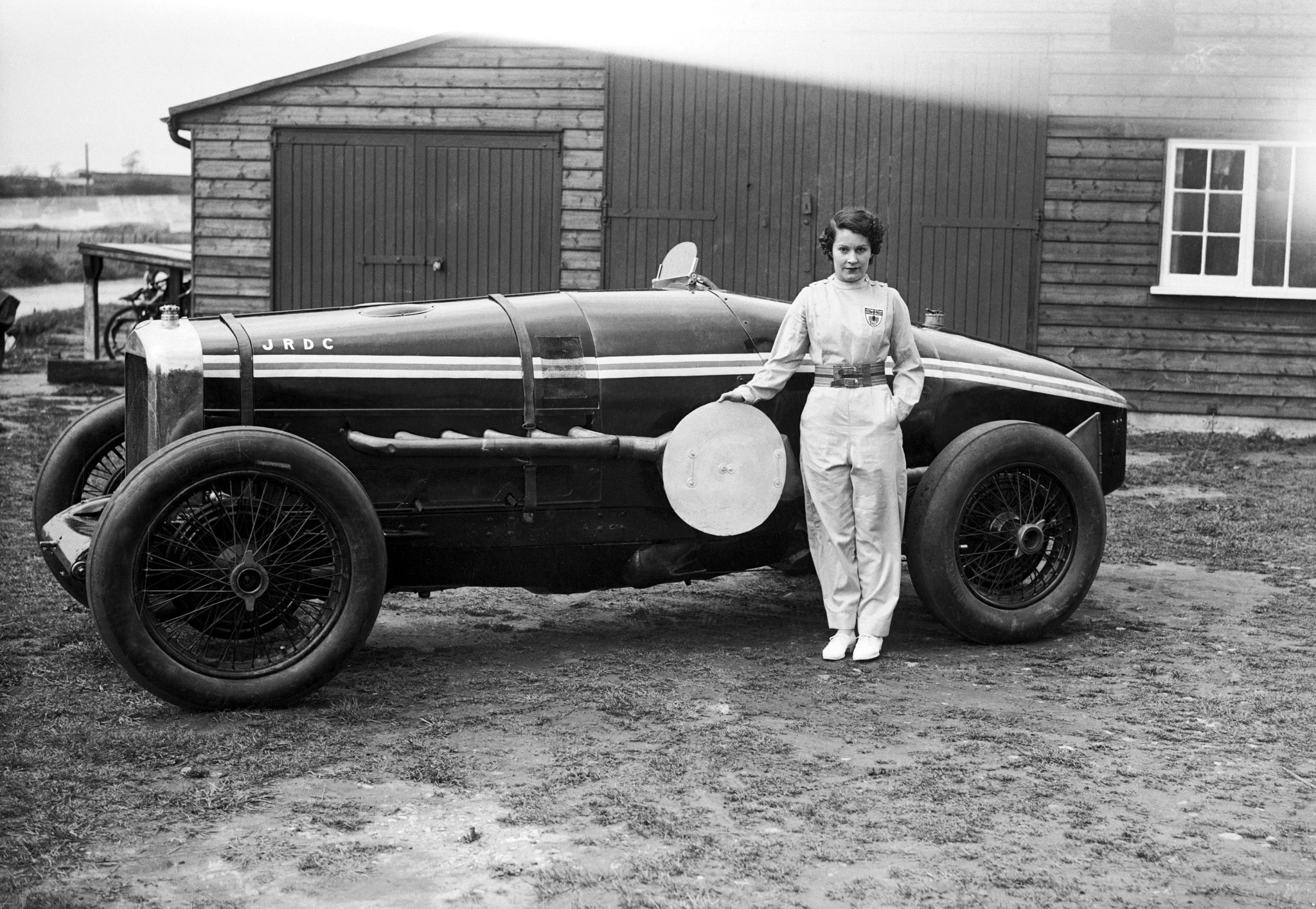 The GSM Dart was one of South Africa’s first production sports cars, it is believed that 116…

As far as ’80s project cars go, they don’t get much more eclectic than this –…

This is 1970 Aston Martin DB6 was ordered new with a Vantage-specification engine, raising power output to…

This Land Rover Defender 110 was a Camel Trophy support vehicle, in the years since…