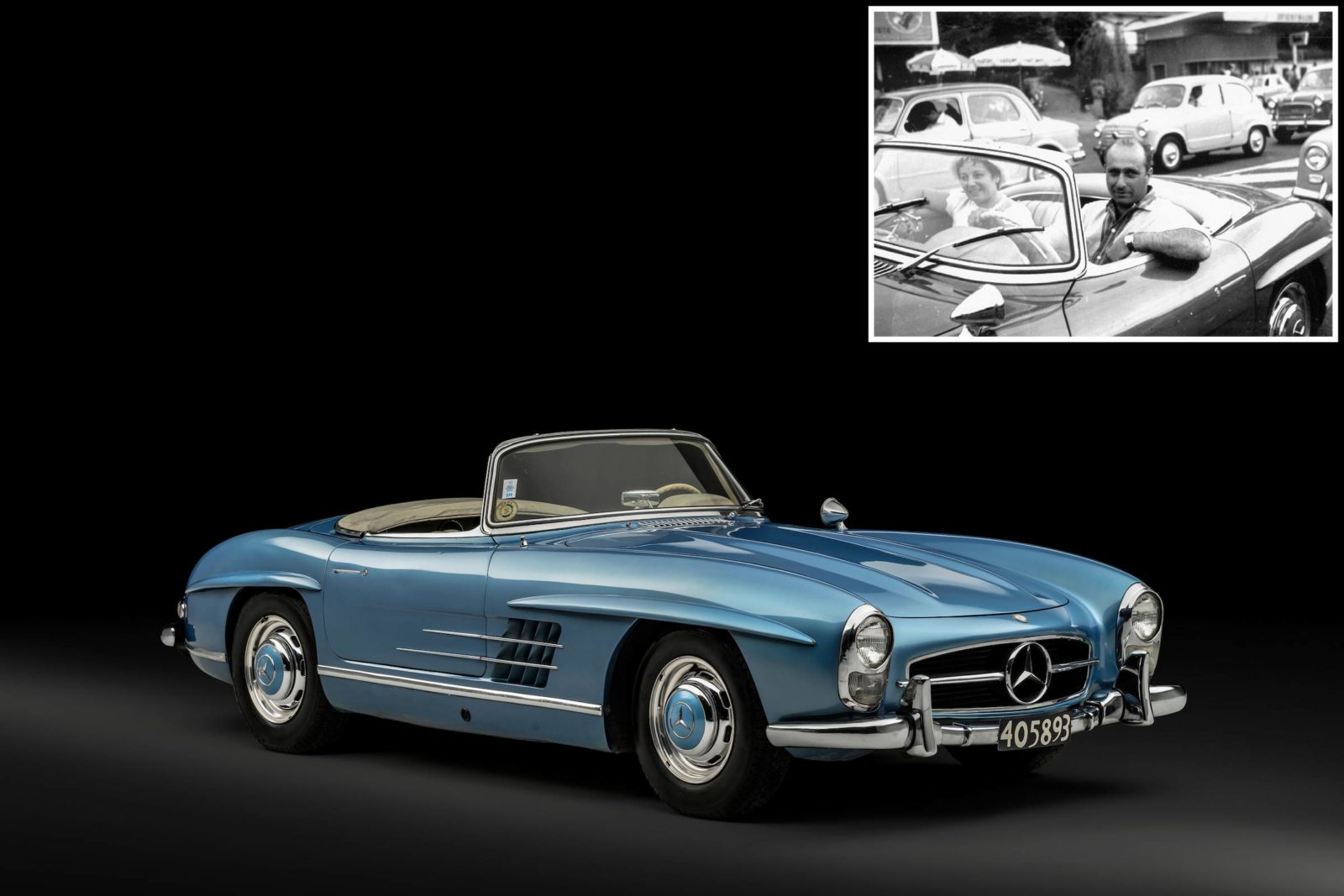 Juan Manuel Fangio is widely regarded as the greatest Grand Prix driver of all time, he won the F1 World Championship five times driving for four different teams in the 1950s. After retiring he became an ambassador for Mercedes-Benz, they gifted him this 300 SL and he drove it over 70,000 km on tours of Europe and South America

Known by many simply as “El Maestro” or “The Master,” Fangio had a motorsport career that defied the odds from the beginning to the end. Though he was already an experienced racing driver he didn’t even turn a wheel in Formula 1 until he was 37, the age at which many drivers are considering hanging up their clogs, and he didn’t retire until the age of 48 – having won the championship the year before in 1957.

Above Video: In this short film you’ll see Fangio arriving at the Modena Autodrome driving this very 300 SL. The onboard camera footage of his laps in the Maserati 250F show him casually drifting it around corners without a care in the world.

Born to Italian immigrant parents on a farm in Balcarce, Argentina, Fangio showed an early interest in both football (soccer) and cars. He was an excellent football player by all accounts and earned himself the nickname “El Chueco” or “The Bow Legged” after his ability to bend his left leg around the ball to shoot on goal from improbable angles.

He would drop out of school at the age of 13, taking a job in an automobile workshop as an assistant mechanic. A few years later he began racing a 1929 Ford Model A that he had rebuilt. He later raced a number of different cars including Chevrolets, and he became the Argentine National Champion in 1940 and 1941.

Over the course of his motorsports career Fangio would compete in endurance rallies, the 24 Hours of Le Mans, the 12 Hours of Sebring, the 24 Hours of Spa, the Mille Miglia, and the Carrera Panamericana – but he’s best remembered today for his exploits in the world of Formula 1 Grand Prix racing. 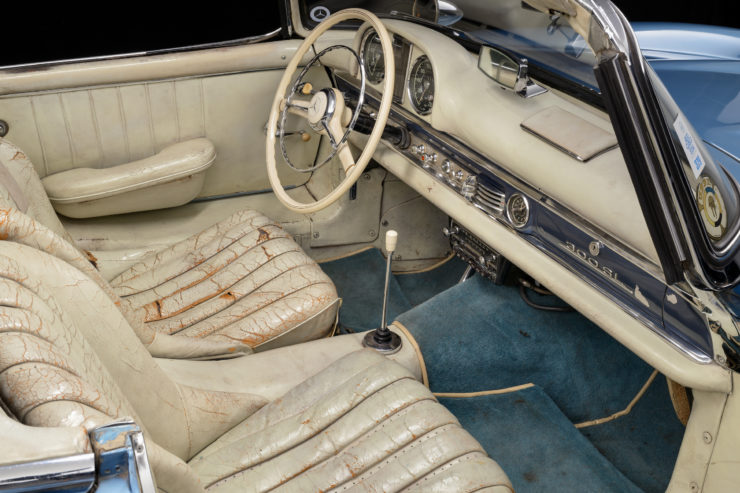 The interior of the car has been carefully preserved from the time of Fangio’s ownership, still showing the natural wear patina from his ownership.

His five World Championship wins stood as a record for 46 years until it was beaten by Michael Schumacher, though Fangio did it driving for four different teams Alfa Romeo, Ferrari, Mercedes-Benz, and Maserati – a feat that has never been repeated.

For much of his life during and after his racing career Fangio held the Argentine Mercedes-Benz concession, selling the cars in his home country and using his status as a living legend to great effect in his role as the President of Mercedes-Benz Argentina.

“Driving fast on the track does not scare me. What scares me is when I drive on the highway I get passed by some idiot who thinks he is Fangio.” – Juan Manuel Fangio

Later in life and well into his 60s Fangio would still drive display laps at major motor racing events in his old Grand Prix cars, he was known for driving them hard when in display races with other drivers. Ultimately Fangio lived to the age of 84, passing away in Buenos Aires in 1995 before being laid to rest in his old hometown of Balcarce.

When Mercedes-Benz gifted this 1958 300 SL Roadster to Fangio in London he departed on an extensive tour of Europe in the car shortly after – before importing it back into Argentina as a “trophy” to avoid paying exorbitant import taxes on it. 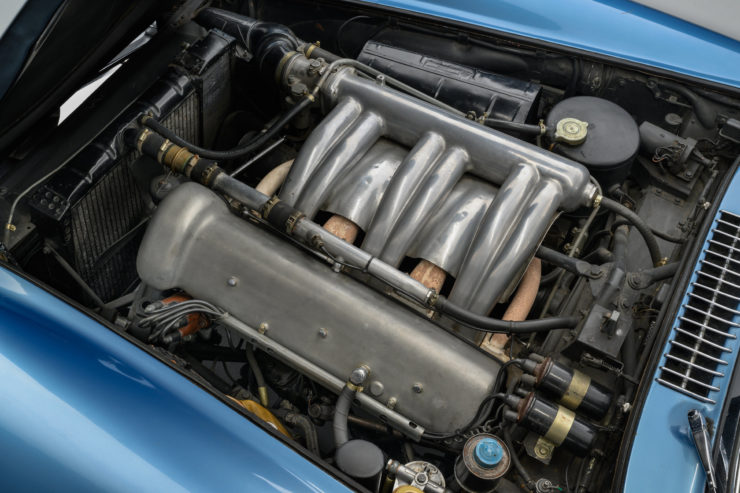 The car still has its original matching numbers engine, as well as the original body, chassis, differential, gearbox, hardtop, and hood frame.

Though he had a number of cars, Fangio was known to treasure this one in particular. After his tour of Europe in it he toured South America, then kept it in pride of place in his collection using it in his day to day life as well as for major events.

When fellow Argentinian Silvana Suárez was crowned “Miss World” in 1978 she paraded through the streets sat atop the rear seats of this car with Fangio at the wheel.

The car would later find its way into the Juan Manuel Fangio Museum in his hometown of Balcarce, and it’s from here that the car is now being offered for sale by RM Sotheby’s.

The car is due to cross the auction block in Switzerland in early March and at the time of writing there’s no price guide, however it’s likely safe to say that this could very well become the most expensive Mercedes-Benz 300 SL Roadster in the world. 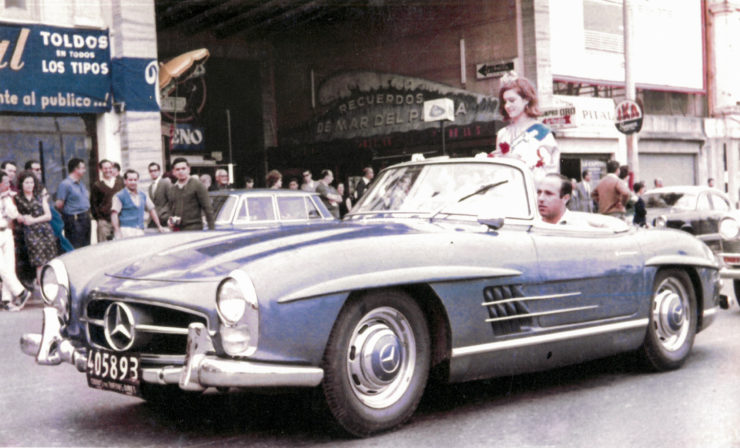 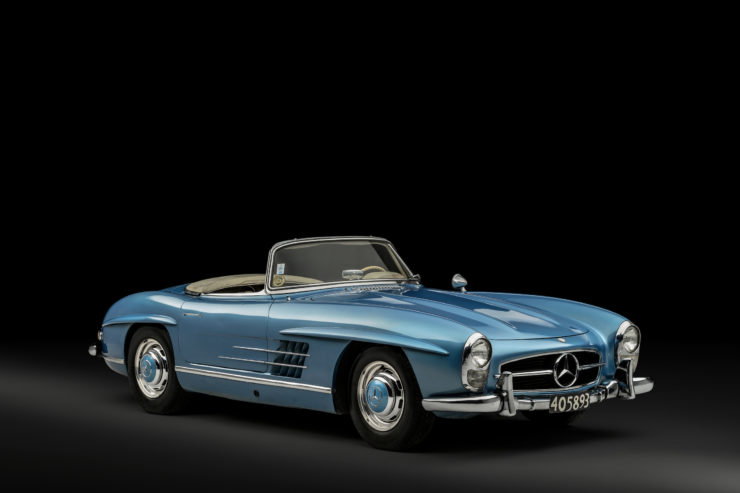 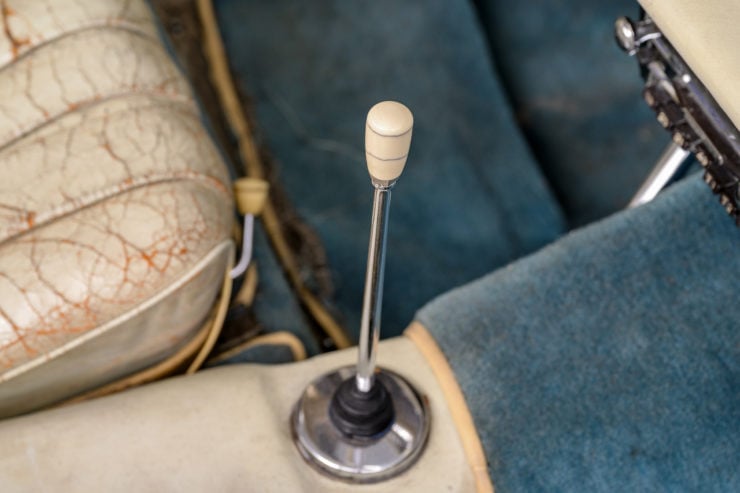 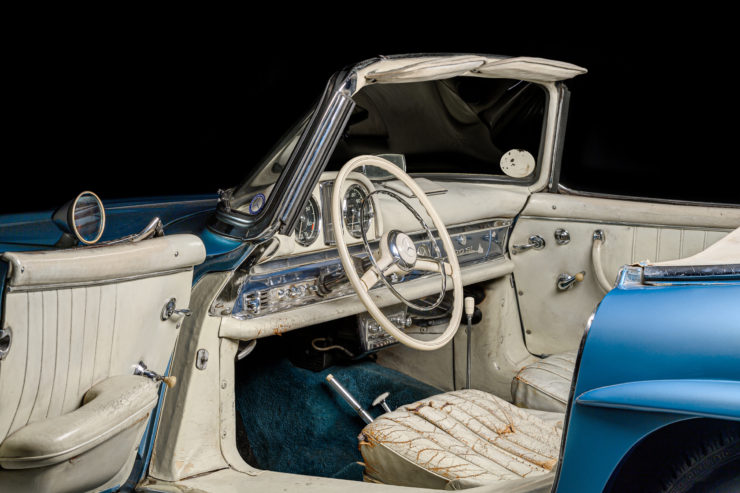 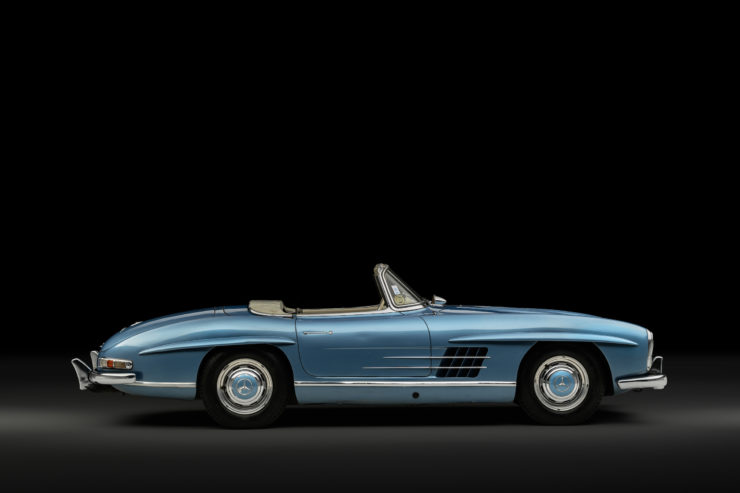 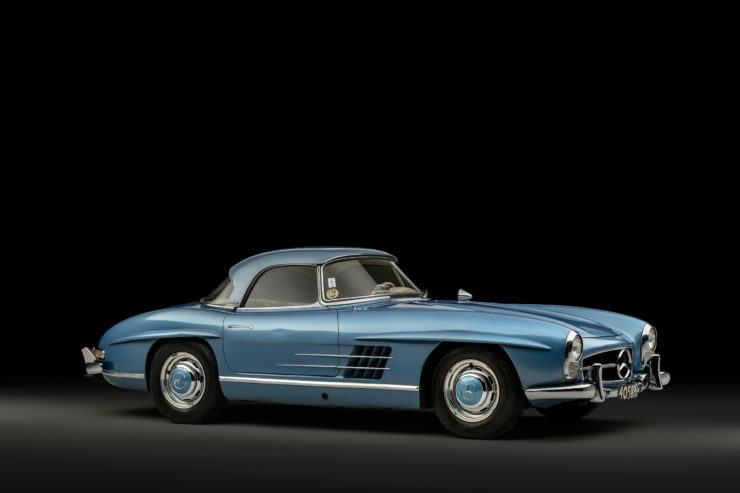 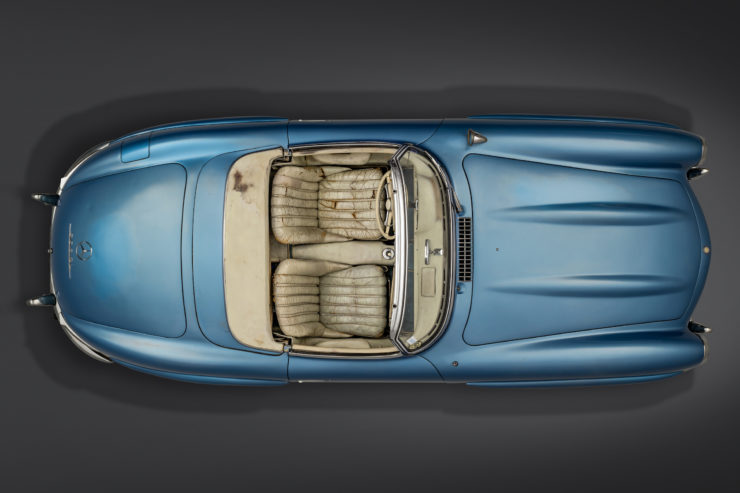 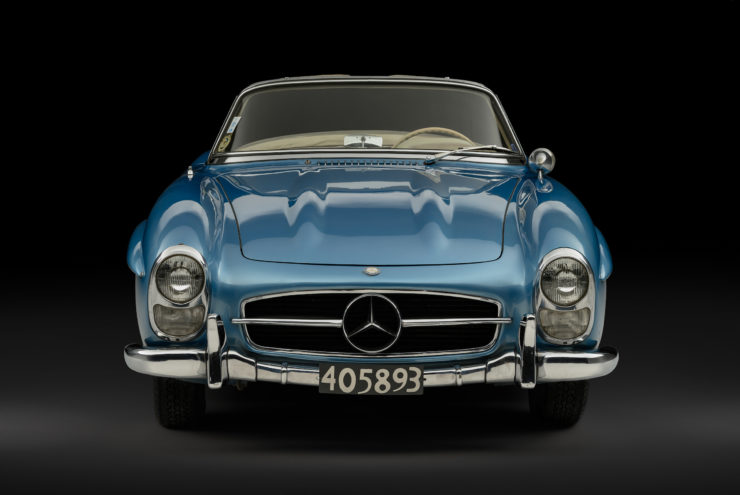 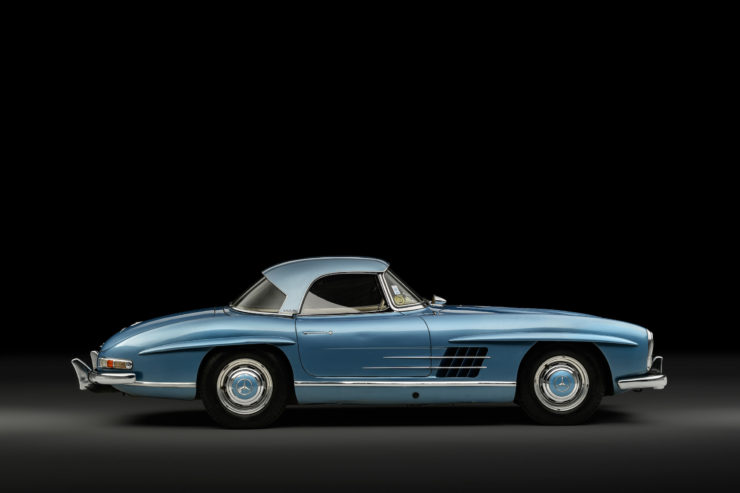 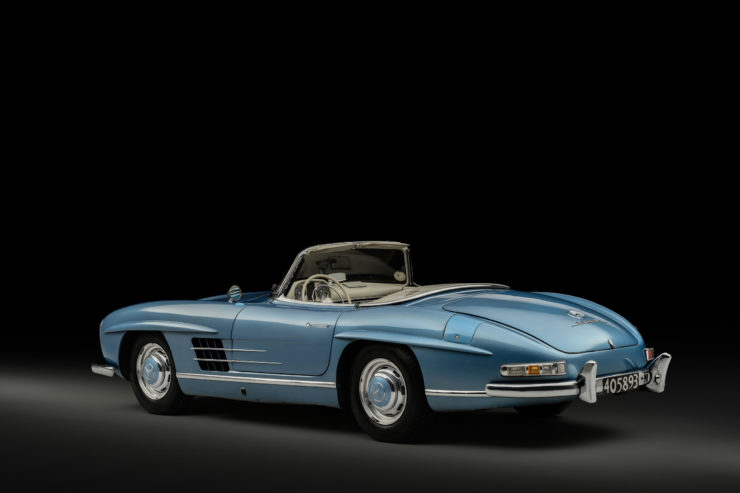 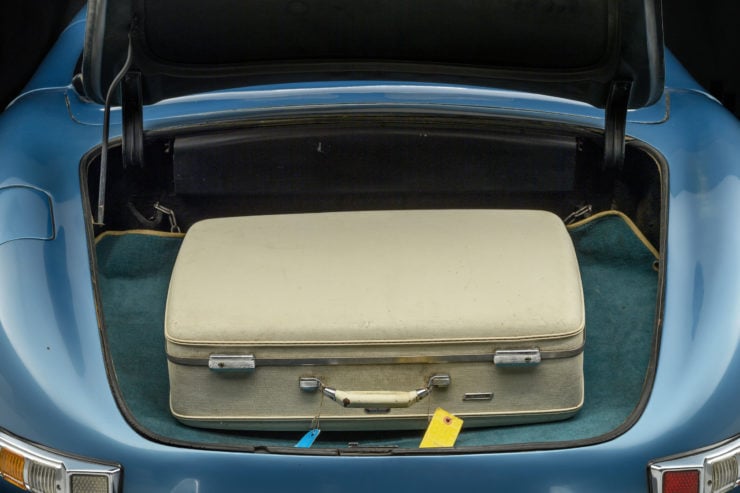 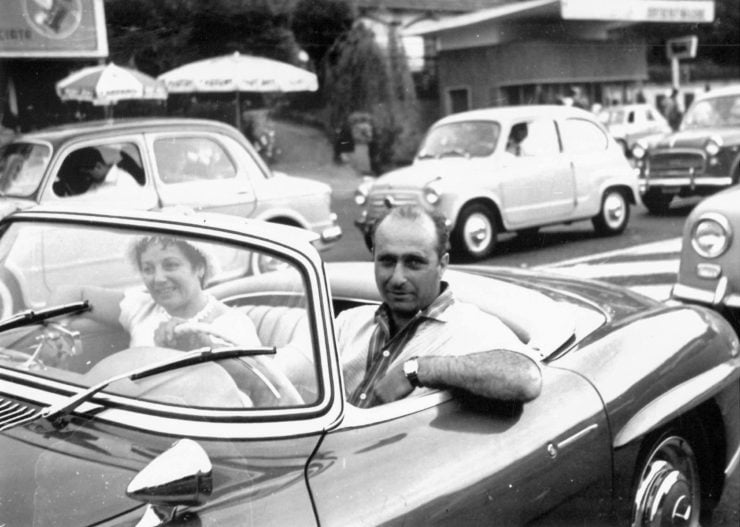