This Lohr Fardier 4×4 was bought by John DeLorean in the late 1970s as he worked on the DeLorean DMC-44 project – a small, lightweight 4×4 that he intended as a production vehicle for farmers, search and rescue crews, forestry workers, and other industrial/agricultural applications.

His most famous creation was the DeLorean DMC-12, with its iconic gullwing doors and prominent inclusion in Back to the Future as a time machine, but he was working on a whole range of vehicles including the DMC-44 (or DMC-4×4) that never saw the light of day.

The Lohr Fardier was developed by Lohr Industrie in the 1970s specifically for military use, first by the French armed forces and later by the militaries of Argentina, Spain, and Tunisia.

Above Video: This is the promotional film made by DeLorean in the late 1970s for the DMC-44. The vehicle used in the film is a Lohr Fardier that has been lightly disguised. It’s highly likely that it’s the same exact Fardier shown in this article, before its restoration.

The design of the Fardier is somewhat reminiscent of the M274 Mule 1/2 Ton 4×4 that was built in the USA from 1956 onwards. The M274 is a small 4×4 with a flat top and a forward driving position designed for military use.

The Fardier was given a tubular steel frame, a mid-mounted 602cc flat twin engine sourced from a Citroen 2CV, a flat cargo area up top, a roll hoop, and a forward driving position. It has coil spring suspension at all four corners as well as inboard four wheel disc brakes, and the FL501 version could tow up to 800 kilograms.

The top speed of the Fardier was just 35 km/h, however this was more than enough for most military applications. It’s known that at least a few hundred examples of the Fardier were built but it’s not known how many remain, they now come up for sale relatively rarely outside of France.

The DeLorean DMC-44 project was intended to be put into production alongside the much more famous gullwing DeLorean DMC-12. The DMC-44 was targeted at a completely different market however, it was planned to sell into the then-$4 billion dollar 4×4 and ATV industry in the USA.

Had the DeLorean DMC-44 ever made it into production it might just have turned the fledgling company’s fortunes around. Today there are countless vehicles of this type, like the John Deere Gator and the multitude of large 4×4 quad bikes often used by farmers. 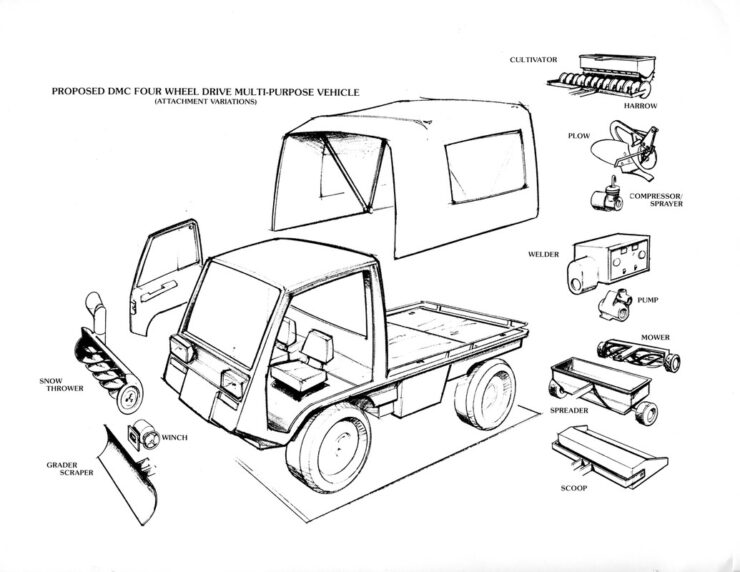 The DeLorean DMC-44 was designed to have a centrally-mounted engine, four wheel drive, and front and rear power take offs for running a wide variety if agricultural and industrial equipment. Image courtesy of the DeLorean Museum.

DeLorean hired J.D. Power and Associates to do market research for them in period, and the full report is available to read here on the DeLorean Museum website.

It does seem that if the company had succeeded in getting a production version of the DMC-44 out the door at the proposed price point it may very well have found a lucrative market.

The vehicle you see here is one of those historically significant “what ifs,” as noted above it was bought by DeLorean specifically to study its feasibility.

Interestingly it seems likely that DeLorean bought it as military surplus from the French Foreign Legion, as FFLA livery and paint colors were found during the restoration process.

After testing and filming was completed in California the vehicle was sent to the Lamington Farms Estate in Bedminster, New Jersey – now the site of the Trump International Golf Course. Oldwick Garage was commissioned to perform repairs but after DeLorean’s death the garage took ownership in lieu of payment.

A full restoration was undertaken in 2018 and the vehicle now presents in almost as-new condition. It’s being offered for sale out of Morgantown, Pennsylvania on eBay with a Buy It Now price of $28,900 USD. 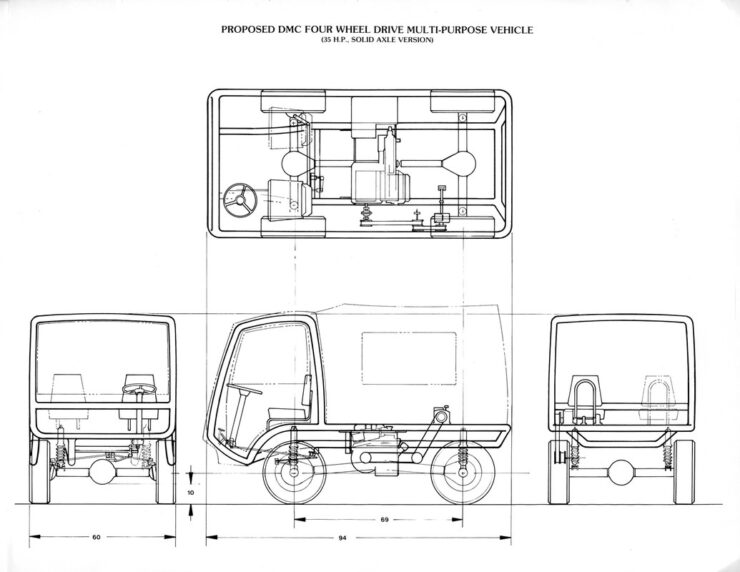 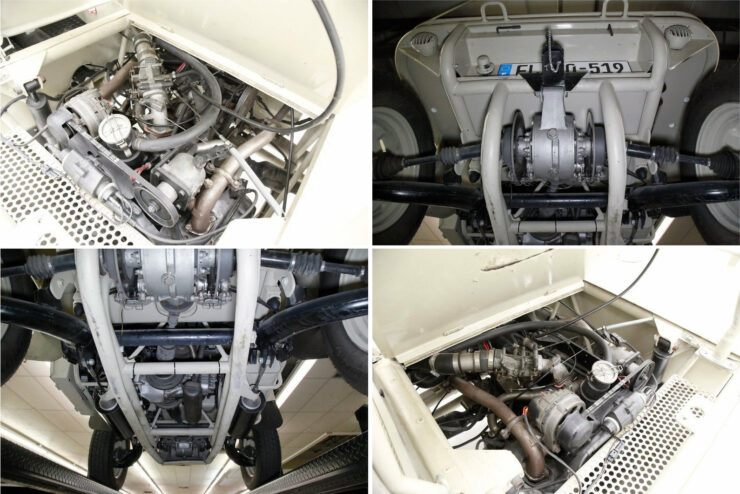 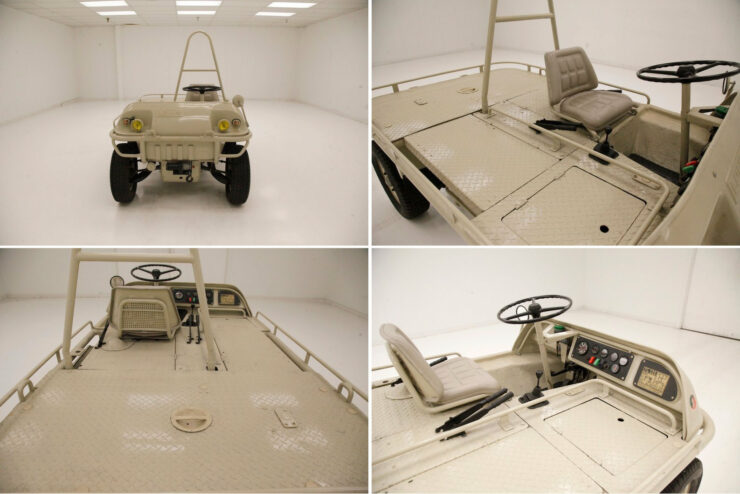 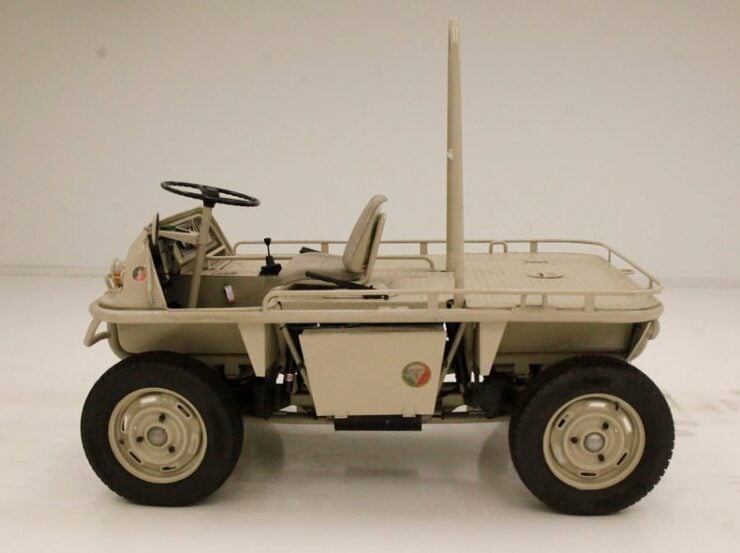 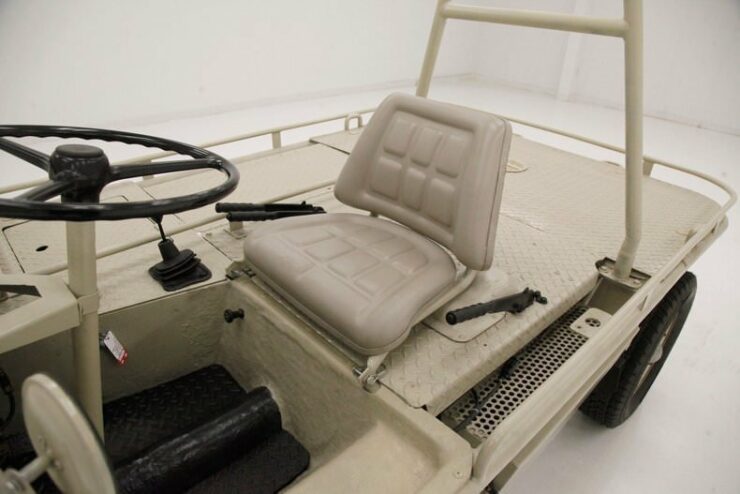 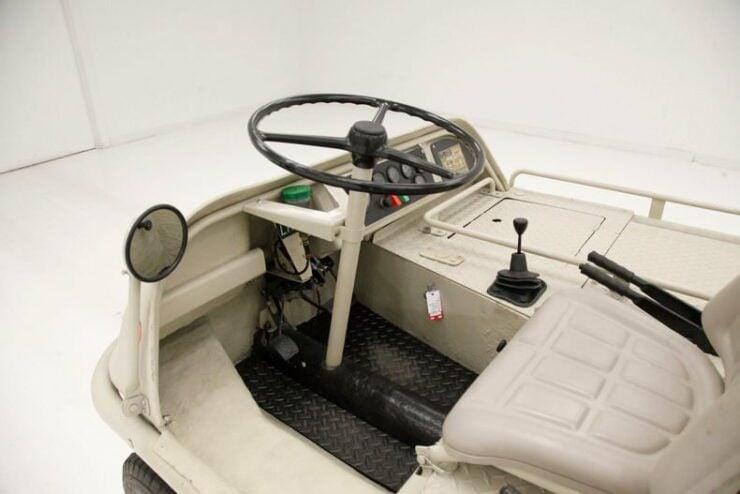 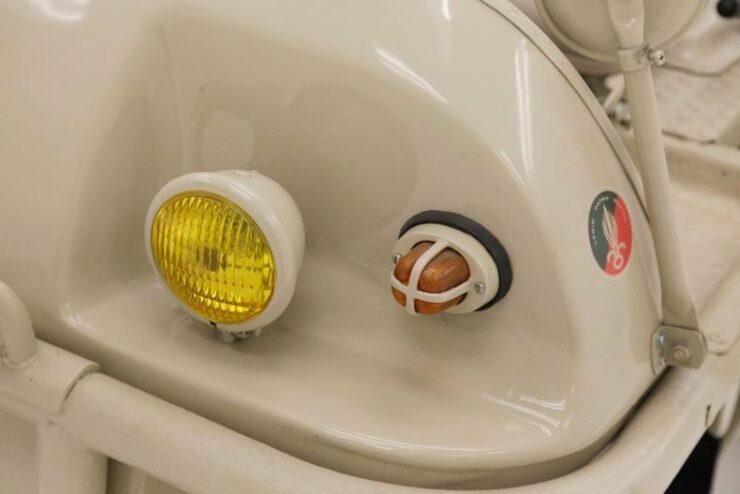 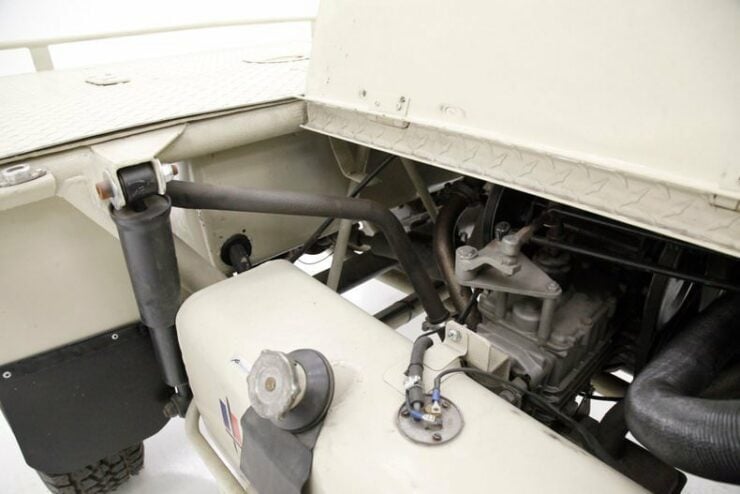 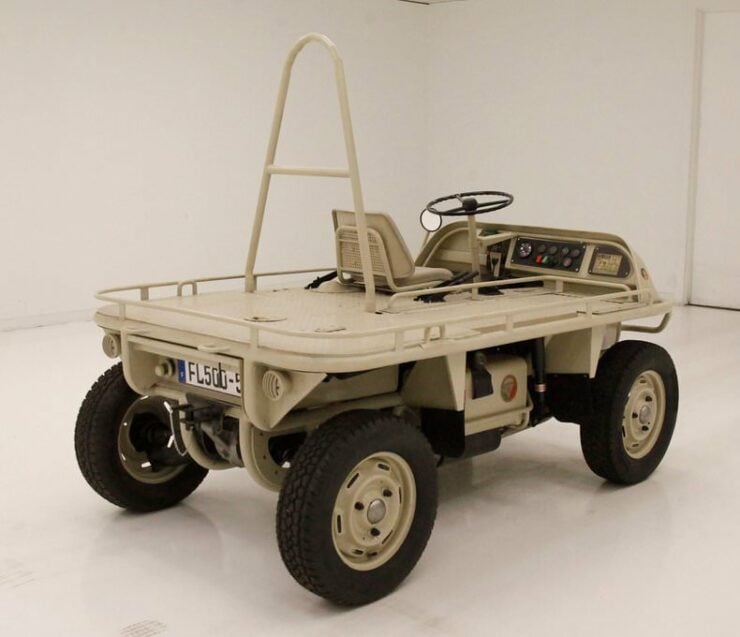 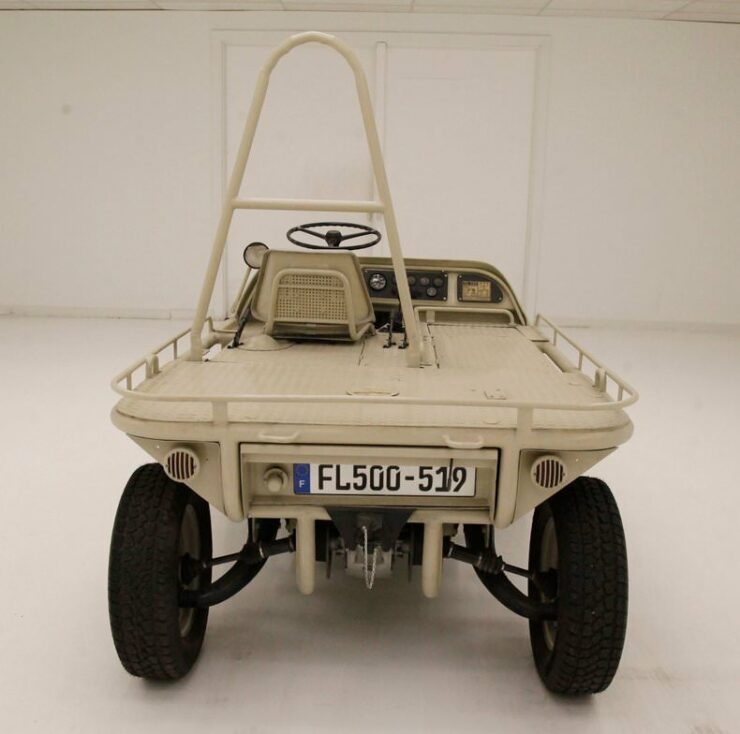 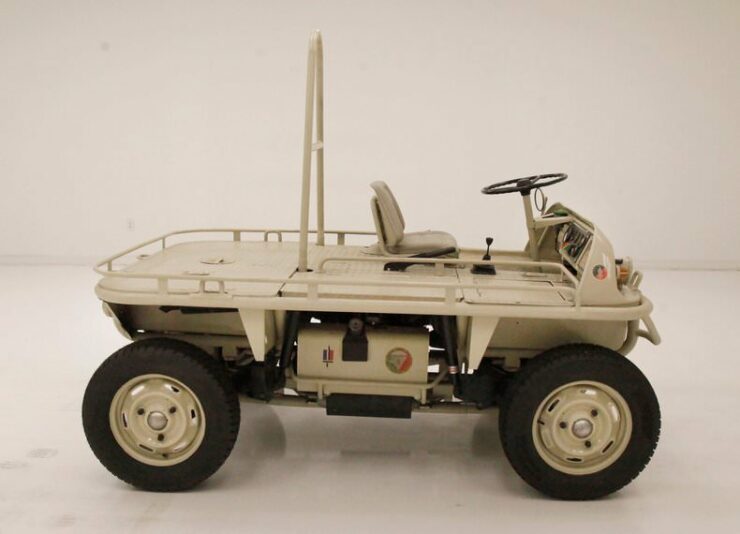 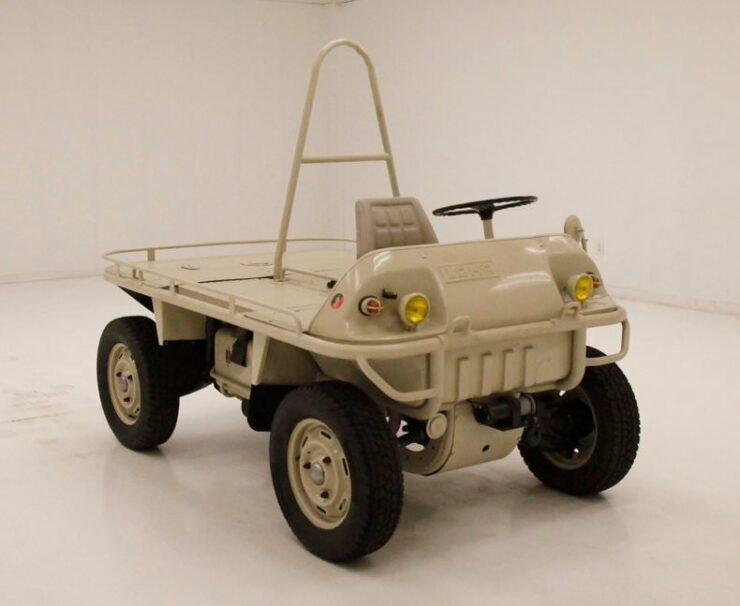 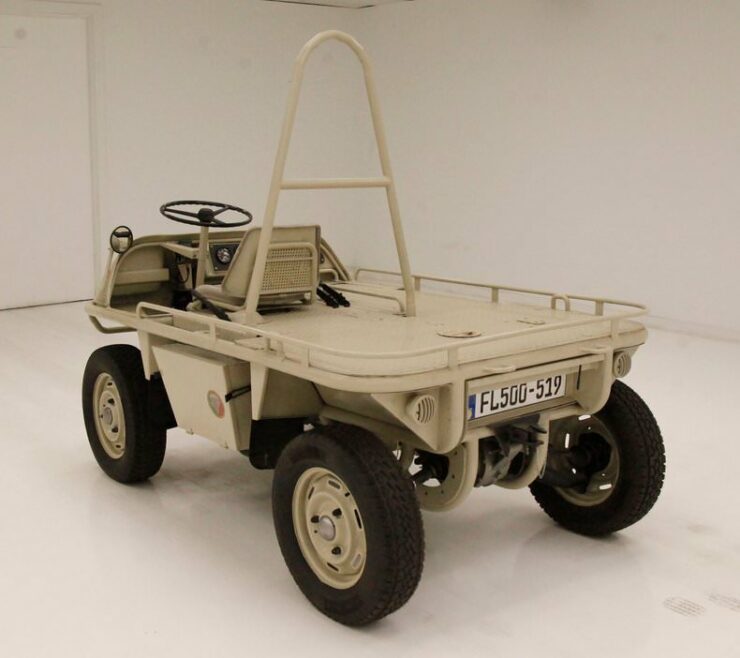