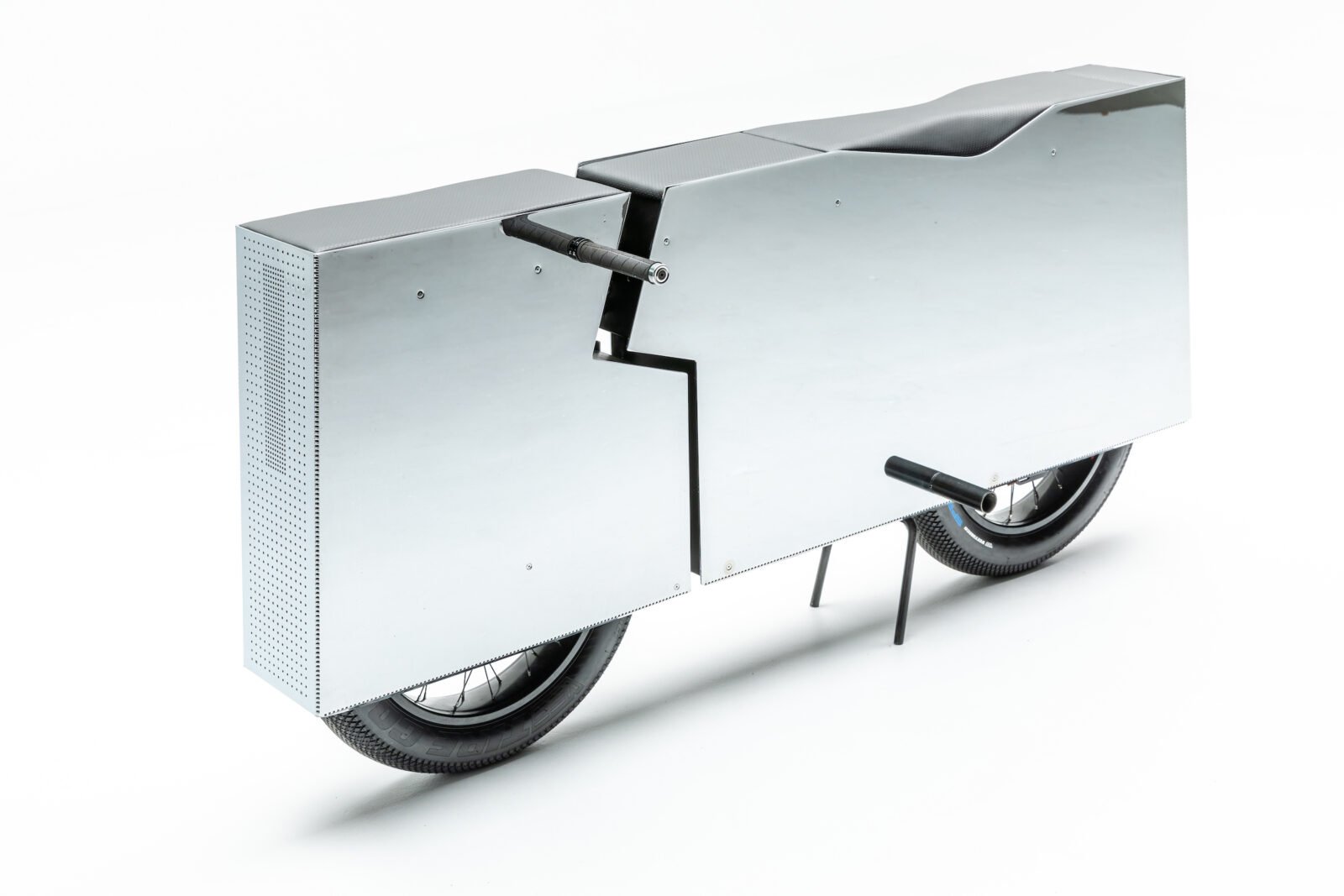 Moto Undone is a bespoke electric motorcycle developed by Joey Ruiter and the team at jruiter I.D. with the very specific goal of creating an entirely new motorcycle design with no references to any other motorcycle ever made.

The plan was to strip away almost everything that makes a motorcycle a motorcycle and instead use a mirrored box that seems to almost disappear when the motorcycle is underway, giving the illusion of a person riding along in mid air.

Under the highly-polished metal skin the motorcycle is powered by a 1500w 48v electric rear hub motor capable of approximately 30 mph (48 km/h) with a range of 90 miles (145 kms) in total. Charging is done using a standard outlet but there’s no additional information at hand about what battery pack is used, what its capacity is, or how long charging takes.

None of that really matters though as this isn’t a production-ready or production-intended motorcycle, it’s a work of modern art. 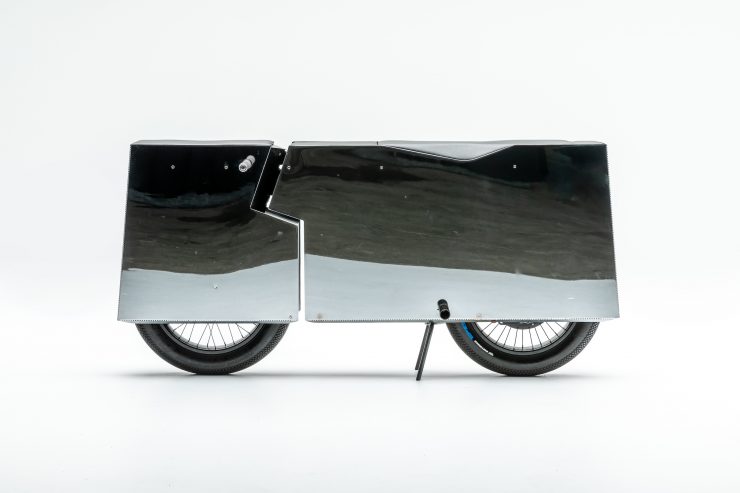 As motorcyclists we spend an inordinate amount of time trying to make sure we’re as visible as possible to other motorists, as they have a propensity for suffering from a form of blindness that renders motorcycles and bicycles invisible under certain circumstances. The Moto Undone concept bike is fascinating as it flies in the face of this, making the motorcycle almost entirely invisible.

The Moto Undone is a fully rideable motorcycle, it has an almost lighting bolt-like gap near the front to allow the front wheel to be turned, and there are handlebars, a low profile seat, and foot pegs – there’s even a centre stand. Balloon tires are fitted to spoked wheels, and there are brake levers discreetly poking through the reflective bodywork up near the handlebars.

The entire top part of the bike is padded/upholstered and there’s a distinct seat section with slight cutaways to allow the rider’s legs to comfortably hang over the sides. 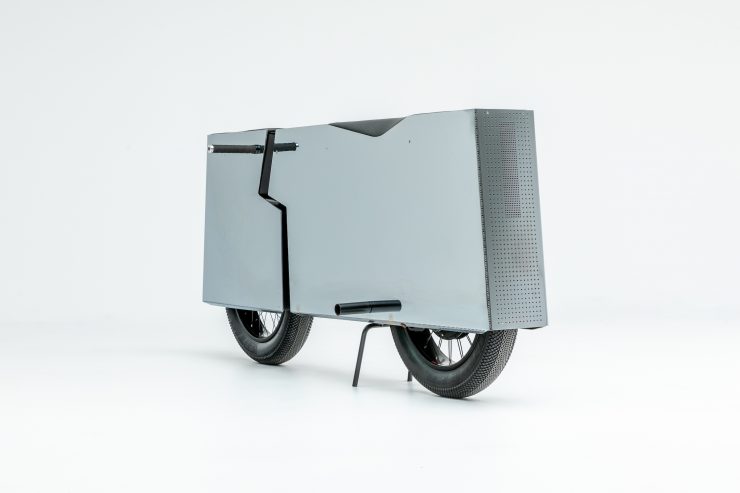 Joey Ruiter explains his creation below:

From the familiar to the unexpected, MOTO UNDONE ignores what makes motorcycles interesting.

At jruiter I.D. we want to re-set the definition of a motorbike by stripping away historical attributes that make them so great. It’s hard to image a motorcycle without fancy paint, overpowered motors, exposed mechanical genius, and sweet exhaust tones.

There motorbike references are small and when someone is riding they are all you see. The bike almost disappears. The rider just floats along the streets silently.

Powered by a 1500w 48v electric hub motor, MOTO UNDONE has a range of 90 miles or about 3 hours. All gauges and riding information, like speed and gps, is displayed through smart phones by downloadable apps.

If you’d like to see the Moto Undone in person you can visit the Petersen Automotive Museum in LA as part of the Electric Revolution exhibit from April the 6th, curated by Paul d’Orleans. 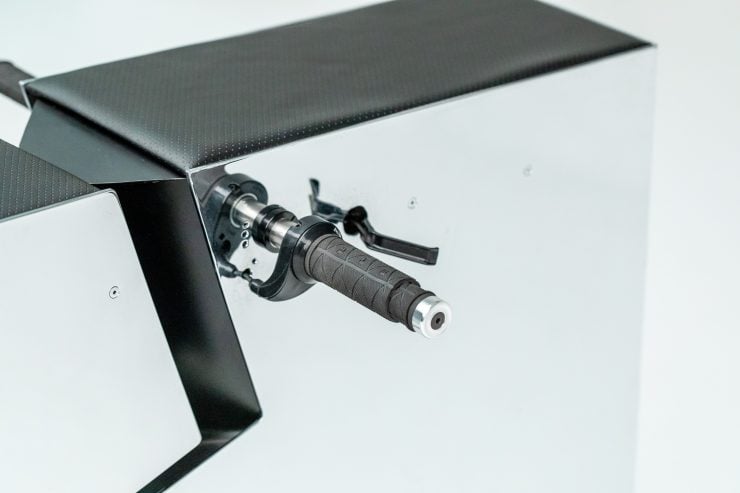 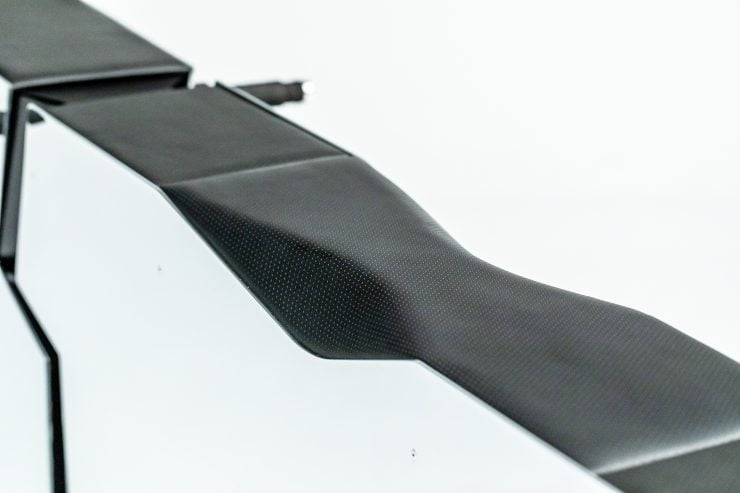 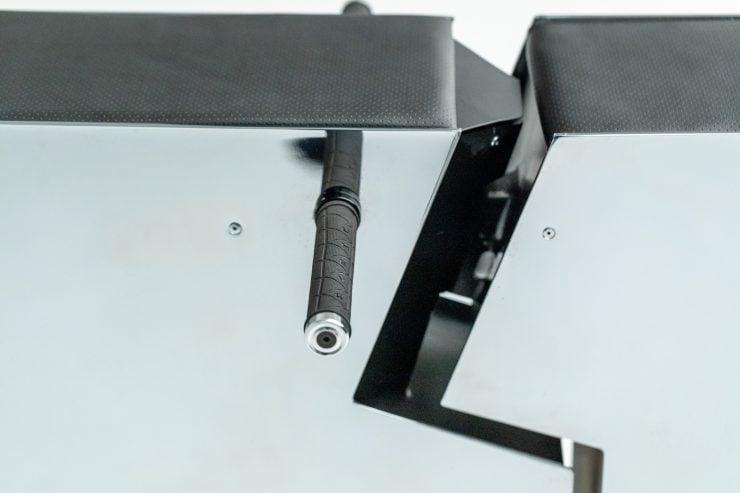 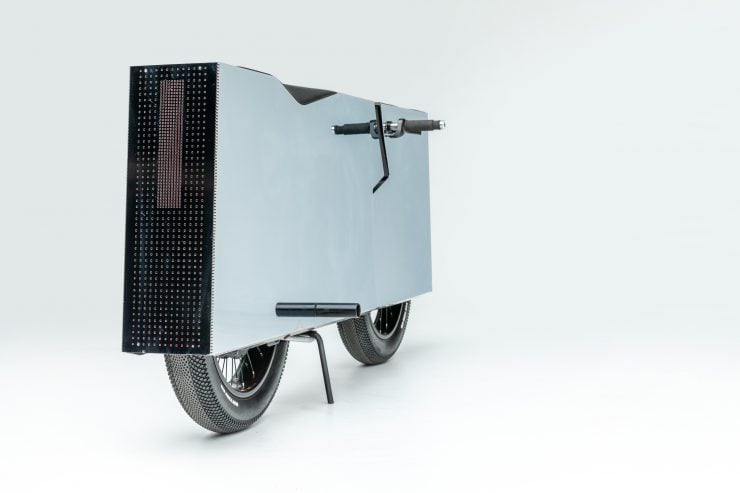 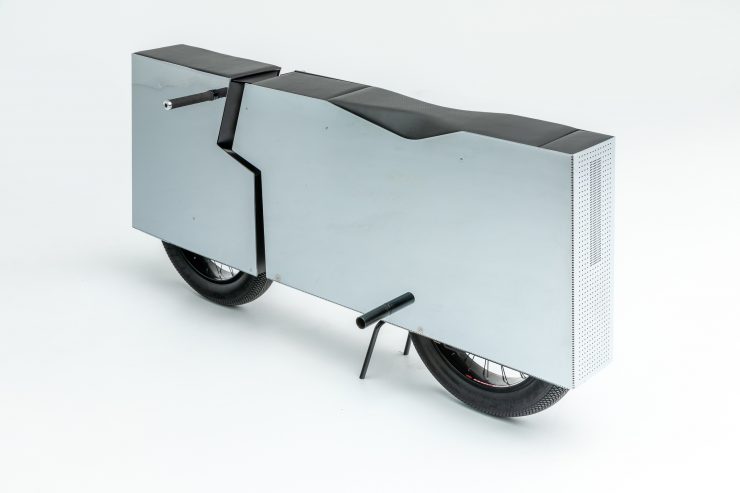 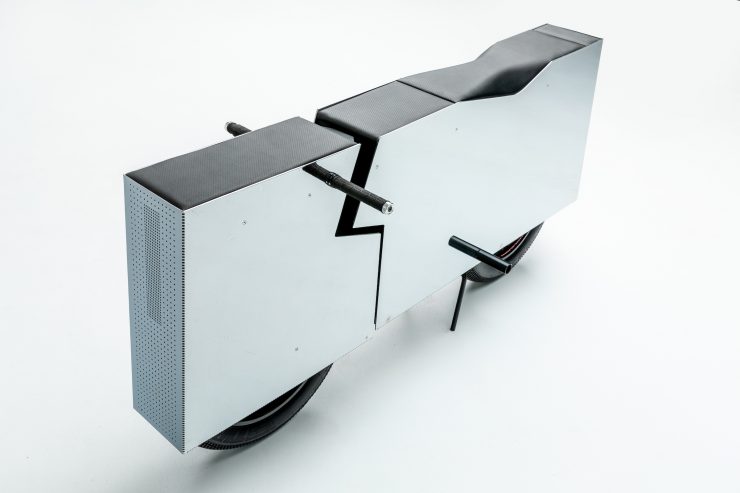 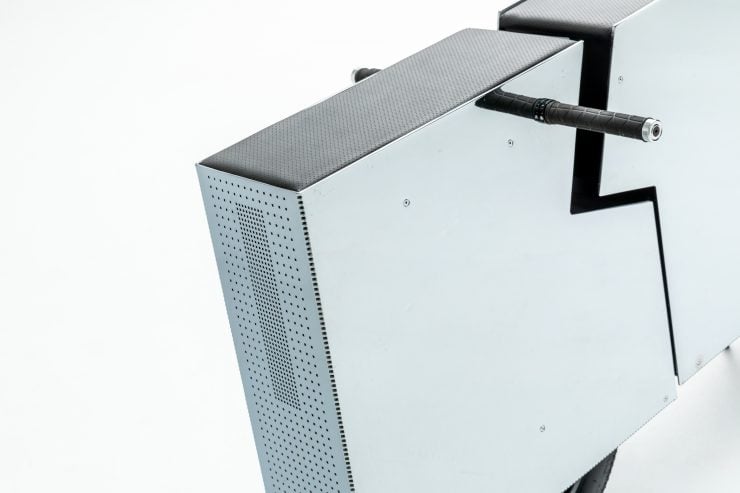 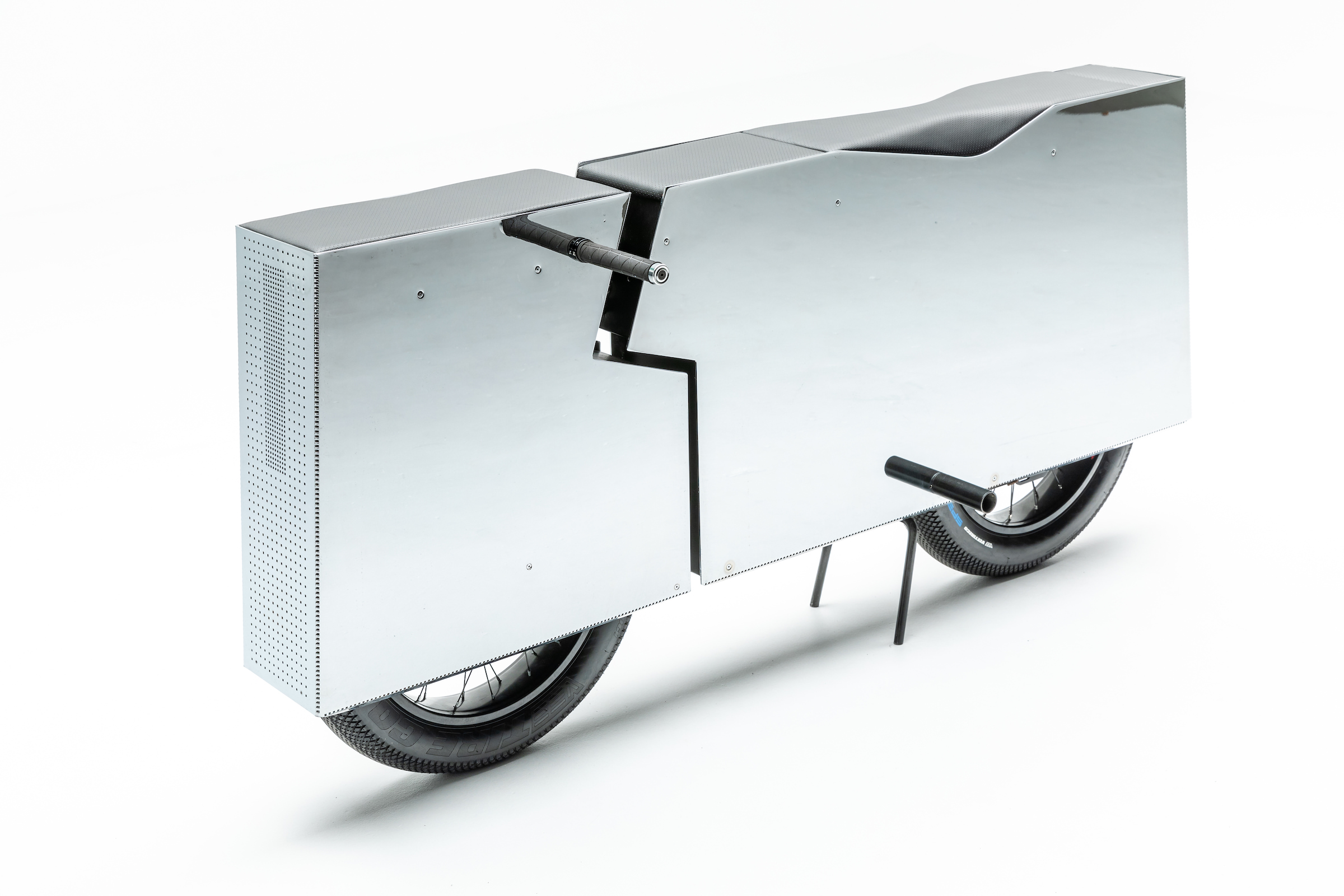