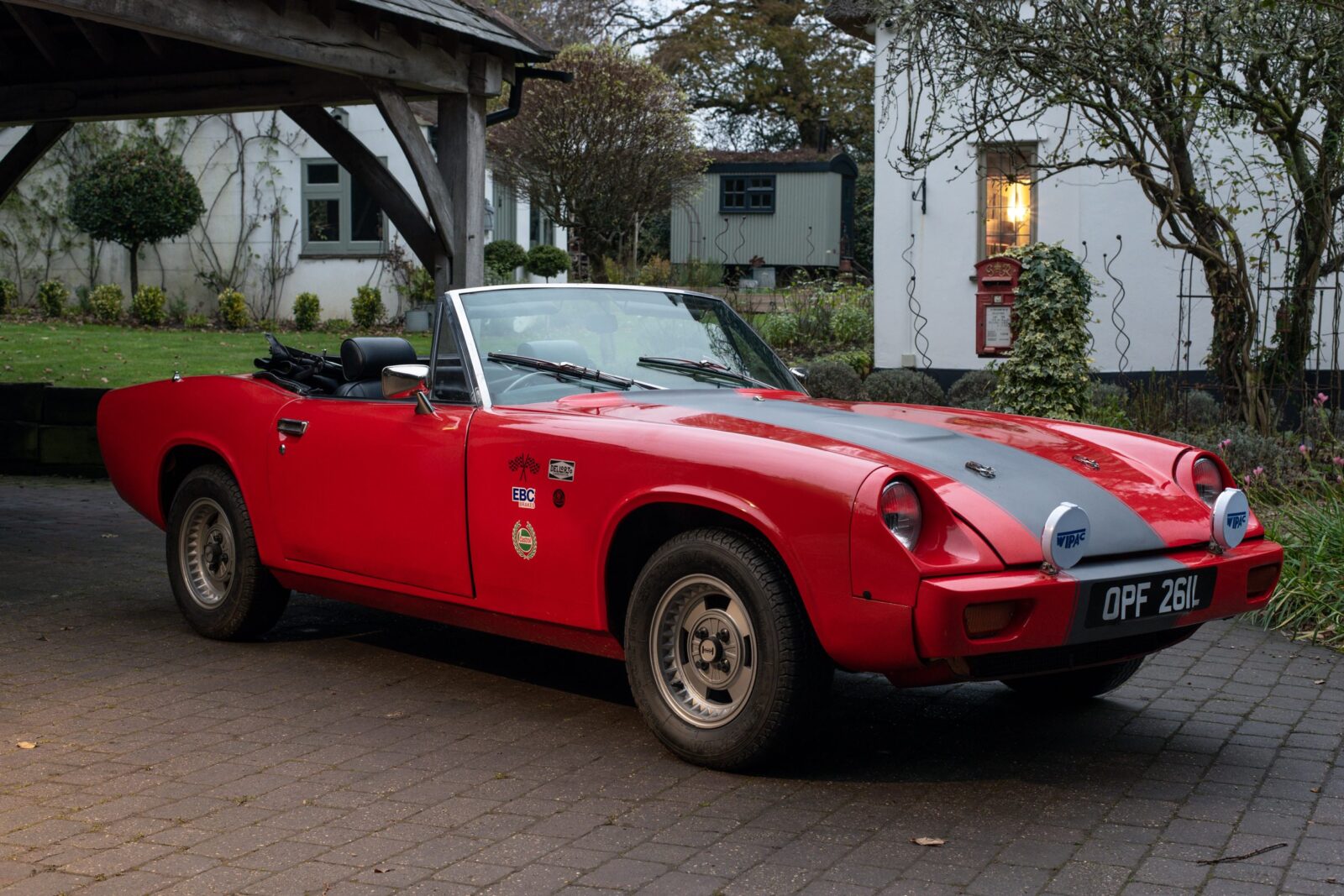 The Jensen-Healey is a classic car with dueling reputations, on the one hand it proved highly successful in motorsport as one of very few cars in history to win the Sports Car Club of America (SCCA) D Production Championship in its first year of racing. It would capture five of these championships in total, proving its inaugural win was no fluke.

The other side of the Jensen-Healey’s reputation is considerably less glossy, when the model was first released in 1973 it suffered a series of problems with both its engine and body, resulting in a poor reputation that haunted the model long after these problems had been corrected.

The original plans for the Jensen-Healey date back to the late 1960s, Donald Healey and his team had plans to create a replacement for the Big Healeys that was a slightly smaller car with a four-cylinder engine, good balance, and precise handling.

This was the original design for the Jensen Healey by William Towns, it’s far more sleek and modern than the final production car, with pop-up headlights and a small air inlet on the hood. Image courtesy of the Jensen Museum.

Jensen Motors had supplied bodies for the Austin-Healey 3000 and so Donald Healey already had a good working relationship with them. Kjell Qvale was the largest Austin-Healey dealer in the United States, and so it was that Jensen, Qvale, and Healey got together to create the new sports car.

The development process of this new car was fraught with challenges, sourcing a suitable engine was perhaps the largest dilemma. Engines from Ford including the Pinto and Essex V6 were considered, a Vauxhall engine was in the running, and the final car was very nearly powered by the 2.0 liter M10 engine used in the BMW 2002.

Ultimately the car would be powered by the then-new Lotus 907 engine. An all-alloy 45º four-cylinder engine with double overhead cams, four valves per cylinder, and 144 hp. This engine would prove to be both a blessing and a curse for the Jensen-Healey – it was lightweight and offered excellent performance, but it was also very new and it hadn’t been throughly tested yet.

The final design of the Jensen-Healey included a stamped steel convertible unibody structure riding on double wishbone and coil spring suspension at the front, with a live axle and trailing arms with coils at the rear. Power was provided by the Lotus 907 engine that would also be used in the Lotus Eclat, Lotus Elite, and Lotus Esprit. Power was sent back through a 4-speed transmission initially, with a 5-speed box being fitted in later models. 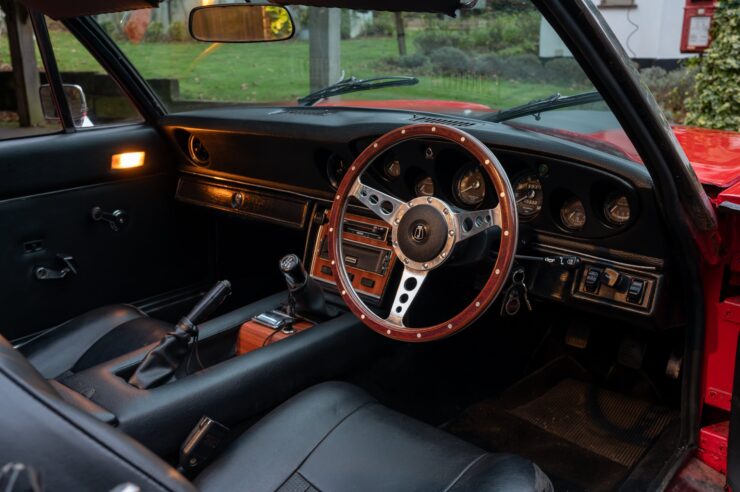 The interior of this car has a few upgrades including that wood-rimmed steering wheel and a new Alpine stereo.

The race track successes of the Jensen-Healey were significant, and would likely have led to the car being a best-seller if it hasn’t for the early teething problems suffered by the car.

The car has also proven highly competitive in vintage racing, a Jensen-Healey won at the Rolex Monterey Historics in 2013, and was awarded the Presidents Cup. 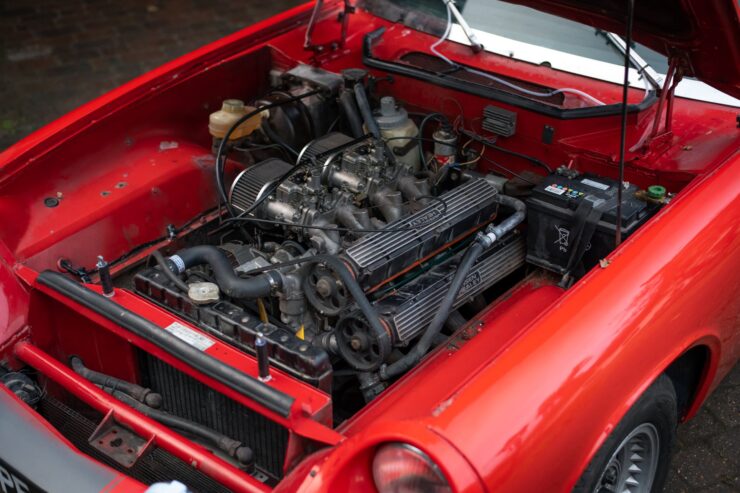 Sadly today the Jensen-Healey is best known for the problems suffered by the first generation Mark I cars. The largely untested Lotus 907 engine had a slew of problems including oil and water pump failures, timing belt slippage, oil leaks, and other issues. The bodies on these cars were also susceptible to rust (as were many other cars of the era of course), and the convertible tops were known to leak.

These problems were largely rectified in later versions of the Jensen-Healey, and many (if not most) examples of the Mark I cars for sale today have had them fixed. Despite the relatively low production volume the parts supply for the Jensen-Healey is excellent thanks to the fact that much of the suspension was sourced from Vauxhall, the engine and gearbox were sourced from outside manufacturers, and the body panels can all be ordered brand new from parts supplier Martin Robey.

The 1973 Oil Crisis and the teething troubles of the Jensen-Healey caused major financial problems for Jensen Motors, this combined with factory worker strikes brought the company to its knees in 1976 when it ceased trading with both the Jensen Interceptor and Jensen-Healey model lives finishing. 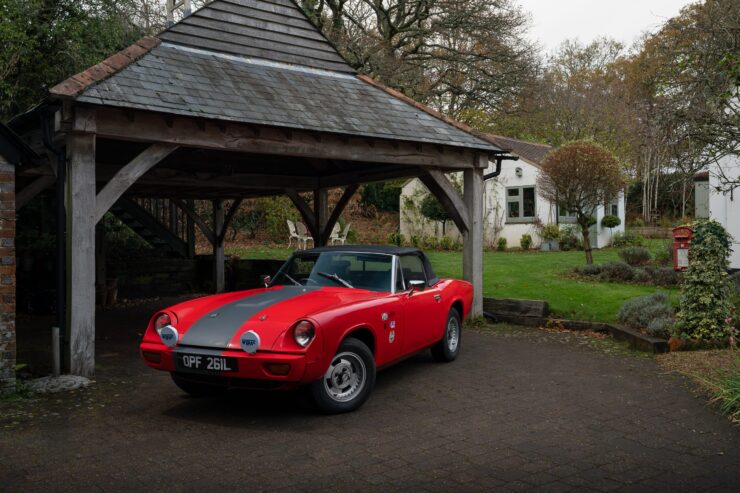 The front and rear bumpers on the Jensen-Healey were required to pass US safety laws, later cars had larger black bumpers.

The car you see here is a 1973 model from the first year of production, the VIN also indicates that it’s one of the Mark I cars. It has been painted in red, with a matte black racing stripe down the center, it has rally numbers and decals, and it has a color-coded front bumper.

A pair of WIPAC spotlights has been installed on top of the bumper, there are quick-release pin fastenings for the boot lid and hood, and it has had a recent service at TT Motors Racing.

Good examples of early Mark I Jensen-Healey’s don’t actually come up for sale all that often. Many haven’t survived and most of the cars you see for sale now tend to be the later Mark II and GT vehicles.

This Jensen-Healey is currently being auctioned live by Collecting Cars, if you’d like to read more about it or resister to bid you can click here to visit the listing. 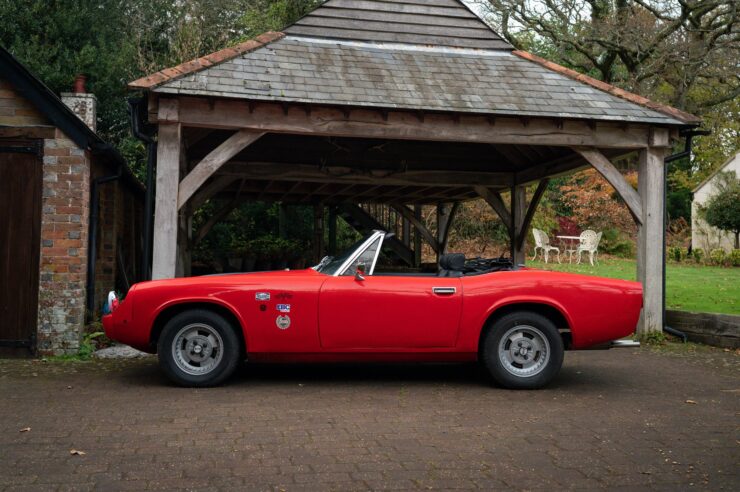 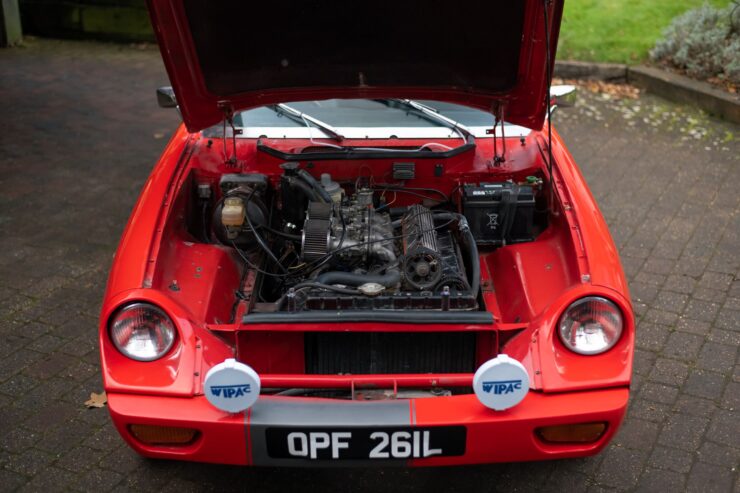 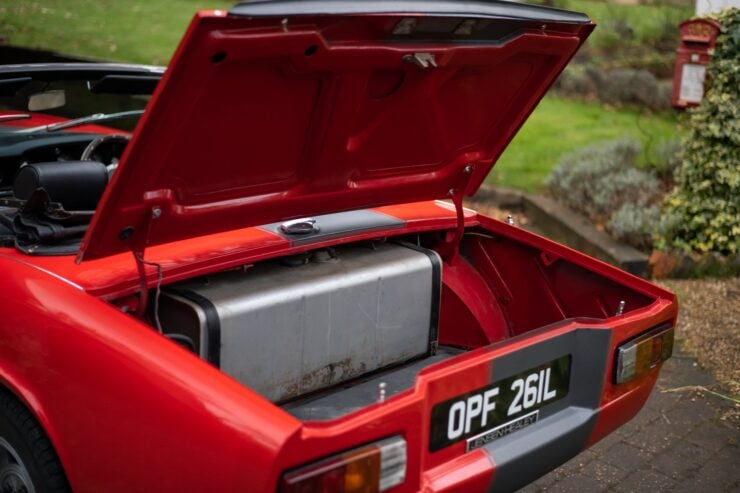 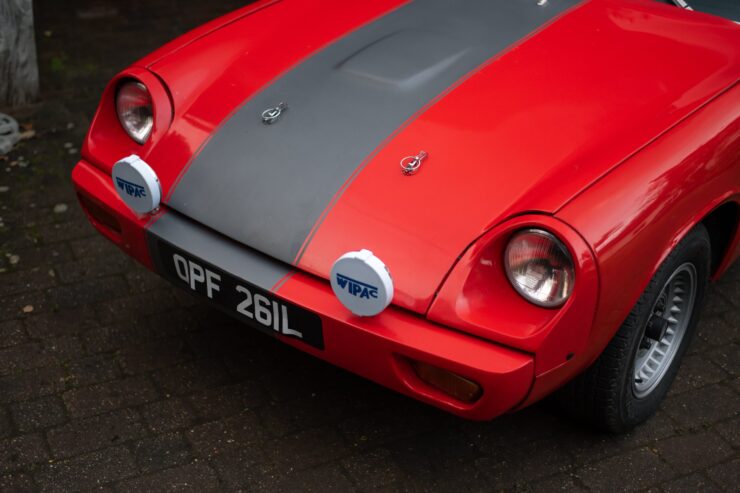 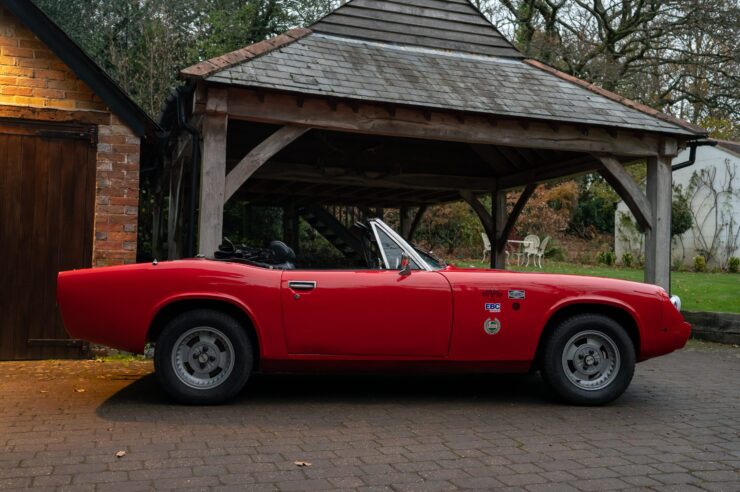 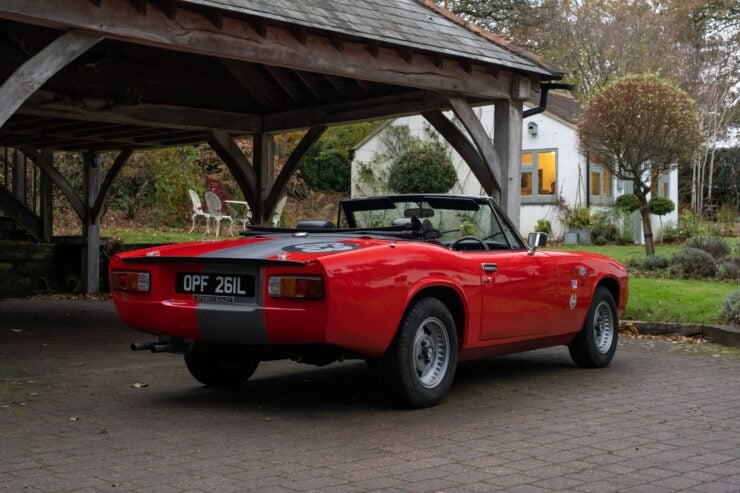 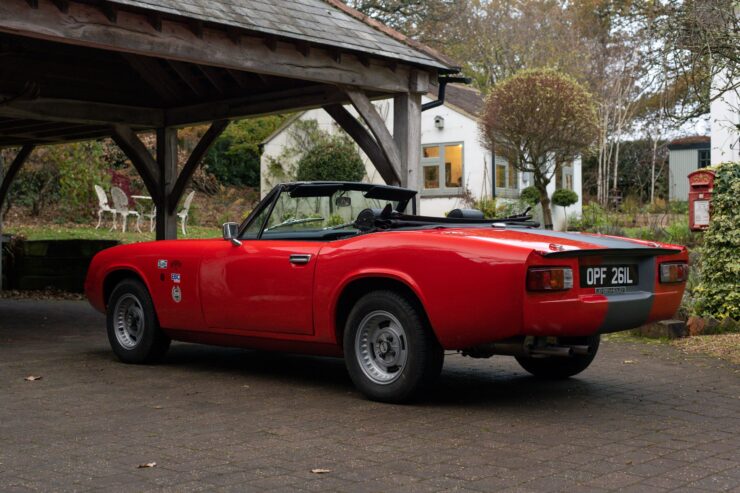 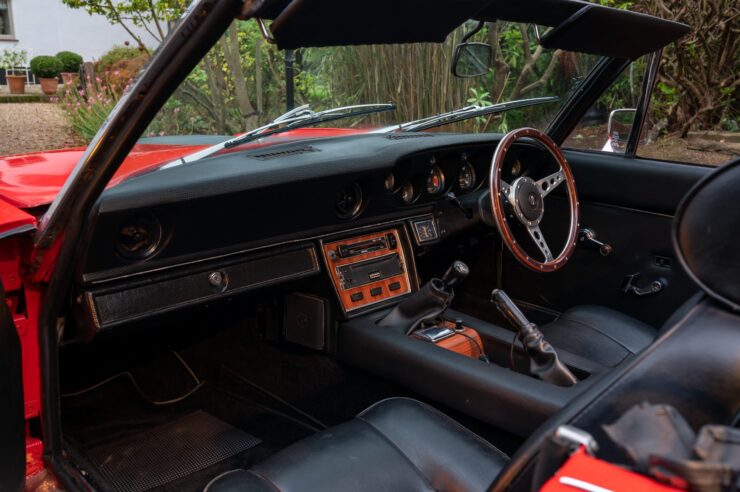 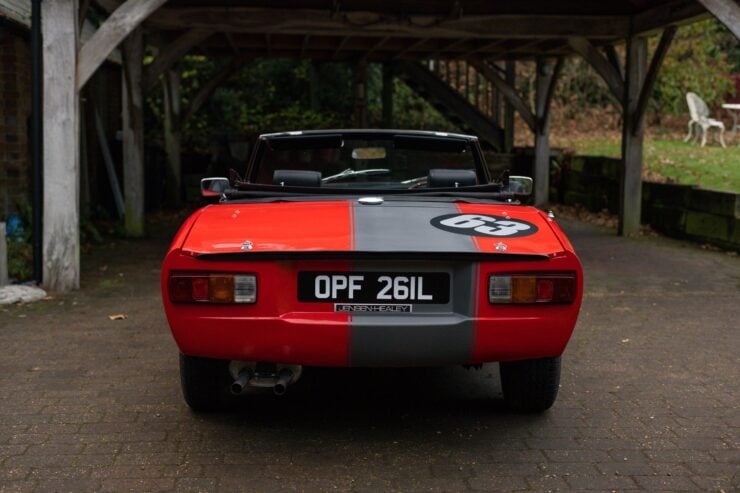