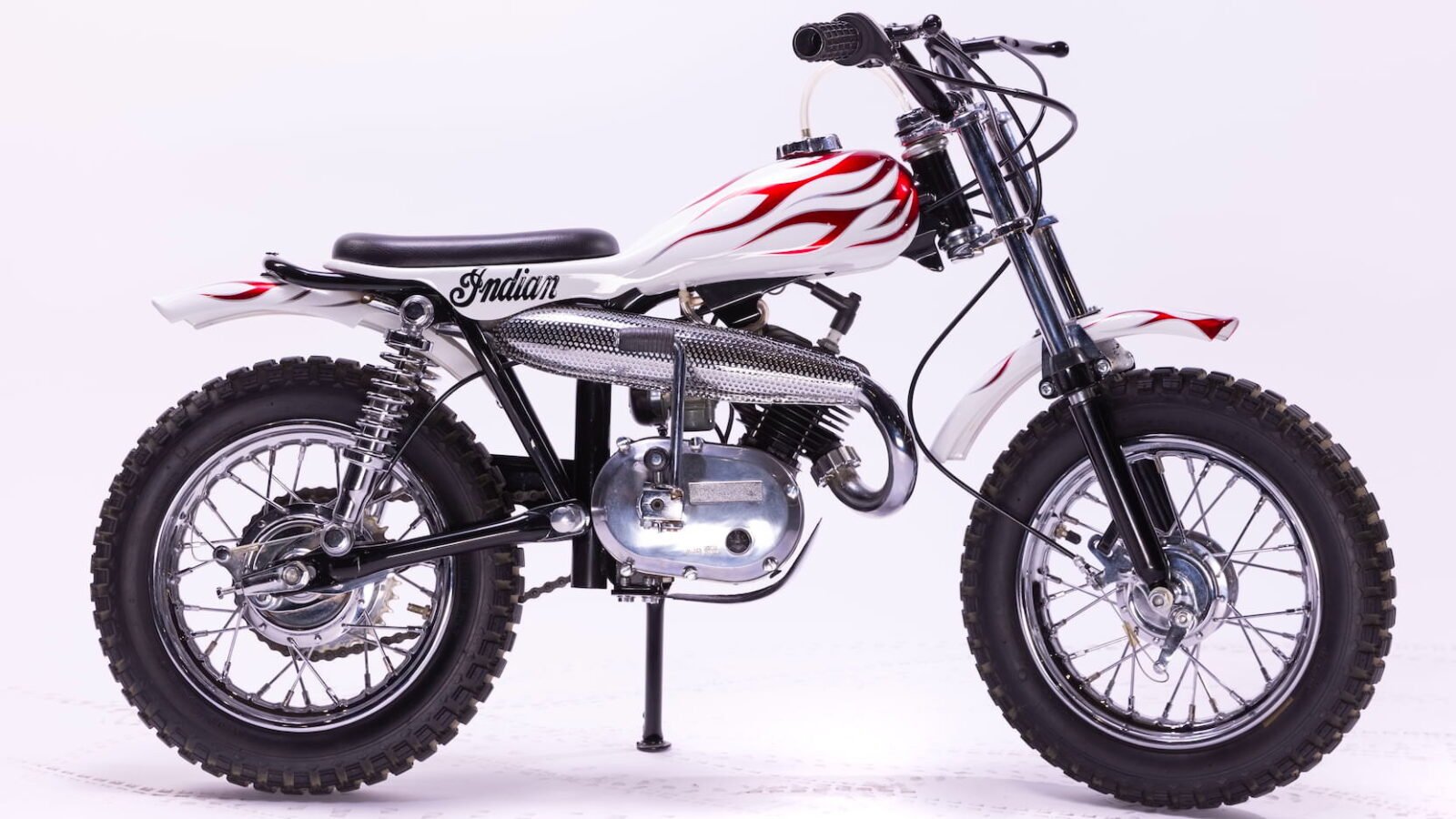 The Indian MM5A “Mini Mini” is one of the least well-known of the American motorcycle manufacturer’s previous models, which is a little surprising when you discover that this is the smallest motorcycle ever to wear an Indian badge.

In the 1960s the Indian Motorcycle Company was going through one of its many resurrections, though instead of designing and building their own motorcycles as in the days of yore, they were now just adding the Indian badge to imported bikes.

The smallest of these imported bikes was the Italjet Mini Mini Bambino. This was an Italian minibike that had been developed to take advantage of the surge in popularity surrounding minibikes in the 1960s, and with the Indian name and logo on the tank they were irresistible to many Americans. 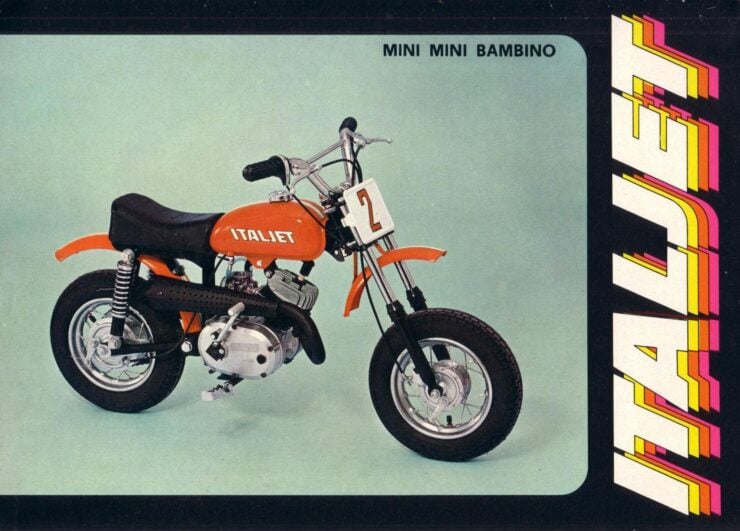 This is the Italjet Mini Mini Bambino, the Indian version is essentially the exact same motorcycle with minimal changes – including an Indian logo on the fuel tank.

When it was rebadged and sold in the USA the Italjet Mini Mini Bambino became the Indian MM5A Mini Mini, or more commonly, just the Indian Mini Mini.

The Mini Mini uses a simple tubular steel backbone frame, it has telescopic forks up front with hydraulic shock absorbers in the rear, drum brakes front and back, and an upright, enduro-like riding position.

Power is provided by the Italjet 50cc single-cylinder, air-cooled engine and the bike made do with no gearbox, power was sent directly to the rear wheel via a centrifugal clutch and a chain drive.

This lack of a traditional clutch or gears made riding the Indian Mini Mini exceptionally simple and easy for young children to master quickly – the bike was even offered with training wheels that would still allow riders up to 25º of lean angle. 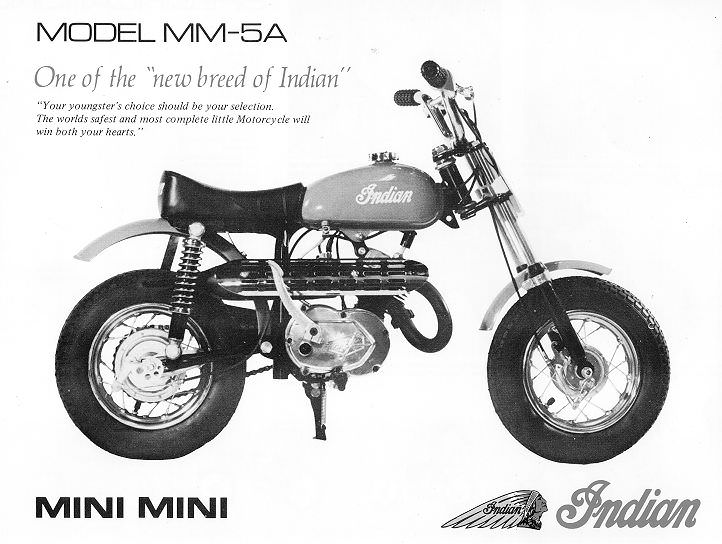 With simple construction, no gears to worry about, front and rear brakes as well as front and rear suspension, the Indian Mini Mini was an ideal first motorcycle.

The Indian Mini Mini cost $249 USD when new and the company sold many of them, though very few have survived to the modern day.

The example you see here has been given the custom treatment with a unique one-piece fuel tank and seat, and a red flame over white paint scheme on the tank and both fenders.

The bike was built by the Estenson Vintage Collection and it’s due to roll across the auction block with Mecum in January at their Las Vegas Auction with no reserve. 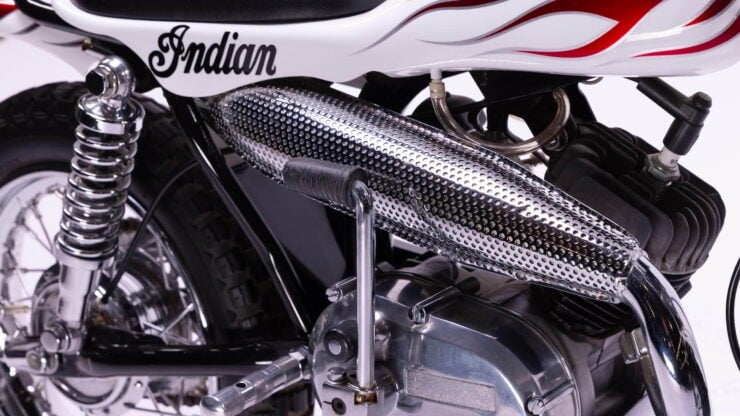 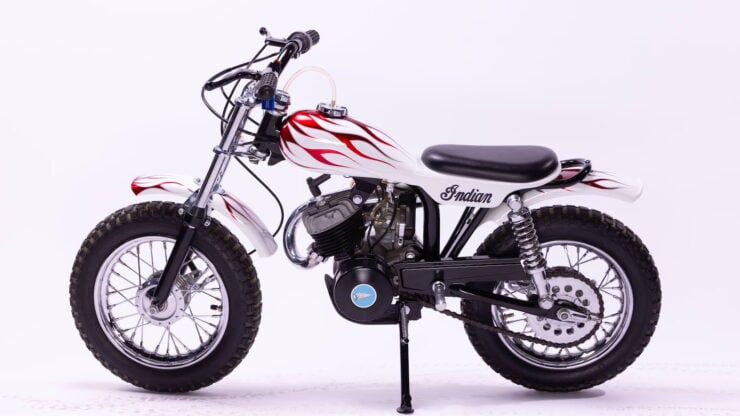