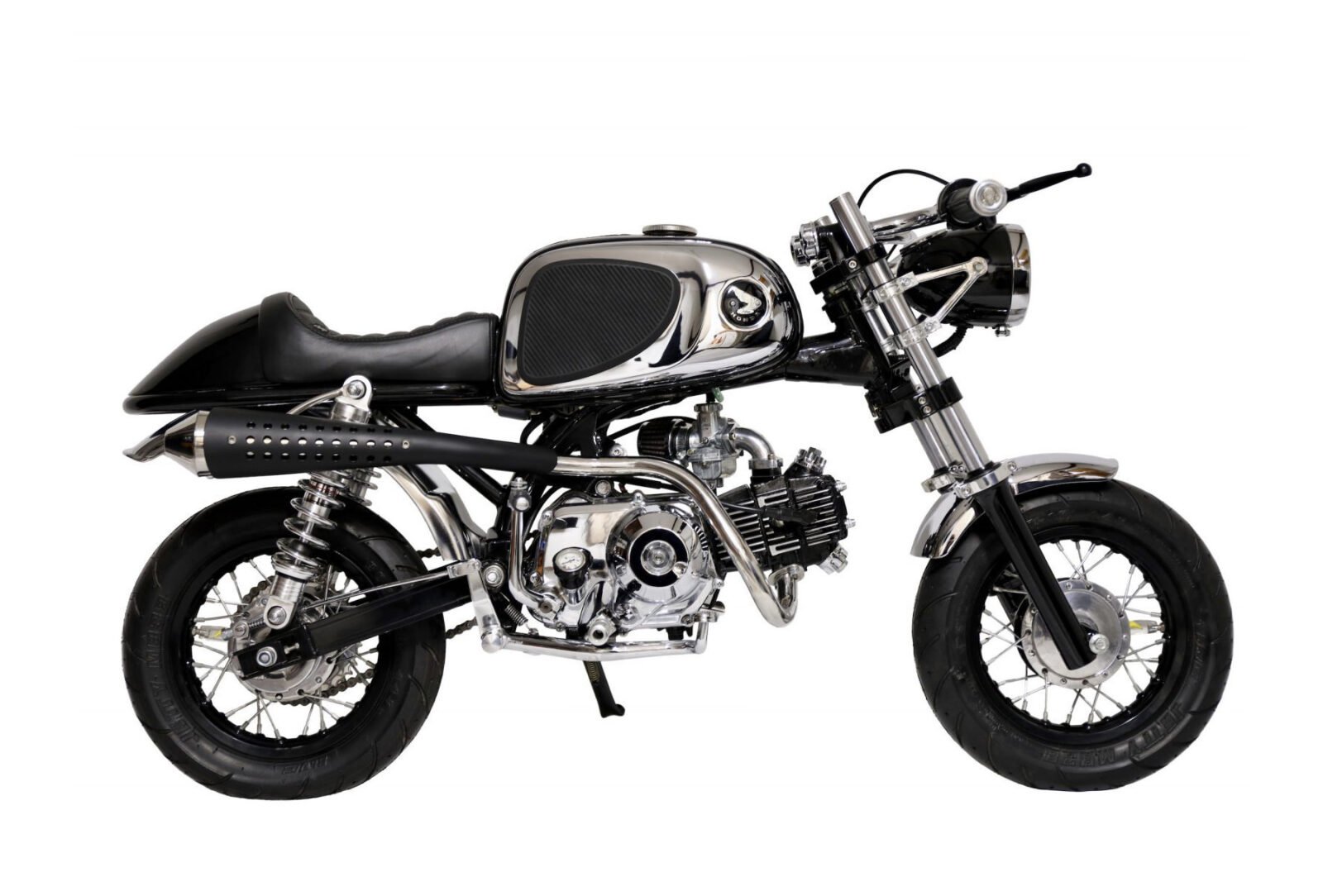 This fantastic Honda monkey bike cafe racer is the work of Chris Tope, the one-man-band behind the up and coming Utopeia Moto Company.

Amazingly, Chris does all of his bike building in a 10 foot by 12 foot workshop in his 44 foot travel trailer, this is doubtless one of the smallest custom motorcycle garage in the USA but despite its size his work has been published and admired around the world.

The reason Chris has a 44 foot travel trailer is because it’s his full-time residence. He works as a Biologist and Compliance Monitor for energy companies across the United States, he needs to be constantly moving for his work and as a result he’s lived in 9 states in the past 11 years.

Chris completed his first custom build while he was out working on a project in California, and he built the mini cafe racer you see here while on assignment in West Virginia. It started life as a 1977 Honda Z50, commonly referred to by its “Monkey Bike” nickname, and Chris bought it directly from the man who’d bought in new. 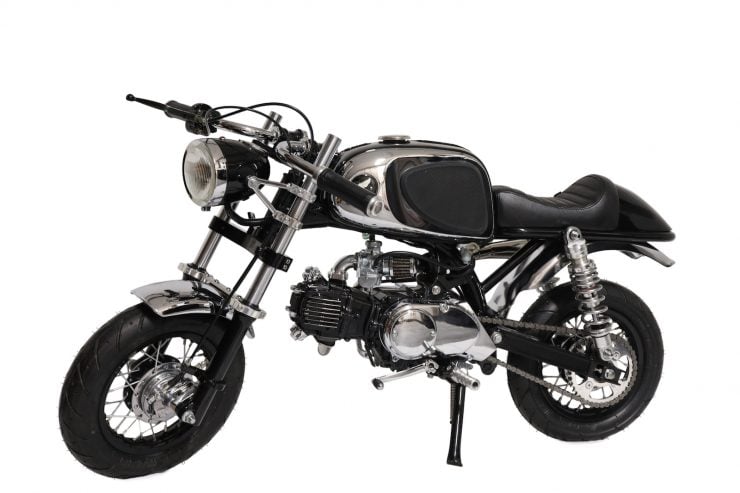 Once he’d bought the somewhat rough-around-the-edges Z50 Chris set about tearing it down and inspecting it. His goal with this build was the create a miniature version of his 1967 Honda CB450 Black Bomber Cafe Racer, Chris explains this below:

“I have always wanted to build a full-size café racer and a miniature café racer. I try to build bikes that are unique and differ from the rest. I built this Z50 after the Honda Black Bomber. Every nook and cranny has been either modified or fabricated. I have four custom hobo coins on the build. Two are 1937 Buffalo Nickels that have been hobo engraved as a monkey motorcycle rider with a vintage leather helmet smoking.”

“There are two 1937 buffalo nickels that have been hobo engraved as a zombie buffalo due to this build being built for the Buffalo Chips Show at Sturgis. I have also incorporated custom valve stems that have bananas. I added the bananas and the monkey hobo coins due to the Honda Z50 being known as a “Monkey Bike”. “ 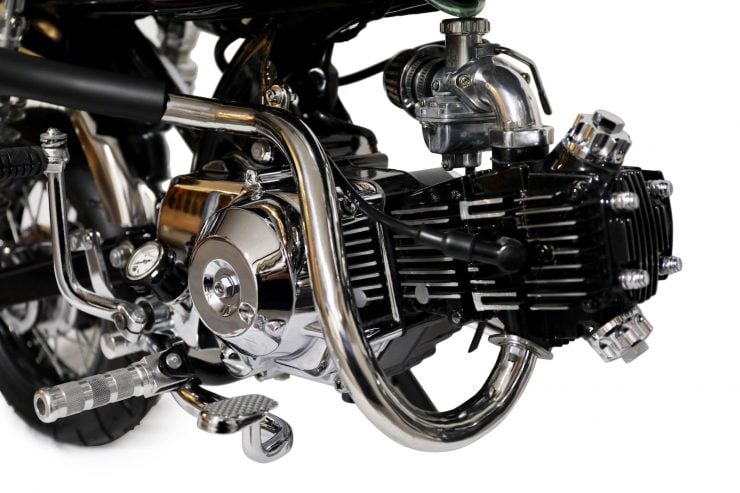 The immaculate presentation of the completed bike is a sight to behold, it undoubtably looks better now than it would have fresh from the factory, and it’ll be a hell of a lot faster too thanks to the Big Bore Kit that takes the swept capacity from 49cc to 88cc – it also now has a heavy duty clutch, and a larger carburetor.

The leather wrapped grips were completed by Bearscar, the throttle sleeves and bar ends were done by Mark Atkinson, and the custom monkey hobo coins in the handlebar ends were done by Narimantaspalsis. The swingarm was extended 1.5 inches and a pair of 280mm shocks were installed, the frame was powder coated by G & S Powdercoating and the chrome work was all done by Atlantic Coast Plating.

The original cast wheels were swapped out for more traditional spoked units and the original seat was replaced with a single seat and a padded rear cowl (built by Counterbalance Cycles) – meaning the bike now ticks many of the boxes we associate with cafe racers including low slung handlebars, knee indents in the tank, a single seat with a rear cowl, and a strict weight loss regimen to get ride of any superfluous parts.

The completed bike looks just just about the most fun pound-for-pound motorcycle we’ve featured in some time. If you’d like to see more of Chris’ work you can follow him here on Instagram. 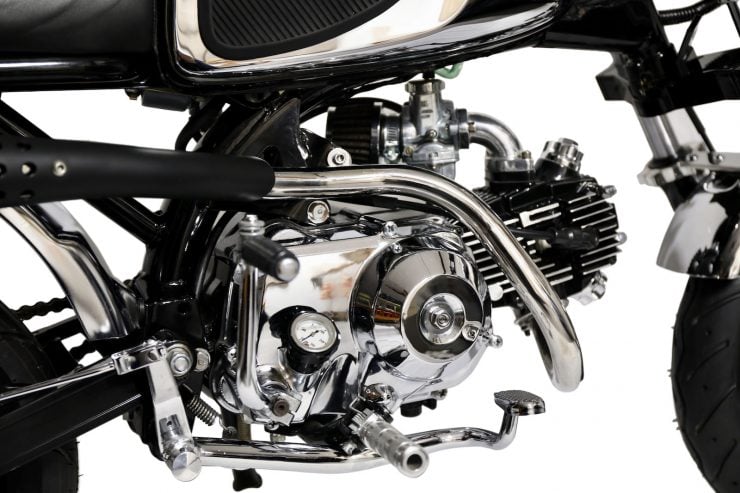 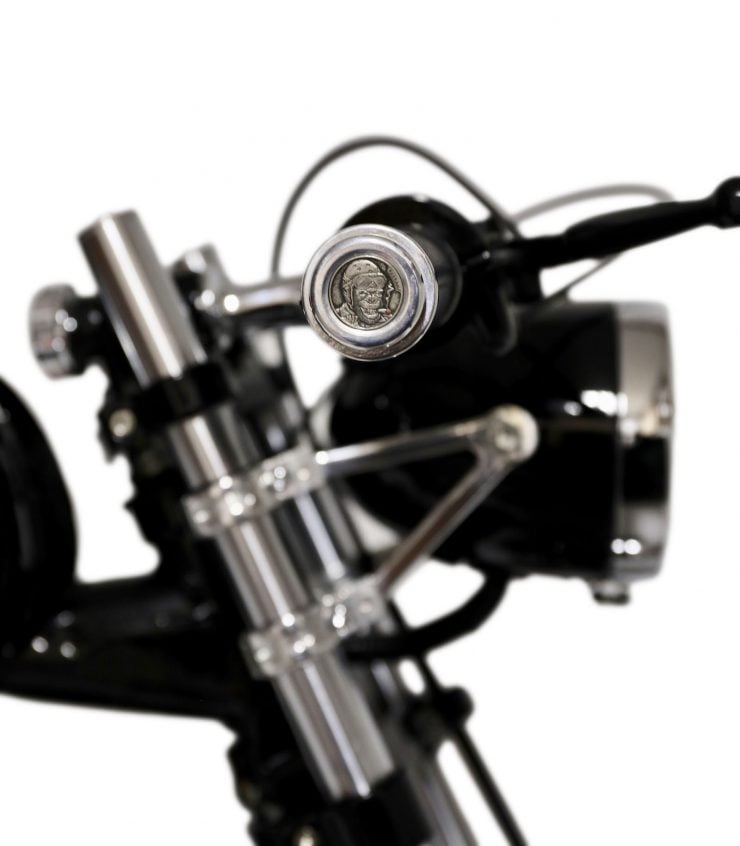 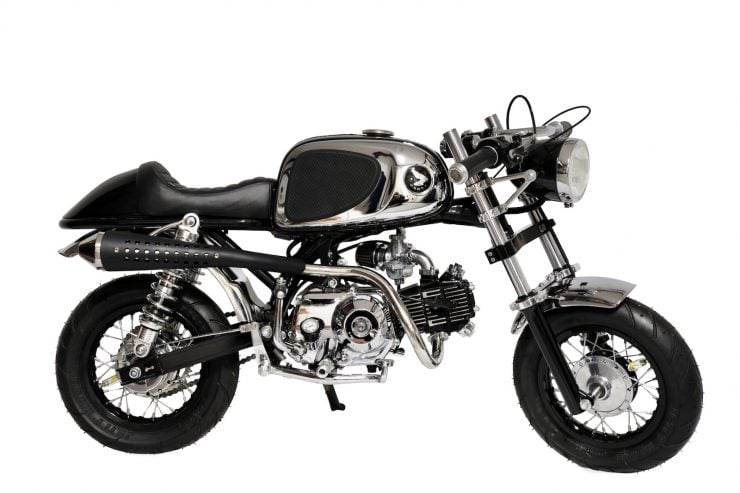 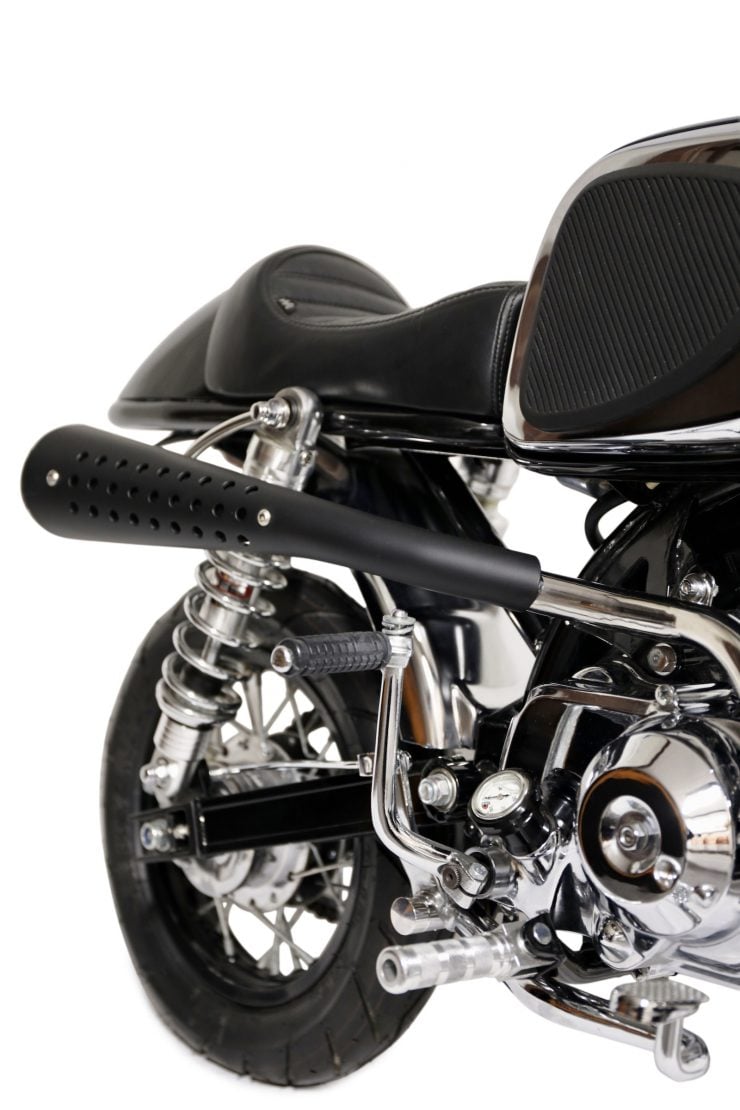 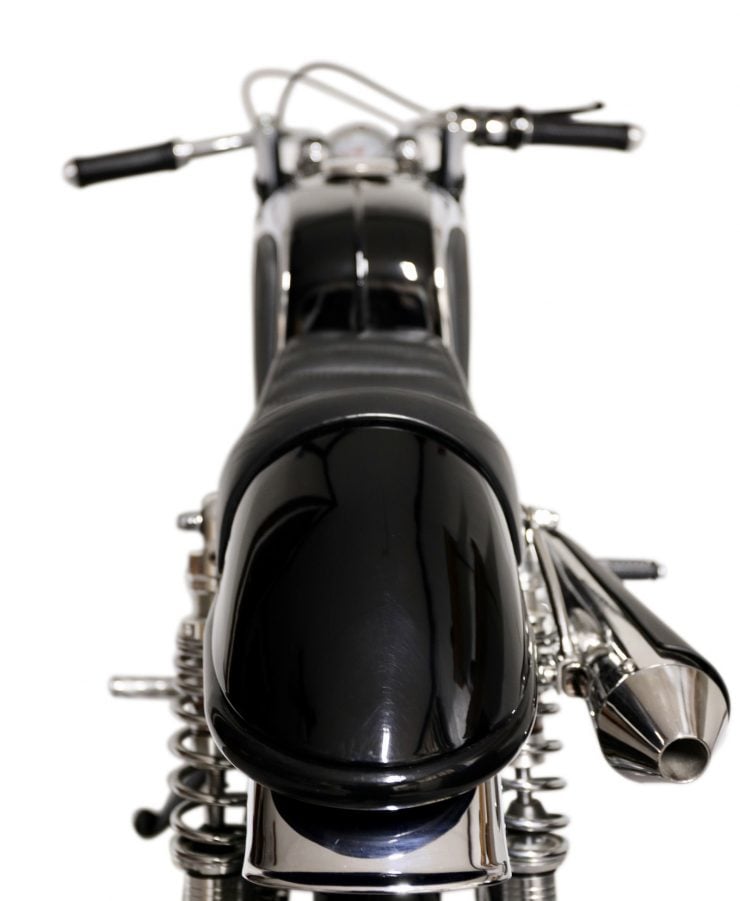 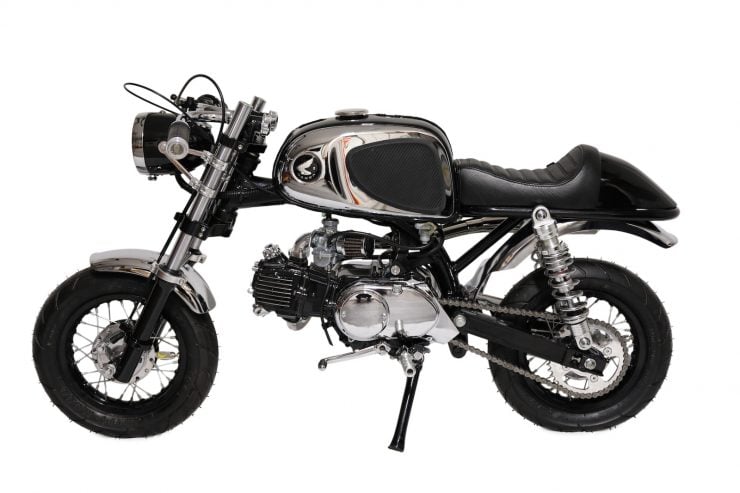 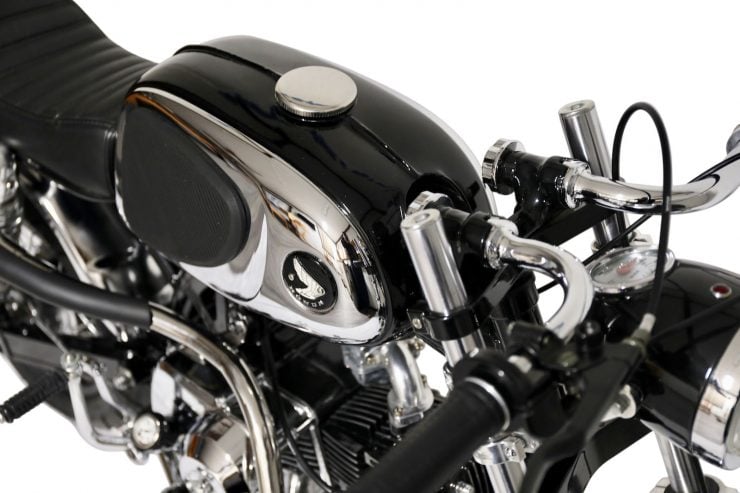 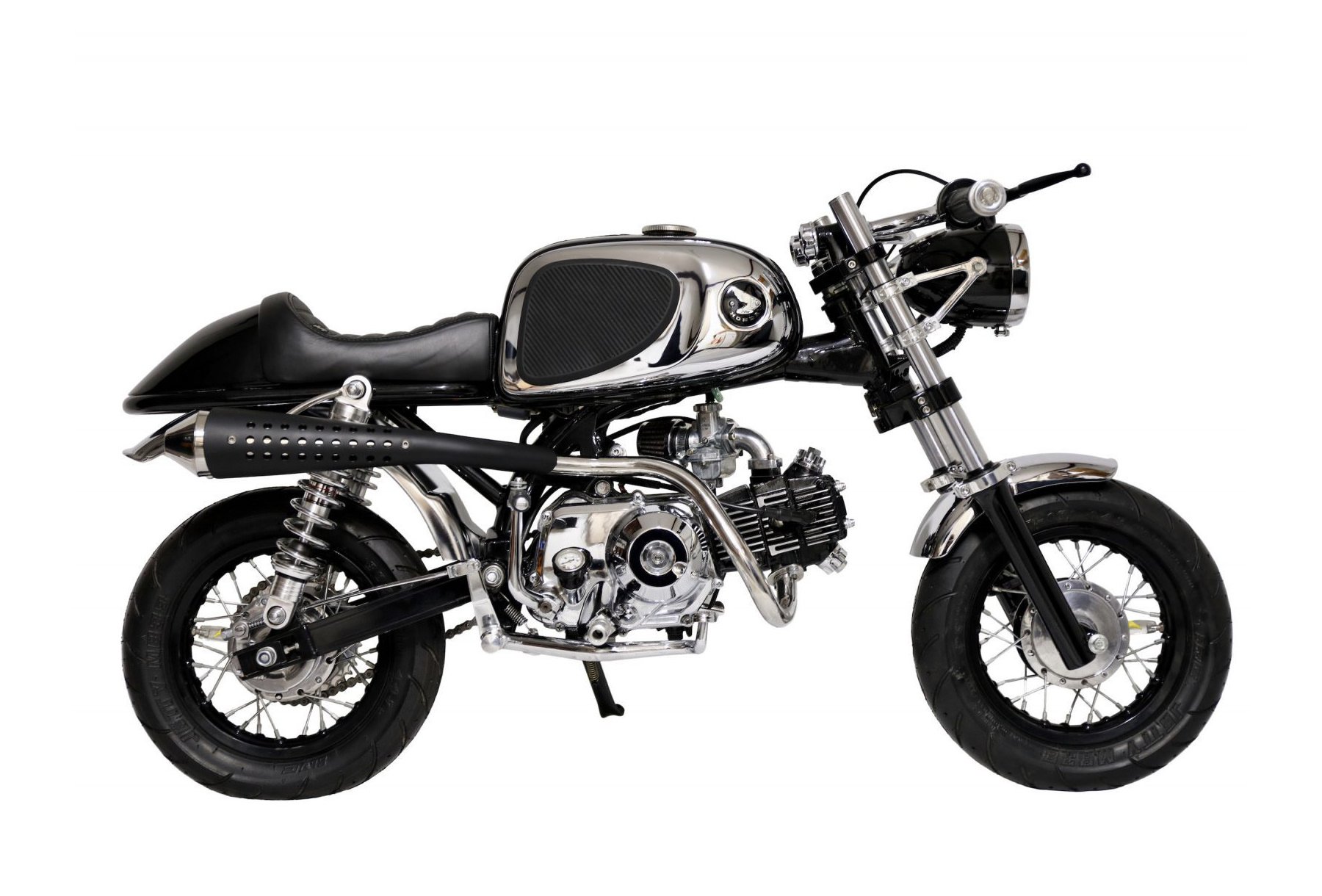