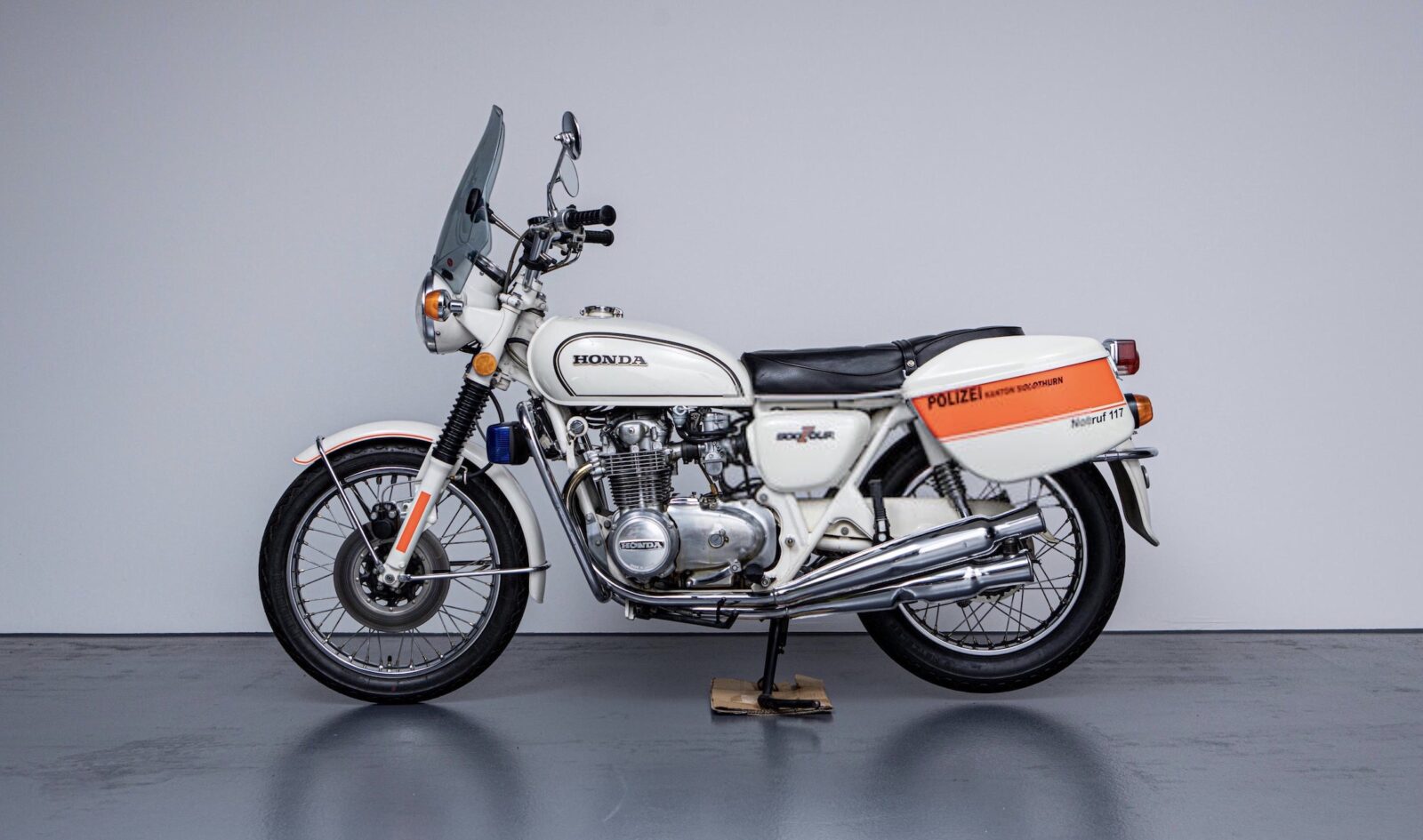 This is an original police motorcycle from Switzerland, it was first deployed in Canton de Fribourg before being transferred to Canton de Solothurn to complete its service life.

It may seem odd that the Swiss Police would choose the Honda CB500 instead of the larger and more famous Honda CB750 however when you look at the specification and performance figures for each of the two motorcycle it starts to make a little more sense. The Honda CB500 has a lower curb weight, a shorter wheelbase, and slightly better handling that its larger sibling. Interestingly it also has a faster 0 to 60 mph time and a 0 to 80 mph time that’s almost identical.

These attributes made the CB500 an excellent motorcycle for use on Switzerland’s tight twisting roads, as was doubtless discovered by many a playboy in their Ferraris and Lamborghinis blasting their way through Swiss mountain roads.

Honda released the CB500 Four in 1971 to accompany the already popular CB750 that had been released in 1969. Although fitted with a smaller engine the CB500 was a showstopper at the London Racing and Sporting Motorcycle Show, the lower price point and excellent performance that was on par with a 650cc twin appealed to a significant number of European riders. 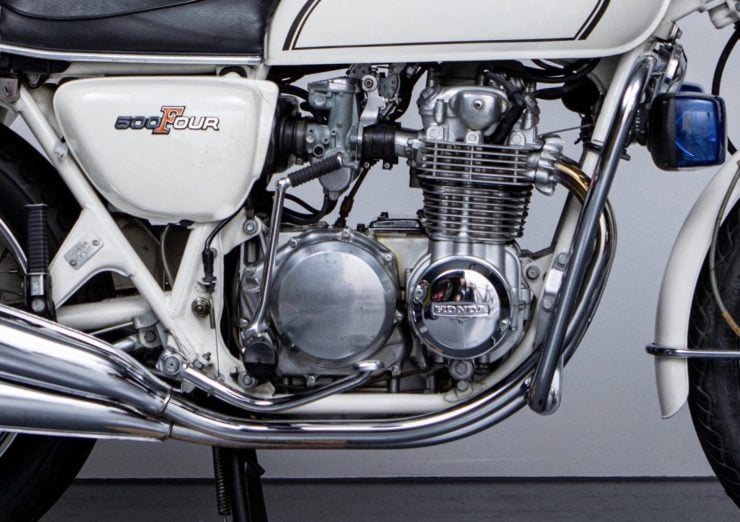 When developing the CB500, Honda essentially created an all-new engine that built on the successes of the larger CB750. Just like the larger engine the CB500 is an inline-4 cylinder with unit construction, a 5-speed gearbox, a front disc brake, four carburettors, a single overhead cam, two valves per cylinder, an electric starter and a horizontally split crankcase to keep leaks at bay.

This new inline-4 produced 50 bhp and could push the CB500 Four to 110 mph (177 km/h), performance that was enough for Bill Smith to win the 1973 500cc TT Production race riding one. The popularity of the model in Europe was such that Honda kept selling it from 1971 till 1978, many years after the 1974 CB550 had been introduced in the United States and some other world markets.

Bike magazine described the CB500 Four in the period: “For starters the 500 is a lighter machine with a shorter wheelbase. It therefore has a better power-to-weight ratio than its bigger brother and, significantly, it handles better through the curves. In fact, the 500 is faster up to 60mph in a straight line and its 80mph time is only a fraction of a second behind the 750.” 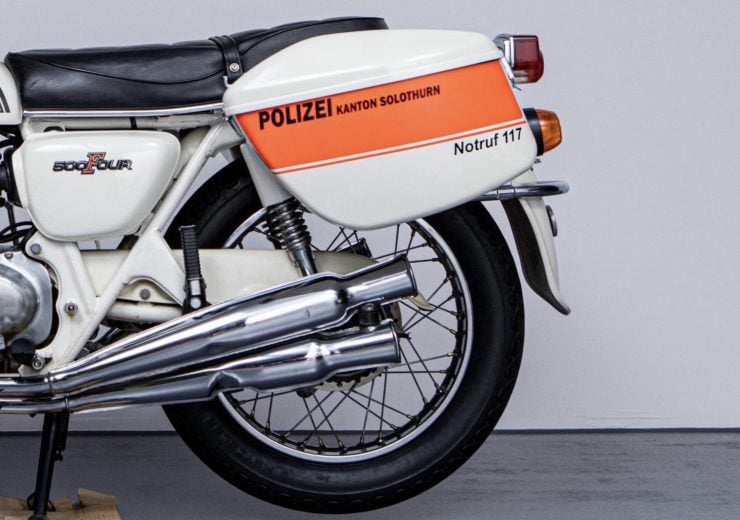 This police-specification CB500 was first registered on the 1st April 1977 and as mentioned above, it was deployed to the Canton de Fribourg followed by the Canton de Solothurn. It’s now on special Swiss Carte Grise (Veteran) registration and it’s presented in excellent original condition throughout wth working lights, its Canton de Solothurn police livery, it also has a large windshield and twin hard panniers, with a motorcycle engine guard mounted up front carrying two blue police lights.

If you’d like to read more about this unusual CB500 or register to bid you can click here to visit the listing on Bonhams. It’s due to roll across the auction block on the 20th of September at the Bonmont Sale in Switzerland, it has no reserve and the price guide is 10,000 to 15,000 CHF. 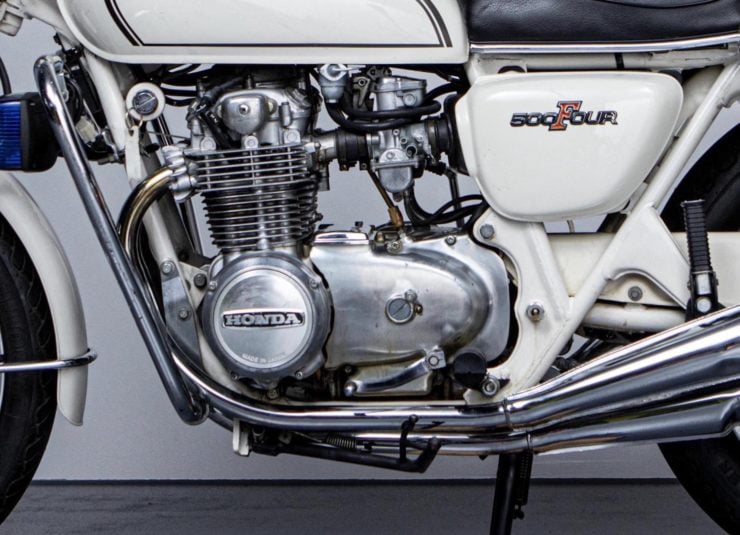 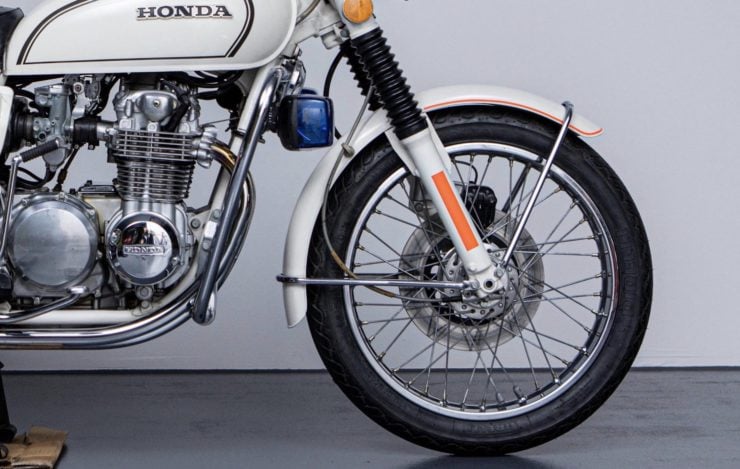 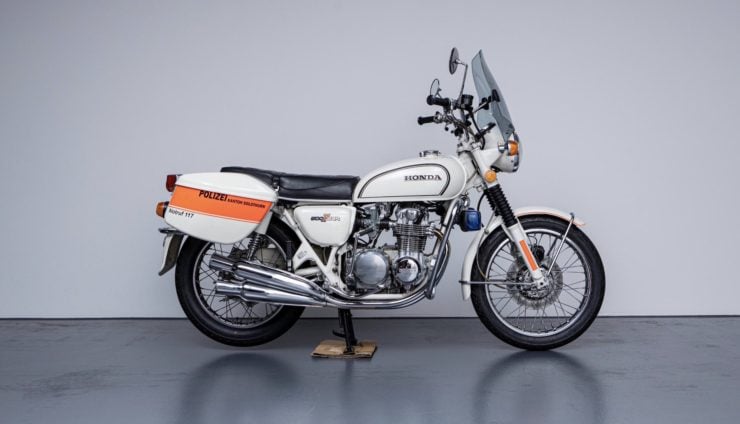 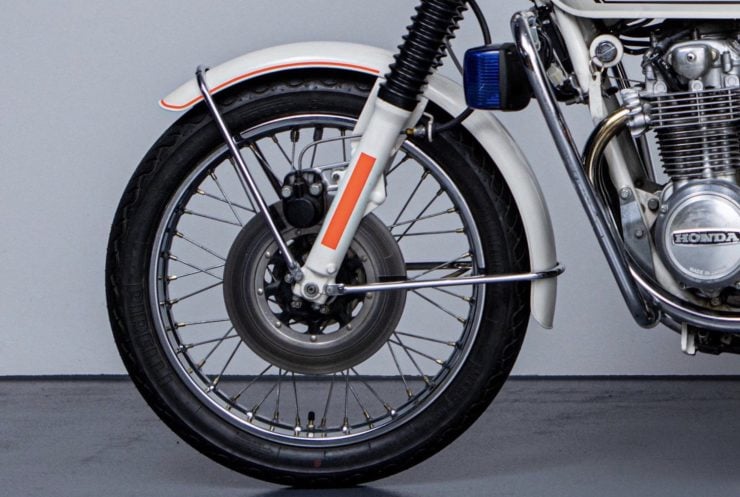 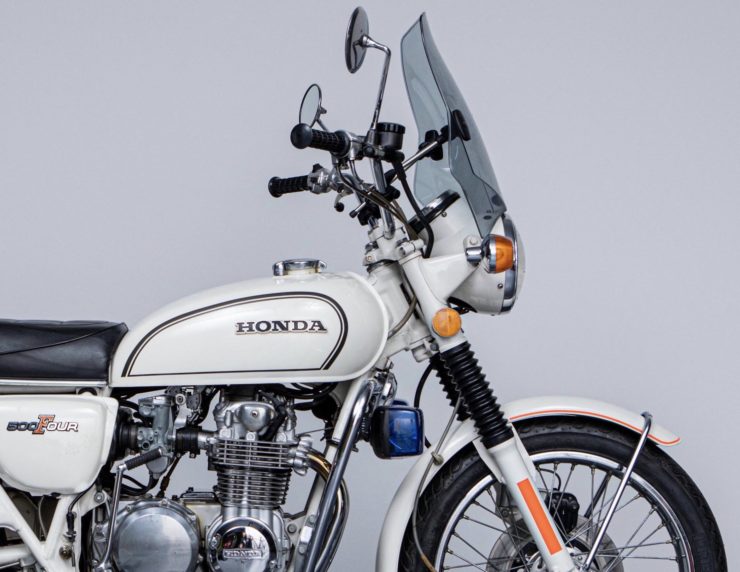 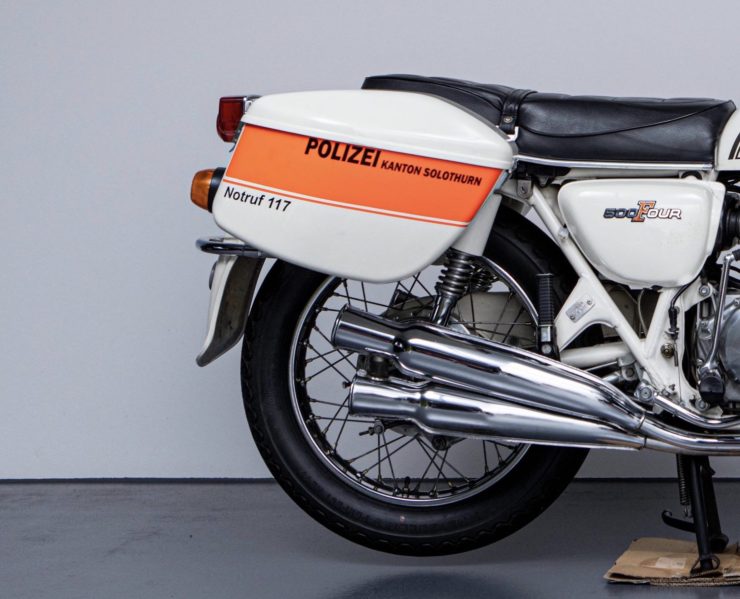 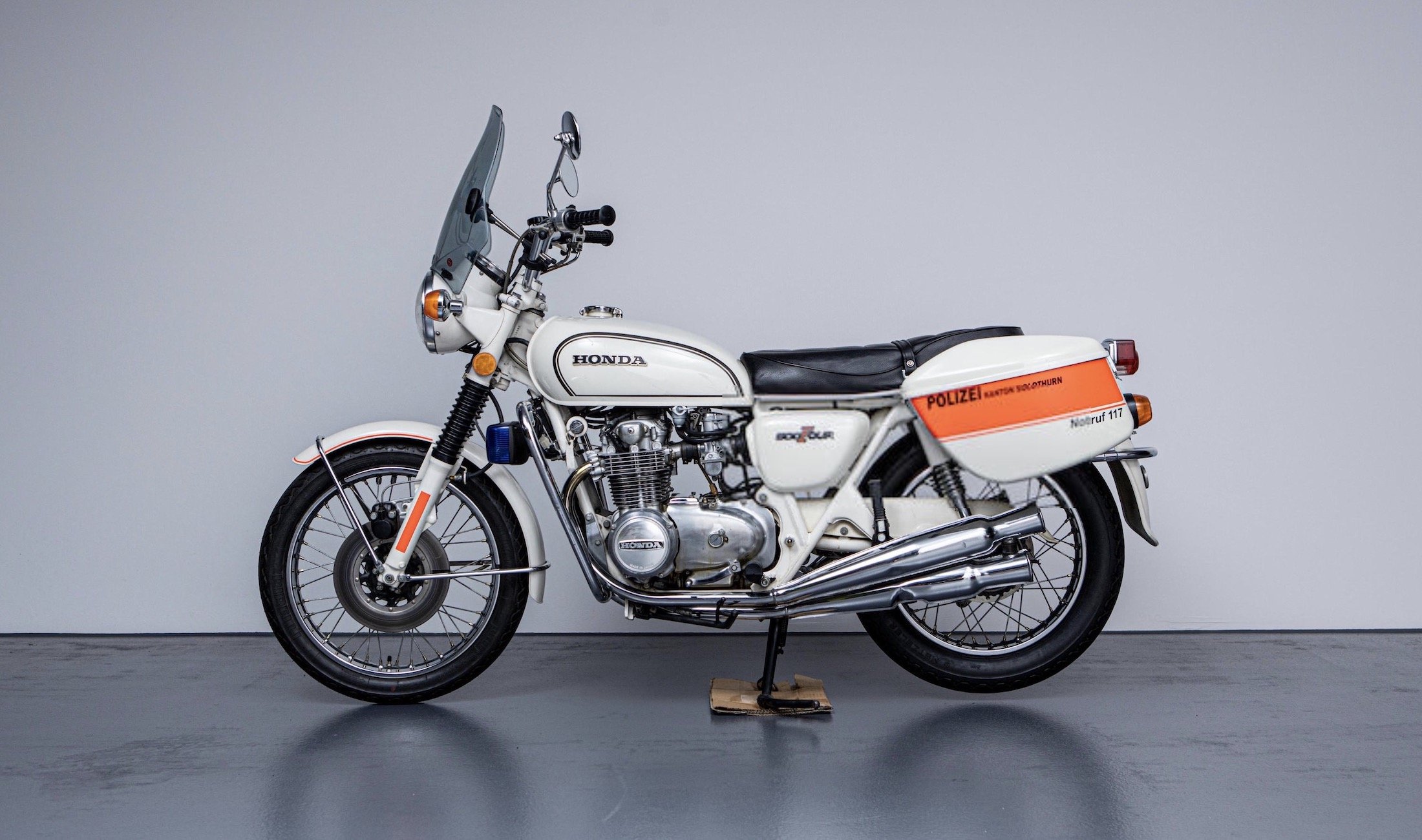