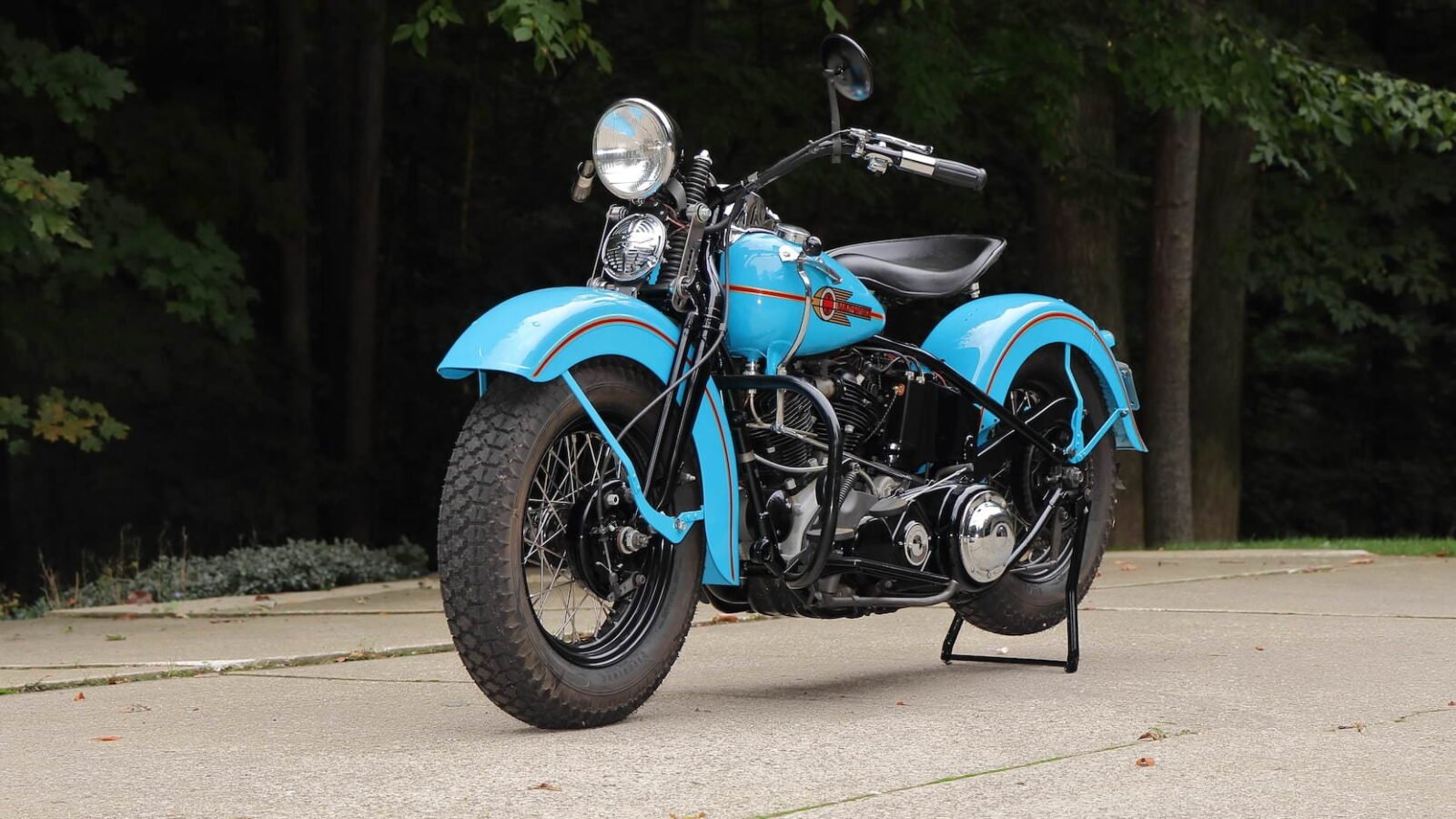 The Knucklehead V-twin fitted to the Harley-Davidson EL is doubtless one of the most famous motorcycle engines of all time, and it’s certainly one of the best-known American V-twins of the 20th century.

The name “Knucklehead” was coined by the EL model’s owners after the distinctive rocker boxes atop each cylinder – they have curved sections somewhat reminiscent of the knuckles on a human hand.

Later versions of this engine would have newly designed heads, the Panhead succeeded the Knucklehead, and this was then followed by the Shovelhead – all named for their resemblance to their namesake nicknames.

The American motorcycle market was dominated by simple single and V-twin motorcycles with either F-head or flathead (side valve) engines in the 1930s. Other more complex motorcycle engine designs existed of course, but the overwhelming majority of motorcycles on the road were these simpler, less complicated designs. 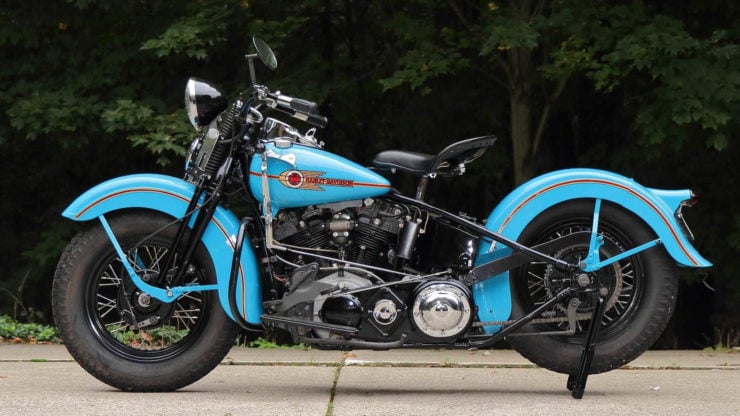 When the Harley-Davidson EL was introduced in 1936 with its all new overhead valve 61 cu. in. (1,000cc) engine and four-speed constant mesh gearbox it was lauded for its advanced engineering. All was not well under those distinctive rocker boxes though, and the rush to get the bike into production against the wishes of the engineers caused a series of problems – particularly with oil leaks and weak exhaust valve springs prone to breaking.

A series of updates were rolled out in 1937 to fix these issues, more updates would slowly roll out over the production run, and in 1941 a 74 cu. in, (1,210cc) version of the Knucklehead V-twin was introduced in the Harley-Davidson FL.

In order to prove to the general public that the teething issues of the new engine were a thing of the past Harley-Davidson engineer Joe Petrali built a modified and streamlined Model E Knucklehead land speed bike and set a new record of 136.183 mph in 1937.

It was around this time that Pasadena Motorcycle Police officer Fred Ham took his own Harley-Davidson Model E to Muroc Dry Lake and marked out a circular five mile course with flags and fire-pots for an around the clock 24 hour high speed record run. He managed an average speed of 76.02 mph and covered 1,825 miles setting speed and distance records only stopping for fuel, oil, and fruit juice. 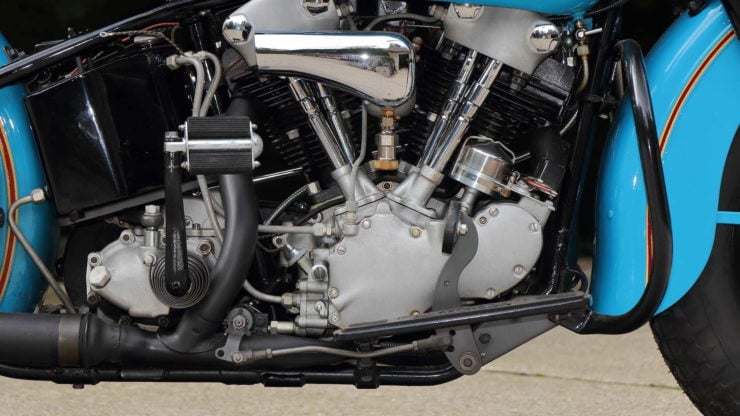 With the reputation of the Knucklehead now well and truly repaired the model proved to be a good seller for Harley-Davidson, helping to keep the company in business during the later days of the Great Depression. In 1948 the revised Panhead was introduced, it shared much of the same architecture and parts with its forebear.

Today the original Knucklehead-powered Harleys are highly sought after and entirely communities exist online to provide advice and parts to keep them on the road.

The pristine 1938 EL Knucklehead you see here has been comprehensively restored to as-new condition, it now has just 147 miles on the odometer. It was painted by hand including all of the original factory-spec pinstriping, and it’s finished in a beautiful bright shade of sky blue.

The bike is listed as being in good running and shifting order, making it ideal for use as a regular rider or as an addition a collection of classic American iron. If you’d like to read more about this motorcycle or register to bid you can click here to visit the listing on Mecum. 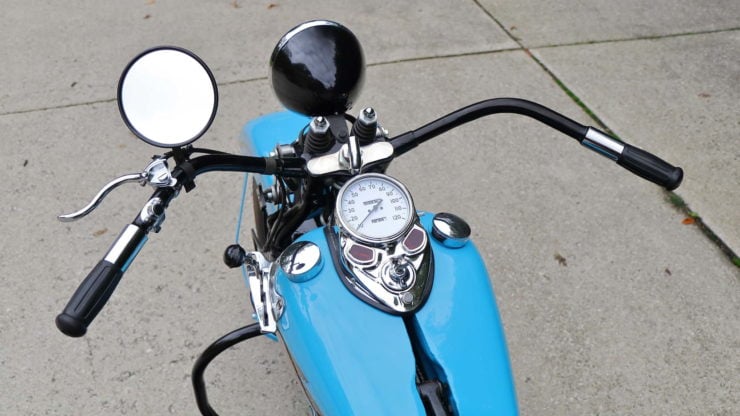 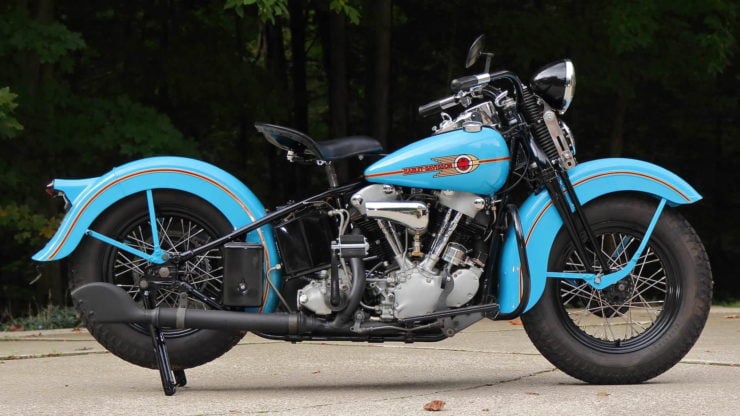 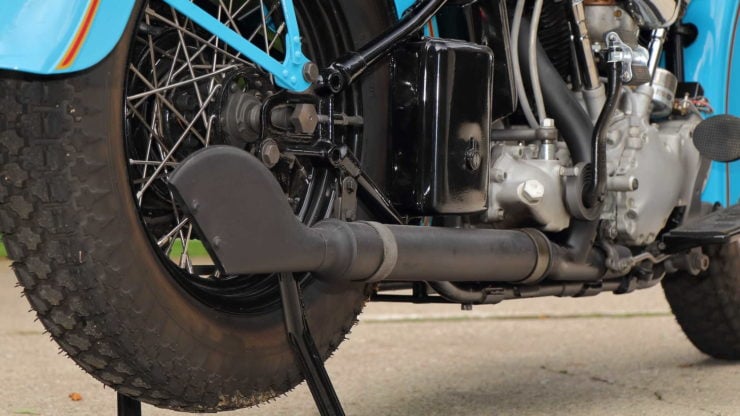 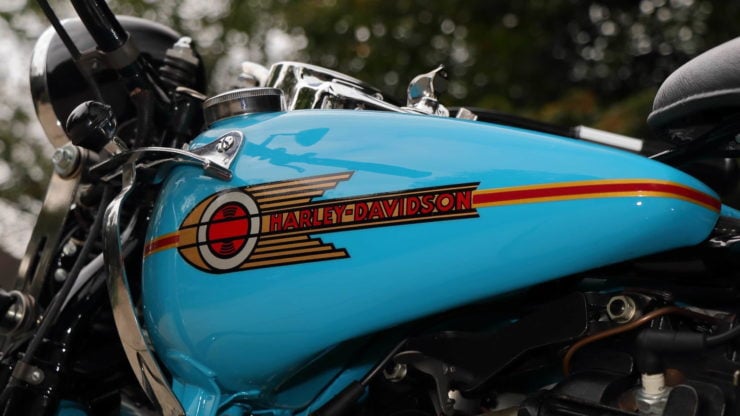 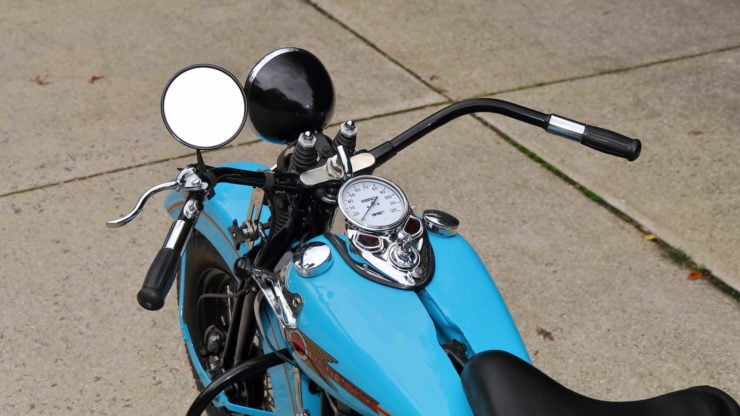 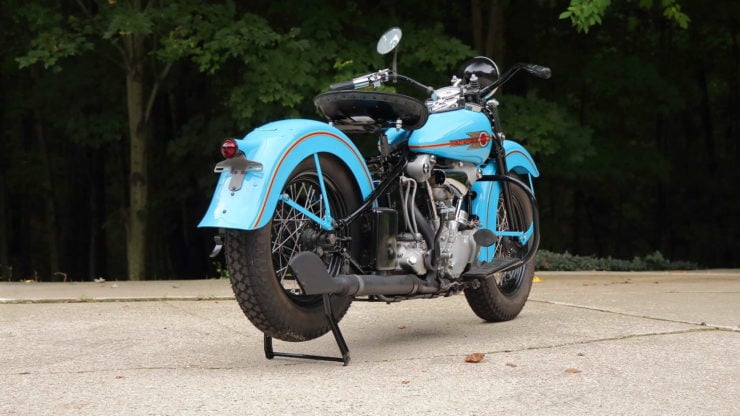 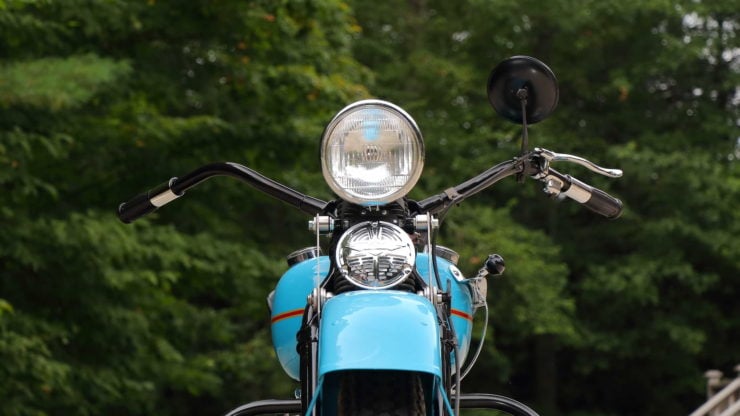 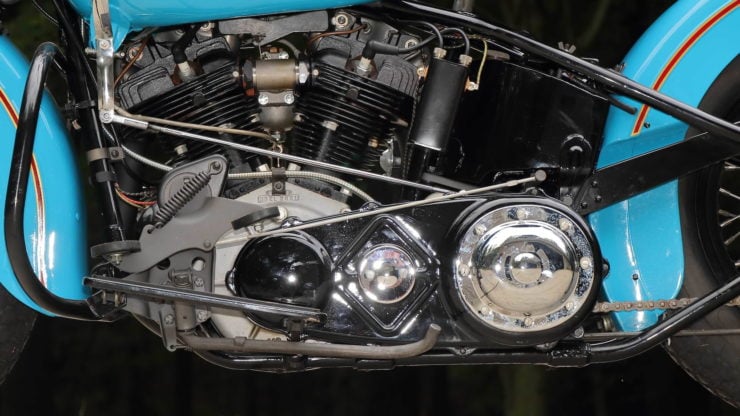 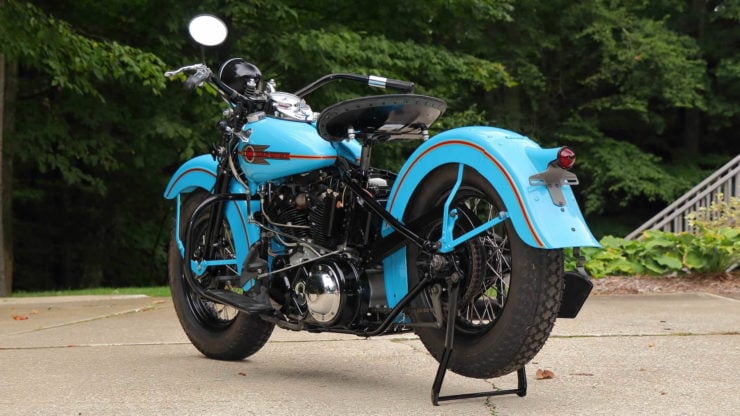 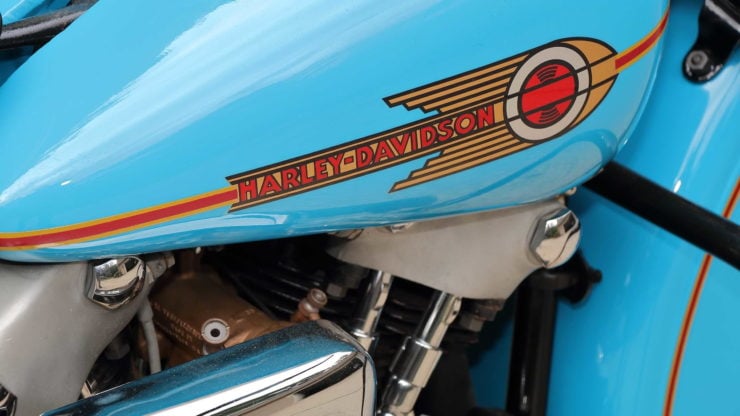 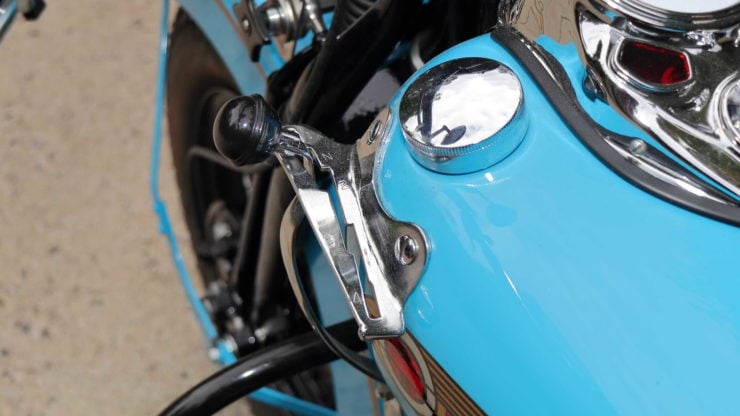 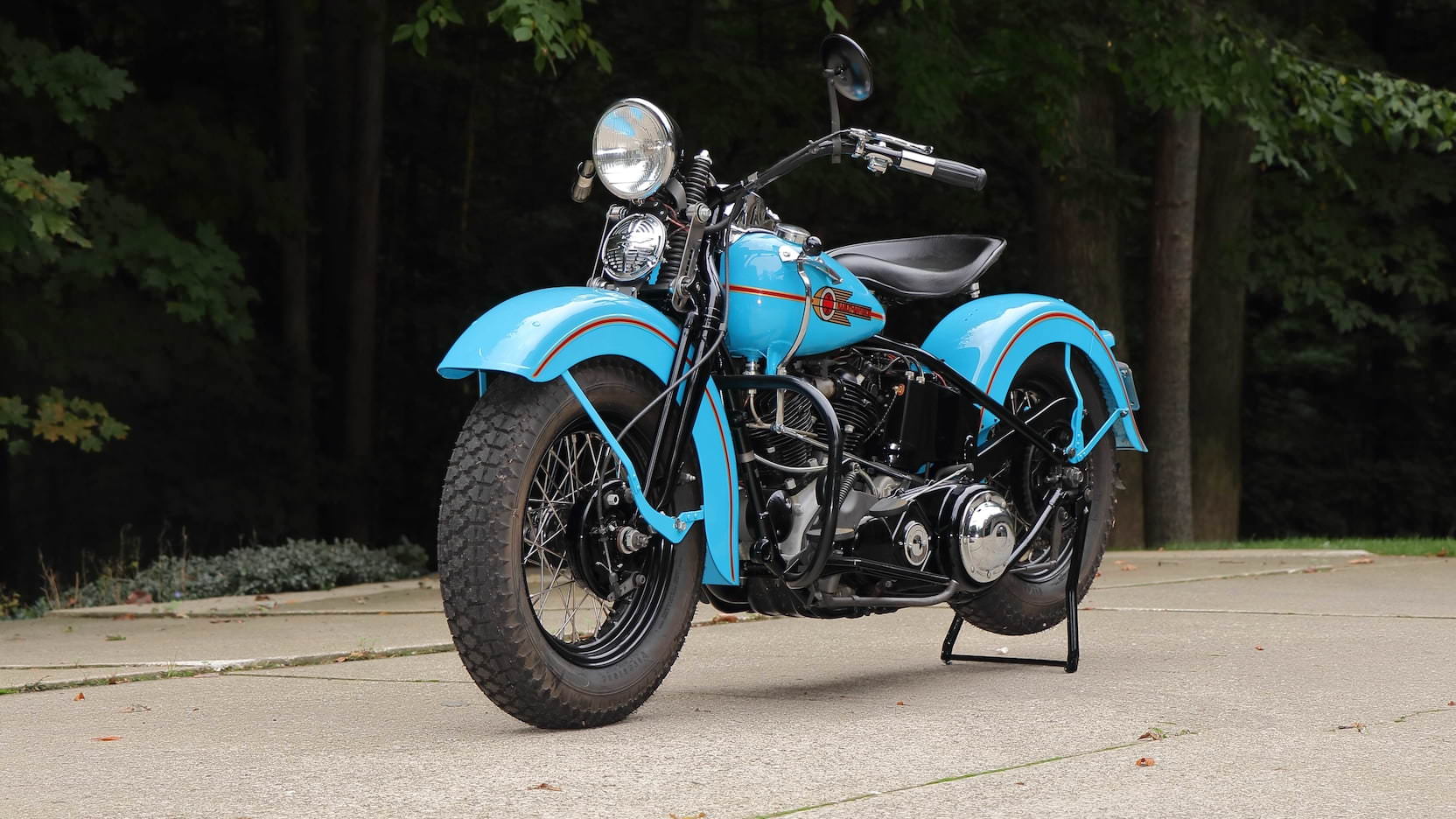