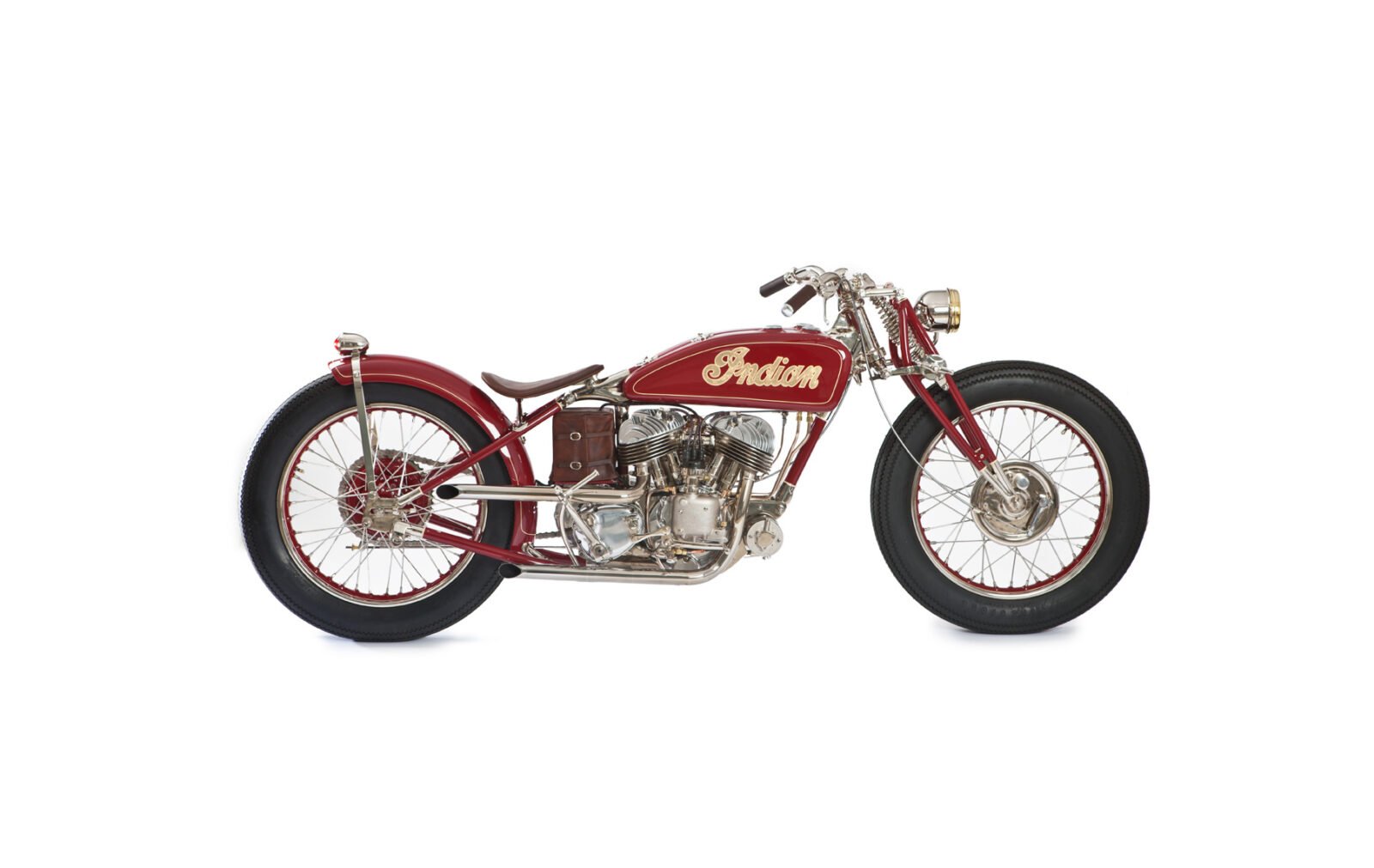 The Indian Scout was introduced for the first time in 1919, and quickly established itself as one of America’s most important and successful early motorcycles. Modified Scouts were a regular fixture at race tracks and hill climbs around the United States, where its iconic fuel tank between the top frame tubes, air-cooled 606cc V-twin and deep red colour scheme quickly worked their way into the hearts and minds of the first generation of motorcycle racers.

In 1928 Indian released the updated Scout -called the 101 Scout. This new bike incorporated a series of updates including a reworked frame, a tweaked 45 cubic inch engine and modified front suspension. The 101 Scout is often referenced as the single greatest motorcycle ever produced by the marque – so with this in mind it should be no surprise that when the team at The GasBox were looking for an Indian to rebuild to take the the 100th Anniversary of Indian Motorcycles at the Quail Motorcycle Gathering, they chose the styling of the 101 Scout.

As a base for the new project a 1940 741 Military Scout was acquired from eBay, it was in appalling condition and required work 18 hours a day 7 days a week for 3 months to get it into the condition it’s in now. Rather than re-write the build process for this bike I’m going to let Jesse and Kris tell you in their own words below:

The Indian placed second in the Custom Class at Quail. It was a proud moment when he rode it on stage to collect his award. This was Jesse’s first time being in the show: The motorcycle started out as a 1940 741 Indian military scout. The design concept was to make it look like the styling of the late 1920’s scouts.

First the top frame rail was cut and raised to frame the shape of the fuel tanks. The frame was then stretched 4” to move the downtube in front of the generator instead of behind it, by doing this, the line of the motorcycle is cleaned up by not having a
generator sticking out. The stance was next, the lower girder links were stretched 3/4 of an inch for rake and the front axle position was raised 3 inches for the correct ground height in order to accommodate both front and rear 19” wheels. The top of the girder was narrowed 2” to eliminate the bulky look.

The fuel tanks were hand formed from sheets of .080” aluminum to copy the look of 1920’s Indian tanks. The handlebars were made from cutting up sets of Harley Panhead bars to utilize original internals and designed after original Indian scout bars. The front hub is original Indian and the rear is triumph. The rims are Dunlop’s. The headlamp is a 1920’s automotive lamp and the bezel was hand spun from brass to copy the original since it was in too bad of condition to reuse.

For the drive train, the Indian engine was rebuilt with new hardparts and a Norton Commando 4-speed transmission was chosen in exchange for the OEM Indian 3- speed. New engine plates were made and the scout primary was cut in half, offset and mated with a 1920’s Indian outer primary. All of this was done in order to accommodate the Norton diaphragm clutch. The Norton engine sprocket was bored out and welded to the machined down Indian front sprocket, then re-hardened.

All aluminum was polished, all steel was nickel plated, and all cast iron was electroless plated. The entire frame and fork were nickel plated then painted Indian red.

Visit GasBox here to see more of their work. 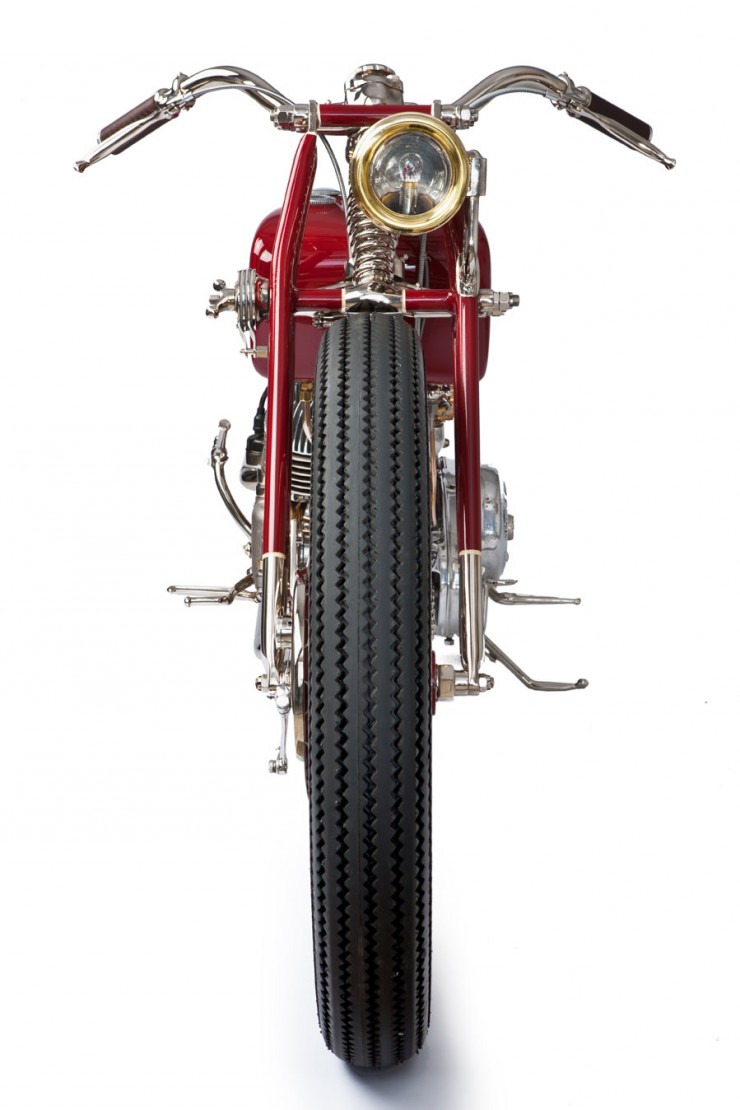 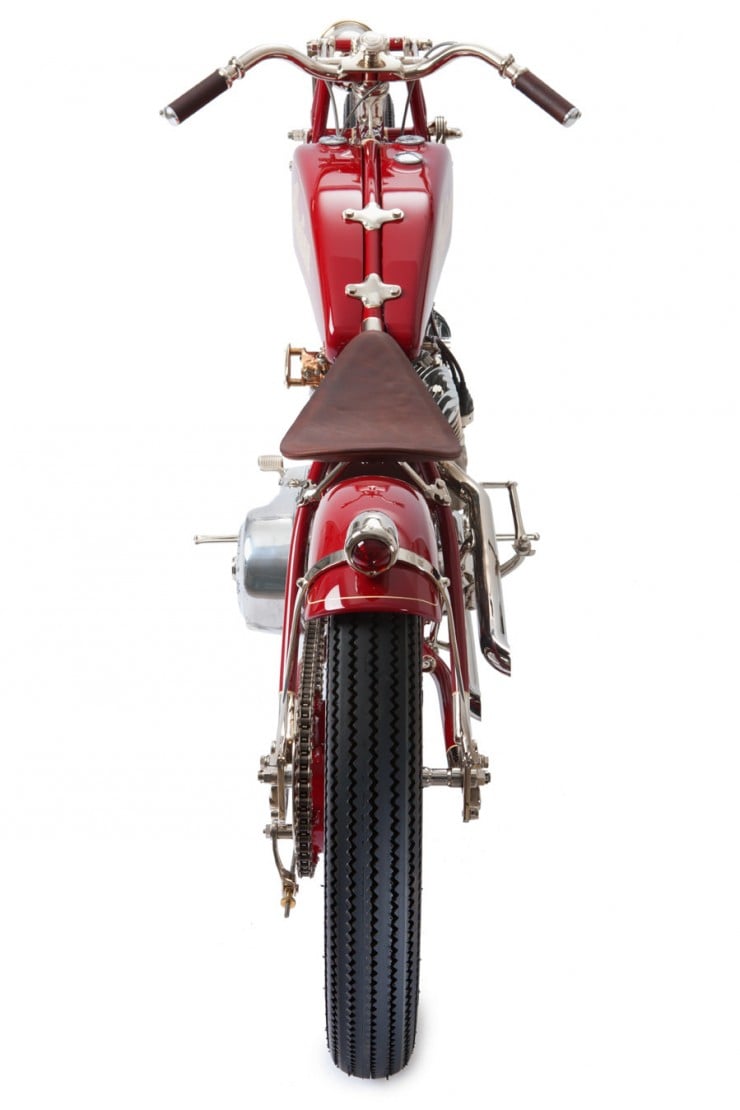 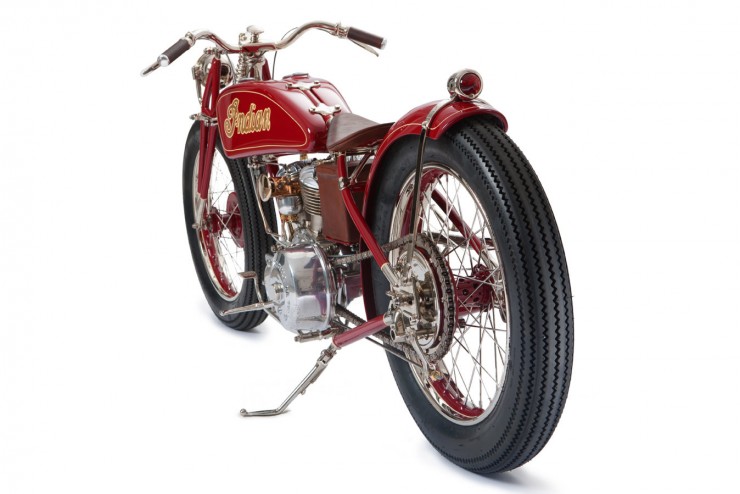 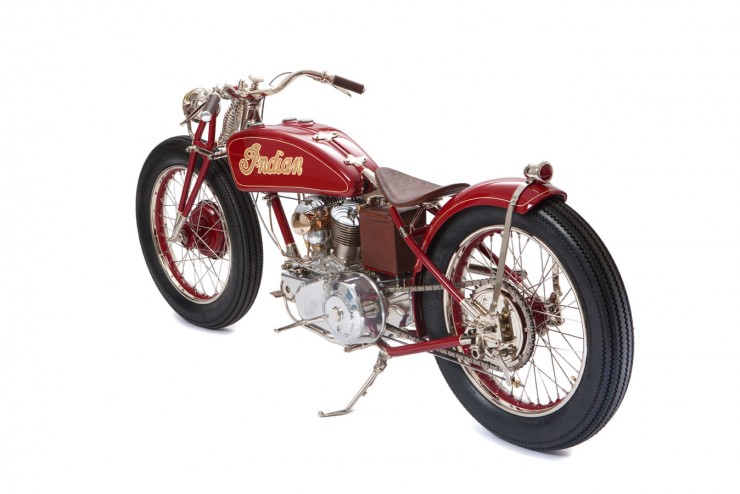 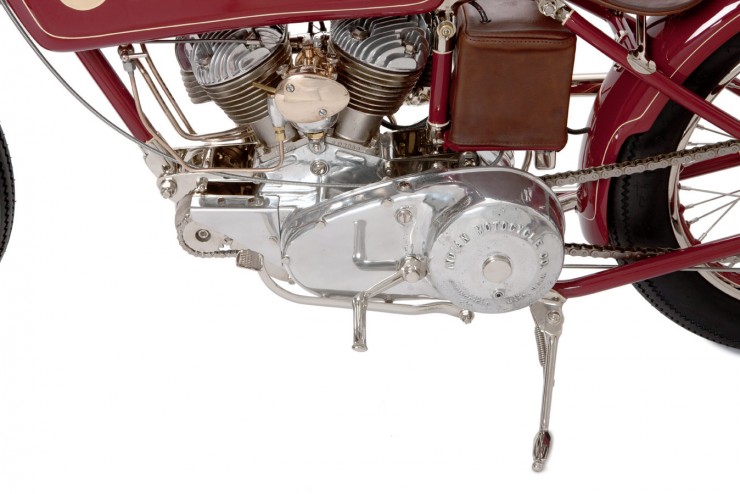 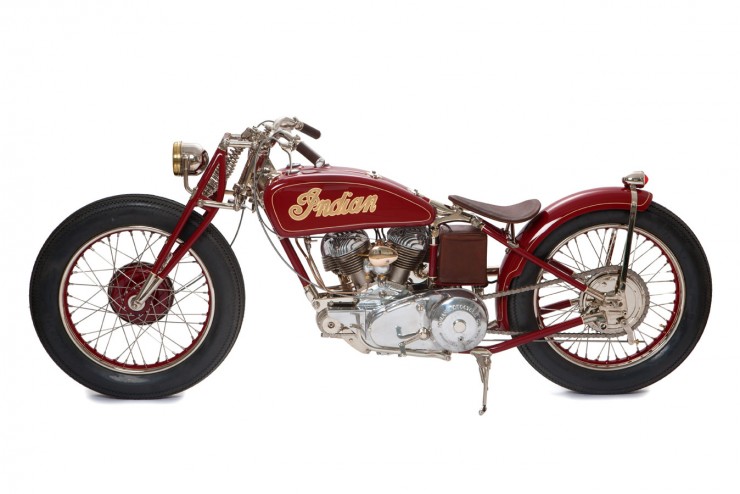 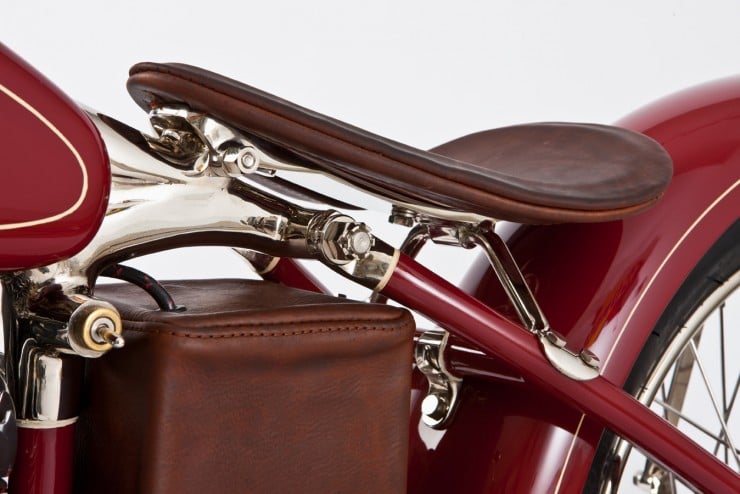 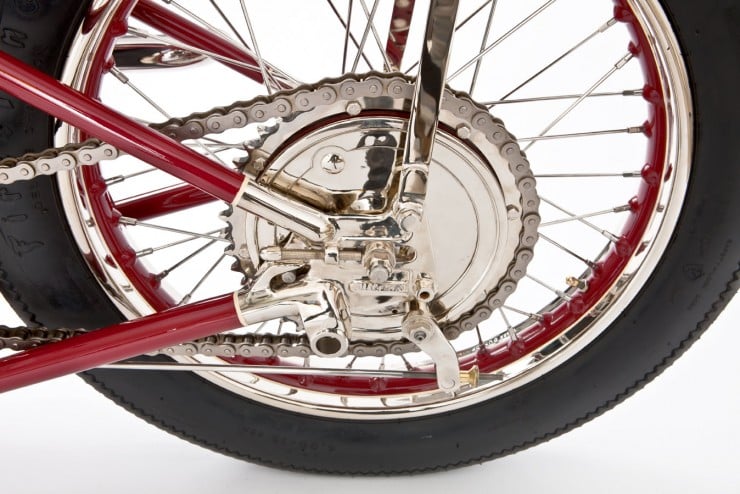 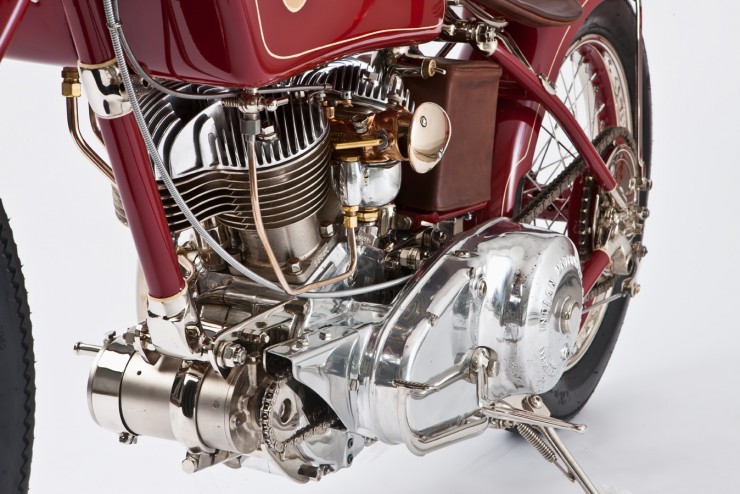 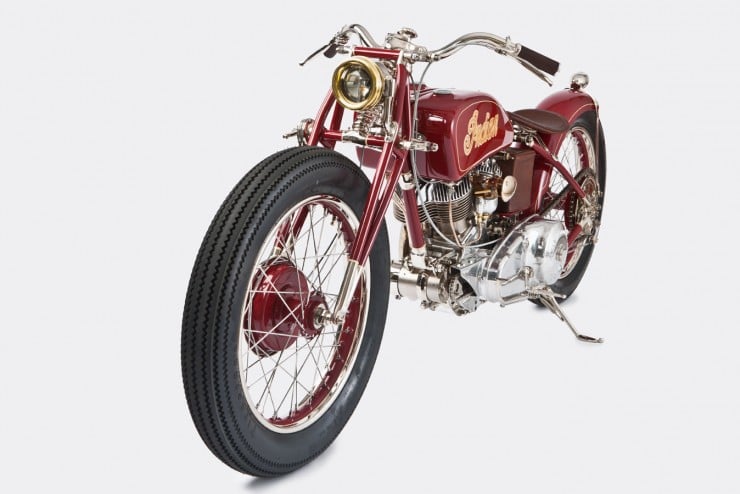 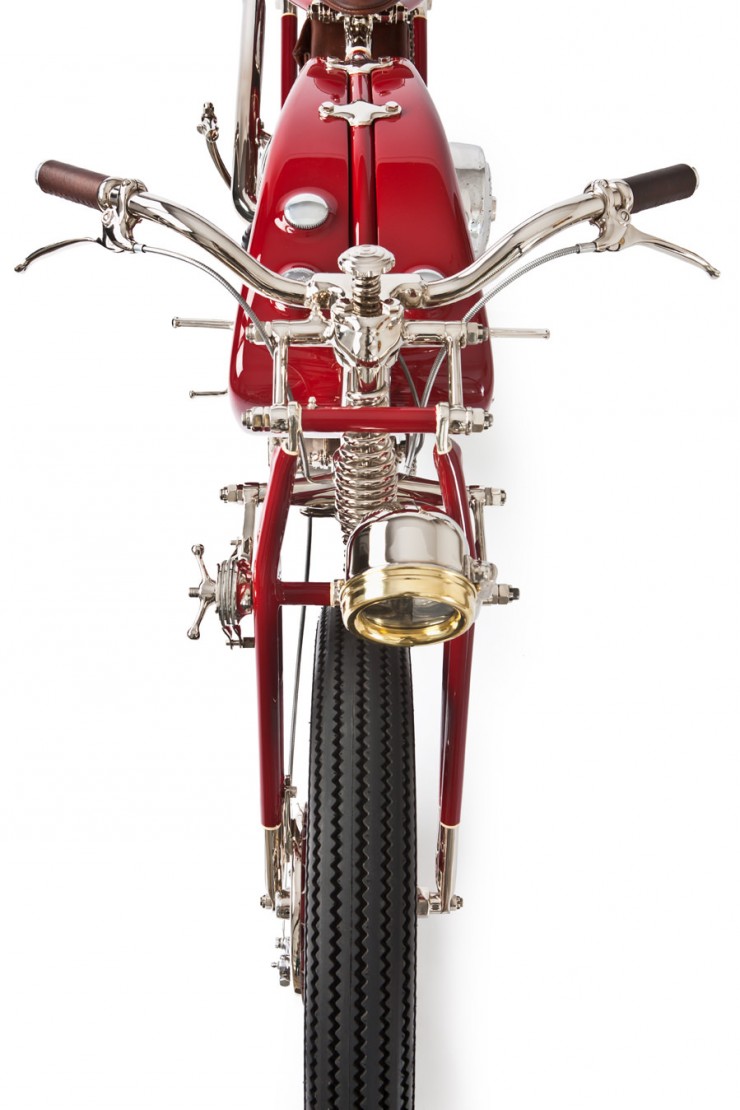 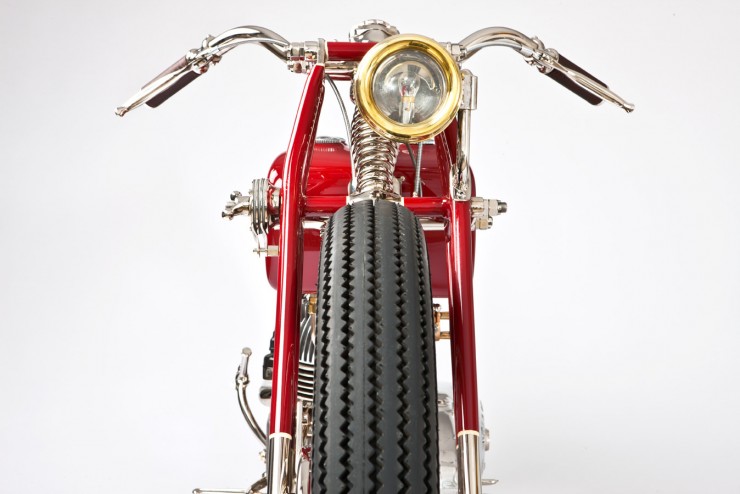 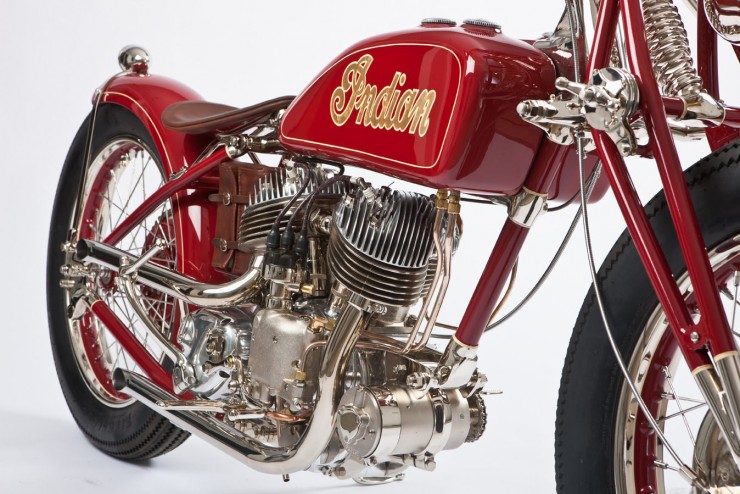 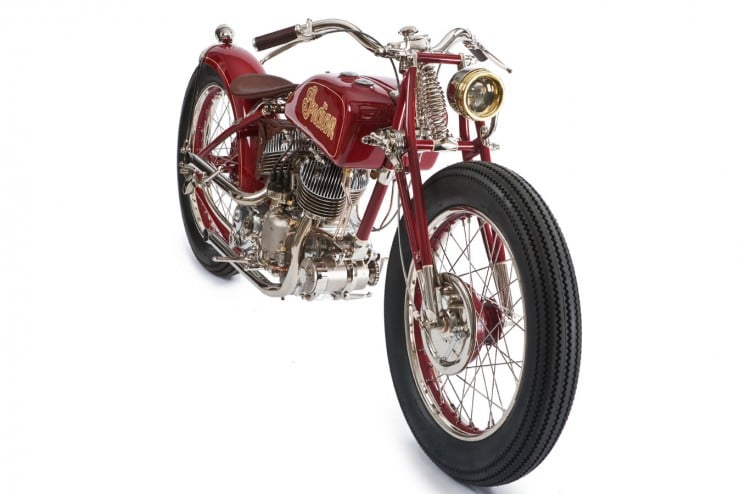 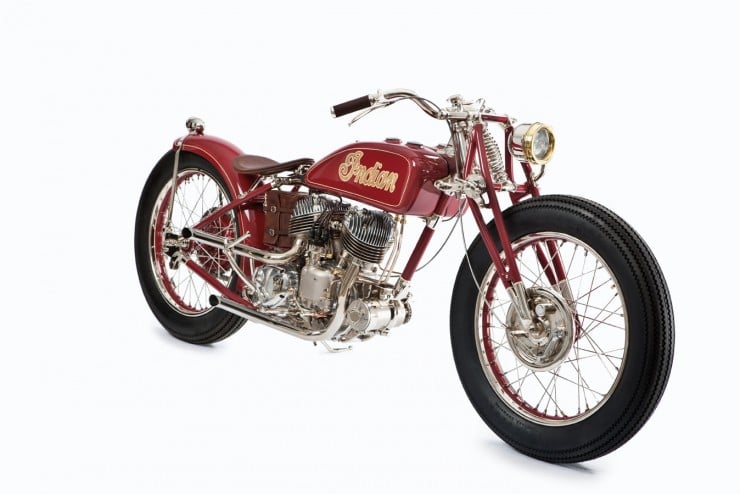 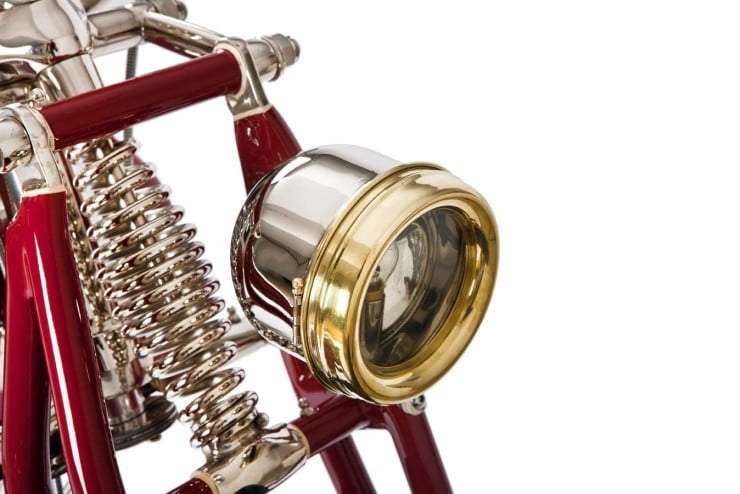 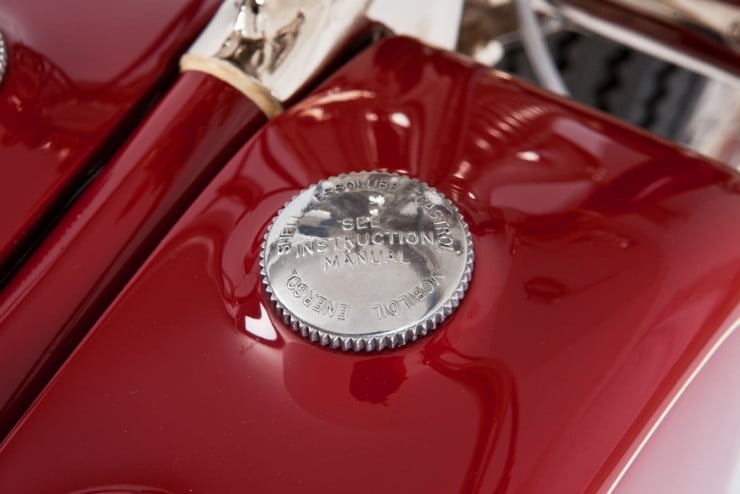 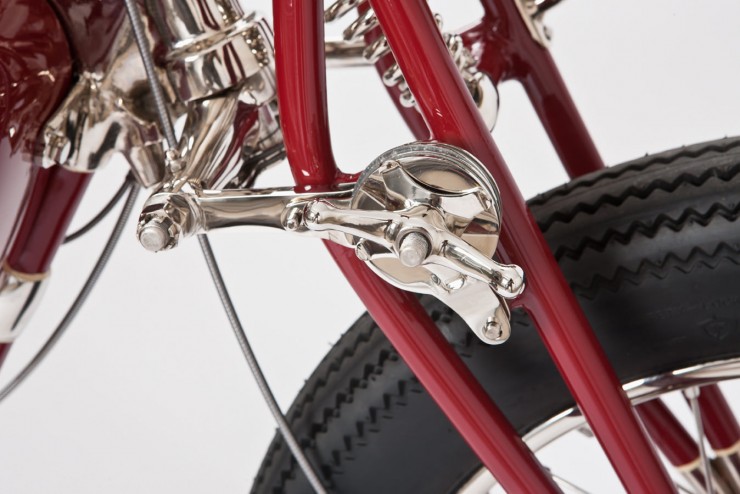 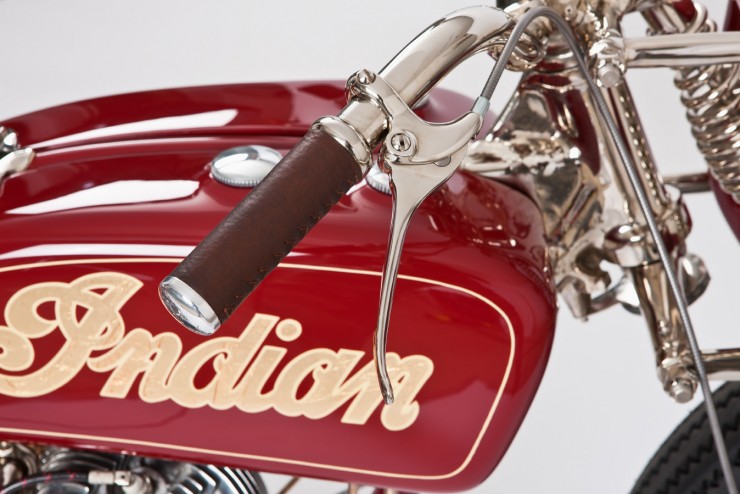 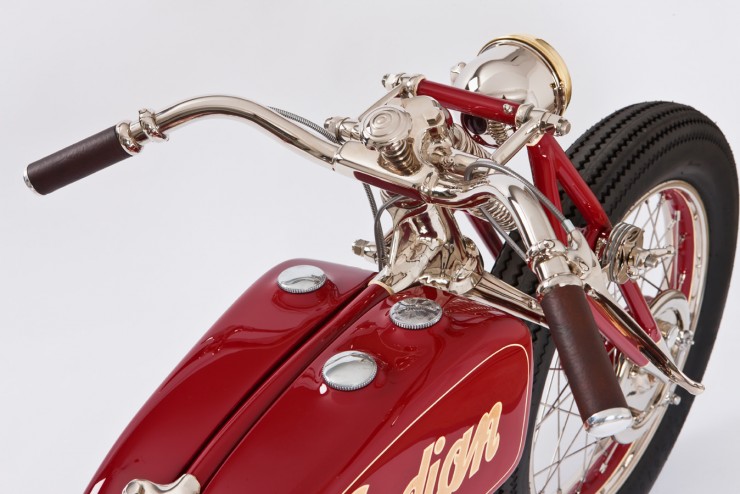 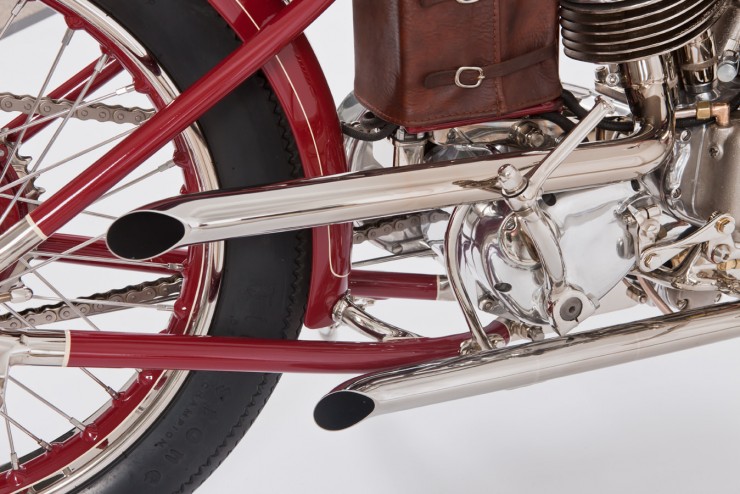 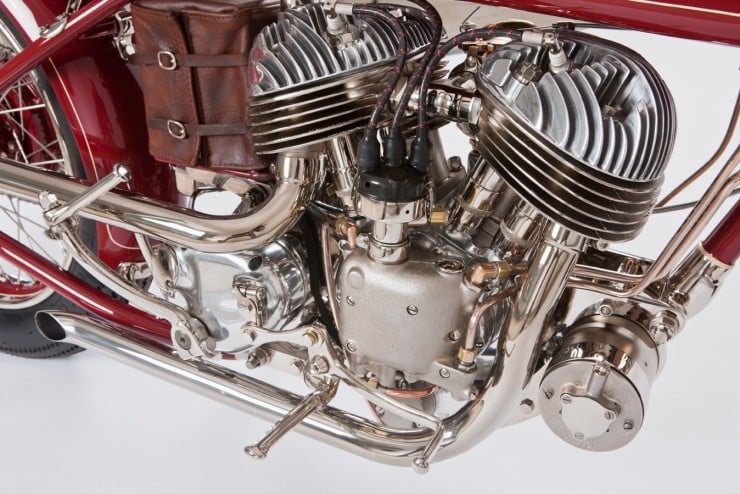 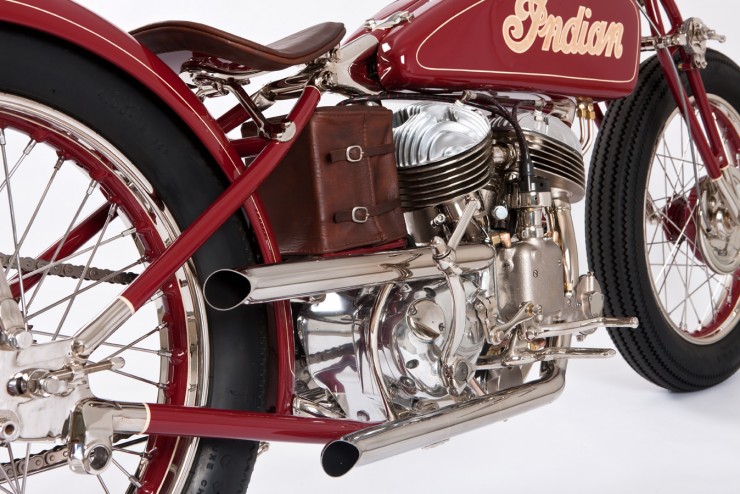 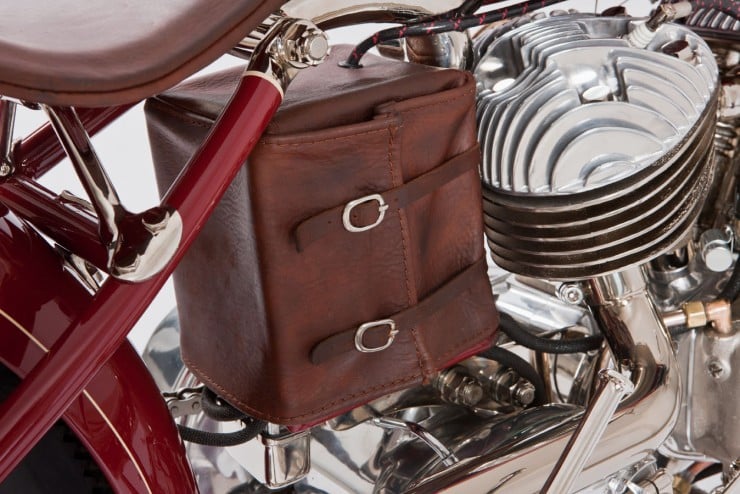 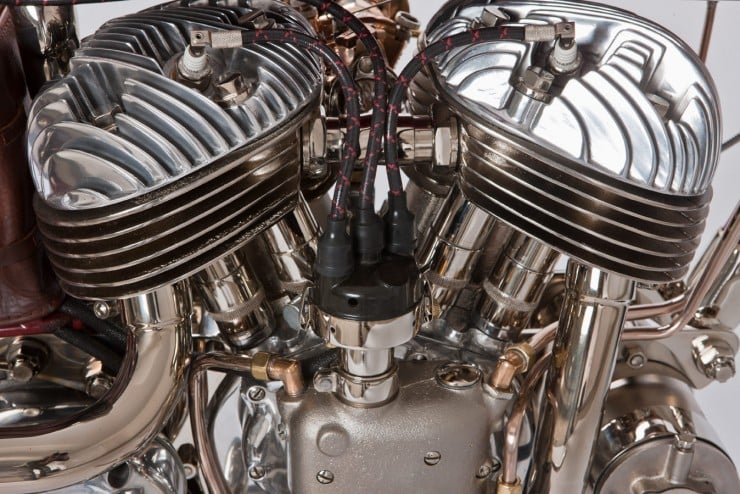 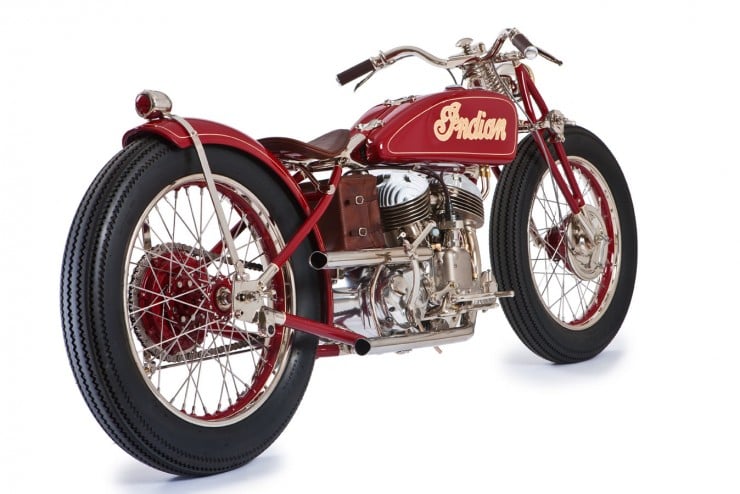 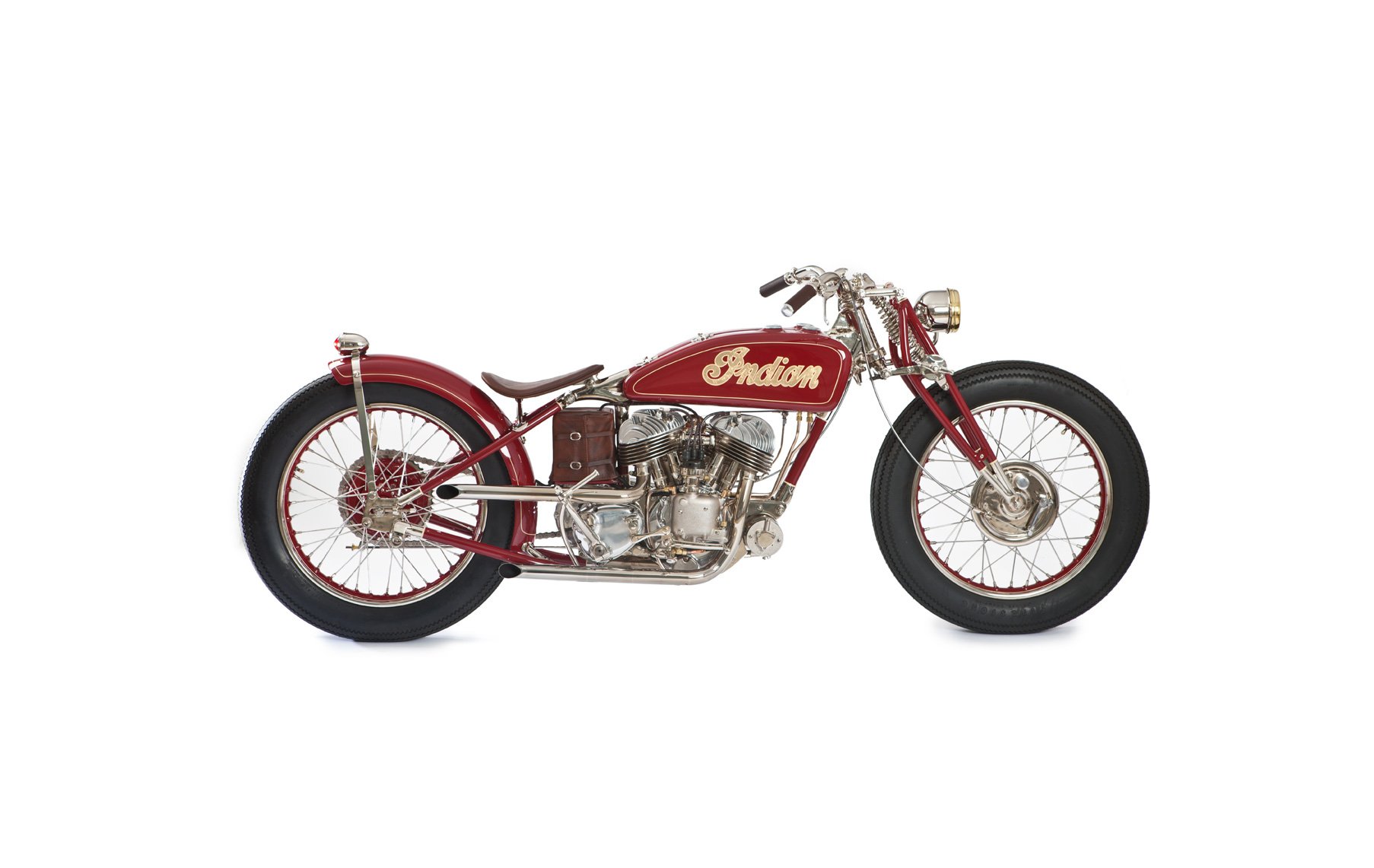 The Droog Moto Mini Fighter is a new release from one of the custom motorcycle world’s most unusual garages. The concept for the…