The Fiat Dino coupé is the far more attainable sibling of the peerless Ferrari Dino, both cars shared the same engine and the same basic mission – to sell in high enough numbers to homologate the Ferrari-designed 2.0 litre V6 for Formula 2 racing.

In 1965 the FIA drew up new rules for Formula 2 racing that would be introduced for the 1967 season. For Ferrari they were a disaster. The new rules required that a comparable engine be sold in a publicly-available road-car with a minimum of 500 units produced per a year.

These production numbers were far beyond Ferrari’s capabilities at the time – in the mind of company founder Enzo Ferrari they were essentially a Formula 1 team funded by selling exceedingly high-end performance cars to the world’s rich and famous.

At the time Ferrari was dealing with this rule change their countrymen over at Fiat were quickly realising they needed an inspiring new sports car to keep the company exciting, and to reference the mighty Grand Prix winning Fiats of the past.

Members of the Fiat board took a meeting with Enzo Ferrari and a plan was quickly hatched to produce two cars – a Fiat and a new car from Ferrari that would be sold under a new marque named after Enzo’s late son, Dino. Although this model would not be badged as a Ferrari, it’s typically referred to as a “Ferrari Dino” to differentiate it from the Fiat Dino.

Once the engine design was settled it was agreed that it would be built by Fiat to ensure the numbers could be met, and the cars would be built by their respective companies. Fiat offered both a spider (convertible) and a coupé with several styling differences and a slightly longer wheelbase on the coupé to accommodate two rear seats.

From start to finish the project took Fiat only 18 months – they had to rush to meet the FIA homologation deadline. The Fiat Dino Coupé was penned by the great Giorgetto Giugiaro, the design was modern and sleek with seating for 4 adults, a subtle Coke bottle profile, a sloping rear roofline, and a handsome, purposeful front end. 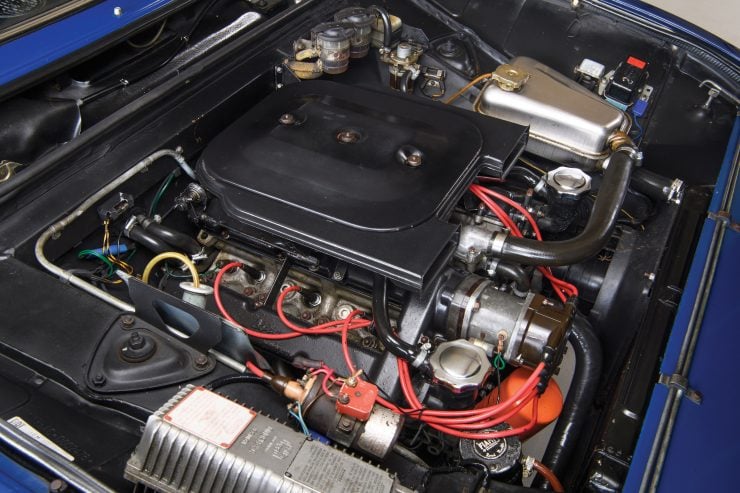 Power output was claimed as 160 bhp by Fiat and 180 bhp by Ferrari, however the engines were identical. Confusion between SAE and BHP would later be blamed for the discrepancy, however many have speculated that it was a marketing ploy by Ferrari.

The engine was front mounted in the Fiat and rear-mid mounted in the Ferrari version, the Fiat featured a 5-speed all-synchromesh transmission, a limited slip differential, disc brakes on all four corners, independent suspension up front, and a live axle in the rear.

The first Fiat Dino model was built from 1967 till 1969 when the new 2.4 litre variant was introduced with a heavier but more powerful iron-block V6, independent rear suspension, and a number of other upgrades.

Today the Fiat Dino offers a lot of car for the money, they sell for far less than their Ferrari counterparts but share a lot of the same DNA, not to mention inimitable Giugiaro styling, and bucketloads of ’60s Italian charm.

The car you see here is a 1968 Fiat Dino Coupé is 1 of just 384 made, it was ordered new by a Parisienne industrialist in a beautiful medium blue over red leather. It was sold on to an enthusiast in 1975, this owner kept the car for 35 years and maintained it in excellent condition – it’s still equipped with its original 14″ Cromodora alloy wheels, Blaupunkt Frankfurt radio, with its red leather interior, owner’s handbook, and jack.

The odometer now shows just 91,000 kms from new, it’s due to cross the auction block with RM Sotheby’s in Paris on the 6th of February with an estimated value of between €40,000 and €60,000. If you’d like to read more about it or register to bid you can click here to visit the listing. 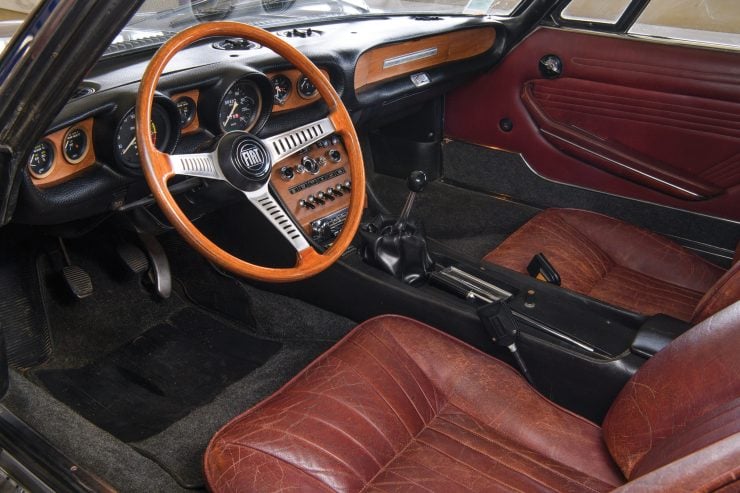