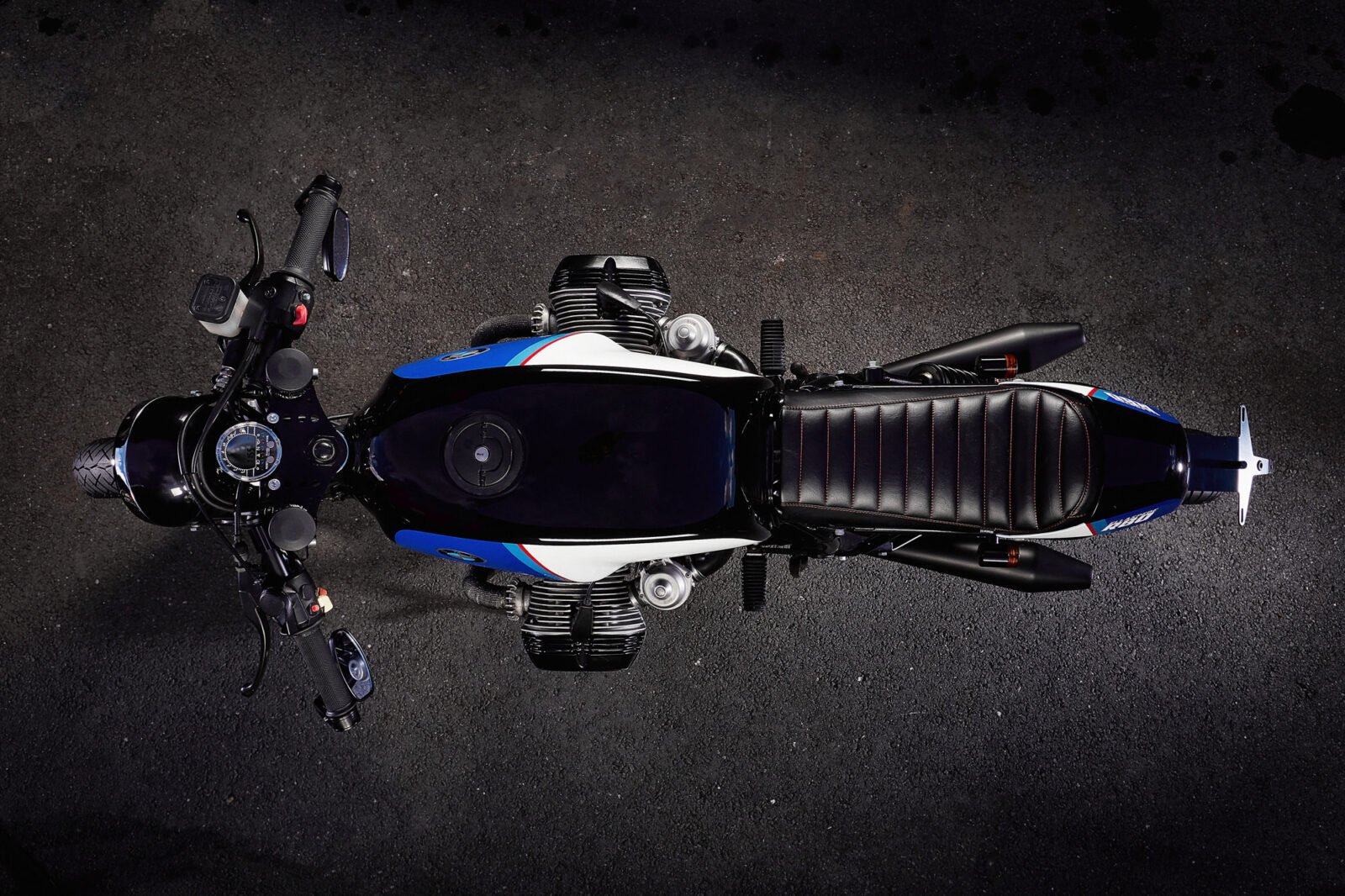 This post was written by Hughan Seary of Ellaspede, when possible we like to bring you the story of a build in the words of the people who built it, to offer a unique insight into their thought process and methods.

Lines. The lines of a bike are often overlooked or misunderstood; especially when it comes to custom builds. Sometimes bikes just look right, and more often than not it’s the visual lines of the bike that are a contributing factor.

A slightly raked (angled) line through the bottom of the seat and tank gives the bike a more aggressive stance, combined with a lower headlight that doesn’t extend above the top of the tank and visually you’re on the right track to a well aligned package that just looks ‘right’.

Granted these rules don’t apply to all customs, but in the case of Greg’s R80 here, it was an ideal application given the café direction of the build.

Not the original owner of this Ellaspede custom build, Greg was lucky enough to pick up the bike after we had already completed a number of modifications to transform the bike from original.

As is often the case with R-series with reasonable kilometres, the bike was in good condition mechanically and didn’t require much attention to the motor, diff or brakes. 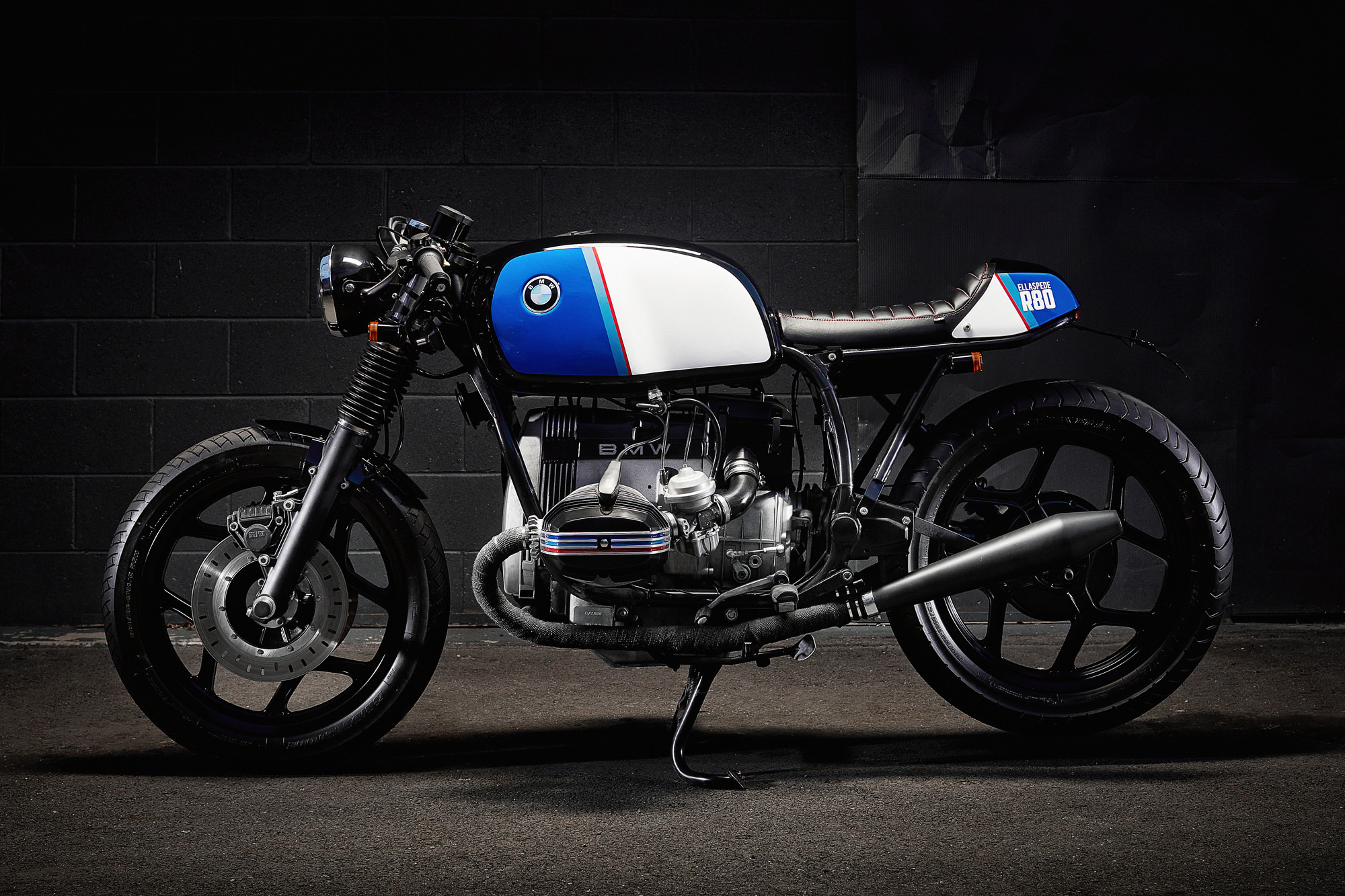 Unfortunately robust isn’t a term that can be used to describe the stock R-series subframes though, so we swiftly replaced the factory unit with an Ellaspede rear frame kit, which shortens and strengthens the rear while matching the line from the bottom of the tank.

The Ellaspede R-series seat pan and battery box also bolted in, making the whole rear transformation a painfully easy process. The seat was then foamed and upholstered to match our design, while a seat cowl from another manufacturer that matched the shape of the back of the tank was modified and fitted to complete the café look.

Lowering the factory front end and cleaning up the top triple tree in one fell swoop is an Ellaspede R-series lowering triple clamp. An added benefit of which is the slightly raked forward line through the bike, which is the look we were going for.

A six inch headlight, Acewell gauge, clip-on bars, bar-end mirrors and a custom front guard complete the front end changes. Specific attention was paid to the lowered positioning of the headlight and gauge, something we find is often overlooked on custom builds.

Often the achilles heel of old bikes, the electrical system was given a check over before being modified to suit the new electrics box under the seat. Completing the lighting package is an LED taillight, Daytona winkers and an Ellaspede universal tail tidy with LED number plate light.

The remaining stock parts and engine received a thorough cleaning before the front calipers, fork legs, swing arm, wheels and other various brackets were coated in a mix of satin and gloss black.

Enter Greg at a point where all the pieces of the puzzle were there and the lines were right, but it was dressed in a colour scheme that didn’t set him off. He wanted a tough custom café that wasn’t too vintage looking, and when his wife proclaimed that she liked the old colour he knew it was time to change. 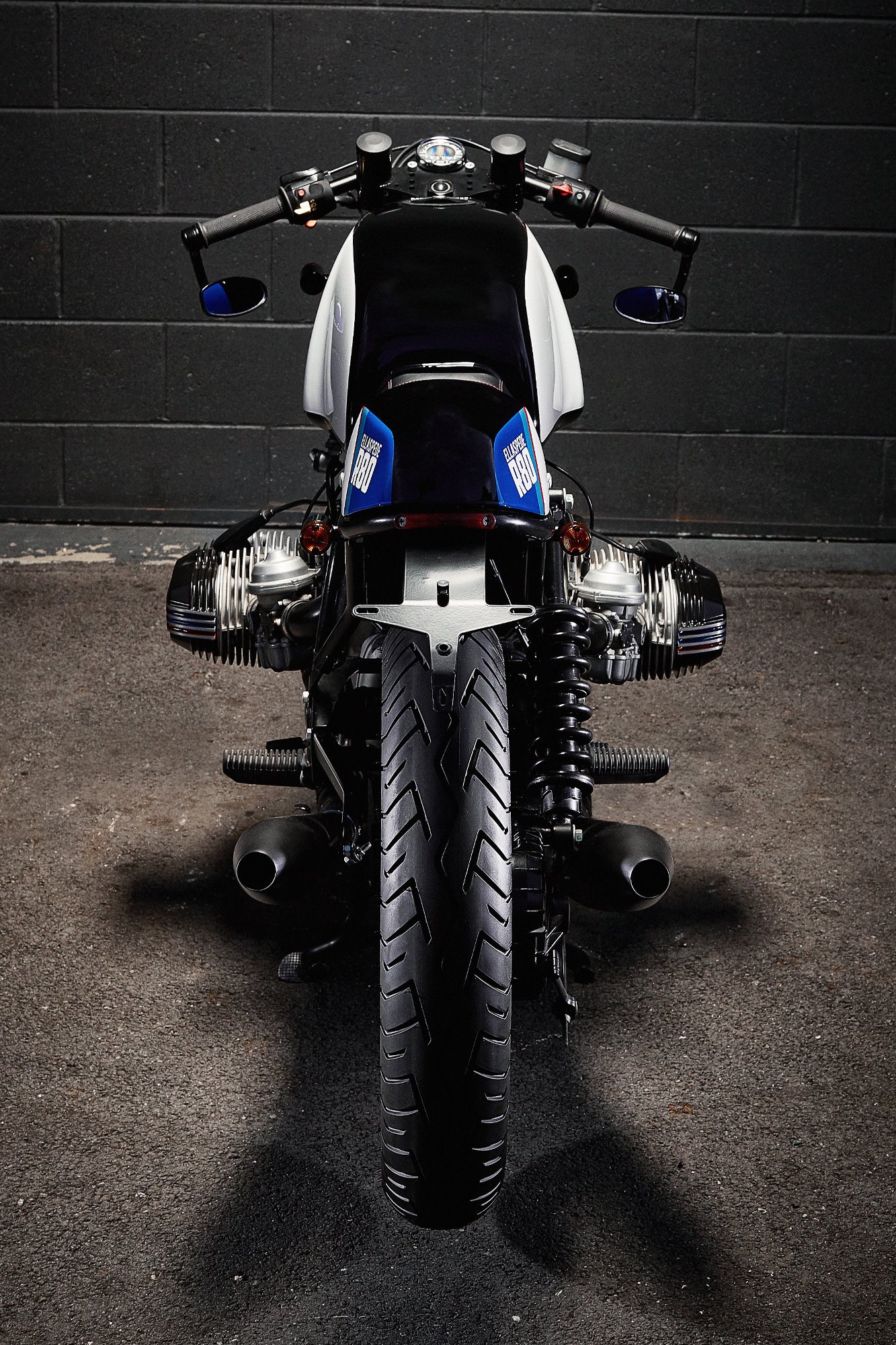 We were tasked with designing a livery that was tough, a little more modern and something that would minimize the size of the stock tank. Nothing’s more slimming than black, so it was an easy decision to coat the centre and the edges of the tank, cutting down the visual weight.

The M-sport livery has been done many times before, so we reworked the hues and focused on the darker blue to carry the colour scheme. Continuing the theme on an otherwise monotone lower half of the bike is some subtle stripes on the valve covers. A classic black café seat upholstery is tied into the M-sport theme with a red stitch.

Seemingly more than the sum of its parts, Greg’s R80 rides incredibly well for a bike of this style. Usually custom café racers are so stripped and aggressive that they’re uncomfortable unless you’re riding right on the edge, but with good seat padding, reasonable height clip-ons, mid mount pegs and a relatively short wheelbase this bike is a real ‘surprise packet’ as Greg puts it.

With a stack of other European bikes in the collection, it was only a matter of time before a BMW joined Greg’s garage. An ‘air head’ motor, classic café styling and a subtle M-sport livery make it a worthy representative for the Bavarian brand in Greg’s fleet.

We talk a lot about the lines of a custom bike and how good they make it look sitting still. But I guess the lines for this bike that really matter are the ones Greg’s now carving through corners on the way to his favorite coastal town. 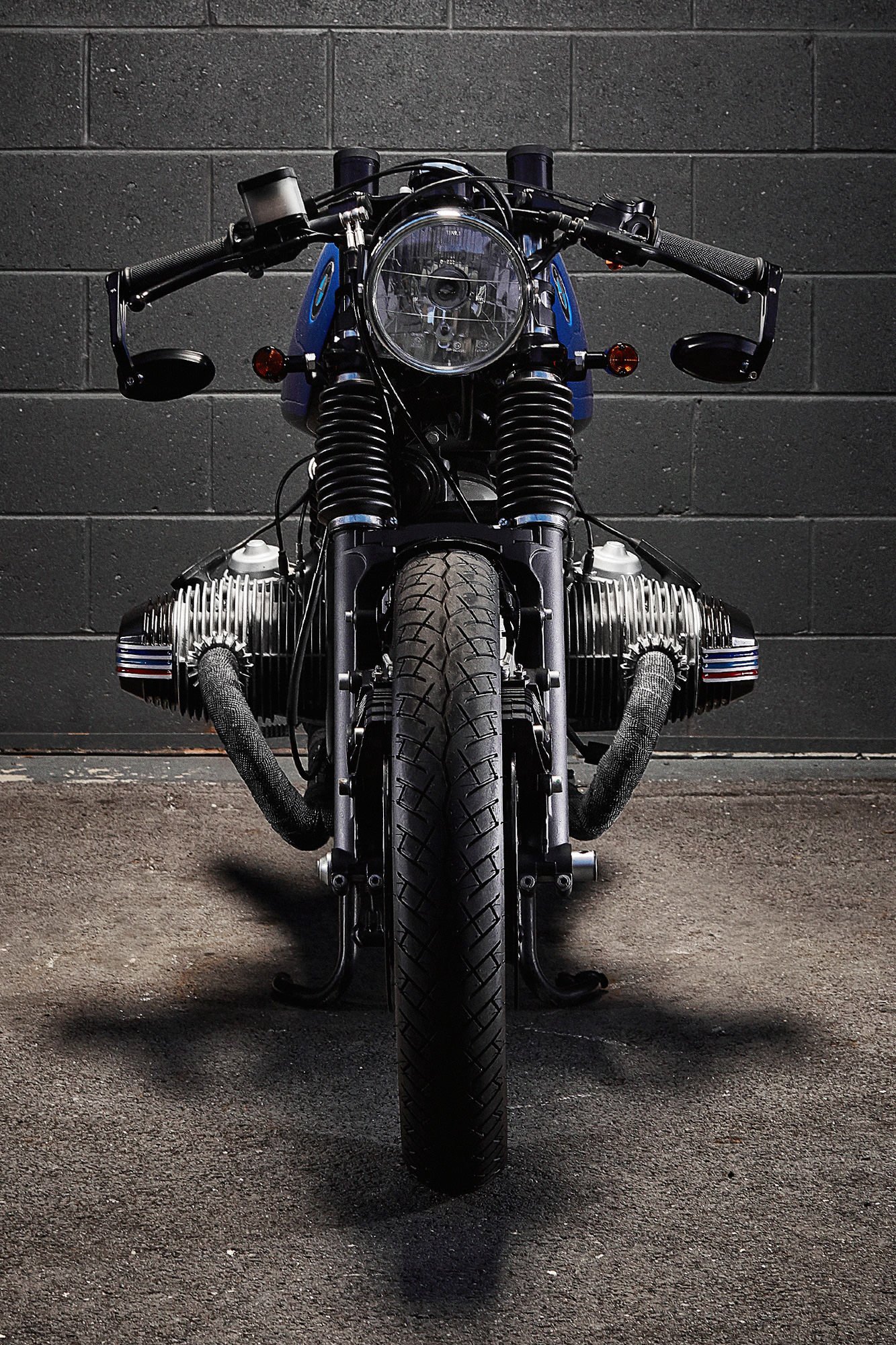 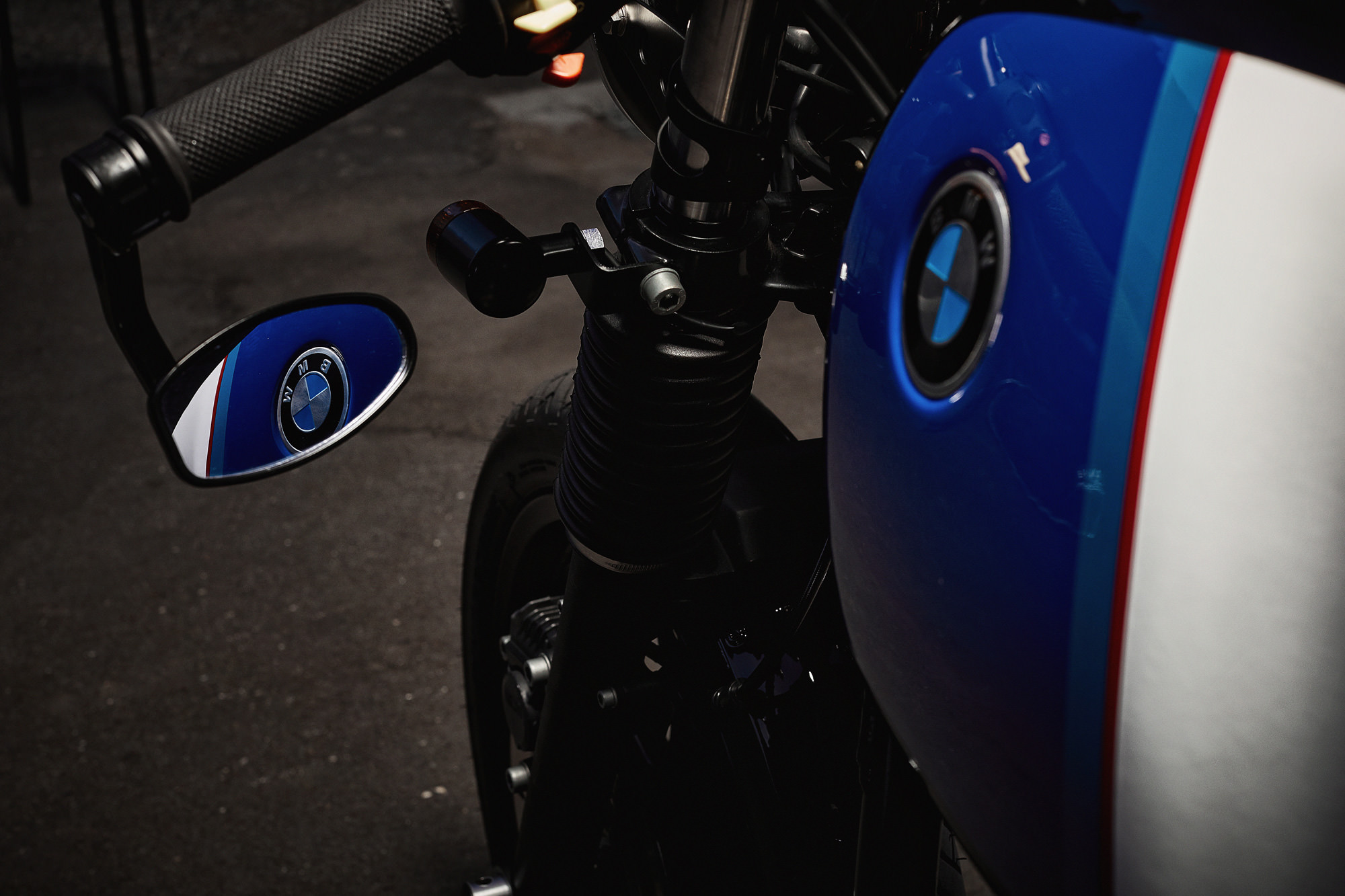 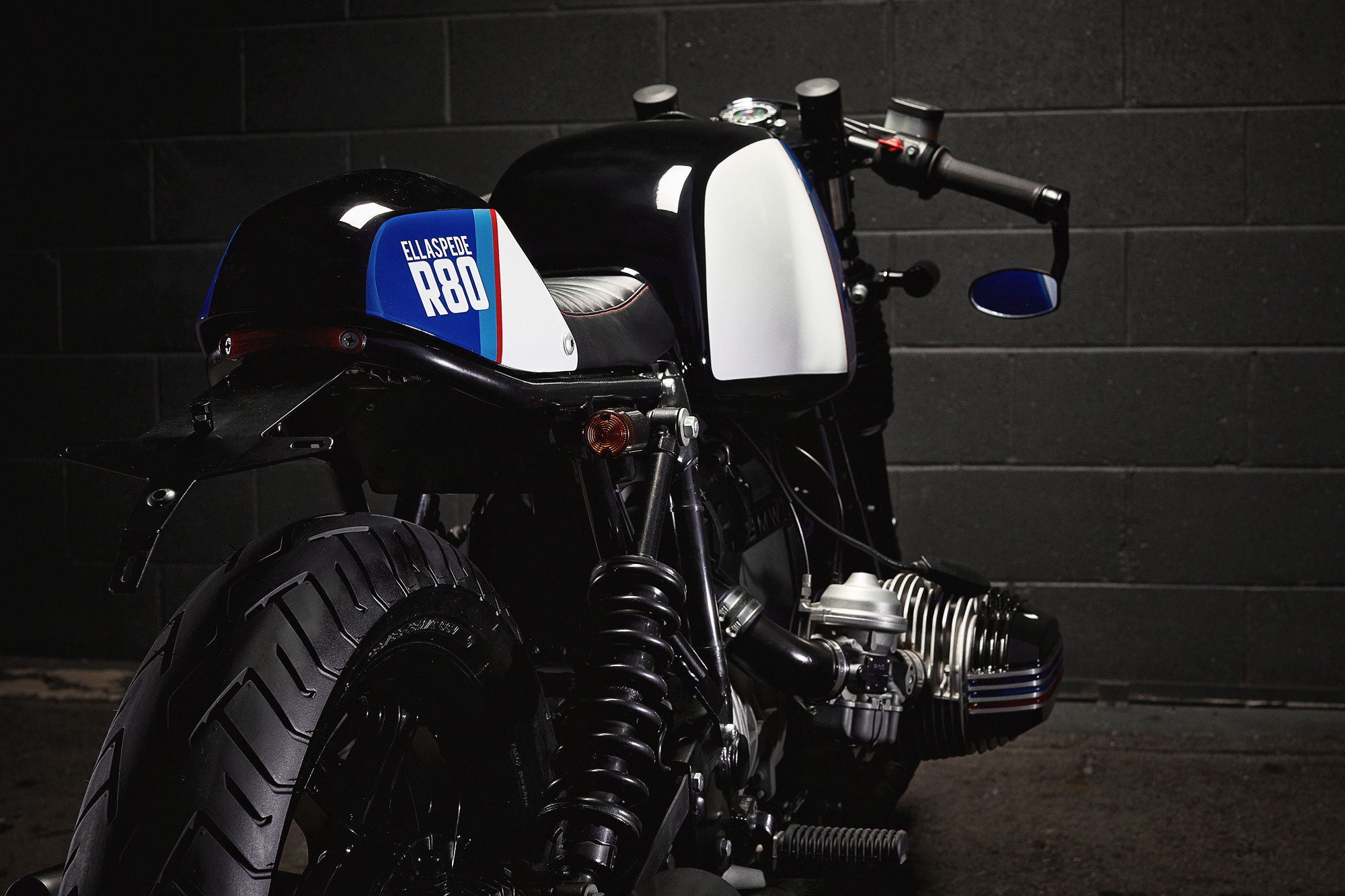 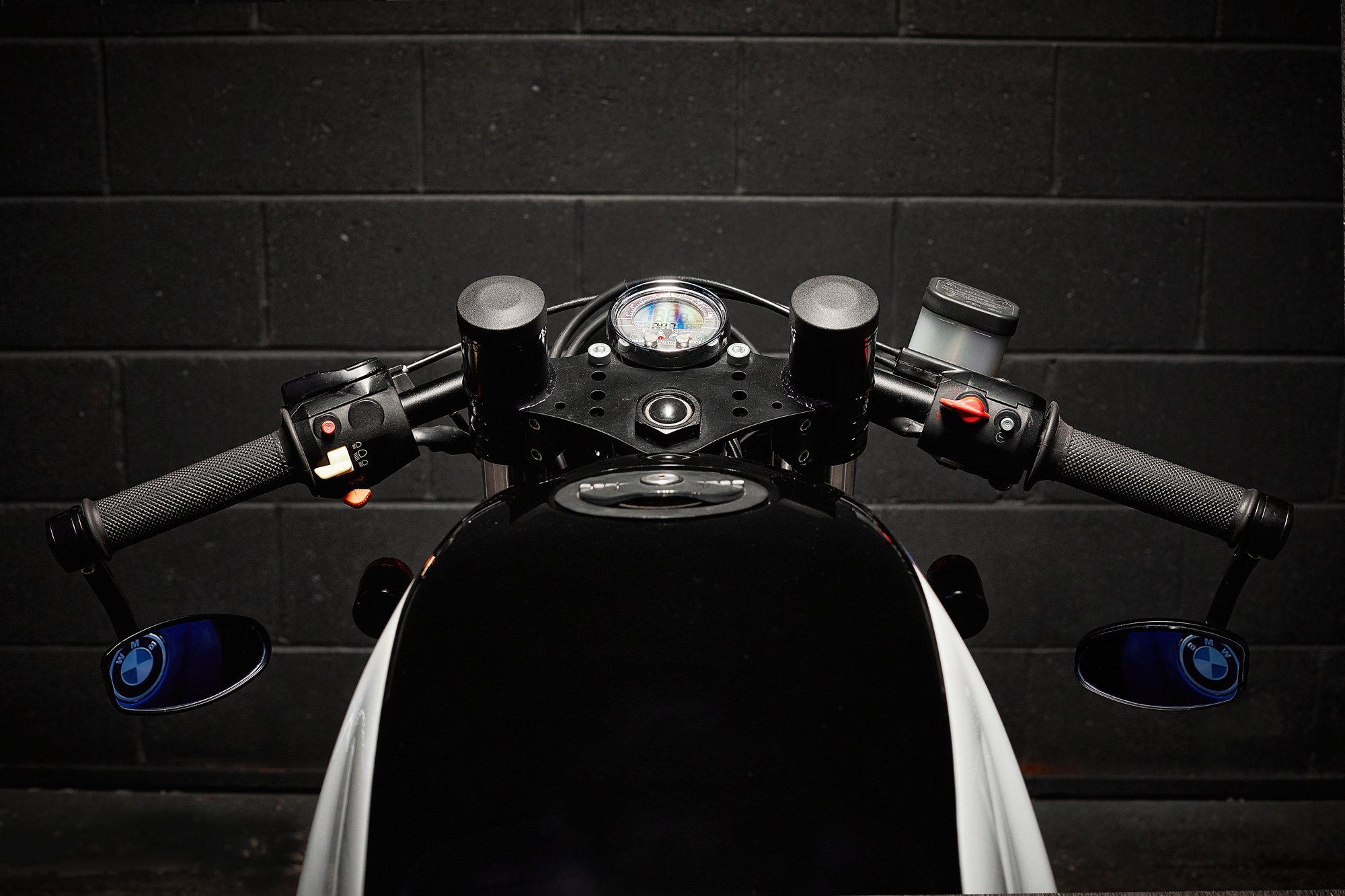 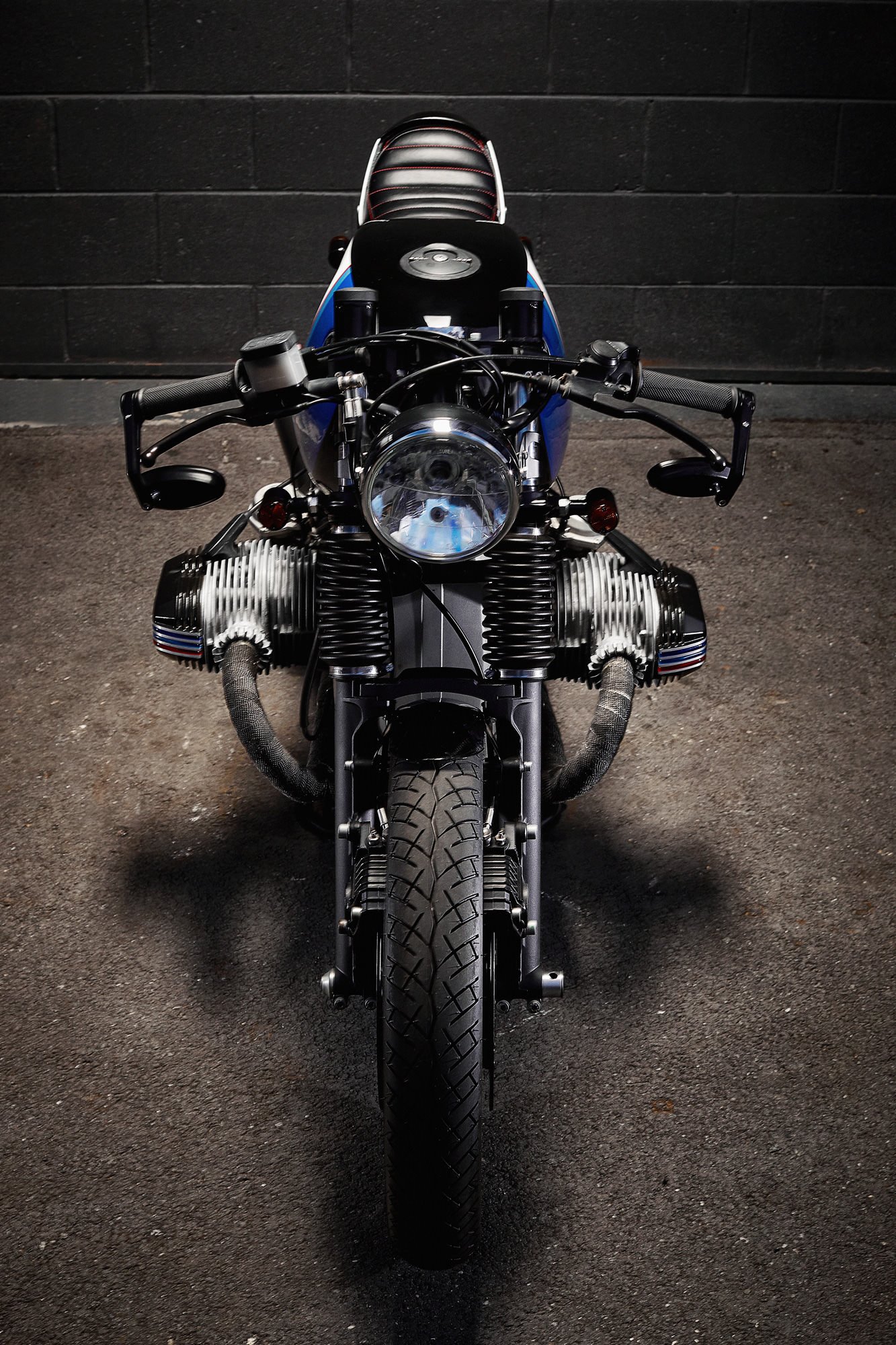 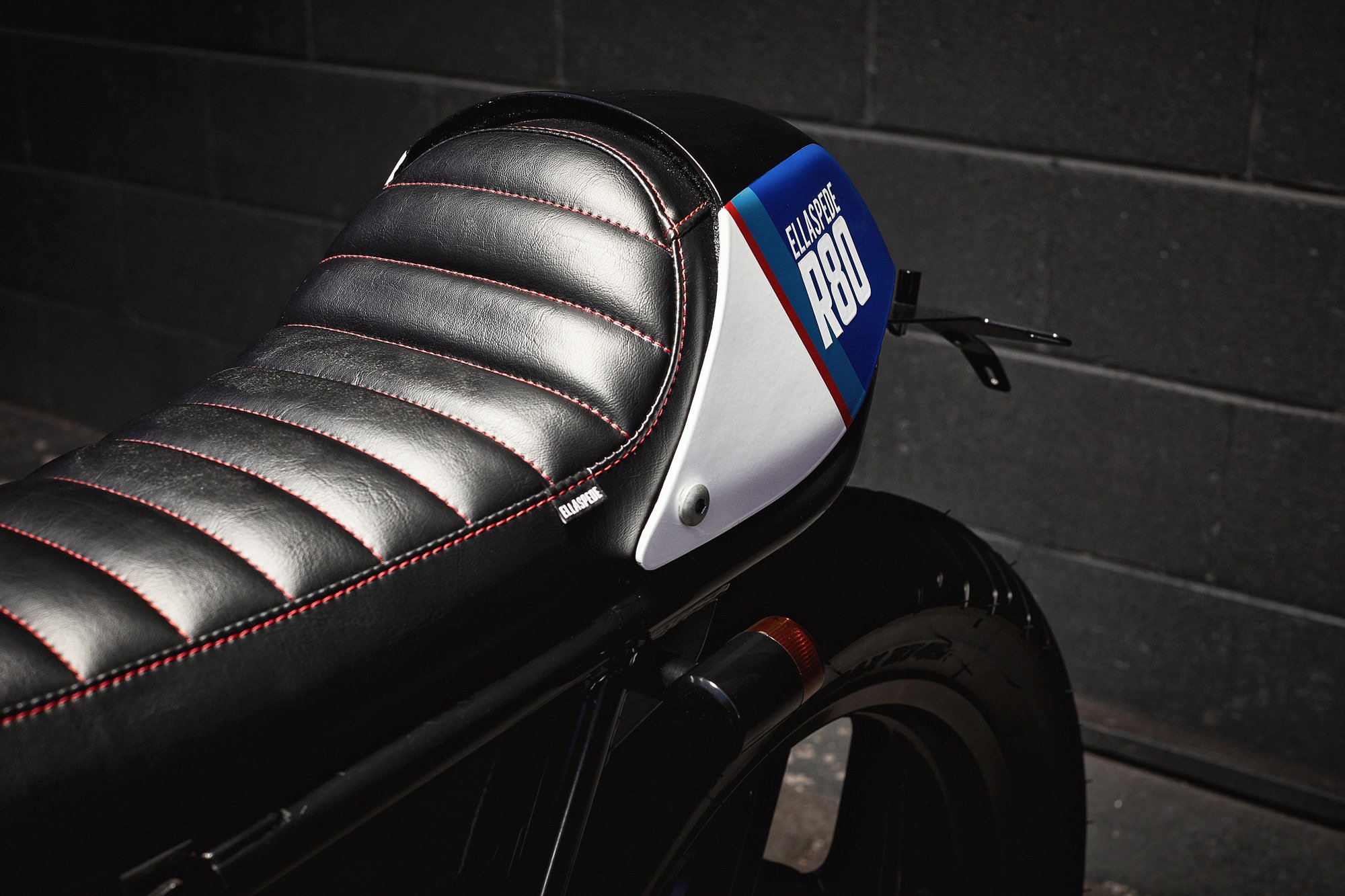 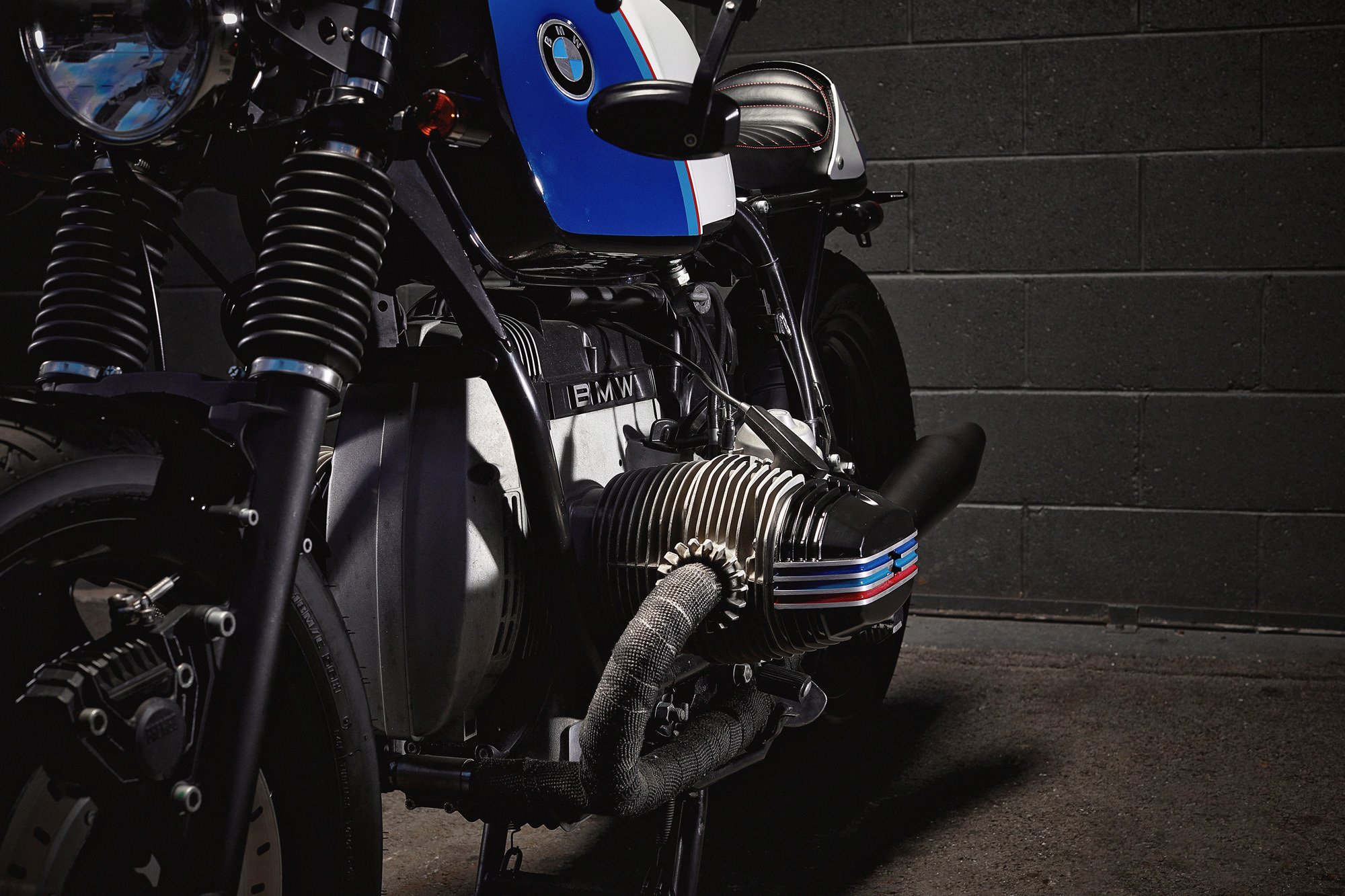 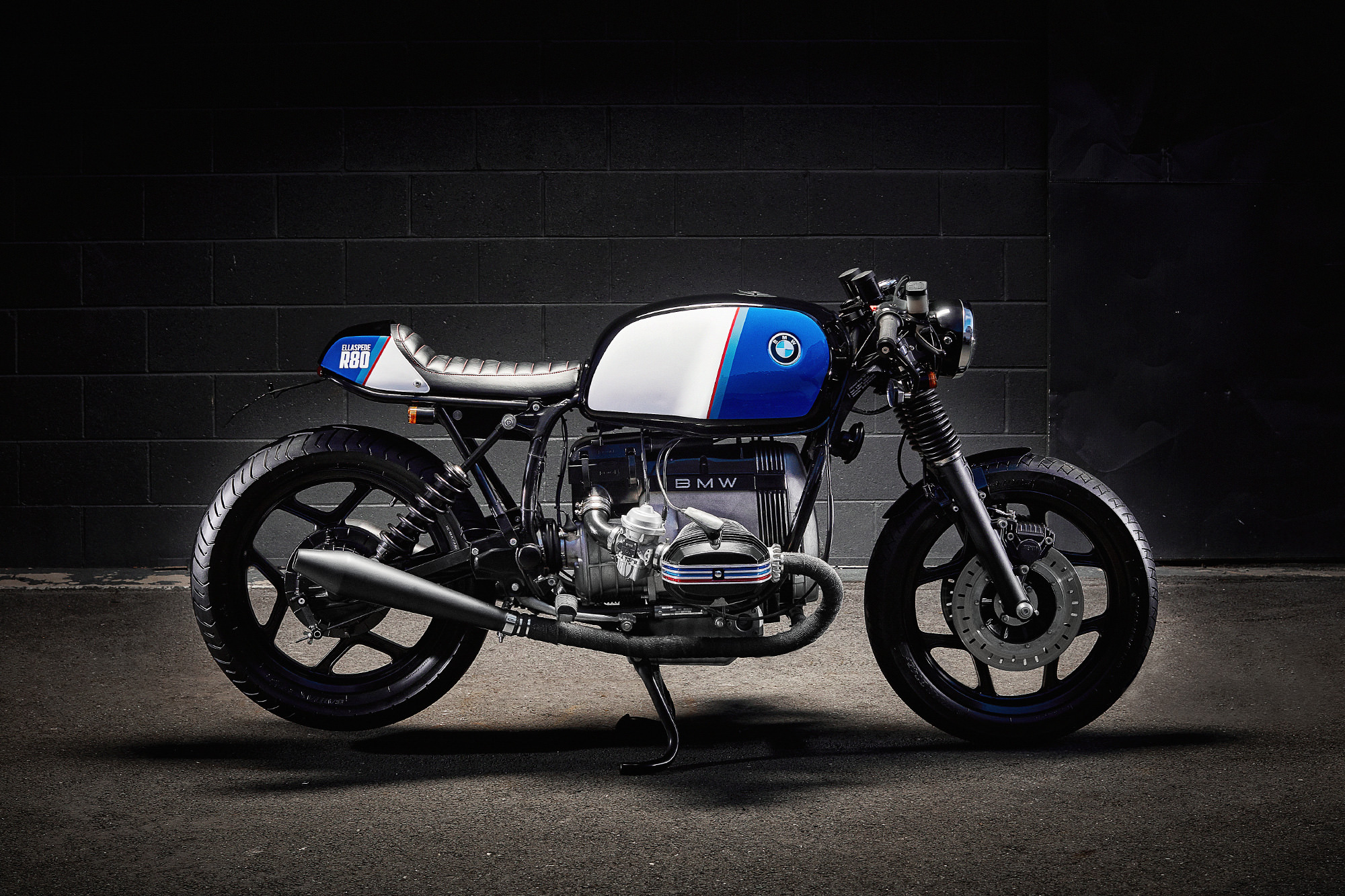 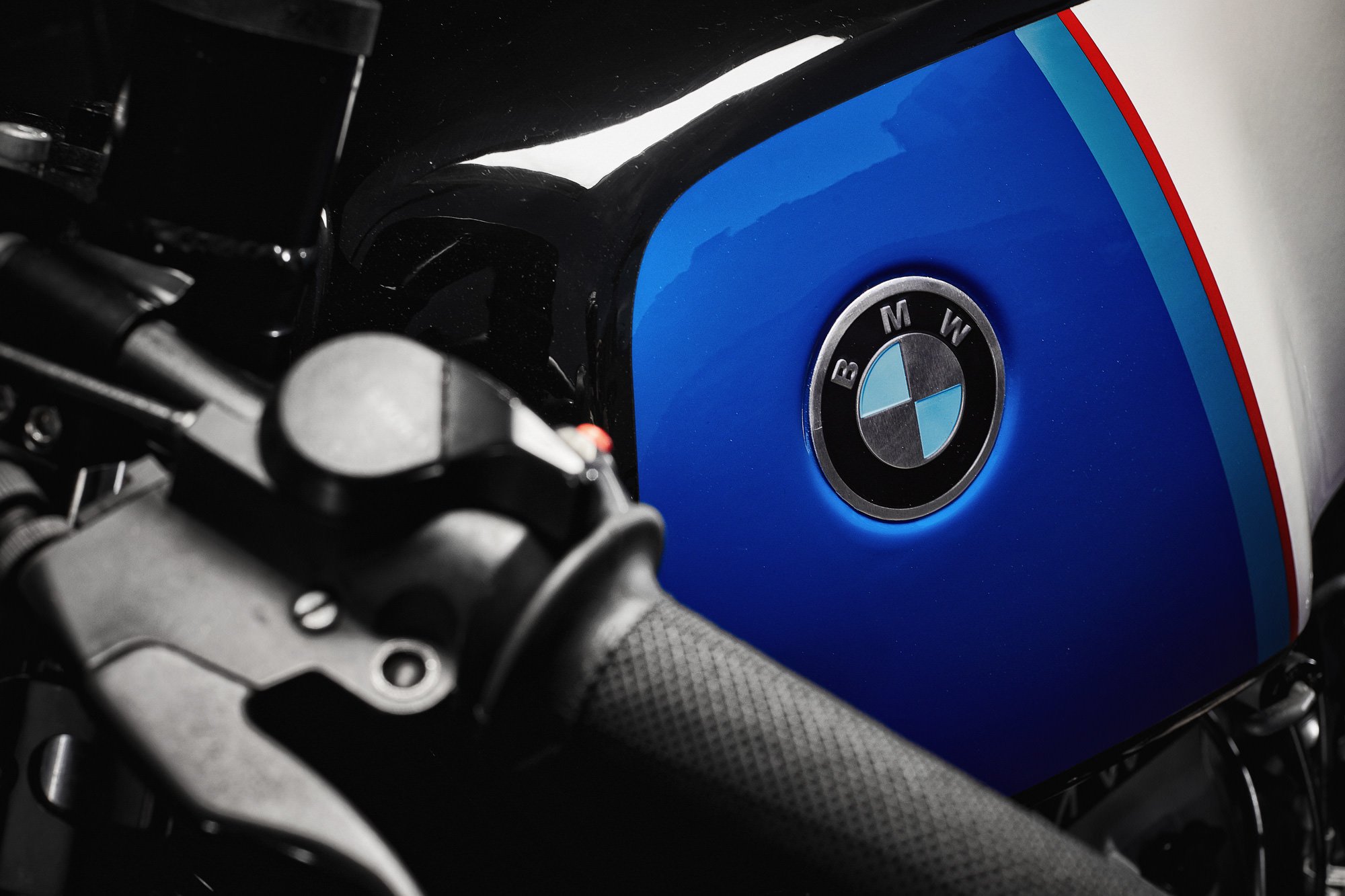 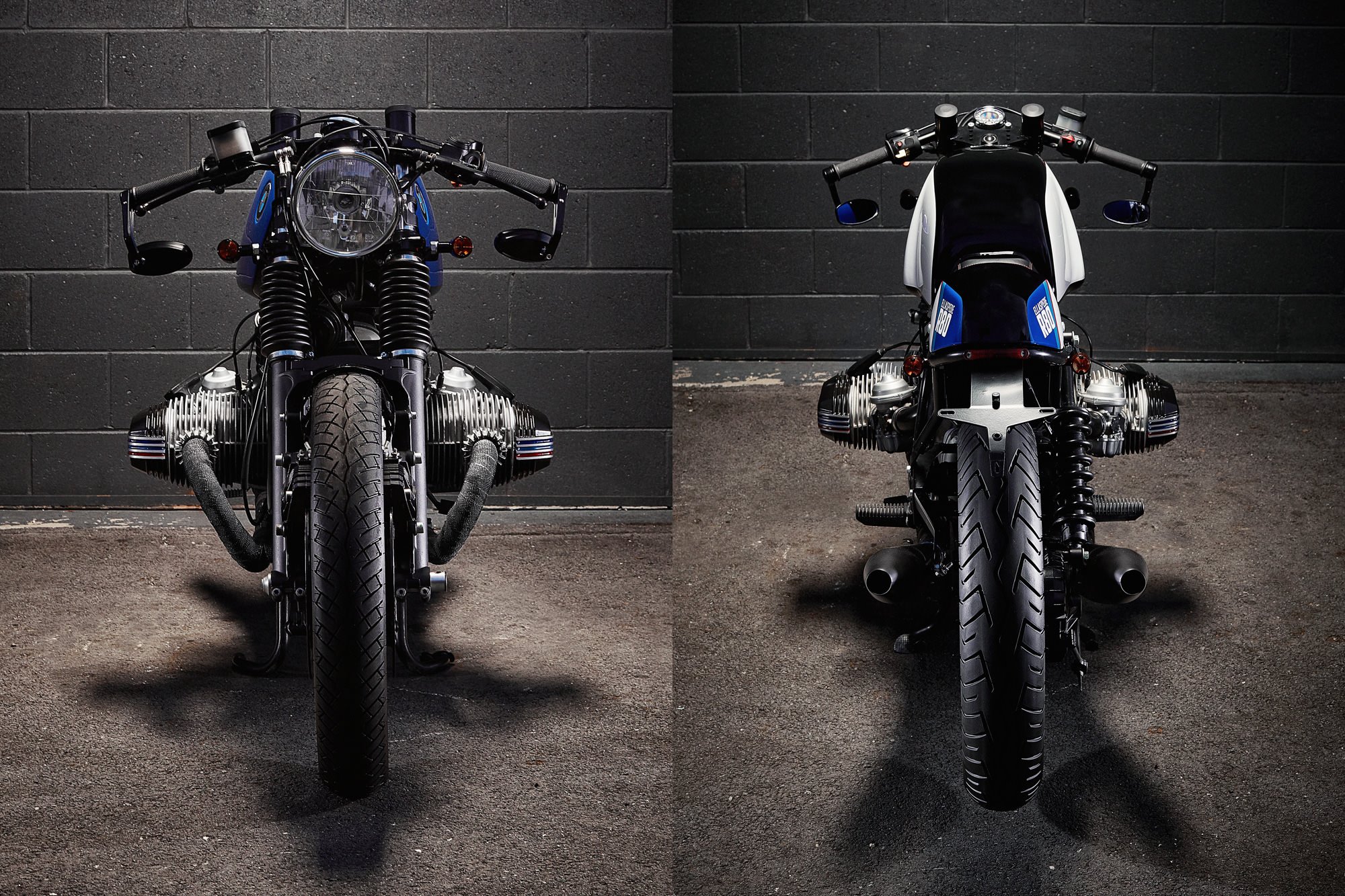 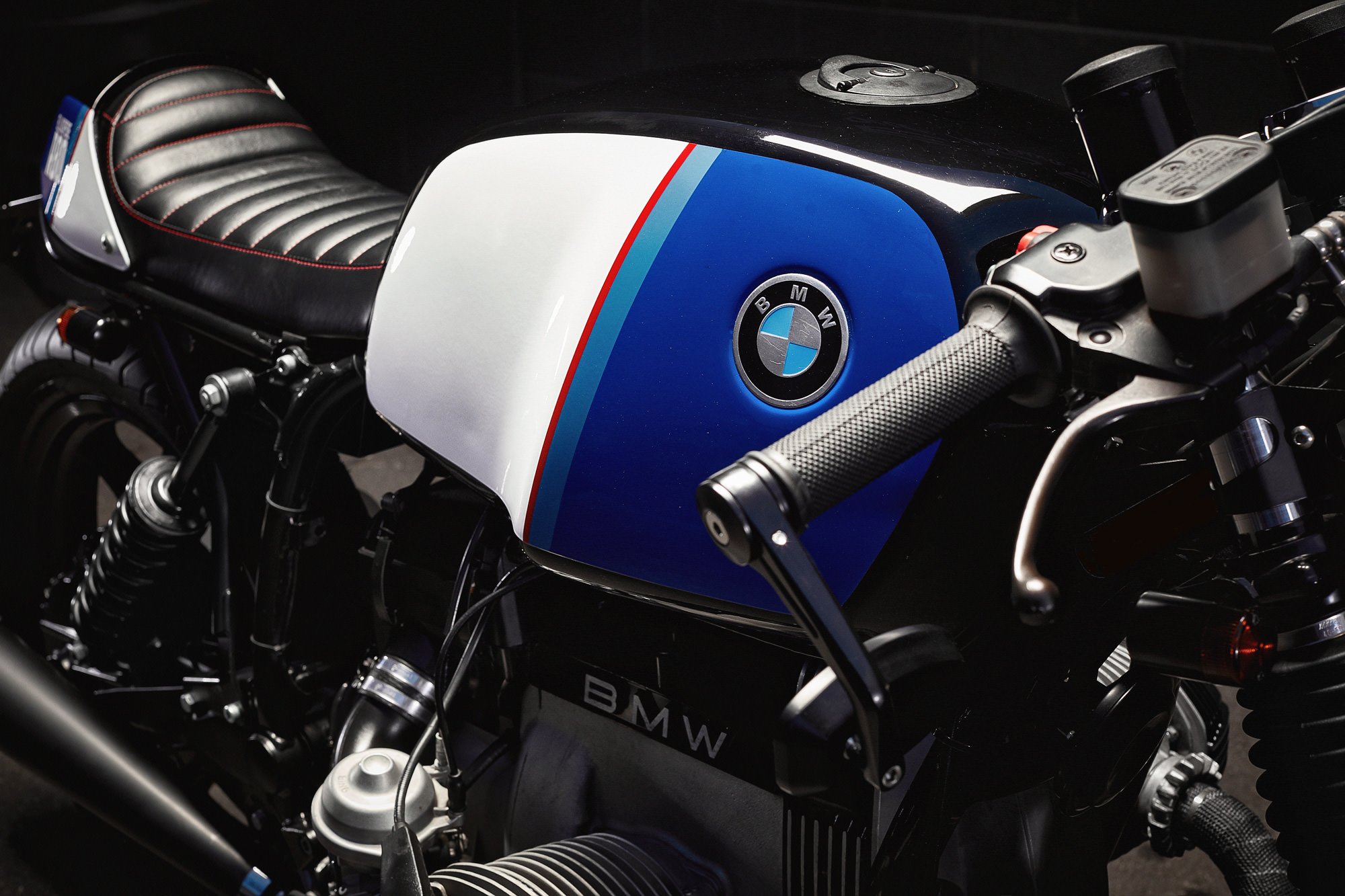 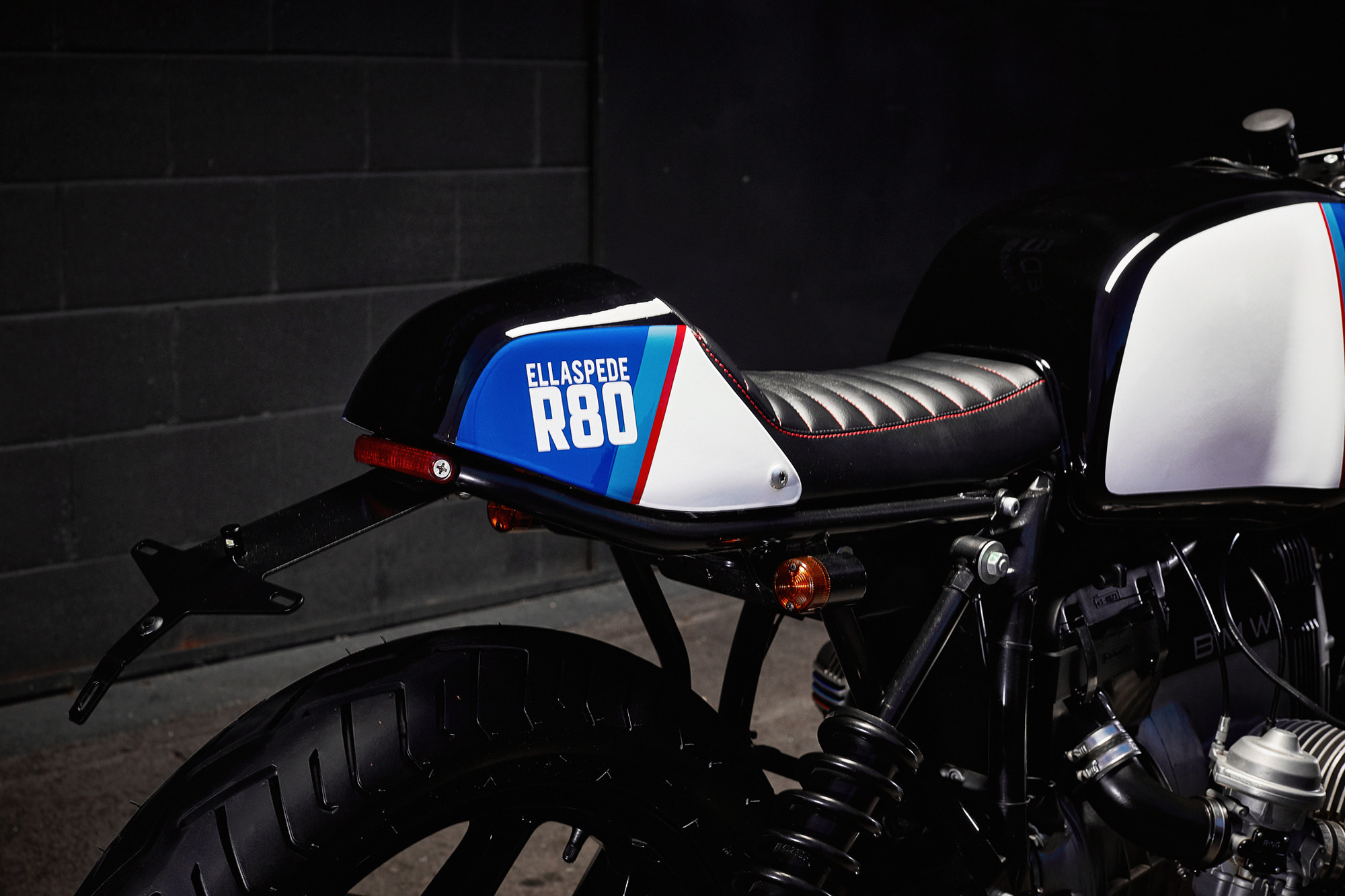 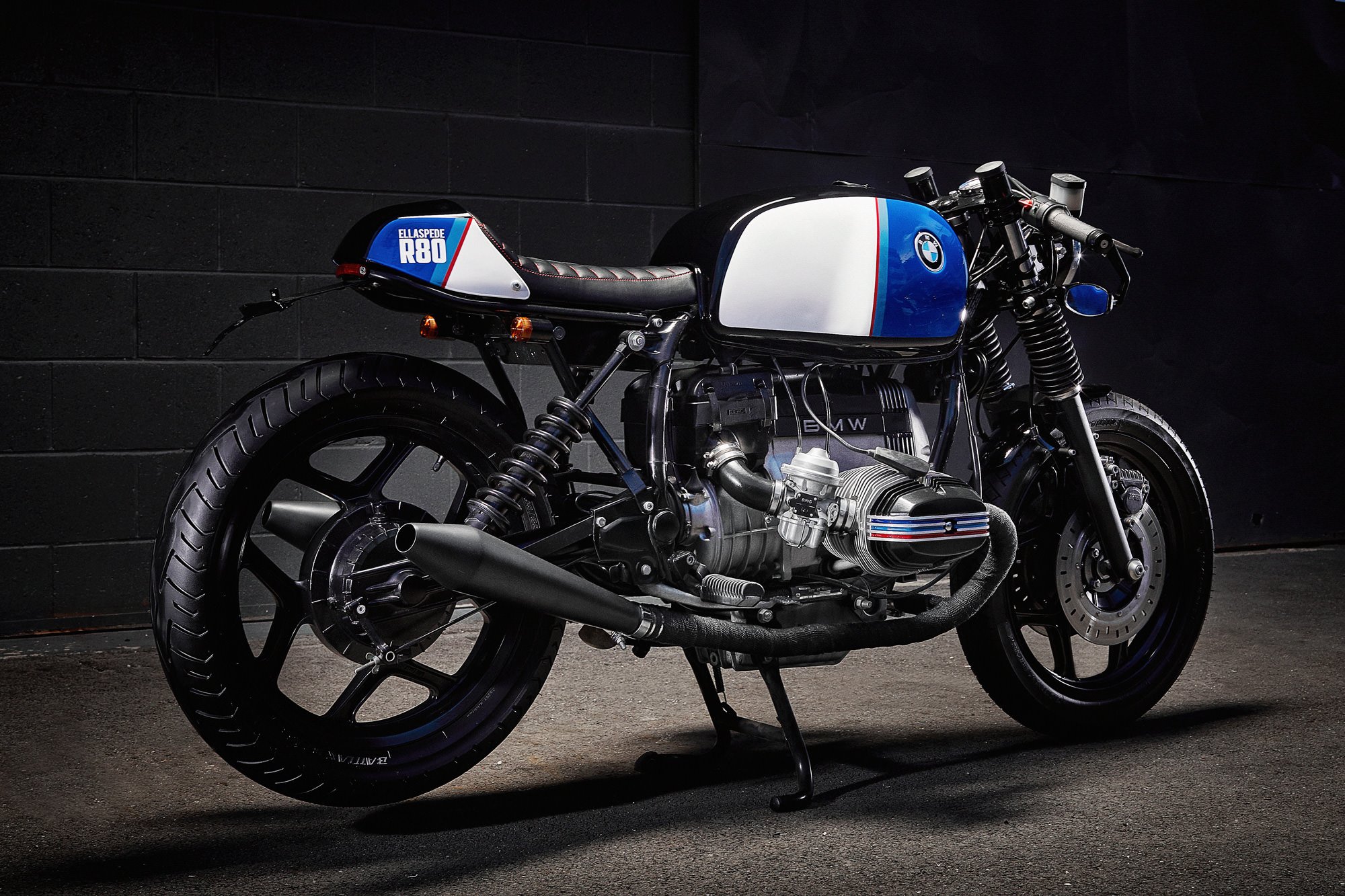 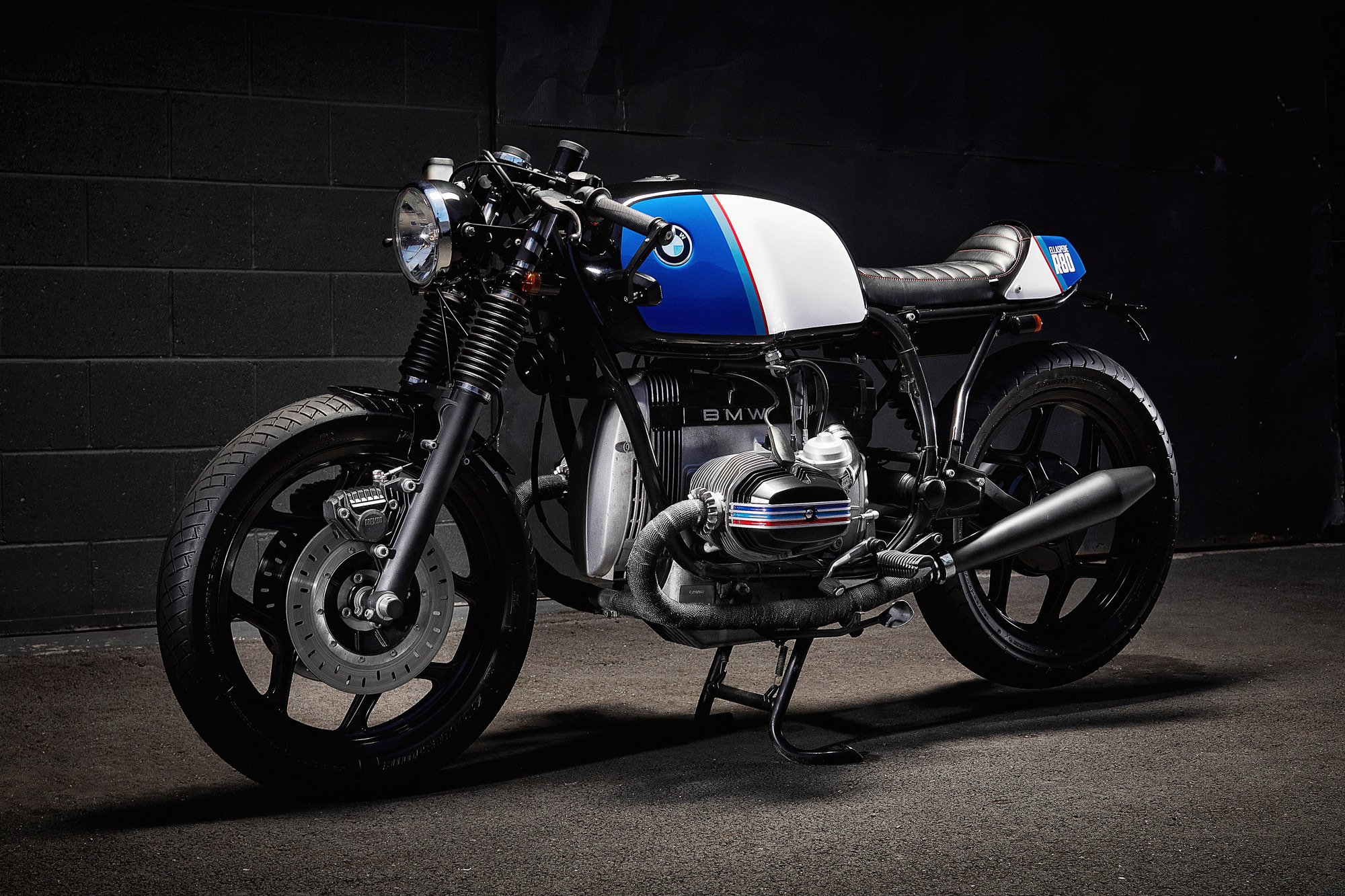 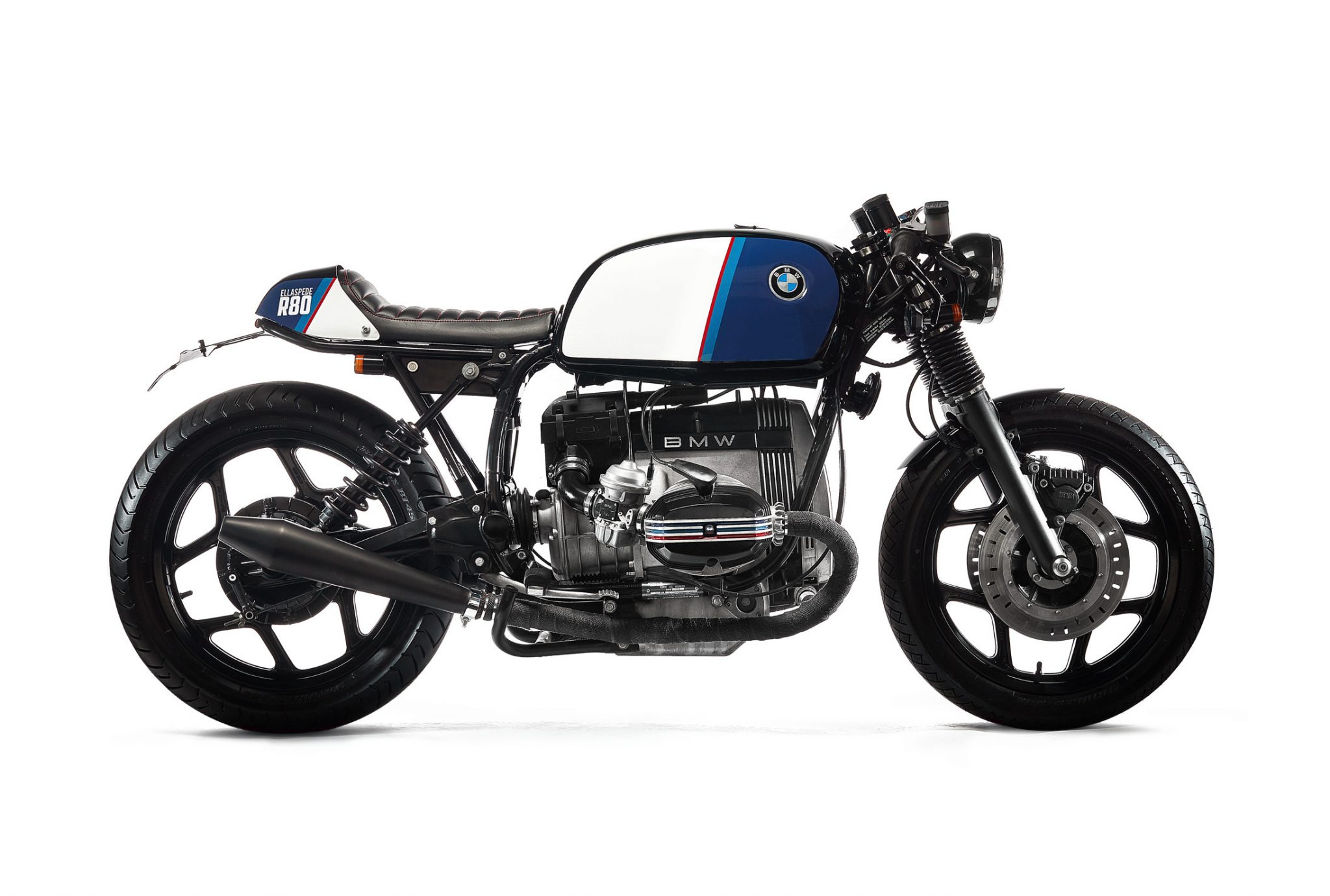 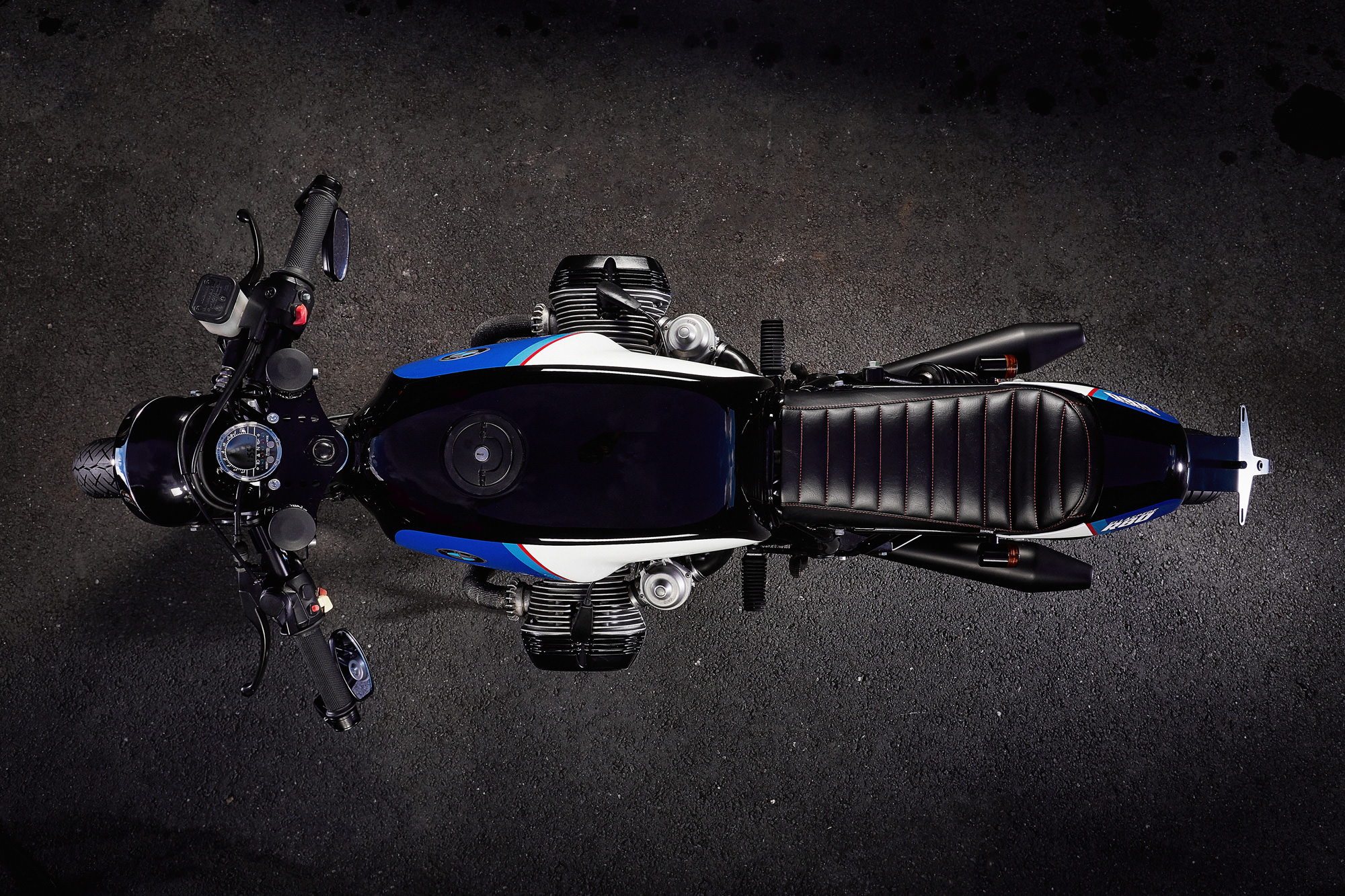