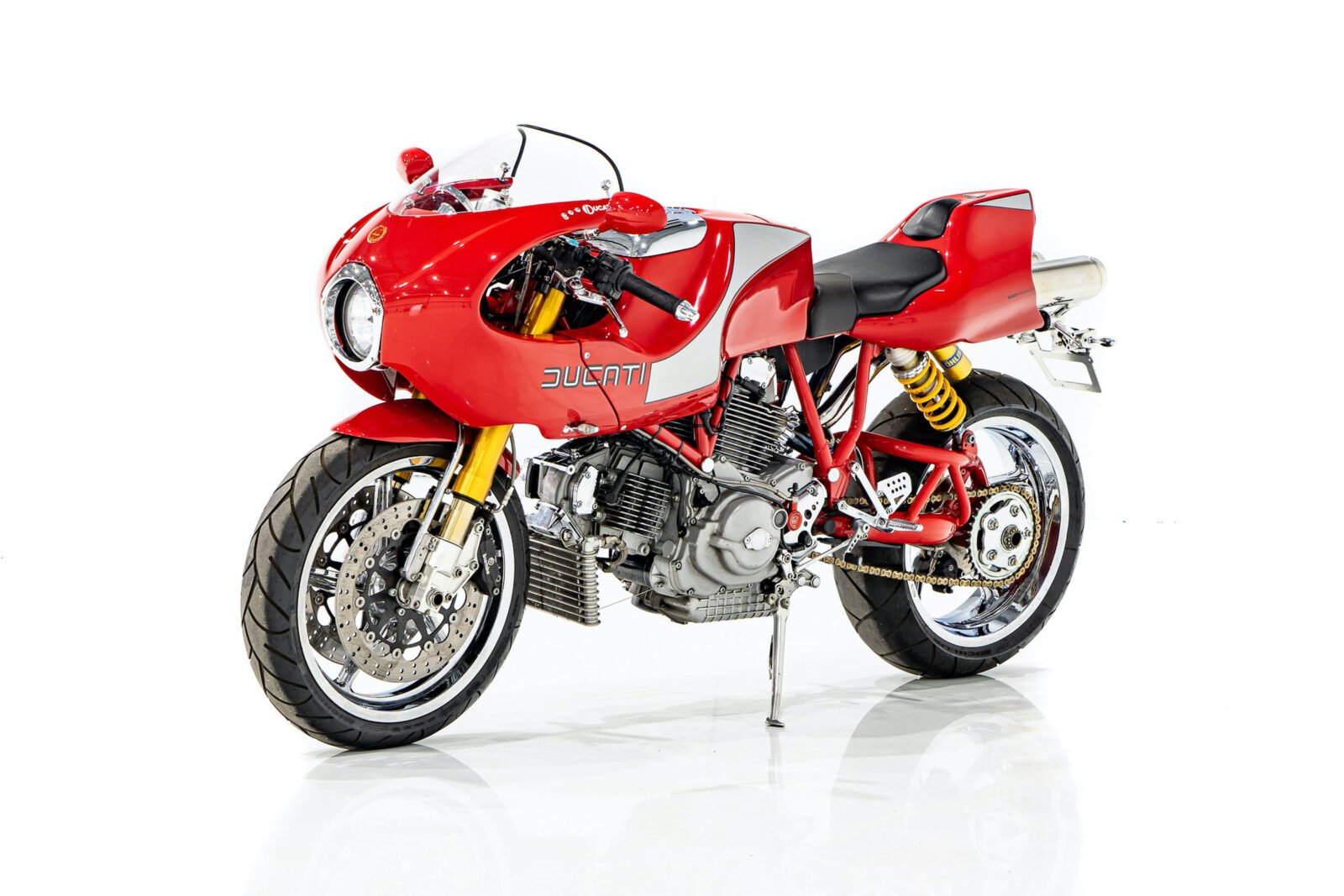 Though it looks like it could have rolled out of a Ducati Skunkworks garage back in the 1970s this model was actually developed in the late 1990s by a design team led by industry legend Pierre Terblanche.

Terblanche had taken his inspiration for the design from the now legendary Ducati ridden by Mike Hailwood to a shock win in the 1978 Isle of Man TT – an astonishing comeback for the former world champion rider who had retired 11 years earlier.

The project to build the MH900e started with little more than a sketch that was shown to the public at the Intermot Show in Munich in 1998. The reception was overwhelmingly positive, so much so that Ducati posted a questionnaire on their website about it to gauge the interest in the bike.

The reaction to this online poll was so strong that Ducati executives decided to put the bike into limited production starting in the year 2000, with just 2,000 examples of the Ducati MH900e Evoluzione. Rather than selling the bike through regular dealers the only way to buy one would be online through the Ducati website – another highly unusual move for the era. 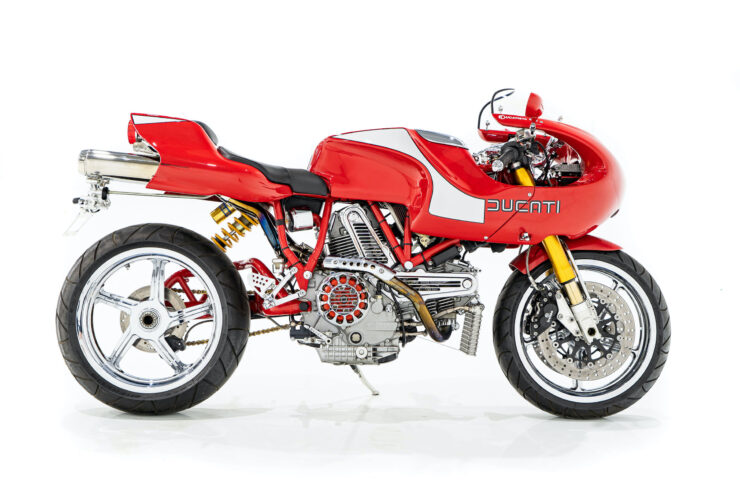 Above Image: The lines of the MH900e have won it fans around the world, when it was first released 39% of the first batch were sold to owners on the other side of the world in Japan.

Pre-orders went live on January 1st in the year 2000 at 00:01 am GMT with a price of 15,000 or approximately $18,000 USD. This was a decision that their own IT department likely advised them against as the world was waiting at that exact moment, the stroke after midnight, to see if the entire world’s computer systems were going to crash due to the Y2K Bug.

Luckily for us and for Ducati fans then, there were no such problems on the Ducati website, and the new Ducati MH900e Evoluzione sold out in exactly 31 minutes. Almost 40% of the bikes were bought by people in Japan, with the United States and Europe making up the remaining 60% (~30% each).

Though the plan had been to have these bikes built by fellow Italians at Bimota this had to be shelved when Bimota went bankrupt. The production of the MH900e was brought in-house at Ducati with between four and five a day being built by hand.

As you would expect the bike has a steel trellis frame that uses the engine as a stressed member, a Ducati signature, it also has a retro half fairing, a single seat with a rear cowl, and knee indents in the fuel tank to allow the rider to tuck in for optimal aerodynamics at speed.

When it came to the suspension and brakes for the new model Ducati used far more modern components, the forks are 43 mm upside down units and there’s a fully adjustable monoshock in the rear. The MH900e rides on alloy wheels and it has twin semi-floating Brembo brakes up front with 4-piston calipers, and a 220 mm single rear disc with 2-piston caliper. 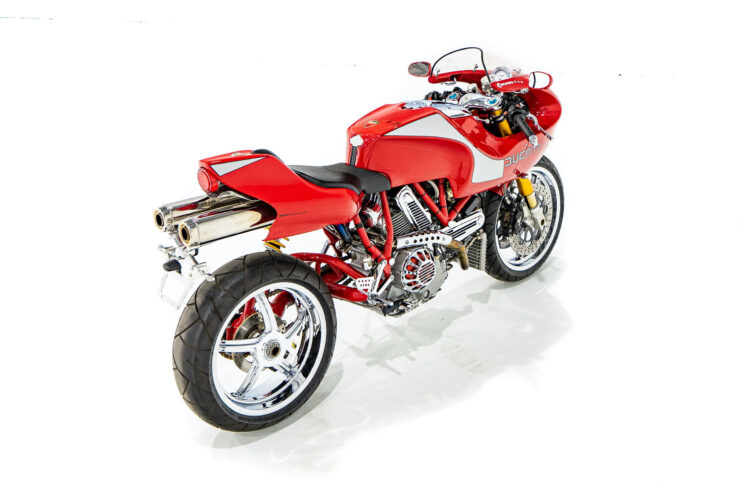 Above Image: The half fairing and knee indents in the fuel tank allow the rider to get tucked in and reduce the overall aerodynamic drag – just as Hailwood did on his Ducati back in 1978 on the Isle of Man.

The engine uses unit construction and it has a 6-speed transmission with a chain final drive. The model weighs in at 186 kgs (410 lbs) dry and though it handled very well many of them have remained in private collections or been used as display pieces.

As you may have guessed the name of the model “MH900e” stands for “Mike Hailwood 900cc Evoluzione.” Exactly 2,000 were built between 2001 and 2002, and this would be the bike that would inspire the Ducati Sport Classic series that would come later.

We don’t see a huge number of these come up for sale as most of them are tucked away in private collections, when they do come onto the market there’s always plenty of attention. If you’d like to read more about it or register to bid you can click here to visit the listing. 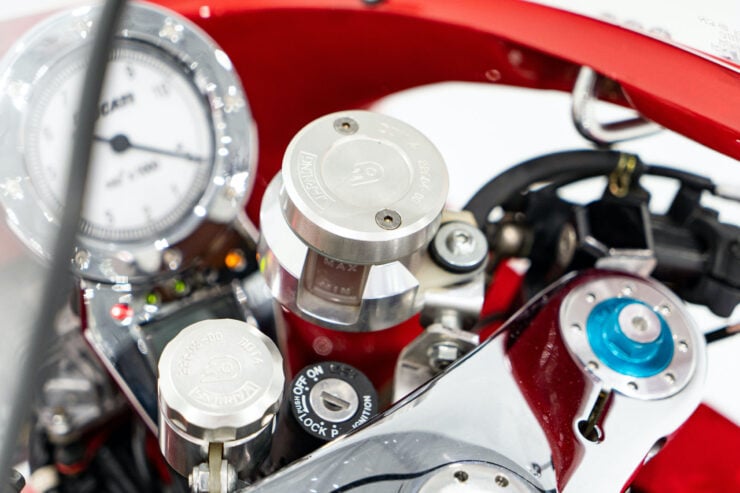 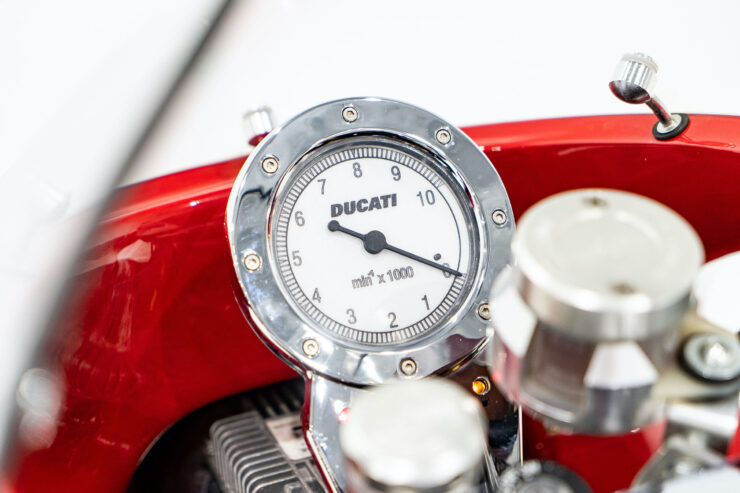 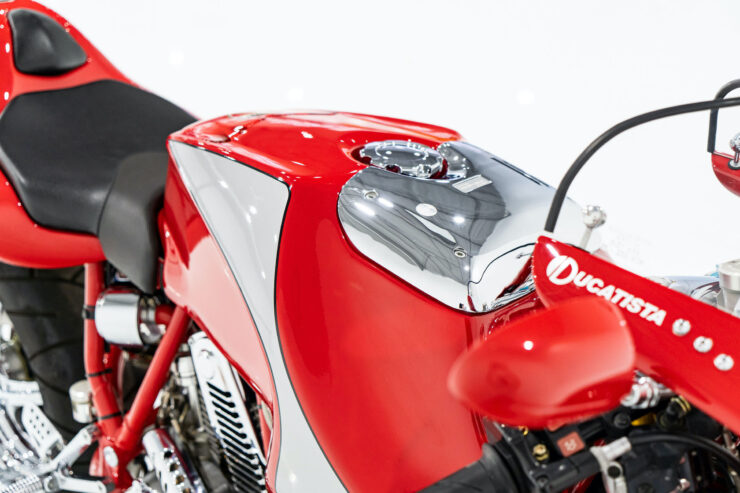 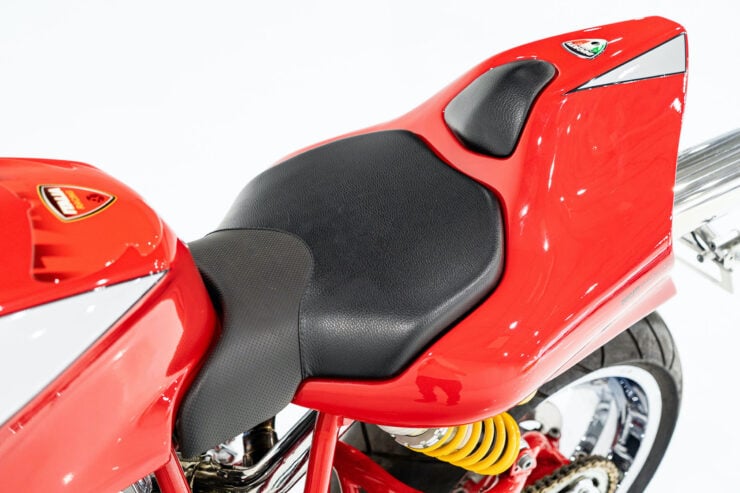 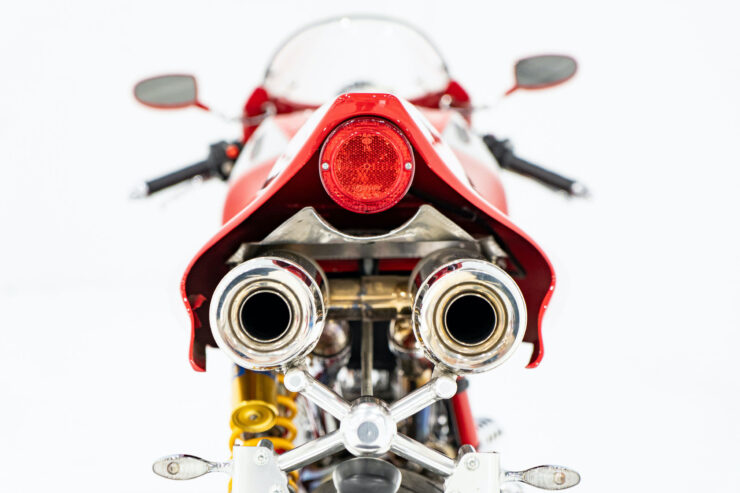 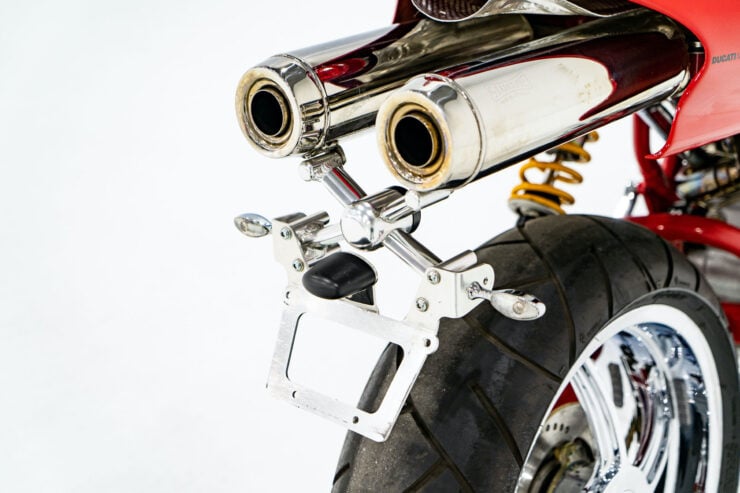 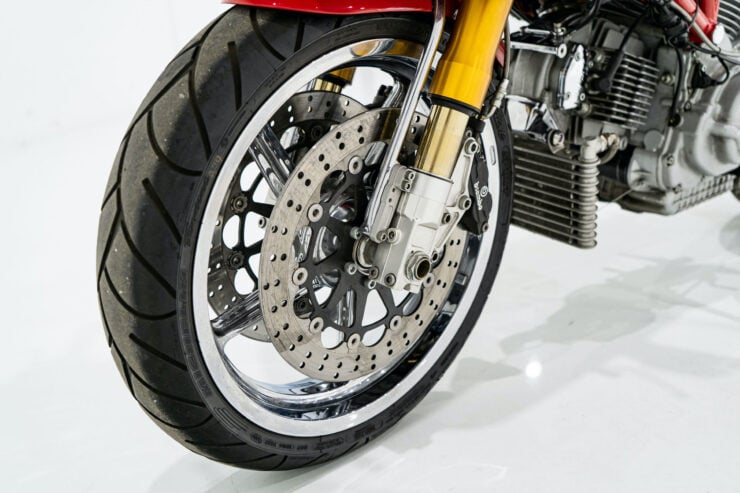 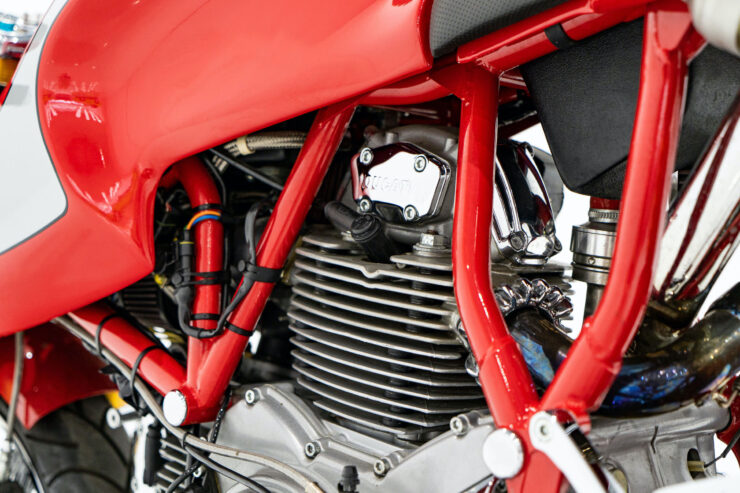 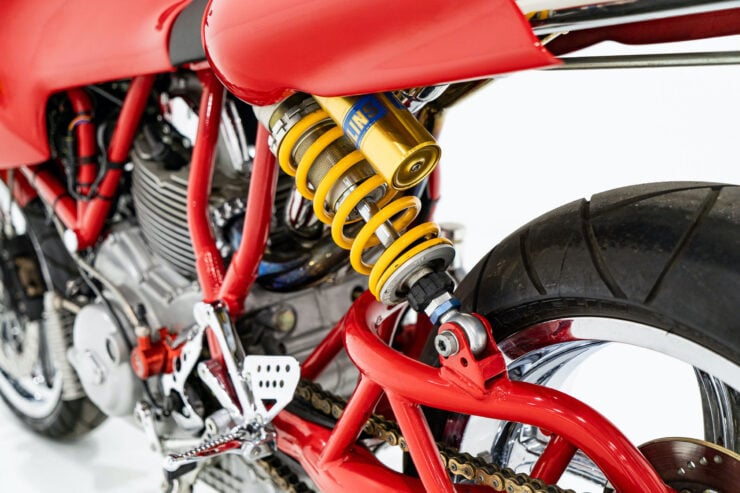 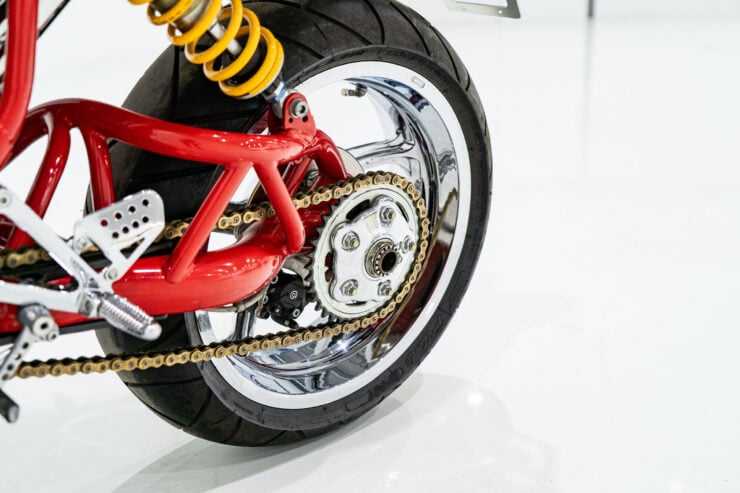 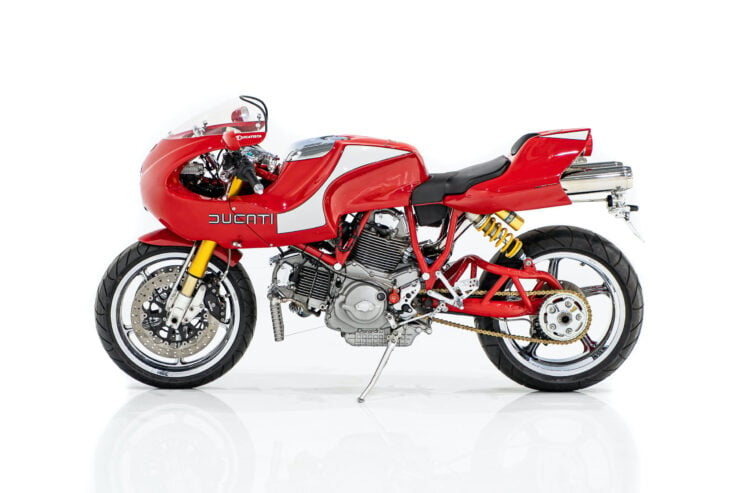 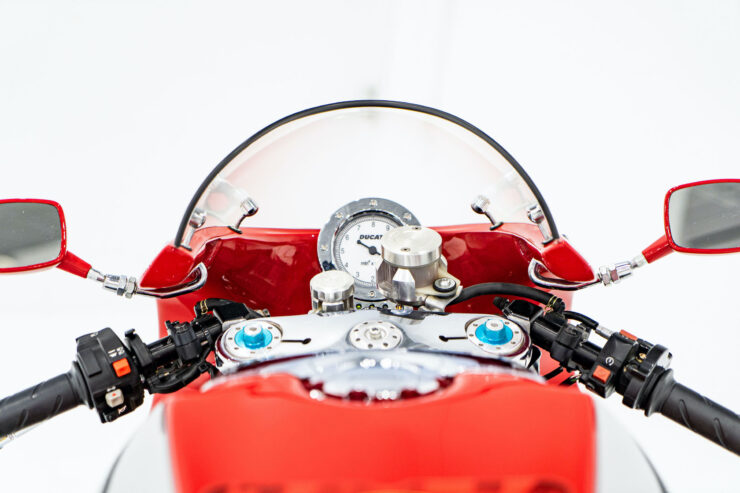 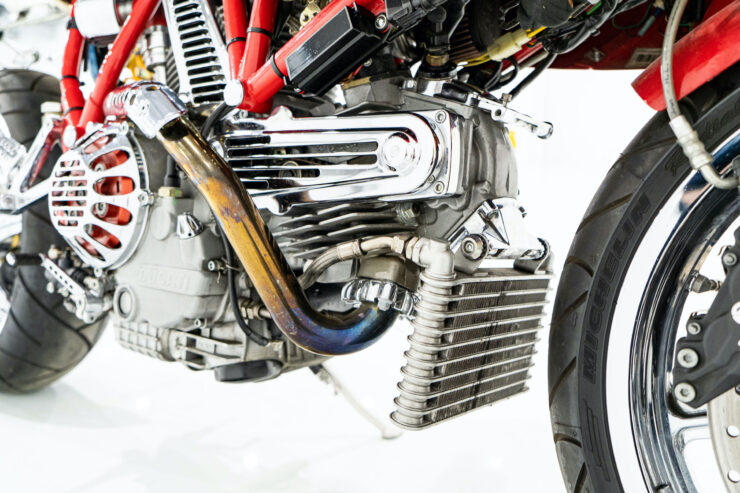