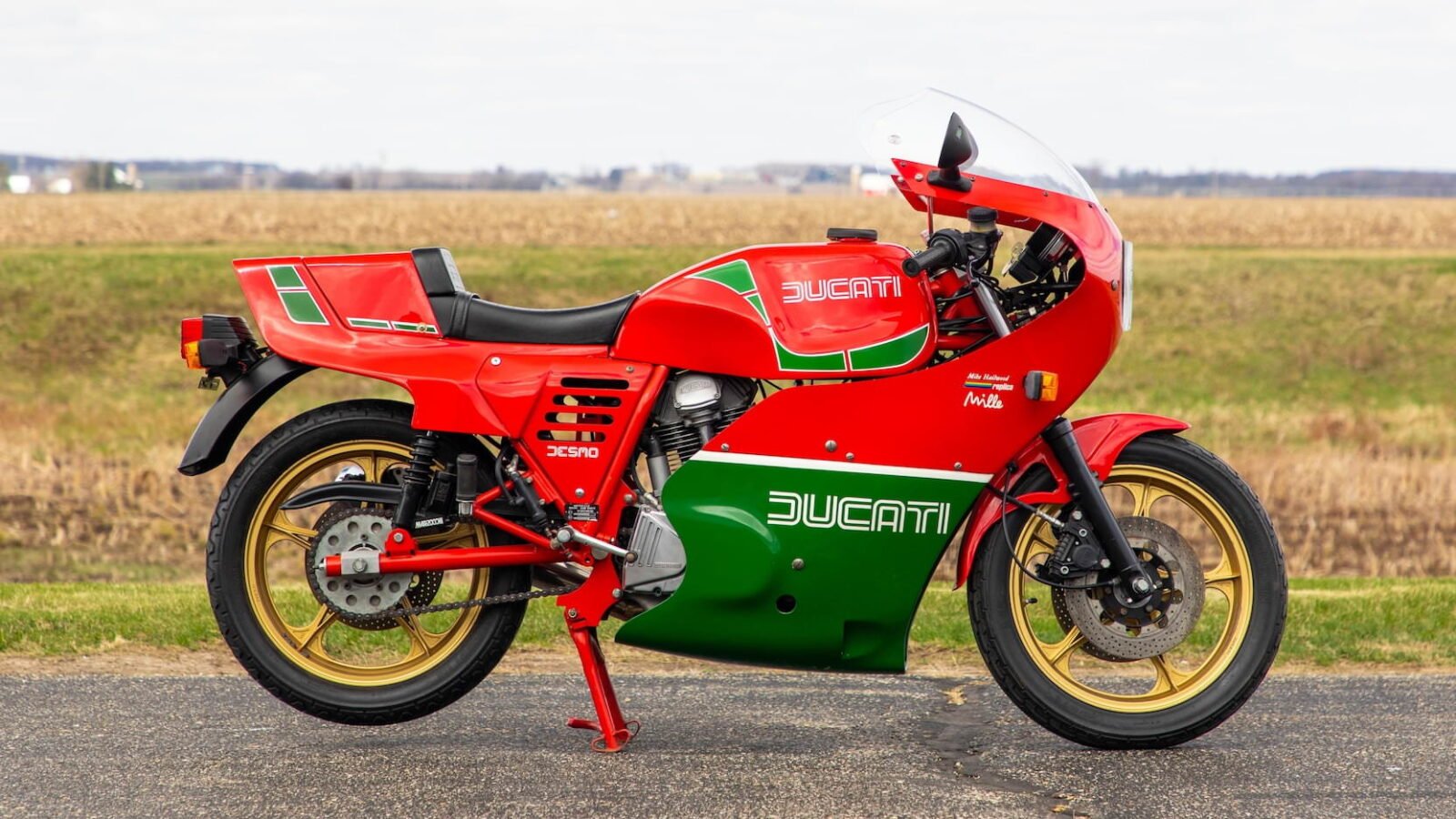 The Ducati Mike Hailwood Replica was built as an homage to the remarkable victory by Mike Hailwood at the 1978 Isle of Man TT in the Formula One division.

This would be a victory that shocked the world and lit up the motoring press, Hailwood had retired from a remarkably successful career as a motorcycle racer 11 years earlier, and by the time he staged his comeback at the Isle of Man TT he was 38.

When Hailwood announced that he would be returning to the island at almost 40 with a non-factory team, much of the motorcycle world dismissed his chances. He would be battling against talented younger riders who were piloting state-of-the-art Japanese machines and riding in factory-backed teams from Honda, Kawasaki, and Suzuki. 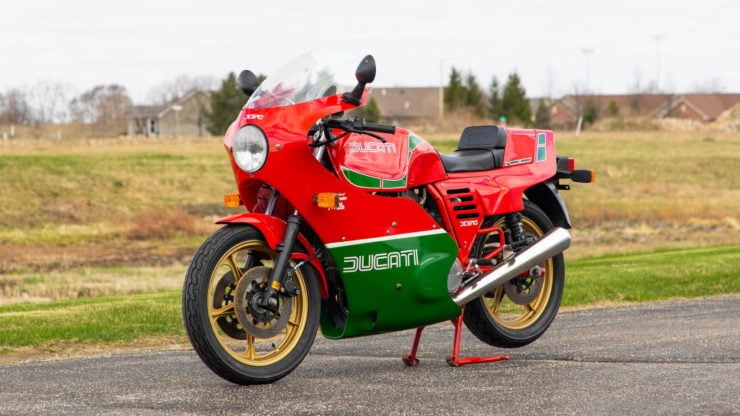 Back before his retirement Hailwood had been (arguably) the greatest motorcycle racer in the world. He started racing motorcycles competitively at the age of 11 in 1957, by the next year he was already a dominant force in multiple classes, winning the ACU Stars at 125cc, 250cc, and 350cc, and taking home the Pinhard Prize. Mike’s winning-ways continued, and in 1961 he became the first person in history to win three races at the Isle of Man TT in one week – taking victories in the 125cc, 250cc, and 500cc classes.

He later competed in 50 Formula 1 Grands Prix, won the 1972 Formula 2 European title, earned a podium finish at the 1969 24 Hours of Le Mans, and he raced extensively in the European Shellsport F5000 series. 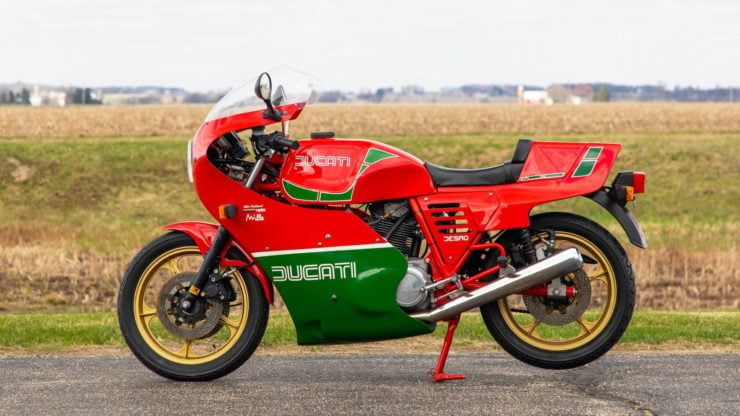 When it was learned that Hailwood would be staging a comeback aboard a Ducati at the ’78 Isle of Man TT no one doubted his prior ability, but many wondered if he still had what it took to race on the island, where average speeds are well over 100 mph around the circuit and a single mistake can mean an instant death.

As it played out, the naysayers should probably have stayed home. Not only did Hailwood win the TT Formula One division in 1978 with an average speed of over 110 mph, he returned in 1979 and took victory in the Senior TT just to prove it wasn’t a fluke.

Although Ducati provided very little support for the Manchester Ducati dealership team Sports Motorcycles, they wasted no time in capitalising on the extraordinary victory – a rare chance to claim a popular win over the better funded teams from Japan.

The Ducati Mike Hailwood Replica didn’t actually have much in common with the largely custom race bike that Hailwood actually rode, but it did look similar and it offered the styling, handling, and characteristic L-twin torque that Ducati riders love. 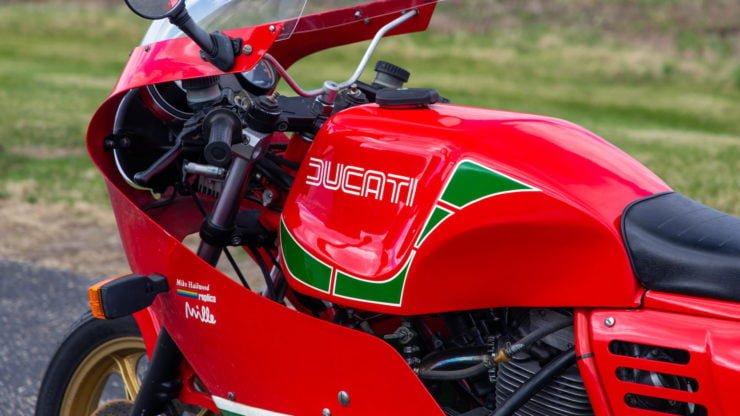 The Hailwood Replica was mostly the same as the regular Ducati 900SS though it did have larger Dell’Orto carburetors, no air filters (just a wire mesh), and higher performance Conti mufflers. The engine was the same as the 900SS – an air-cooled 90 degree L-twin with a capacity of 973cc, a 9.3:1 compression ratio, and it has a 5-speed gearbox.

The bike produced 76 hp at 6,700 rpm and had a curb weight of 195 kilograms (430 lbs), and it had a top speed in excess of 130 mph. Ducati sold over 7,000 examples of the Hailwood Replica throughout the 1979 to 1986 production run, with later models often being valued a little more highly as they had an electric starter, a hydrau­lic clutch, and in 1985 the engine capacity was increased to 973cc and the name changed to the MHR Mille (Mike Hailwood Replica “Mille” or “1,000” in Italian to denote the new engine size).

The low mileage, original Ducati Mike Hailwood Replica you see here is from 1985 and so it features all the upgrades and the larger, more reliable engine. It has just 11,713 miles on the odometer and it’s due to be offered by Mecum in mid-July, there’s currently no price estimate, if you’d like to read more or register to bid you can click here to visit the listing. 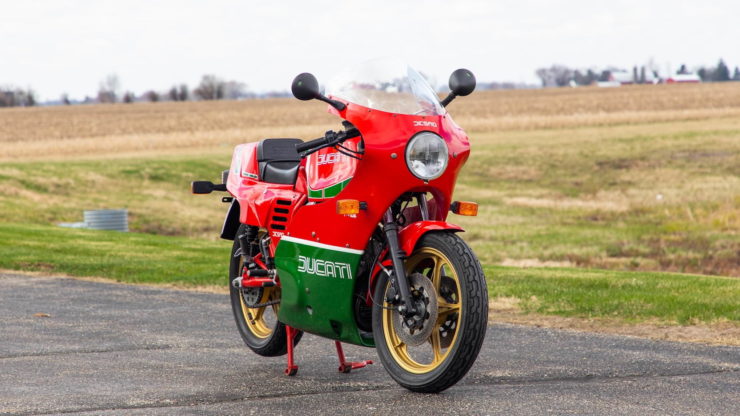 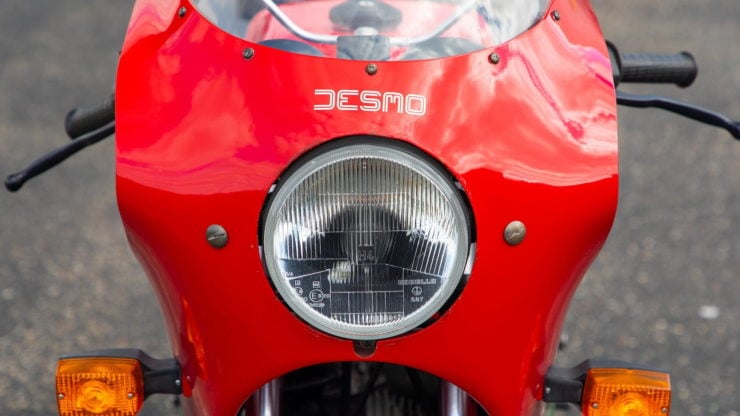 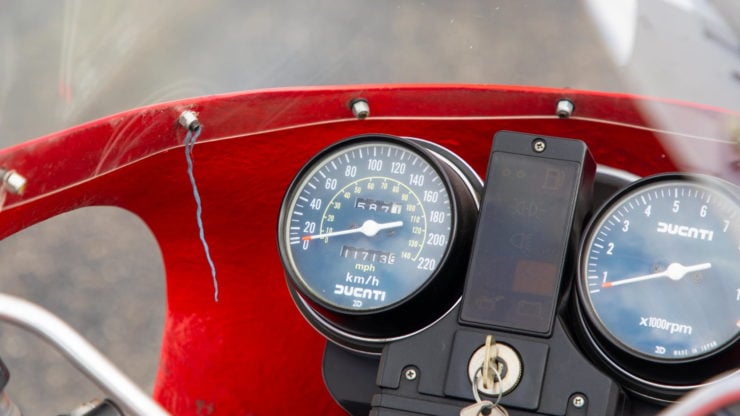 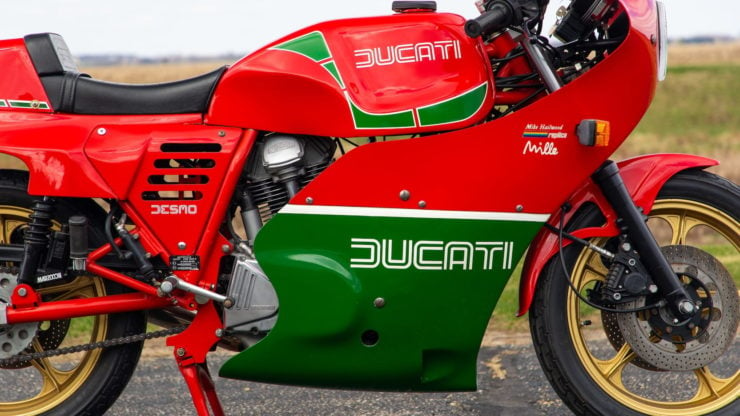 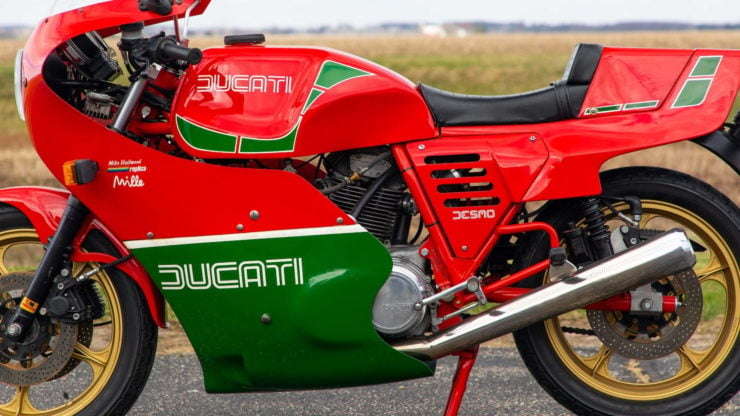 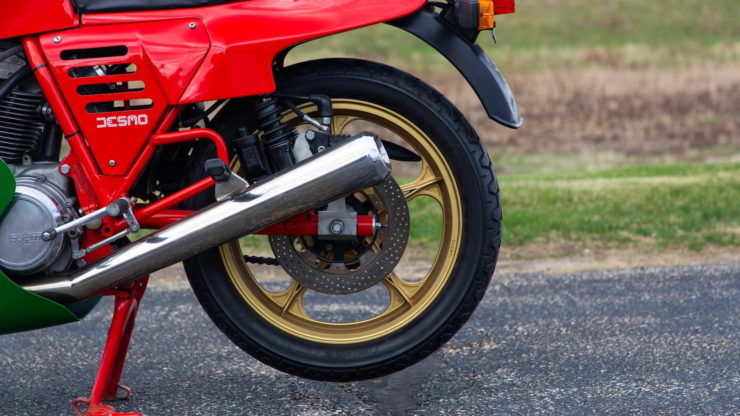 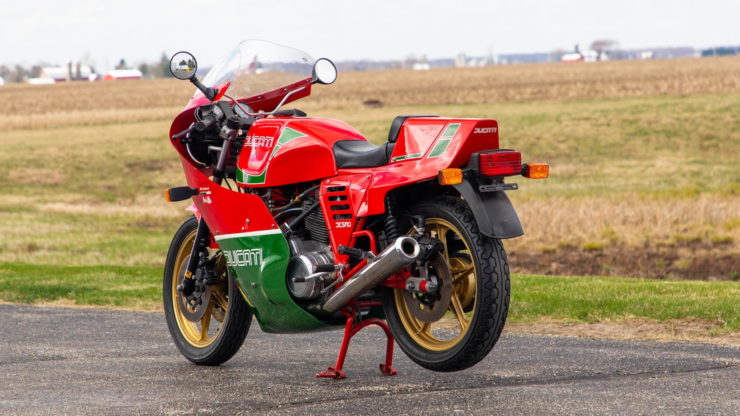 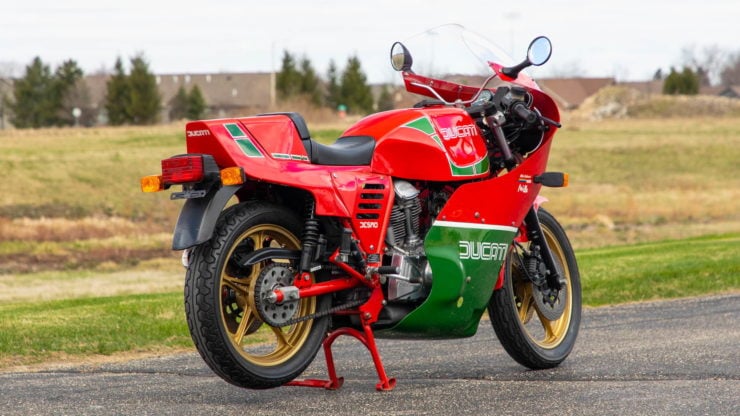 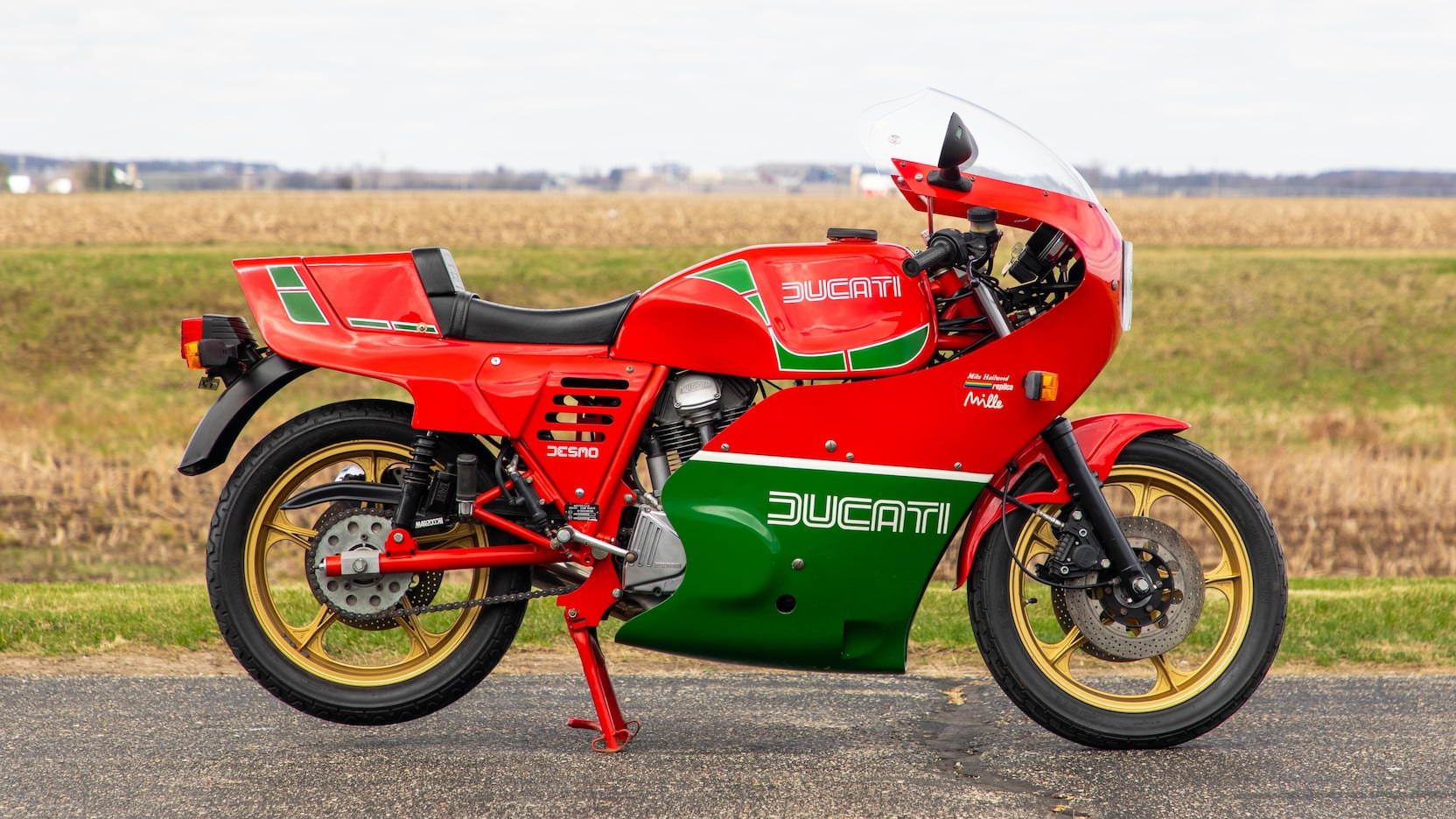