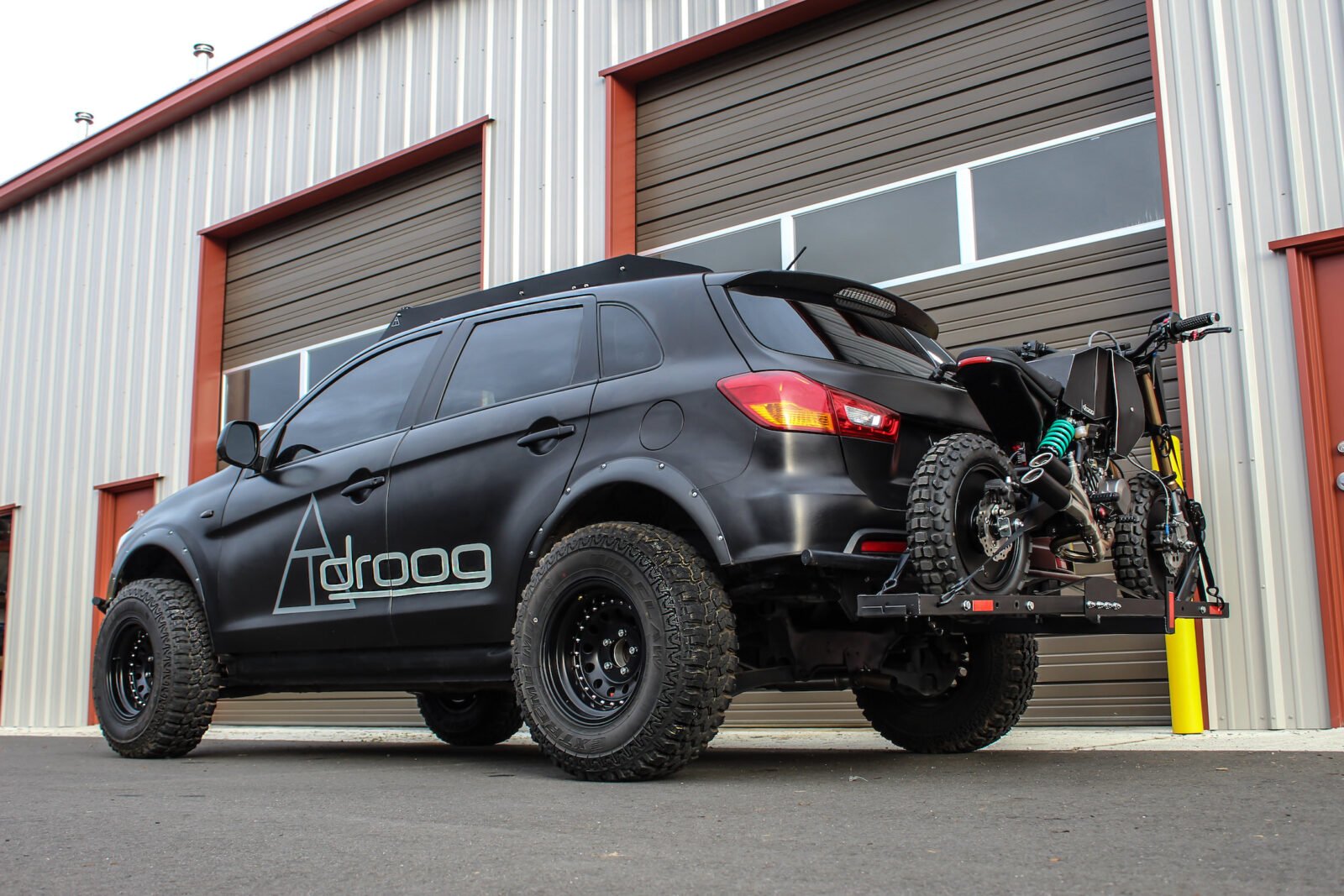 The Droog Moto Mini Fighter is a new release from one of the custom motorcycle world’s most unusual garages.

The concept for the new design was simple – they wanted to create a street-legal minibike that could be easily tossed on the back of your Land Rover Defender for a weekend away in the wilderness, something ideal for exploring forest trails without the weight of a full-sized scrambler or enduro.

Each Mini Fighter starts life as a Kawasaki Z125 Pro, a popular Japanese minibike that was developed to compete with the new Honda Monkey.

Despite the fact that the Z125 Pro is roughly half the size of a standard motorcycle it packs all the required features to ensure it’s road-legal – and many city-based owners use them as daily transportation.

The team at Droog Moto took the elements they liked from the Z125 Pro and added their own touch, creating what they describe as a Scrambler x Street Fighter – they dubbed it the DM-018 Mini Fighter.

In order to create a Mini Fighter the Z125 Pro is partially disassembled and a new fuel tank, rear subframe, and seat are added as well as all new lighting. The suspension is modified to better suit its new purpose and buyers can choose between chunky off-road rubber or more road-oriented tires.

The engine is tuned to match the new exhaust, and the new rear subframe changes the riding position for better ergonomics. With an engine size of 125cc and a fuel tank size of just under 2 gallons (7.5 litres) the offers ample range for its intended purpose. 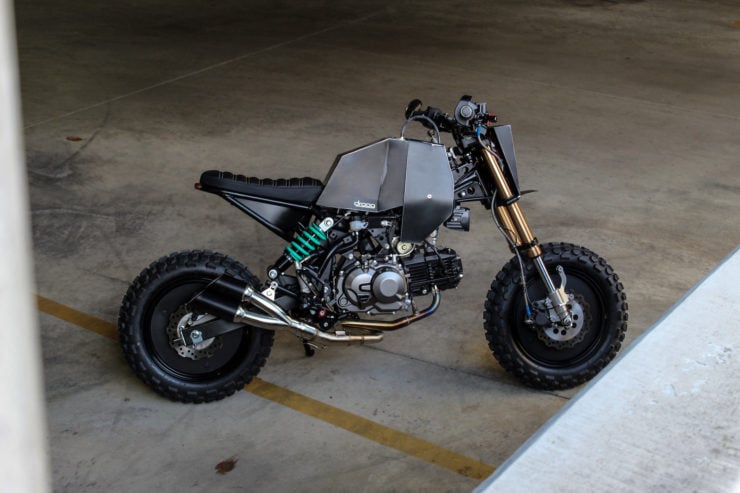 The Kawasaki Z125 Pro is powered by an air-cooled, single-cylinder engine with a single overhead cam, two valves per cylinder, and electronic fuel injection. Power is sent back through a 4-speed gearbox to an enclosed chain to the rear wheel, and the bike uses cast alloy wheels front and back.

Suspension is perhaps a little more advanced than you may expect from a mini bike, with upside down forks up front and an adjustable, off-set monoshock on the rear. Braking is accomplished with a single disc front and back, an upright seating position, and wide handlebars offering excellent maneuverability.

With a curb weight of 224.8 lbs (101.9 kgs) the Z125 Pro is half the weight of a typical full size motorcycle, this makes it ideal for trailer or tow hitch carrying, and it contributes to it being much easier to load and unload. 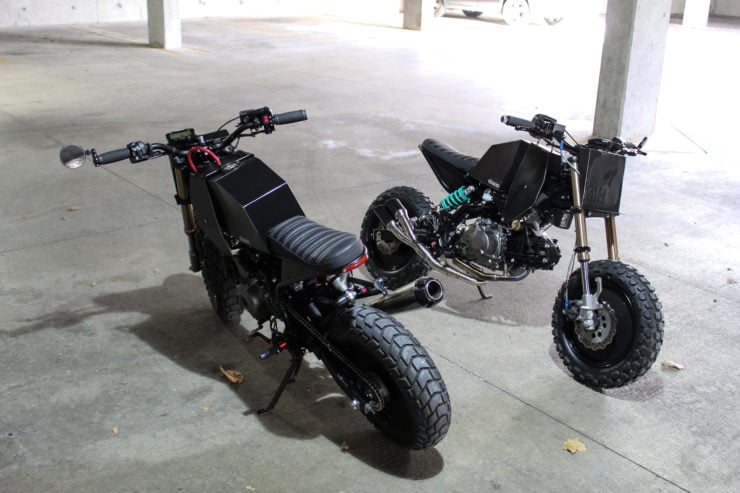 The Mini Fighter is the work of Droog Moto, a custom garage run by the somewhat mysterious team of M & E, they’ve been in the custom motorcycle trade for a number of years and they’ve forged their own signature style that you can spot from a city block away.

The current Droog Moto model line up include a series of futuristic scramblers including the full-size Urban Fighters, the electric E-Fighters, and the Mini Fighters you see shown here. All are available to order as limited production motorcycles. 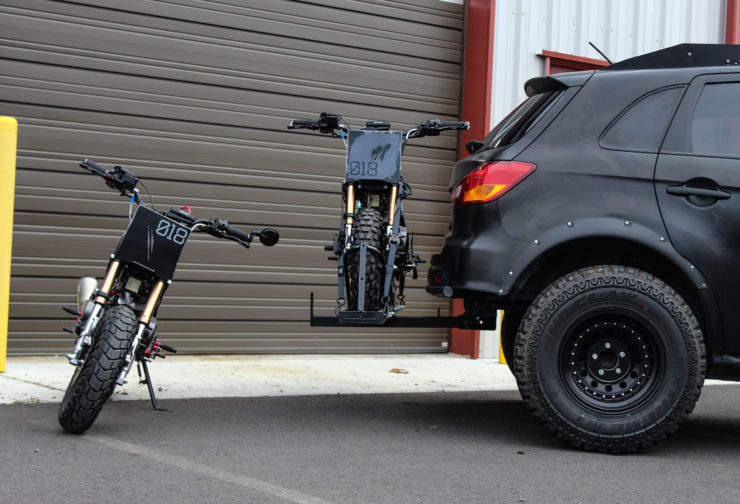 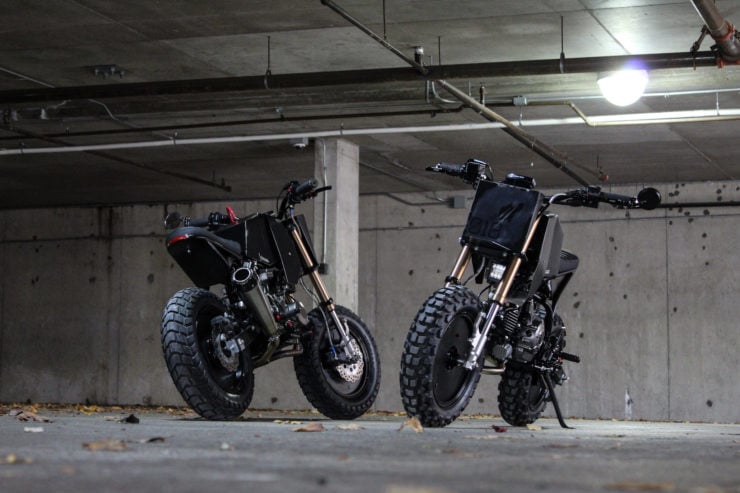 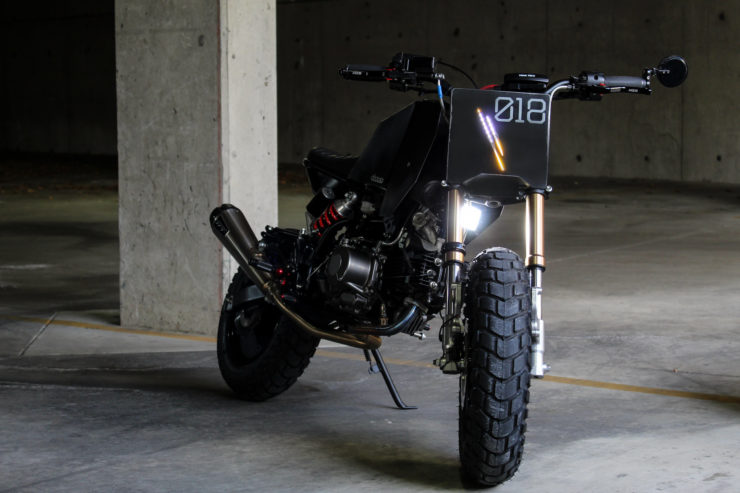 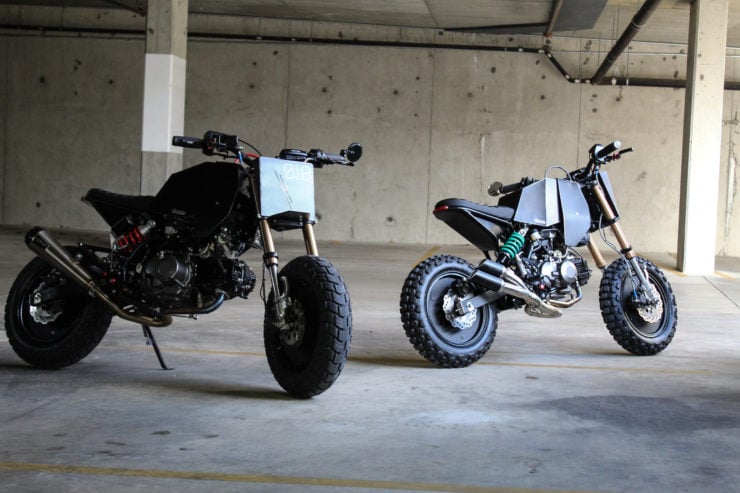 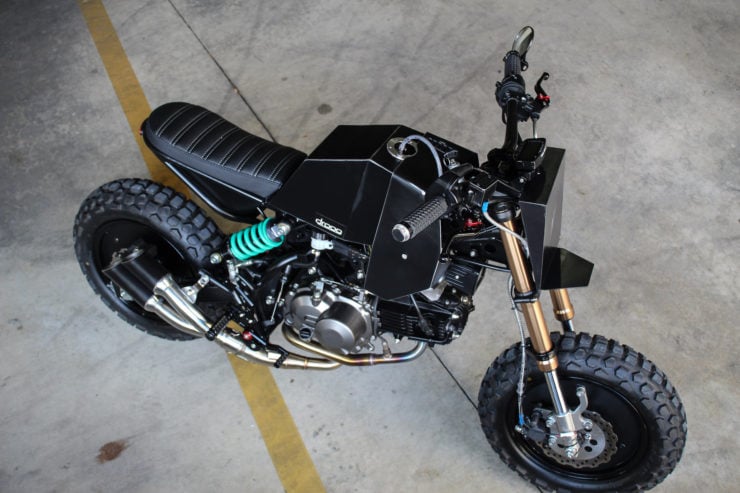 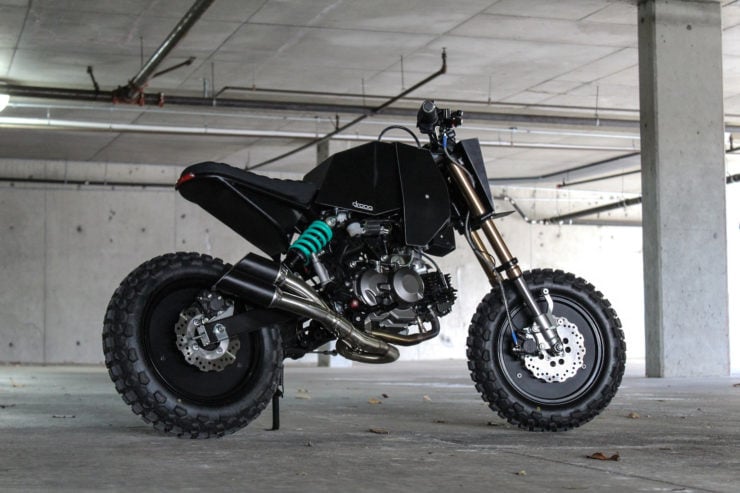 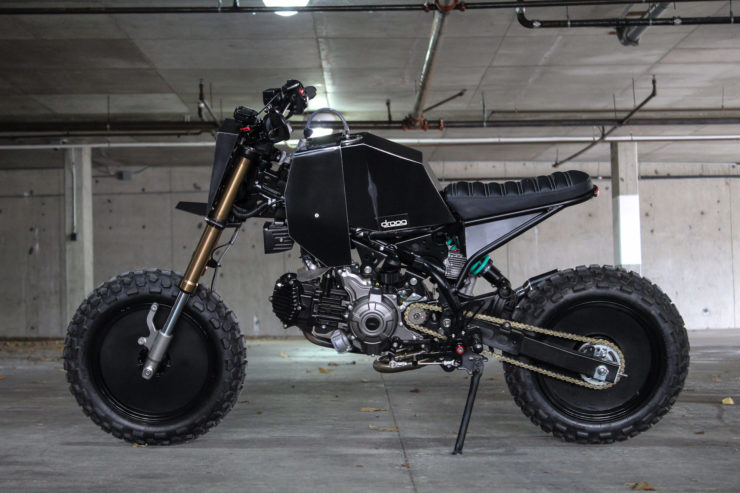 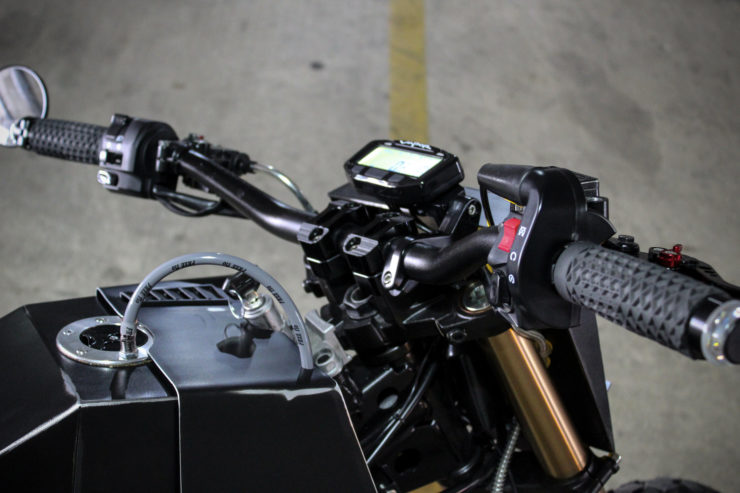 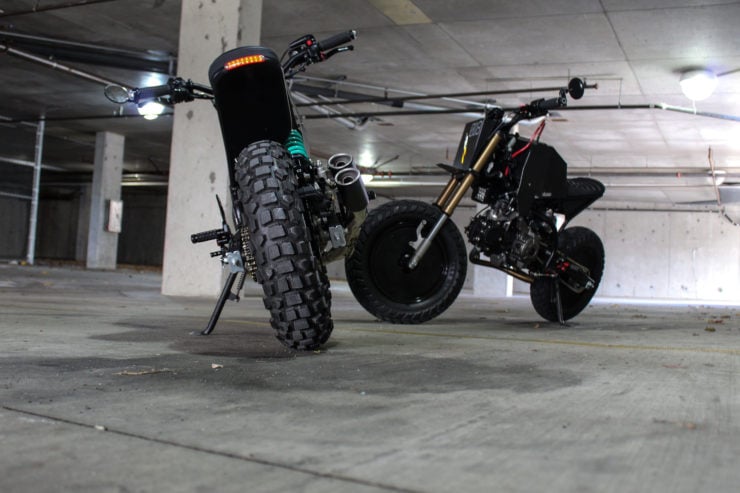 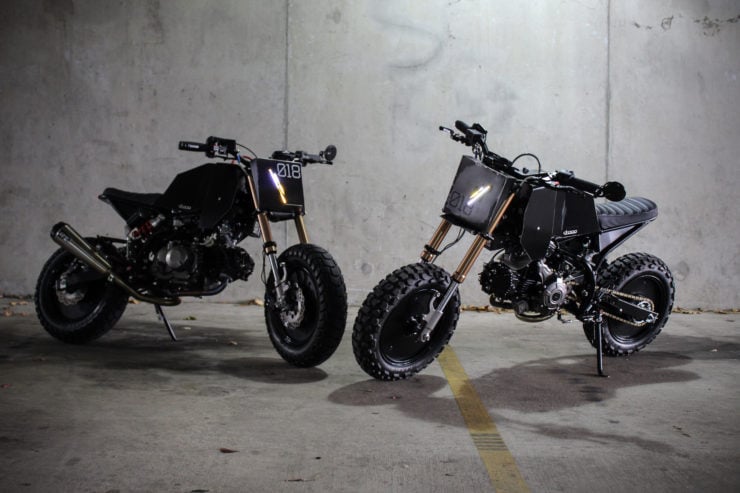 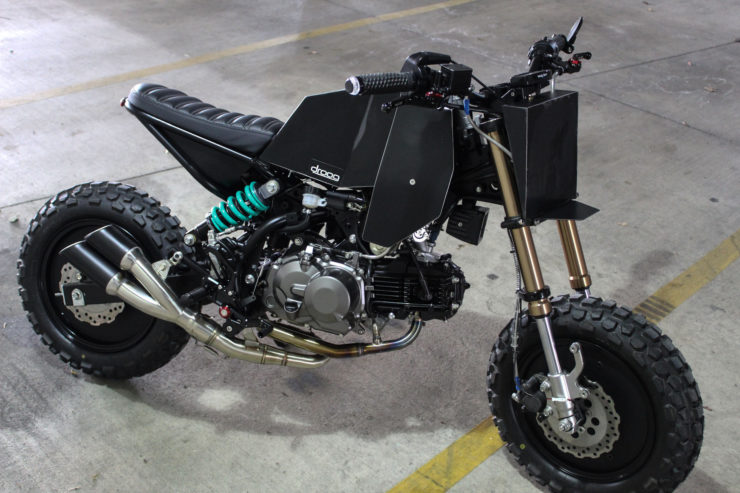 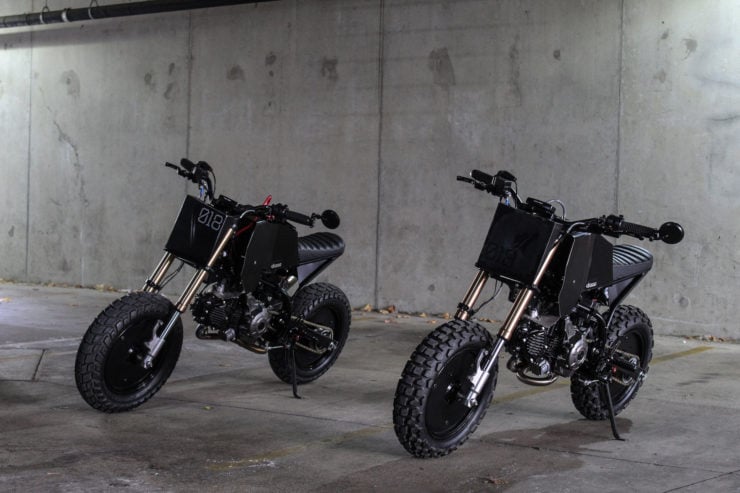 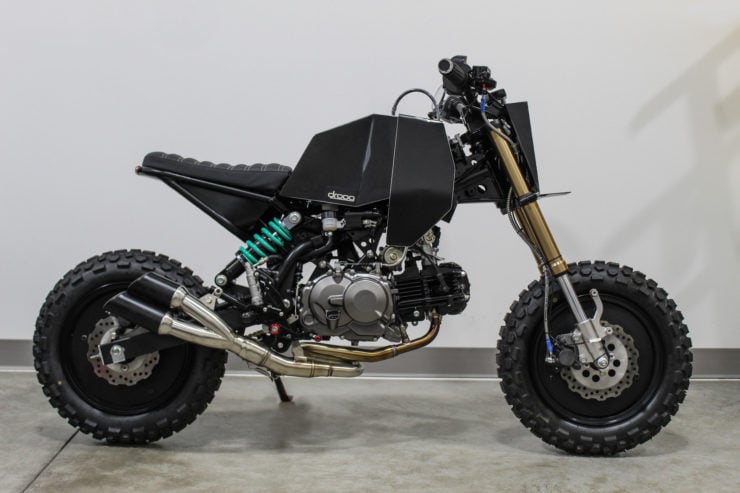 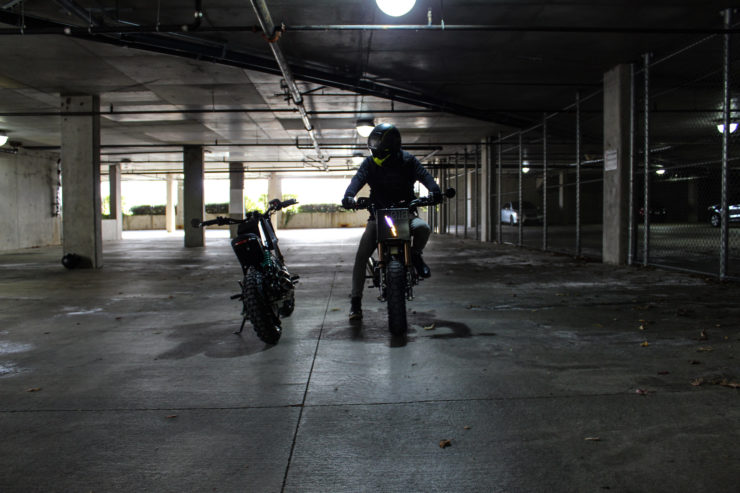