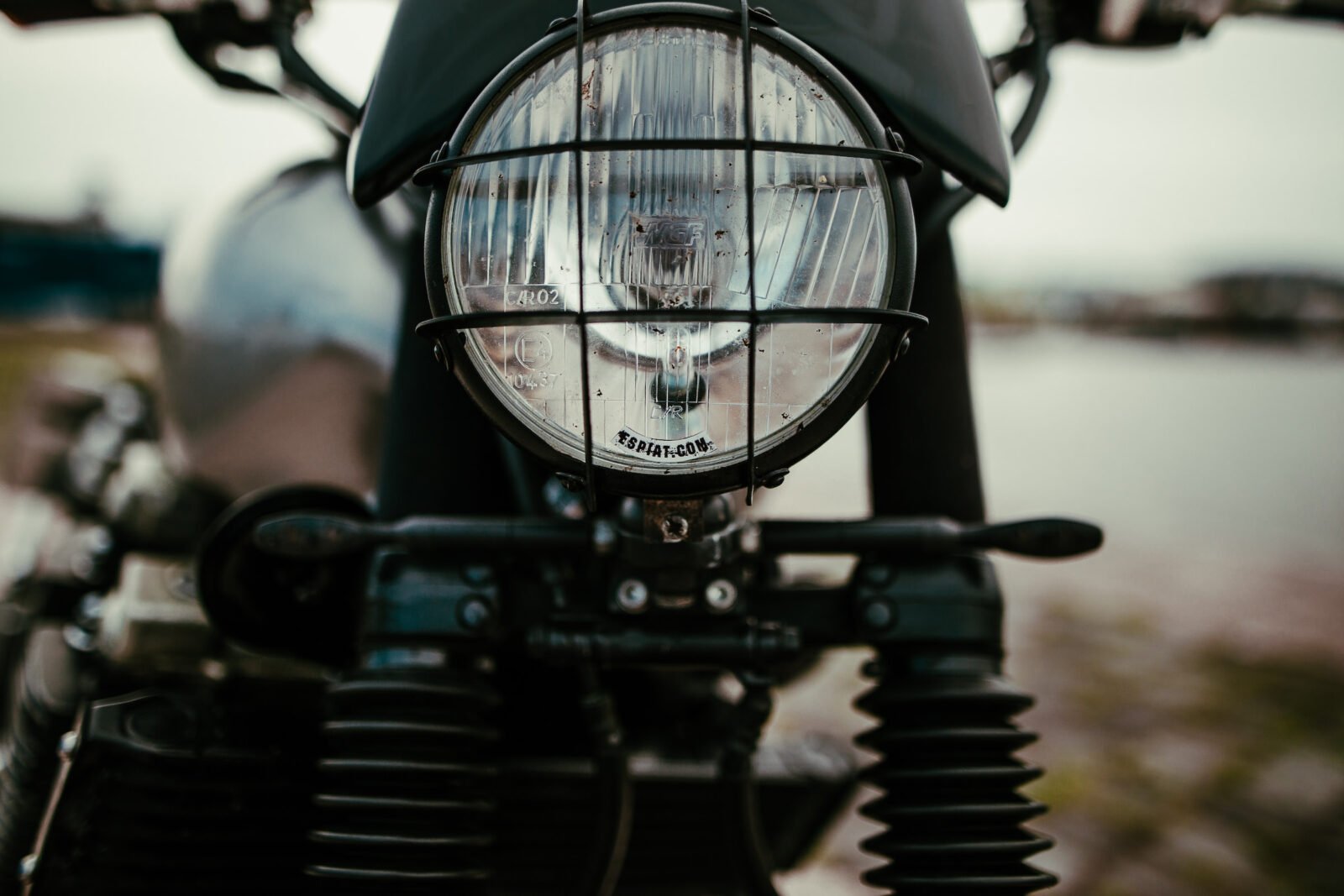 The Yamaha XJR1300 is probably the motorcycle Godzilla would ride, if he had longer arms and a slightly better center of gravity. The first thing that strikes you when you see an XJR1300 in the flesh is the physical size and implied menace of it – particularly the hefty dimensions of that mighty inline-4.

The Yamaha XJR1300 was released in 1998 as a replacement for the outgoing Yamaha XJR1200. As you may have already suspected, the two models have a lot in common.

Both of the XJR-series bikes can trace their lineage back to the Yamaha FJ1100 that first appeared in 1984, with its 1097cc inline-4 cylinder engine, double overhead cams, 4 carburetors, a 5-speed gearbox, and an upright riding position.

The design of the FJ1100 engine proved to be significantly extensible, the capacity was increased for the FJ1200, and this is the engine that would be used in the XJR1200, before being increased again to a capacity of 1251cc for the XJR1300 which first appeared in ’98. 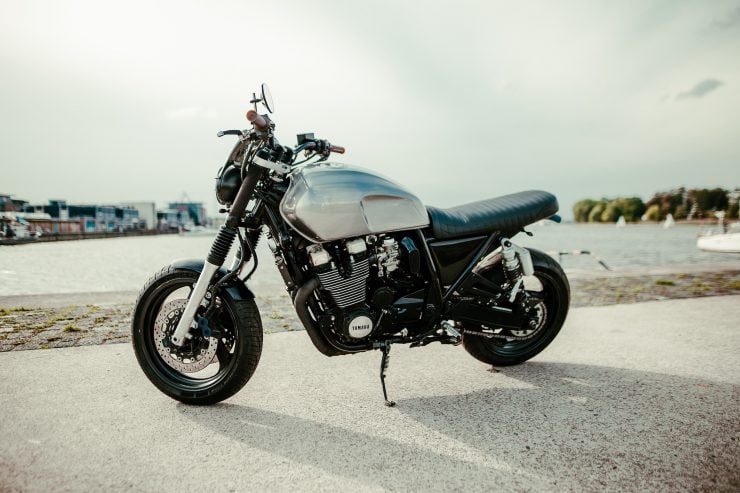 The design of the XJR1300 dispensed with any illusions of modernity. This was to be a motorcycle built to be a brute, without any of that newfangled suspension technology like inverted forks, a mono shock, fuel injection, or fancy alloy perimeter frames.

Just like its predecessors for countless decades the XJR1300 has a steel tube cradle frame, right-way-up forks, twin rear shock absorbers, and a rack of four carburetors. It’s a simple formula, and it works.

Power varies between the model years from 1998 to 2014, but you can expect approximately 105 bhp and 80 ft lbs of torque shifting a dry weight of 224 kilograms (493 lbs). Owners love them for their brutal acceleration and hefty street presence, though the stock suspension can be a little overwhelmed by the weight at times, particularly in more technical corners. 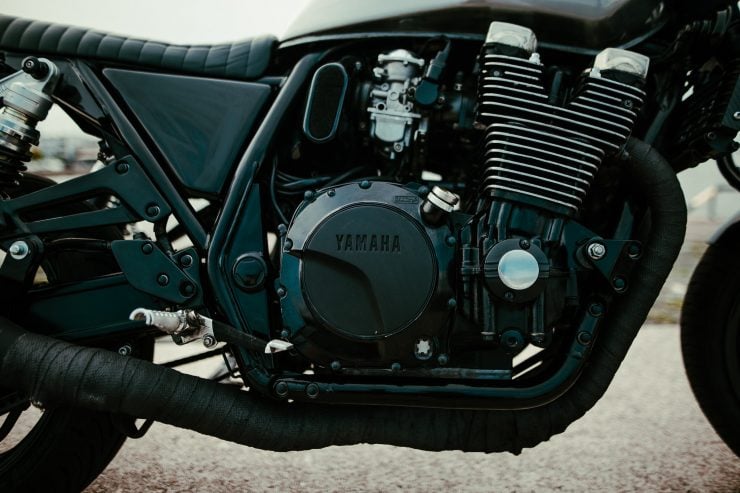 Espiat is run by a friendly German artist and designer named Daniel Schuh, he does work for startups, agencies, sport clubs, and companies of various sizes. When he’s not on the clock his passion turns to motorcycles. As with many Germans, Daniel has a strong focus on practicality, and he builds custom motorcycles to be faster, better handling, and more capable – not just better looking.

Daniel builds his customs in his own garage using hand tools and strictly no digital technology like 3D printing or CNC machines. When asked to describe his ethos he said “No bling bling, no fancy sh*t! My bikes are handmade, with quality parts and persistent craftsmanship. Every bike has a unique feeling to it. They are statements of art and freedom, their spirit and soul. It’s not about expansion and profit. It’s all about the bike, its designer, and its rider.”

This build started with a stock Yamaha XJR1300 that belonged to local friend Lars – the project brief was simple: do what ever you want but the completed bike must have two useable seats and a monochromatic finish. Daniel had free-reign to take to the bike with his wrenches and create something unique. 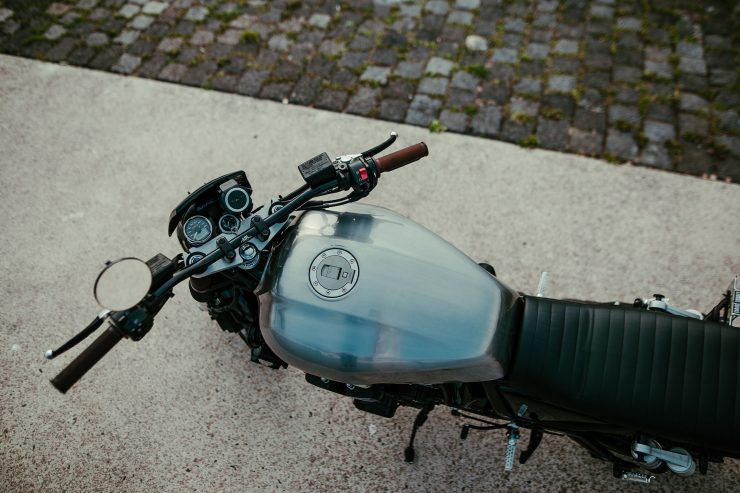 Once stripped down the fuel tank had its paint removed back down to bare metal, Daniel then spent countless hours working on a solution to keep the bare metal look – inline with Lars’ request to keep the bike monochome. Once he found a solution that worked with clear coat, he turned out a beautiful brushed steel tank that acts as a centerpiece of the bike.

Those with experience tuning the XJR1300 will tell you you can go from ~105 bhp to ~120 bhp with a sports exhaust and re-jetted carburetors. This is what Daniel chose to do – increasing power notably without getting into the internals and risking the introduction of something that would affect the engine’s legendary reliability.

The stock indicators were removed and replaced with mini units upfront and an integrated LED brake light and indicator strip in the rear. A new seat base was fabricated and topped with a new low-profile leather seat.

The completed bike is a testament to the iconic Yamaha XJR1300 – it’s a stripped back brute with prodigious power and the street presence of a moderate-yield nuclear warhead. If you’d like to see more from Daniel you can click here to visit Espiat. 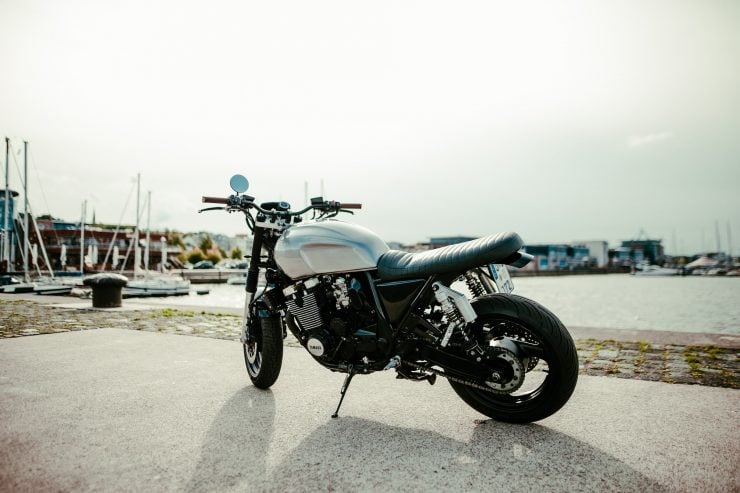 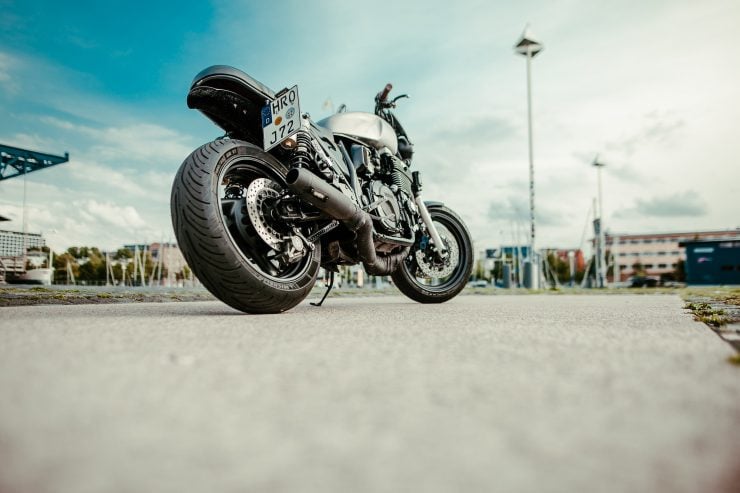 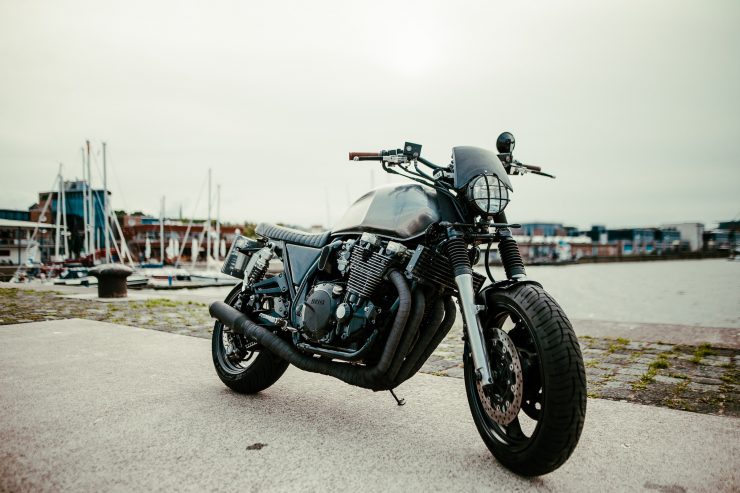 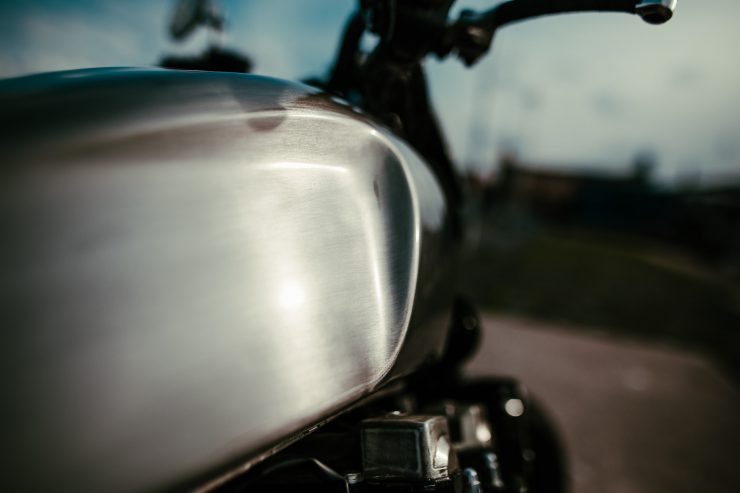 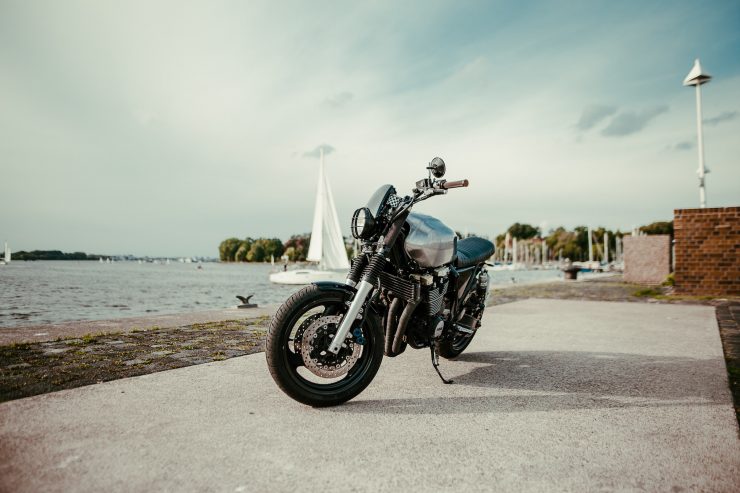 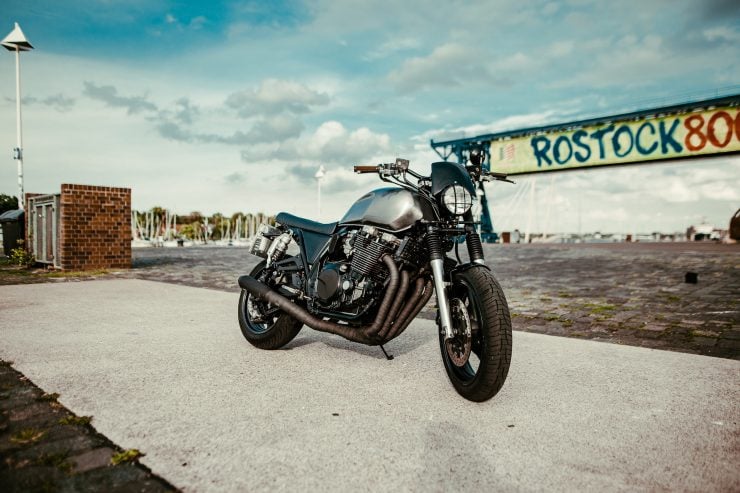 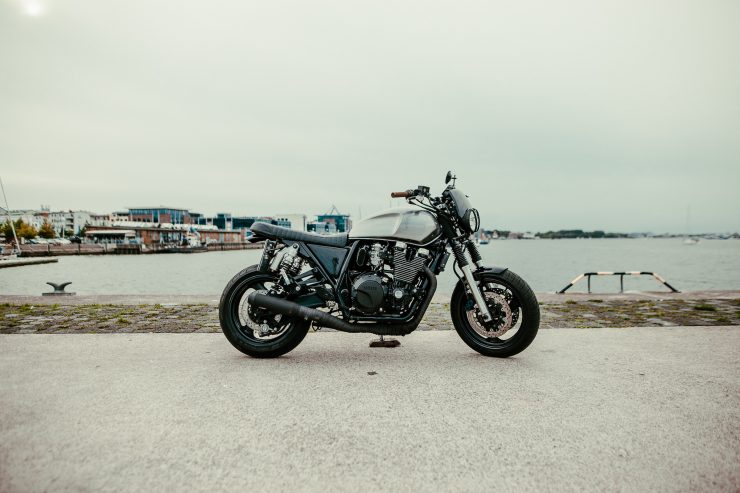 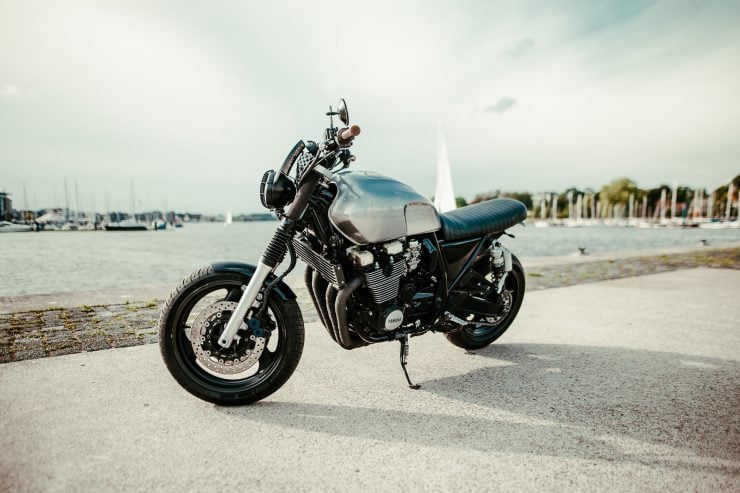 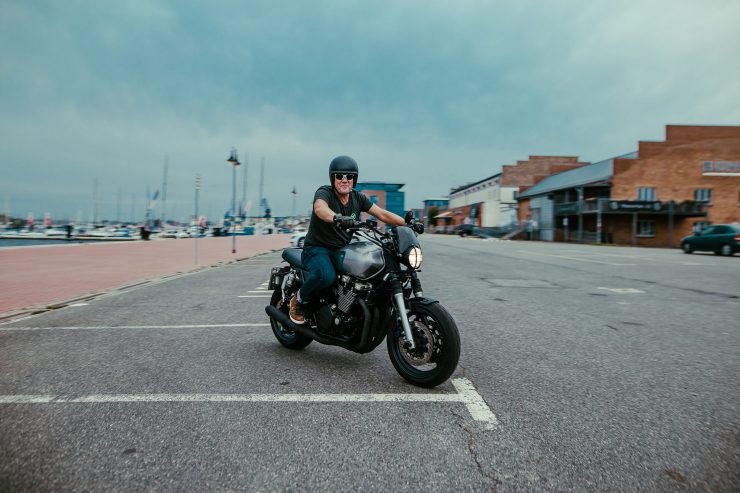 The Dab LM-S is a 100% road-legal production motorcycle that has passed both Euro4 and TÜV standards – two of the hardest anywhere in the world. Typically we don’t see custom motorcycle builders taking the…