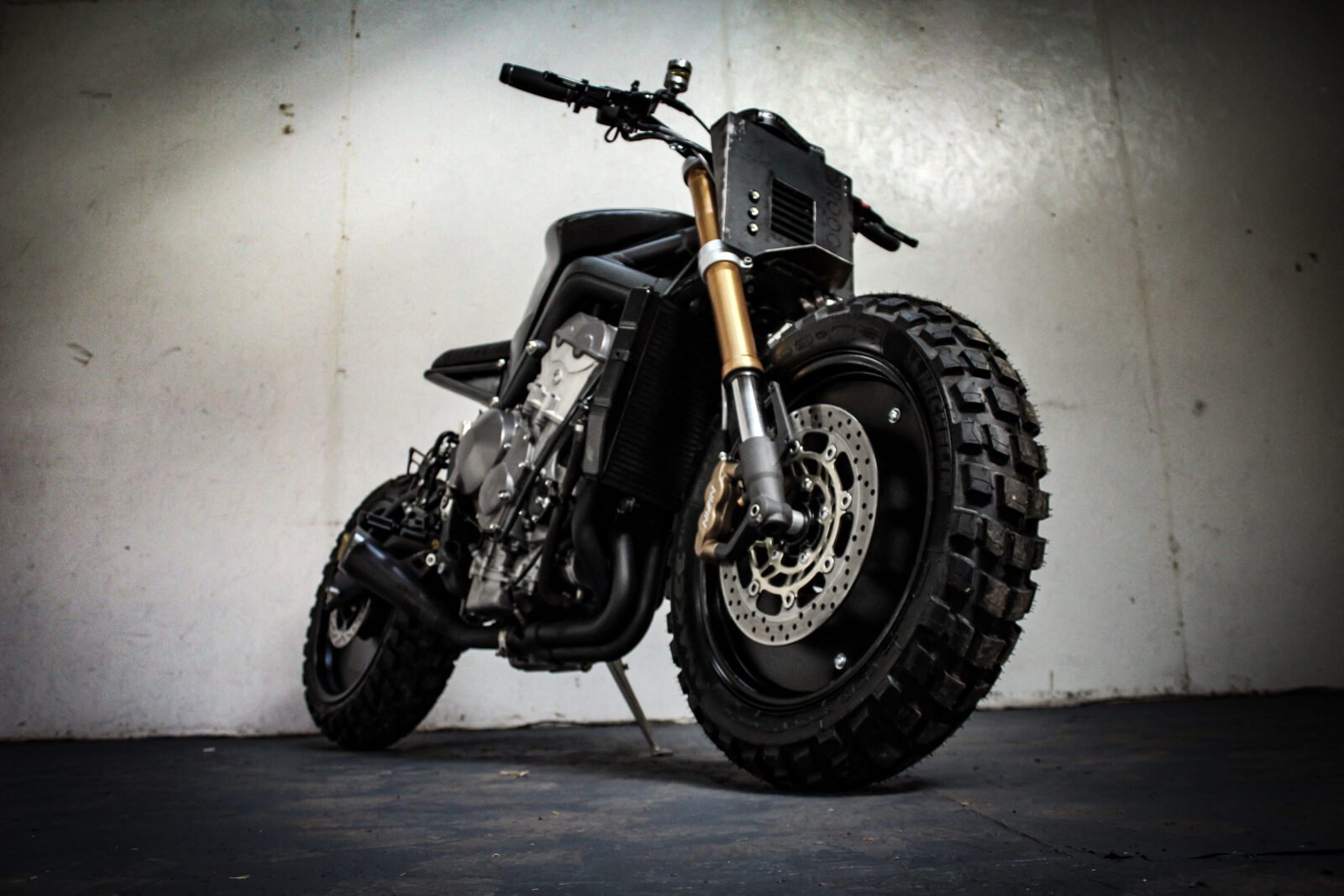 This custom Triumph Daytona 675 is the work of Droog Moto – a highly-regarded custom motorcycle garage based out of Washington State that’s run by an enterprising young couple named Max and Erica Droog, known for their tough-as-nails, post-apocalyptic scrambler builds.

The Triumph Daytona 675 was released in 2006 to significant acclaim by the motoring media – particularly in the United Kingdom. Triumph devised the triple-cylinder as a direct competitor for Japanese 600cc superbikes like the Kawasaki Ninja ZX-6R, the Honda CBR600RR, and the Yamaha YZF-R6. 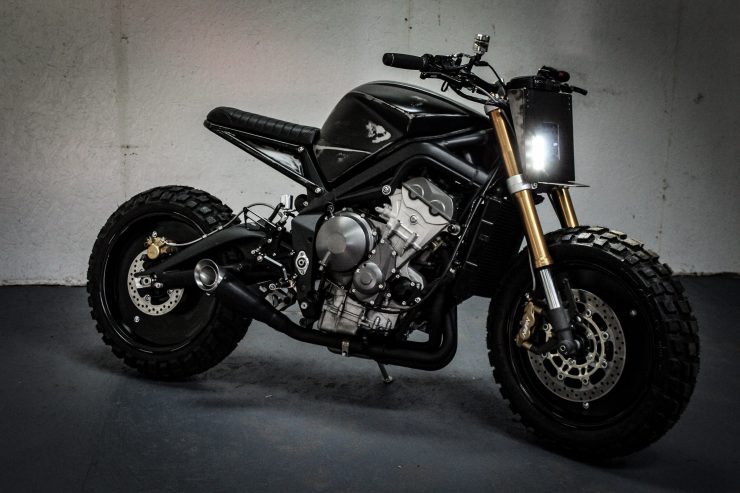 The final configuration of this new triple has a capacity of 675cc, with double overheads cams, 12 valves, liquid-cooling, a bore x stroke of 74.0 mm × 52.3 mm, a compression ratio of 12.65:1, multipoint sequential electronic fuel injection with twin injectors and forced air induction, and 123 hp at 12,500 rpm, with 53.3 ft lbs of torque.

Power is sent to the rear wheel via a 6-speed close ratio gearbox with a chain final drive. The dry weight of the 675 is a rather svelte 165 kilograms (plus or minus a few depending on model year), and the bike can manage a 1/4 mile time of 11 seconds with a 0 to 62 mph time of 3.3 seconds with a competent rider.

Triumph built the Daytona 675 and its higher-specification brother the Daytona 675R until the 2018 model year before discontinuing the model – though rumors abound that we’re going to get a new version of the bike in 2019 with an all-new engine and chassis. 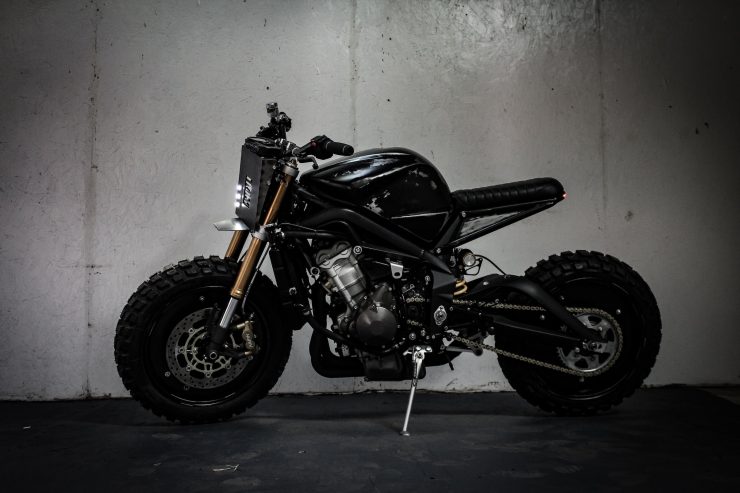 The motorbike you see here is so far removed from its original form that most would have no idea it started life as a fully-faired superbike.

Droog Moto are well known for their street scramblers with knobby tires, distressed fuel tanks, and gob-fulls of post-apocalyptic charm.

I’ll hand over to Max Droog now to give you the story of the Daytona 675 build:

We wanted to take this triple powered track monster and give it the Droog Moto attitude. Paired up with Triumphs amazing 3 cylinder motor and what we had in store for it, we knew we had to get our hands on it.

The build began by removing all the unwanted panels and components to expose the Daytonas internals and exposed workings. We ditch the stock subframe and fabricated a more streamline one to flow with our body lines. This was complimented with a new custom seat and housed some minor electronics and an Anti Gravity Battery. The rear hoop also conceals the rear lighting that is equipped with LED signals and tail lights.

The fuel tank was removed of the stock paint and was given our Droog Moto signature look. To keep the Urban Menace appeal our custom tracker plate was put in place along with a center mounted vent to work with Triumphs air intake system.

The tracker plate was then equipped with 3 very bright LED lights and discreet turn signals, along with the new speedometer mounts. All of the electronics were tucked and re-located to be out of sight and keep the build looking clean.

The wheels received our handmade aluminum wheel inserts and then wrapped in Michelins Anakee Wild tires. The exhaust system was re worked to flow with the build and connected with a stealthy black silencer to give this bike that deep 3 cylinder growl. We ditched the stock clip on bars and went with our Droog Moto 1 1/8” bar and chunky grips.

This build is a blast to ride. It is light, fast and now has the abilities to go where no Daytona has been before. 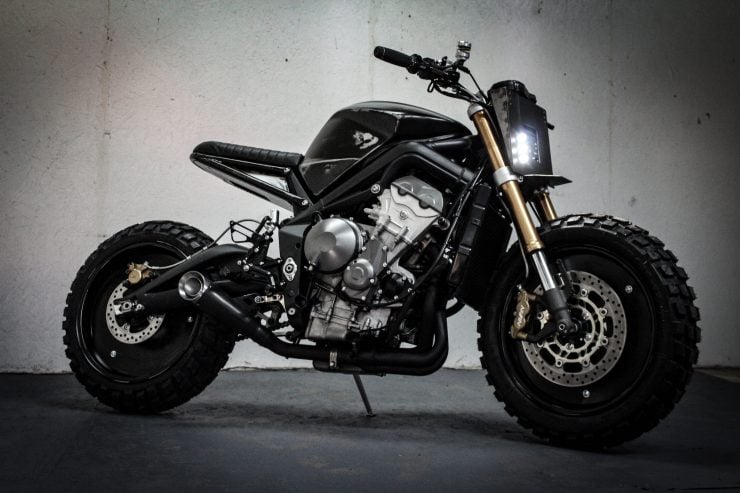 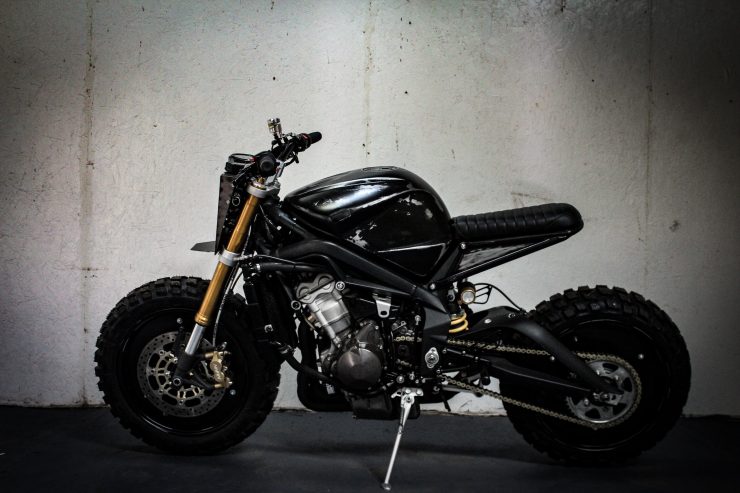 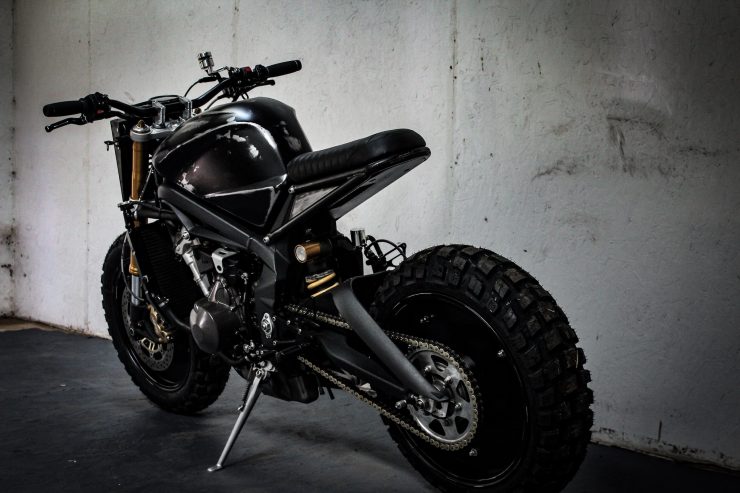 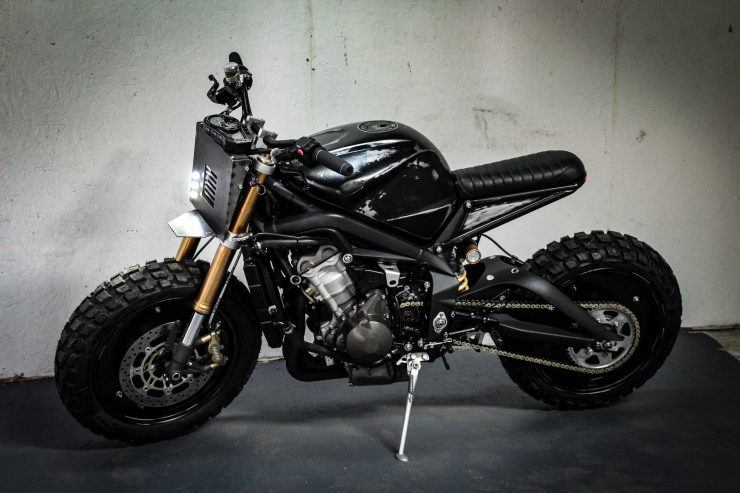 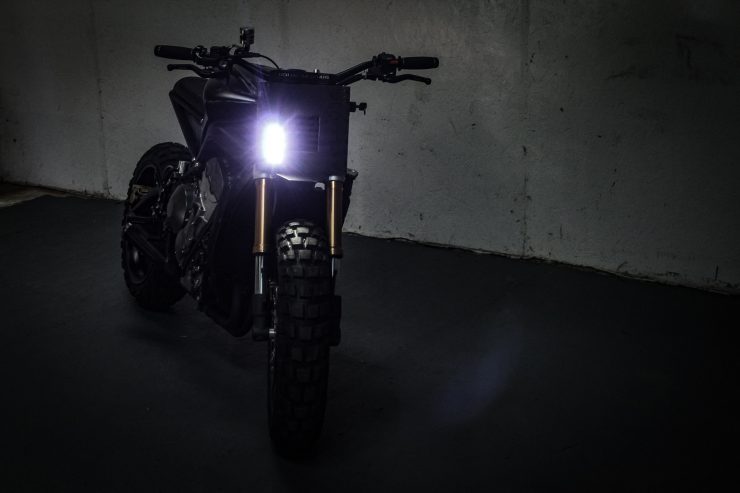 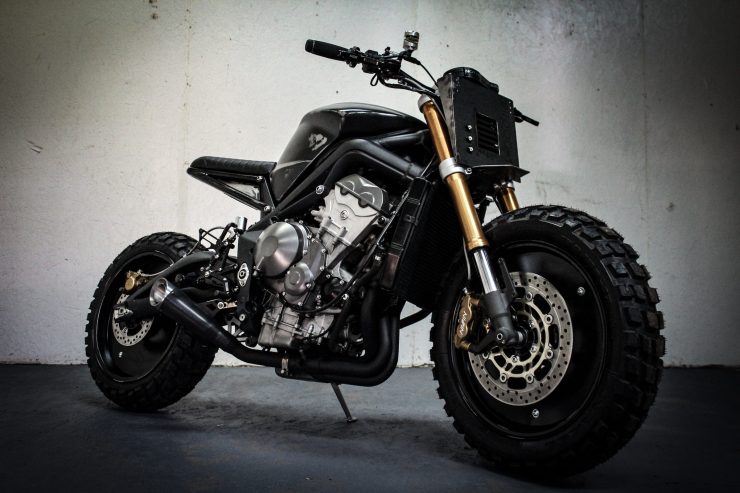 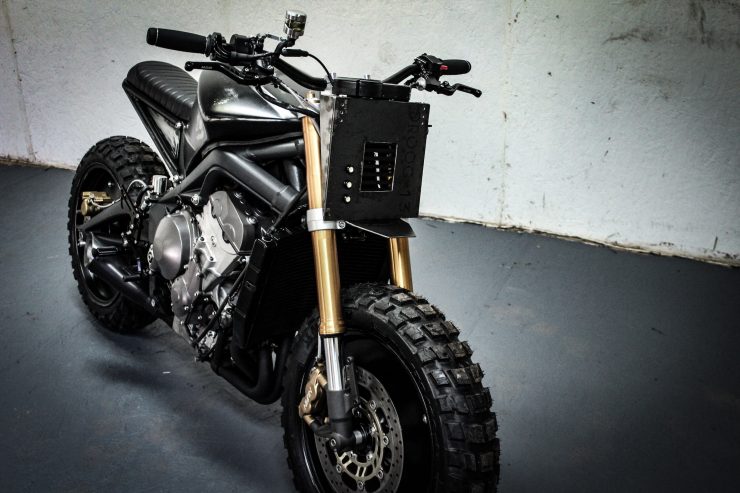 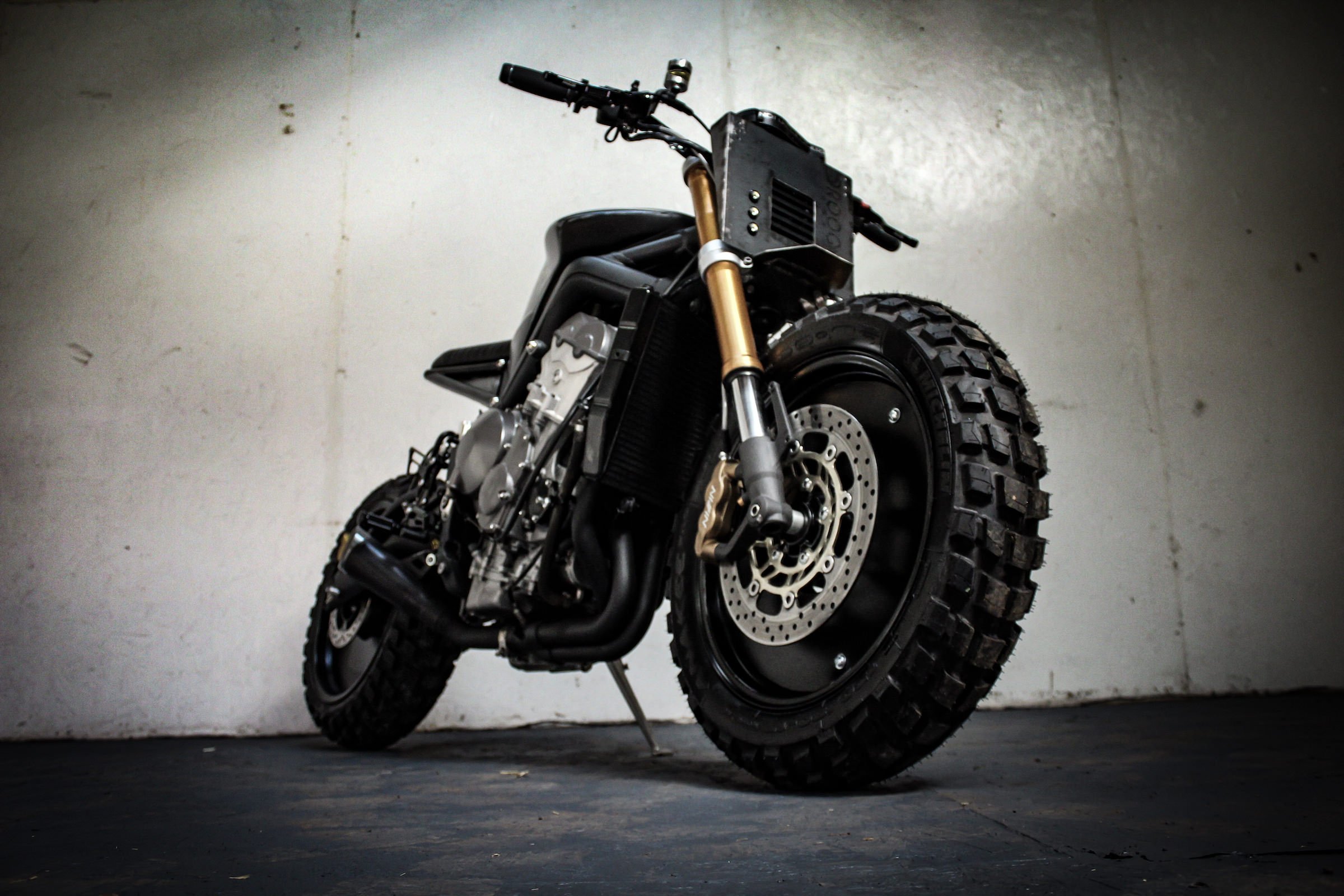