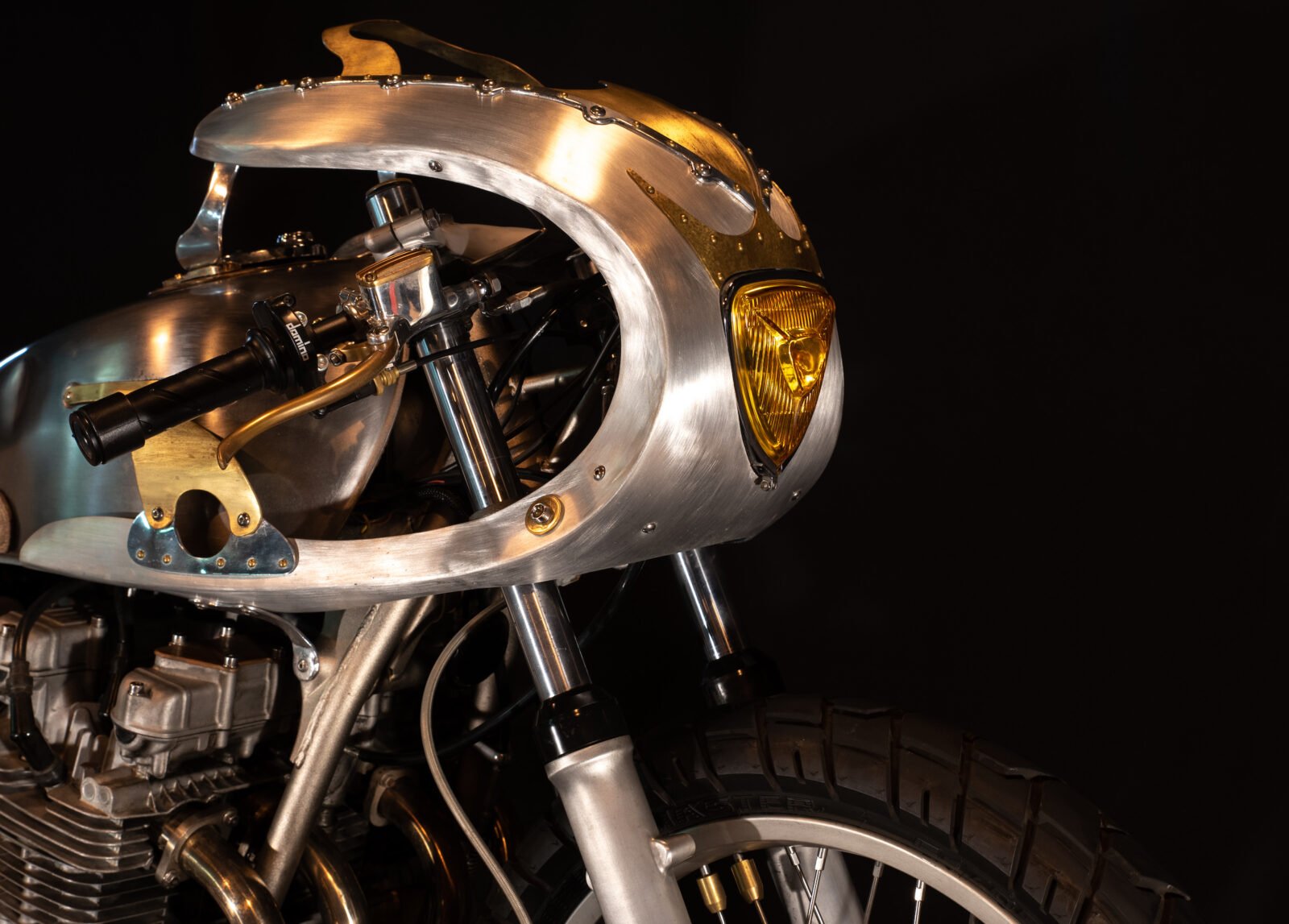 The unusual custom Kawasaki KZ650 you see here is the work of Brent King, founder of Mifune Werx Custom Motorcycles based out of Ohio. We turned it over to Brent to tell us about the build in his own words, it’s a fascinating story resulting in a bike unlike anything we’ve seen before.

I am a licensed landscape architect practicing in Ohio, I have a bachelors and master degree in landscape architecture. I am Lead Designer and Principal at PLANIT Studios, a small boutique landscape architecture, graphics and wayfinding studio. My venture into custom motorcycles came out of a desire to actually build something with my hands, instead of simply drawing all day long. My goal is to build one “significant” bike per year, while continuing to work in my design profession.

I am also a martial arts instructor and own my own dojo. I started traditional martial arts at 12, and continue to practice and teach regularly. During college I became involved in the arts of Kendo and Iaido, and became infatuated with the beauty of Japanese and English weapons and armoring. I have been involved with armoring since I started martial arts (both English and Japanese) so most of my fabrication skills stems from these interests (sword fitting, chain mail, plate armor, leather armor, methods of attachment, ornament, engraving, repousse’, historic techniques of reproduction, etc).

My father was a sheet metal worker/fabricator at Republic Steel, and my mother was a florist, so fabrication and design has been in front of me ever since I can remember. I would watch my dad make all kinds of things around the house, and instilled in me a “there’s nothing you can’t make for yourself” mentality. Then my mother would chime in about what a wonderful job Dad did, but it would look better if it was this way or that way! I always felt I got the best of both of their skills. 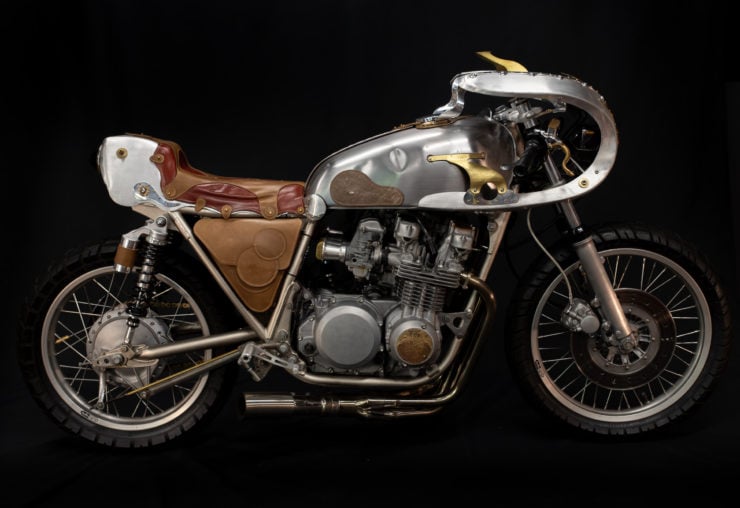 My general mechanical experience comes from working on muscle cars with my dad and my friends. My parents were pro dirt bike, but heavily discouraged street riding early on, hence, my delay in getting on the street.

The bike was purchased from a widow down the street, her husband had passed away and she was slowly downsizing all of his shop tools and vehicles. Sadly, none of their kids had any interest in any of it, (which actually kinda’ pissed me off at the time, passing these types of things down is a sacred thing in my opinion).

I had recently purchased a bundle of parts the week before for a ’78 KZ650, and I noticed the intact ’79 sitting in the corner. It was a survivor, but in pretty bad shape. I decided to take a look at it, it wasn’t running and she had no idea what was wrong with it. I tried to get it running but was not successful, it had a plethora of electronic issues, and I noticed that her late husband had been soldering recently in the battery box. It had good compression, so I made her an offer, she accepted, and I had my kids help me push the bike about ¼ mile to the shop.

I did a temporary fix on the electrical system, replaced everything that would stay with the build after it was complete, and adjusted the valves. The valves turned out to be the main culprit, they were extremely tight, and after making about 4 rounds of incremental adjustments, they were back in spec. After completing that, as long as you let the carbs fill up, she starts quicker than a fuel injected bike, believe it or not. 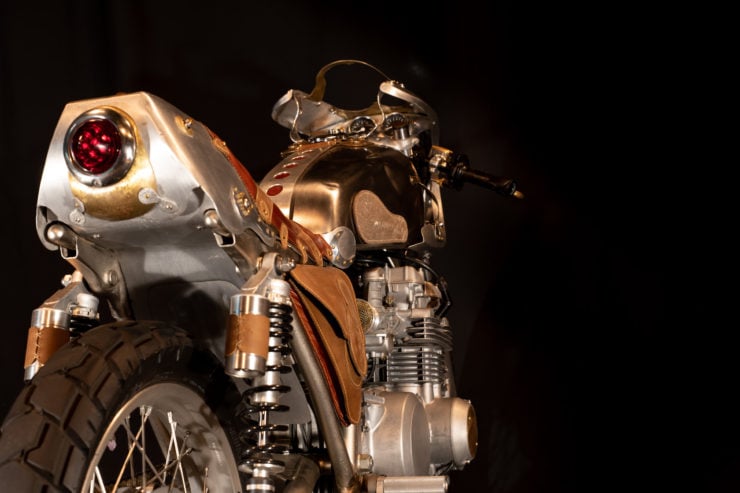 I wanted to build something different. I wanted nothing to do with a sterile, clean, café build. I appreciate the discipline and effort required for these types of builds, but I wanted a build with character, some wabi-sabi, something not everyone would ‘get’. Essentially, a piece of functional art.

Originally I wanted to take the next step in pushing my design skills on this one, but what I really ended up doing was pushing my fabrication skills. Since all of my skills were armor based, I had never done anything this large scale before, and the learning curve was a bit steep.

Shinya Kimura is by far my most important influence, and even more so after I met him and Ayu. Images of his builds are pretty readily available even going back to his Zero days, so the idea/image board consisted mostly of Shinya, and Max Hazan.

I fabricated the aluminum fairing, the aluminum cowl, the side panel, dash panel, and brass accents for this bike – anything that is not stock was fabricated by me using traditional methods like sand bags, a hardwood stump, an English wheel, planishing hammers etc.

I utilized the MotoGadget M-Unit Blue for the brain of the bike – the entire electrical system was replaced, with new wiring, reg/rec, a Dyna Tech electronic ignition and coils, and Posh switches. I also used KustomTech clutch and brake levers, Buchanon Sun aluminum rims (which I spoked myself), Dime City rear sets, Tek Bike rear adjustable shocks, Progressive front springs, the stock brake rotor was drilled, and I fitted Delkovic stainless headers with a Cohn Engineering stubby can muffler. 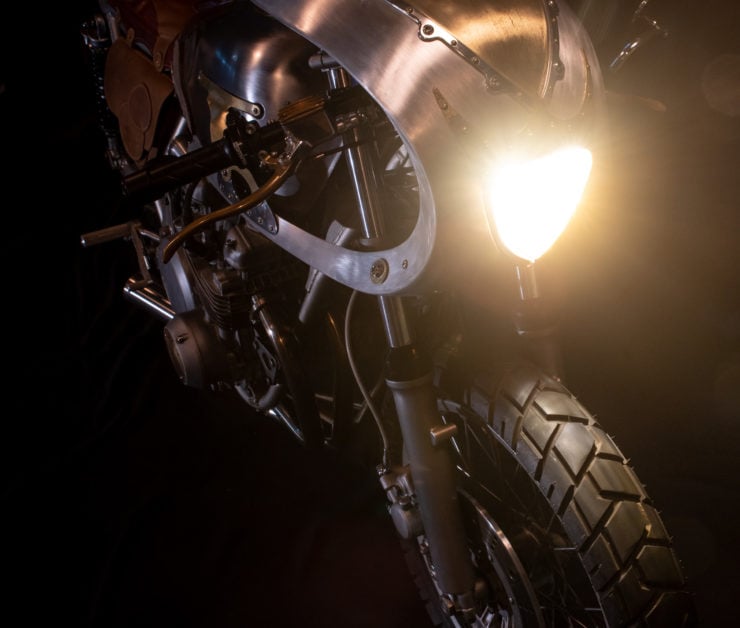 The biggest challenge on this build was the timeframe. Originally this build had no deadline, it started as a design study that you sit and look at for a while, design for a while, then change your mind a couple times before you actually fabricate something, and then redo the piece, before you are happy…err, satisfied.

I just completed building the shop in October, so I was working on this bike while I was running electrical and lighting for the shop, etc, getting things operational, much of this bike was built under temporary garden lights with extension cords. I had the design roughed up in cardboard when I saw an advertisement for the Greasy Dozen builders collective and decided to enter.

By this time it was December, and I had the fairing roughed up in aluminum and was moving along. She ended up being selected to be included in the Dozen and I was ecstatic and terrified all at the same time, because now I had a timeframe of 5 months to build a running machine that would be capable of making the Greasy Dozen Run, which was about a 150-200 mile run through rural Ohio.

This meant it had to be done weeks before so I could trouble shoot it. The frame hadn’t been nickelled, parts hadn’t been ordered, all the design decisions hadn’t been made, etc. So, logistically, for me, being a one man shop, with a goal of one bike a year, whilst maintaining a demanding professional job, it became a bit tight. 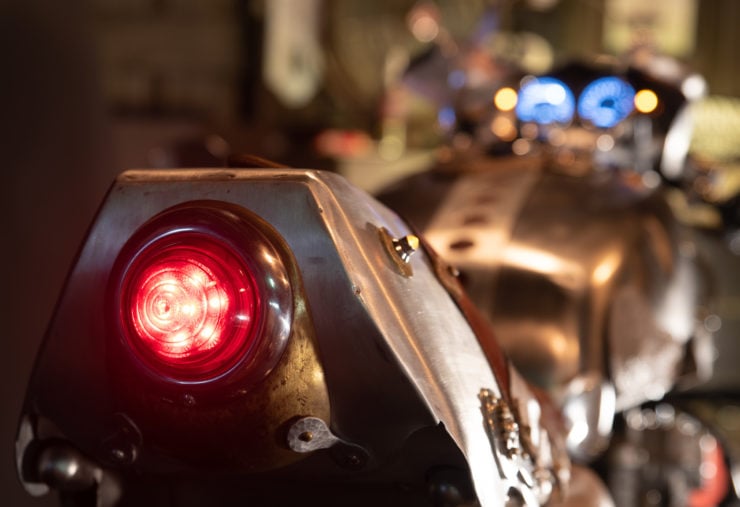 After I got it running in its stock form, I ran it for a season while I worked on the other KZ650 build named Beastie (it is on my Instagram as well) It ran very strong, I checked the top end, and everything looked good, so I left the engine alone.

The carbs were rebuilt, and rejetted for the velocity stacks and exhaust.

I had built my own stainless exhaust on my previous build, and loved how it came out, and planned to do something similar on this one, but due to time constraints quite honestly, I went with a Delkovic stainless header setup, with a Cohn Engineering stubby muffler.

This build is currently for sale, and next up is a ’73 Norton Commando – it will look like no Norton you have ever seen! For better or worse! And for the purists, the frame was modified when I got it, so no original will be harmed in its production. 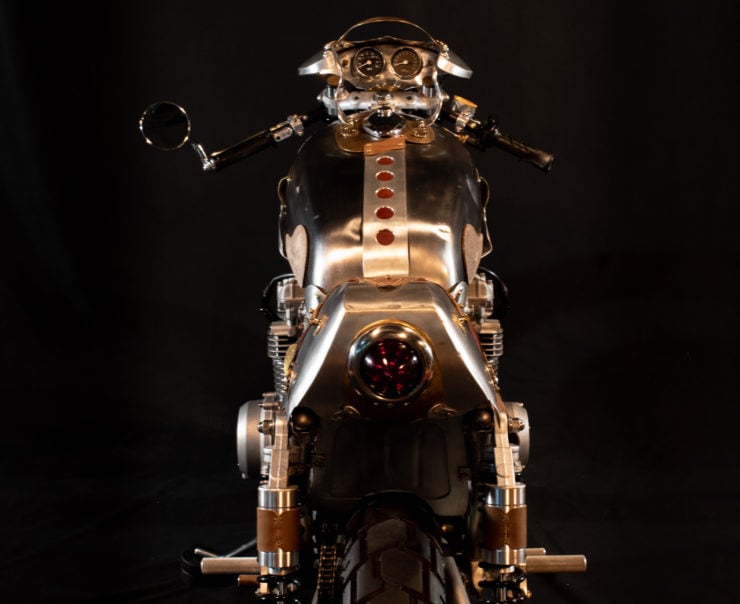 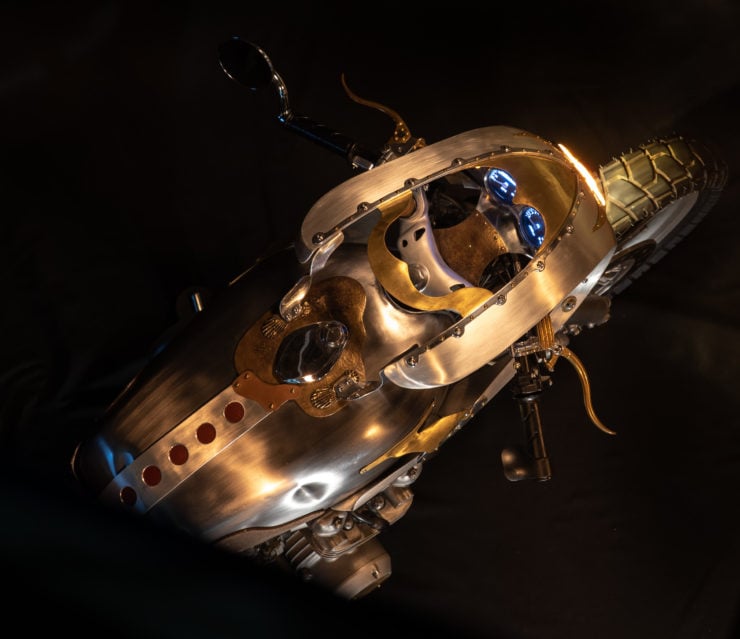 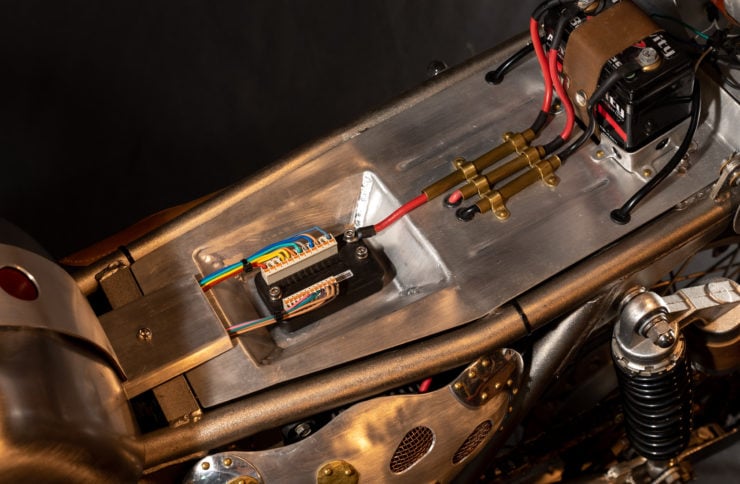 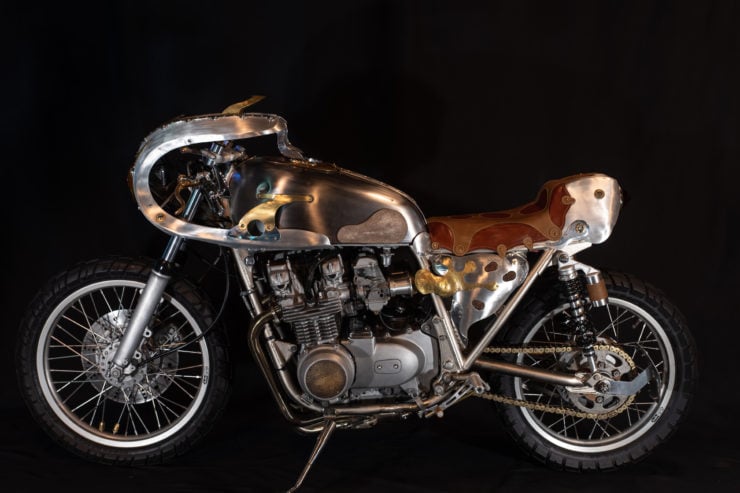 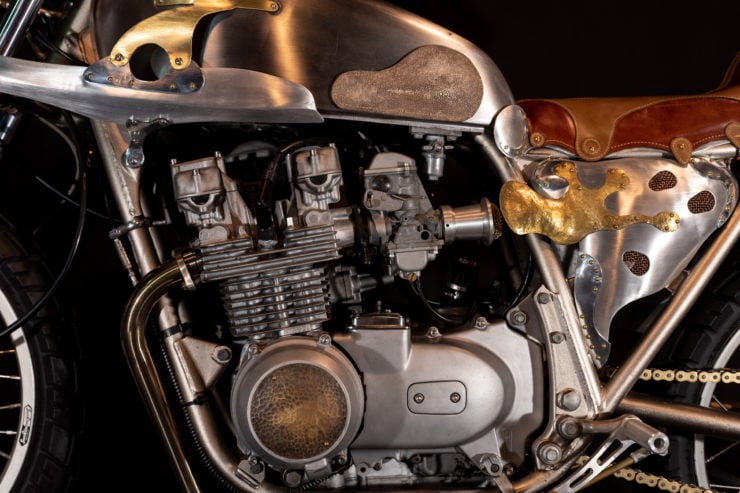 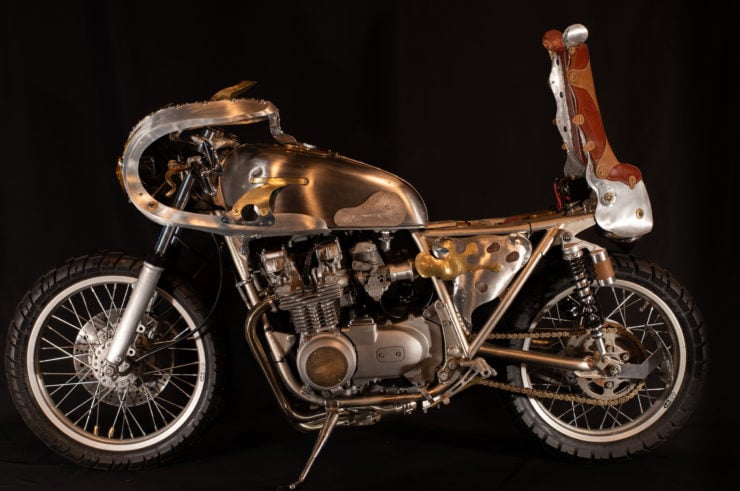 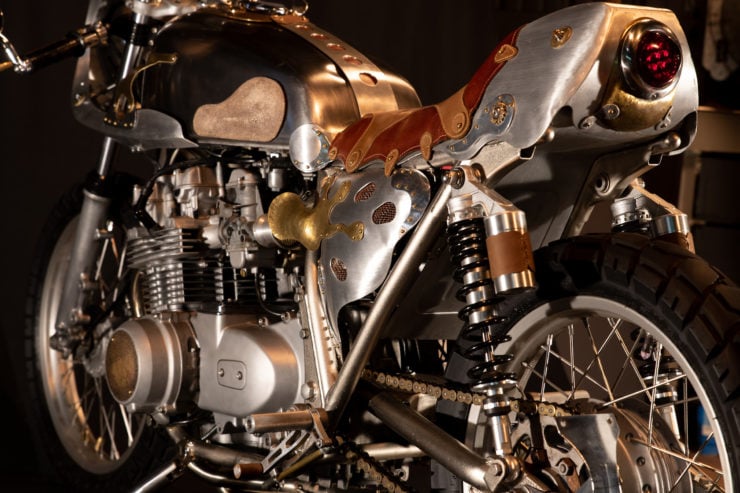 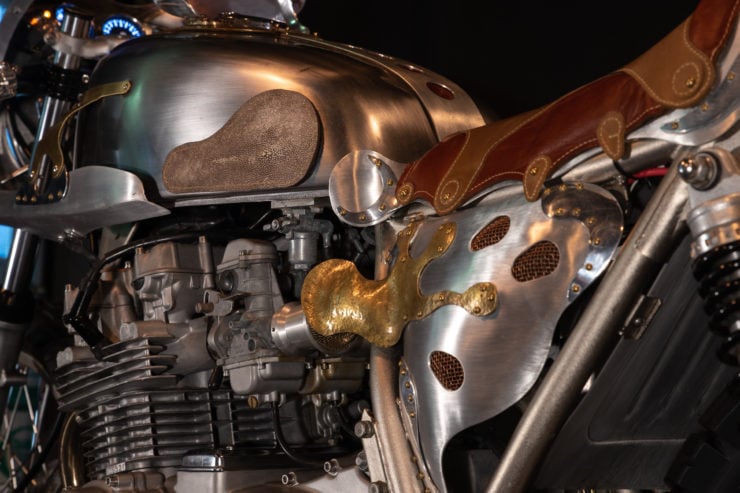 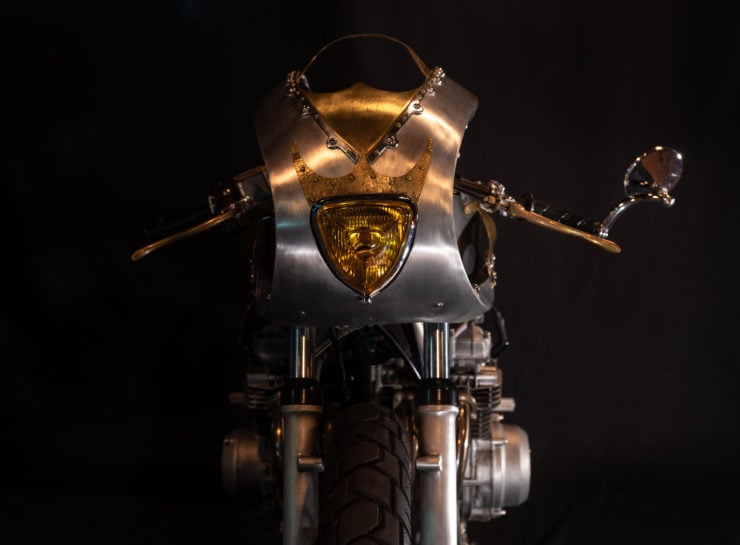 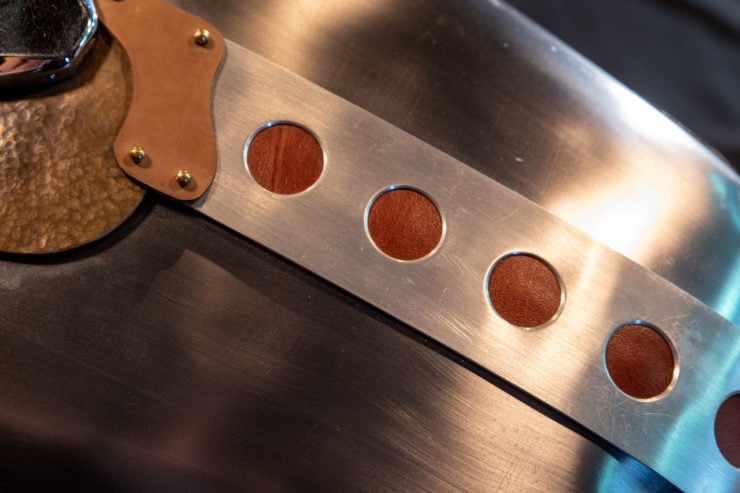 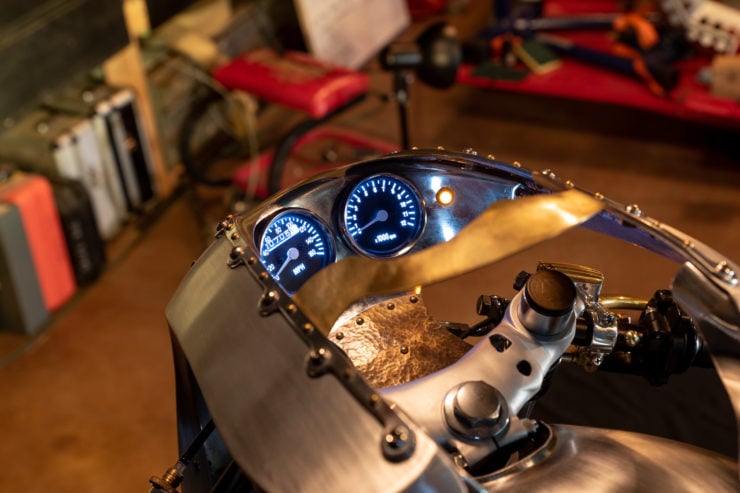 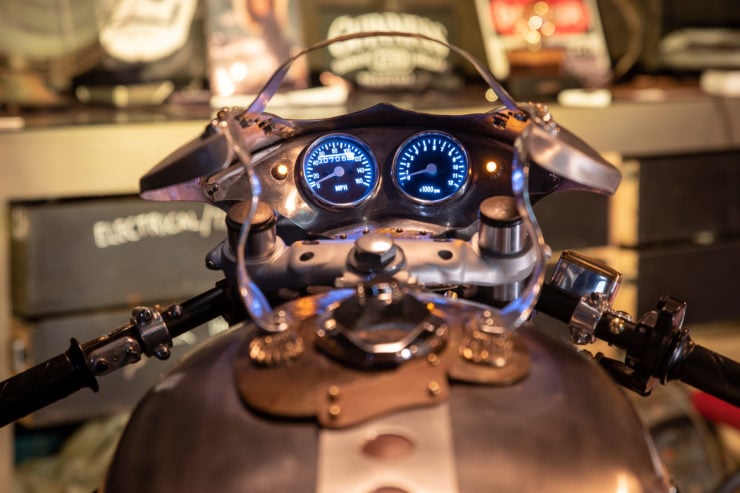 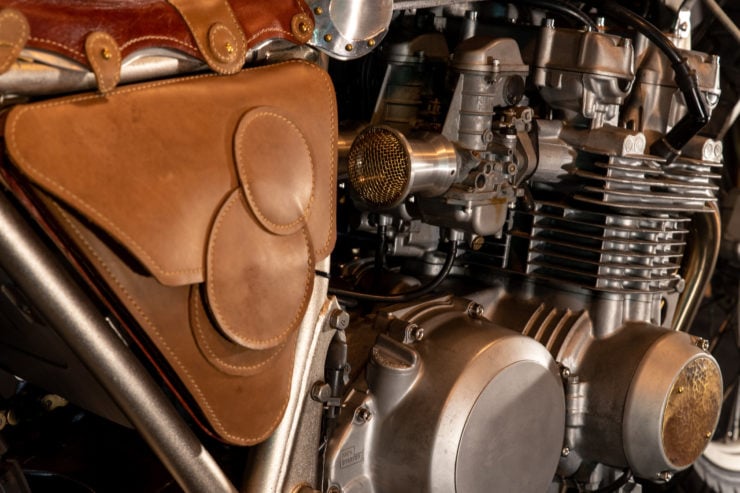