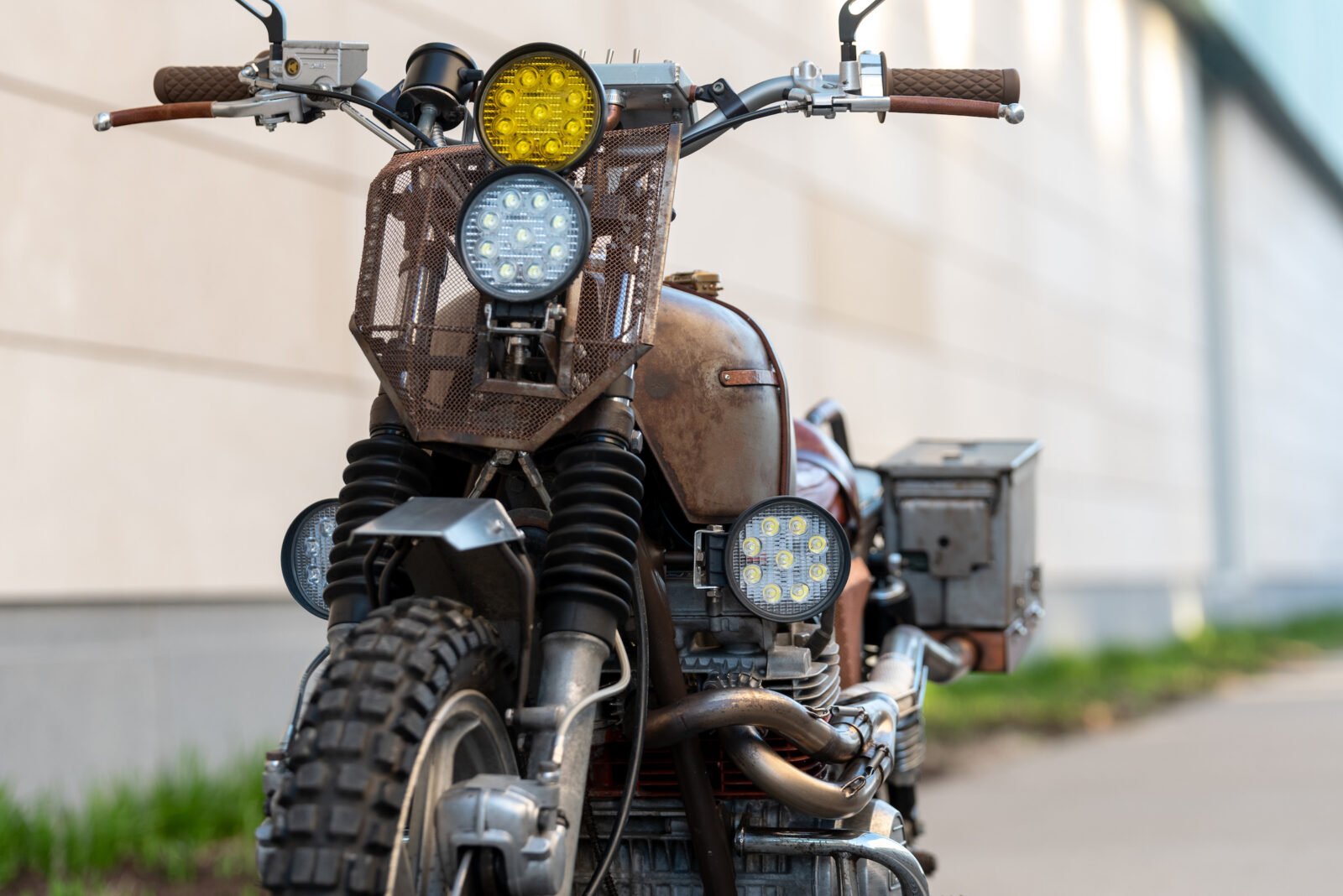 This article was written by Mifune_Werx founder Brent King, the man who built the bike you see here before you. When possible we like to bring the story of a vehicle to you in the words of the person or people who built it, to give you direct insight into their thought process.

During a community get together, I had a conversation with a guy (that can be best described as an ‘old timer’) that lived just down the street from me. He noticed I was wearing a Triumph shirt, and figuring I was one of those younger guys that wanted to look cool wearing vintage labels, he asked me: “Triumph huh? Do you actually own a Triumph!?” I responded quite proudly… “Why, yes I do”. That started an hour and a half conversation about motorcycles that ended up in his shop looking at a half a garage full of parts that he would sell me for $75.

Not having my shop set up yet, and still working out of a full garage as it was, I told him I would be back in the spring. A few months later, I found out he passed away. I felt like there was unfinished business here, and after I had heard that his widow was beginning to downsize, I approached her about the parts. She honored his price, and my kids and I packed up two engines, a frame, a bunch of tires, and crates of things I still haven’t figured out what they go to.

I was contemplating scrambler, and although the design had yet to manifest itself in my head, I commenced with cleaning and prepping regardless, assuming that the process would bring me the inspiration I needed. 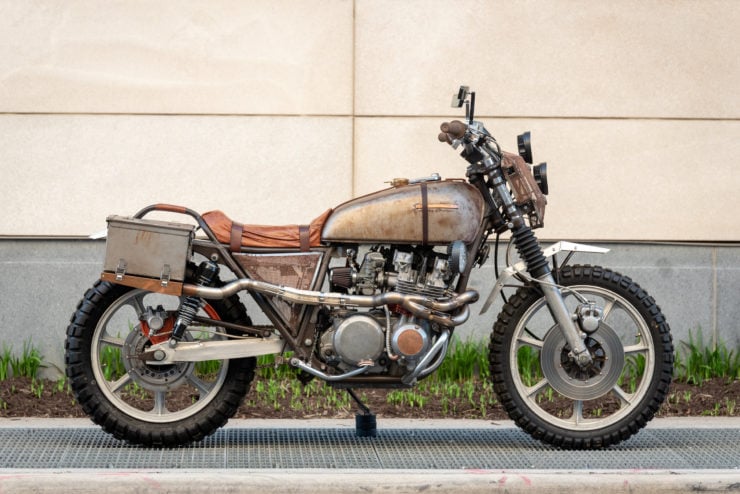 The pile originally had a GS550 tank in it, but was a bit too slender for the look I was leaning towards, so I acquired a beat up KZ tank from a local vendor. This tank had been primer coated white, and was pretty filthy, but the inside looked good. After soda blasting the primer off, the most amazing natural patina began to show itself, and that shaped the entire rest of the build. I decided to lean post-apocalyptic, with a touch of functional steampunk, as the opportunities of this genre are virtually limitless.

The top end was removed to check the cylinders. The pistons, rings, and cylinders were in excellent condition, so a valve job, and cylinder honing was all that was necessary for the engine itself.

The frame was sandblasted, de-tabbed, and prepped. The original squared off geometry of the rear KZ frame was retained and new grab bars were added as a functional nod to what this bike is designed for, off-asphalt/gravel/fire roads.

There were no electrics in the bundle, so there was no temptation to keep a harness, so all the electrics were wired with a Moto Gadget M-Unit, electronic ignition, new coils and wires, and a custom aluminum electrics box under the seat.

With the tank being a dark rich color, I wanted to continue to stress this patina with the use of natural materials in distressed steel, aged copper and leather. As copper began to weave its way into the scheme the front and side panels were designed and fabricated with anodized copper mesh with steel frame, all clear coated to discourage any galvanic reactions. A hand hammered copper tank panel brings leather and a touch of brass to the top of the tank in the vintage compass and traveler’s medallion. 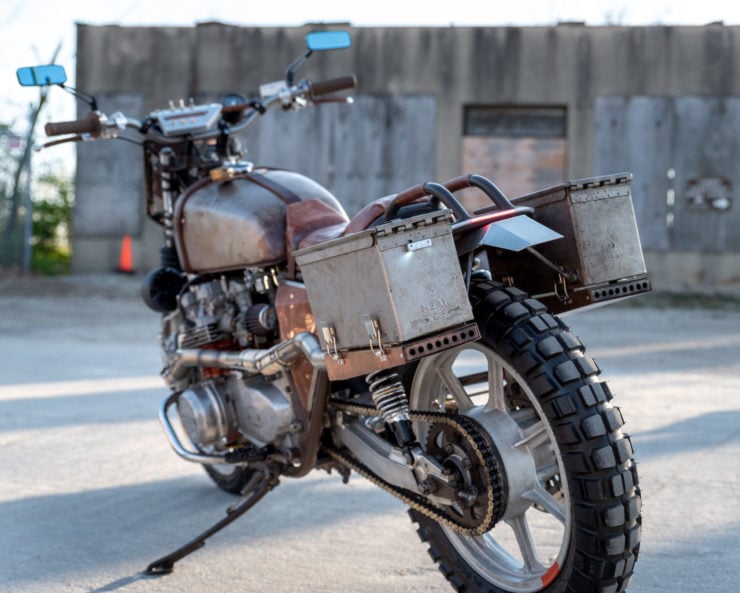 The fenders were a great opportunity to experiment with an origami concept that was used in one of our art installations a while ago. I tried to re-imagine what the fenders would look like with no curved edges, and after a dozen or so mockups, finally came to the right visual aesthetic.

With it being used off-asphalt, light would be needed, and lots of it. High output LEDs where utilized to provide maximum lumens for minimal volts. While the bar mounted switch panel allows a complete blackout, all lights can be separately turned on and off.

Storage would also be important, .50 cal military cans were used for their visual appearance and water tightness. An auxiliary light was also wired in one of the cans for trail repair or maintenance. The exhaust for this build demanded functionality, fording a stream with a standard 4 into 1 hanging below just doesn’t get it, so scrambler 4 into 2 exhausts were designed and fabricated.

An interesting design challenge came out of this; how to rectify high pipes with storage containers located where the exhaust would normally exit. Again, approaching from an origami perspective, rectangular copper mufflers were sketched and mocked up, and after dozens of attempts, a solution presented itself. Quick release levers allow easy trail removal of both mufflers and pipes.

An air gap with heat insulation keeps the cans cool despite a hot environment, I wouldn’t keep chocolate bars in there, but everything else is fine, I regularly keep my phone in there. The muffler itself is riveted, so it can be opened and the baffle and packing adjusted should a different exhaust note be desired.

It was envisioned, designed and fabricated to be “unapologetically raw”. 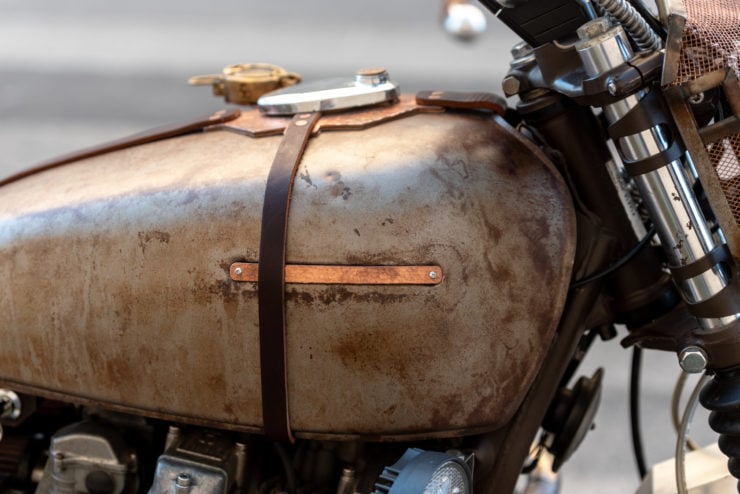 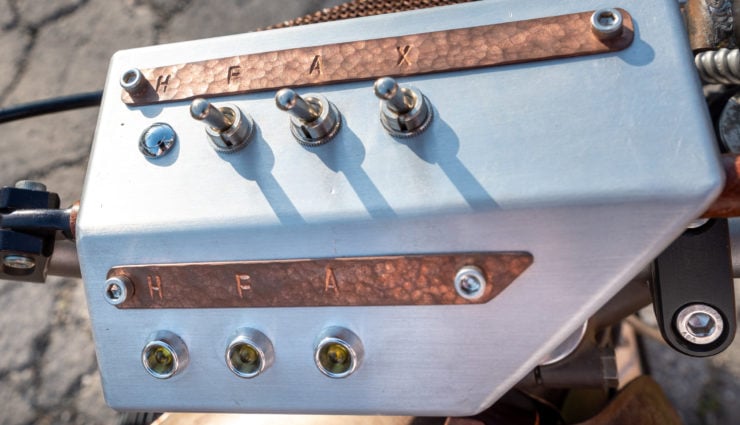 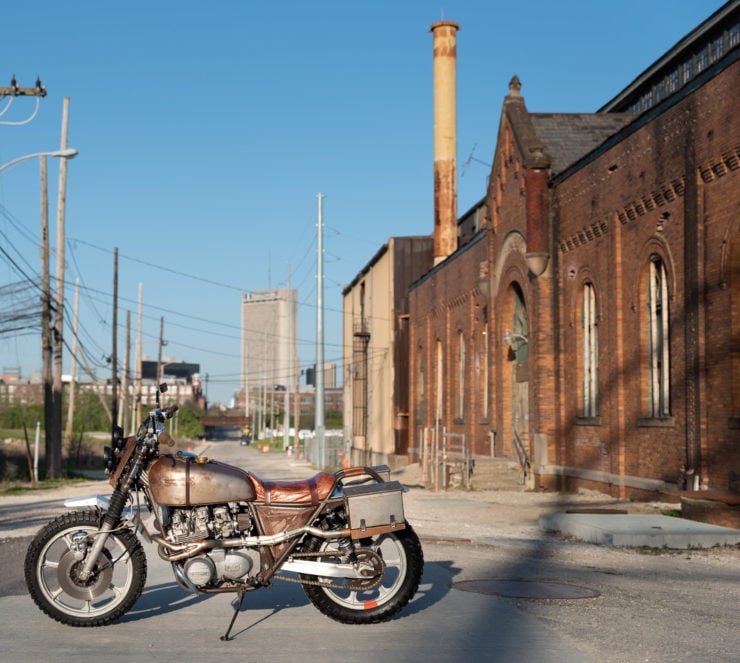 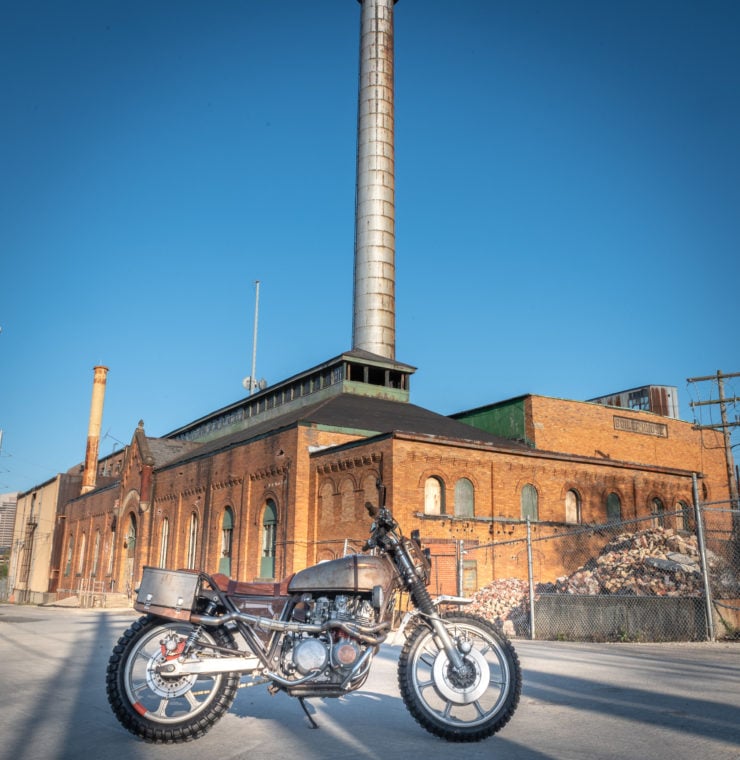 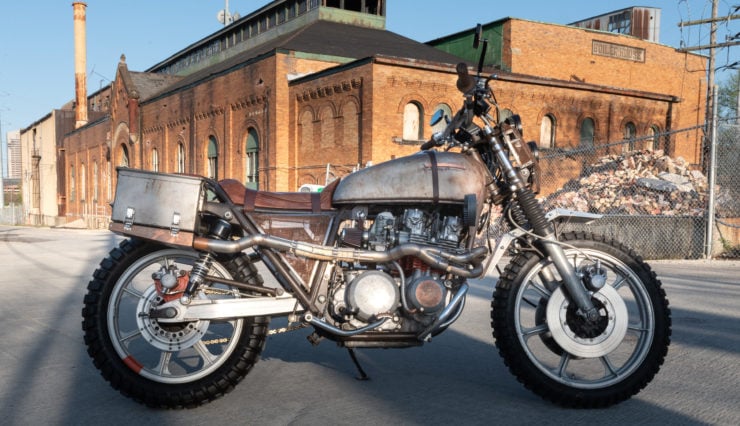 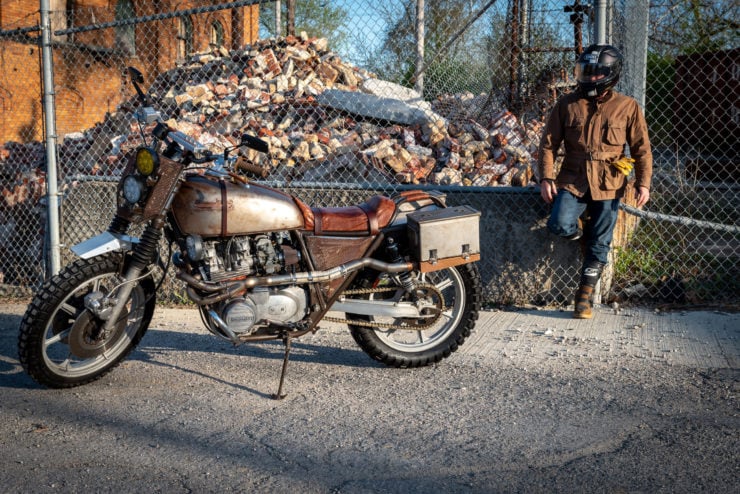 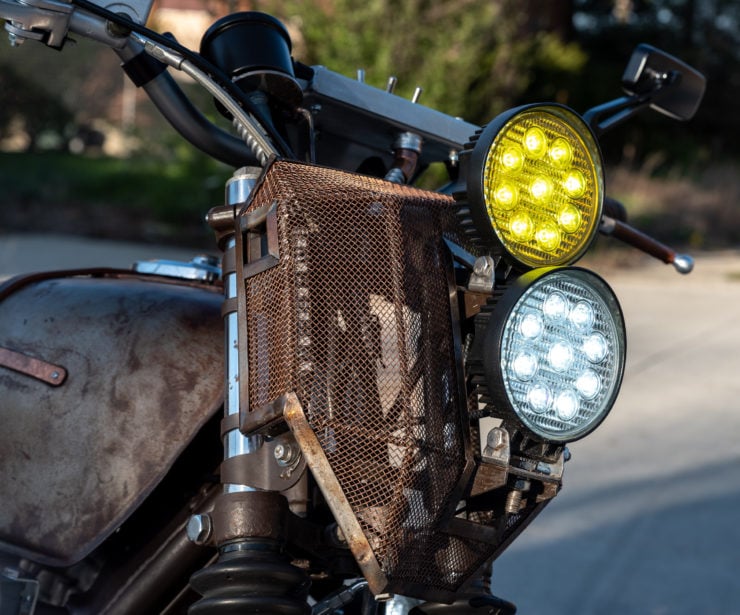 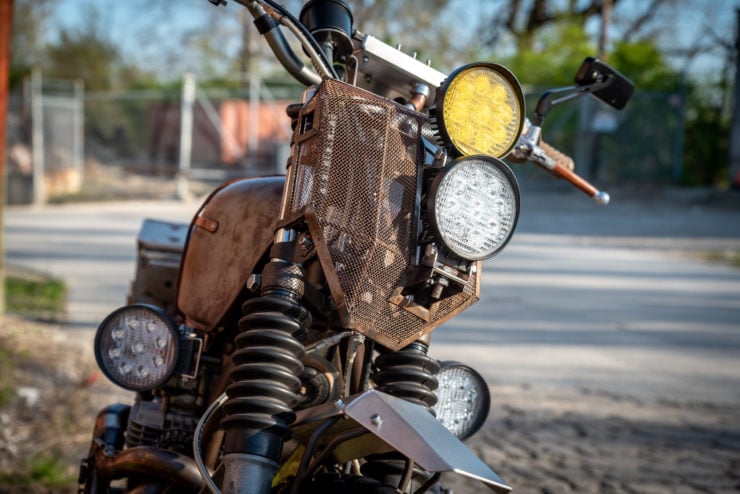 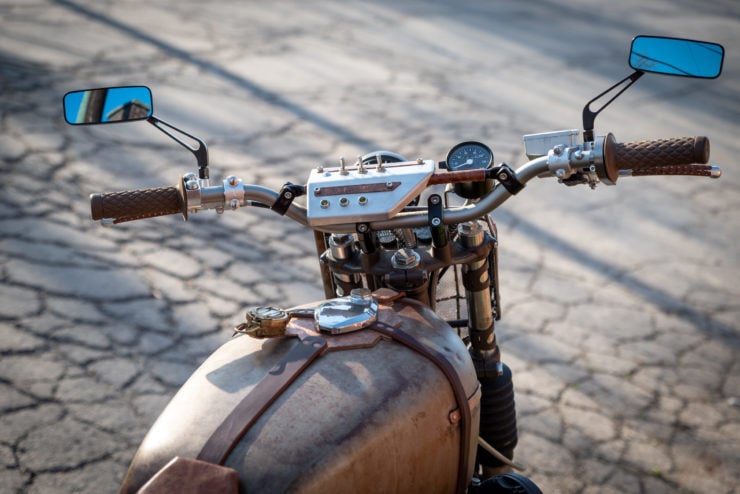 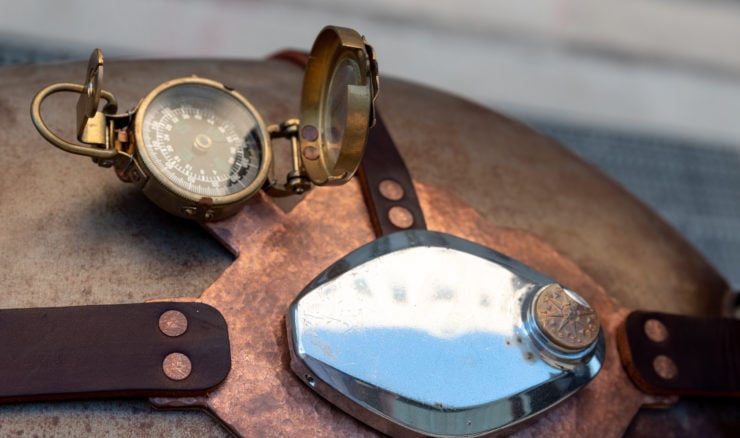 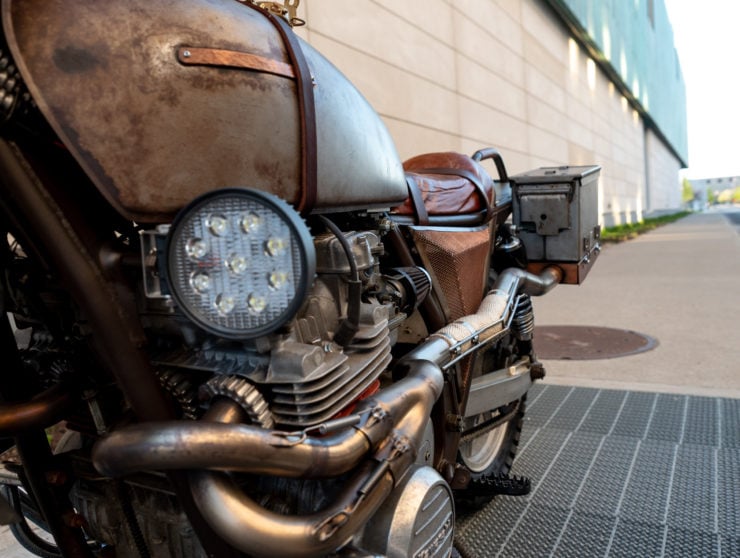 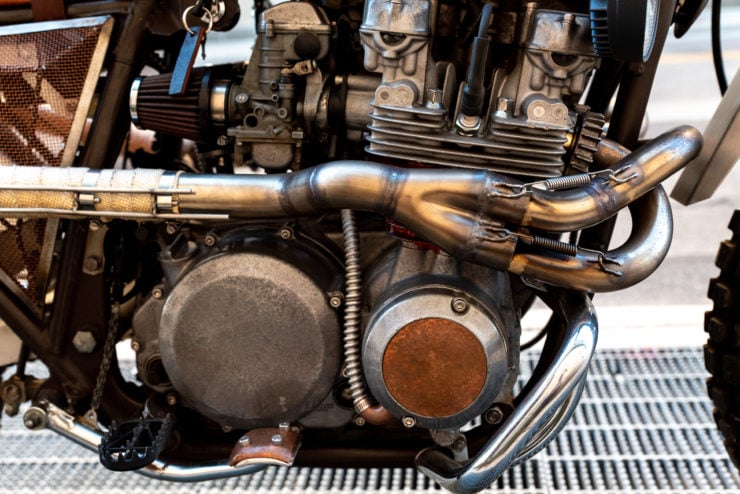 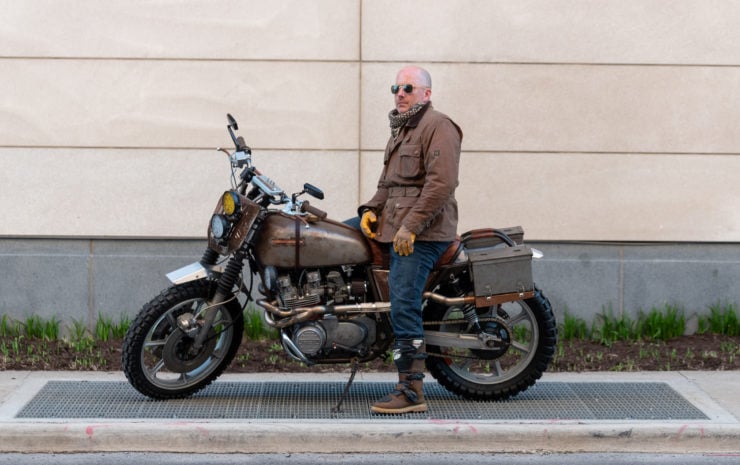 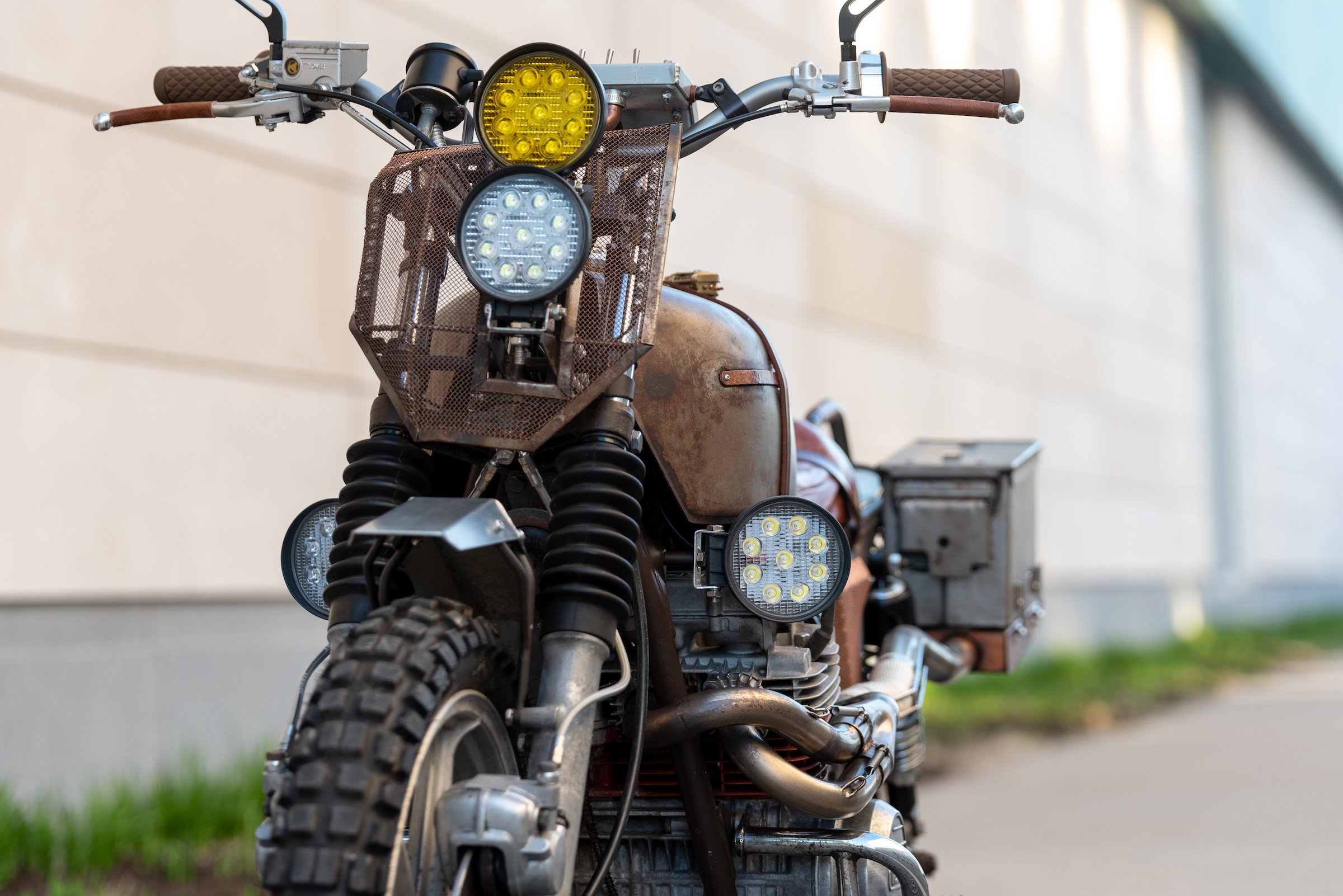