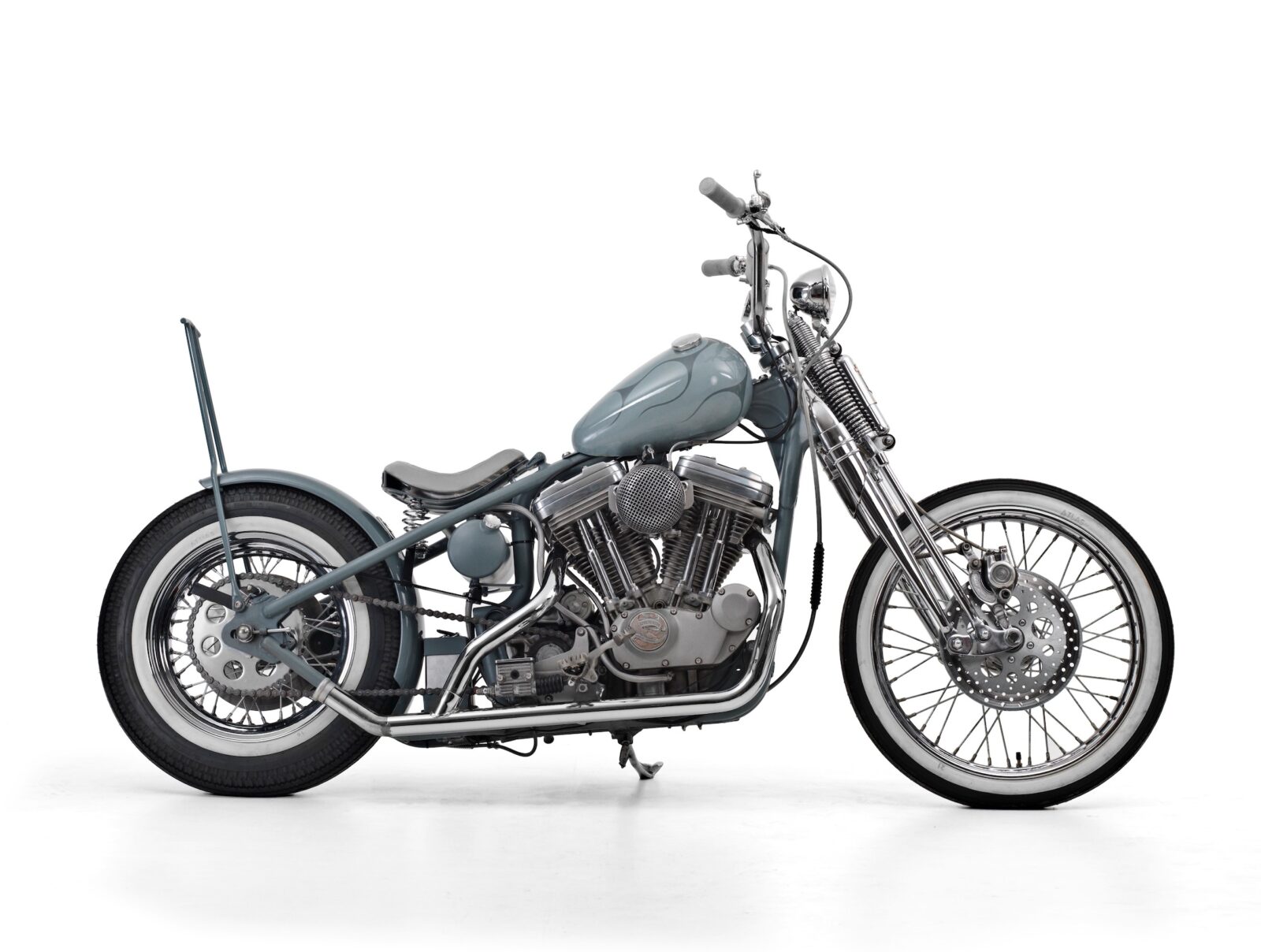 This article was written by Andreas Jönsson of Black Lanes, a Swedish custom motorcycle garage. When possible we like to bring you the story of a bike in the words of the people that built it to cut out the middle man and give unfettered insight into their methodology and thinking.

I’m a small towner who started skateboarding in the late 80’s for the fun, creativity and freedom. I loved every aspect of skateboarding and the feeling it gave me. Motorcycles and the motor culture came into my life when I realized that it shared many of the same freedoms and aspects as skateboarding.

It became an extension of that love for me. When I’m not working with Black Lanes I teach woodcrafting at a school here in Sweden. I have always loved crafting and especially wood carving. This made me start to mix wood into some of our builds. The seat under the leather is made in birch. This is the third build I’ve designed as a builder.

I love the purity of mechanical solutions, and removing everything but the essentials necessary for a bike to run. 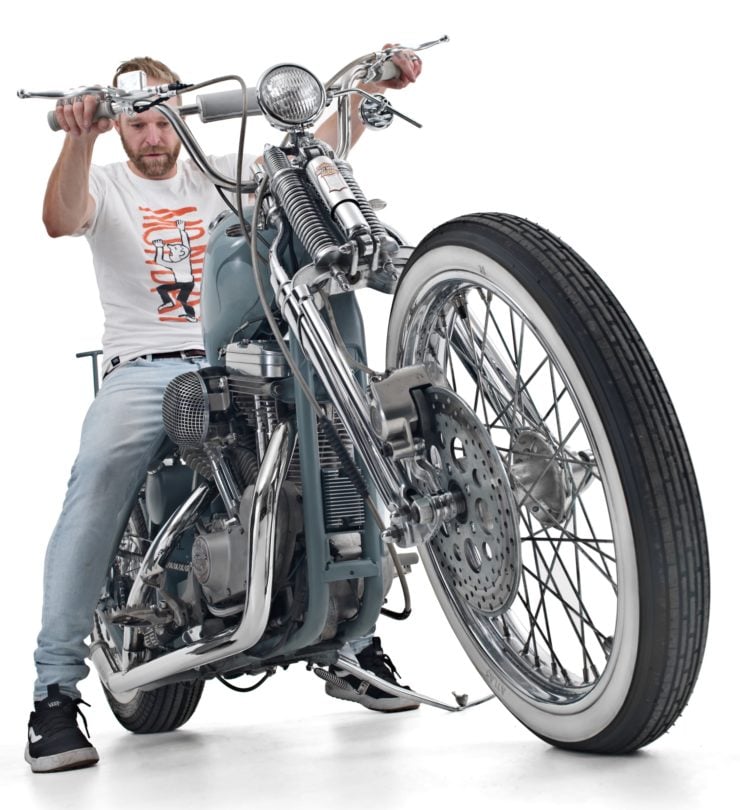 Black Lanes is a hobby and I build motorcycles that I want to ride myself. I do not build to make any profit on them or as I think people want. I rent an area in a garage in the center of Stockholm which I share with 70 other bikes and builders / riders. I thought the name Black Lanes was cool and it fits with what I do. Rollin’ wood ridin’ steel.

I wanted the bike to look stylish and clean, a bit sexy… Shiny but not too shiny. The grey colors were something that I wanted to use from the start. I wanted a mix between shades of grey and different type of metal finishes. Polished aluminum worked well with the grey and the white walls to cut things off a little bit and give a hint of that classic look. The flames where also decided in the early process. I dig the classic flames, but here in a stylish tasteful mix with the two grey shades used all over the bike.

The glass blasted engine cuts the shine off and ends with the polished rockers. The end tip on the exhaust is custom made, glass blasted and turned in aluminum. I also was looking for handlebars that could fit the bike. The idea came to me while sitting in my garage one day just hanging around, there she was, the old BMX! The idea of a BMX handlebar was born. I wanted it to look exactly like an old school BMX handlebar with even the foam roll.

My best friend Carl-Johan helped me a lot during the build process as well as Loen from Lucky Boy Customs. 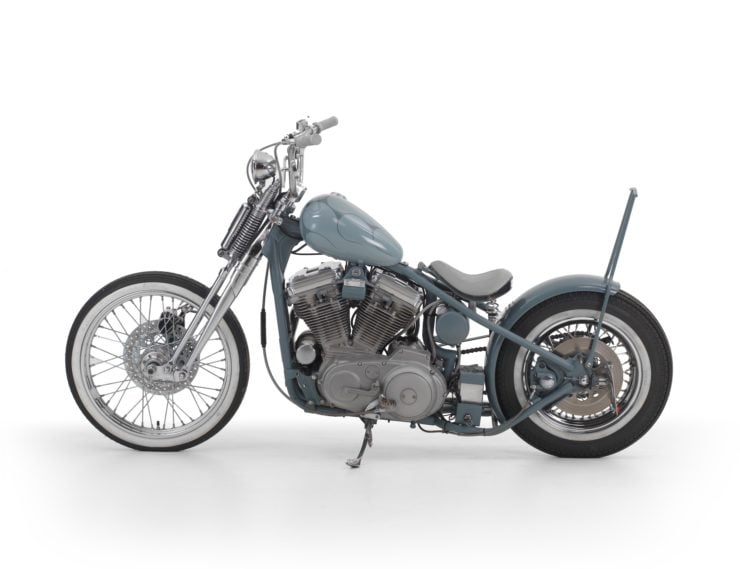 The build of the Chopper BL3 called, ”Fifty Shades Of Grey”. It was built from a Harley-Davidson Sportster XL 883 – A 1992 model.

• The frame is changed from a swing arm to a rigid frame.

• Powder coated with a blue grey matt finish on the frame and other smaller parts.

• Hand built sissybar that have been clear coated to go with the tank and mudguard, triple is always a good figure to work with in a design.

• The engine has been glass blasted and coated with a matt layer to keep the matt finish clean from oil and dirt. I also wanted the engine to blend in with the cylinders.

• I have used as much grey rubber hose and steel hose just to get that grey and metall feeling all-around.

• The breder hose is change to two breeder screws to make the carb location a cleaner look.

• I wanted to clean up the top motor mount with relocation of the coil and hide the ignition cables. I also wanted to have the possibility to charge my phone when I ride. Therefore I installed a USB port.

• The foot pegs are from a dirt bike, just to look cool… and the grip is better.

• The lucky bird on the kickstand always sits on my builds to bring you luck when you ride.

• All the electric goes into the battery. There is also the ignition located with an m-unit doing the job.

• The saddle is handmade by Anton Sandqvist, an old friend of mine. I also made a layer under the saddle from birch wood, stained with a grey shade, of course.

• The springer fork is taken from a Harley softail springer.

• The handlebar is handmade and copied from an a BMX handlebar. Needed to scaled it up a little bit to make it fit a motorcycle. Of course it needed to get an authentic BMX roll….in grey.

• The indicators are Kellerman with a indicator-brake-rear light combination.

• The gas tank was bought in a flee market and was welded/changed to fit the frame. The paint job is homemade.

• The exhaust is a 2-1 system from Paughco. The end tip is turned in aluminium. 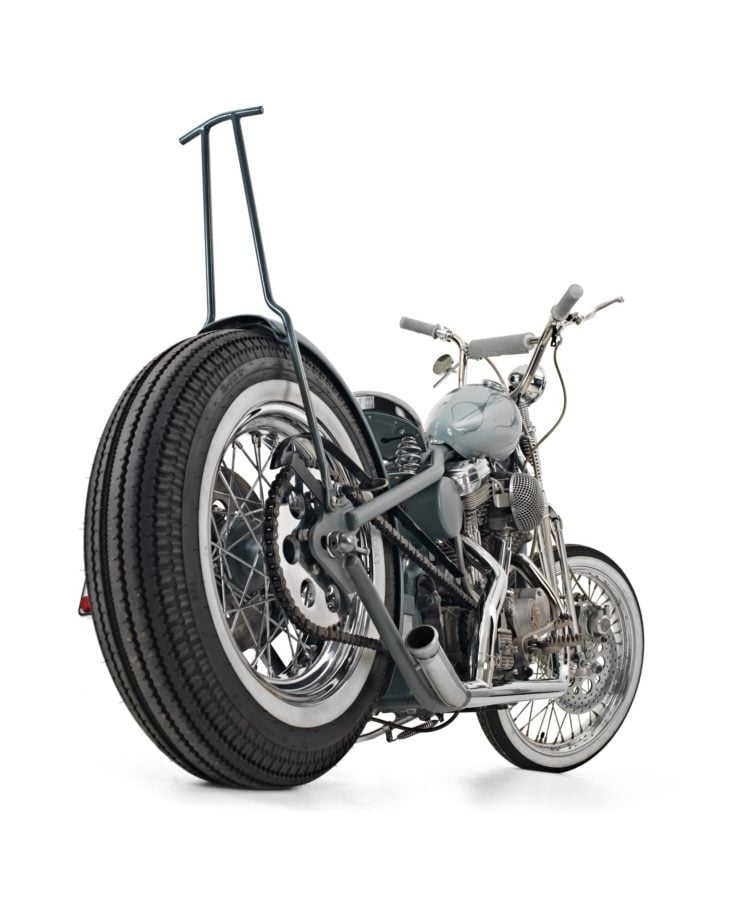 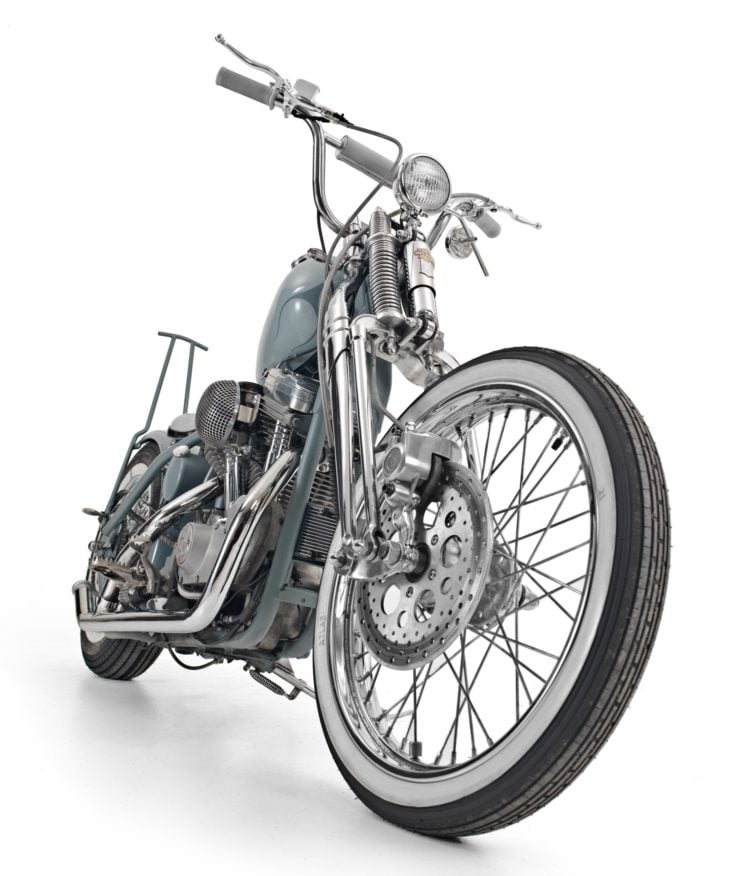 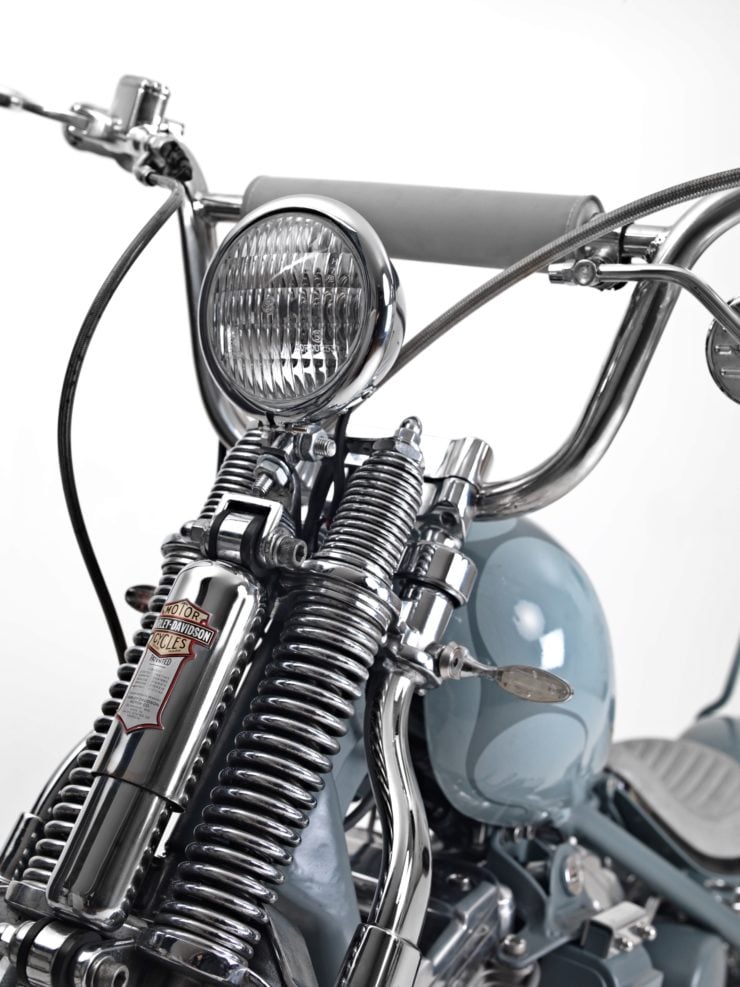 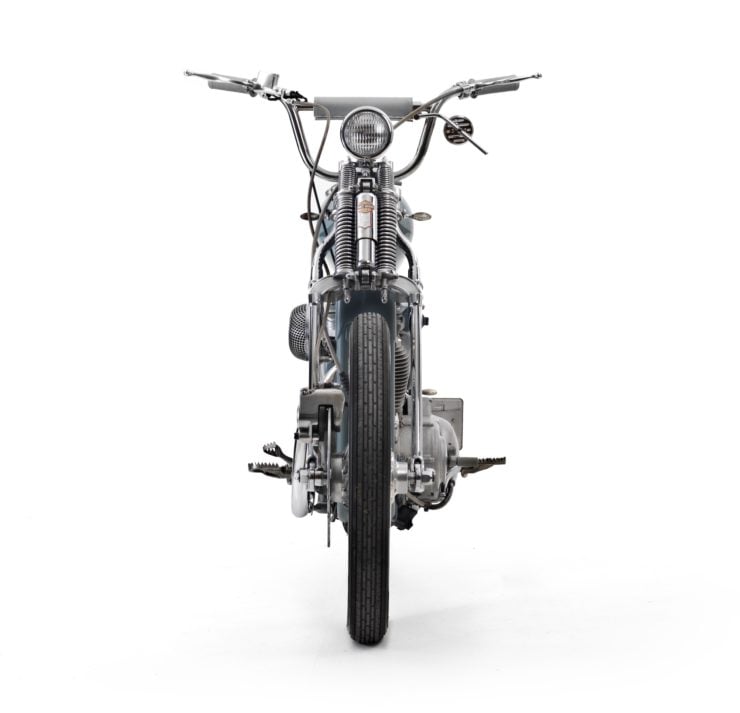 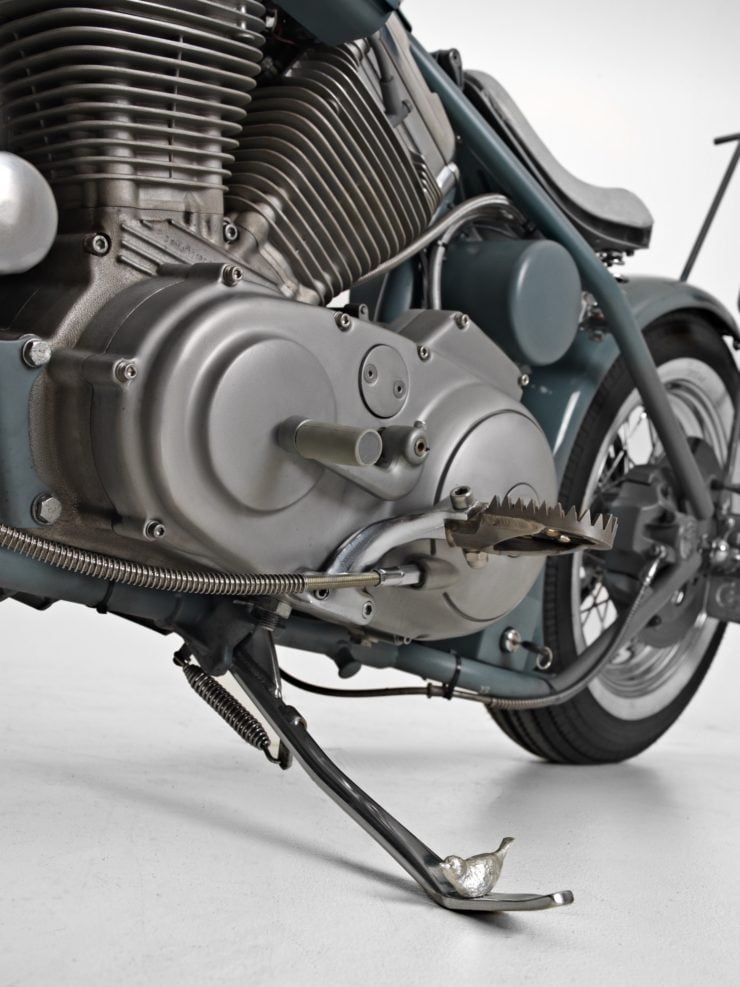 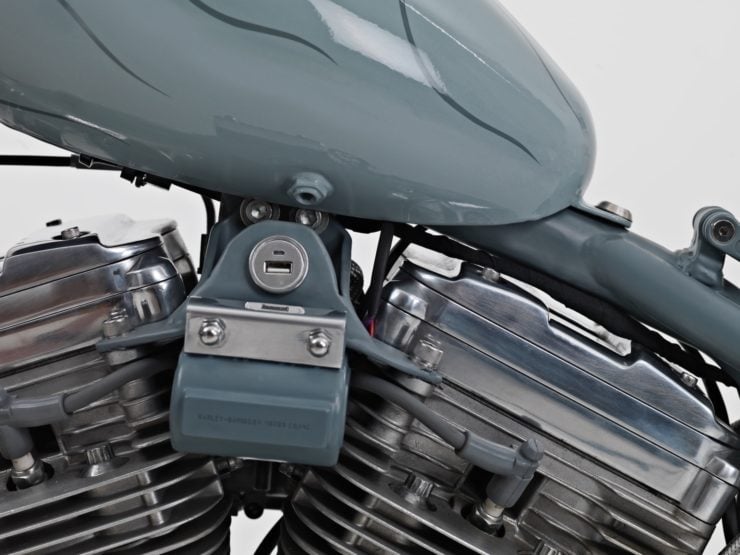 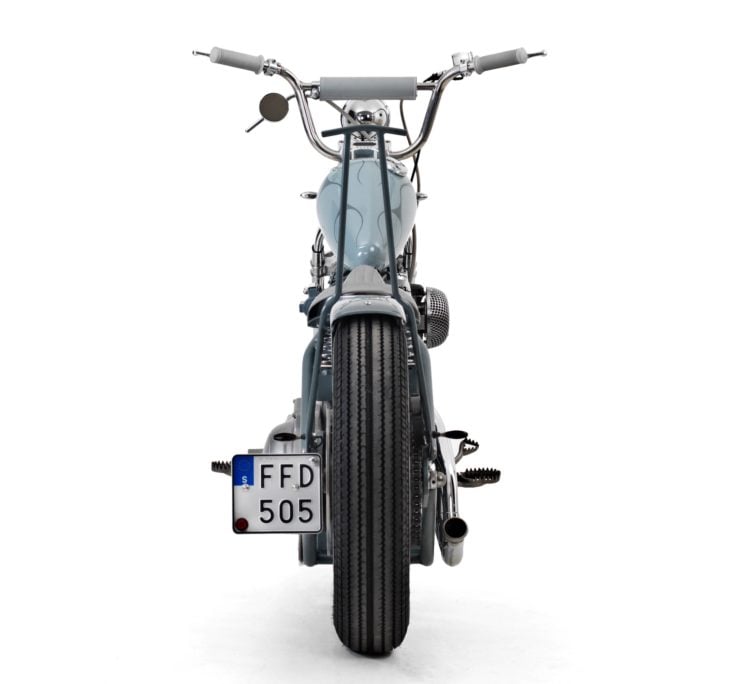 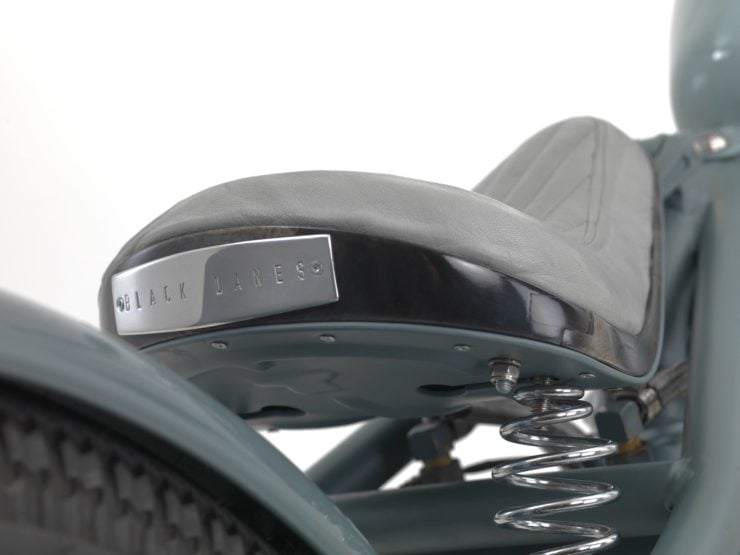