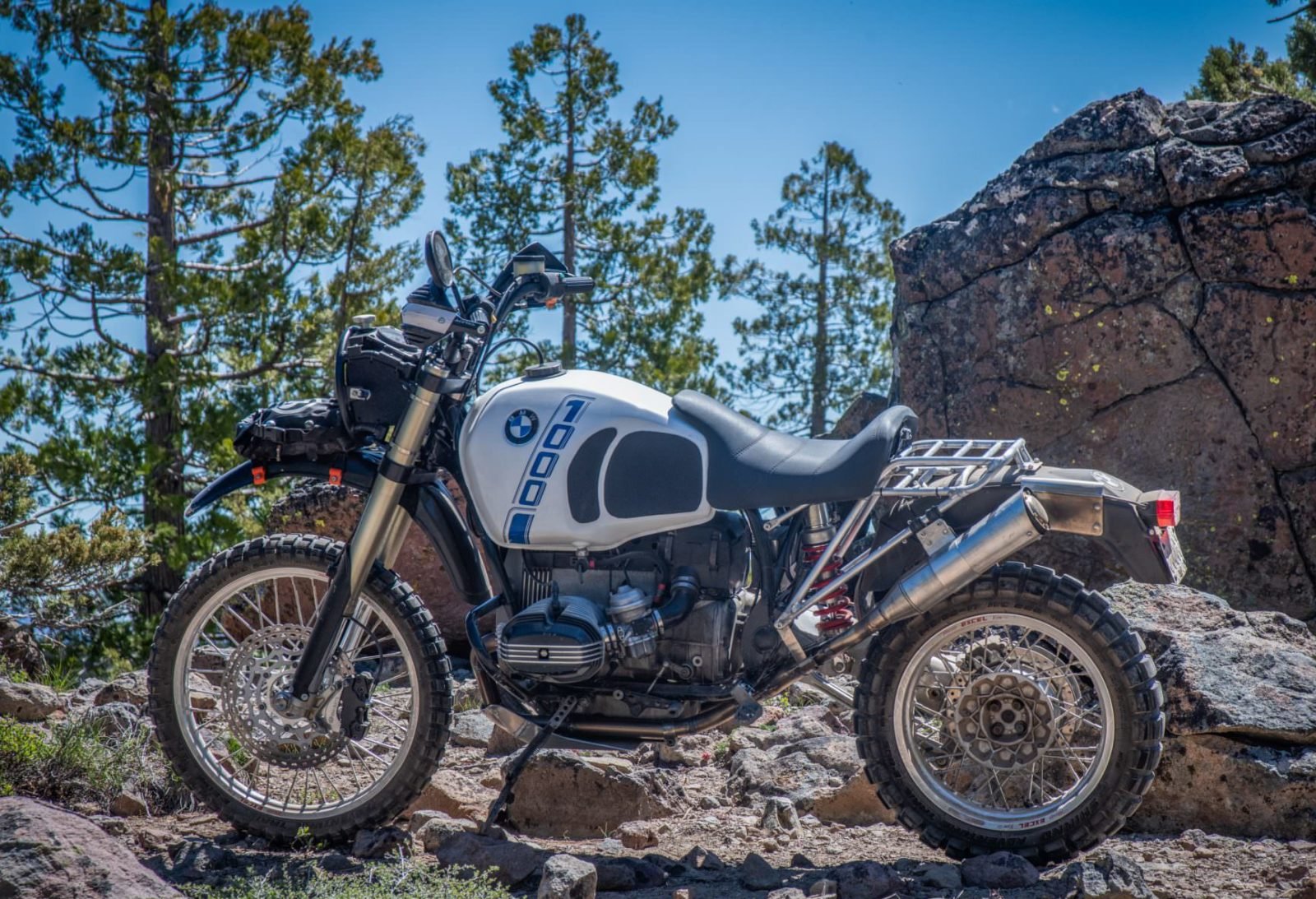 This BMW R100GS benefits from a slew of major upgrades including all new front and rear suspension and brakes, but it keeps the mechanical and electrical simplicity of the original – making it ideal for use in countries were they fix engines with hammers rather than laptops.

The R100GS was released in 1987 as the replacement for the iconic Paris Dakar Rally winning BMW R80G/S, the motorcycle that founded the adventure bike genre – now the fastest growing market segment in the motorcycle world.

BMW started racing modified versions of their boxer twins off-road since at least 1970 when Helmut Scheer entered the grueling International Six Days Trial in Scotland on his modified BMW R75/5. 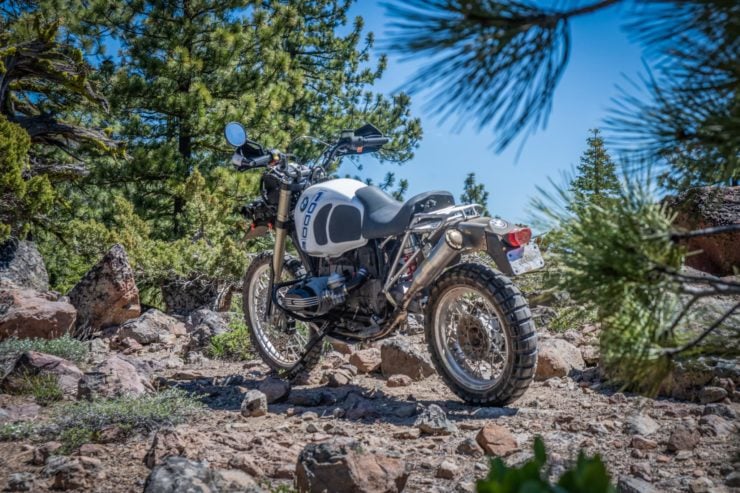 This is the third such build completed by Judd Blunk, it turns the R100GS into a more capable off-road tourer with improved suspension and braking.

Scheer surprised many by winning silver medal in the event, no mean feat, and just a year later Herbert Schek won a gold in the same event – repeating his success with another gold medal in 1973.

Though no one knew it at the time, these successes had set the stage for a new kind of motorcycle that would revolutionize the world of dual sport motorcycles forever – the adventure bike.

The first running of the Paris Dakar Rally took place in 1979, it was a brutal international event that departed from Paris and traversed Southern Europe before crossing the Mediterranean and entering the wilds of North Africa.

Once in Africa the race crossed the Sahara, finally terminating thousands of miles later in Dakar on the west coast of the continent, the capital city of Senegal.

The 1979 and 1980 runnings of the Paris Dakar Rally were won by the Yamaha XT500. A motorcycle that was essentially a big single-cylinder trail bike. In 1981 things changed with the arrival of a new motorcycle called the BMW R80G/S, it was a larger 800cc boxer twin and it surprised many by winning the rally. 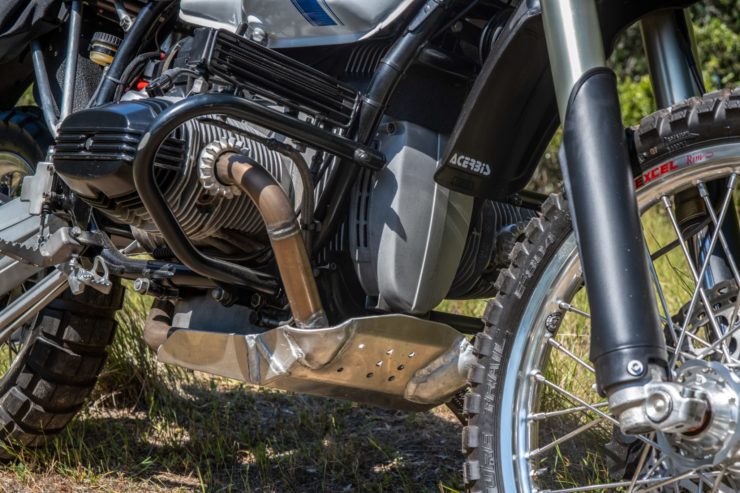 The R100GS is powered by the famously reliable BMW boxer twin, sometimes called the “Airhead” as both the cylinders and heads are out in the clear airflow.

the BMW R80G/S would win again in 1983, 1984, and 1985. By this time other manufacturers had developed their own large-capacity adventure bikes, future Paris Dakar Rallies would be won by the likes of the Honda Africa Twin, Cagiva Elefant, and Yamaha Téneré – the age of the adventure bike had begun.

As the 1980s had progressed BMW market research was showing that people were using their adventure bikes approximately 98% on road, and 2% off-road. With this in mind they developed their new model to more road-oriented while still being more than capable off the asphalt.

The BMW R100GS was slightly larger than the R80G/S, with a larger 980cc boxer twin, and a new Paralever rear end to replace the earlier Monolever design that had been criticized for jacking up under heavy acceleration.

The R100GS was essentially more inline with what we consider to be a modern adventure bike and it proved to be a huge success for BMW – they sold over 34,000 of them between 1987 and 1996. 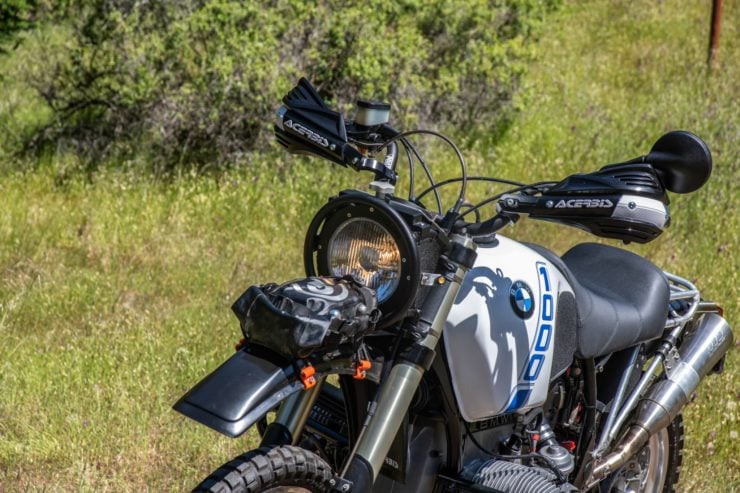 For off-road riding the bike is now fitted with Acerbis brush guards and an Acerbis front mud guard, and it has a much brighter Cyclops rally headlight.

With the prices of good examples of the R80G/S now reaching stratospheric heights, the R100GS is becoming more popular with modern adventure bike riders who are seeking some old school charm and a little more simplicity – the model has no traction control, no ride modes, no ABS, and most certainly no ride-by-wire throttle.

The BMW R100GS you see here benefits from a comprehensive rebuild by Judd Blunk of Blunk’s Garage, based in Marin County just north of San Francisco in California.

Judd retired a few years ago after spending almost 30 years working for Porsche Cars North America. He’s now become a highly-respected custom motorcycle builder, and a specialist when it comes to making older BMW adventure bikes even better than they were originally.

Motorcycle suspension technology has come a long way in the almost 40 years that have passed since the R100GS was introduced. As a result one of the first changes Judd makes to the bikes he’s rebuilding is to change the front and rear suspension out completely. 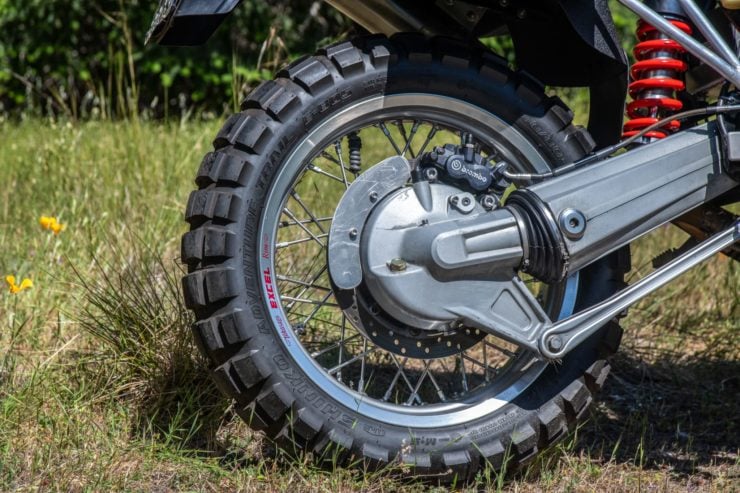 The rear end was sourced from a 1995 BMW R1100GS and it’s been paired with a fully adjustable monoshock. This gives the bike more modern suspension geometry and a rear disc brake in place of the original drum.

The bike you see here is now fitted with a leading-axle open-chamber inverted WP 48/60 fork with approximately 9″ of travel, it’s fitted courtesy of a pair of custom CNC triple clamps.

The rear end has been completely transplanted with the Paralever from a 1995 BMW R1100GS with a fully adjustable monoshock – this has the added benefit of switching the original rear drum for a rear hydraulic disc.

Judd made a new aluminum rear subframe from 6061 schedule 40 pipe, and added extra attachment points to reinforce the tension members so you can carry plenty of gear when needed. He then modified an old original GS adventure fuel tank to fit, added a set of ProTaper adventure high bars, and a Cyclops rally headlight.

The engine now benefits from a top end rebuild with headwork by Engine Dynamics in Petaluma, and the electrics have been further simplified with the help of a Moto Gadget M unit.

This is the third R100GS in this style that Judd has built, the completed machine weighs in at less than 400 lbs, making it at least 56 lbs lighter than the bike it started out as.

If you like the look of it then I have good news, at the time of writing it’s being auctioned live on Bring A Trailer, and it has just 433 miles on the odometer since it was completed. If you’d like to read more about it or register to bid you can visit the listing here. 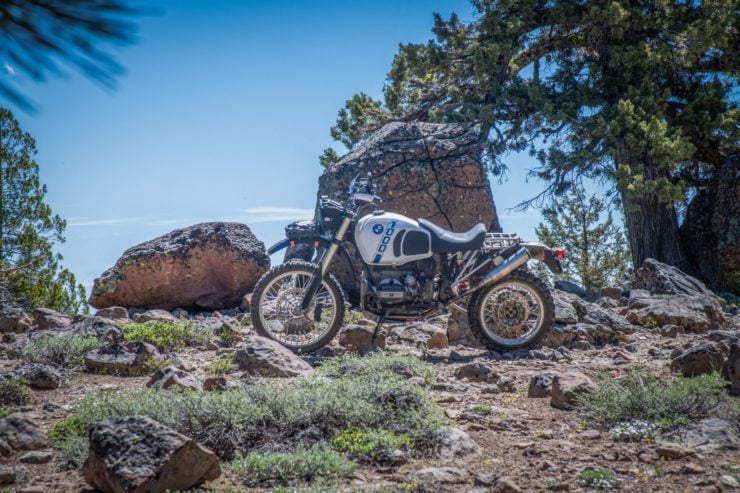 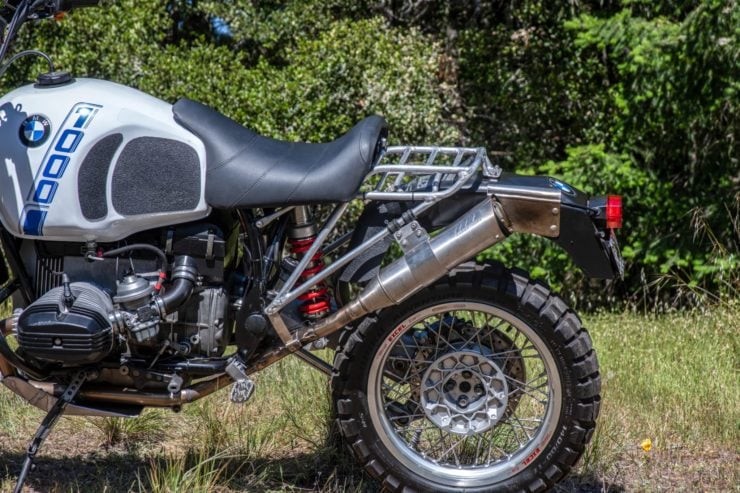 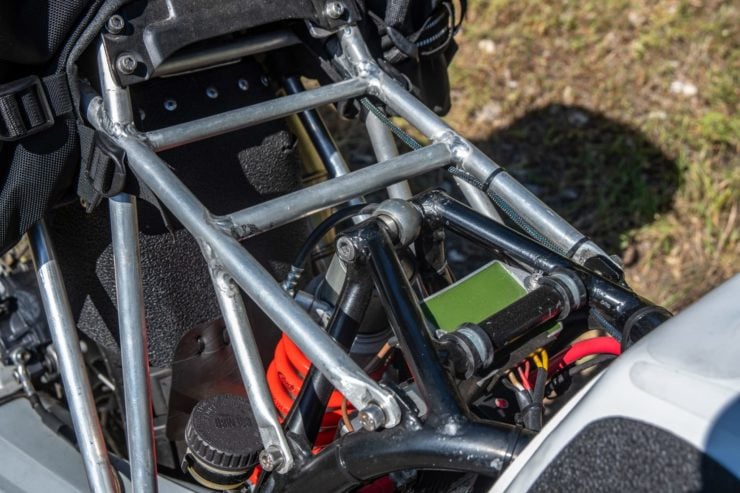 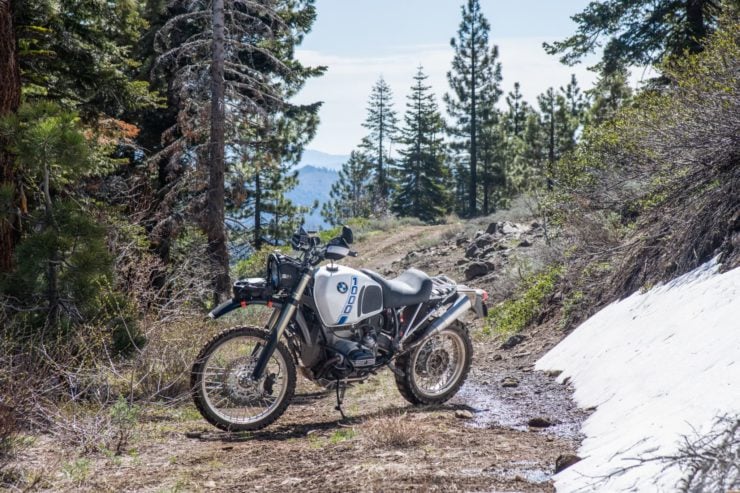 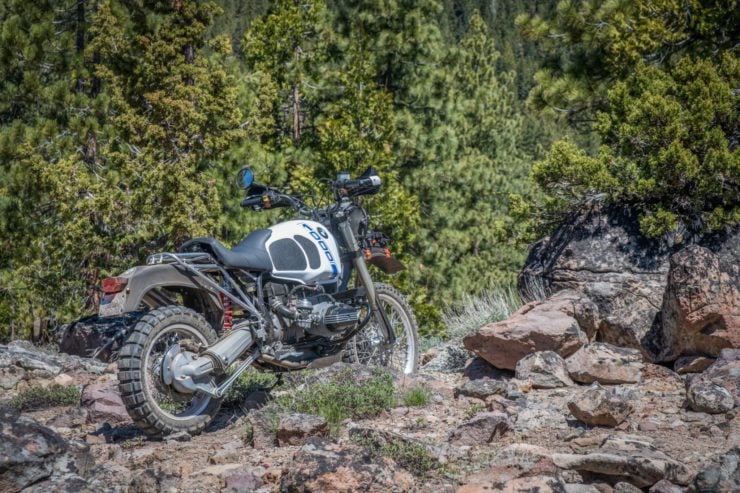 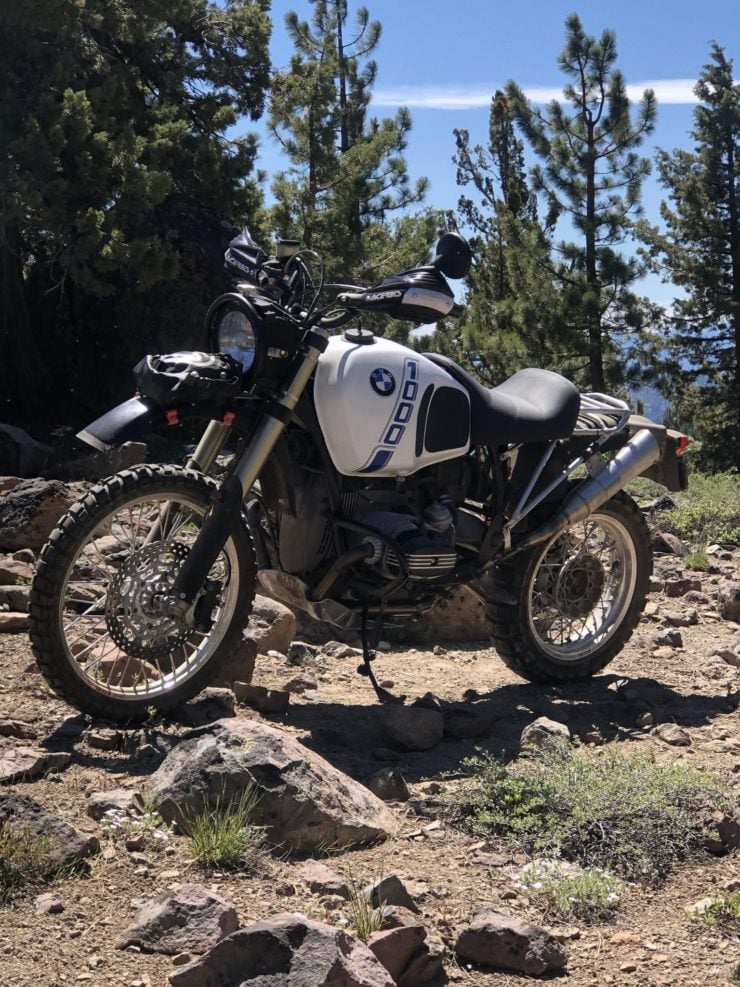 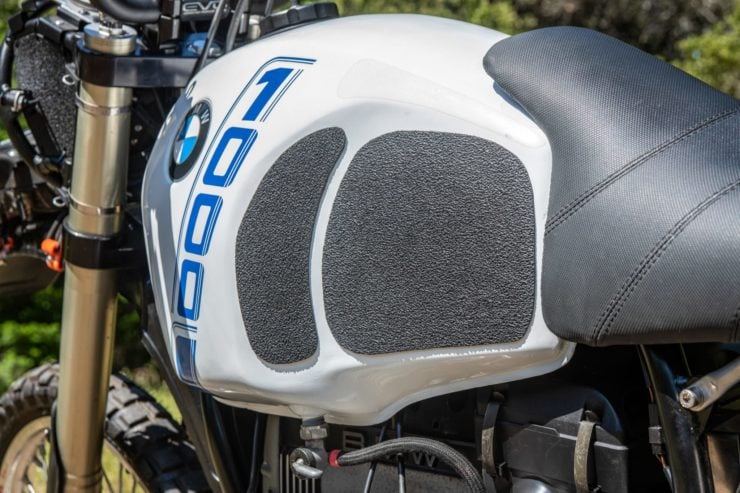 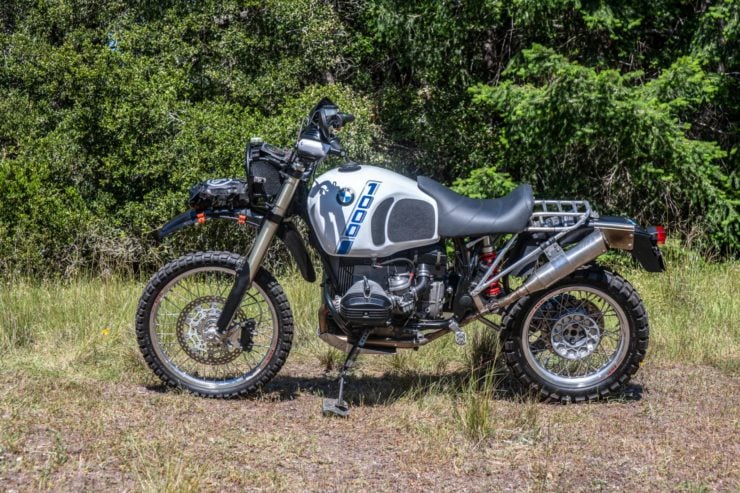 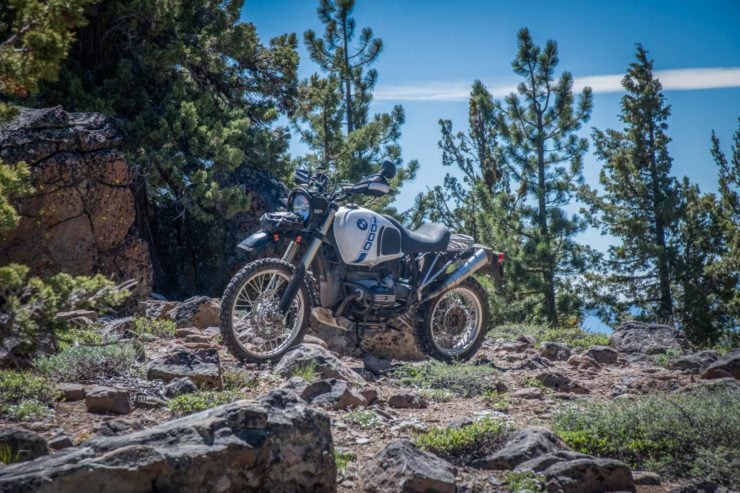 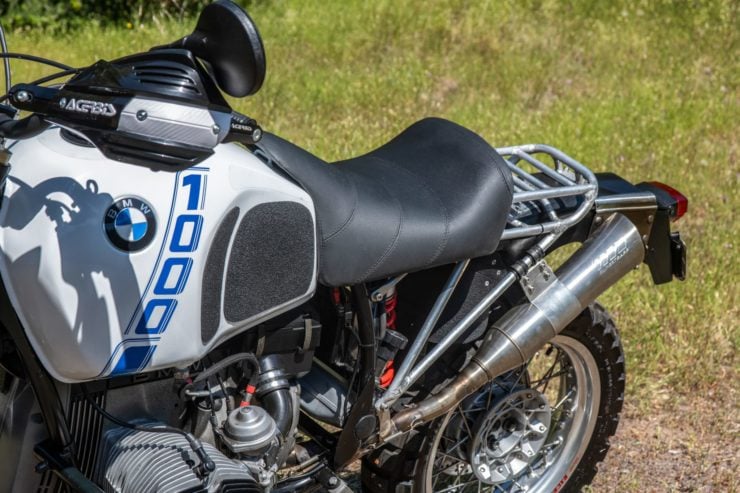 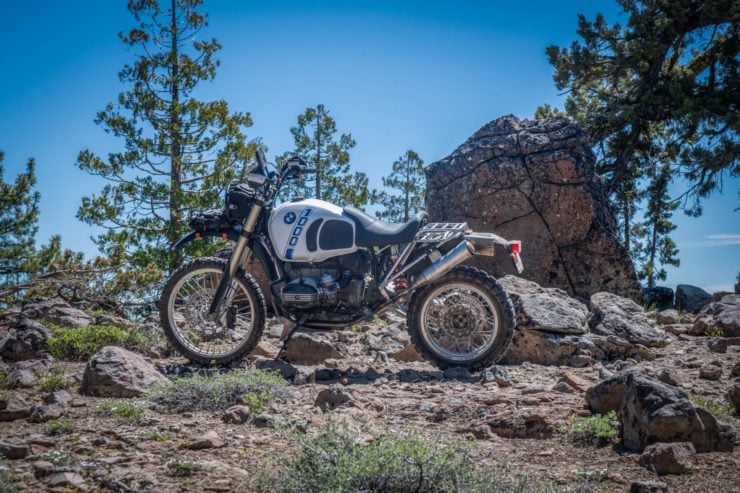