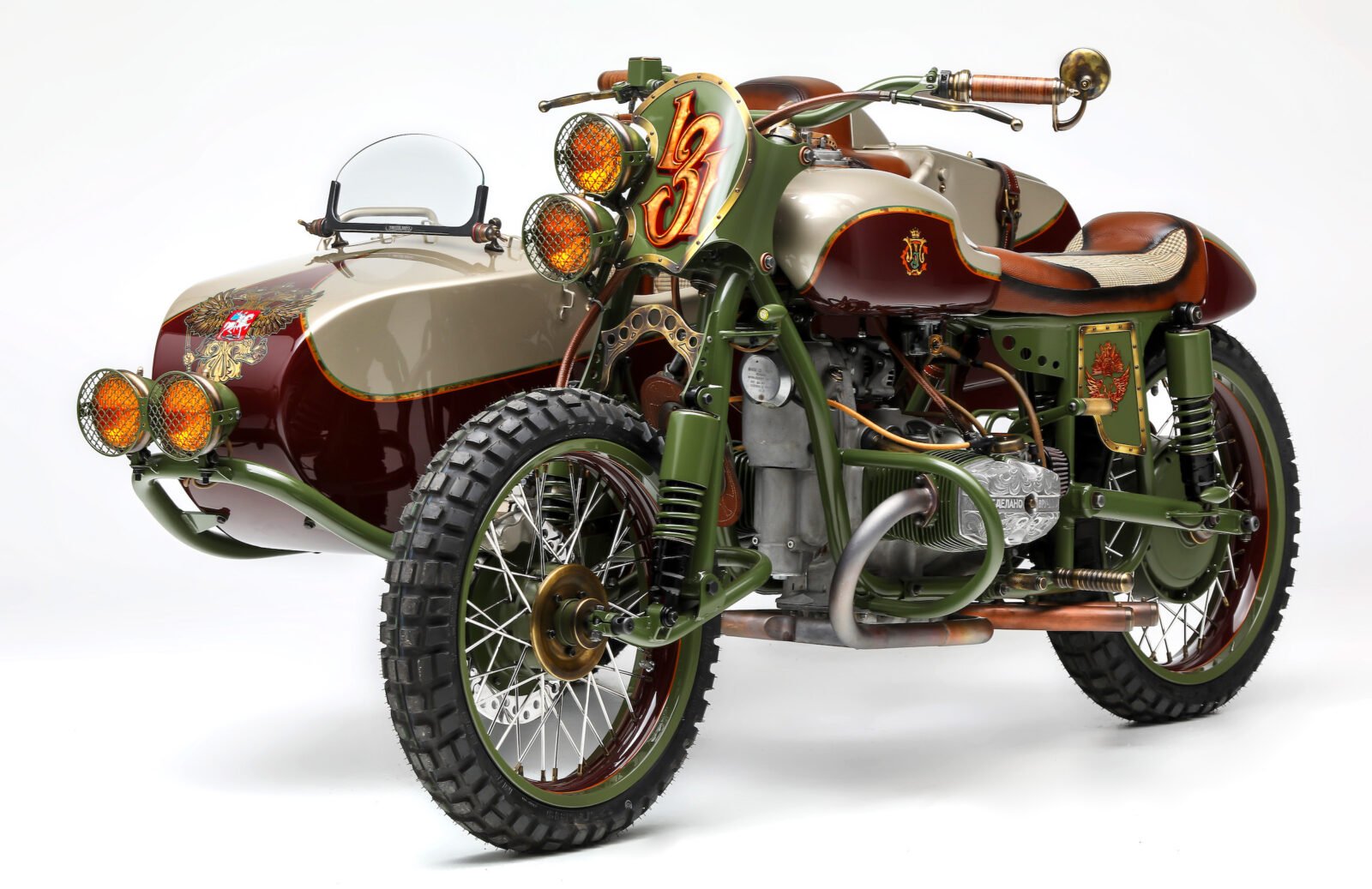 This custom 2WD Ural was built by the team Le Mani Moto, they called it “From Russia With Love” as a reference to the James Bond film of the same name starring Sean Connery.

Ural is undoubtably the best known of the Russian motorcycle manufacturers, the company is based in the town of Irbit in the Ural Mountains, and it’s made a name for itself building the most famous sidecar motorcycles in the world.

The Ural started out as a licensed Russian copy of the venerable BMW R71, it was licensed to the Soviet Union in 1940 when Nazi Germany was still an ally.

As the war progressed and Hitler went to war with the Soviets the IMZ-Ural factory was moved from Moscow to Irbit in the Ural Mountains to provide it with some strategic geographical security.

In the intervening decades the Ural has been comprehensively redesigned and now shares no parts with the original BMW design, they’ve been considerably upgraded to include Brembo brakes, fuel injection, LED headlights, adjustable Sachs shock absorbers, aluminum rims, an electric starter, a modern Denso alternator, IMZ leading link forks, and all modern materials, paints, and coatings.

“The “131” racing number refers to my daughter’s birthday of January 31st, and is on all of my personal collection. My wife and daughter’s monograms are hand-painted and leafed on the fuel tank and trunk lid of the sidecar by Bert Graphix.” – Gary Capone / Le Mani Moto 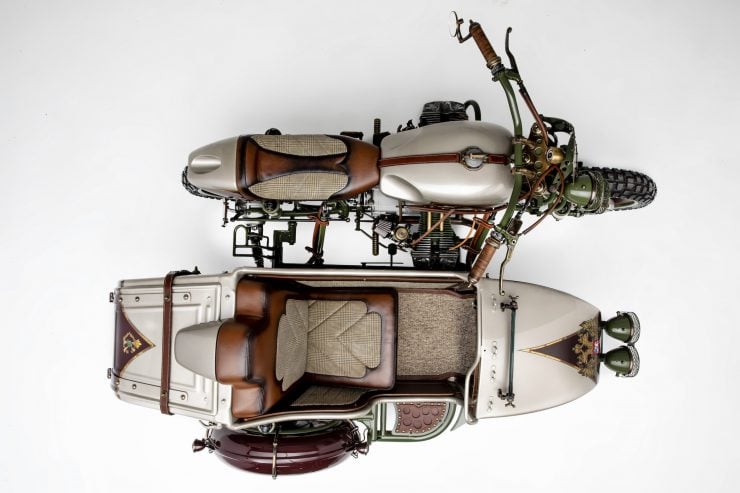 When Gary Capone and Scott Avery of Le Mani Moto bought a 2006 Ural 2WD they began a full teardown, all parts were inspected and the stock airbox, exhaust, as well as many frame tabs and brackets were removed. They completely redesigned the sidecar suspension and fender allowing the tailored low profile look as the fender now moves with the tire and swing arm rather than needing travel clearance between the fender and tire.

The tail section was custom fabricated with a recessed tunnel for the tail light, a custom seat pan, a custom “speed scoop” mounted to the trunk of the sidecar (a nod to vintage sprint car designs), along with the new contoured seat back head rest to butt up to it.

Custom front inner shock tabs were installed to put the proper line back in the IMZ leading link front fork were added along with a Le Mani Moto proprietary front leather mud guard (fitted to all of their builds). 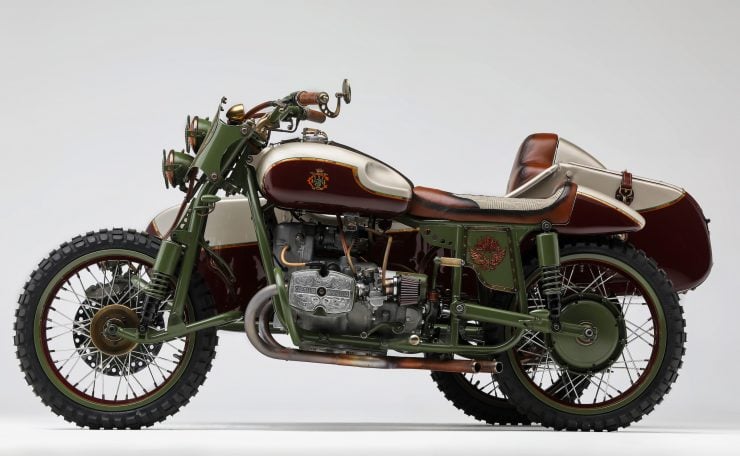 “We wanted to showcase our brand’s vintage thematically consistent aesthetic and design cues on a completely foreign motorcycle… I often refer to the inspiration of James Bond, Steve McQueen, and Ralph Lauren getting together and spawning this bike. Its name “From Russia With Love” refers to it’s heritage, with the Russian Coat of Arms hand-leafed and painted on the nose of the sidecar as well as it’s cyrillic “Made By Hand” engravings on the valve covers and Saint Basil’s Cathedral onion domes carved by Heather New of New Line Engraving in Canada.”

“My background in the interior design biz is always knitted into every detail, such as the color combinations, fit, and finishes, material selections, etc. The bike’s are completely designed and details are curated before we turn the first wrench. Paint schemes, leather and textile selections, metal patina finishes, etc. Exactly the same methods as developing an interior design project.” – Gary Capone / Le Mani Moto

The completed bike is entirely unique and not quite like anything we’ve featured previously, if you’d like to see some of Le Mani Moto’s previous work you can visit their website here. 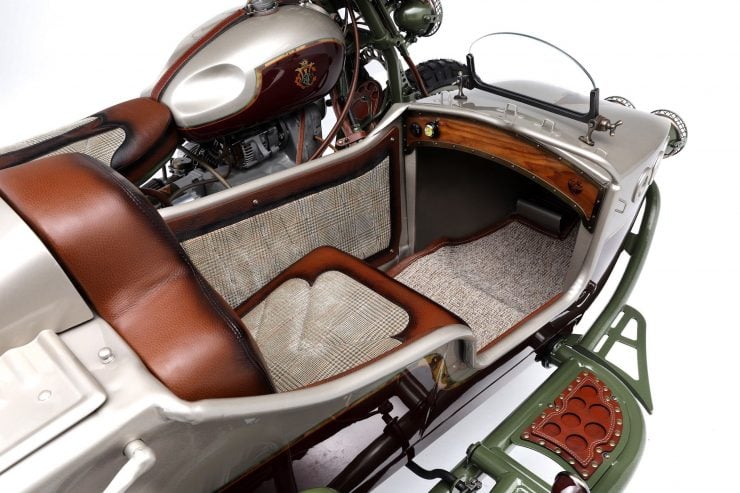 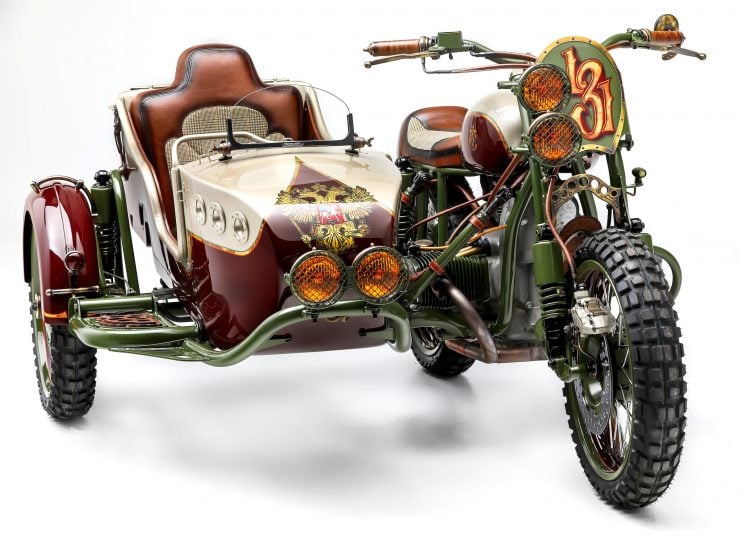 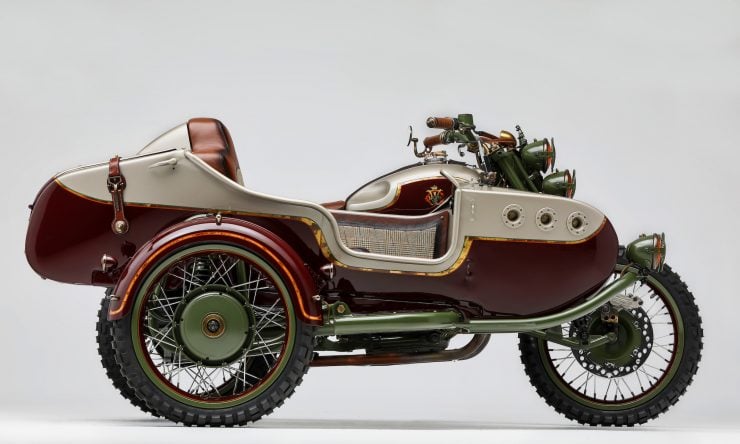 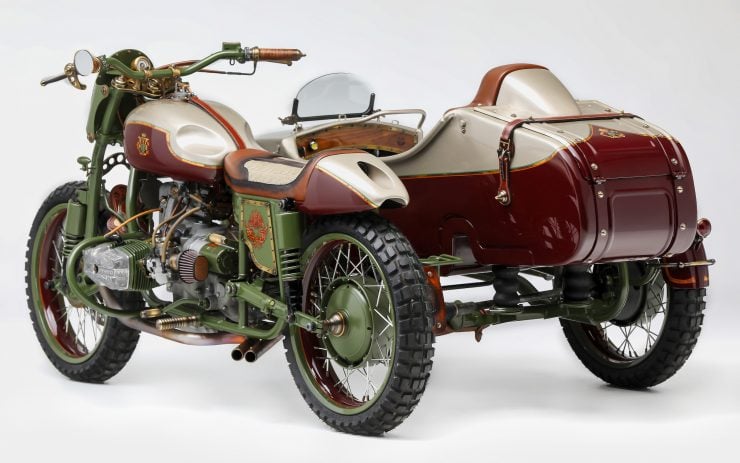 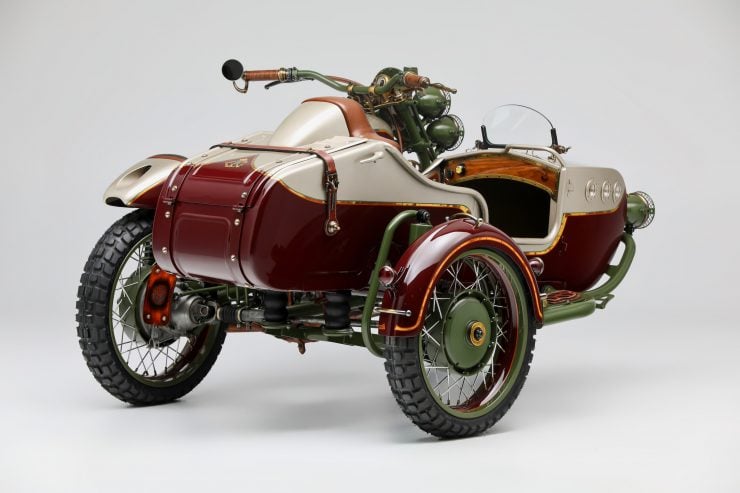 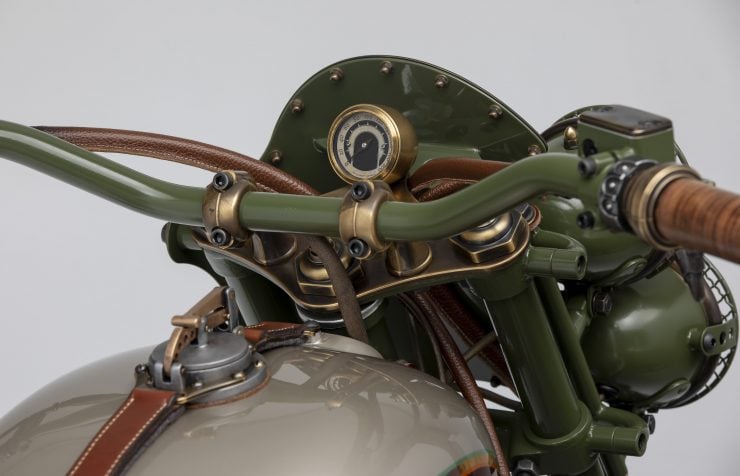 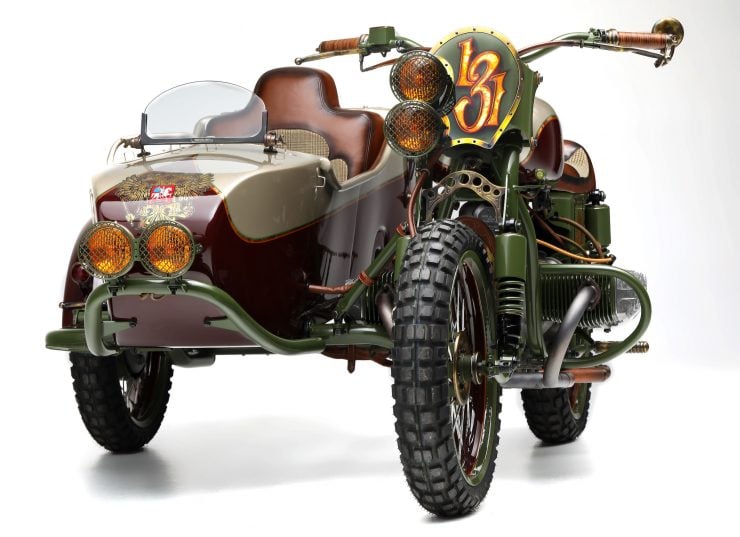 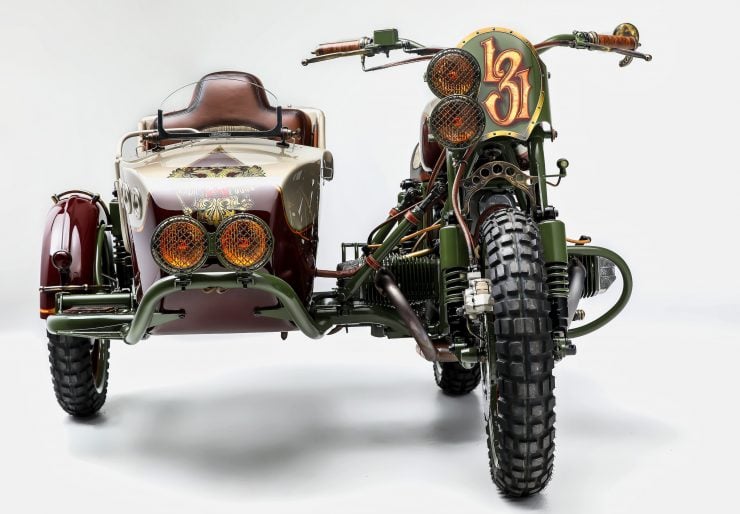 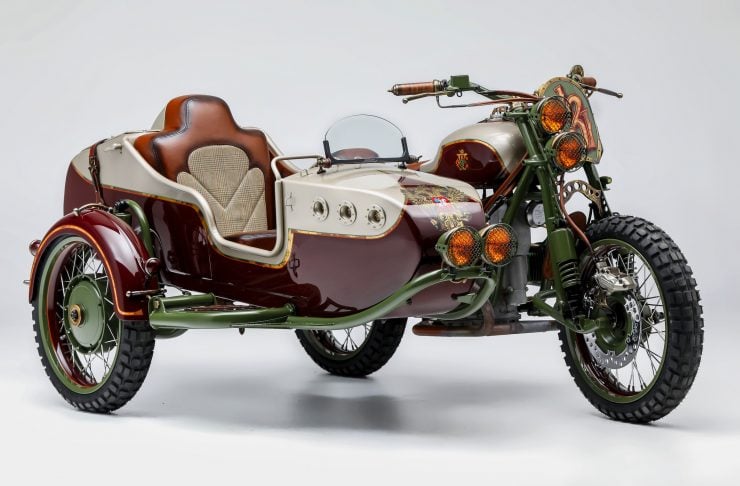 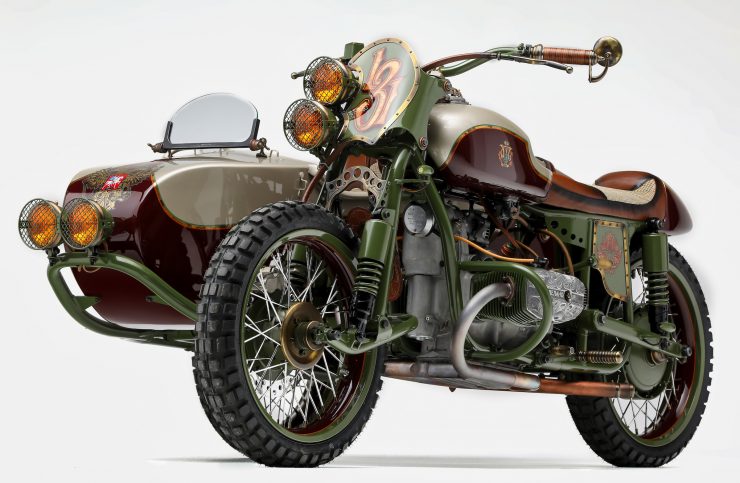 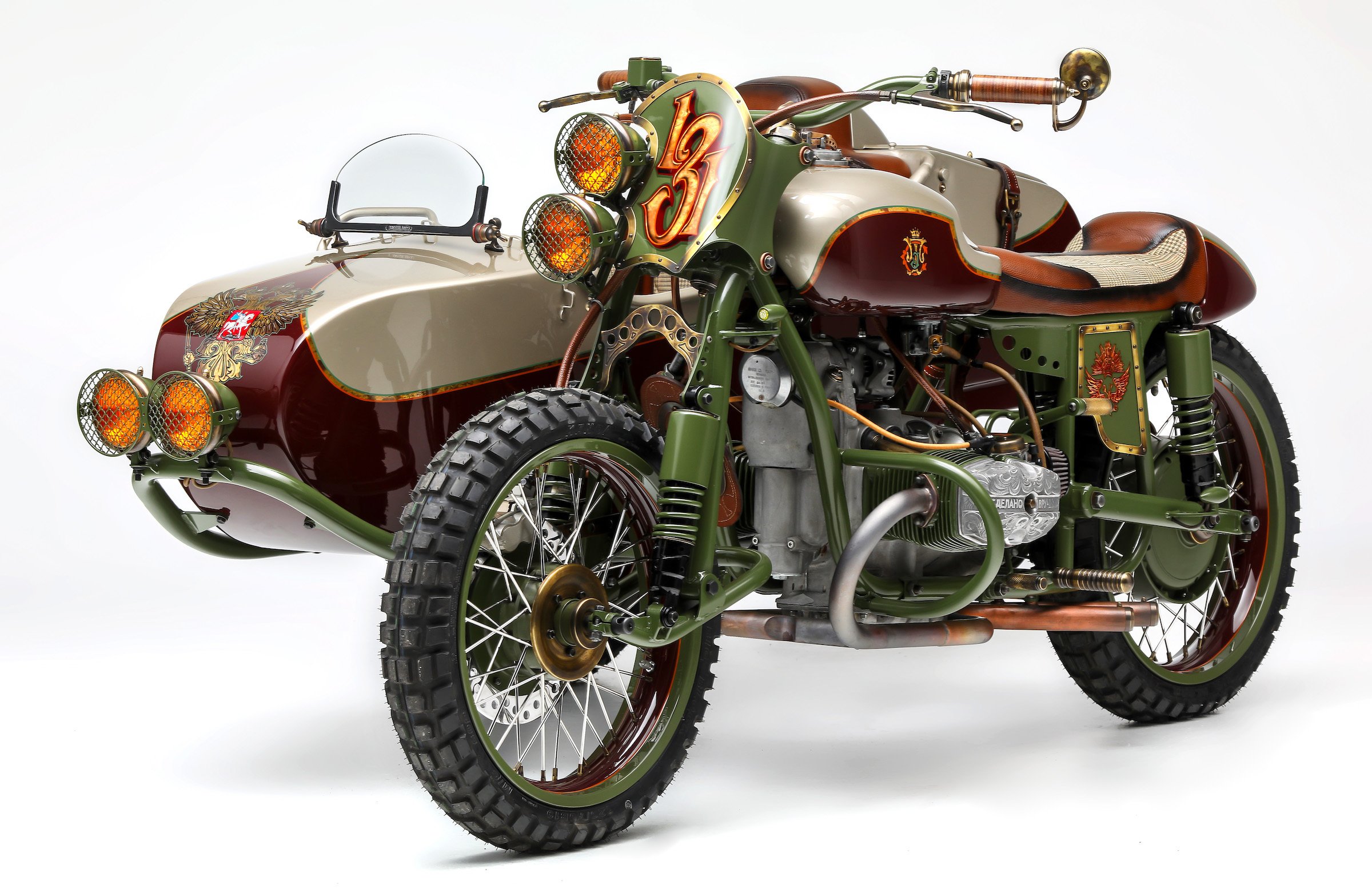