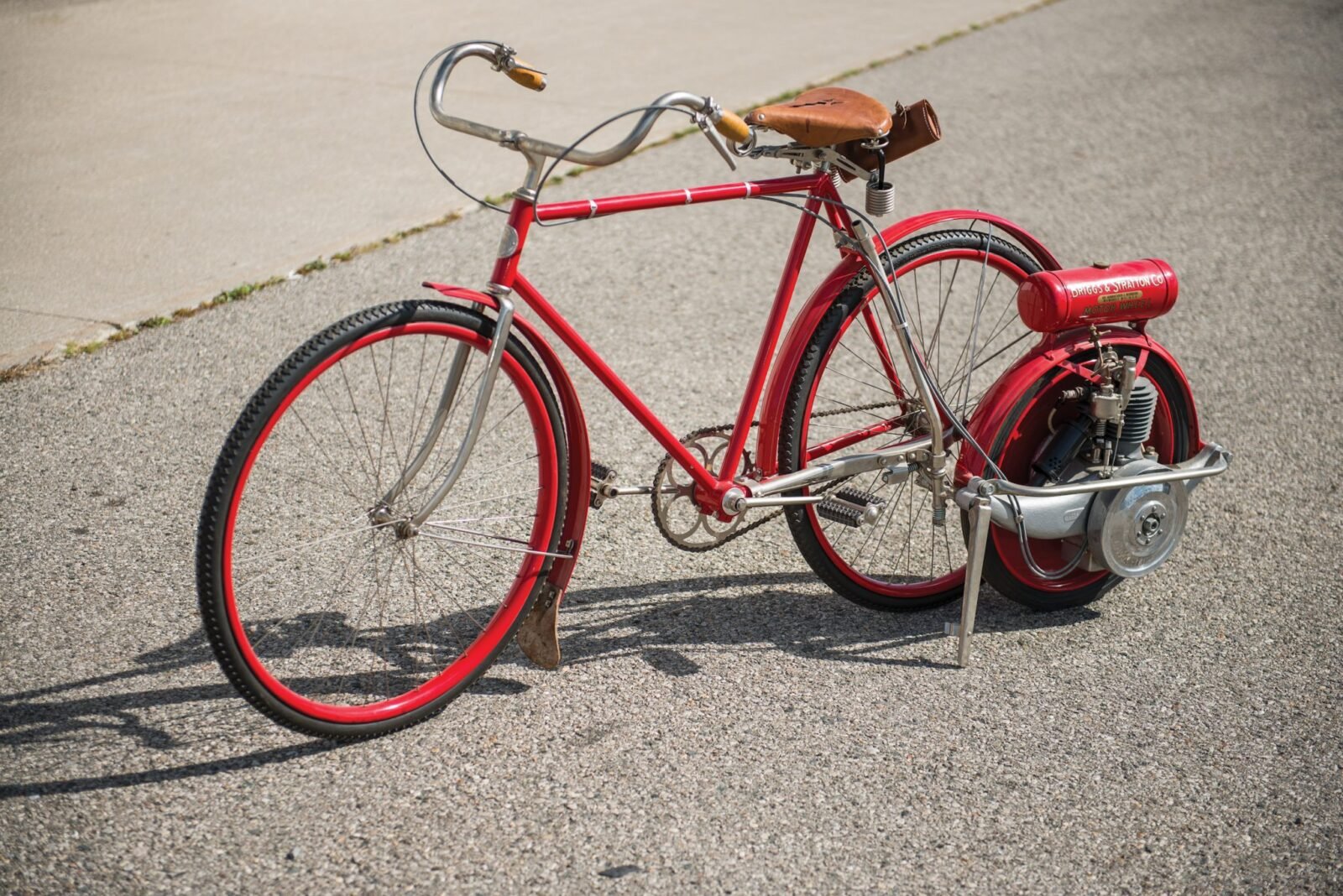 The Briggs & Stratton Motor Wheel was the first motorized vehicle ever owned by many tens of thousands of Americans, many were attached to bicycles and some were fitted to the rear of the Briggs & Stratton Flyer Cyclecar – remembered now as the cheapest car in history.

A Brief History of the Briggs & Stratton Motor Wheel

The Motor Wheel concept was penned in Birmingham, England by Arthur William Wall in 1910. The clever design utilised an air-cooled single cylinder motor mounted to a concave wheel, with a belt drive from the crank to the axle. There were no gears and no clutch, although rudimentary clutch functionality was achieved by lifting the Motor Wheel off the ground when you wanted to stop, then carefully lowering it when you wanted to set off.

In 1914 the A.O. Smith Company in Milwaukee purchased the US manufacturing rights for the motor wheel, and made a few small improvements before beginning production. Initially the motor wheel was paired with a bicycle, giving riders a 25+ mph top speed and a range of 80+ miles per tank. Although these figures may not sound particularly impressive now, they represented a revolution for the 1910s, and along with cars like the Model T and early motorcycles contributed to a fundamental reshaping of America.

Perhaps the greatest of the innovations of the Smith company was the creation of the wood-framed cyclecar they called the “Smith Flyer Buckboard”. Its simple wooden slat frame doubled as rudimentary suspension, and heavy passengers would create a noticeable bend in the centre. The motor wheel was mounted at the rear, and could be elevated or lowered via a lever fitted in the centre of the cyclecar, to the right of the steering wheel.

The Smith Motorwheel provided a first motor car to many Americans who couldn’t afford a Ford Model T, but due to their low cost and wooden construction only very few have survived to the modern day. 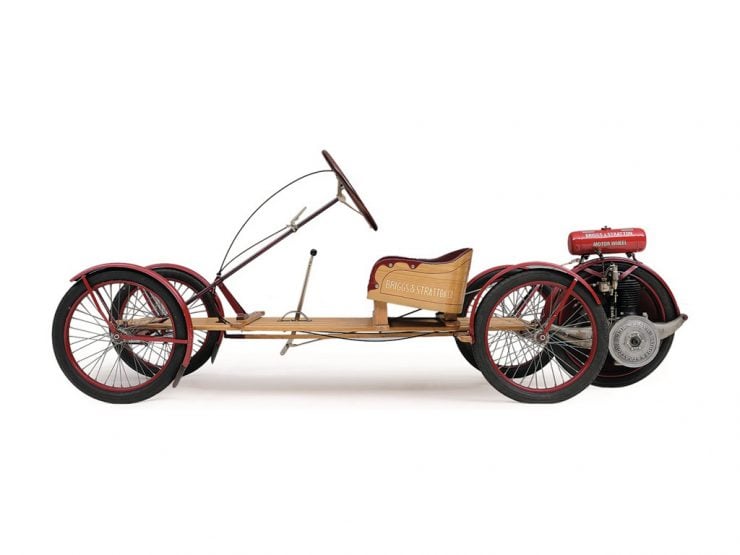 In 1919 the Smith motor wheel designs and patents were purchased by the Briggs & Stratton Company, who modified the design before putting it into production. An increased bore size and stronger internal parts gave the new version double the horsepower of the original – a mighty 2 hp.

The Briggs & Stratton we all know of today was built using this engine as a foundation. It would later power everything from lawn mowers to water pumps and many other things besides, a remarkable feat of longevity for a simple design that started life in 1910.

Briggs & Stratton released their own updated version of the Smith cyclecar, called the “Briggs & Stratton Flyer”, which sold in significant numbers. However most of the Briggs & Stratton Motor Wheels were fitted to bicycles, proving to be a popular early ancestor of the modern electric bicycle.

Very few Briggs & Stratton Motor Wheels have survived the almost 100 years since their manufacture, so complete and functioning examples are now much sought after by collectors.

The bright red National Bicycle you see here is fitted with an original Briggs & Stratton Motor Wheel, fittingly finished in the same color.

Overall the bicycle and engine are in good condition, with a traditional sprung leather seat, a leather tool roll, leather wrapped grips on the handlebars, and a leather mudflap upfront to avoid getting your knickerbockers dirty.

Although not huge, the fuel tank should be good for 80+ miles of travel, should you happen to exceed this you’ll just need to put the motor wheel in its elevated position and pedal like a commoner.

RM Sotheby’s will be auctioning this survivor at the Hershey Sale due to be held between the 5th and 6th of October. The estimated value is between $4,000 and $6,000 USD, which is actually pretty attractive given the rarity and historical significance of the power unit. If you’d like to read more about it or register to bid you can click here to visit the listing. 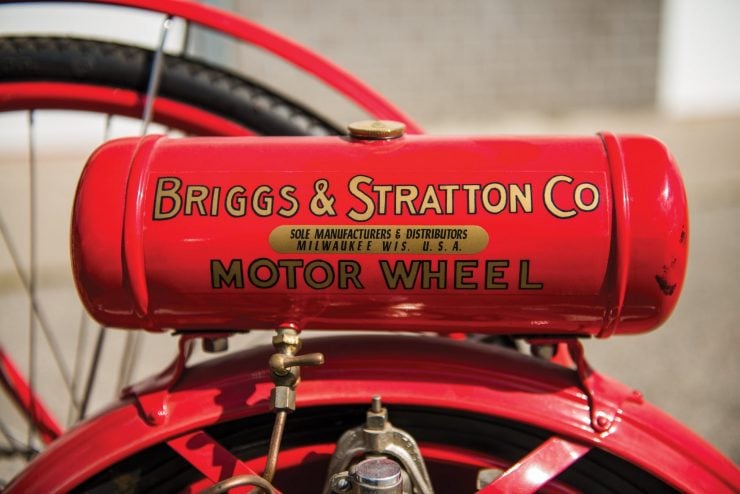 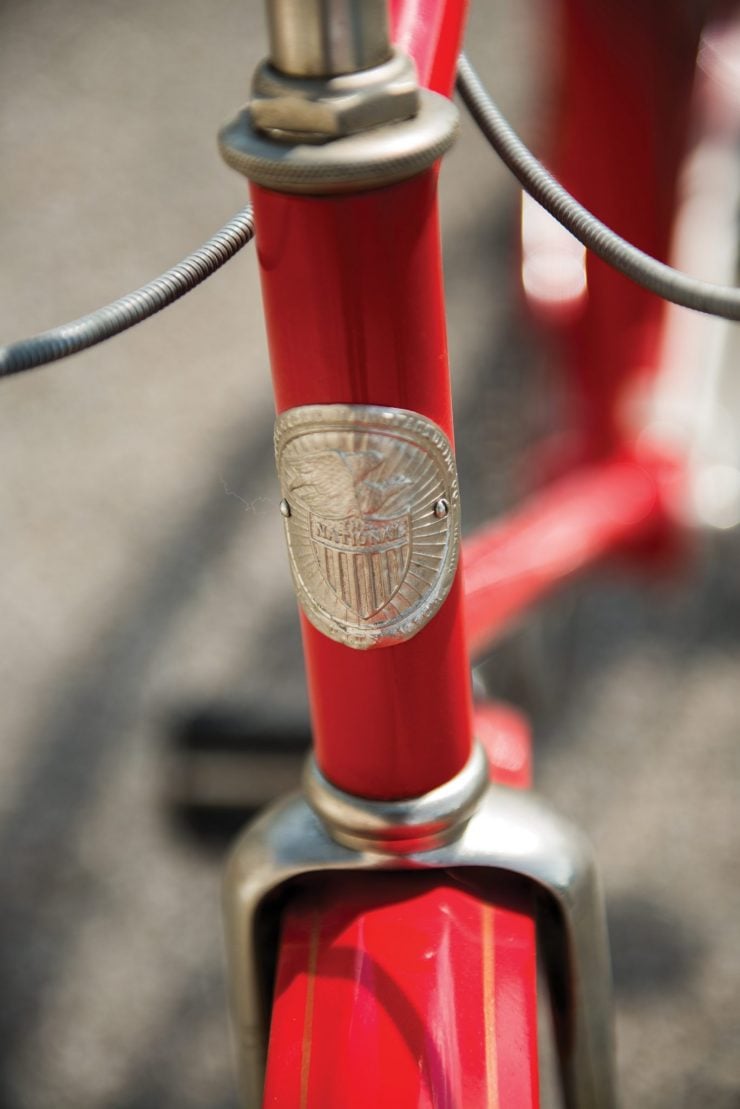 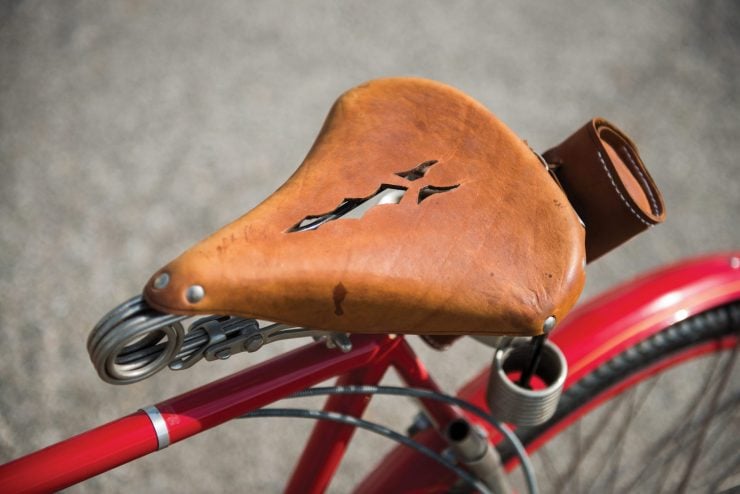 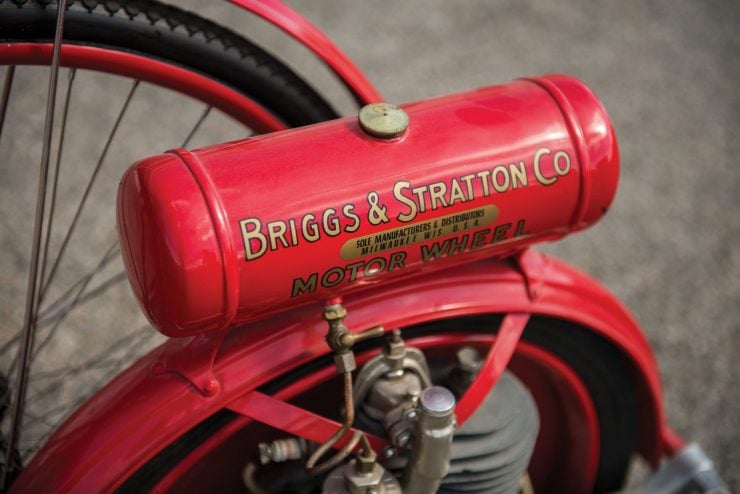 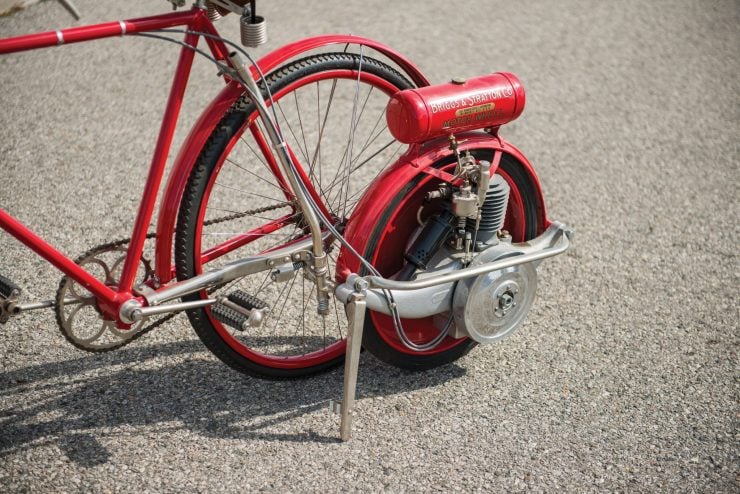 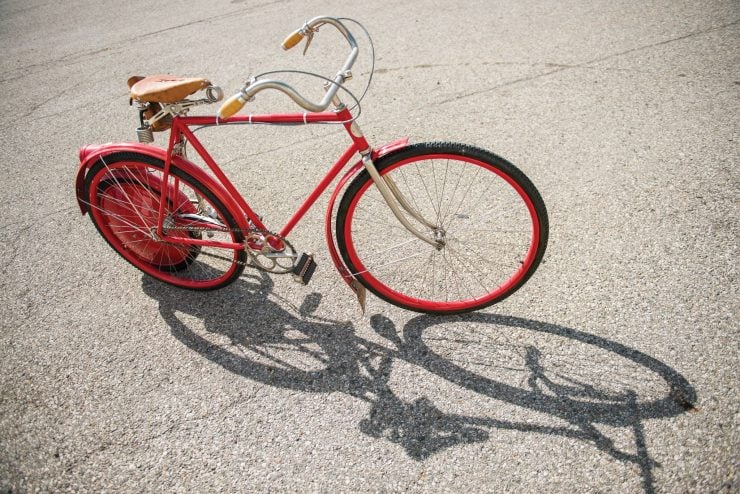 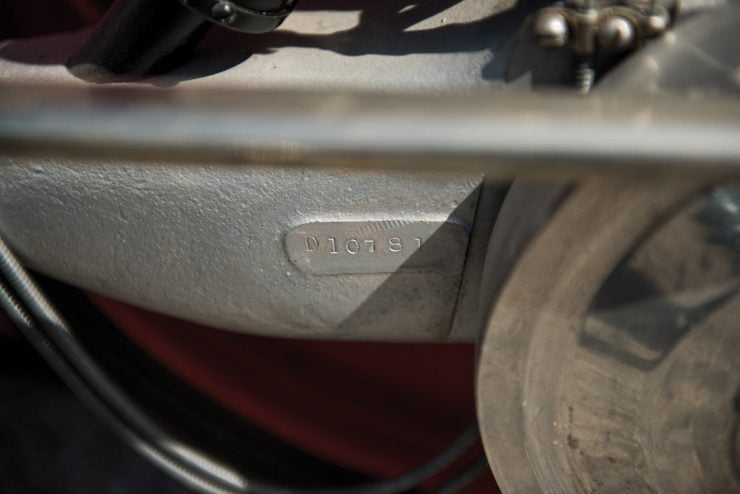 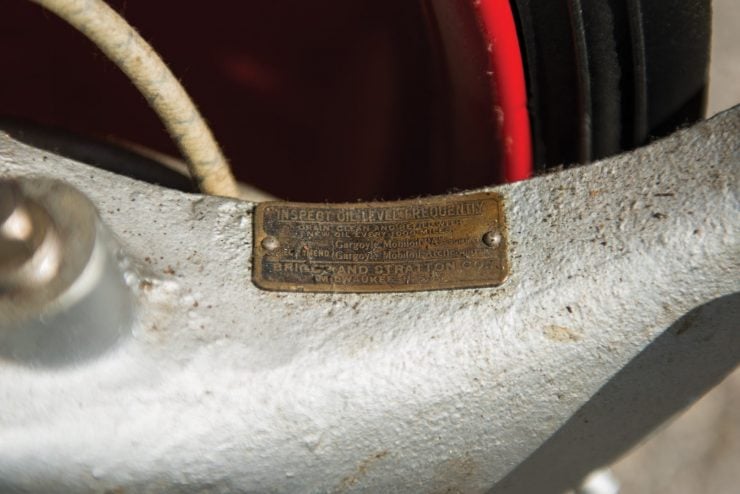 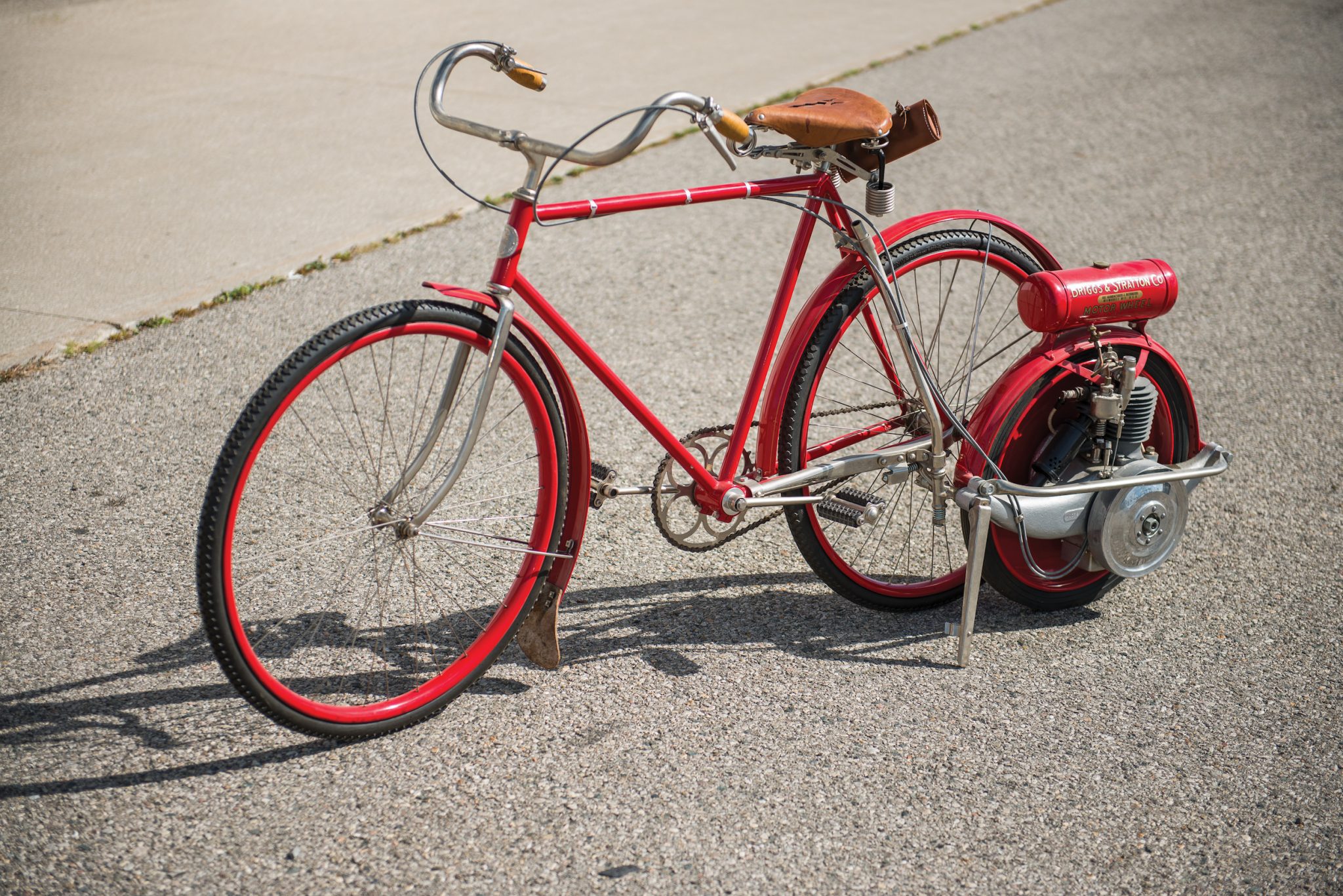 Published by Ben Branch - September 20th 2017
Related Posts
The 21st Century: Autos and All That Traffic – A 1969 Film By Walter Cronkite