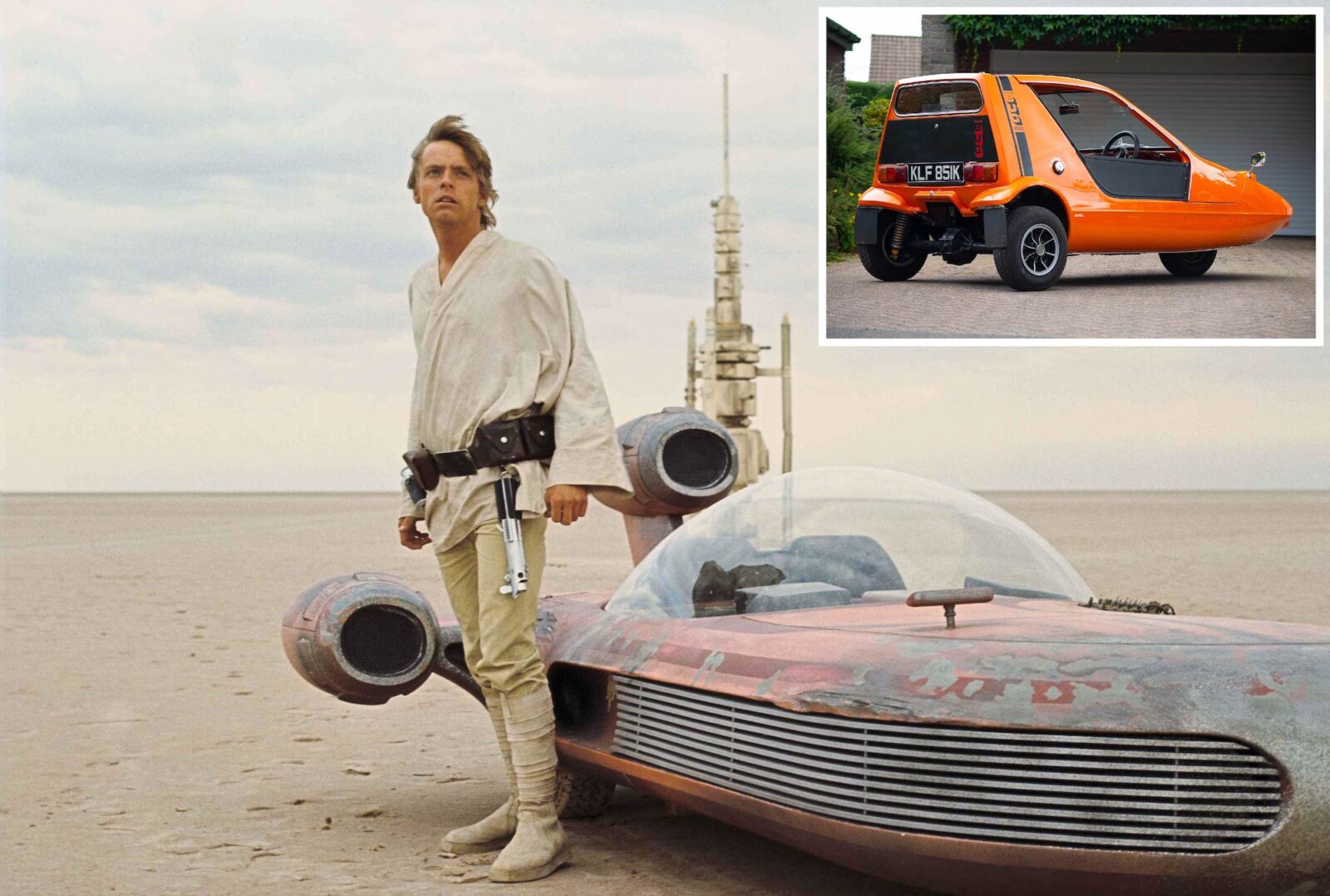 Although you may be looking at the car pictured above and wondering what it is, you almost certainly have seen one before. Well you’ve seen a vehicle based on it at least, it was a Bond Bug that gave its chassis and running gear to the vehicle that would become Luke Skywalker’s Landspeeder in the 1977 film Star Wars.

The Bond Bug is a two-seat, three-wheeled British automobile that used the wedge-shaped styling of the cutting edge supercars of the early 1970s – like the Lamborghini Countach, but without the power prestige, handling, or good-looks.

There can be little doubt that the Bond Bug 700ES is one of the most unusual sports cars of all time. The 700ES was the top-of-the-line sorting version of the curious looking Bug that was capable of up to 76 mph (122 km/h), though you’d have to be a braver man than me to try it.

When people see the Bond Bug for the first time they often think it’s a one-off build, perhaps a prop car for a movie that was used for transport in an underground lair belonging to a James Bond villain.

Above Video: The Landspeeder being driven by Luke Skywalker in the original Star Wars film.

The truth of the matter is that it’s a fully-fledged production car of which 2,270 were made between 1970 and 1974. The first designs for the car that would become the Bug were made by Tom Karen of Ogle Design all the way back in 1964, it was to be named the Reliant Rogue, however Reliant felt that such an outlandish design might hurt their brand identity.

Reliant bought fellow British automaker Bond Cars Ltd in 1969, this gave them a “sub marque” of sorts that they could use to produce the sporty Reliant Rogue under a new name with some minor styling adjustments – this is the car that would become the Bond Bug.

Reliant cars were largely known as quirky and inexpensive vehicles used by blue-collar workers and small companies like Trotters Independent Traders who needed to keep fleet costs low. The new Bond Bug turned this all on its head, it was a fast-looking, dangerous sports car with modern styling and affordable price tag.

As with almost all of Reliant’s automobile offerings, the Bond Bug has a fiberglass body and a steel ladder chassis with one wheel at the front and two at the back. The engine is mounted up front over the centerline of the car, and there are two seats with a central tunnel between them

Unusually the Bond Bug’s body opens up vertically to allow people to get in and out, one of very few production cars in history to use this system, and side screens are used in place of more traditional doors. 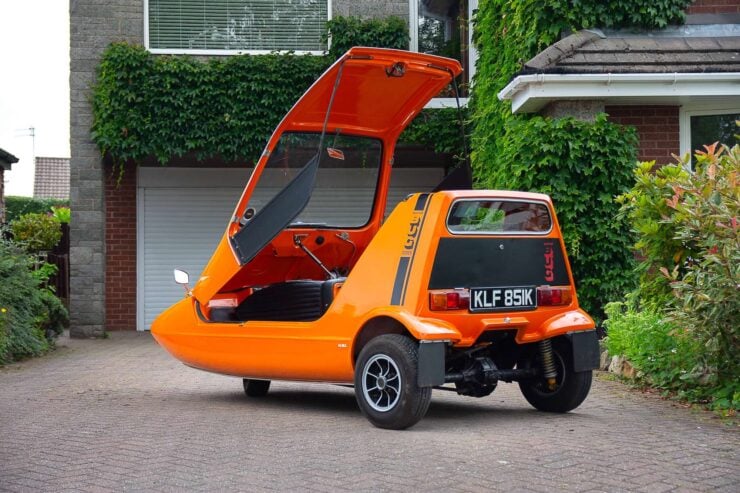 The Bug has a roof that opens up to allow people to get in and out. The major issue was this design is that it would also let in rain and snow.

When it was released in 1970 the Bug was offered with a 700cc Reliant light-alloy 4-cylinder engine producing 29 bhp. Power was sent back through a 4-speed transmission to the live axle rear end.

When the 700ES model was introduced it featured an uprated engine with a new cylinder head and a higher compression ratio – up to 8.4:1 from the original 7.35:1.

Both horsepower and torque were improved with the former figure rising to 31 bhp. A more powerful 750cc version of this engine would be used later in the production run, giving another boost to both torque and horsepower.

The 700ES model also had improved seats, more padding over the engine hatch, an ashtray, mudflats, a front bumper, and a spare wheel.

The Bond Bug tips the scales at just 868 lbs (394 kgs) and so despite the relatively modest engine output the car can reach 76 mph (122 km/h), faster than the British national speed limit at the time which had been set to 70 mph.

The End And A New Beginning

The Bug left production in 1974 however Reliant were experimenting with a four-wheeled version of the car as they believed it would have wider appeal and may enjoy strong sales.

Lotus were doing very well selling their own fiberglass-bodied sports cars, and Reliant realized they may be able to capitalize on the lower end of that same market.

Multiple four-wheeled Bond Bugs were made and a new version of the engine was in development for the model, engineered by Formula 1 team BRM with a swept capacity of 850cc, an overhead cam, and twin SU carburetors producing 70 bhp. 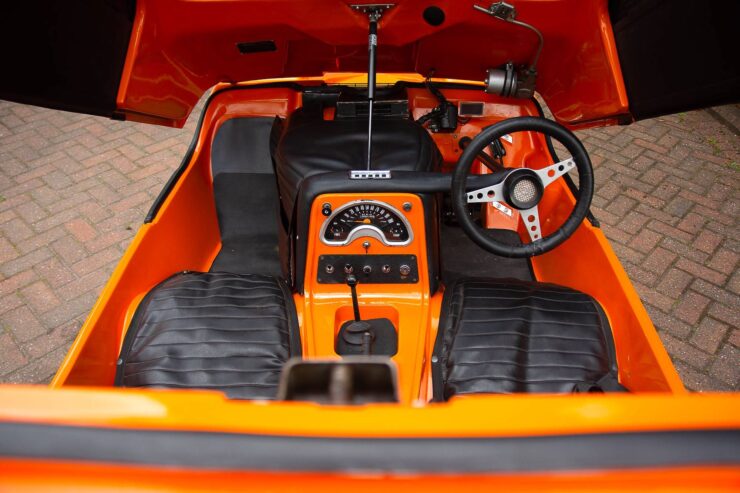 The car has seating for two, the engine is mounted behind the instruments in its own compartment and it’s accessed via a hatch.

Sadly we’ll never know how well this four-wheeled Bond Bug may have sold as it was never given the green light for production.

This isn’t the end of the road for the concept however, in the 1990s the Webster Motor Company bought the moulds and rights to the Bug design and created their own four-wheeled version called the Webster Bug which they sold as a kit car, only 30 or so are thought to have been produced.

The most famous example of the Bond Bug was the aforementioned Landspeeder from Star Wars (1977) driven by Luke Skywalker on Tatooine. The Landspeeder was developed by the same man who designed the Bug – Tom Karen of Ogle Design. Interestingly, mirrors were fitted along each side of the Landspeeder at a slight downward angle to give the illusion that the vehicle was floating.

The Bond Bug 700ES you see here is a 1972 model that’s currently for sale on Car and Classic in Britain. It’s one of just 99 such vehicles still on UK roads and in the early 2000’s the car received an extensive restoration to original specification.

The car is now an award winning example of the Bug that’s been displayed at local and national car meets, and it’s only covered 300 miles since the most recent purchase in 2012.

If you’d like to read more about it or register to bid you can click here to visit the listing, it’s being auctioned live at the time of writing, with the bidding at £6,001 with over 5 days remaining. 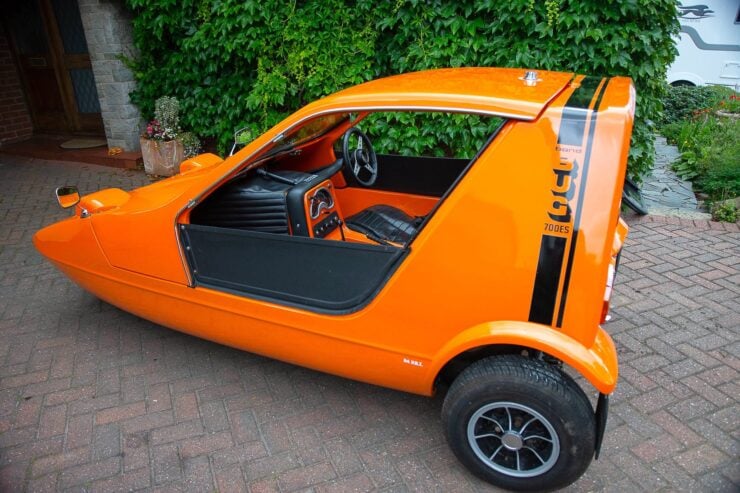 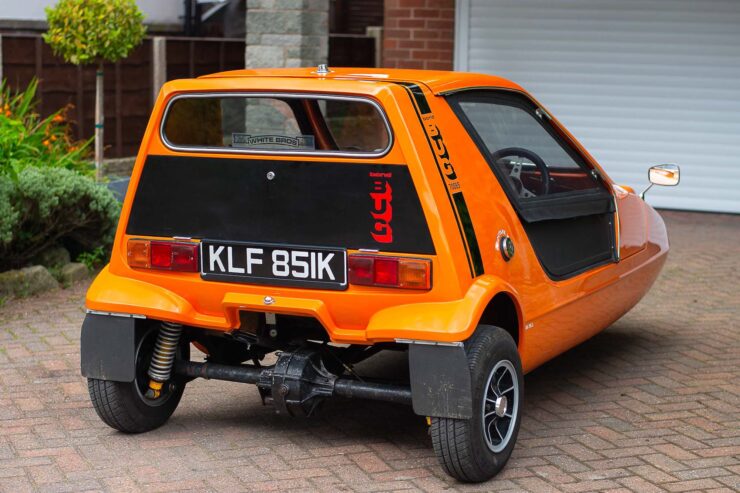 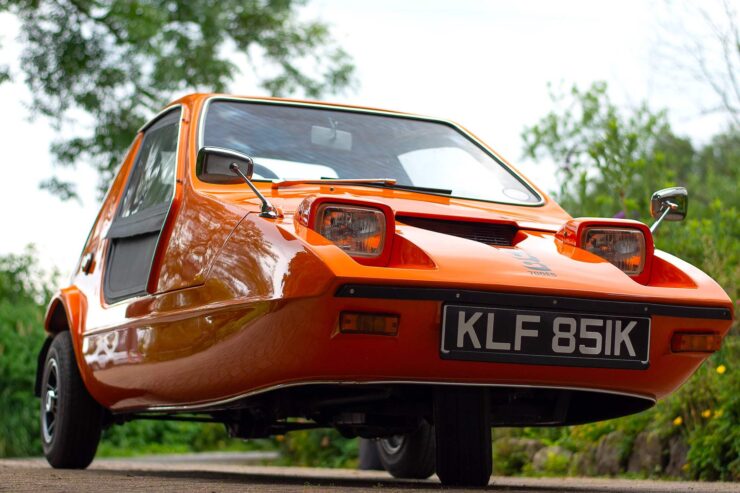 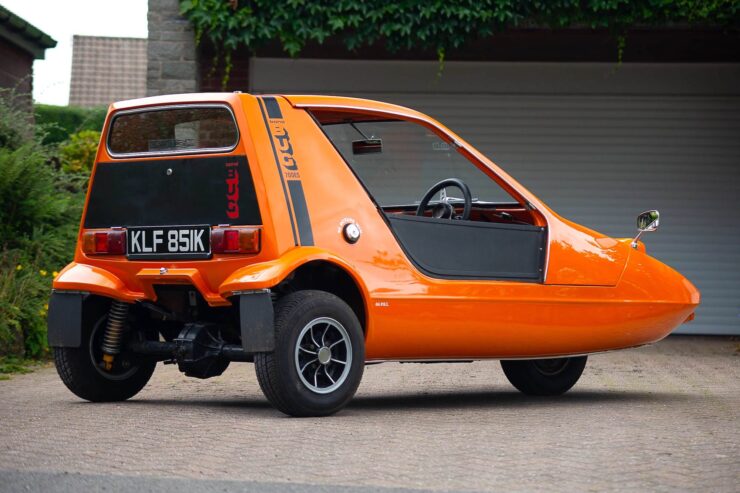 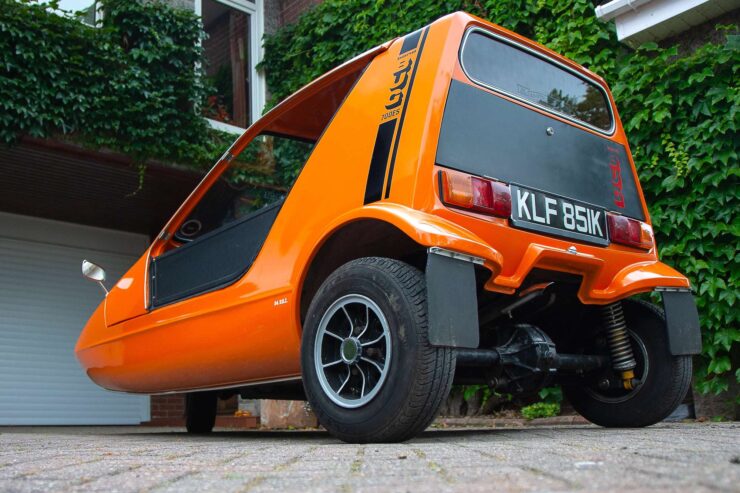 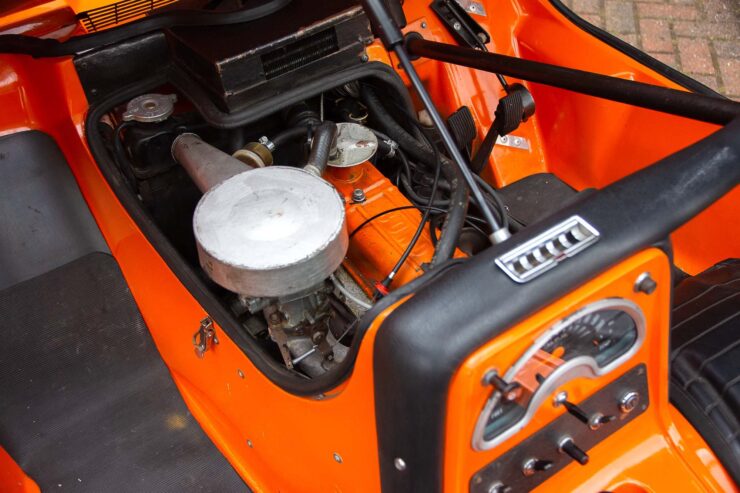 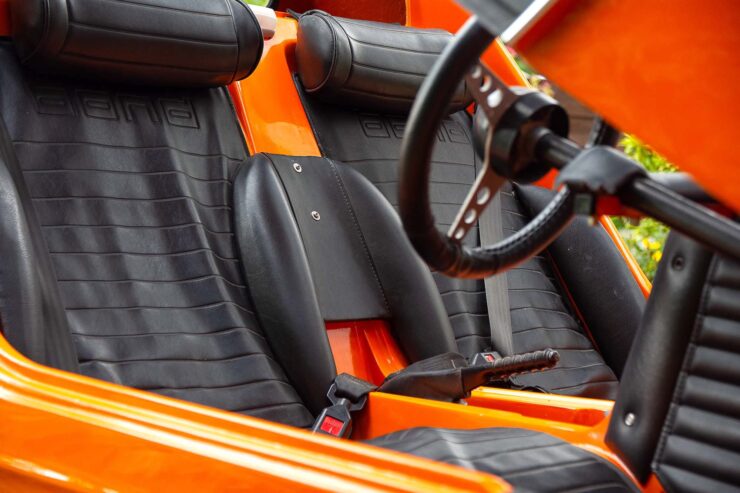 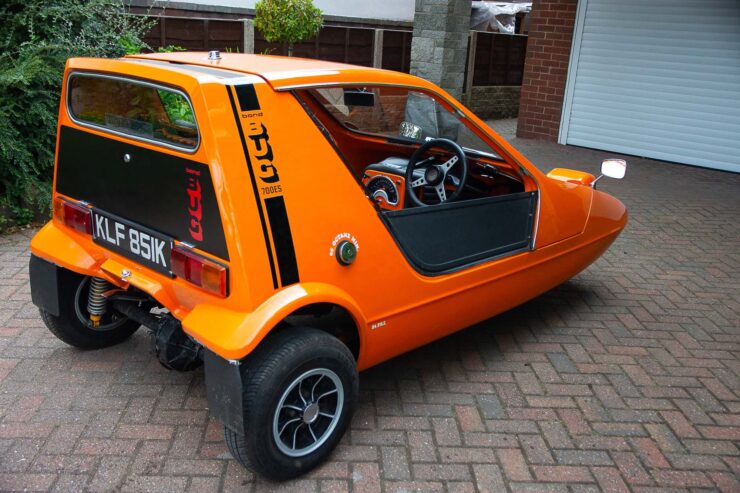 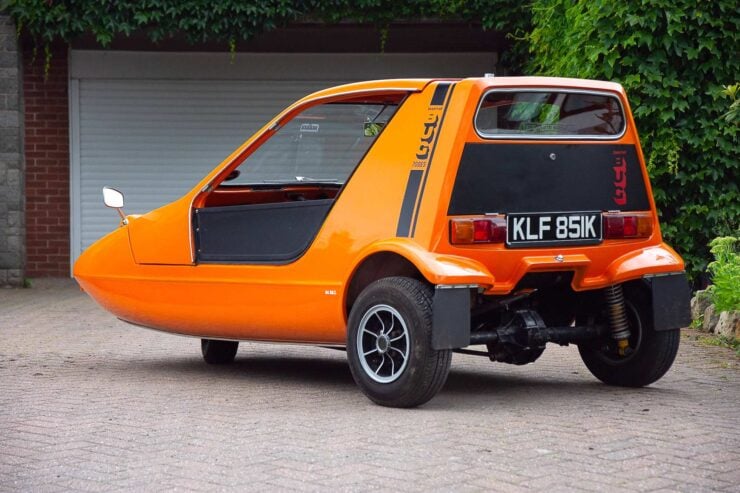 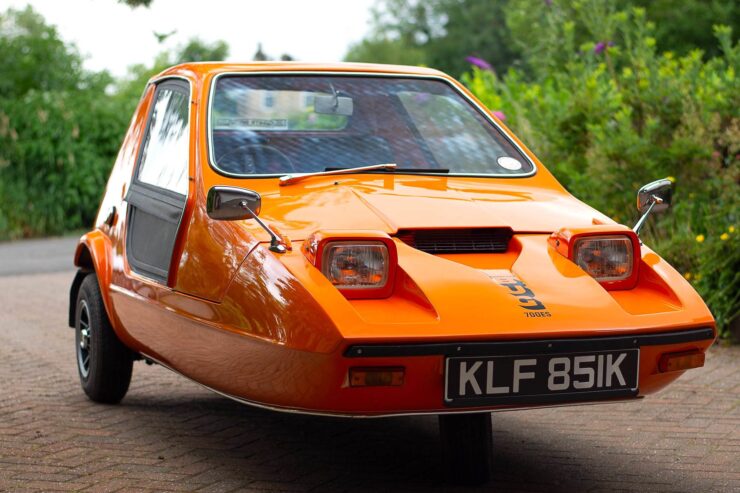 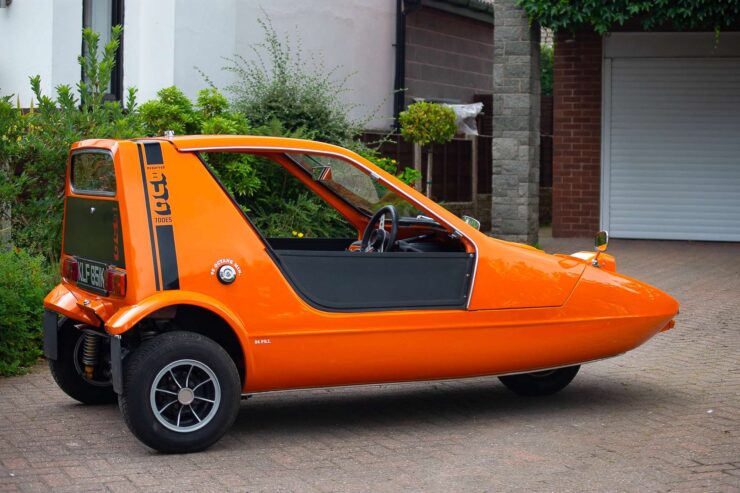